By: amanico : November 21st, 2020-09:08
The Alpine Renault A 110 is one of these cars which are part of the Automotive Legends, and not only for the French People.
Born in 1962, and produced for 16 years, this sportscar à la française attended some famous Rallyes, such as the Monte Carlo, and was a winner. It was made in a bit more than 7000 pieces.
The recipe was simple: An ordinary motor, from Renault, and a light body, a bit like what Lotus did.
The character of the car? Agile, direct, very funny to drive even if it requires some skills in extreme conditions.
Here is a A 110 1300 I could test drive some years ago. An unforgettable experience, in the roads near Avignon. 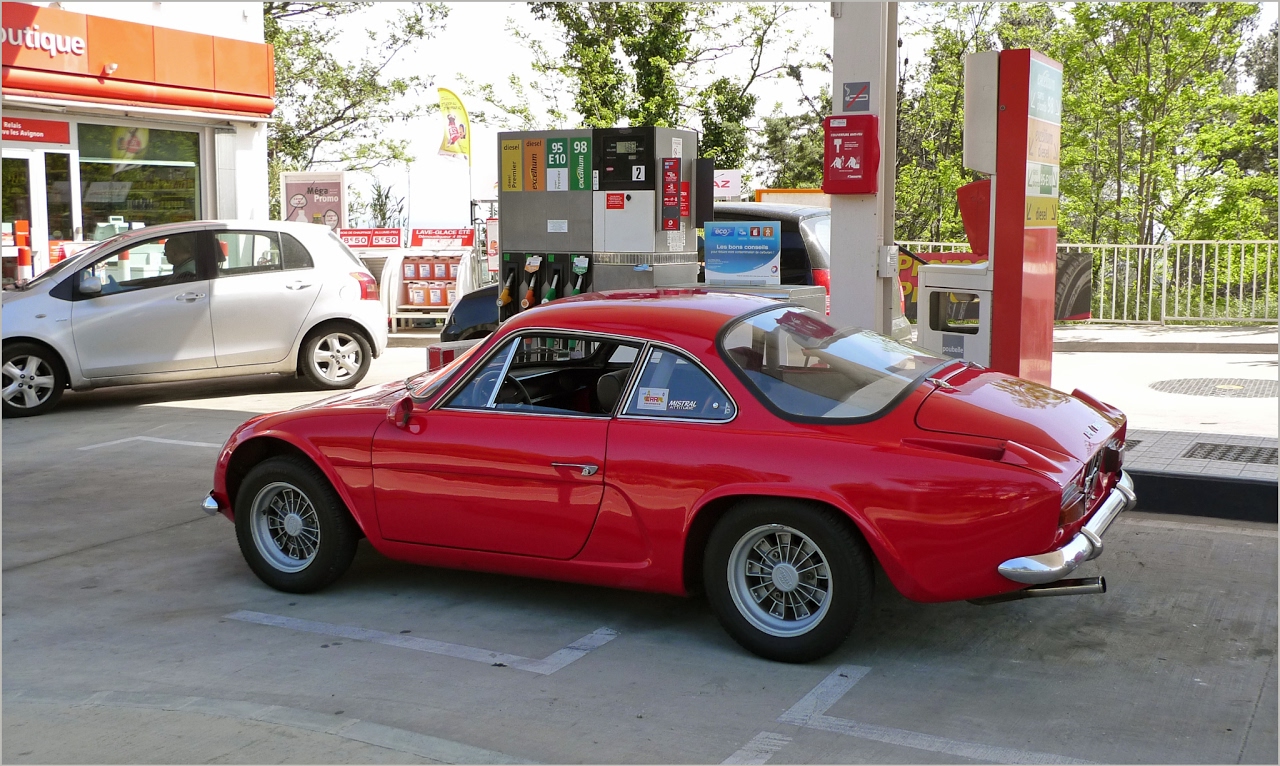 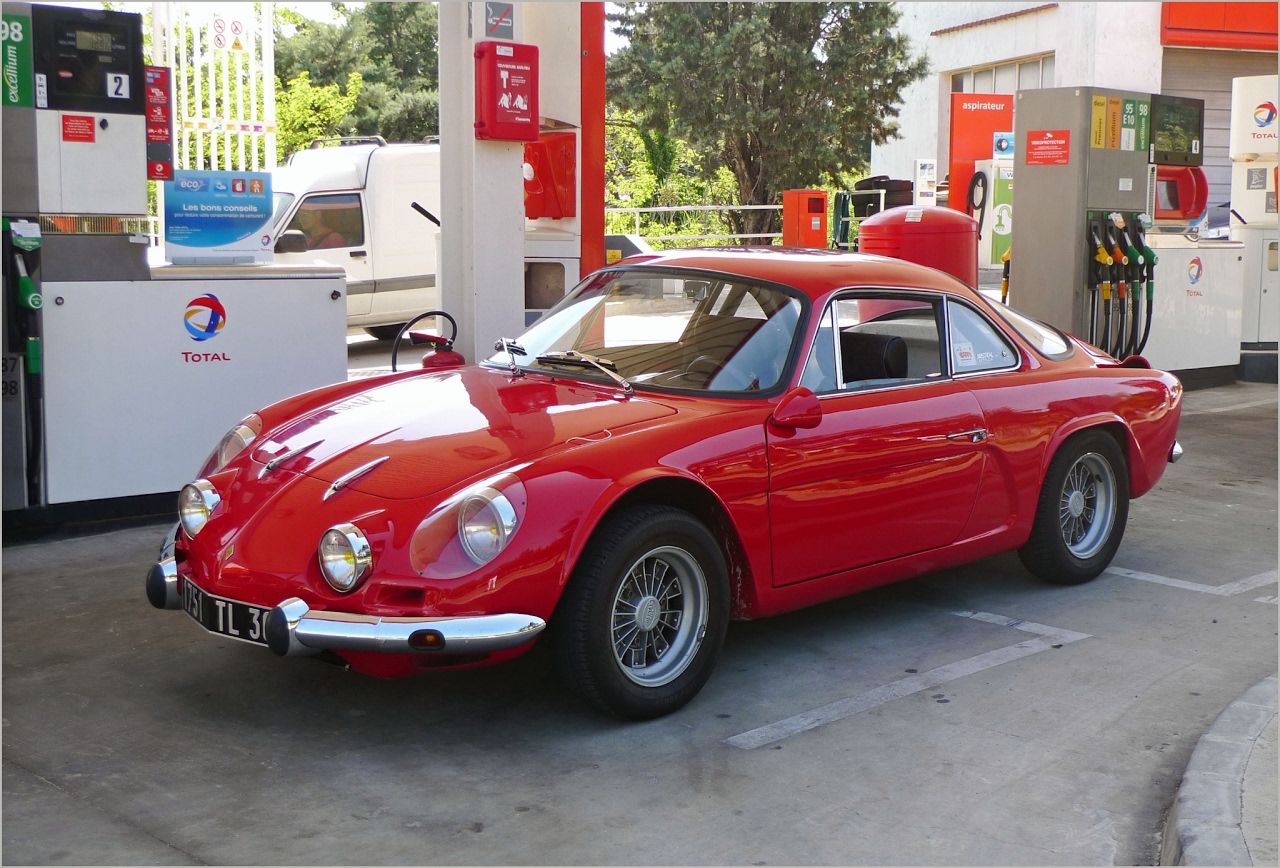 In 2017, Alpine Renaut resuscitated the A 110. Modernized, for sure, but the spirit, in the aesthetics and the mechanics, is still here, well respected. 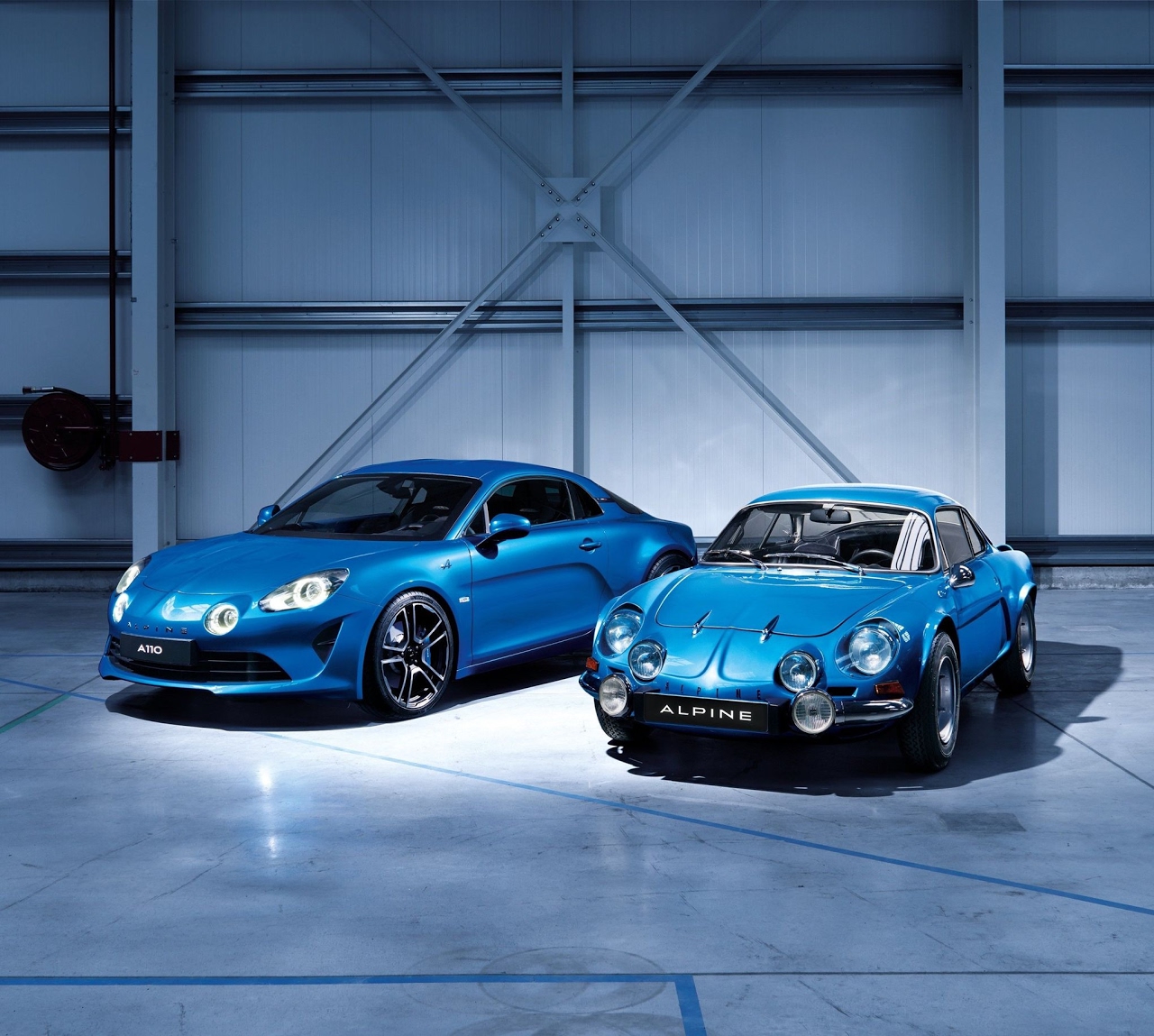 Since its unveiling, I wanted to test drive one, with some fear: Will I be disappointed? Like it is the case for watches, when you touch to an icon, when you want to revisit it, it is quite risky.
I could test one, in September, this year. And I can already confess that I was thrilled, puzzled by this experience.
Basically, there are three versions, one normal, the A 110 Pure, a tad more comfortable one, the Legende, and the sporty version, the A 110 S.
The A 110 Pure weights 1098 Kilos and its 1.8 liter engine offers 252 HP for a torque of 320 Nm.
The A 110 PURE: 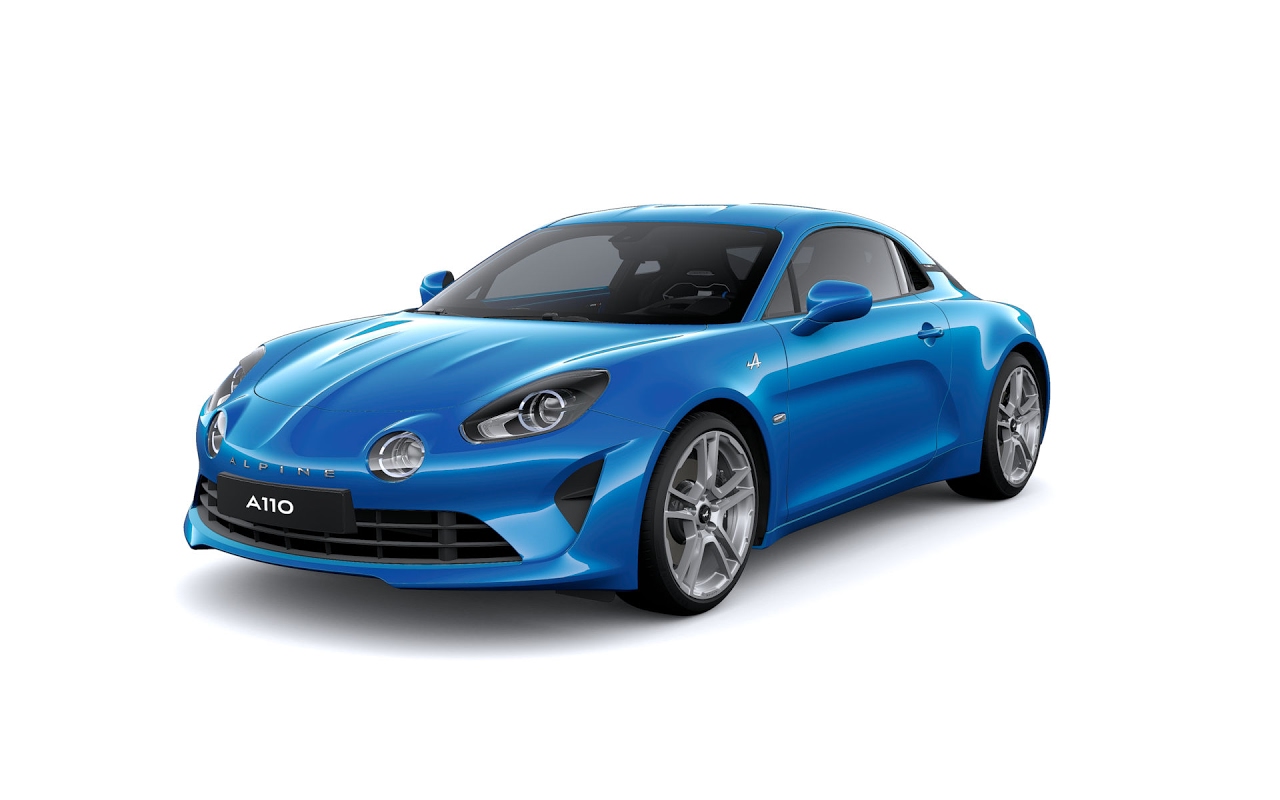 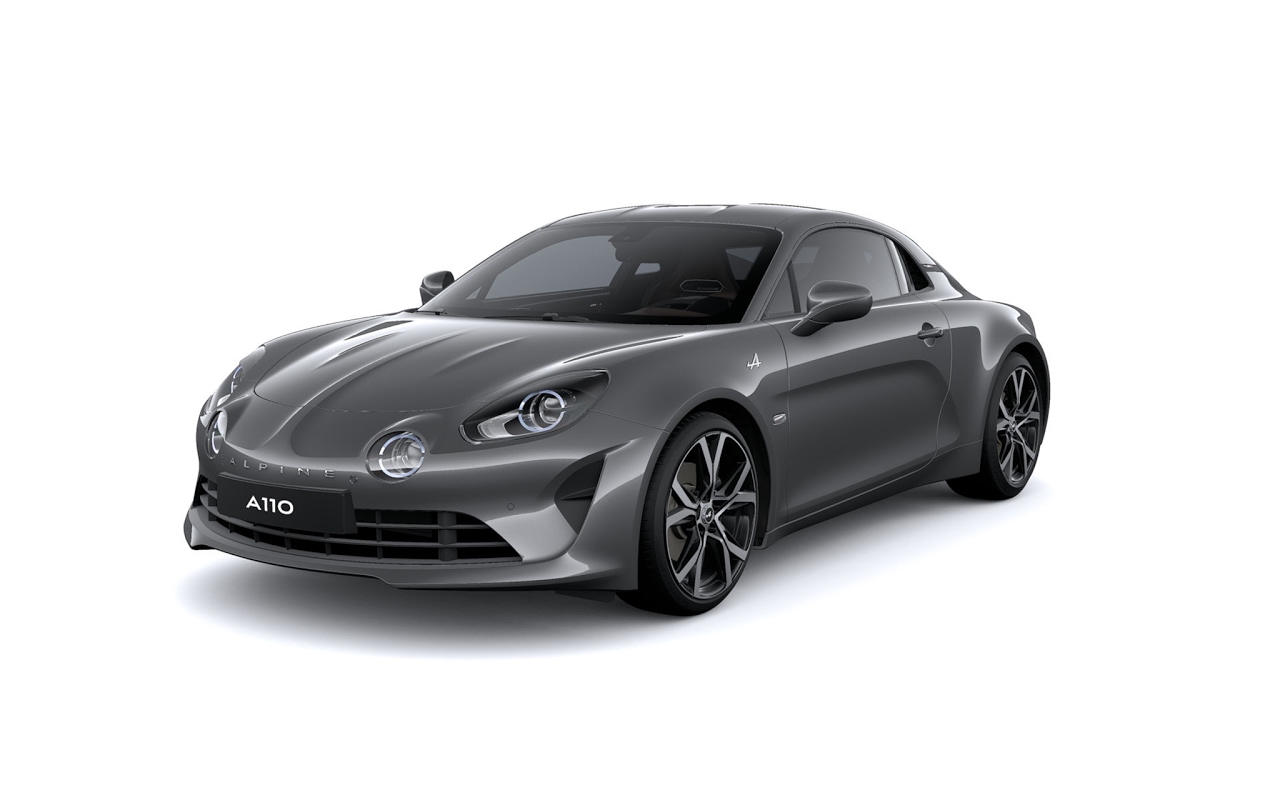 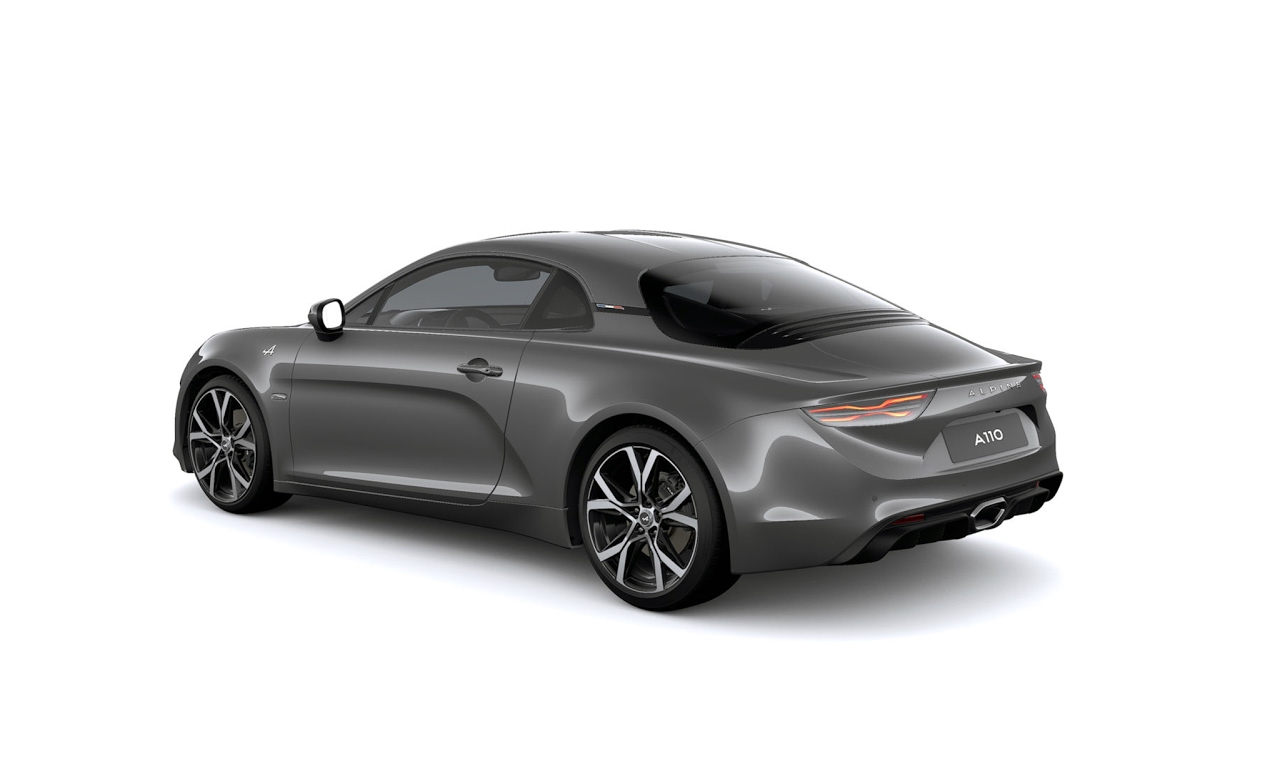 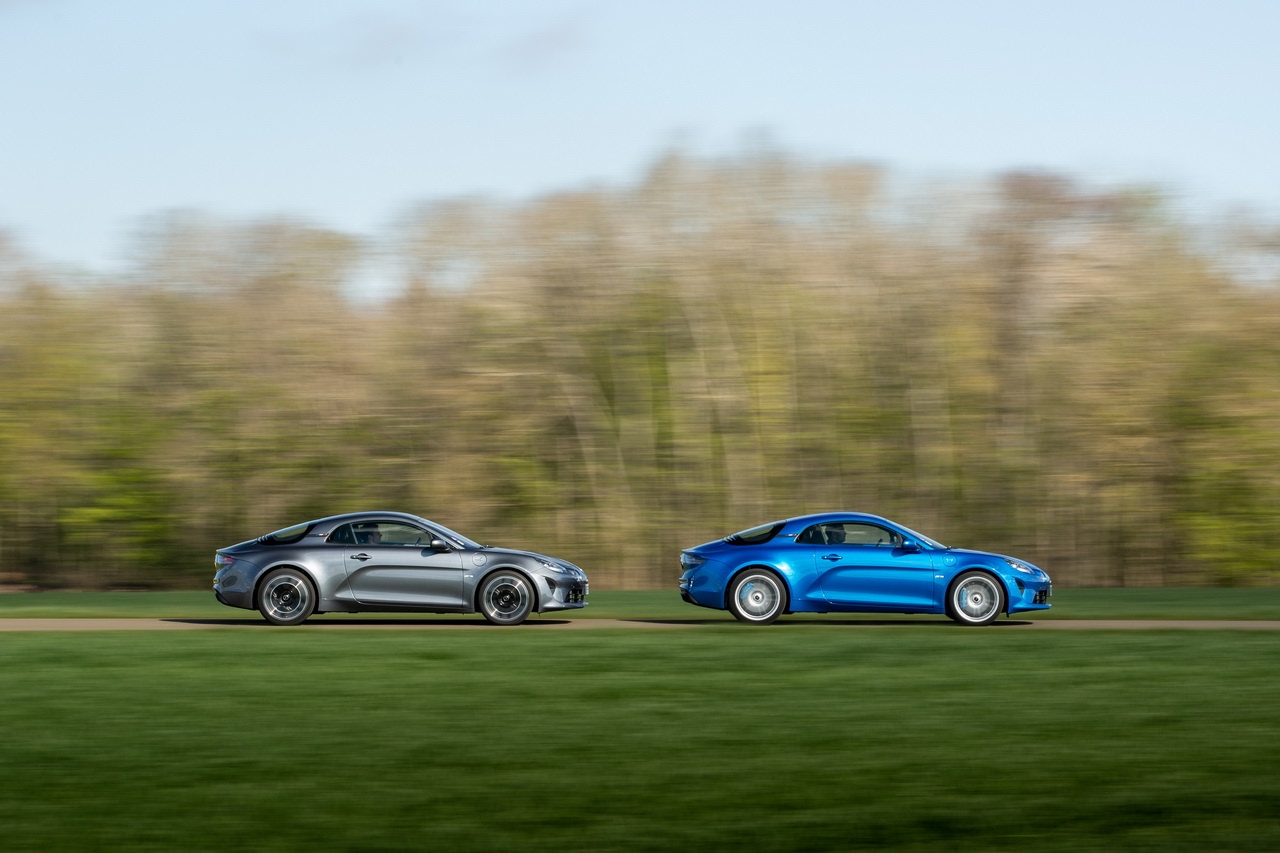 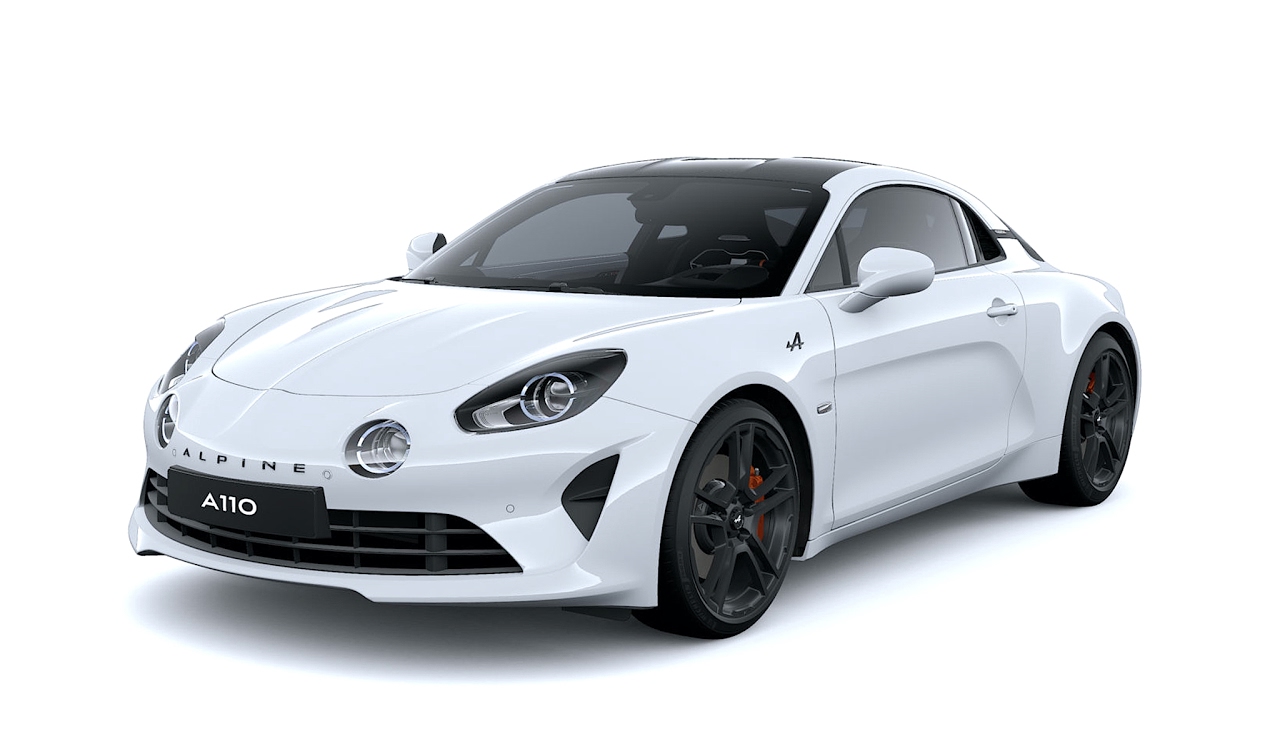 The maxi speed is 250 Kilometers per hour for the Pure, 260 for the S. The accelerations are very close, with 4, 5 secs from 0 to 100 Km /h versus 4, 4 secs for the S, and the 1 000 meters are done in 23, 2 seconds for the Pure, versus 22, 8 seconds for the S.
In both cases, you have an automatic gearbox with sequential mode, you can use normally, sport or track.
That's what they say on the paper. Now let's see what is the reality with the Legende, the version I tested, here in Grey: 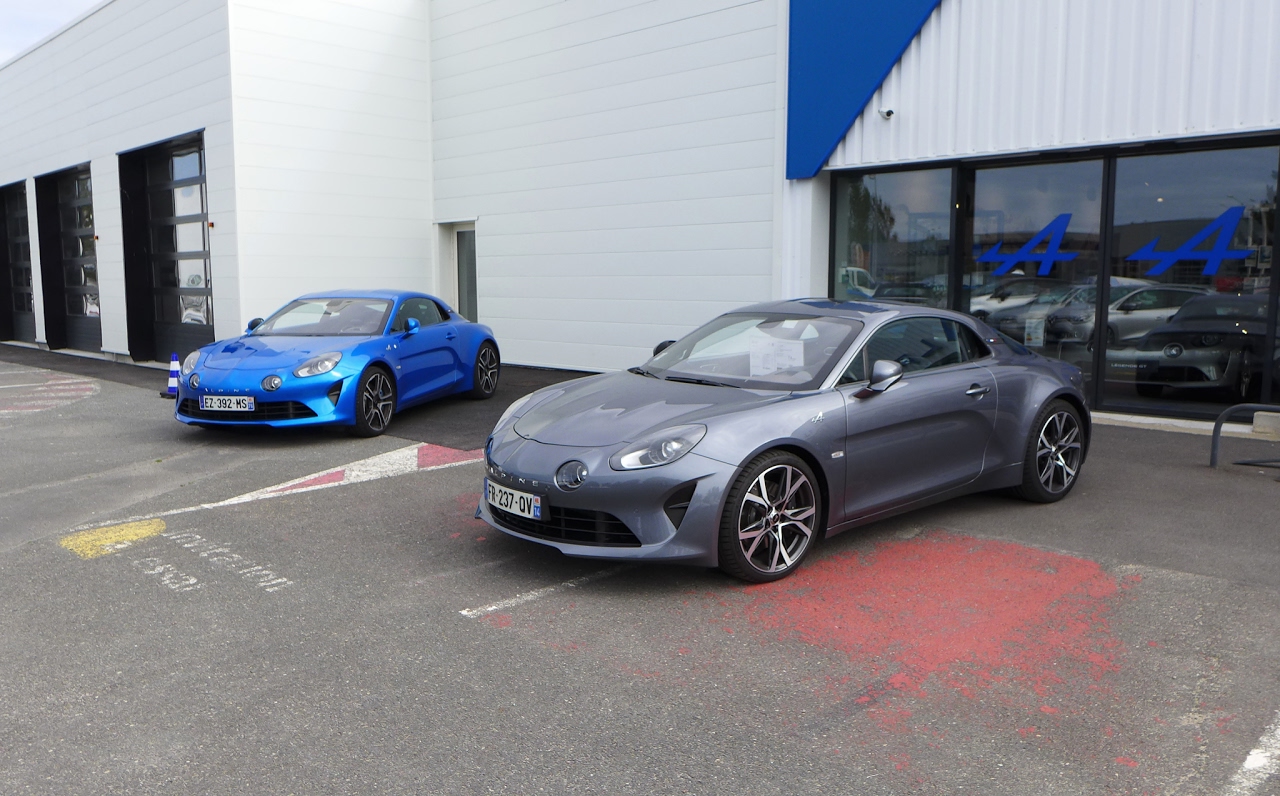 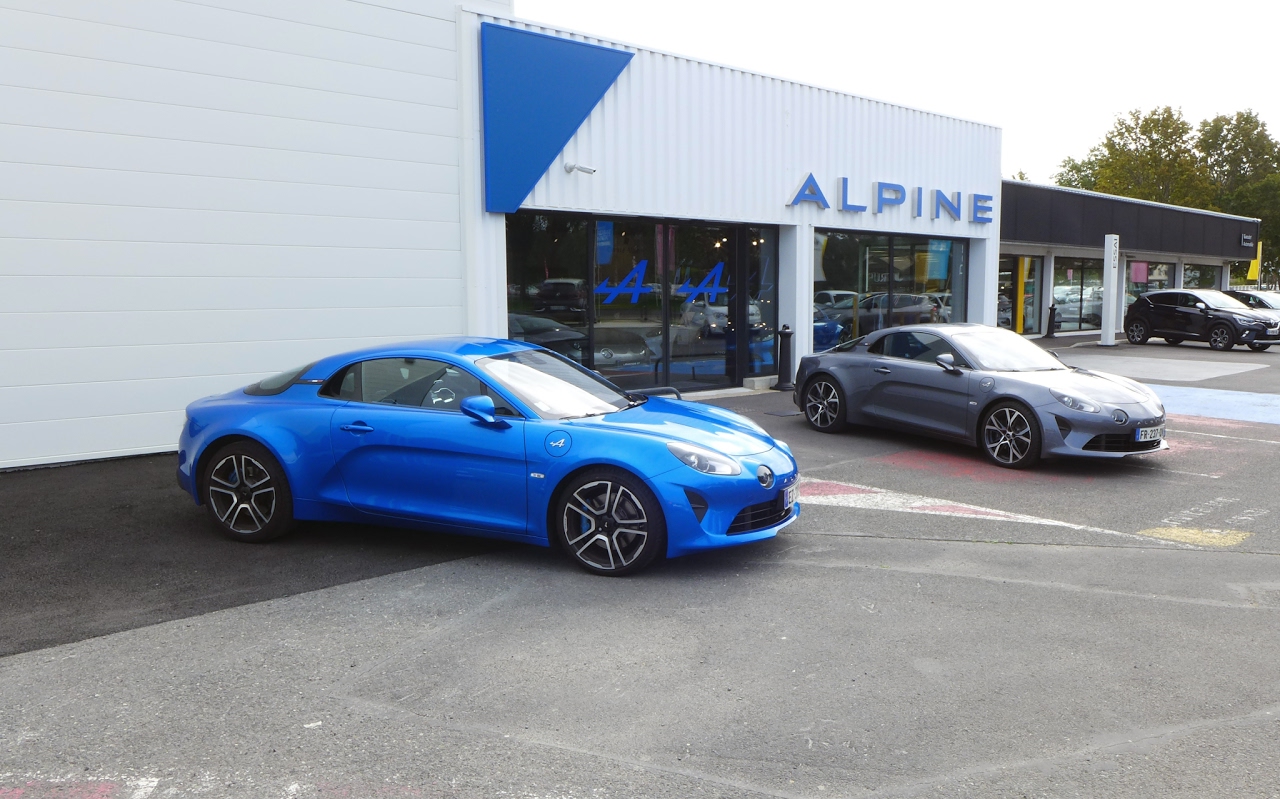 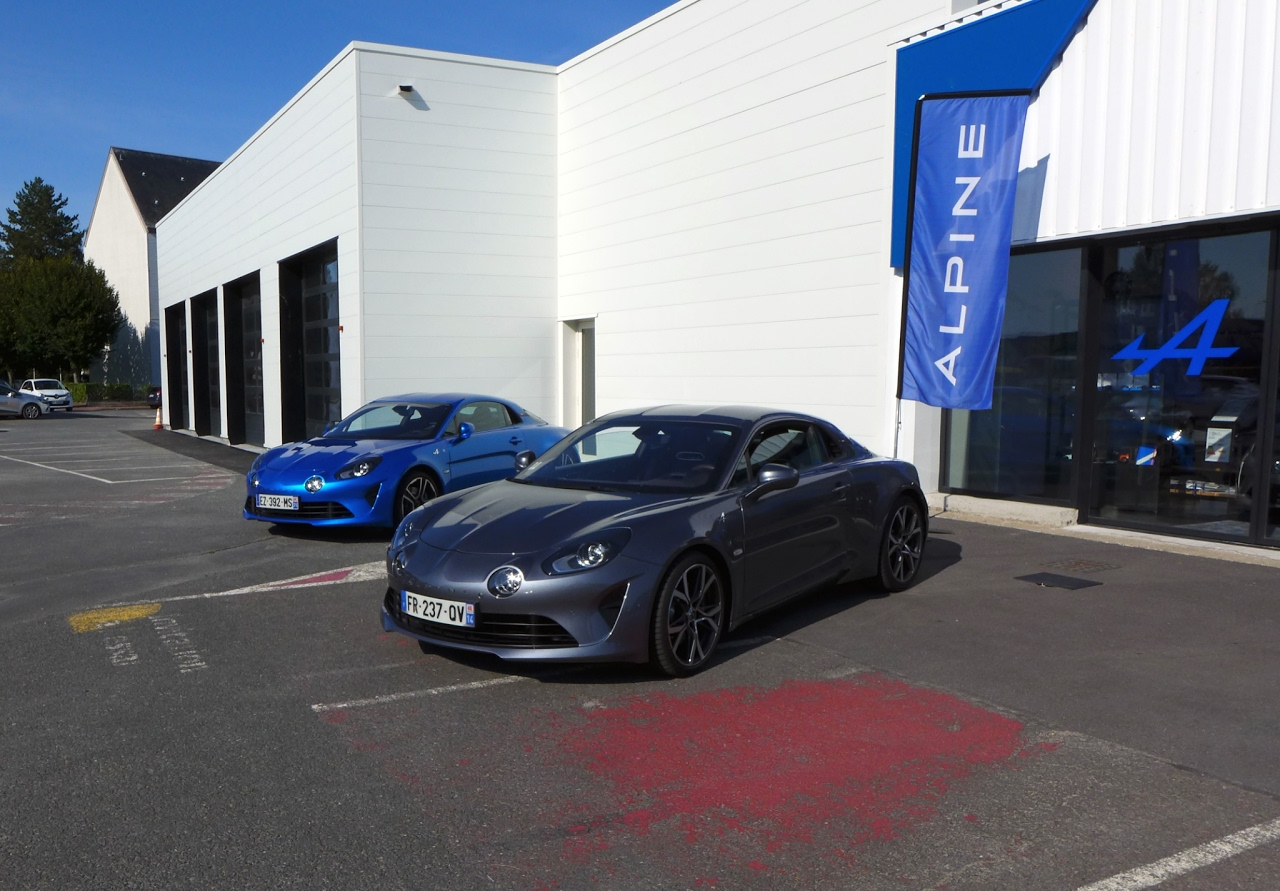 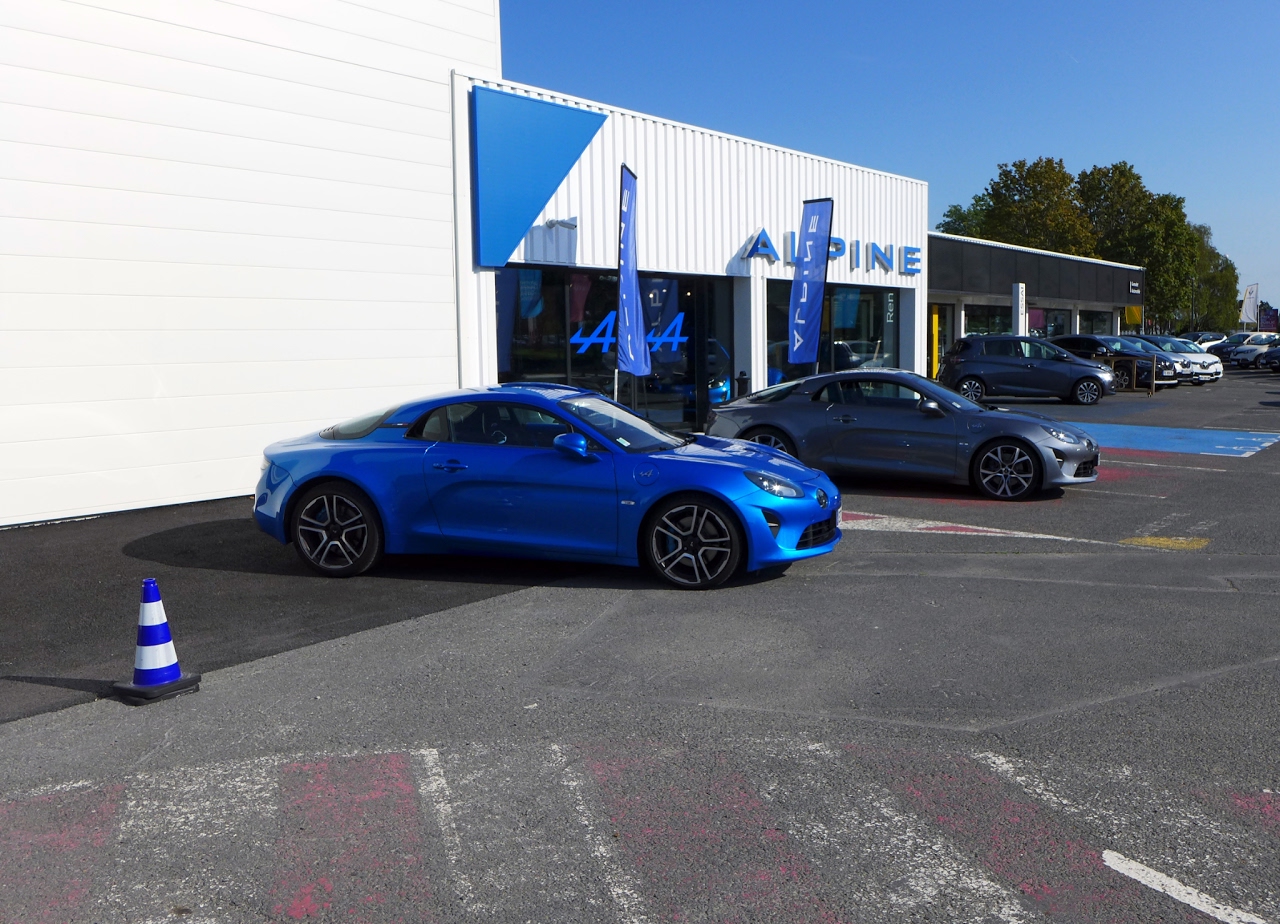 1/ THE FIRST CONTACT WITH THE CAR:
Those who are used to modern cars will find the Alpine is a small and low car, which is what it is. The A 110 is 4, 18 meters big, 1, 78 meter large and 1, 25 meter high, which will not disorient the Volvo P 1800 owner I am, as the Volvo has almost the same dimensions, only 23 centimeter bigger.
The proportions are very harmonious and the body is a model of sensuality, with its sweet curves. It is a reminder of the best cars from the 60's, early 70's, such as the original Alpine or the... Ferrari 246 Dino. Indeed, the A 110 always made me think of the Dino!   ( Credit picture on request ). 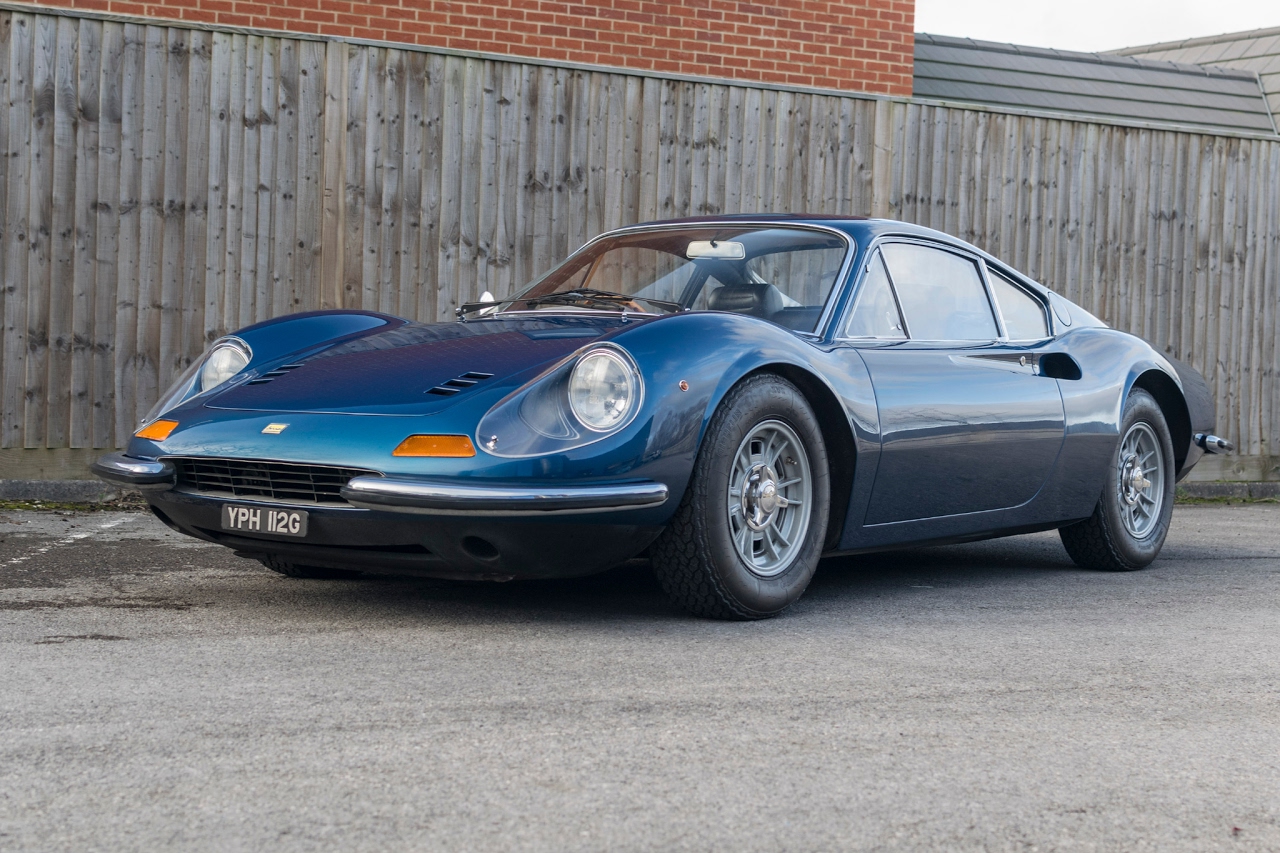 Inside, it is a pure pleasure for the senses, the perfume of a new car, the interior which makes you dive into the racing universe with its typical seats which you can set in depth, but not in inclination in the Pure ( the Alpine Service Center will do it for you ), the combination of instruments ( digital, alas ) of the dashboard, and the " palettes " on the steering wheel, without forgetting the aluminium pedals.
The Interior:
Here the Legende: 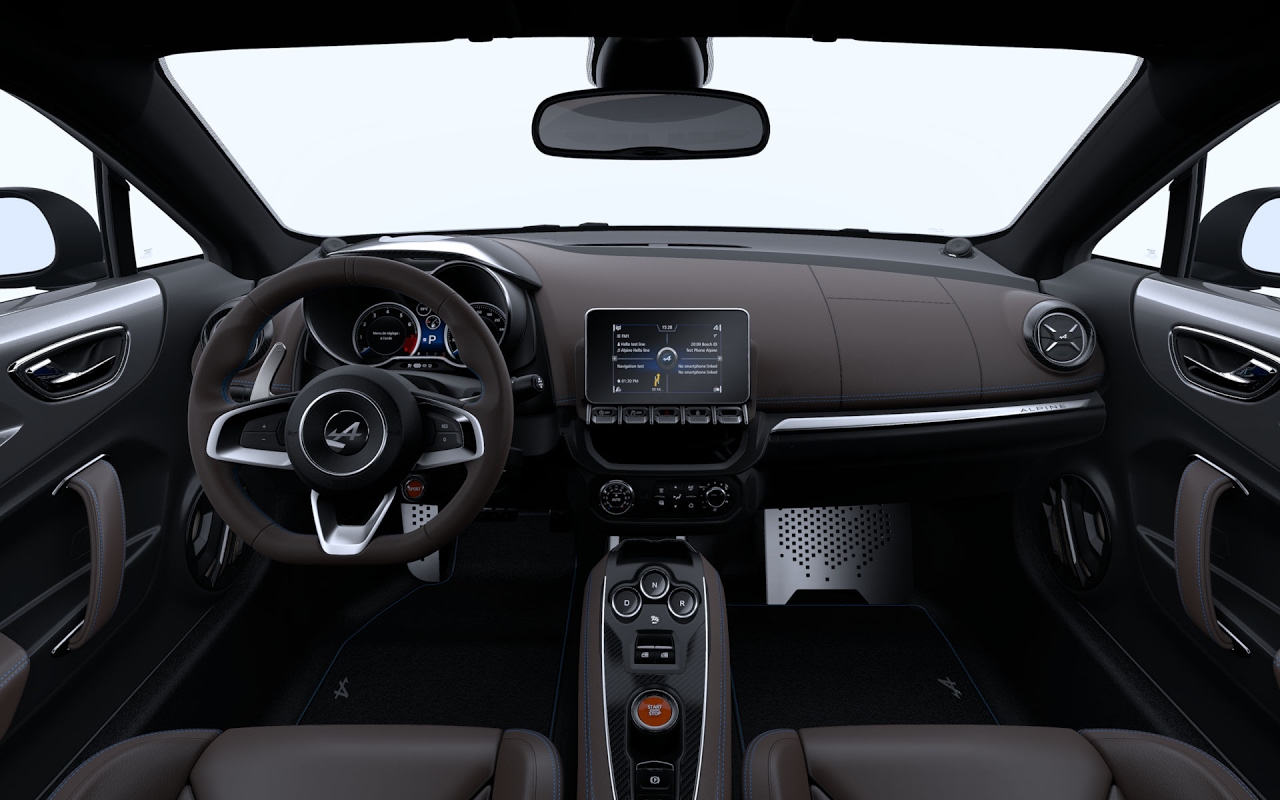 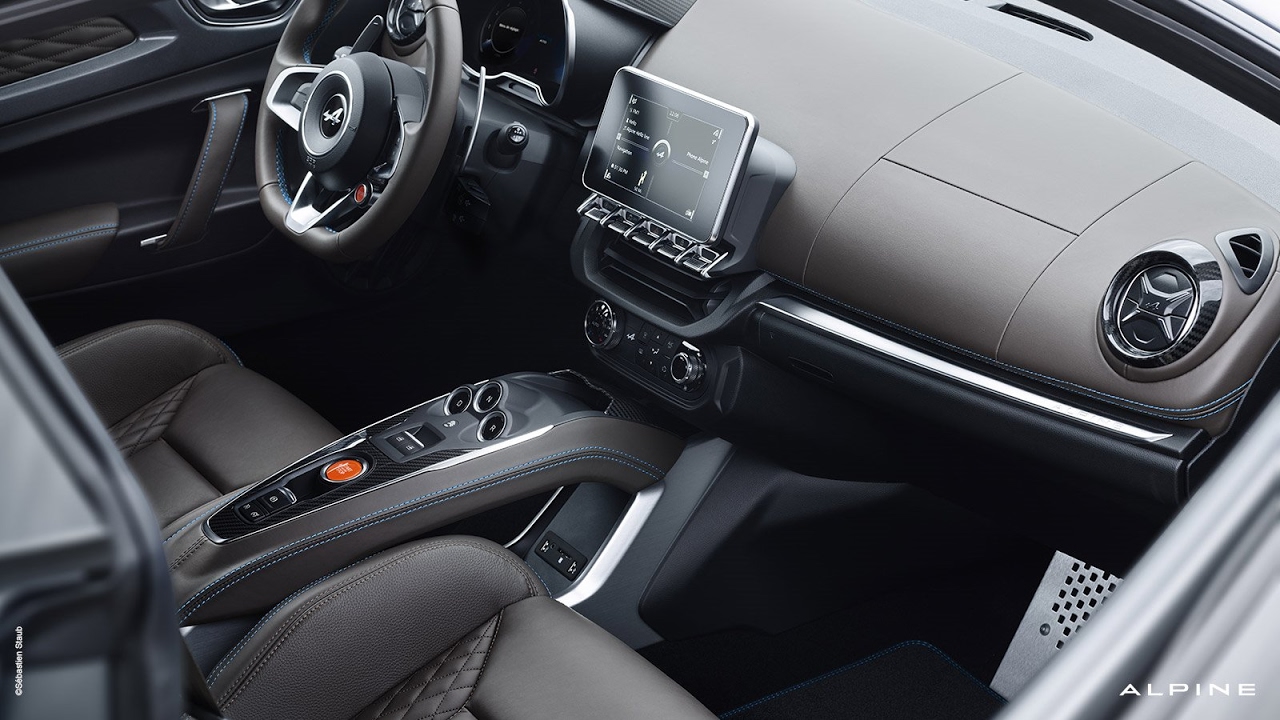 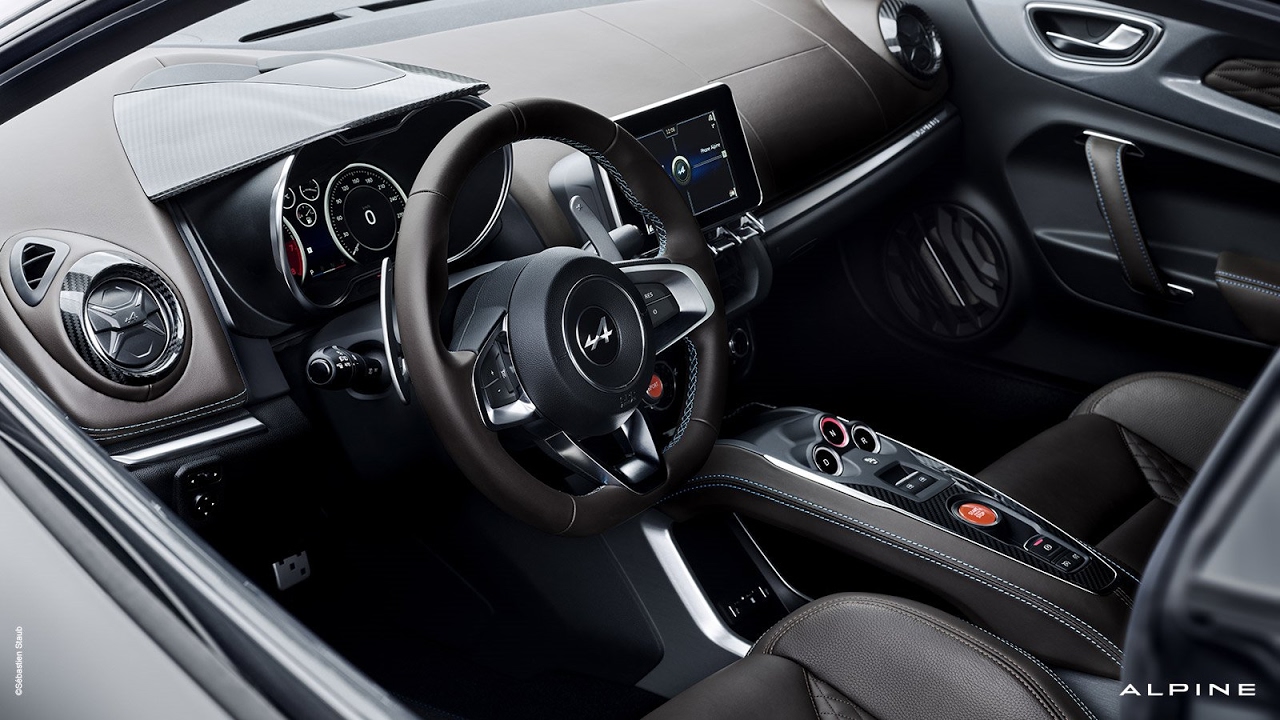 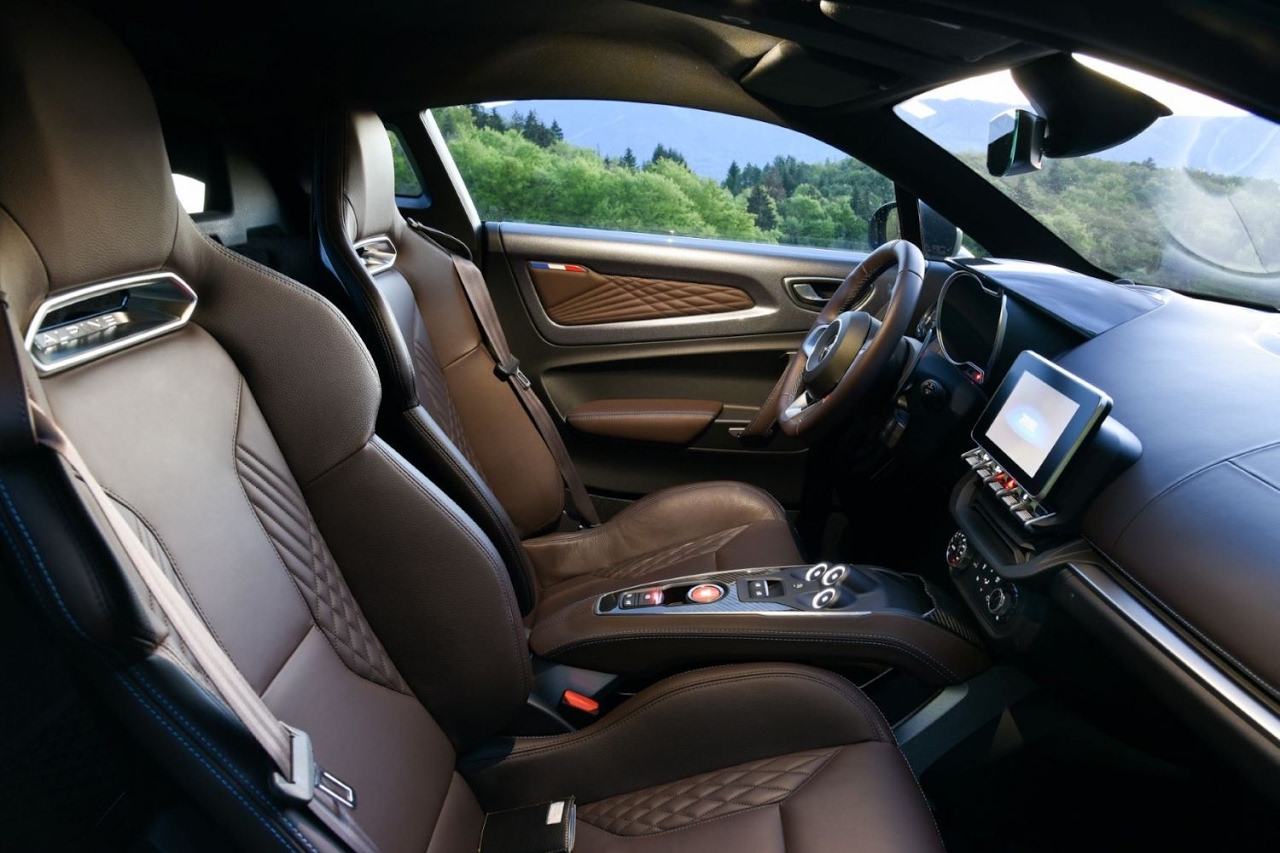 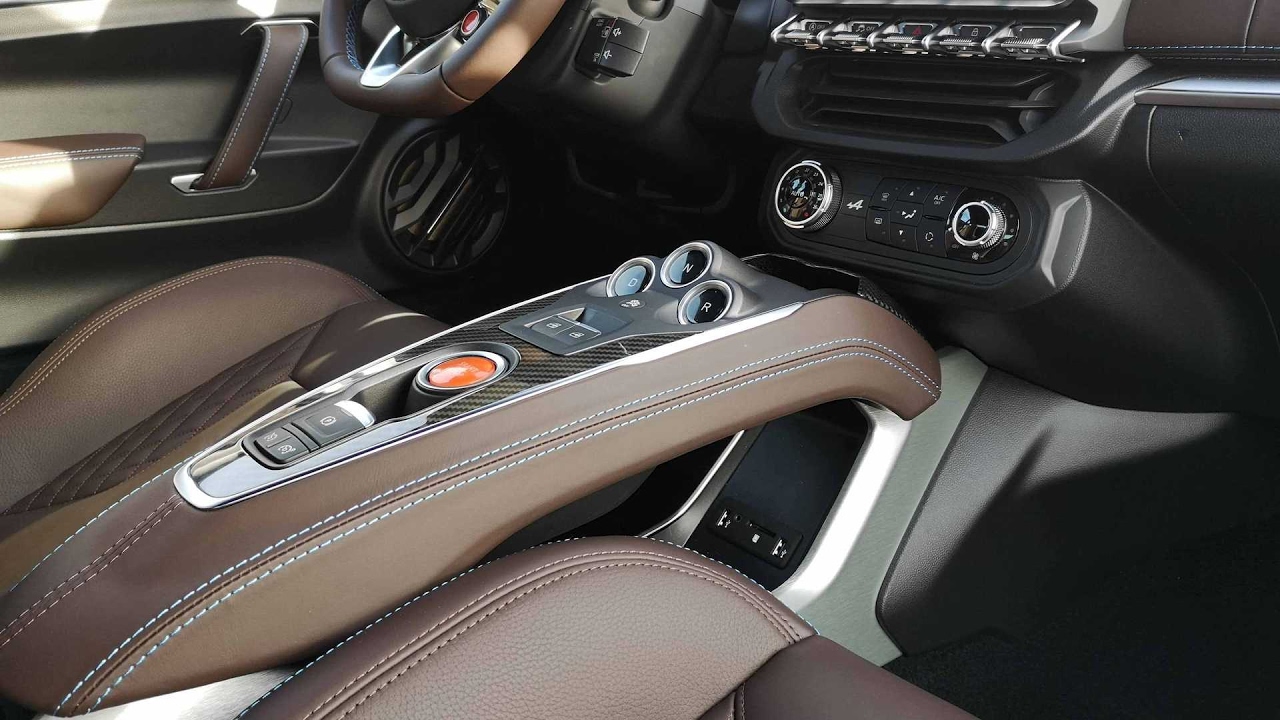 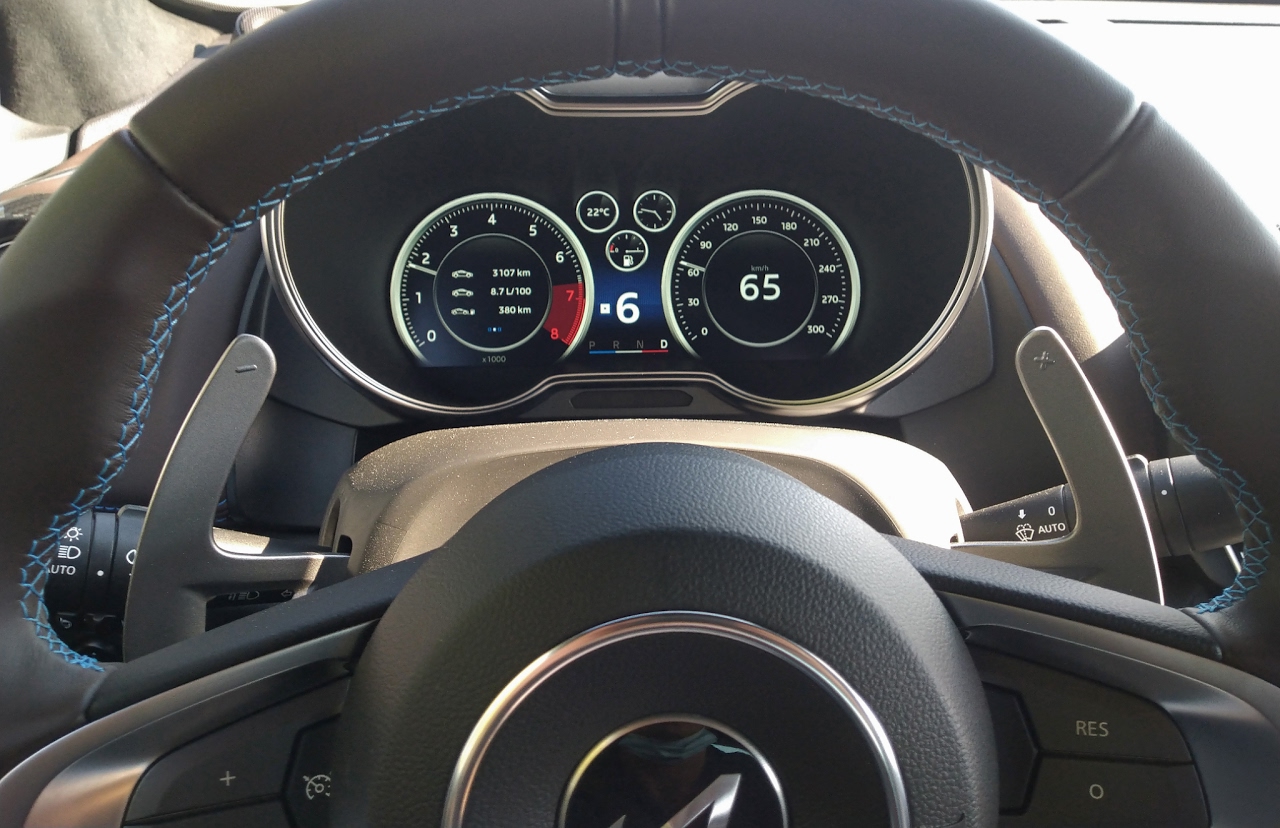 The Pure and the S for the comparison:
The Pure: 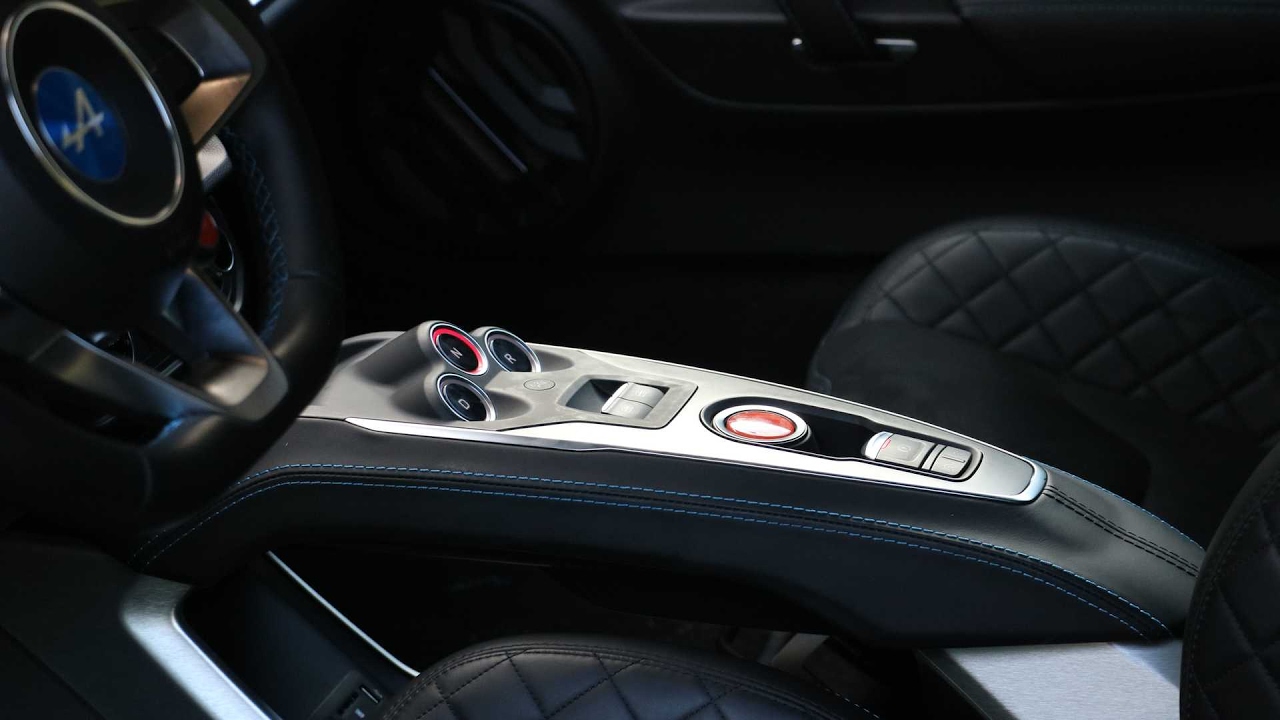 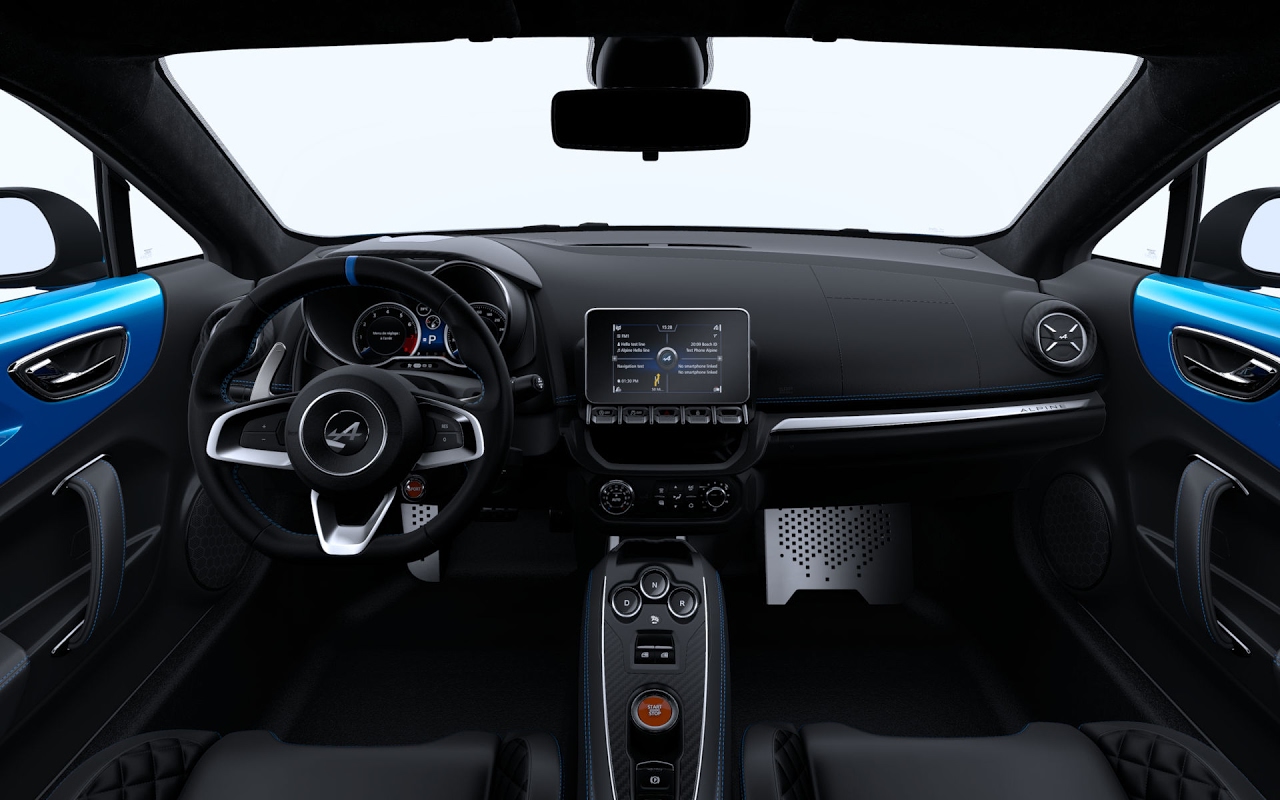 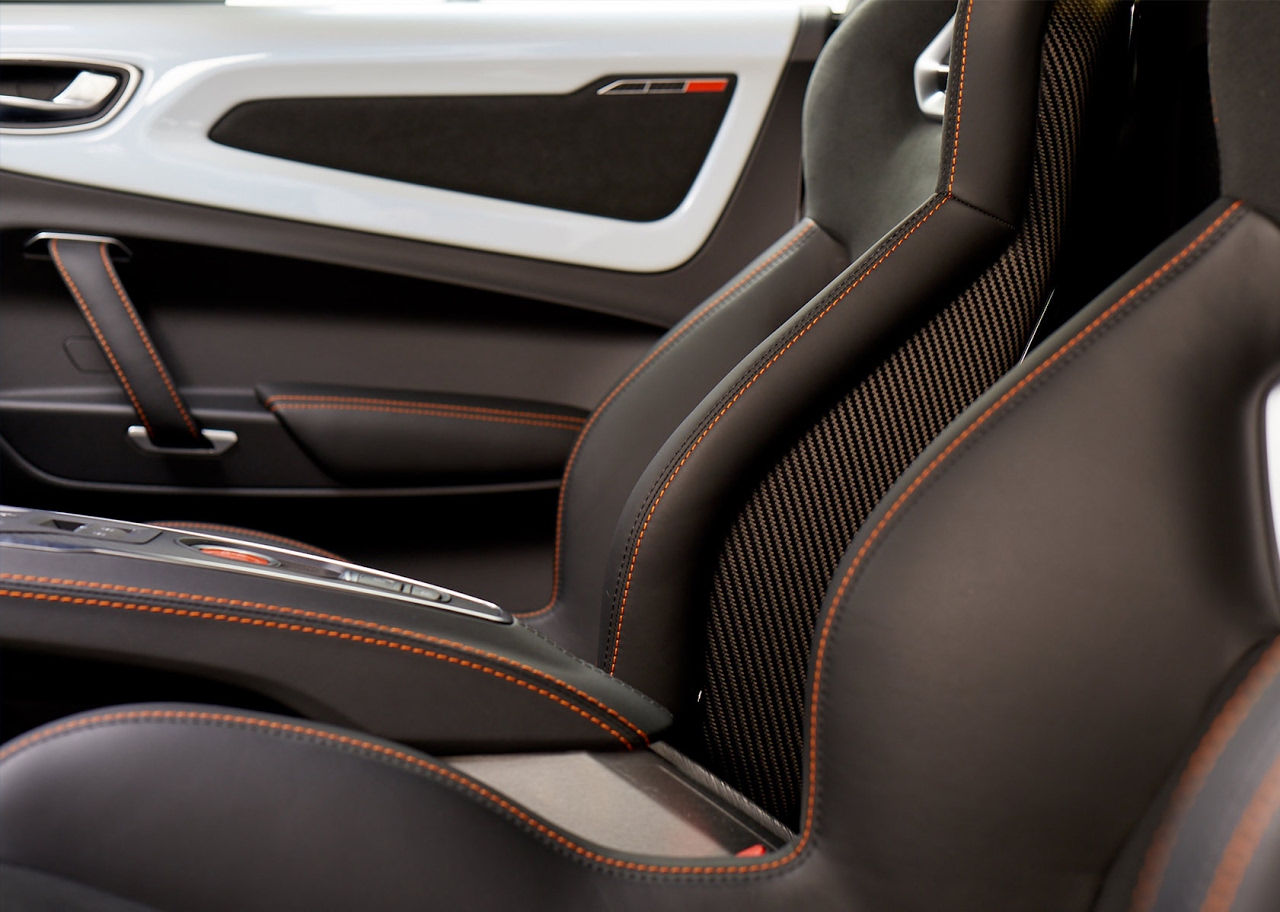 The seats are not only very nice, but also comfortable. Good point.
Bad point, there are some elements borrowed to some common Renault, like the Ferrari 246 Dino borrowed some parts to the... Fiat 500.
The Dashboard:
Now, start your engine... You just have to push on the button, on the central console.
The first notes coming from the exhaust of the engine are promising, in terms of fun.
2/ ON THE ROAD:
Once off the parking, I had some kilometers in the traffic, just the time to gently heat the engine and to get used to the car, and here we go...
The engine is incredible. It pushed endlessly, the gearbox is fast and reactive, and if you want to control it more accurately, you can always use the palettes, which is what I did.
The sound is terrific, too. Raging when you accelerate, and when you decelerate, you have some very cool bangings.
The chassis is very accurate as well as the direction. In the curves, it is a feast. The kingdom of this car is the curves, definitely.
In the straight lines, you have a lot of pleasure, and you feel the speed. This car is a bomb, and goes very fast in no time at all. Impressive and funny.
On the straight lines or in the curves, there is no trap with this car. You don't have to always be 1000% focused.
The fuel consumption, I didn't measure it, but the average consumption on the computer was 8, 9 liters, so it looks really reasonable. Even if the fuel consumption is not the most important factor, when the tank is only 45 liters, you'd better not reach the 25 liters / 100 Kilometers...

I tested the torque, which is satisfactory when you are at low speeds on the 6th ( you have 7 speeds on this car ), which is interesting if you use it as a daily driver.
3/ CAN IT BE A DAILY DRIVER?
It is tempting to say yes, as having pleasure everyday when driving such a car is a certainty. BUT:
- I didn't test it on wet roads, after a good rain, so it is something to be checked. On the snow, as it is a rear wheel drive, it can be problematic.
- It is a strict two places, with two small hoods on the rear and front sides... You have to find the appropriate luggage if you want to go on holidays with that car.
- Parking the car is not easy as you don't have a lot of visibility on the back. You have the radar for that, and the camera, both in option, but a mandatory option.
BUT it certainly is a choice of life, which pleases me a lot.
4/ NOTATION:
- Aesthetics: 9 / 10: Inside and outside, it is remarkable.
- Mechanics: 9 / 10: The engine and the gearbox are excellent. I only wish we had the choice between a manual and an automatic gearbox. But at least this gearbox is very reactive.
- Performances: 9 / 10
- Sound: 7, 5 / 10. I would have liked a more present sound of the engine. Even more with such a melody!
- Visibility: 5 / 10, especially the rear view which is very limited.
- Comfort: 8 / 10, surprisingly comfortable for such a car.
- Price: 6 / 10: If the " base" is correctly priced, the price of the " mandatory " options will jump straight to the stratosphere ( count 8 000 Euros more ). But if you compare it to its real competitors, the Alfa 4C and the Porsche Cayman, the A 110 is still interesting.
In sum, a car which convinced me, at the point that I made my mind. Most probably on the Pure or the Legende, as the S is interesting only if you go on race tracks to really test 100% of its possibilities.
I will let you know my verdict, soon.
Best,
Nicolas
login to reply

It's definitely a very appealing car for the mid-Engined lover.  But I wonder how it compares to the Porsche Cayman and the Alfa Romeo 4C.  And sadly this car is not sold in the USA.

Great photos of the interior!  The interior looks much richer than the Porsche Cayman and Alfa Romeo 4C, which look very spartan.

By: Gelato Monster : November 21st, 2020-19:14
Is the most gorgeous between Alpine, Cayman and M2. It is voluptuous perfectly in every section and angle.

Next I would choose A110. It has more unique silhouettes than Cayman and M2.
I feel Caymans more loveliness yet too conservative.

In terms of Fun and Balance probably Alfa4C is a match with A110 with slight edge of balance on A110 and fun on Alfa as it is lighter.

In terms of Performance and excitement I would pick M2 (even more with M2CS on the ultimate level). I feel it as a class above them.

Nonetheless they are all my perfect mix of Gorgeous Petite Voluptuousness , lightweight tight and sexy engine.
I hate it as my old favorite class is getting more powerful yet bigger and bigger.

A current grail list would be Alfa 4C Competizione, 1M and A110

I believe M2 and Cayman is still evolving

Just my personal opinion. Honestly just enjoy and drive wildly whichever you choose to the max as they are all perfect . 😁👍👍

By: penfriend : November 24th, 2020-07:21
minor things: the really small luggage space for weekend trips with the wife; no servo-steering which can be an issue with parallel parking for some people; no chance to drive up or down on ramps (i.e. parking garages) without hitting its nose.
But once you are aware all of these minor issues they can be handled well.
login to reply

By: patrick_y : November 24th, 2020-09:41
Sounds like your Alfa Romeo 4C is a purebred sports car.  I really like cars with no power steering.  I like the weight of the steering, it doesn't bother me at all!  My first car had very heavy steering (it was powered but just heavy).  And one of the great handling cars; the Smart car (previous generation) with no power steering is actually a great car when it comes to steering feel!  I have yet to drive an Alfa 4C, but I've been told by one of the founders of WatchProSite, Thomas Mao, that the car is simply a fantastic pure expression of driving fun.

By: penfriend : November 24th, 2020-12:08
that I purchased two of it (first a coupe and later the spider); the coupe is the ultimate race edition, weighs with 890kg even 130 kg less than the spider and I use it on track and for high speed autobahn driving 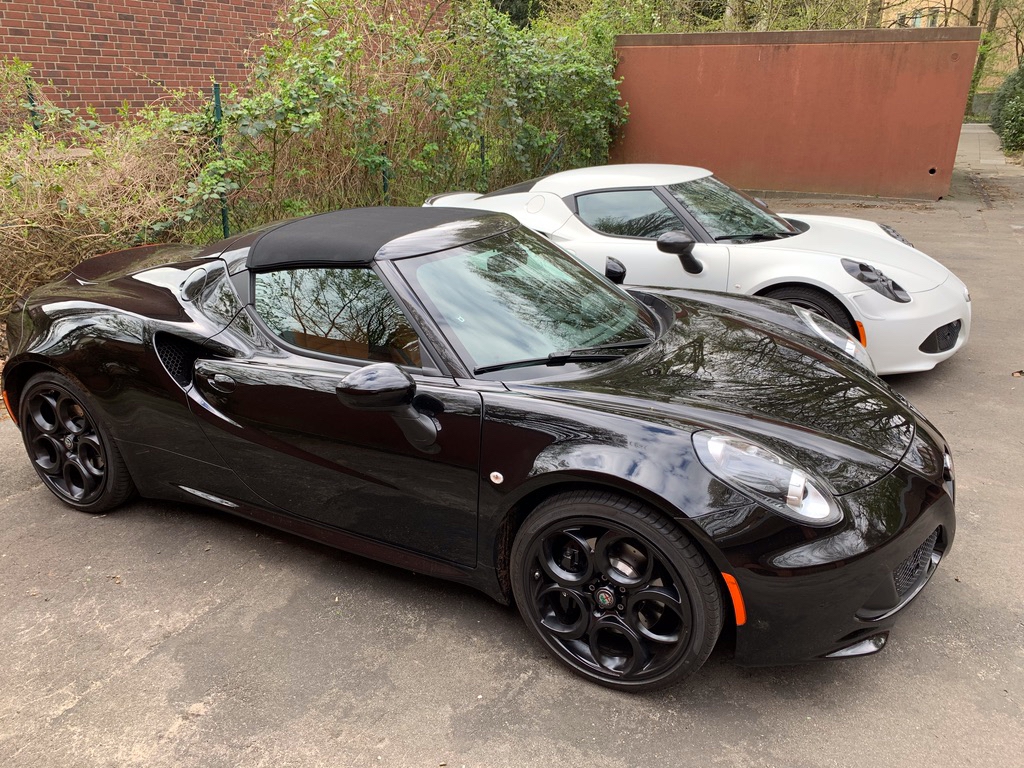 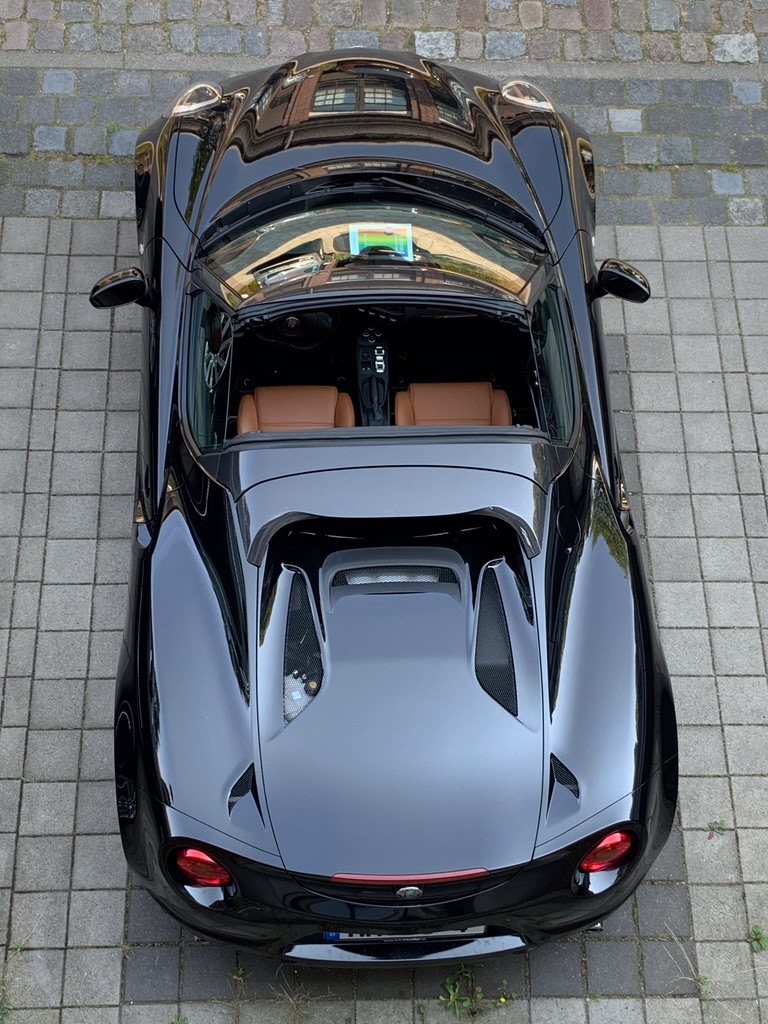 By: penfriend : November 22nd, 2020-06:49
so I went for tobacco brown which is probably nicer also in a few years
login to reply

By: patrick_y : November 22nd, 2020-11:09
The red interior goes well with the black exterior. But that cinnamon brown looks fantastic! Either red or brown would work extremely well!
login to reply

By: Mary Anny : November 21st, 2020-11:20
For me (you?) the pure in Bleu Alpine. In the supercropped image a tonnerre mat gris one I spotted in Barcelona a few days ago. Keep us updated... Simone 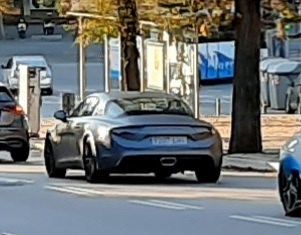