The Version 1 Caliber BVL 138 has 36 jewels.  The Version 2 BVL 138 caliber only has 31 jewels.  A funny detail about the V1 caliber is that many of the jewels aren't traditional pinion jewels.  Meaning they don't hold a gear or a pinion in them.  Many of them are actually "spacer" jewels, meaning that they're there so that way space can be maintained between the plates (since the watch is so thin)!  You'll notice many of these jewels don't have a little hole in the middle where the pinion for a gear would go into.  This is considered to be fairly unusual.  It's also considered to be an elegant technical solution and an expensive solution, as jewels are more expensive than metal spacers, metal spacers can also just be CNC'd in the plate, whereas jewels would likely need to be pressed into the plate by a human.  I haven't studied the V2 extensively,  but it appears most of those spacer jewels have been removed.  Possibly to cut costs, or to improve the overall movement, or both. 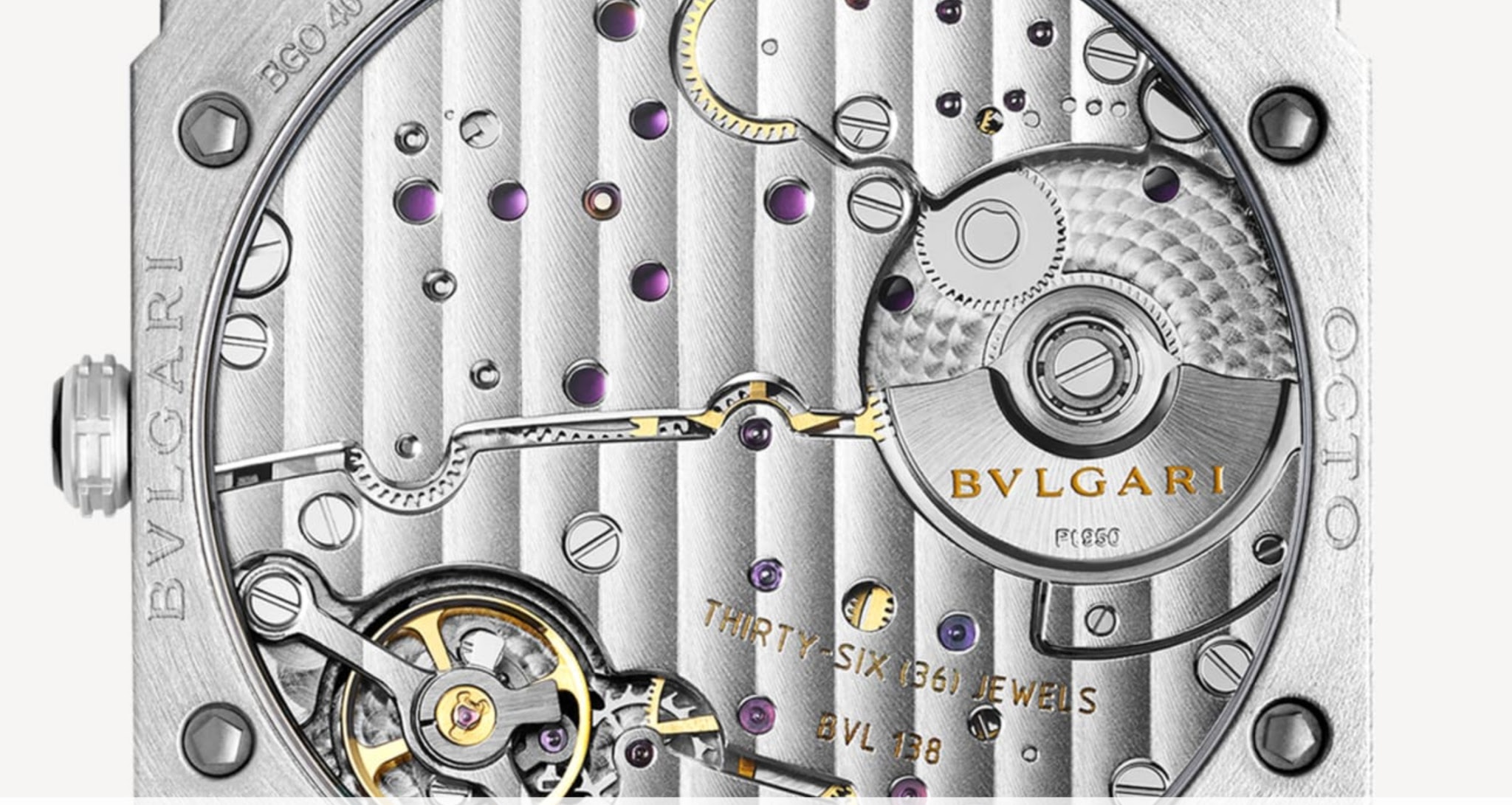 Version 1. Notice the jewels on the top left quadrant, many of them don’t have holes with metal pinions in them. Many of the ones without holes in them are ”spacer jewels" that are there to maintain space between the narrow plates. This is HIGHLY UNUSUAL architecture and not commonly seen nor discussed. 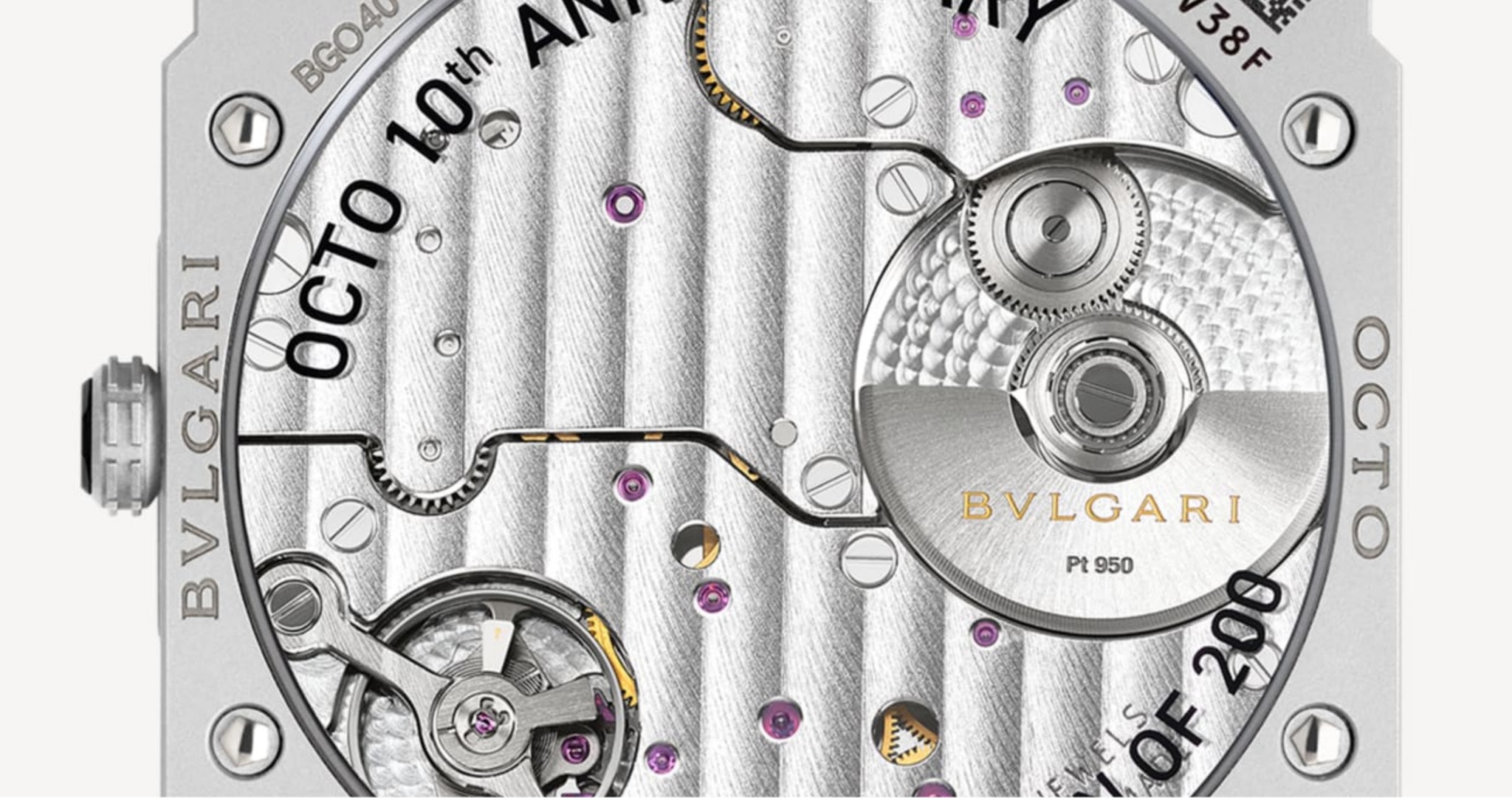 Version 2, notice many of the spacer jewels have been removed compared to the Version 1 movement. Almost all the jewels present in V2 have metal pinions in them.  The rotor also looks a little bigger to me.  So it seems like there are multiple changes between V1 and V2.

I will get in contact with our man on the inside at Bulgari and get some more details hopefully.  Again, super impressed with the WatchProSite community for noticing this super minute detail.  And Tim Mosso is definitely a greatly detailed fella!  Without him mentioning it, I might not have noticed for months!  Thank you WPS members and Tim Mosso!

By: Jakub M : April 12th, 2022-07:12
The gold filled engravings are also gone, the new big plate design evokes Panerai rather than the svelte previous version, looks like automatic winding system was adjusted as we previously discussed difficulty to wind to full power, the rotor is certainly bigger and related gears were redesigned.
login to reply

By: patrick_y : April 12th, 2022-07:51
I wanted to introduce some members to spacer jewels, as not everyone is familiar with spacer jewels in watchmaking as they're somewhat uncommon to be seen with the naked eye. But you took it to the next level! You mentioned many more of the changes!
login to reply
By: m2 : April 12th, 2022-07:23
Mine wouldn’t wind at all and I know a few others with similar issues fyi. Guessing these revisions are to fix it?
login to reply

By: patrick_y : April 12th, 2022-07:48
The BVL 138 does have some winding issues.  So I wouldn't be surprised if they modified it to make it work a bit better.  The new rotor does look larger, which would imply it should work better.

By: Jakub M : April 12th, 2022-08:23
SA at BG boutique said that it is normal and it likely cannot be fully wound from wearing it alone, I thought he was joking, I eventually ended up selling the watch (not for this reason, bought winder).
login to reply

By: enjoythemusic : April 12th, 2022-13:28
Yet why remove the gold-filled lettering and would love to know why a change in the balance wheel? For clarification, a new movement number (??BVL 138a??) is desired to reflect the updated movement.
Love my 'old' Octo FS and feel it better presents a finer, more luxurious timepiece movement. jmho
login to reply
By: GregersLars : April 12th, 2022-07:52
login to reply

By: patrick_y : April 12th, 2022-13:08
But we seem to be pretty fair. When Montblanc Villeret made a specific steel watch model with that Minerva Villeret movement, I think we had over 20 owners of the 50 watches ever made! And that was already several years ago!
login to reply
By: jiggerly-cool : April 12th, 2022-09:54
Hi Patrick, when you inquire with your Bulgari contact, please also ask how the jewels are counted, whether the 36 included the spacers.

Aren't only bearing/pivot jewels supposed to be counted?  This harks back to the days of yore before rules were tightened, when non-functional jewels used to be added to inflate the jewel count.  It would be helpful to know if spacers are considered functional and part of the count (I note there appear to be more spacers than the 36-31 difference between v1 and v2).

Another thing is, please convey feedback that enthusiasts (well, ok, I'm speaking just for myself and a few others I know) find it annoying that watch companies change/modify movements but the name/designation remains unchanged.  Like this BVL 136, apparently.  In the interest of transparency (at least) there should be something to denote changes, say, BVL 138-2, BVL 138/A or similar.

Sometimes the changes are improvements, which of course the brands have every right to implement.  Like with JLC moving the year indication and lengthening the power reserve from ~40 to 70 hours, but still calling it the same "Calibre 868"  (yet there are other JLC movements with "/").  Nevertheless, it would be better with a change indicated in the designation.

(While we're at it, Panerai takes an interesting approach to this.  When there's an upgrade change the movement designation announces it, no eagle eyes needed, like how the P.4000 becomes P.4000/10 after skeletonization [and a switch to a gold rotor, which also happens with the P.4000 when cased in gold].  But when there's cost-cutting/feature-stripping, like the P.9010's lost stop-seconds and decoration, all's quiet.)

By: patrick_y : April 12th, 2022-12:55
I have a feeling that these "spacer jewels" are indeed counted on this particular model. I'll see what I can find out!
login to reply

By: patrick_y : April 12th, 2022-12:53
Revisions to a caliber are usually done to address deficiencies realized from real-world situations and reliability. But overall, watch calibers are consistently being designed to become easier to assemble, easier to regulate, easier to service, and generally more reliable. But not usually more accurate.
login to reply

By: enjoythemusic : April 12th, 2022-17:10
Patrick, it a mixed story filled with many early 'victories'... and later homelessness of my own making. Today, it brings added appreciation for many 'simple pleasures'... and knowing if a 'reset' happens we'll be fine.
Chronometer, as an artist i truly 'need' a Muse, someone who knows when to root for me, expand the 'language' of life and music, yet also pull me back when i've gone a bit 'sideways'. Checks and balances and all that. She's also a timepiece enabler (i know, right, can't it get any better than that

), and in fact Torsti Laine is building her a custom timepiece to her specs. Rest assured, my love of music grows with each passing day. Though please understand, am a classically-trained percussionist since the 1970s and life is what happened while making other plans. So while there's zero desire for the music BUSINESS, am here enjoying it on many levels and helping the industry in my own way for decades.
To expand the language of....
Added plus, and this only came into reality as it took many craftspeople to create custom bits to my specs.... from a 1980s dream kit to finally happening three years ago. And have been asked so will head this off, there are no videos of me playing, no (modern) audio, and no desire to really do so as this is for me and my Muse loves it.
Influences: Bozzio, Bruford, Roach, Gadd, Krupa, Baker, Peart, Harrison, and too many more to list here.
As always, in the end what really matters is that you.... enjoy the music 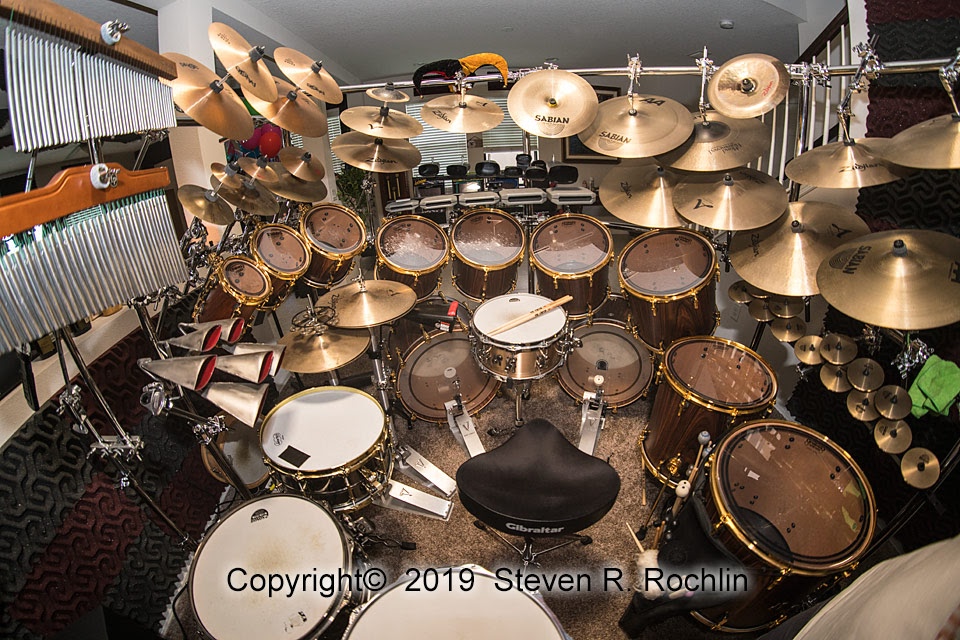 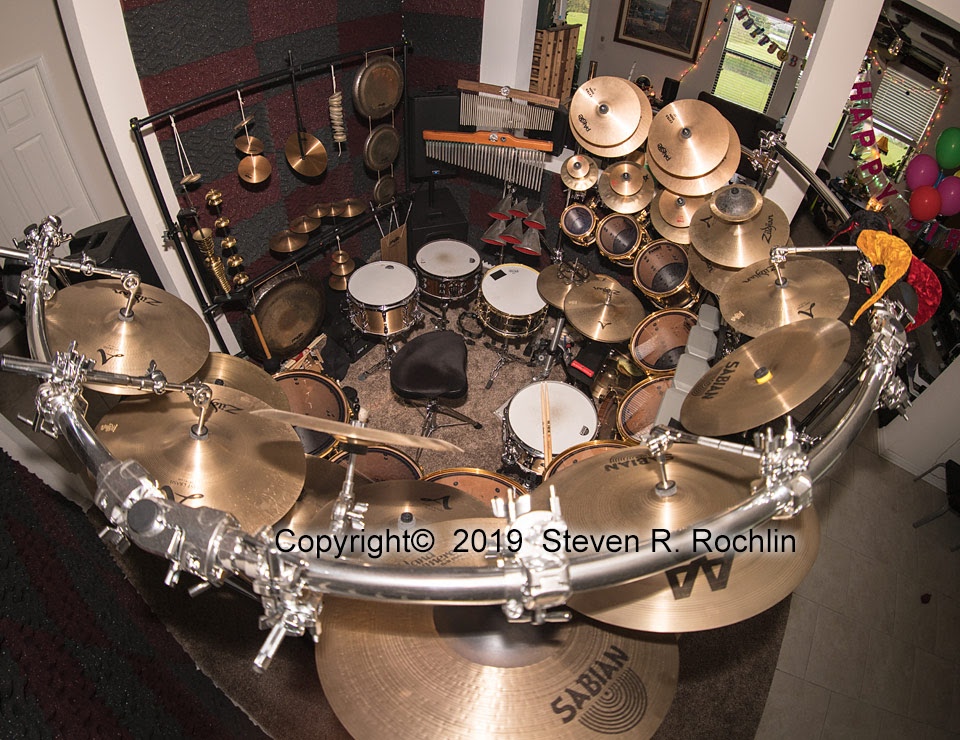 By: Chronometer (aka yacomino) : April 12th, 2022-21:46
I am really happy you her in your life and that you also get to experience several of your passions! Regarding Laine, I am very close to ordering a V38 myself. Such a nice brand
login to reply

By: enjoythemusic : April 12th, 2022-21:52
Niiiice, go for it as i think he's booked through the end of this year right now. Was thinking of going with a custom Tux dial, but as my Muse and I were looking at his Instagram page she instantly fell in love with this below combo, so she won this round 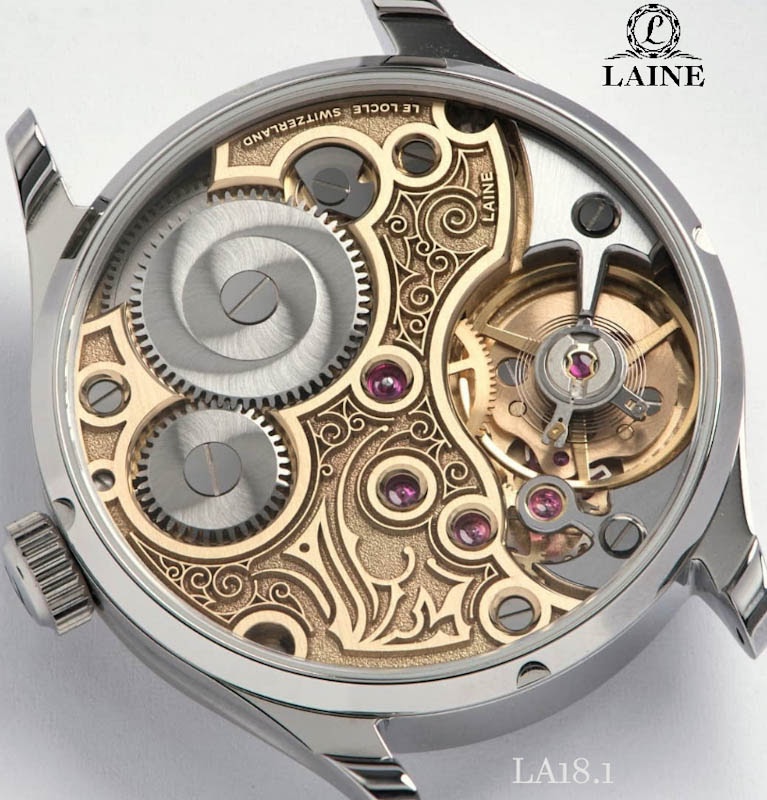 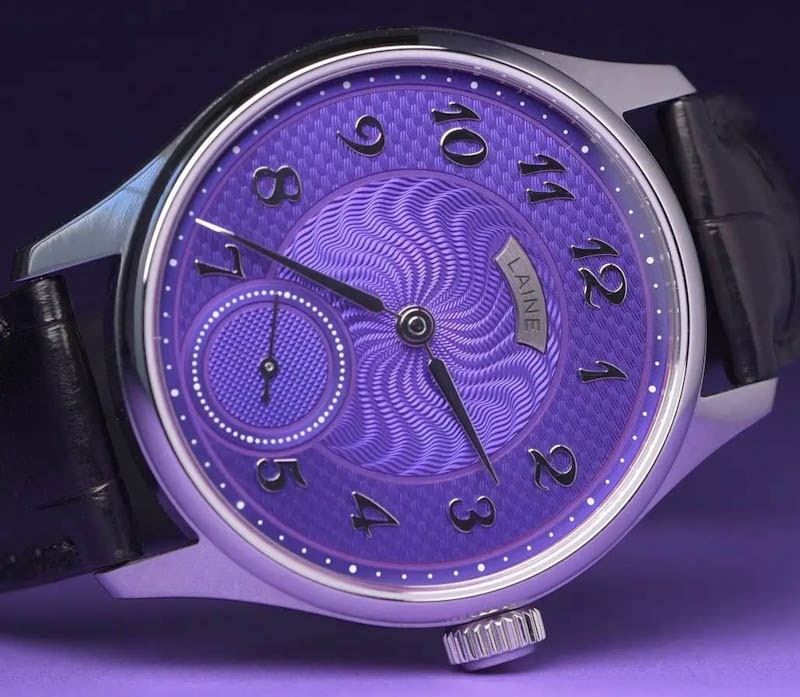