Dec 28, 2014,06:40 AM
To recap, the Timewalker Chronograph 100... a superwatch (like a supercar) mechanically in my books.
Not the most handsome watch at first glance. Not easy to appreciate in terms of its looks, especially for lovers of classical watches (like me).
A busy dial when you first look at it. It was not a watch I spent more time with when I first saw Montblanc's SIHH 2014 offerings. The new Heritage collection's Perpetual Calendar and Pulsograph, being classically designed and finished, naturally caught my attention more.
When Montblanc HQ shared more details of this Timewalker 100 with Mike and me, I learned and appreciated more about this watch. On a high level, I already knew the movement is superbly finished by Montblanc Villeret and it is a mechanical marvel being able to mechanically time up to 1/100th of a second.
Of course, we know the Montblanc Villeret TimeWriter II Chronographe Bi-Fréquence 1000 could measure time up to 1/1000th of a second and it's even a greater mechanical marvel but that is of a different price league and is constructed much more traditionally, according to the traditions of their Villeret manufacture (case, dial and movement). This Timewalker Chronograph 100 on the other hand, has a very nice blend of modern vs tradition. Mike and I have already covered the construction of the composite watch case and how the dial is designed and constructed in a very modern fashion, in our previous posts.
The movement, the MB M66.25 calibre, is however, very traditional in construction and finishing, to the highest of standards in the Montblanc Villeret manufacture. 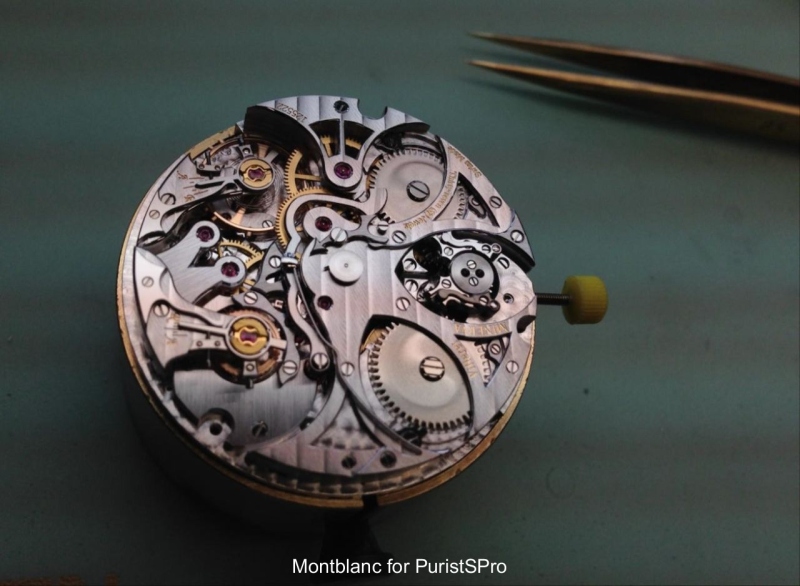 First of all, let me state that I'm a big fan of traditionally crafted and very finely finished manual chronographs movements. I can stare at movements from Montblanc Villeret chronographs such as the calibres 16.29 and 13.21 as well as Lange's Datographs' movements or any highly finished VC/PP/JLC Duometre Chronos, etc for a long time, especially with a loupe. I just love all the details on a traditional chronograph from the column wheel, to the large balance wheels (slow oscillators are typical for such traditional chronos) to the chrono levers, etc, especially when they are very well finished by hand.
This calibre M66.25 is no exception. I saw the movement in person some months back and wish I could see it again soon in the metal. For now, thanks to Montblanc HQ, I have access to some pictures of the movement's assembly in their Villeret manufacture, which I will share soon 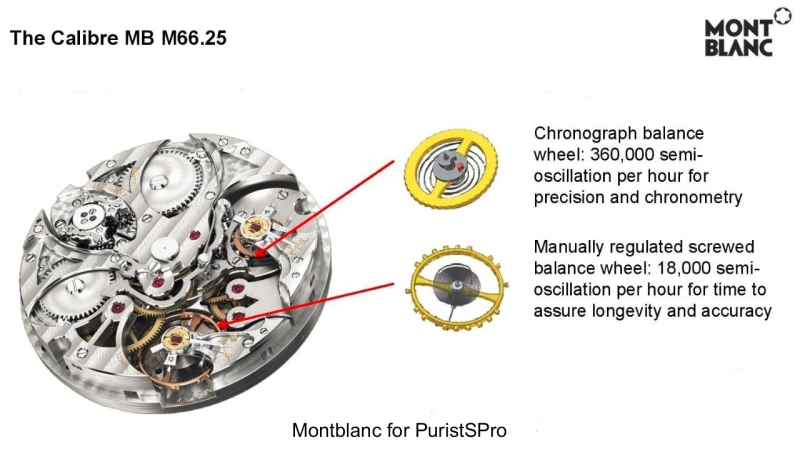 There are also two barrels to power separately the time and chronograph function, hence with the chronograph running (fast like a supercar!), the time function's power reserve will not be affected.
The winding system is a bi-directional one - clockwise to wind the time and anti-clockwise for the chronograph. See illustration below provided by Montblanc HQ with the 2 barrels shown on the picture. 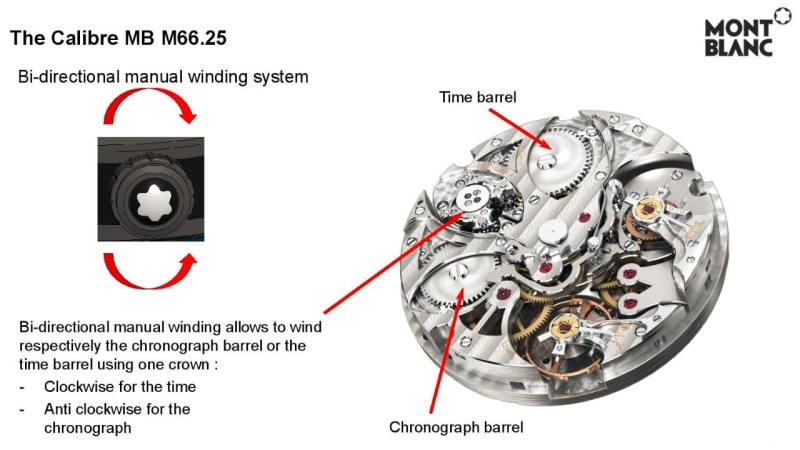 The 1/100th of a second chronograph mechanism is a patented one by Montblanc.  A two-level column-wheel separates the functional level for starting and stopping the chronograph from the zero-return level for the elapsed-time counters. The higher level controls the chronograph rocker: its arrowhead carries the slender steel lamella that starts and stops the 50-Hz balance. The lower level of the column-wheel is the switching plane for the beak of the heart-lever. This lever returns to zero the 60 elapsed-seconds hand, which is connected to the heart-lever of the 15 elapsed-minutes counter.
There are essentially two different reset mechanisms found on this movement. 1) A classical one with hammers for minutes and seconds. 2) a central reset mechanism with a catch instead of a whip for the 1/100th of a second measurement. Impressive! I hope the picture below explains this better? with some graphical illustrations. 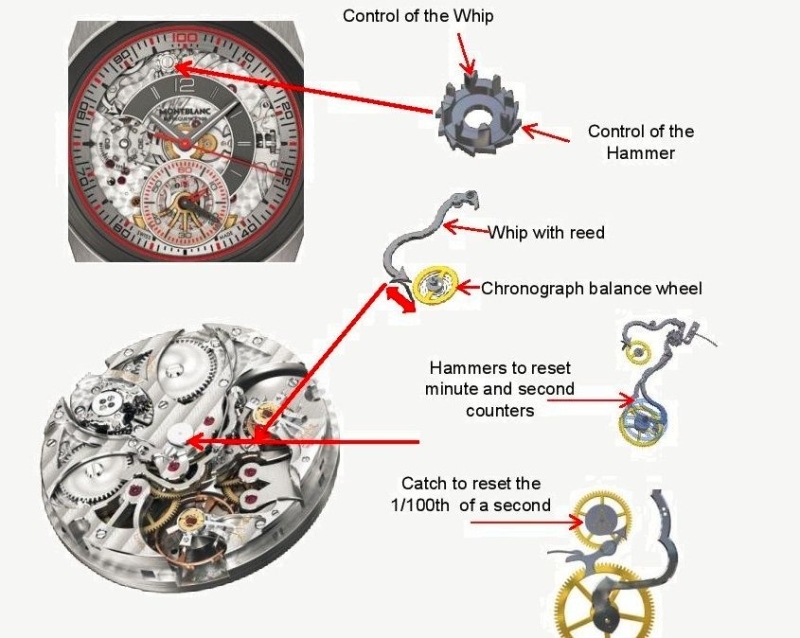 Hope you enjoyed this series of technical write-ups from Mike and I on the Timewalker Chronograph 100 (itself a very technical watch from the case to the dial to the movement!). This is the second watch in 2014, with a LeLocle case and a Villeret movement (the other being the Heritage Pulsograph). I believe Montblanc will make their 2 watch manufactures collaborate even more in 2015, joining the expertise of both manufactures.
We have some nice pics of the movement assembly of this calibre M66.25 (thanks to our friends in the Montblanc Villeret manufacture!) and will share them soon

By: jrwong23 (aka watchthebin) : December 28th, 2014-06:40
To recap, the Timewalker Chronograph 100... a superwatch (like a supercar) mechanically in my books. Not the most handsome watch at first glance. Not easy to appreciate in terms of its looks, especially for lovers of classical watches (like me). A busy di...
login to reply

I didn't know that this Chrono worked like the JLC Duometre.

By: amanico : December 28th, 2014-07:06
With its bi directional winding crown! Thank for this very interesting article, Robin. To be saved! Best, Nicolas
login to reply

By: jrwong23 (aka watchthebin) : December 28th, 2014-18:52
Same similarities indeed especially the bi directional winding. Both movement plates also made of German silver :) The Montblanc Villeret's movements base plates are all crafted from German silver and rhodium plated. I think the JLc duometre's German silv...
login to reply

Untreated? That is a good question. Will have to check with the Manuf. [nt]

By: dylan61 : December 28th, 2014-07:51
And a lot learnt about the great work MB is doing. Love the technical details! Hope to see more of such superbly informative posts!
login to reply

We enjoy the technical marvels :)

By: jrwong23 (aka watchthebin) : December 28th, 2014-18:54
Thanks bro and glad you enjoyed the post. Let's check out this watch in Singapore someday :) Cheers Robin
login to reply

By: ianny : December 28th, 2014-08:02
You made it easy for me to understand. Such a awesome movement, but it's a pity the dial design doesn't appeal to me. It's a bit too messy IMHO. Have a great New Year! Regards, Ian
login to reply

The clear illustrations make all the difference

By: NT931 : December 28th, 2014-18:17
and the detailed information helps too! Fascinating movement, but I'd agree with Ian that the dial is a little busy for my taste.
login to reply

By: jrwong23 (aka watchthebin) : December 28th, 2014-19:00
And based on your collection, you like vintage classical cars and watches like me :) Still the movement of the Timewalker 100 is very classical in finishing. I hope we can see it one day in Singapore together Cheers Robjn
login to reply

By: jrwong23 (aka watchthebin) : December 28th, 2014-18:58
Agree - I must admit I enjoy the movement more than the dial design which is very modern and I like classical watches mainly. It's messy as it tries to show many technical aspects of the watch including the Minerva arrow that now has a function to play :)...
login to reply

By: chuck19 : December 28th, 2014-16:25
never realised so much technicalities goes into the MB timepieces/movements.. Think I'll pop by an MB boutique soon to see and appreciate this piece in person. Thanks for the report Robin. Cheers !
login to reply

By: HPoirot : December 28th, 2014-18:33
Thanks for the very detailed post! I feel i can go Mont Blanc and apply for a position as a Cal MB watch maker!
login to reply

By: yming : December 28th, 2014-22:01
.. i particularly like how they have 2 mainsprings and balance wheel and the winding is like a sonnerie watch! need to see the chronograph in action.. any videos?
login to reply

You just reminded me! Magnus did a nice video on this watch before