By: foversta : December 27th, 2020-01:35
Lange & Söhne unveiled this year during the digital edition of Watches & Wonders a variation of the Zeitwerk Minute Repeater in a white gold case, while the original model, presented in 2015, was in platinum. As this is a minute repeater watch, the change in case material compared to the original watch is far from insignificant. This material has a significant impact on the quality of the sound rendering of the minute repeater mechanism. This is the reason why such a change was expected. White gold is considered as a better conductor of sound than platinum while vibrating less than steel. It therefore has the reputation of generating better volume while preserving the purity of the sound.

I consider that there are 4 factors to be taken into account in order to obtain a satisfactory minute repetition sound: volume (the intensity of the sound), rhythm (the speed with which the notes follow each other and I have a clear preference for slow rhythms), purity of the notes (influenced by the way the hammer strikes the gong) and sound insulation (the sound must not be disturbed by the noise of the mechanism). The Zeitwerk Minuter Repeater was very satisfactory on the last 3 points but less so on the first one. Unsurprisingly, I considered that the imposing platinum case tended to muffle the sound. It was with great pleasure that I discovered the white gold version and I must admit that I found it more convincing than its predecessor. 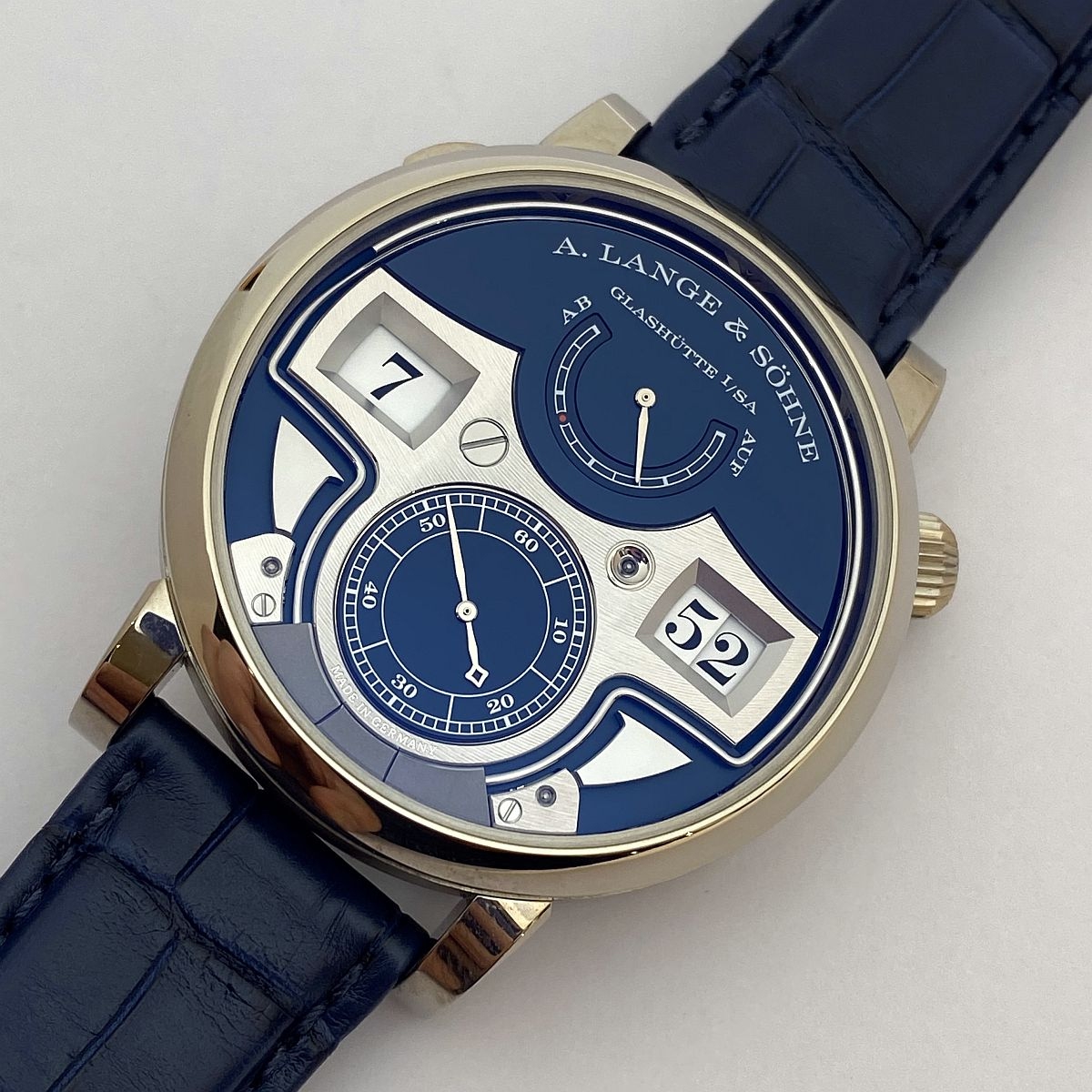 One may wonder why Lange & Söhne first brought out this watch with a platinum case. I think it was simply a matter of prestige. Because the Zeitwerk Minute Repeater is not a minute repeater watch like any other. It combines a decimal minute repeater (which is very rarely found) with a digital display of hours and minutes. It is this combination that makes this piece unique. At the time, I could hardly imagine the Saxon manufacturer presenting it with a case other than the platinum one. 5 years later, the time has come to propose a variation and I imagine that some collectors who already own the platinum version will not hesitate to position themselves on the white gold version, if only to appreciate this change in sound rendering.

This new version is also very beautiful which does not spoil anything. Of course, its presentation is identical to that of the platinum model. The diameter of the case is still 44.2mm (for a thickness of 14.1mm), the gongs follow the mushroom shape of the "time bridge" that links the displays together, the hammers always strike inwards (whereas they strike outwards with the Zeitwerk Striking Time), the power reserve display is at the top of the dial, the pusher that triggers the repeater is at 10 o'clock... in short, nothing changes. Yet a fundamental difference exists between the two watches from an aesthetic point of view. The platinum model had a silver dial and therefore the contrast between the time bridge (in rhodiumed black Silver) and the dial was weak, the first tended to blend into the second. On the other hand, the dial of the white gold version has a beautiful deep blue color that makes the time bridge much more perceptible. I thus find again the spirit of the "basic" Zeitwerk in white gold which offers a black dial. This model is perhaps the most emblematic of the collection for thanks to the enhancement of the time bridge. I'm very happy to see that Lange & Söhne has proposed a dark dial... which differs from the one of the basic model. 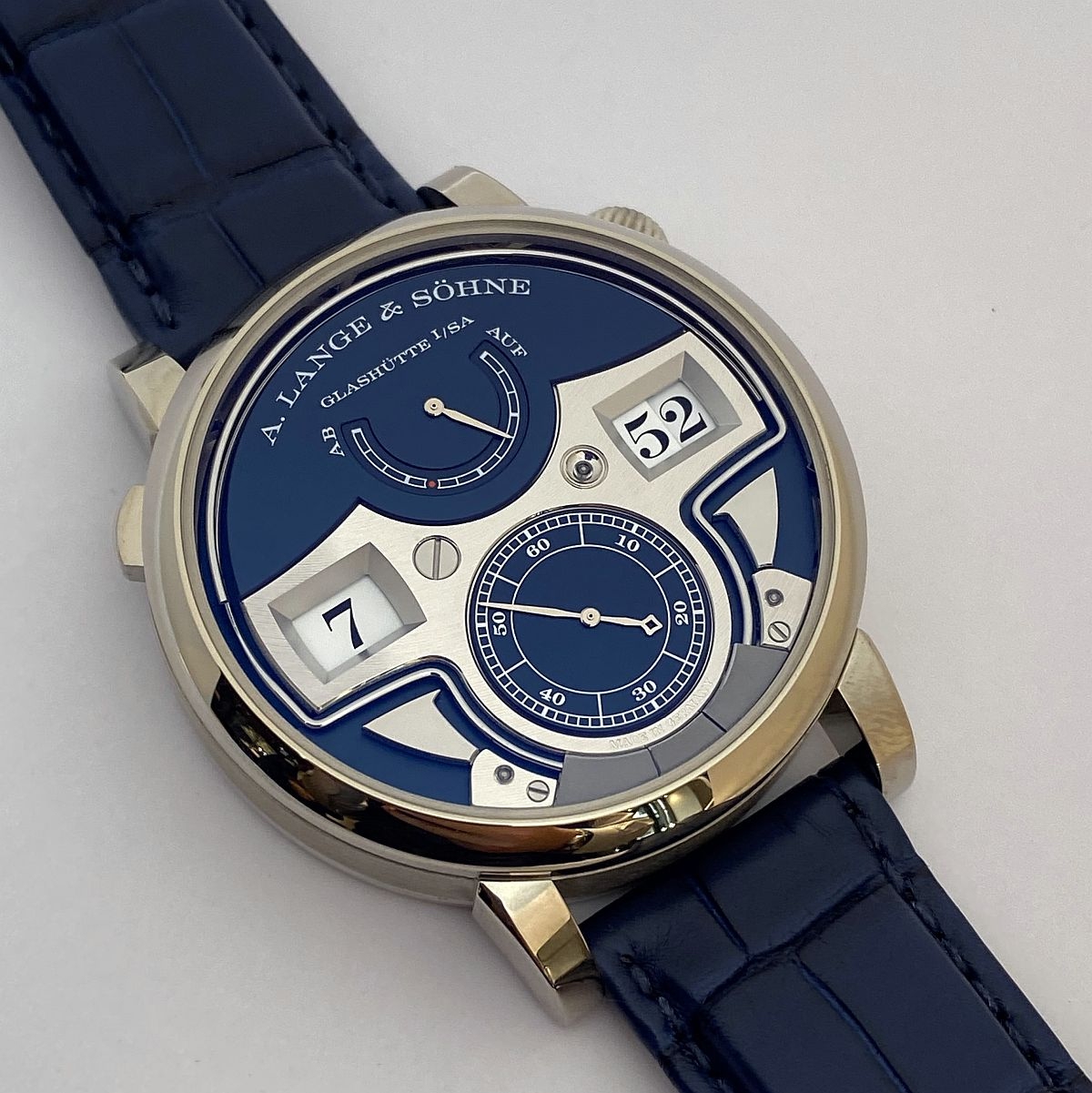 This deep blue dial is really very successful, creating beautiful reflections with a well-dosed depth. The hammers also benefit from this better contrast and they stand out better. This is of course excellent news since they are visible on the dial side.

Either way, platinum or white gold, the great strength of the Zeitwerk Minute Repeater remains the perfect harmony between the complication and the display. The choice of a decimal minute repeater demonstrates the attention to detail at Lange & Söhne. With a watch with a digital display, such a choice is logical and obvious. It is true that at the beginning, we are always surprised by a decimal minute repeater... especially when we go beyond the 40th minute and the repeater seems to play a fourth or even a fifth quarter... and then we remember the principle of this repeater which plays in sequence, the hours, the tens of minutes and the units. The advantage of such a repetition is that the units are only 9 whereas with a classic minute repetition, the units exceeding the quarters can go up to 14. However, the role of the complication is to make us interpret what time it is by listening to the notes. The risks of misinterpretation are lower with the decimal minute repetition than with the classic minute repeater. 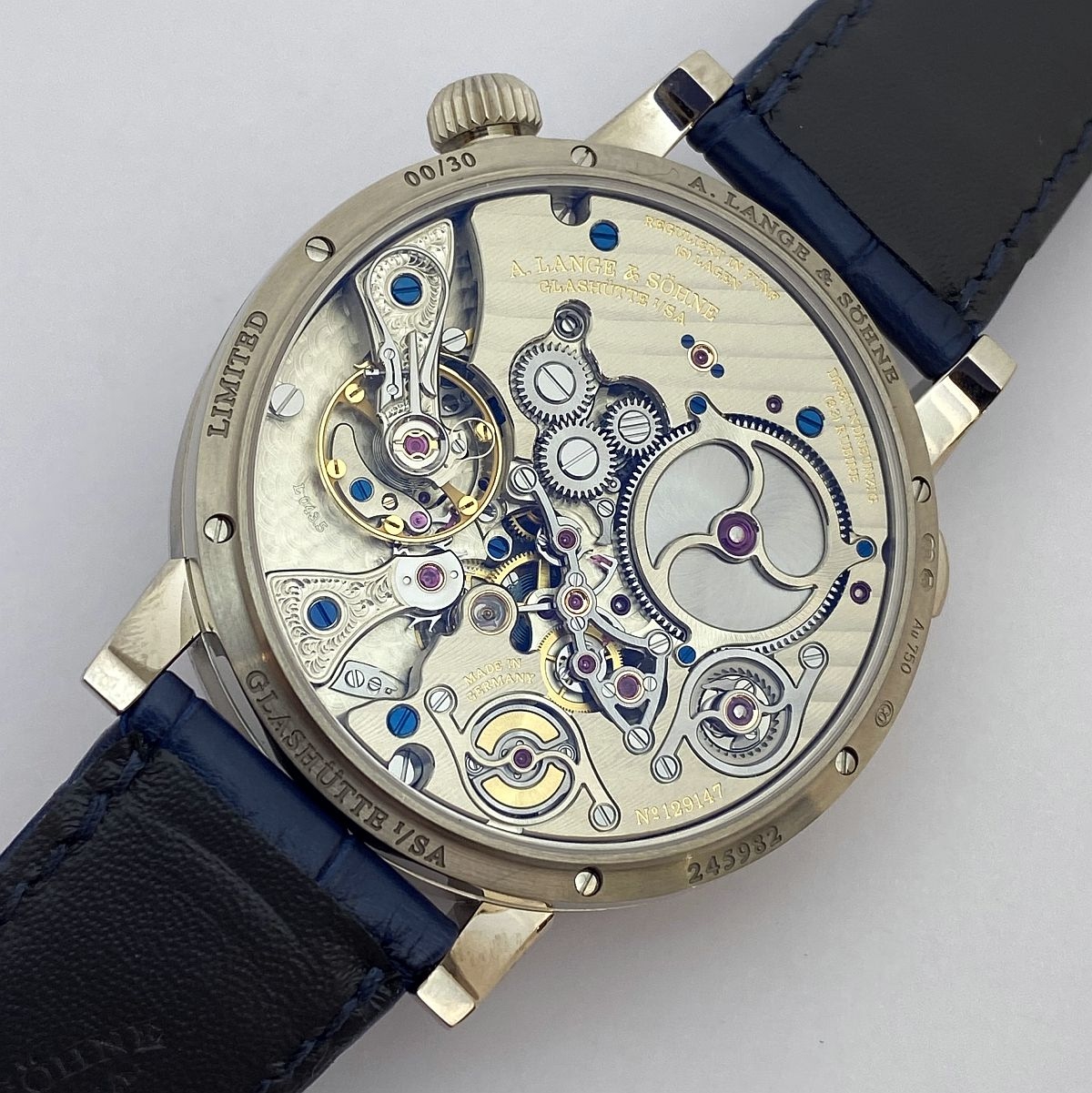 The Zeitwerk Minute Repeater offers a real show on both sides: on the dial side with the digital display and the hammers in action. On the movement side with the spectacular handwind L043.5 caliber. This caliber obviously meets the highest demands in terms of technical content and finish on the part of the Manufacture. Its primary challenge is to control energy consumption, which is called upon on numerous occasions. First of all, energy is available in quantity, given the power required by the digital display, hence the problem of managing its release. The behavior of the watch could be disturbed during disc jumps but also when the minute repeater mechanism is launched. Lange & Söhne worked on these aspects, including a constant force escapement and a fly governor typical of the Zeitwerk collection.
From a visual point of view, the caliber is magnificent because of its complexity but also because of its moving parts when the minute repeater mechanism is in action. Finally, the area around the balance wheel is rather clear which is pleasant. Note that this caliber has 93 jewels which shows the complexity of its architecture. Beautiful and excellently finished, it only confirms the exceptional character of the Zeitwerk Minute Repeater. 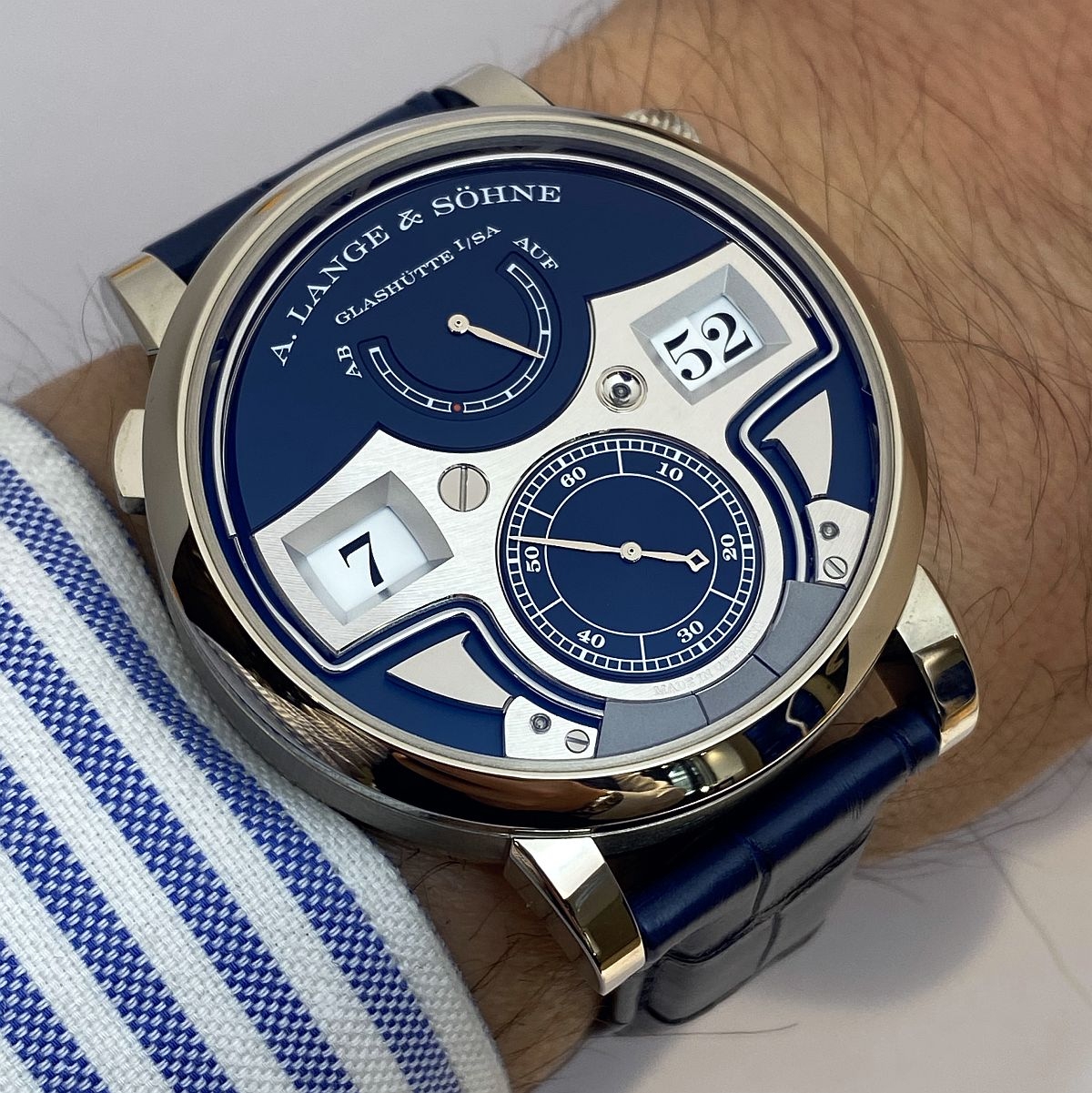 Even though the white gold case has replaced the platinum one, the Zeitwerk Minute Repeater remains an imposing and heavy watch. So to enjoy such a concentrate of watchmaking technology, you have to be able to wear a solid wrist. You also need a well-stocked wallet, since the price is as high as 452,800 euros in France. Such an amount may seem excessive for a "minute repeater" watch, especially since it is the same price as the platinum version. But once again, this is not a simple "minute repeater" and the solutions implemented and the perfect execution of the whole can justify such high prices.

And for consolation, you only have to press the pushbutton at ten o'clock and check that the sound quality is much better than that of the previous version. I didn't have the opportunity to listen to both watches at the same time. Here I transcribe more a feeling than a certainty. But after all, doesn't such a result make sense? In addition to changing the material, Lange & Söhne has also had the opportunity to work on details to improve the sound rendering over the last 5 years. In any case, the Zeitwerk Minute Repeater in white gold, available in a limited series of 30 pieces, is undoubtedly a very fine demonstration of Lange & Söhne's know-how.

+ the beauty of the night blue dial

+ the quality of the finishes

- the watch is imposing and heavy

- the price is high

By: MiguelFlash : December 27th, 2020-07:55
This watch is a marvel. The original black dialed version is my grail watch. Simply spectacular!
login to reply