Comments:
By: Dan003 : August 12th, 2017-04:58
Hi guys,
I have owned a brand new white gold Zeitwerk for two weeks (since 29 Jul). I have made some observations that I hope some connoisseur and a Lange expert can shed light on.
(1) The second hand always land on position of 12 o'clock - when I left the Zeitwerk to wind down completely by itself on three occasions, the second hand always stop at the 12o'clock position. Is this mechanism similar to that in the latest version of the Lange 1?
(2) No noticeable 'arming' of the minute disc - I noticed from videos that were uploaded on YouTube, that the minute disc would move a little, a few seconds before the minute switches. In fact, according to Mr Peter Chong's explanation on the mechanism, this 'arming' process would occur about 8 seconds before the minute switches. However, I could not observe this 'arming' process in my Zeitwerk. The minute disc simply switches exactly at the 60th second (i.e. 12o'clock).
(3) There is a structural change to an observable part of the movement - I have highlighted this part using a forumer's Zeitwerk (Alex83; I hope you don't mind me using your photo as a reference) and a photo of my Zeitwerk. Its the part where the blue screw resides. In my Zeitwerk, the part with the blue screw is not a single piece with the part above it.
Thanks! 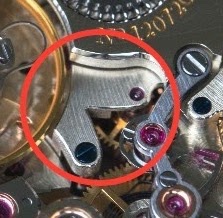 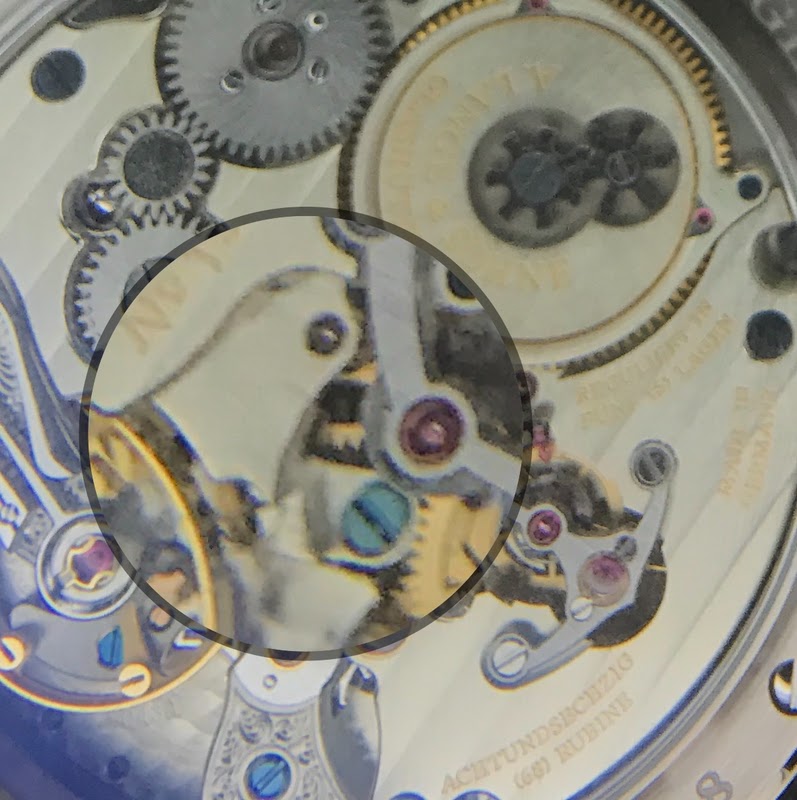 By: TheMadDruid : August 12th, 2017-05:43
There are several models of Langes that have this feature-the 1815 U/D (which I think was first); the Zeitwerk; the Richard Lange PLM; and the 1815 RPC; and most recently the revamped Lange 1. When Lange first released the U/D the press release indicated this feature. Since then, Lange has not advertised this feature-they just let the new owner find out for him/herself that the feature exists.
login to reply
By: Dan003 : August 12th, 2017-07:05
This finding is quite unexpected for me...Initially I thought it was just a coincidence that the second hand stop at the same position three times in a row..

By: TheMadDruid : August 12th, 2017-08:27
I wrote to Lange and got the confirmation that it was not a coincidence!
login to reply

Lange probably made a subtle evolution of the mouvement recently (over the last 2 or 3 years may be. I can't tell you when exactly) which could explain your first point because with my Zeitwerk, you can notice a little move of the minute disc around 6 seconds before 60 seconds (or 12 o'clock). I would say it's an "upgrade" compared to mine. Cool!

I hope you still enjoy it.

As you can notice on my shots below, I have the same mouvement than Alex83 compared to yours. 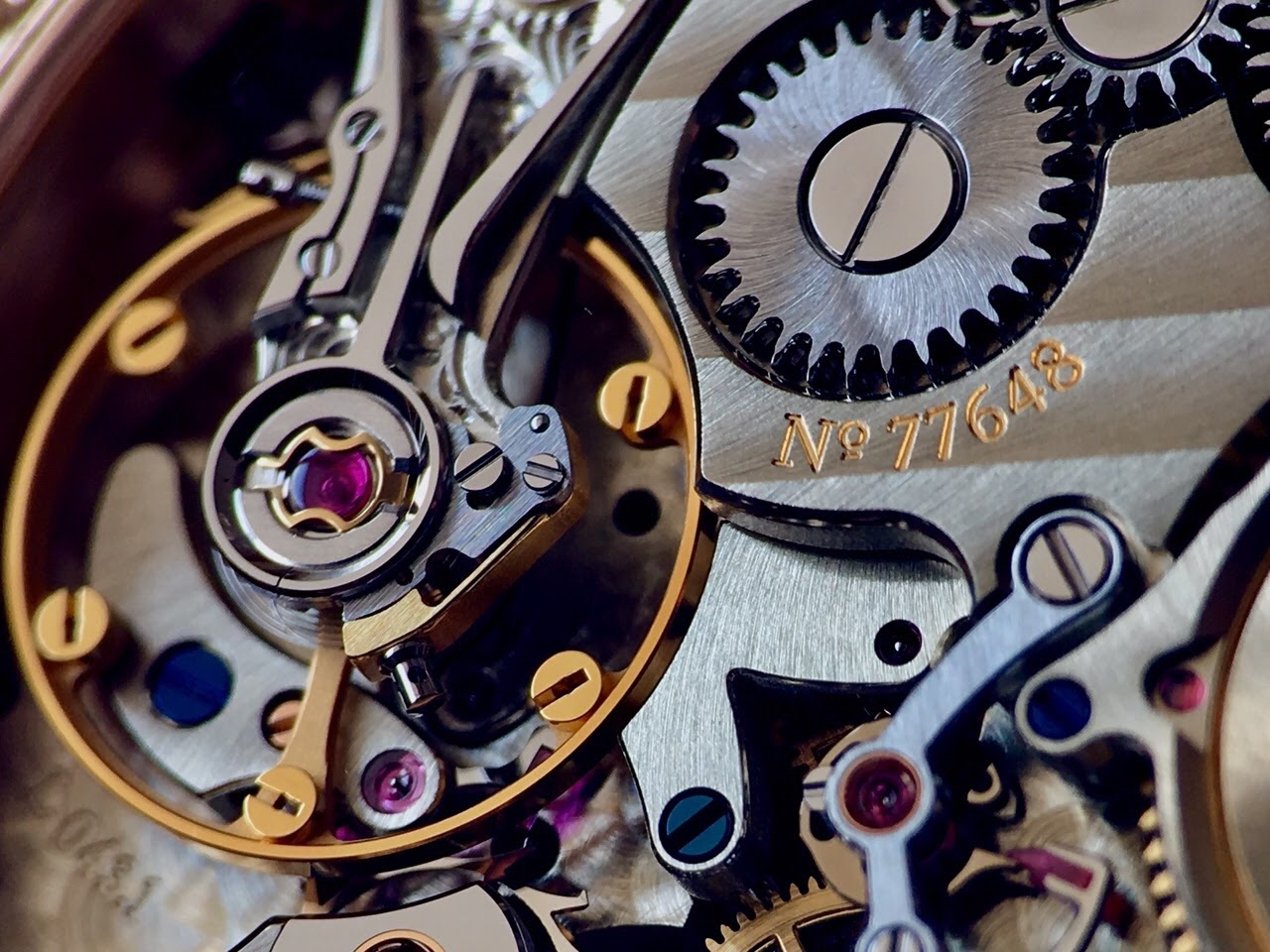 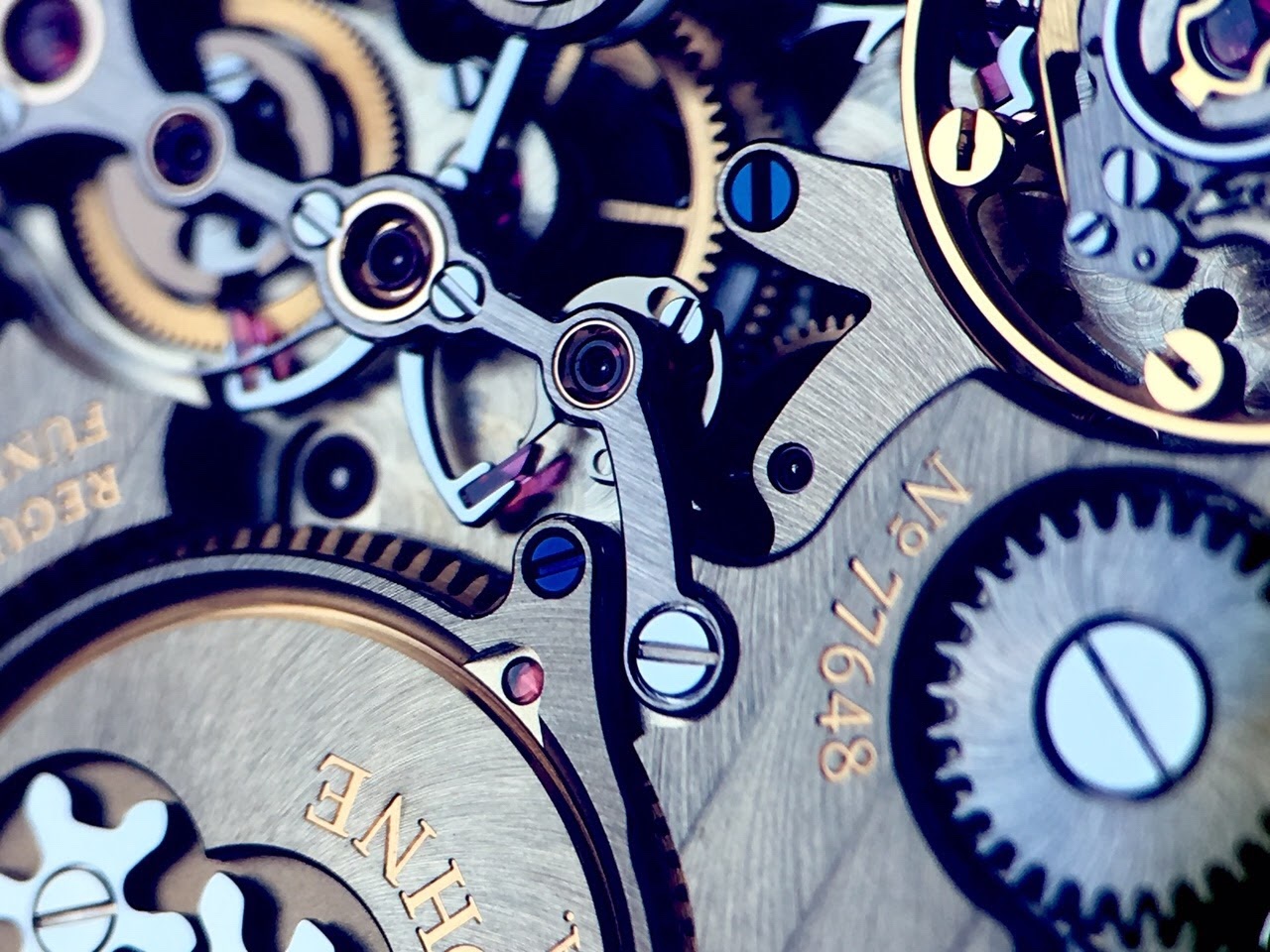 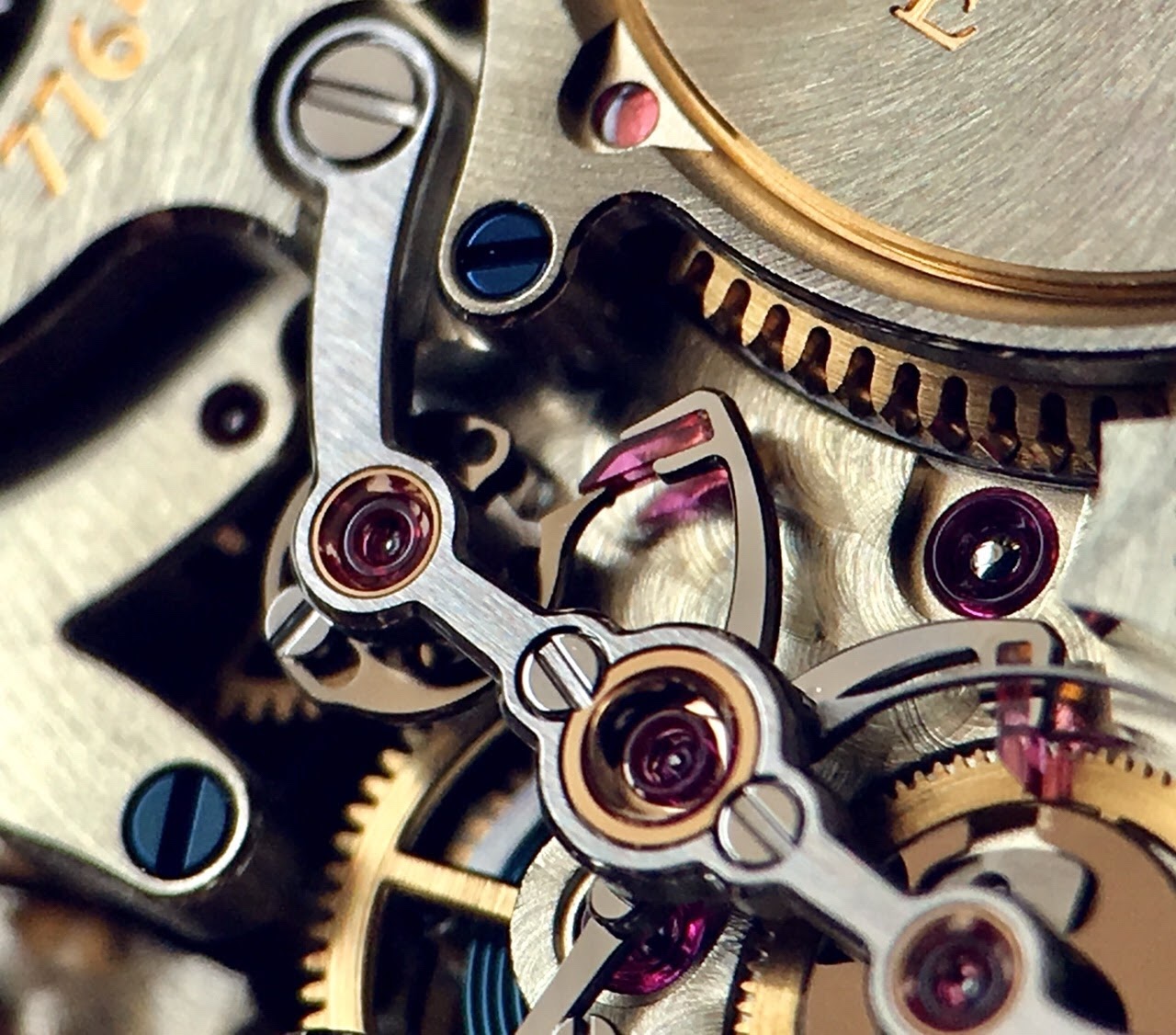 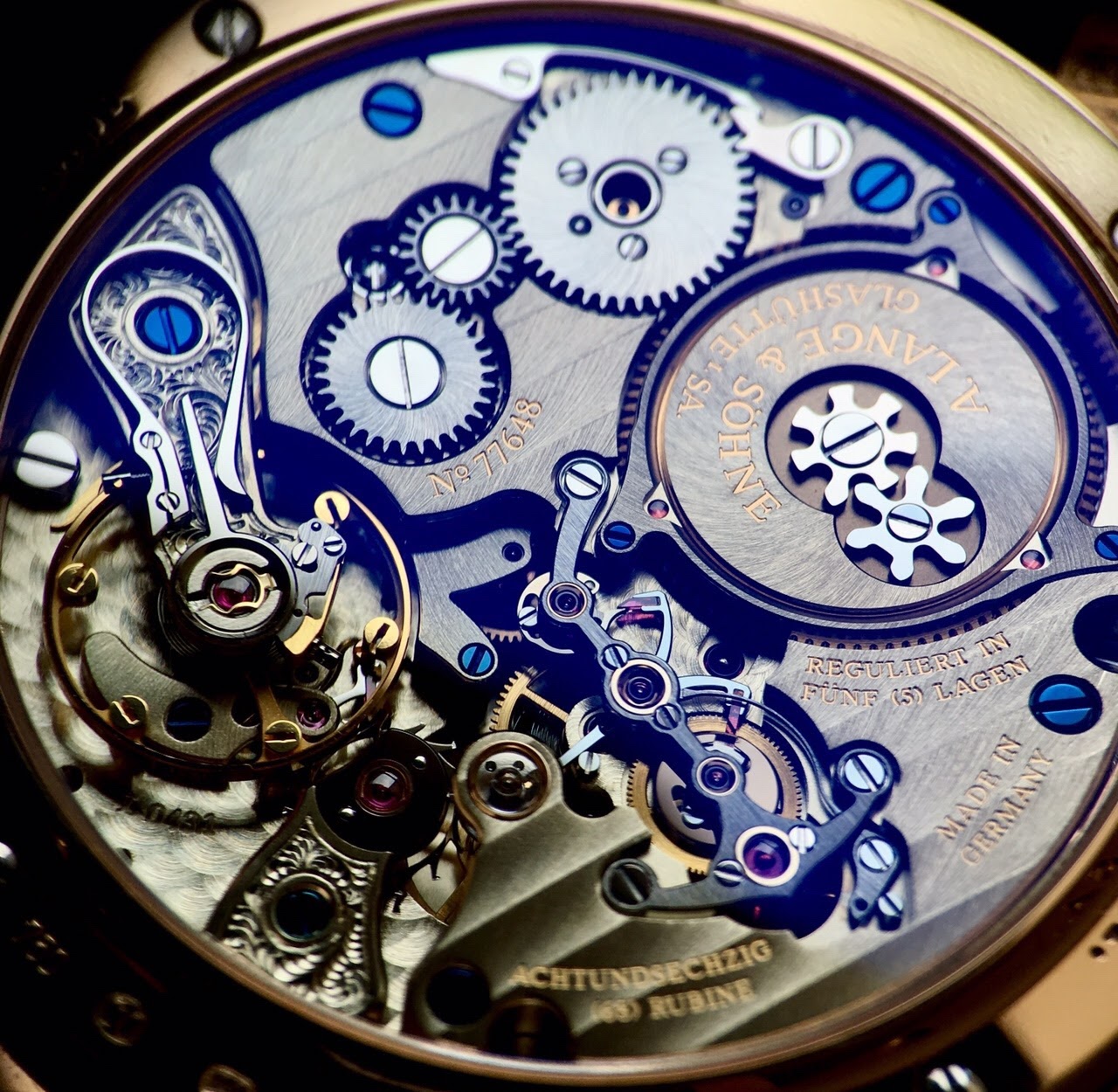 By: Alkiro1 : August 13th, 2017-01:16
To be honest with you, I didn't know that the regular Zeitwerk mouvement had knew an evolution recently. That's really cool from Lange in my opinion.

By: skyeriding : August 12th, 2017-07:29
The "arming" is a little side effect of how the mechanism was developed, and my little theory is that it may or may not be observable depending on how the tolerances are set for each Zeitwerk. To understand that, we need to understand roughly how the movement works first...
If you want to see the arming occur on the movement side, have a look at this image (taken from Peter Chong's article of Zeitwerk): This is the mechanism under the "anchor" steel bridge you see on the Zeitwerk movement.
Its hard to explain it simply (refer to diagram above), but the "green" colored disc is actually the seconds hand running. It has a little roller jewel on it that will rotate/push the Y-lever of the rementoir (it is slightly spring-loaded). Around 52 seconds in, it rotates the lever far enough that it "releases" a purple disc/cam. Note that in that 52 seconds, the rementoir spring has built up energy onto this purple disc/cam.
However, while that happens the Y-lever also drops another pallet jewel into the "gap" of another disc/cam (yellow). Note that both disc/cams are connected via gearing so they rotate together. This is the "priming" that occurs. Hence, if you observe your Zeitwerk movement side, look at the Y-bridge and observe the pallet jewel dropping into the yellow disc/cam. The "little priming jump" happens when that disc/cam rotates and gets blocked by the said pallet - and I believe how noticable the priming happens on the disc is depending on how these pallet jewels/discs are adjusted relative to each other.
At 60 seconds, the y-lever will be released by the running seconds hand and the Y-lever springs back into its original position via the spring, releasing that other disc. Now, both discs are free - it releases 60 seconds worth of rementoir spring energy to rotate the two discs simultaneously, which flips the minute/hour disc on the dial. The entire process then repeats for the next 60 seconds.
My theory is that the Rementoir is designed this way so that its easier for Lange to finely adjust the green seconds hand wheel+roller jewel and the Y-bridge to release exactly at 60 seconds. The other fine tolerance is to adjust the Y-bridge pallet jewels relative to the purple and yellow discs so they release/insert at the right moment at ~52 seconds in.
It could also be that since you have a newer Zeitwerk, that Lange might have "updated" or adjusted the tolerances differently. Refer to Point 3...
(Image also from Deployant @ Peter Chong) For Question 3, all images I've seen of the Zeitwerk so far has the single piece bridge. I haven't seen any pictures of a separate bridge like yours, interesting! Do you have any other photos of it (e.g. at an angle)?
Regards,
skyeriding
login to reply

By: Thomahof : August 12th, 2017-08:22
And the people explaining the movement features must surely be crazy too.

I'm a university professor of psychology - I know crazy when I see it.

By: skyeriding : August 12th, 2017-11:27
"During the transition of the Y-bridge to the right hand side into the gap the yellow disc the lower blue wheel is turning very slightly before it is stopped by the grey gear wheel of the yellow disc." < this is what I was trying to describe the priming that occurs. That "turning very slightly" occurs due to the very tiny misalignment/gap between the pallet jewel of the Y-lever, and the little notch of the yellow gear.
Just to make sure we are on the same page, the "Grey gear wheels" under the colored discs are effectively one rigid part - they are firmly connected via the screw in the circular slot on the opposite side of the notch. This screw allows finetuning/adjustment of the rementoir priming timing via the Watchmaker.
As for the stopping at 60 - I don't recall the Zeitwerk having such a mechanism either. It would need some substantial space to have that lever between the mainspring and the seconds hand/wheel to "halt" it at 60. In theory, I would've thought that the seconds hand would stop anywhere between say, 45-59 seconds; as that is when the resistance of the rementoir spring being charged up is the most that the depleted mainspring couldn't overcome anymore. It is after the "60s rementoir jump" that having the rementoir reset means also having the least resistance, that the mainspring could still continue.
Regards,
skyeriding
login to reply
By: Dan003 : August 12th, 2017-16:34
I understand more clearer now regarding the possible causes for the differences observed between my Zeitwerk and those on the YouTube..
login to reply

By: COUNT DE MONET : August 13th, 2017-02:12
You brought an interesting point to all our attentions.
These little details are highly important to us

By: COUNT DE MONET : August 13th, 2017-02:17
It is certainly an adjustment issue rather than an issue of the teeth profile.
Best
Moritz
login to reply