By: amanico : September 1st, 2011-00:02
While some are turning around the new ( unveiled last year, by the way ) Type XX Aeronavale Limited Edition, others are jumping on the Vintage model. 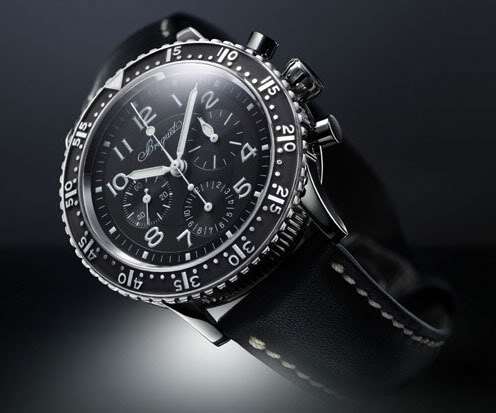 Now, in my opinion, there is a much better choice... The Type XX from the 70ies, which seems to be the closer to the LE introduced last year. 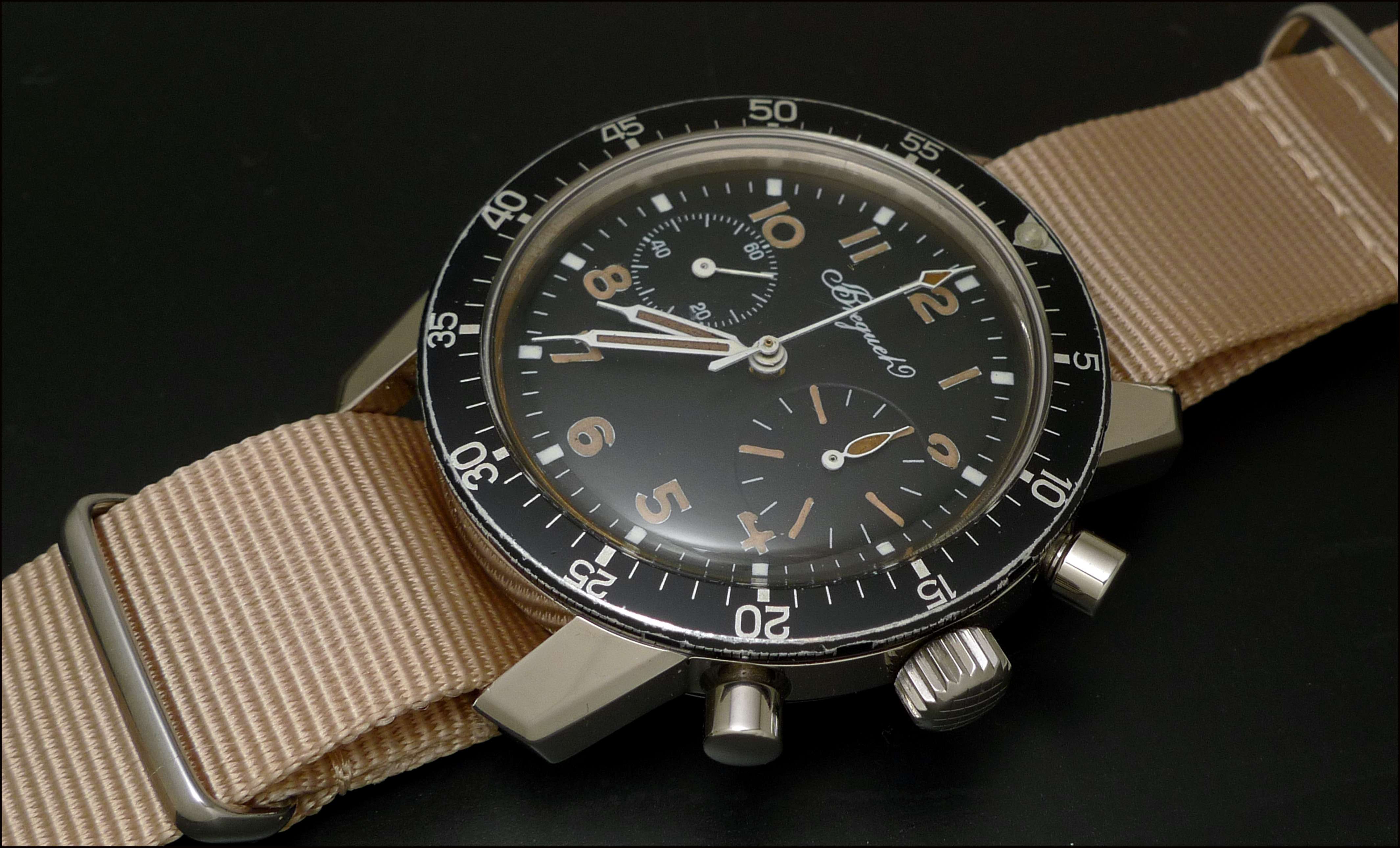 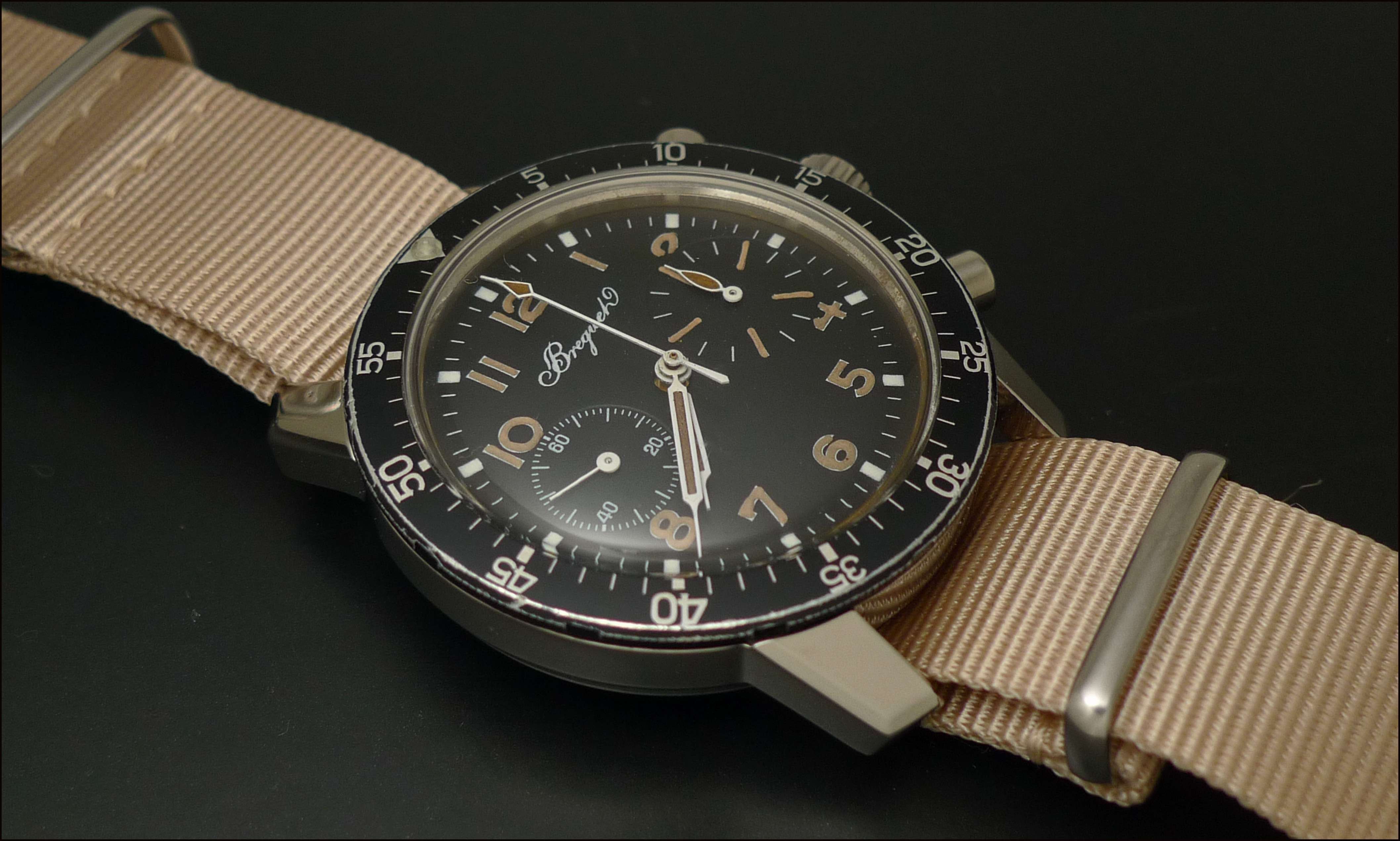 Because first, I much prefer 2 subdials Chronos than 3. I find the Vintage to be much cleaner than the LE.

Then, because the Vintage has its supplement of soul which makes a big difference, due to the patina of its indexes and hands.

And the case, which has much character on the vintage, with its flatter and larger lugs ( same case than the JLC Chrono Shark, for the same era, by the way ), which makes me think that Breguet and JLC used an outsourced case for their chrono. 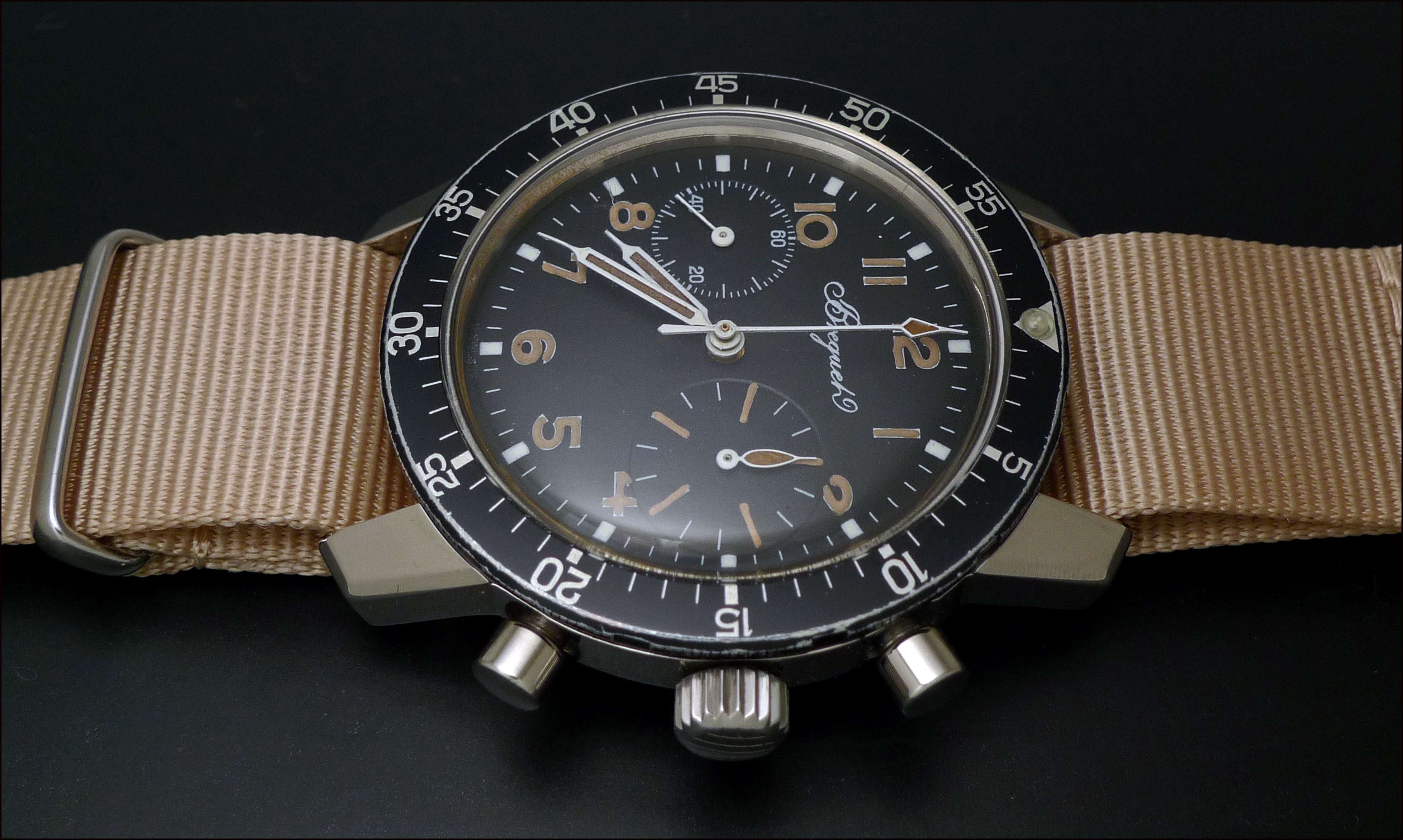 Did you notice the finish on the top of the crown, I mean, the gridwork? It is exactly the same than on the Vintage JLC Chrono Shark. 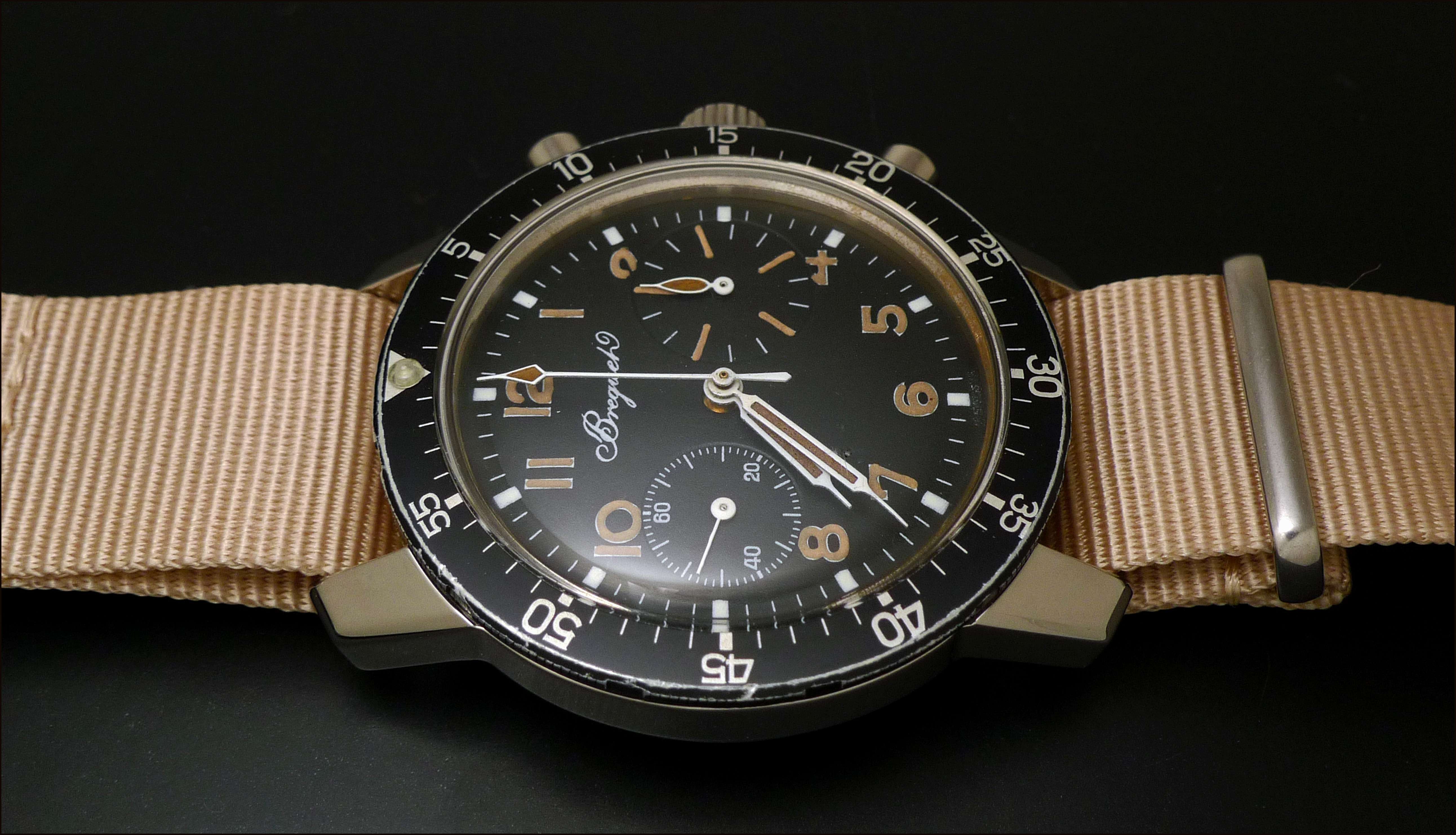 The watch came in its orginal orange yellow carton box, a nice SMALL one, which won't take too much place at home, but which is really the cherry on the cake.

I' let his owner reveal what the interior of the box contains... As well as the small other goodies...

Or maybe King of Cool? 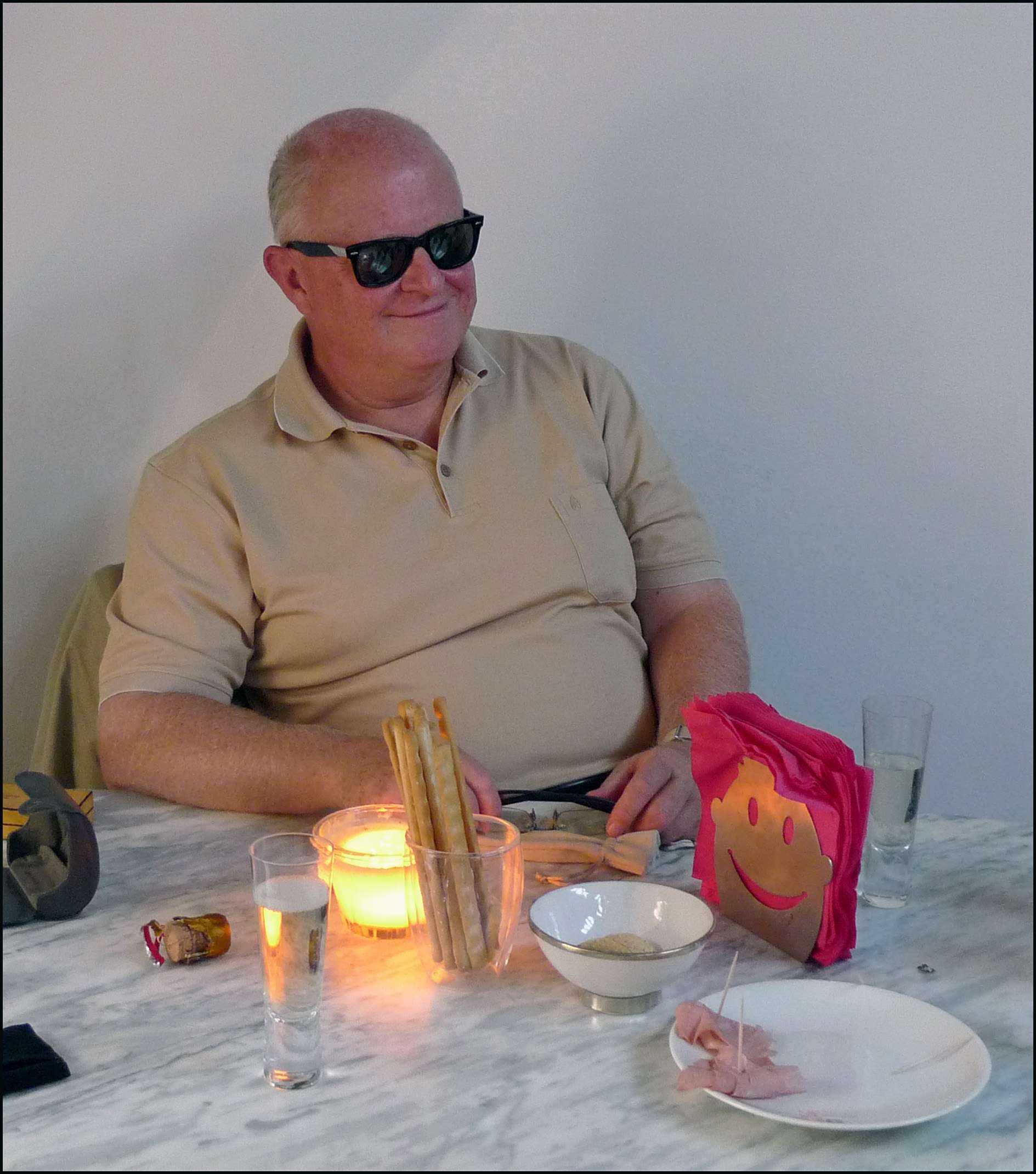 Your vintage observations are the cream on the top

The new LE doesn´t work for me, mainly because of the bezel.

This is really a delicious watch to have in any collection and with the original box, you kidding me!

PS. What's with the smiley face on the table?

And a cdertificate of authenticity.

Almost what I would call THE FULL SET.

As per the King of Cool, he's indeed super cool.

By: hs111 : September 1st, 2011-11:54
Well, my friend, as you may realize
-  this is my first post - entry on the Breguet forum, and a very happy one, as you already have realized:
So I will share part of my recent experiences during some memorable stretch of days, where I was able to realize a little dream - Little ?
- For me, as a humble  novice to Breguet, definitely not little,  quite the contrary - absolutely significant and adorable
( actually had been attracted by this  or similar XX's pieces already for a while, but not knowing what I was to expect, to experience
-  Hence,  also as you Nico, have  been encouraging me a bit ,
- with pleasure I'll follow up on the significant find, I had been fortunate to encounter recently:
Nico's pics above in the main post  say it all about the piece - an amazing Vintage beauty in every single aspect, IMHO
- So for now I'll make it short - thus , just the pics to complete the set and a little bit of the story's twist:
1/ the watch - you have seen above - just here; need no say no more.. 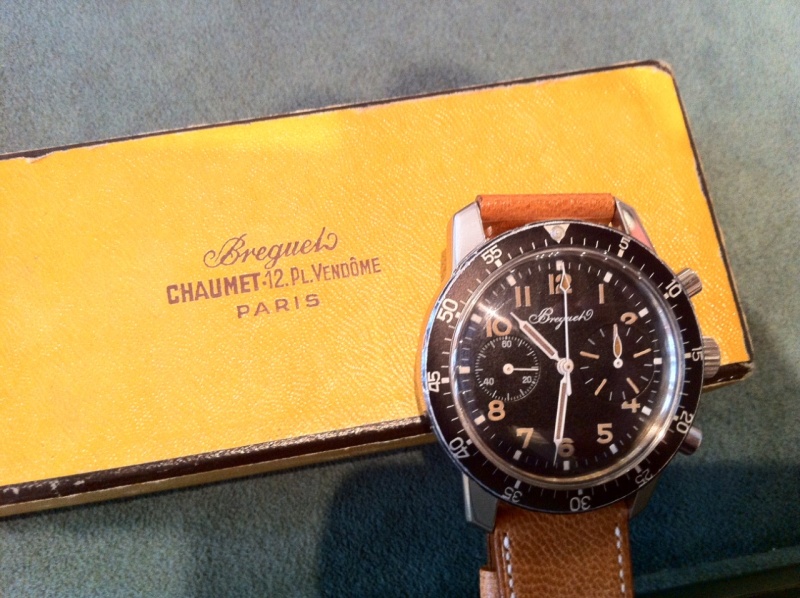 Vintage XX Chrono and The lovely Vintage original Box ( Cherry - 1)
- Already this beautiful, small  orange /yellow Chaumet - Breguet "containment" is pure pleasure, terrific shape, the edges very preserved - the colors match the indices..
2/ The Details and further  Cherries
- What else - look below: as we experience, the Horloger in fact has a Vintage Shopping bag to go with it , practically NOS it looks, it smells wonderful ! 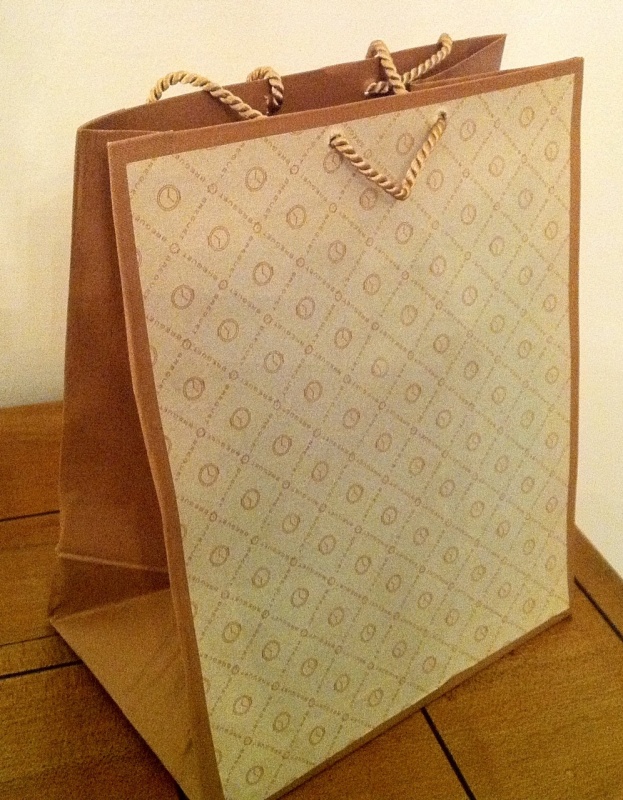 Cherry-2: The Vintage Shopping bag  - as if you would just have left the Breguet AD ..
But here next below:
the real catch, the  - how do you always say : the ultimate  Cherry on the cake ( here already the 3rd Cherry):
- we open the box and it displays part of the story:
One brother, in fact apparently  the owner of the plane, Jean Claude ( as I deducted) makes this watch as a present to his elder brother ( ".. grand freer Jaques" , as a Christmas present on 25-12-78
( sorry, my iPhone does not good justice initially for the beautiful handwriting - will have to re-do that..)
Alltogether, it leaves us, me for sure, pretty speechless  - Time has been touching us..
- Am quite moved by the strength of the moment .. 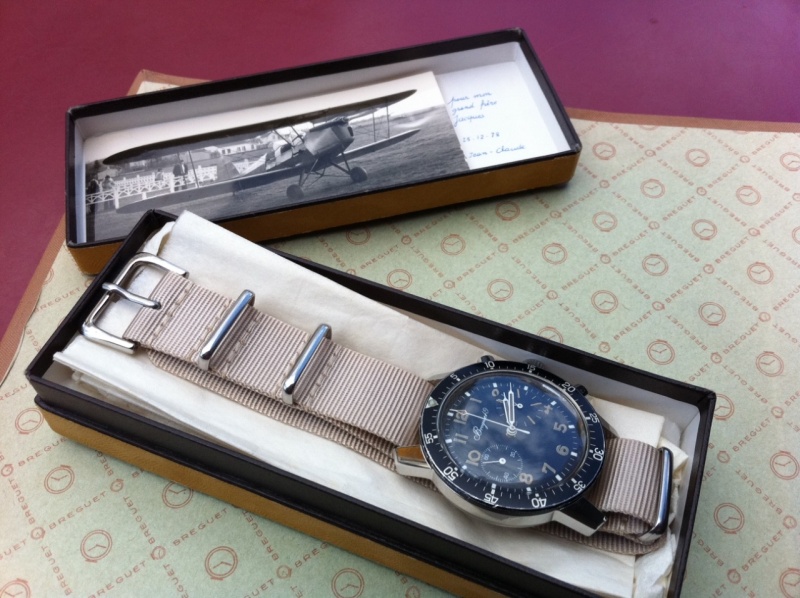 Cherry-3: Here the catch: The story is inside !
Thus, as you have said:
- an almost COMPLETE SET !   - A Breguet, my first one, in pristine condition all around ! - Thus,  an amazing find with a wonderful story !

Again here, thank you also for encouragement ! ( Not always easy when watch budgets are already pretty stretched, BTW.. )
- but here no real doubt, just happiness !!
(The certificate of authenticity to follow soon, actually together with a new strap,  matching even more the indices,
- but the light NATO I find terrific, as well .. - Will come back with more pics and feelings, if you  kindly allow. 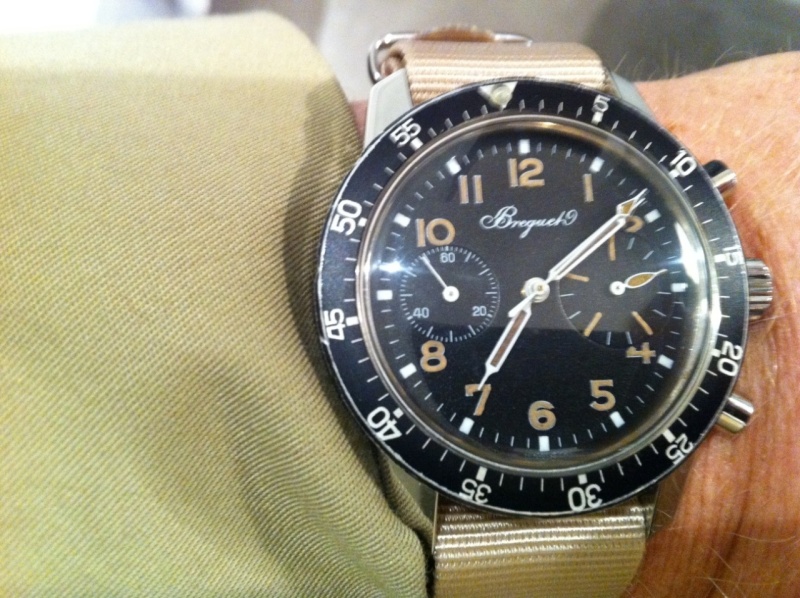 The obvious WS of the new owner .. REALLY cool, simply to adore !
Thus, indeed, a terrific find, a fantastic experience, thank you for such good company and being present at this endeavor and experience !
Happy and proud to be the new "present keeper", as they frequently but pretty wisely say in the Vintage Car domain.
"Will definitely hold thou good and dear - Welcome  my  Breguet  XX Chrono" !
Hope, (no am almost sure) you liked it , as much as I do ..
Best, hs
PS:
- Just realized this may have been my 1k post .. times have been flying recently
login to reply

Congrats to the great set and to your first 1K !

I know many more K’s will come soon…

And I will read them with pleasure!

You and me, Both have to find one of these beauties...

And with his speed, we will never catch up!

.. that the master(s) continue to teach us

Will try the best &
stay flexible and maneuver !

Best for a relaxing Sunday,
hs
login to reply

By: hs111 : September 1st, 2011-12:28
Indeed, it was a very fortunate find, moment and piece, augmented by the completeness of it,
- all this on a way coinciding with some little "round number" - but I truly  am happy, as you realized.
And as you pretty well know:
-  with Nico's long shadow in the back, one has to be always "en garde",
but this one is really a significant marvel for me, a significant step ..
Thank you again for these kind words,
best, hs
login to reply

By: Ares501 - Mr Green : September 1st, 2011-12:56
in the back one is bloodless sorry ...guardless..
yes indeed he is awesome person... so unselfish one of greatest
human characteristics in my opinion...
once again your Vintage just shadows re-edition completely I call it eclipse of the watch
D
login to reply

Glad also, you very much and kindly share our passion for that piece,
we both found stunning ..

You damn go fast, even with the number of your posts!

As for your pics, gthere are so many cherries on the cake that it must be a Schwartz Wald Torte.

All is so appealing here, from the watch, of course, to the delicious correct vintage box, the dedicace coming from the brother, to the bag ( !!! ).

More of the stroy will come with the attestation from Mr Breguet himself. Can't wait for that moment.

Best ( also to your lovely better half ).

By: hs111 : September 1st, 2011-12:19
.. how much I enjoy good company, these himself  great encounters and also to learn, to observe and to listen.
This time, young Padawan in fact made a big step, but not without encouragement and advice -
Thank you for that, again !
Apart from all the friendship expressed, (and I don't take that  all that for granted , be assured )..
And, BTW: I do not forget, that each King (the ones of "Cool" are no different) has been in need of a Consigliere or , with
some more appropriateness,  of a Cardinal Mazarin or such..
But equally so, it has been the spirit in this forum, this group of enthusiasts ( pretty crazy people at times..), and
specifically  also in your perfectly moderated  JLC realm ( my home domain) ,
- that has helped me along, and keeps the flame of my interest.
--  1000 posts  - 1k: I guess,  many and few at the same time
Thus, I will be doing my very best, to advance to Jedi,
- will take time, of course. - But will tr my very best !
First good, this time even significant steps steps have been done, also thanks to you and others,  in  so many aspects.
My very best ,
and likewise greating to the ladies !
hs

What a significant find, including the details, which may reveal some more twists.

The balance of the dial, the patina of hands and indices, but still the strength of this marvel
are a special treat - to look at, to enjoy, to reflect about.

But still it has a definitive functional aspect, a tool, but an awesome and iconic one;
- I guess , it's true that the time increments on the right sub-dial are 1 min/ 3 mins increments,
interesting for sure , as many others have 1 mins/ 5 mins - wonder why on this ?

As per the KoC on the last pic, for sure this person looks pretty relaxed - no wonder:
- mild sun, something to eat & drink , good company and obviously some happy thoughts
behind the coool glasses..

I heard that the King of Cool was so cool that he almost lost a watch...

More to be said, I guess.

By: hs111 : September 1st, 2011-06:46
.. to remain happy:
- indeed, when too many things happen simultaneously or
in hilarious sequence,
then it takes a strong mind not to get distracted..

In fact, was such a terrific time, that I realized:

1/ you have to be lucky at first
2/ hope for good friends with a kind mind & a bit patience
3/ stay focused but humble
4/ but when the time comes, be decided
5/ happy go lucky .. 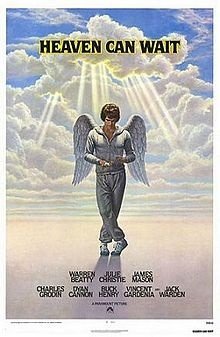 Will tell the story of a near loss and some cherries to a beauty shortly,
likely before the bell tolls late evening
Best, hs

PS: is the guy looking at His WATCH ??
- I can't get the (imageshack) pic loader working from my iPhone yet,
so low res/ small scale ;-/ by Private Gallery only
Thus, pls bear with me until tonight ..

I see them through the sunglasses...

A kind of Lucifurious representation.

The King of Cool is back!

So, you returned to Paris with out me, HS?!

I am a bit disappointed…

I see you still have your Speedy Gonzales shoes on!

Blomman, drooling over my keyboard…

This is a watch I would ADORE to include into my collection, truly.

To make the pair with my platinum Type XX, and what a PAIR!

Oh, that would be an awesome pair!

One day… I will try to shape up!