Jan 16, 2012,06:21 AM
The Radiomir, one of the icons of international haute horlogerie, lives again in the new Radiomir California 3 Days and the Radiomir S.L.C. 3 Days, two models which represent a tribute to the history of Officine Panerai and to the watch which has constituted a fundamental milestone in the history of professional diver’s watchmaking.

Many of the characteristics of the two new Radiomir watches are directly descended from the prototype created by Panerai in 1936 to equip the commandos of the Royal Italian Navy: the cushion case in steel with a diameter of 47mm, the slender wire strap attachments, the conical crown and the simple dial reduced to essentials to increase legibility to the maximum even in conditions of very poor light. The element which differs in the two models is the dial design. 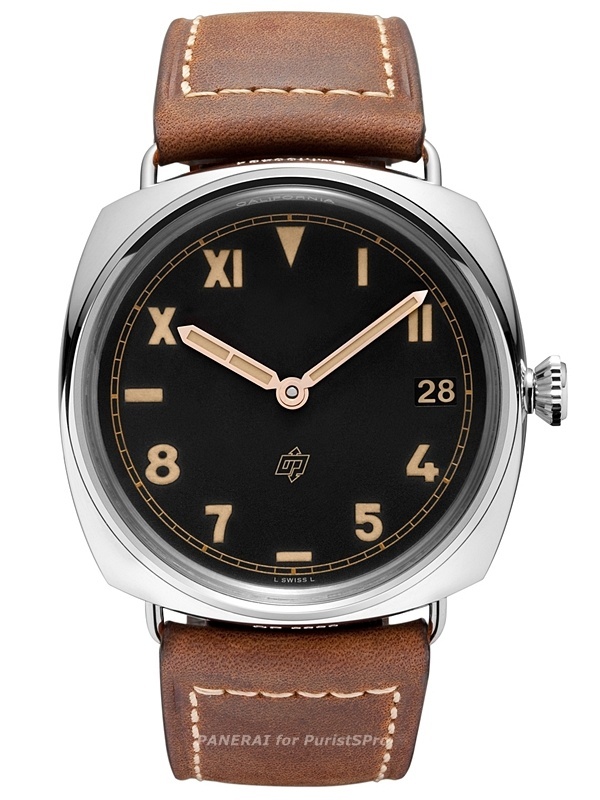 The Radiomir California 3 Days has the dial which was almost certainly the first one fitted to the Radiomir case, very original with its alternation of markers, Arabic figures and Roman numerals. The design of the dial is enhanced by the OP logo, the inscription “CALIFORNIA” engraved on the flange at 12 o’clock and the little date window at 3 o’clock.

The Radiomir S.L.C. 3 Days also has a historic dial of strongly minimalist design, with alternating bar and dot-shaped hour markers. This version was probably created in the late 1930s to experiment with the sandwich construction of the dial, in which two plates are filled with a layer of luminous material – today Super-LumiNova® – the luminescence of which emerges through apertures corresponding to the markers cut in the upper plate. The name of this watch refers  to the “Siluro a Lento Corsa” (S.L.C.), the slow-speed torpedo on which the commandos of the Royal Italian Navy rode during their heroic underwater missions, equipped with Panerai watches and instruments. A slow-speed torpedo is drawn in relief on the dial and the inscription “S.L.C.” is engraved on the flange at 12 o’clock.

The movement is a hand-wound mechanical calibre, like the historic watches, but brought upto-date to meet the highest standards of today.

Both models are fitted with the sophisticated P.3000 manufacture calibre, completely developed in the Officine Panerai manufacture. With a diameter of 16½ lignes, the P.3000 has the typical structure of large bridges, two spring barrels giving a power reserve of three days and a balance wheel 13.2 mm in diameter with variable inertia, enabling the rate of the watch to be adjusted through external screws on the rim. The movement is visible through the crystal on the back.

The Radiomir California 3 Days (PAM00424) and the Radiomir S.L.C. 3 Days (PAM00425) form part of the Historic Collection and are supplied with a cambered sapphire crystal and a brown leather strap fastened by a polished steel buckle inspired by period models. 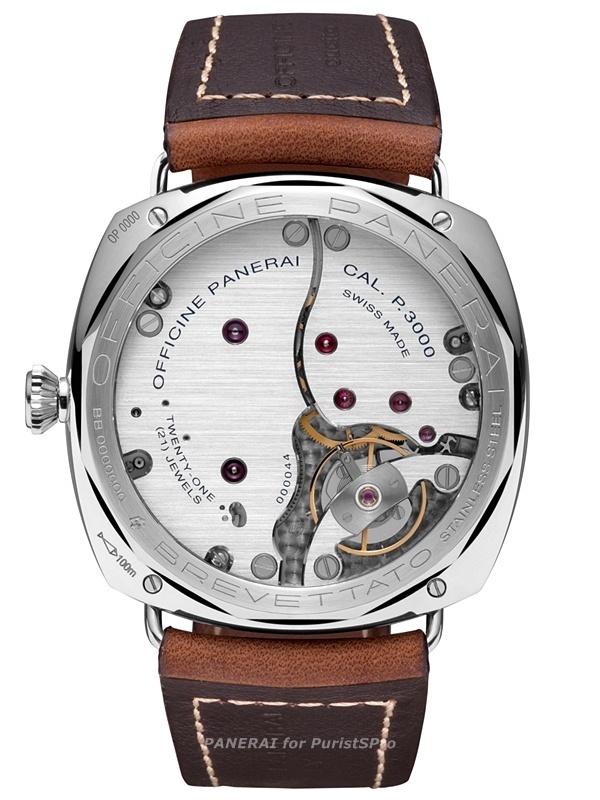