Submersibles. The Green 1238 (55K Euro) and the Blue 1239 (29K Euro). They can be found on their website. I have to admit, I Googled G-shock, to check a couple of details I thought they might have in common. I have no comments 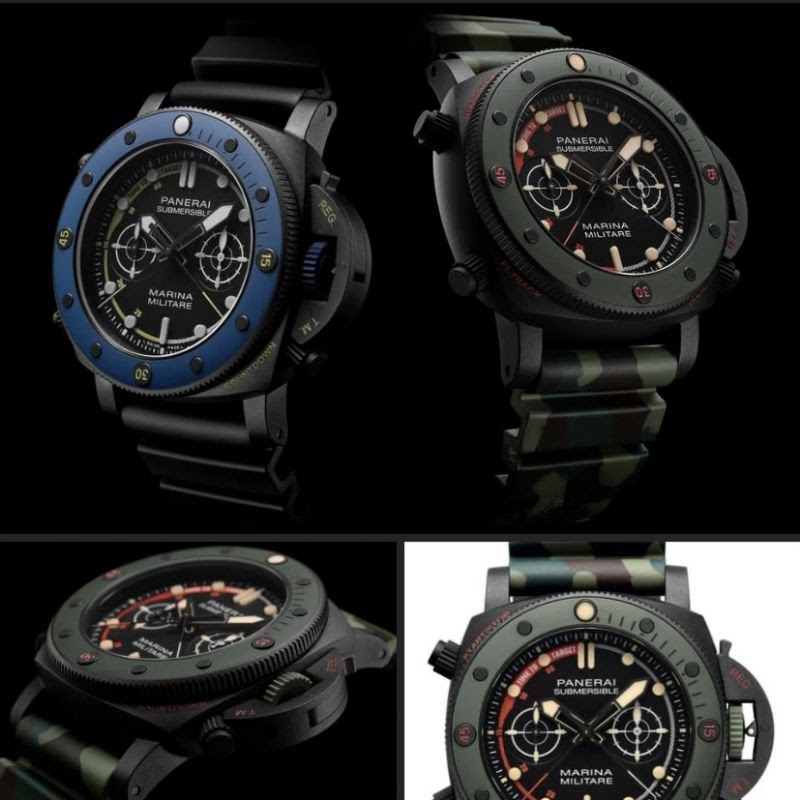 What? Where's the date window?

I like the Black/Green one, on the right guy I think it would look amazing🦾

By: Brandon Skinner : September 20th, 2022-23:12
I can’t stand the pushers on the opposite side of the crown however… those have always drove me nuts.
login to reply

Sergio, are you okay? You might need a couple days to recover after this Panerai release! LOL!

By: John-E-Mac : September 20th, 2022-23:27
Personally, I find this release interesting, but don't know what to make of it. Does the Special Forces Experience come with a night-time HALO jump? -John
login to reply

By: sergio : September 20th, 2022-23:55
...the Panerai policy and I have parted ways, there is nothing that would "throw" me. As the Floyds sing...I've become comfortably numb
login to reply

Understood. That is why I found it interesting that you posted this release. I was thinking your fingertips were burning as you typed your post.

By: John-E-Mac : September 21st, 2022-00:39
I have felt that many brands have left their faithful at the station as the train departed. One good thing about Panerai, is that they produced a solid back catalog of items that are available in the secondary market. Plenty to choose from and many to for...
login to reply

I wish I had vintage models...

By: sergio : September 21st, 2022-15:07
never got around to buy one. Just a couple of Pre-V and Pre-A models. When I got "swept off my feet" by Panerai, the vintage models' market was a...slippery slope. Too many people trying to ride the wave and and the chances of running into a "Franken mode...
login to reply

Aaaah, now we are speaking!

By: sergio : September 21st, 2022-15:29
recesses of my PC to get this picture. This is when Panerai and I....departed from one another. I call this the Panerai-frying pan, since is so remiscent of the legendary Rickenbecker guitar Lolllllllllll ...
login to reply

You know their is a delete button on your keyboard. 😉

By: sergio : September 21st, 2022-18:17
some things must be preserved. Lest we...forget Lollllllllllll
login to reply

+1, a lot of the Paneristis have disappeared now, just holding on the the older watches that still mean something to them.

I am with you, here.

Are those real?? And if so, what target are we talking about?

"Target" is what struck me, too. What the heck? One's mind can take you off into a dark corner if you thought about it...

Well, Nico asked for a no date submersible

By: Arronax : September 21st, 2022-01:49
The powers that be listened but I can't help, something tells me we are looking at a case of lost in translation
login to reply

For the same price than the " less " expensive of these 2, I would go for a Logo Pre Vendome and a 662 everyday!

Which is very possible to do!

By: Cookies : September 21st, 2022-02:49
A nicer version of the old Zenith Defy Xtreme series. But my only gripe is, with the specs of pieces, is it worth $48k? One can think of a similar piece from Blancpain - the flyback bathyscaphe, and it is 1/3 of the price and comes with a ceramic case. Nu...
login to reply

As ugly as hell

How odd… to see these ever placed in the Firenze

By: enjoythemusic : September 21st, 2022-14:29
Very fashionable for MIL types, though I prefer space exploration and human advancement over destruction.
login to reply