OFFICINE PANERAI PRESENTS TWO NEW TABLE CLOCKS INCORPORATING THE P.5000 MOVEMENT, HAND-WOUND WITH A POWER RESERVE OF EIGHT DAYS, WITH THE CLASSIC DIALS WHICH HAVE WRITTEN THE HISTORY OF THE BRAND ENCLOSED IN A PERFECTLY TRANSPARENT MINERAL GLASS SPHERE. 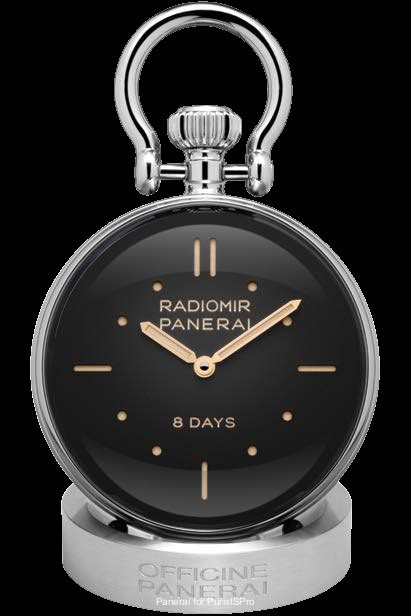 The new Panerai Table Clock has the perfection of a sphere: a sphere of transparent mineral glass, which encloses a dial that has become part of timekeeping history, and a Manufacture mechanical movement with a power reserve of eight days.

The new Panerai Table Clock is available in two versions, identical except for the graphics and structure of the dial. The first (PAM00641) has the sandwich dial with the S.L.C. design, the most mysterious and minimalist of those developed in the history of Panerai, dating back to the end of the 1930s. It has dot markers at the hours and bar markers at the cardinal points and it was probably originally used on a test sample, for supply to the Italian Navy which did not then follow it up. The denomination “S.L.C.” refers to the legendary Siluri a Lenta Corsa, the human torpedoes which were ridden by the commandos during their missions equipped with Panerai instruments. The magnifying effect of the sphere also enables the engraving on the black dial to be admired, including the words “8 days” referring to the power reserve of the timepiece. 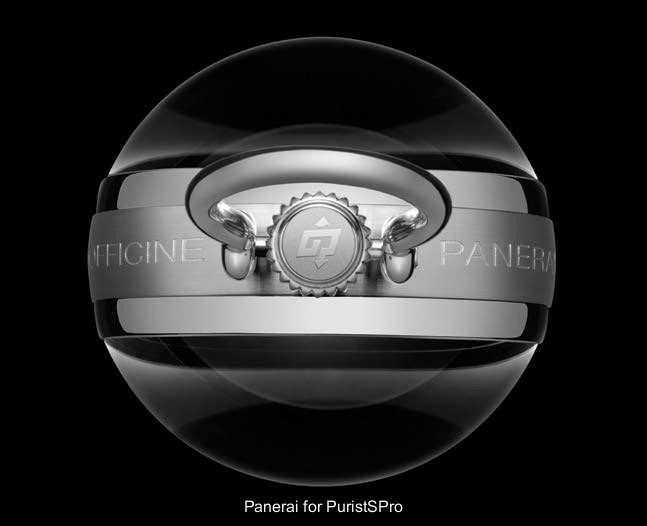 The sphere of the second Table Clock (PAM00651) encloses a California dial, the first of all the dials in the history of Panerai, which appeared on the first watch supplied to the Navy in 1936. The name “California” came about some time ago as a result of the particular popularity of this dial design – consisting of Arabic and Roman numerals and alternating markers – in California during the 1980s, and it is very much appreciated by collectors and enthusiasts of the brand because of its historic importance and originality.

The two new versions of the Table Clock create a remarkable triptych together with the first model of this series (PAM00581), which has the most classic and iconic of the three historic Panerai dials: the one with bar markers and numerals at the cardinal points.

The movement of the Table Clock is the Manufacture P.5000 calibre, hand-wound and with a power reserve of eight days; its inspiration is historical in that it is derived from the Angelus movements of some vintage Panerai watches. A long running time is very useful for a table clock, enabling the winding crown to be left alone for a whole week because of the energy stored in the two spring barrels. The calibre has a solid, strong construction, with the mechanism almost entirely enclosed between two plates which cover the majority of the wheelwork, leaving only a few details visible, such as the balance wheel and the intermediate wheel, as well as the sophisticated finish.

The large winding crown at 12 o’clock is surrounded by a loop made of AISI 316L stainless steel with a polished finish. Its original design was inspired by the shackle, the connecting link commonly used on sailing yachts to secure ropes or steel cables simply and safely: a subtle, evocative reminder of the world of the sea, with which Officine Panerai preserves its historic link which inspires every new collection. An elegant round base, made of brushed steel and personalised with the engraved words “Officine Panerai”, enables the sphere (65 mm in diameter) to rest safely on the table. 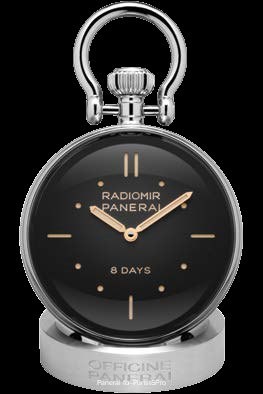 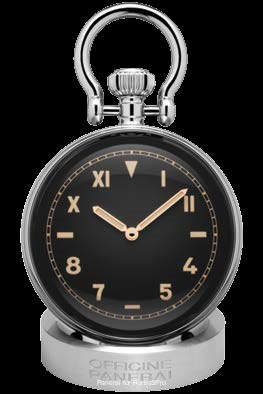 By: AnthonyTsai : September 30th, 2015-10:17
PANERAI TABLE CLOCK OFFICINE PANERAI PRESENTS TWO NEW TABLE CLOCKS INCORPORATING THE P.5000 MOVEMENT, HAND-WOUND WITH A POWER RESERVE OF EIGHT DAYS, WITH THE CLASSIC DIALS WHICH HAVE WRITTEN THE HISTORY OF THE BRAND ENCLOSED IN A PERFECTLY TRANSPARENT MIN...
login to reply

By: Grisar : April 4th, 2021-11:53
The table clocks do look great and I'm actually very much surprised how reasonably they are priced, at 2900 EUR in Europe retail. Can any owner share some user's experience? Many thanks.
login to reply