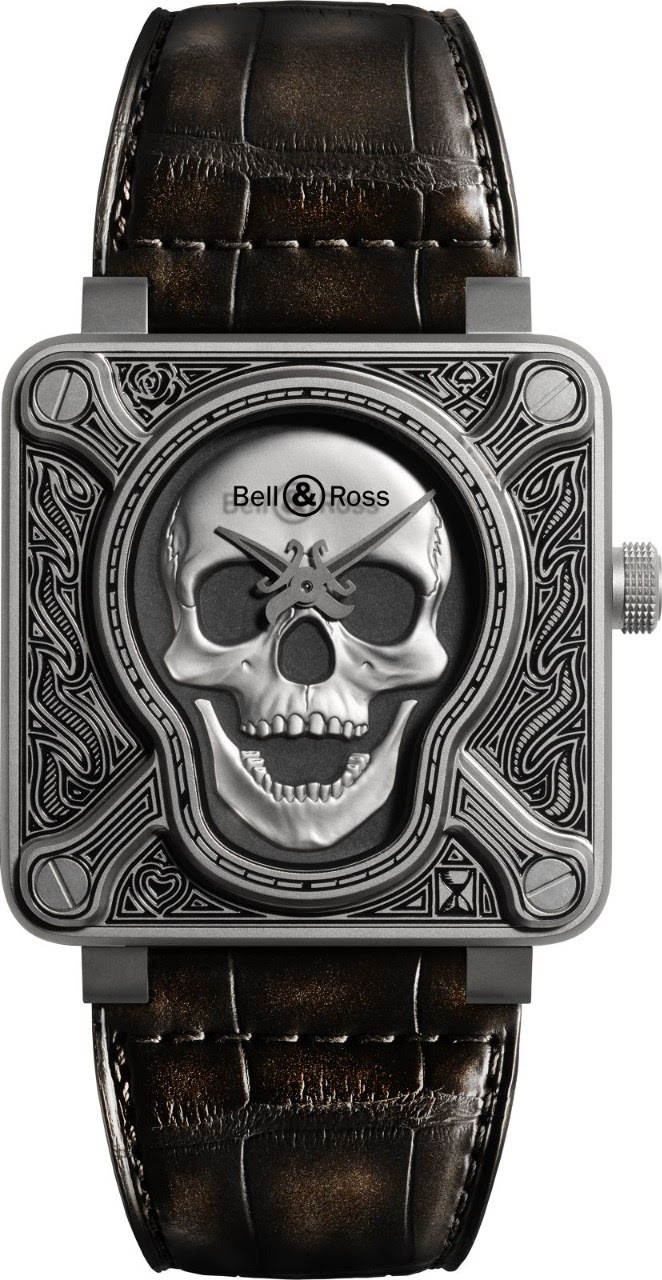 In 2009, Bell & Ross made a lasting impression by breaking with traditional watchmaking codes for its very first BR 01 «Skull». A remarkable version was unveiled in 2015, in the form of the BR 01 SKULL BRONZE. And the story of the now famous Bell & Ross skull has taken yet another twist with the revelation of an extraordinary new face. This brand new version is a celebration of military symbolism and the art of tattooing.

Each of the BR 01 Skull collections pays its own unique tribute to the legendary parachutists of the Second World War. Emerging from the skies at dawn on 6th June 1944, the troops of the 82nd and 101st American airborne divisions played a vital role in the Normandy landings. On their jumpsuits, these elite fighters proudly wore an insignia bearing a skull and the words: «Death from Above», both to intimidate their opponents and to ward off ill fortune.

Today, the legendary «Jolly Rogers» still figures on military equipment, such as uniforms, emblems and aeroplanes as a decorative element that is used as a talisman or a rebel symbol. And what could be more symbolic than a tattoo, particularly one that depicts an image as striking as the fires of hell? So was born the BR 01 BURNING SKULL. 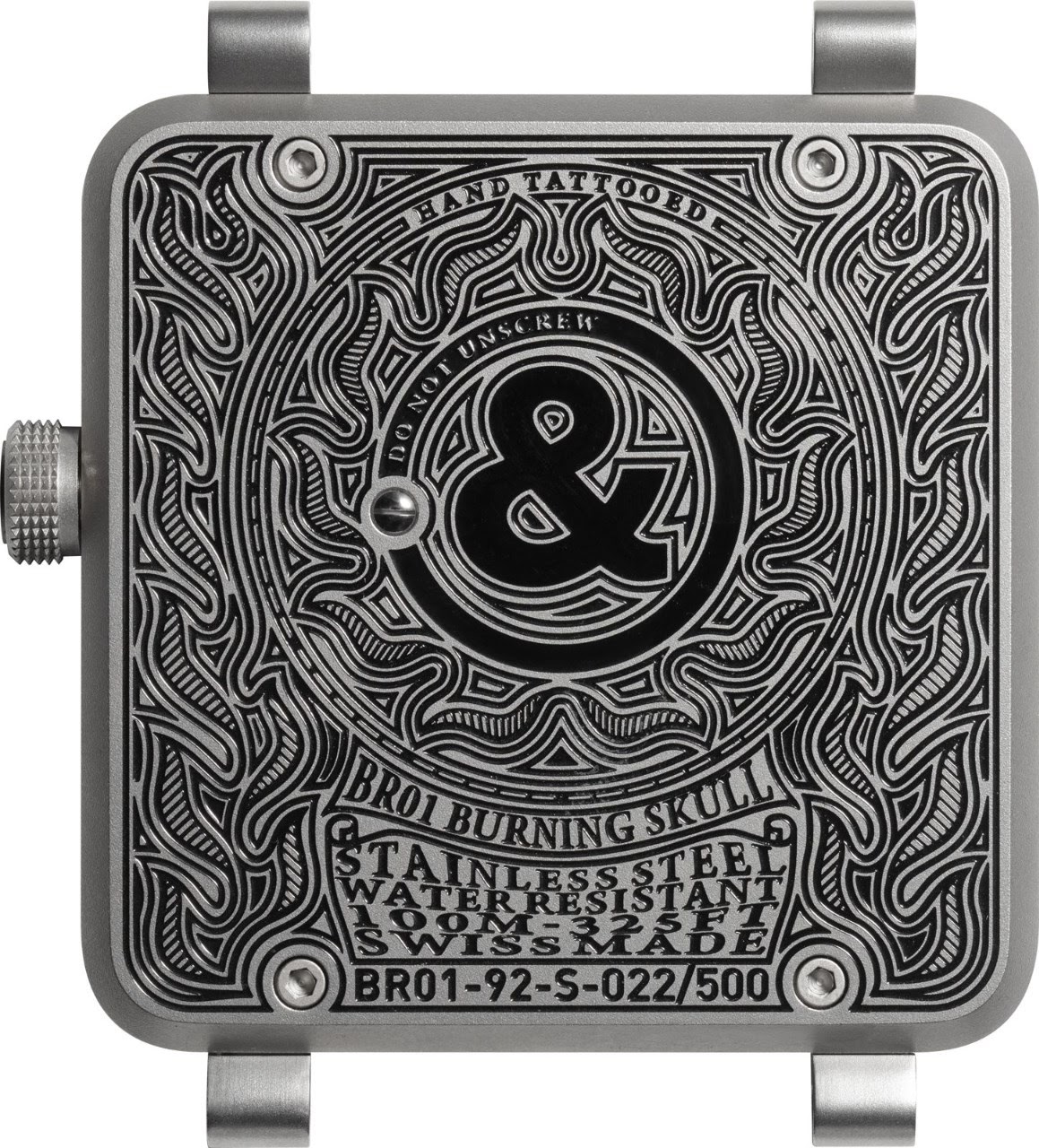 Faithful to the spirit of the 1944 parachutists and their emblem, which resembled the pirate flags of the past, the BR 01 BURNING SKULL displays the skull and crossbones, perfectly placed within the lines of the iconic square case of the Bell & Ross brand. Sporting the colour of steel with a black background serving as a showcase, the relief dial features hour and minute hands that reveal other traditional motifs from the military world: the dagger and the sword. The matt appearance of the metal and the muted reflections from the alligator strap enhance the watch’s adventurous and combative image.

intaglio for the tattoo

Despite its provocative aspect, the skull is not the only unusual decoration on the watch. The entire case surrounding the dial is fully engraved and decorated in the style of a tattoo. Evoking some of the most striking designs used to decorate the skin, the watch is emblazoned with sparks flying in all directions, on both the front and back, with an array of details covering every surface and recess. 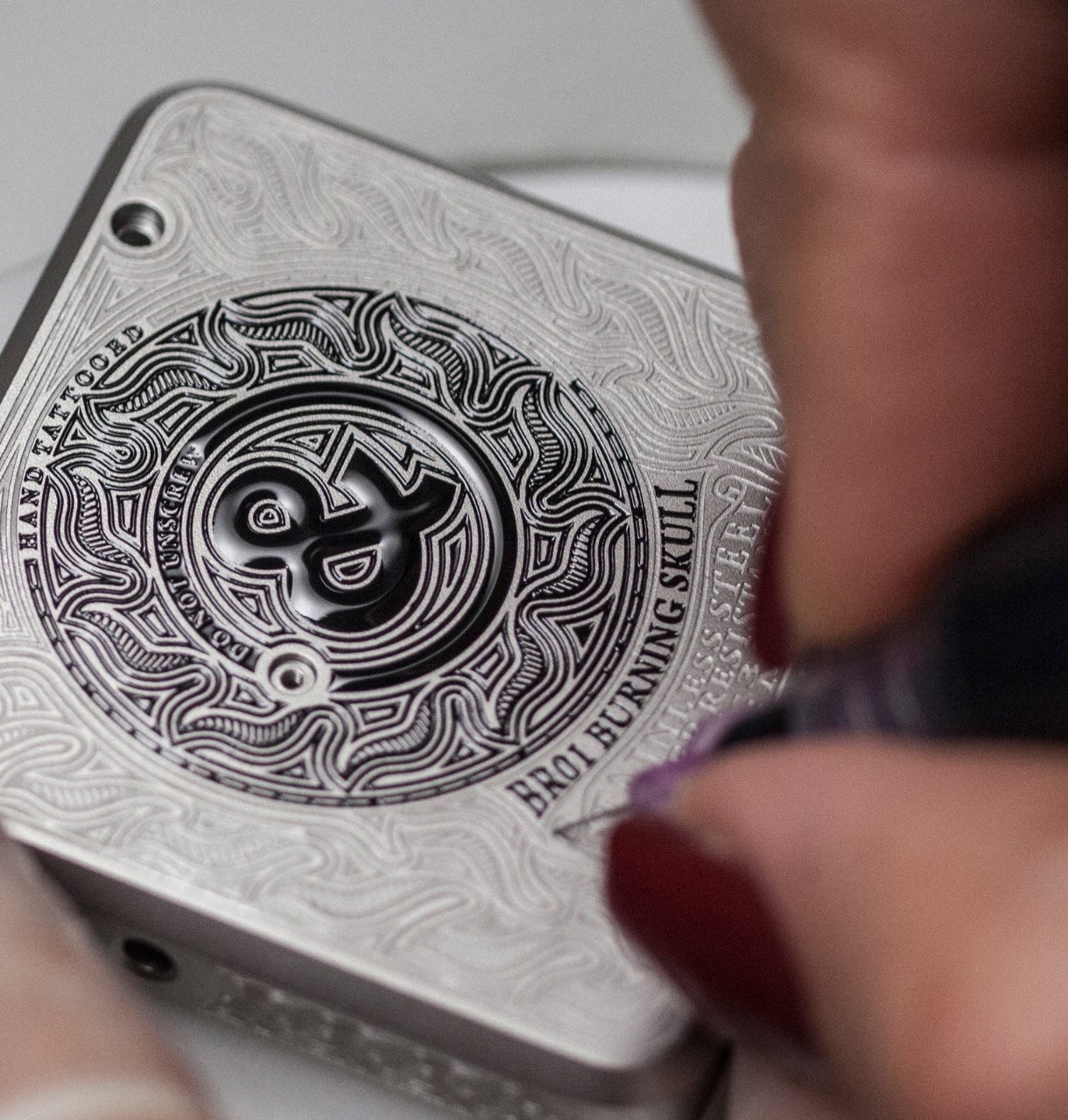 Turn the watch over, and even the visible inscriptions on the case-back seem to be taken from a real tattoo, with the curved letters appearing to follow the contours of an arm. Its bold, edgy graphics recall the mythical fires of hell, and include numerous motifs symbolising destiny and mortality: a heart, a rose, a scythe and an hourglass, lurking within the decoration.

To create this effect, each line engraved into the steel is filled manually, using a stylus, with a black ink/varnish, just like a tattoo artist decorating the skin. During the process, the piece is fired several times in an oven to fix the lacquer. It is a long and painstaking job, and it takes the engraver/ lacquerer several hours to finish each case. Once these stages are complete, the black lacquer underscores the watch’s graphic identity through the interplay of balance and contrast between light and dark tones.

The steady hand, expertise, experience and artistic mastery required for this work on the steel of the BR 01 BURNING SKULL closely match the skills of the tattoo artist…

Relief engraving for the skull

The realism of the skull in the centre of the «tattoo» is reinforced by the design of the dial on two levels, which brings a depth to the visual effect. The skull is created from stamped metal, a process traditionally used for producing coins and medals, and which creates a true relief. The black SuperLuminova covering the dial face further accentuates the skull, intensifying its defiant stare. 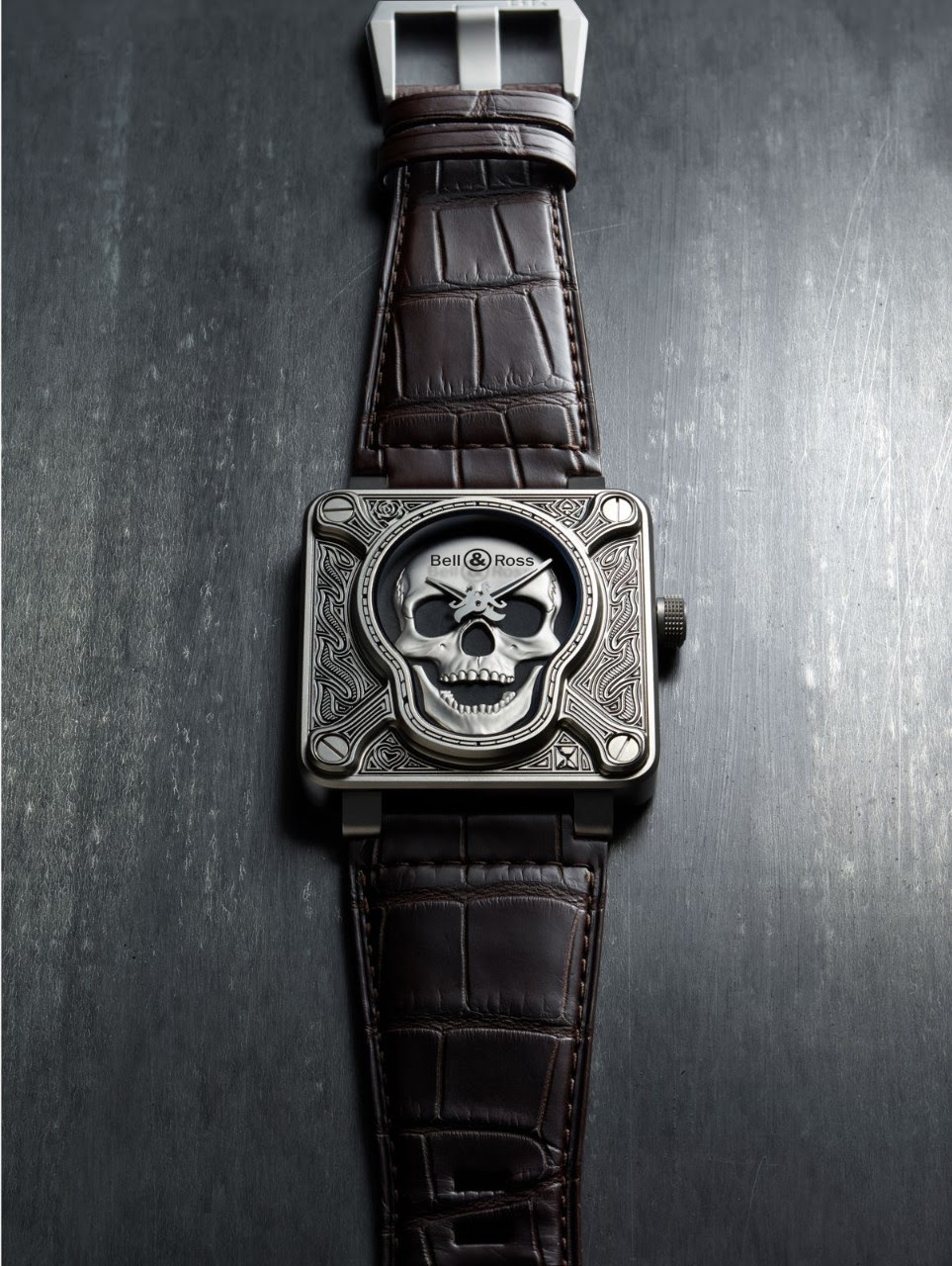 The military symbolism and exceptional craftsmanship of this watch make it truly one of a kind. The bellicose character and exquisite workmanship of the BR 01 BURNING SKULL add a fiery aura to the talismanic spirit of the original Skull model. The watch is available in a limited edition of 500 pieces, and will delight collectors and fans of idiosyncratic timepieces. 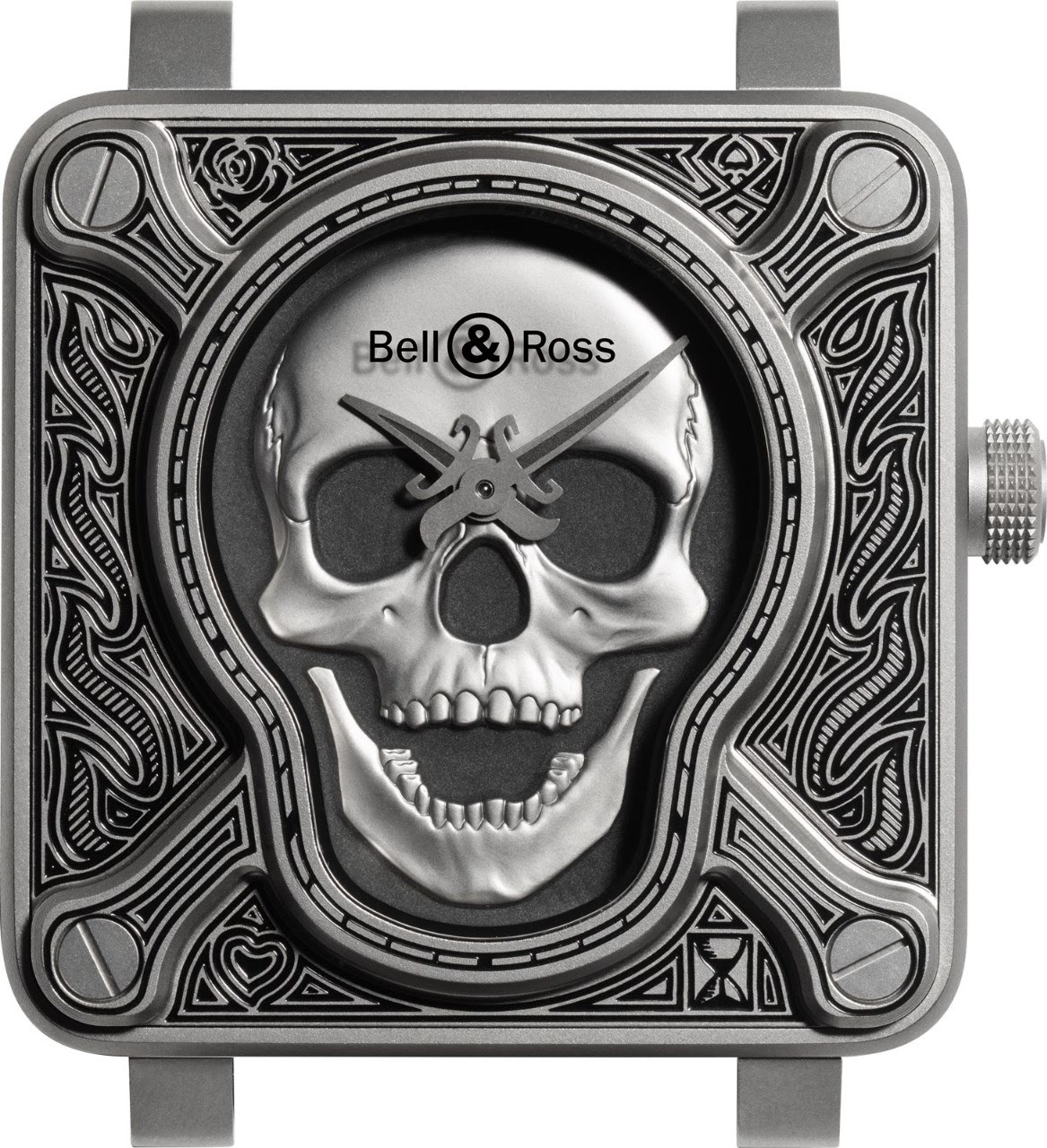 By: AnthonyTsai : September 2nd, 2016-16:29
BELL & ROSS BR 01 BURNING SKULL LIMITED EDITION OF 500 PIECES THE TALISMAN WATCH In 2009, Bell & Ross made a lasting impression by breaking with traditional watchmaking codes for its very first BR 01 «Skull». A remarkable version was unveiled in 2015, in ...
login to reply