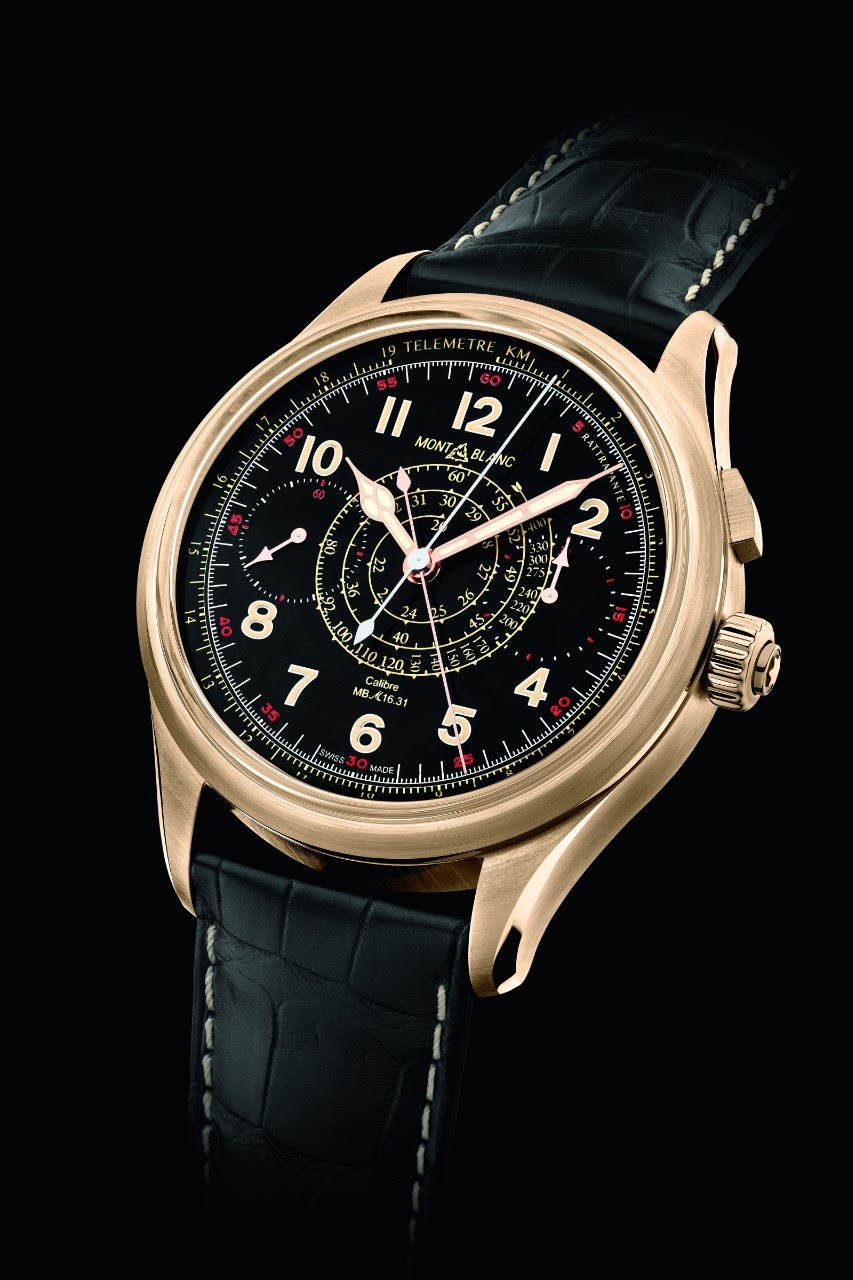 At the SIHH, this year, there were a few watches which deeply impressed me: The Jaeger-Lecoultre Gyrotourbillon 5, the Girard Perregaux La Esmeralda in white gold, the Vacheron Constantin Traditionnelle Twinbeat and... This Montblanc 1858 Split Second!
Let's say it straight, Montblanc did it again, after the 1858 Tachymeter from 2016, and the Montblanc 13.21 Green from 2018.
1858 Tachymeter, 2016, in steel or in rose gold: 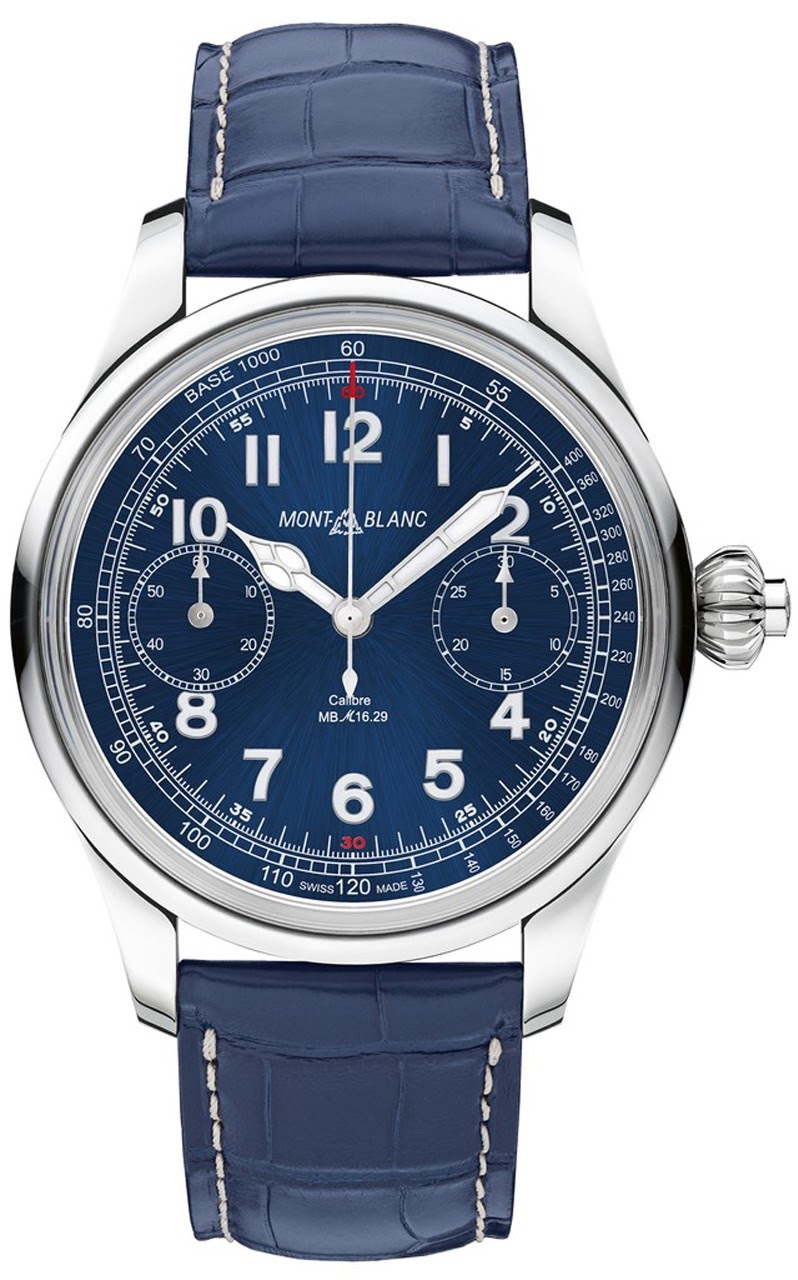 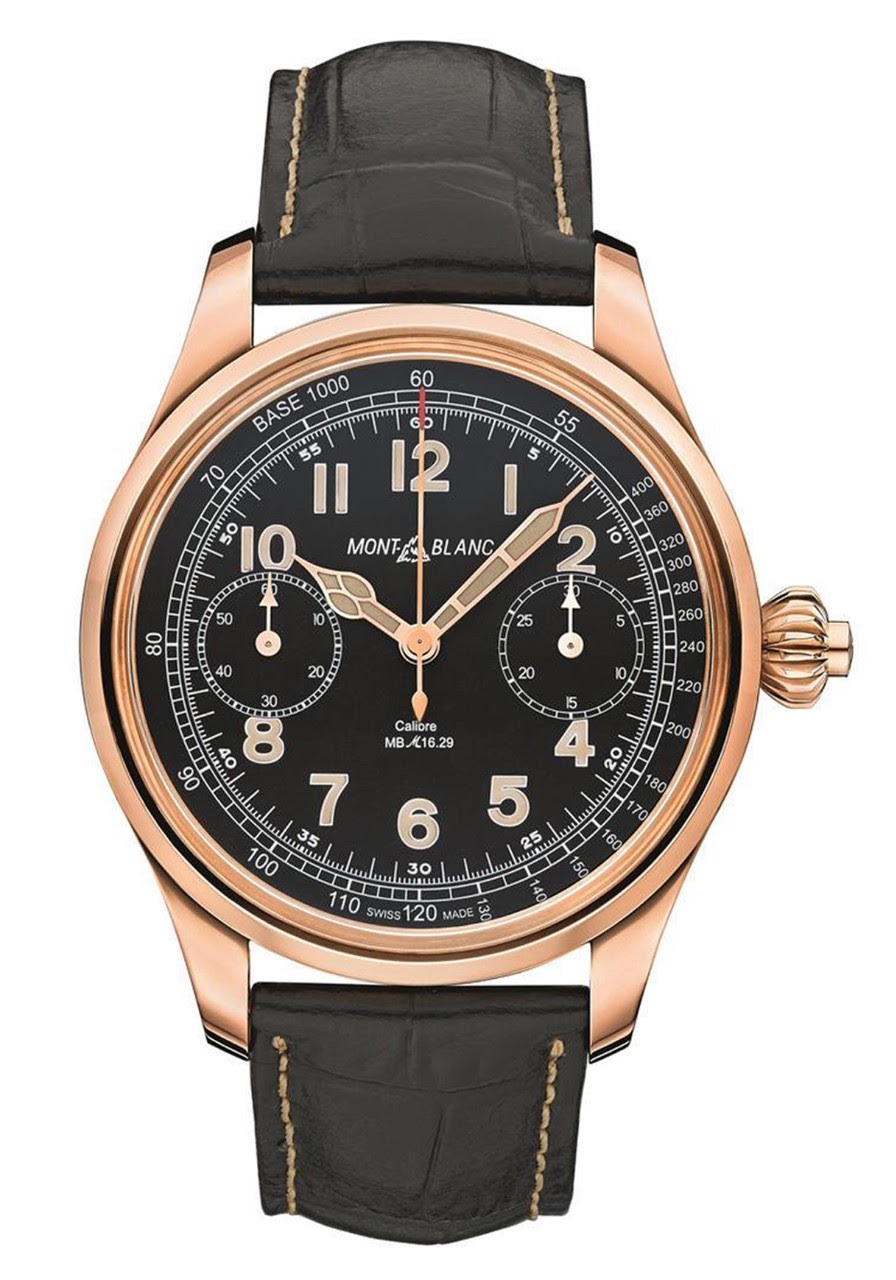 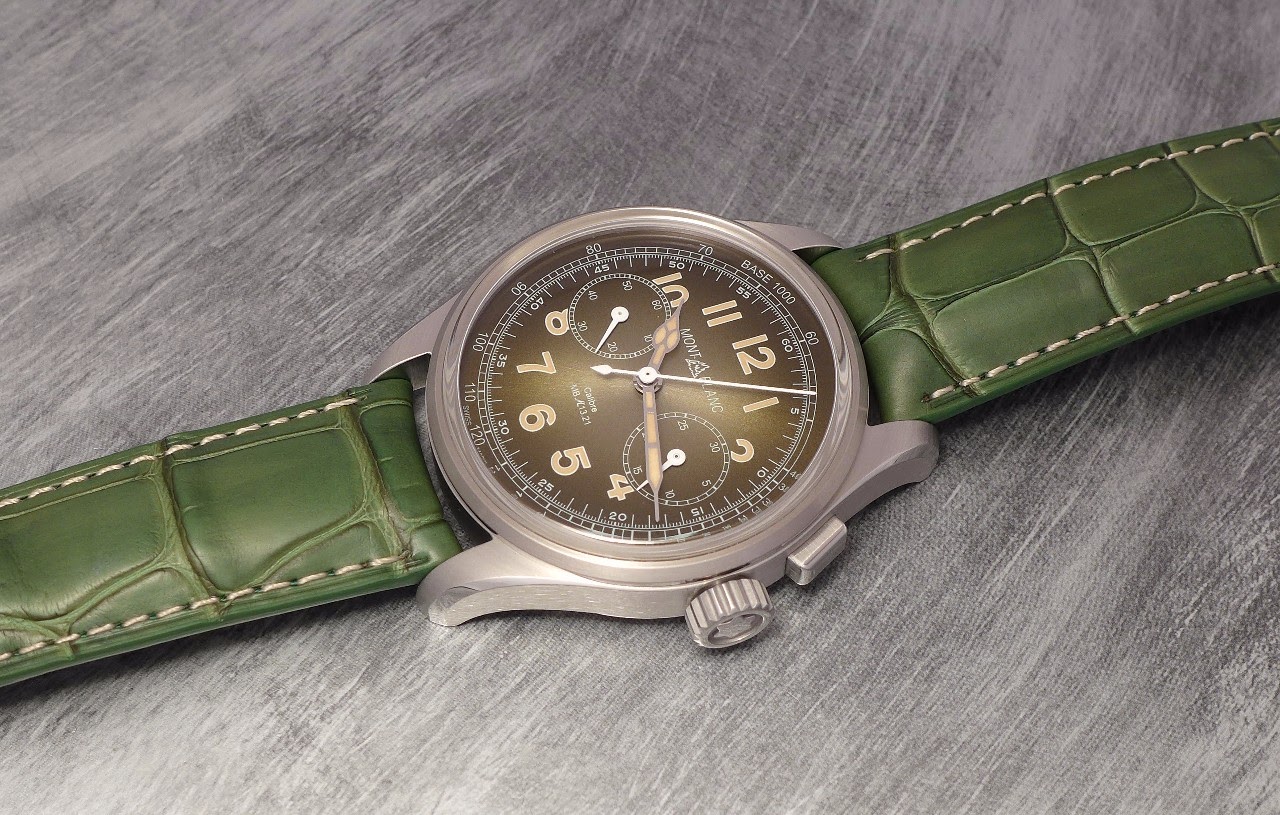 This year, Montblanc unveiled the king of Chronographs, a Rattrapante ( Split Second ) and a fine one! 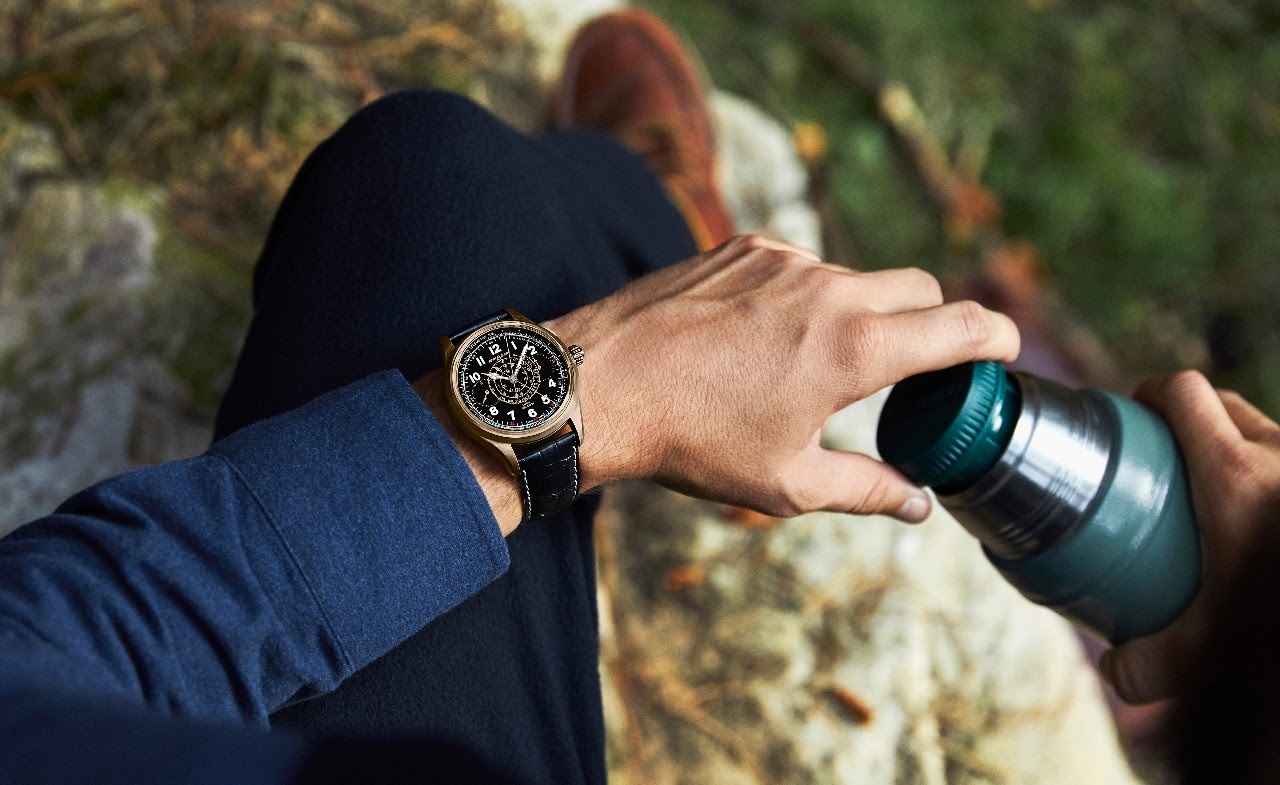 If automatic Split Seconds can be found here and there, there are only a few brands which launched a manual winding one. Patek, Lange, Glashutte and Richard Mille come to mind, Lange being the milestone of the category with a double ( seconds / minutes ), then a triple split ( seconds, minutes and hours ) last year.
The challenge that Montblanc achieved here is that the released a FINE Rattrapante, with a superbly finished movement, at a very fair price ( 32, 500 Euros, yes, you read correctly, I had to ask to two different people from Montblanc to get the price confirmed ).
Let's see this new 1858 Split Second in the details:
1/ The movement, the true star of the watch.
The Cal 16.31 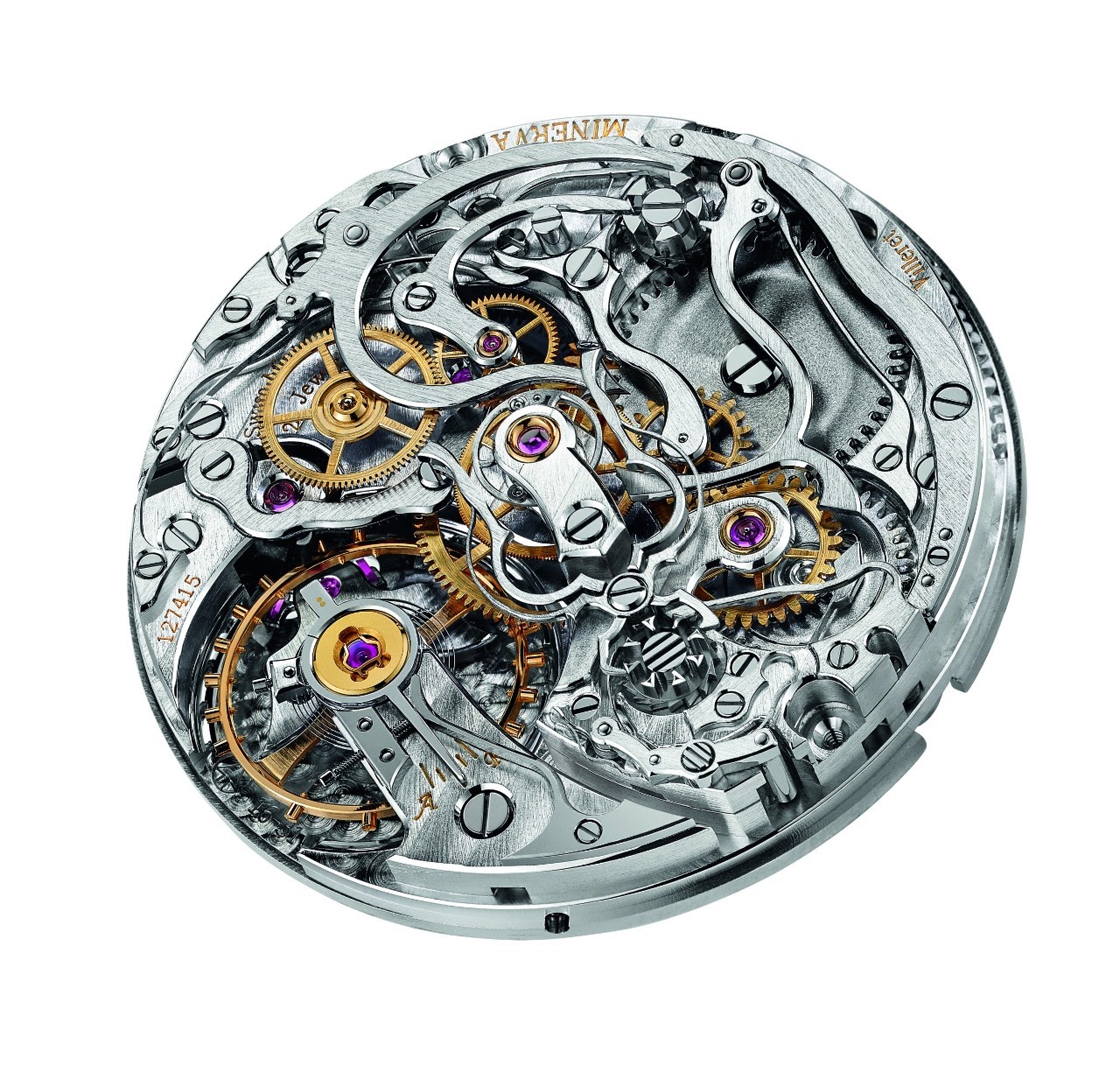 The Calibre 16.31 seems to be the well known 16.29 in which Montblanc added a superb Rattrapante mechanism. When you compare the 16.29 and the 16.31, they are very close to each other, the big difference being the characteristic double pliers and double column wheel  of the split second.
The visual outcome is even more sculptural than the " show " offered by the 16.29. And this is also due to the high level of finishings of the parts with all the traditional elements such as perlage, anglage, Côtes de Genève, mirror polish of some parts, and even this famous " Devil's Tail ( in fact a chronograph break lever ) here hidden under one of the pliers.
Let's not forget the huge balance wheel which is 14, 5 mm big, assuming that it is based on the 16.29. 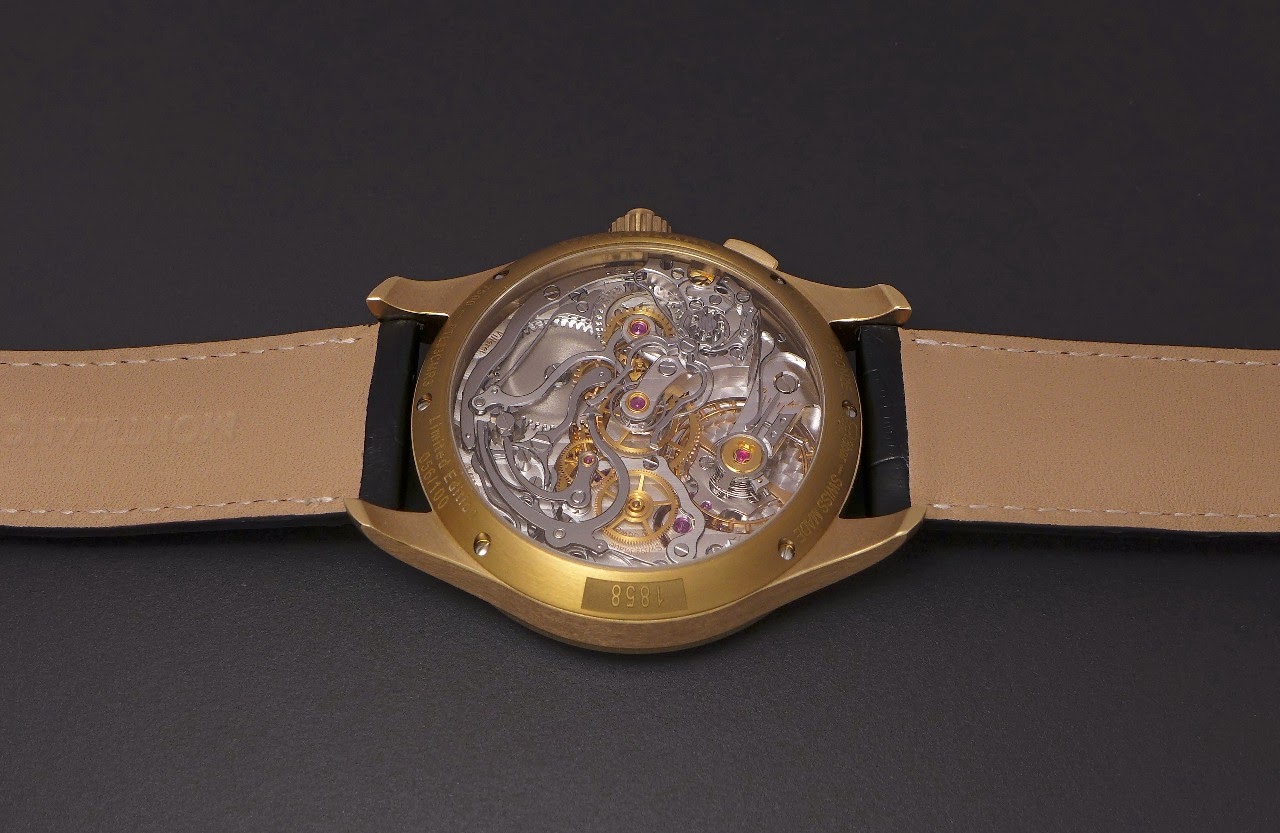 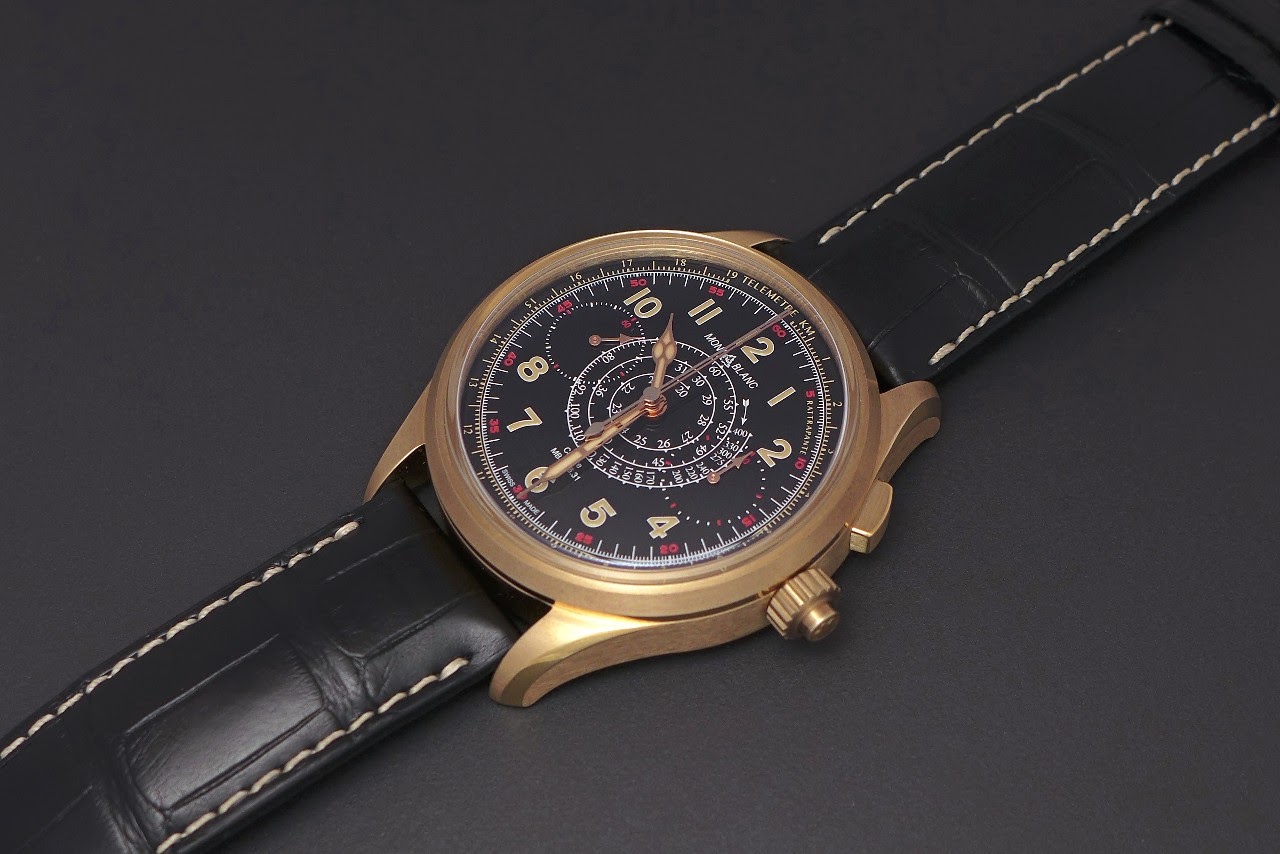 Still, it is thick, that's a fact. And even 1 mm thicker than the 1858 Tachymeter from 2016.
These proportion certainly have to be put in relation with the dimensions of the movement.
The case is made in an alloy of titanium and bronze, and I've been told by Montblanc that it will age in a brownish color rather than the greenish we see on some other bronze watches such as the Panerai and the Tudor, to mention a few of them.
A good point, compared to the 1858 Tachymeter from 2016, the lugs are generously beveled, which is a detail which clearly misses on mine. 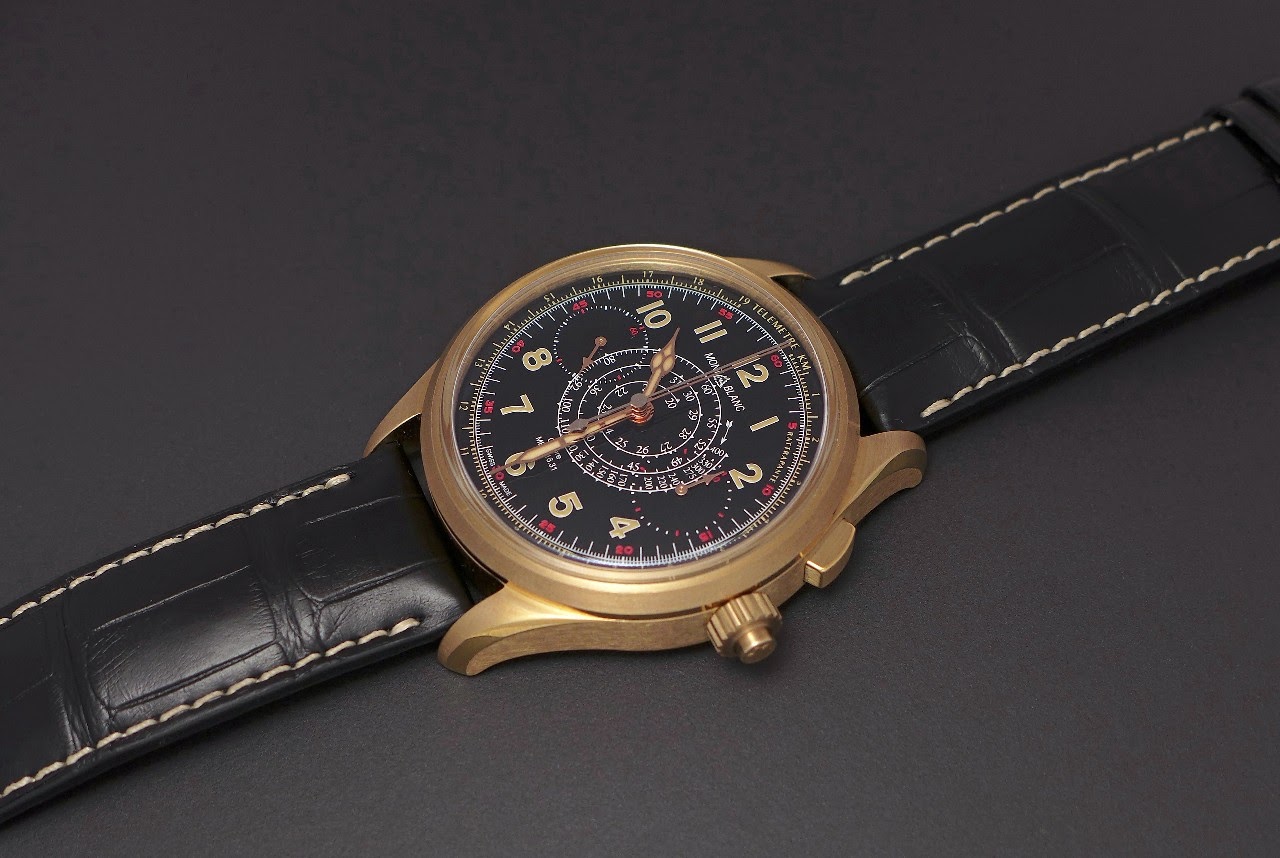 A not too good point, the bezel is a bit big for my taste. Still, not a deal breaker. 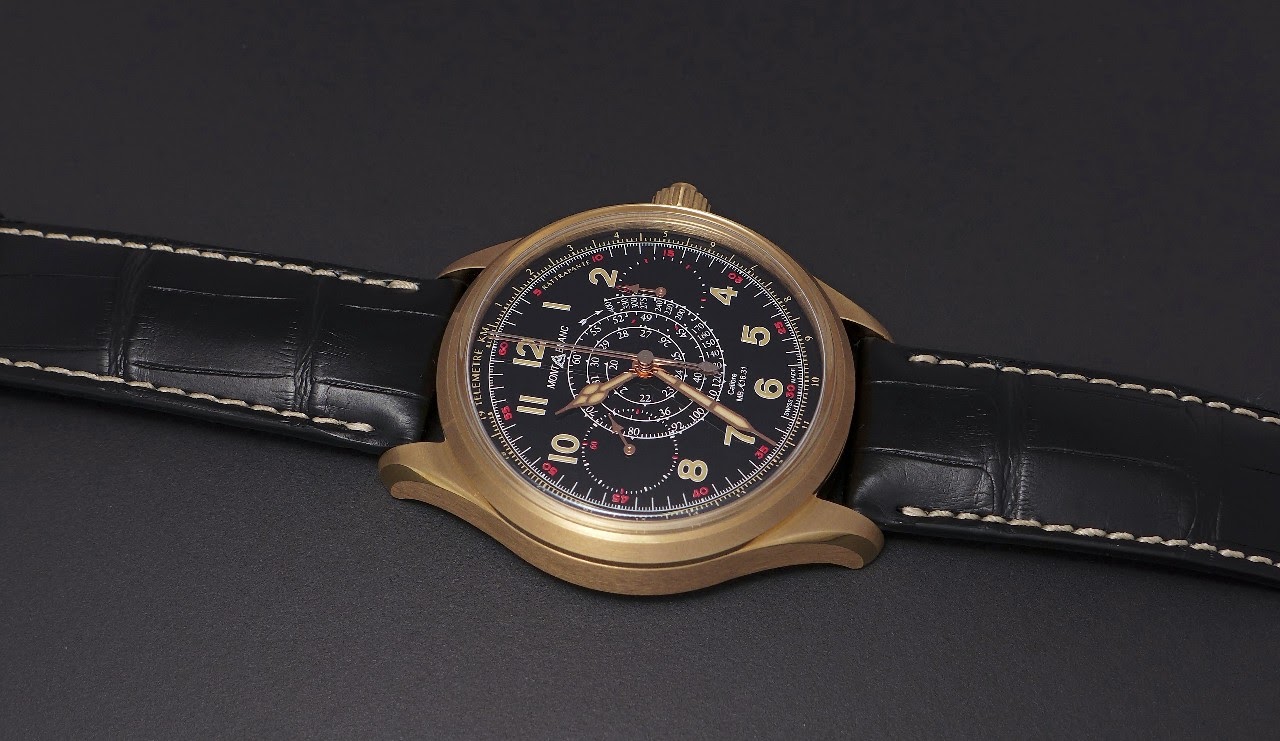 There are two pushers: One is on the side case at 2 o' clock, which is used for the Rattrapante, and one in the crown, which activates, stops and resets to zero the chronograph.
3/ The dial: A now classic from the 1858 Collection.
Good or bad? This dial is well known for some years, now. We saw it on the 1858 Chronographs, manual or automatic, with a difference, here, the Snail Tachymetric Scale, in addition to the regular Telemeter located on the outer part of the dial.
The 1858 Split Seconds has a deep black dial, contrasting with the écru hour markers, red seconds, the white tachymetric scale and the gilt telemeter and hands. 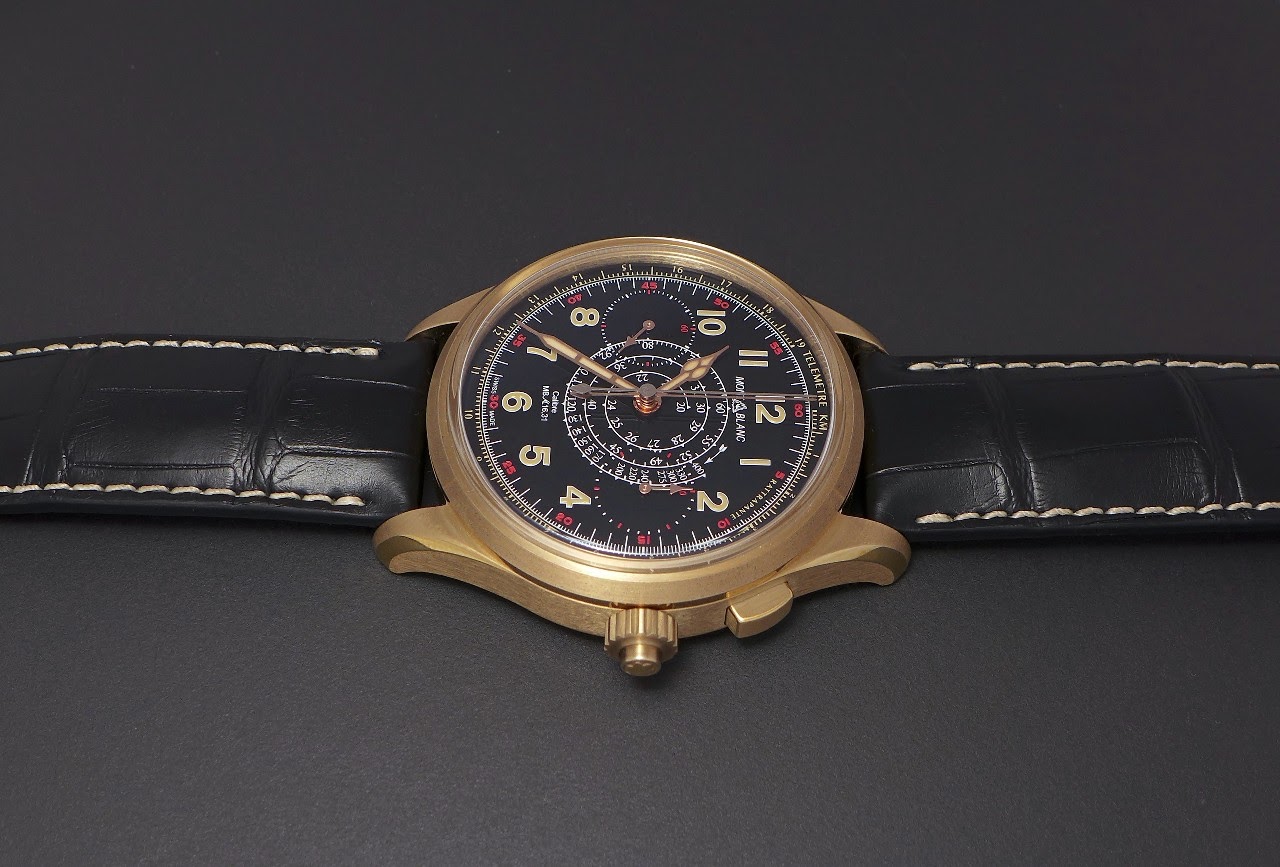 Busy, yes, but not lacking charm nor character, and linked to some chronographs from the 30's and 40's. 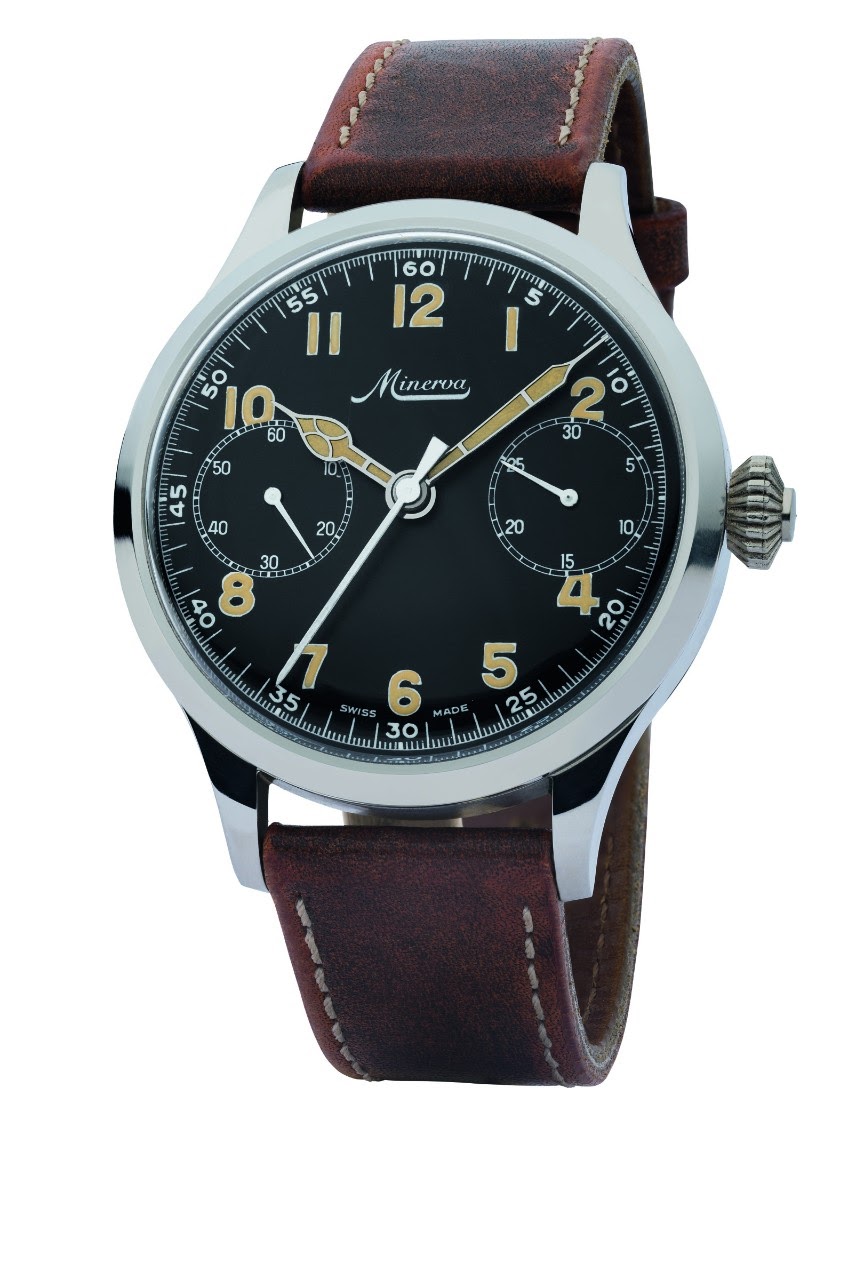 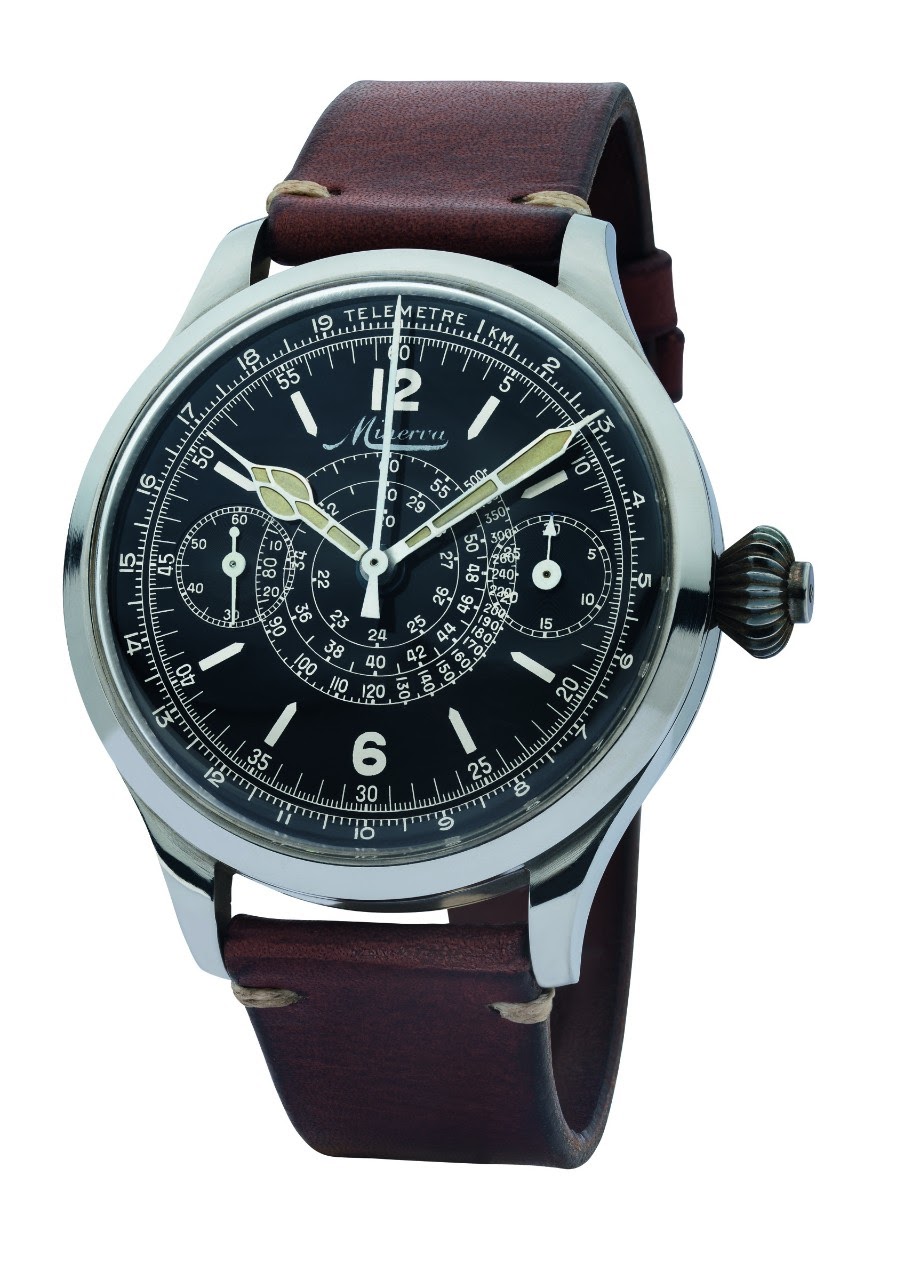 Protecting the dial, a lovely slightly domed sapphire glass.
So, disappointing or bewitching, this Rattrapante?
To tell you all, if it would have come in titanium only, or in steel, I would have already jumped on it.
I have the feeling, when I see the Montblanc strategy, that, maybe, in the two next years, we will have such a case for that Rattrapante. So, I prefer to wait.. Unless I have the guarantee that Montblanc will only make a " one shot " in bronze. In this case, I will go for it, without any hesitation.
I dream about a Rattrapante, and here I have a fine one. Not everything is perfect, especially the bezel and case thickness, but we are close to an excellent watch, with a lot of charm and a superlative movement. The whole thing at a bargain!
Looking forward to reading your comments and thoughts,
Best.
Nicolas

By: amanico : March 11th, 2019-04:26
At the SIHH, this year, there were a few watches which deeply impressed me: The Jaeger-Lecoultre Gyrotourbillon 5, the Girard Perregaux La Esmeralda in white gold, the Vacheron Constantin Traditionnelle Twinbeat and... This Montblanc 1858 Split Second! Le...
login to reply

Nice review! I would prefer it in Titanium. You are right though...

By: ZeroHour : March 11th, 2019-04:48
This watch is close to perfect, and at this price a no brainer! Sincerely and Respectfully Joseph
login to reply

Thanks for sharing your opinion, Joseph. The price was a real surprise for me as well! [nt]

By: Gelato Monster : March 11th, 2019-05:54
Do you think it will have good manufacturing standard and reliable vs problematic like the 1858 Tach?
login to reply

the snail dial is perfect match with bronze/warm metal

To be clear, if Montblanc decides to make the Split Second only in bronze, I will take it. If they do an iteration in white metal, I go for it. But I will get a split second! [nt]

Another winner for Montblanc.

By: TheMadDruid : March 11th, 2019-06:52
They’re doing amazing things with their chronographs. Maybe it feels smaller than its true size because you are used to a big chronograph (1858) and you probably expected a rattrapante to be bigger. Anyway, this should be the split for you.
login to reply

No, I think it feels smaller because of its bronze case. Surprising. I am just waiting to see if they will release one in a non bronze case, and I do hope so, because this movement is top. [nt]

By: Bruno.M1 : March 11th, 2019-07:58
is good for fun watches (Tudor, some IWC and heck even the overpriced Panerai) But when looking at a fantastic movement and even a split second, the grail among chronographs.... I think bronze is a mediocre material and for me not good enough I would dema...
login to reply

Agreed, Bruno. In any white metal case, I would go for it without any hesitation! [nt]

What a movement! Outstanding. [nt]

Yes, really. Give me a white metal case and I am in! [nt]

Very nice looking watch for sure!

By: Makilla : March 11th, 2019-15:25
i think it would look great in a steel or preferably a titanium case instead. As Bruno mentioned bronze is more of a fun watch and not for this kind of movement/complication. Reason why it feels smaller than 44mm is due to the busy dial and Internal subdi...
login to reply

Smooth, Laurent. Thanks for your feedback. I must confess that I share your views. [nt]

Whoa, that movement is insane!

By: jleno : March 11th, 2019-18:04
And incredible value for a split seconds chrono as well. Perhaps this qualifies as the ultimate "stealth bomber" watch?
login to reply

What a nickname! Yes, the movement is a milestone, for me, in terms of finishings. [nt]

By: Echi : March 11th, 2019-23:46
I do have this nagging question.. Given the size of the movement, would it have been possible to house it in a smaller case? Or will doing so awkwardly affect aesthetics? To match the elegant movement, I agree with the majority regarding the use of white ...
login to reply

By: Watcholic_id : March 13th, 2019-02:54
the movement is magnificent. and i really like the dial, gorgeous! unfortunately the size of the case is quite huge & thick due to the size of the movement nevertheless, it's still a superb watch. thanks for the fantastic review, Nico cheers
login to reply

My pleasure, my friend. This watch has to be tested in the real... It is a tad smaller on the wrist at the point I thought it was a 42 mm case! [nt]

would definitely love to try it in real life :) [nt]

Thanks for the detail reviews.

By: mj23 : March 15th, 2019-16:58
Really enjoyed reading it. It’s a true feast for the eyes! I do also hope they will release SS or titanium models in the near future. And I think they will! This one is too good to just release it once.
login to reply

I am totally with you on a steel or titanium version! Thanks for commenting, mj23. [nt]

Fully agreed with you on the case material, Nico!

By: KMII : March 28th, 2019-00:06
My clear preference would be titanium. I guess the thicker bezel makes the watch look a bit smaller, like you mentioned - so not a killer for me. Like you I hope for a different case material first 👍🏻
login to reply

Titanium or steel, I don't care, but a slight preference for titanium as well. Please, Montblanc, please!!! [nt]