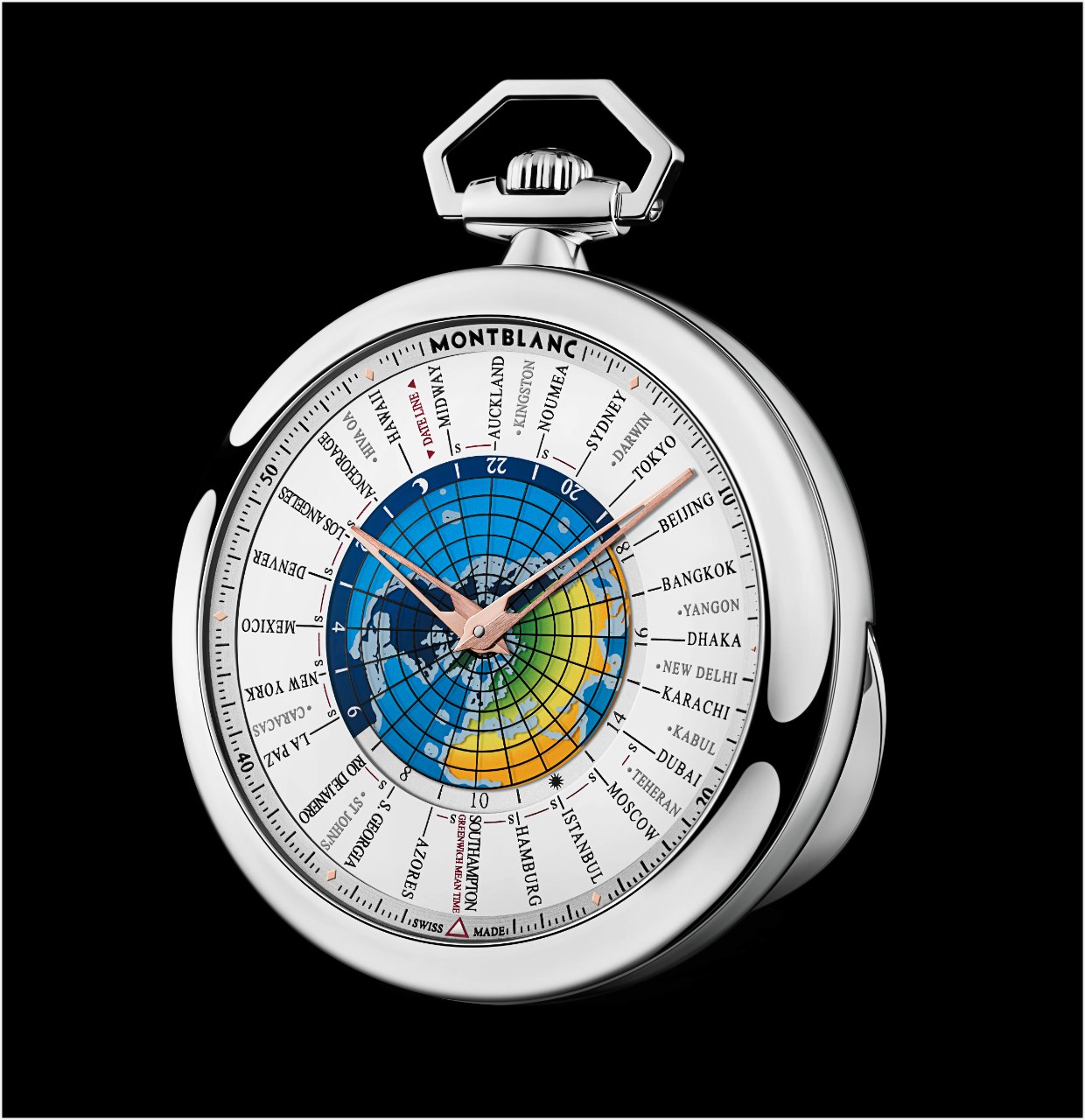 Montlbanc released a series of watches to celebrate the 110th birthday of the brand.
Among them, two new Orbis Terrarum, a 43 mm wristwatch with a colorful dial, and this pocket watch.
You will notice that the city ring is not organized the same way than on the wristwatch: 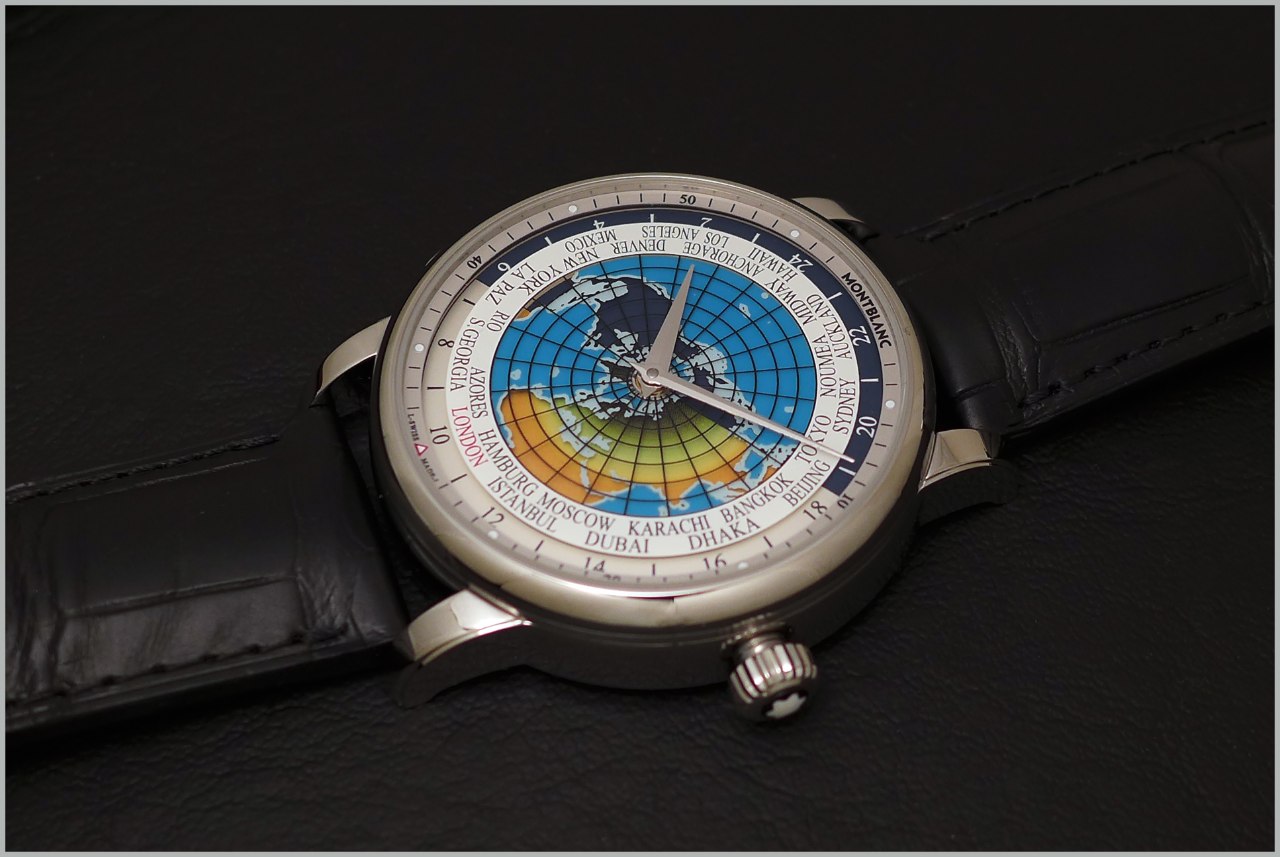 A pocket watch with some generous dimensions, to say the least: 53 mm big, 16, 80 high.
When it can be problematic for a wrist watch to be that big and thick, it is not an issue for a pocket watch... A pocket watch which can also be a desk clock due to a lever located on the backside: 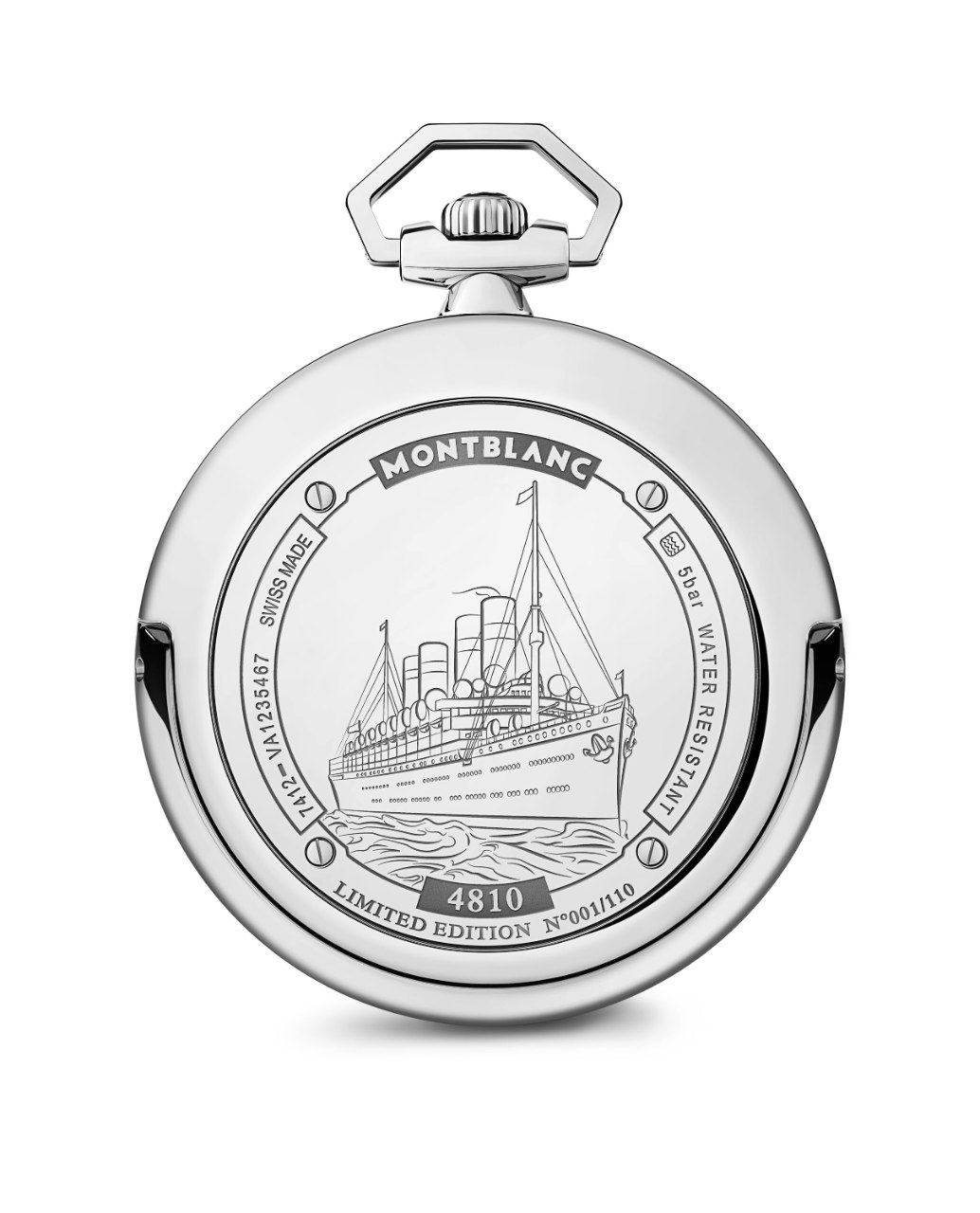 My first thought was to regret the absence of a hunter case back, but on a second thought, I felt it was not that important, because, like in the wristwatch version, the movement housed is a Sellita with a modular world time, the Cal MB 29.20, an automatic movement beating at 28800 vibrations per hour, with a 42 hours power reserve. Nothing exceptional, but accurate and reliable.
Here are the two pictures I took during my trip in Hamburg: 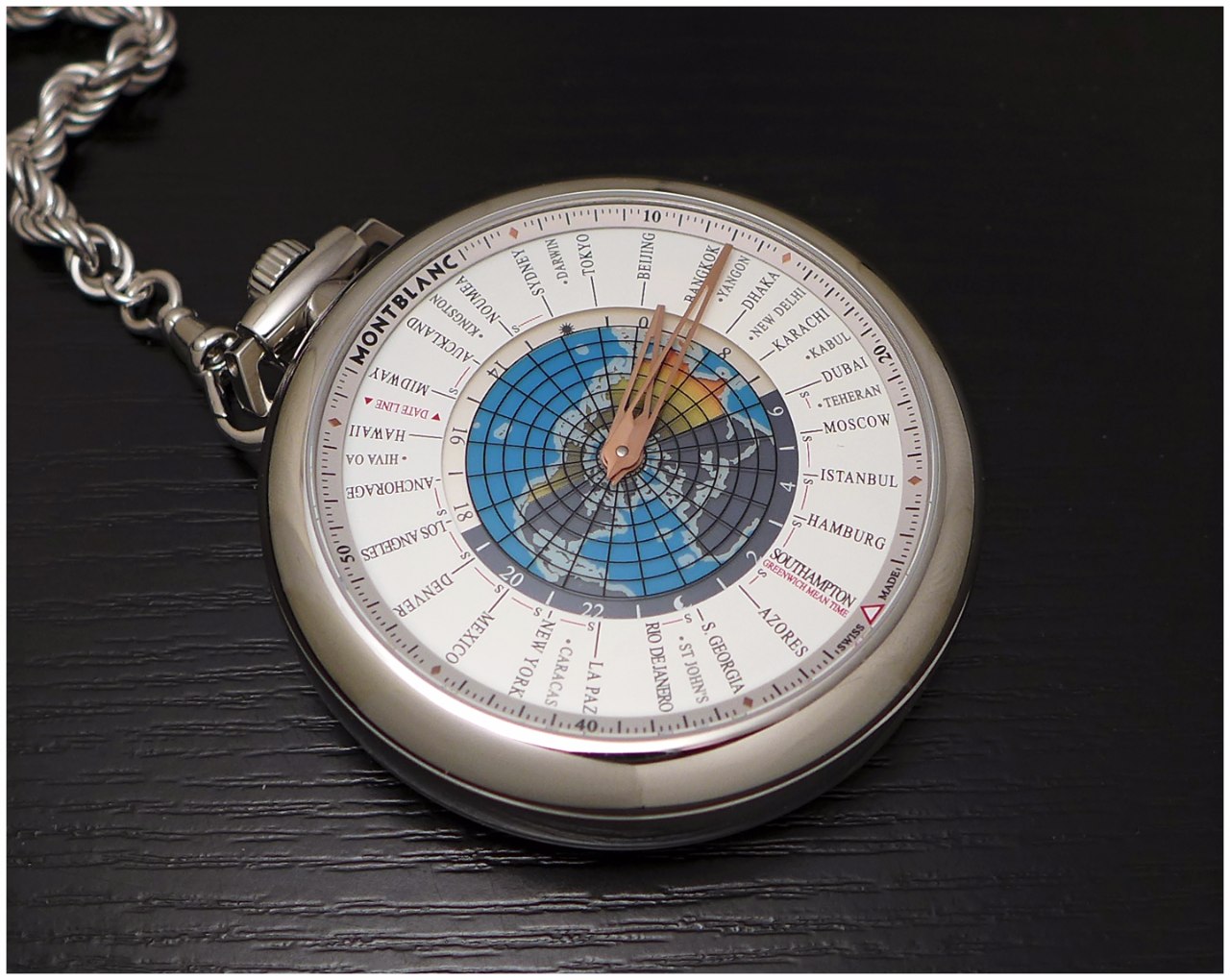 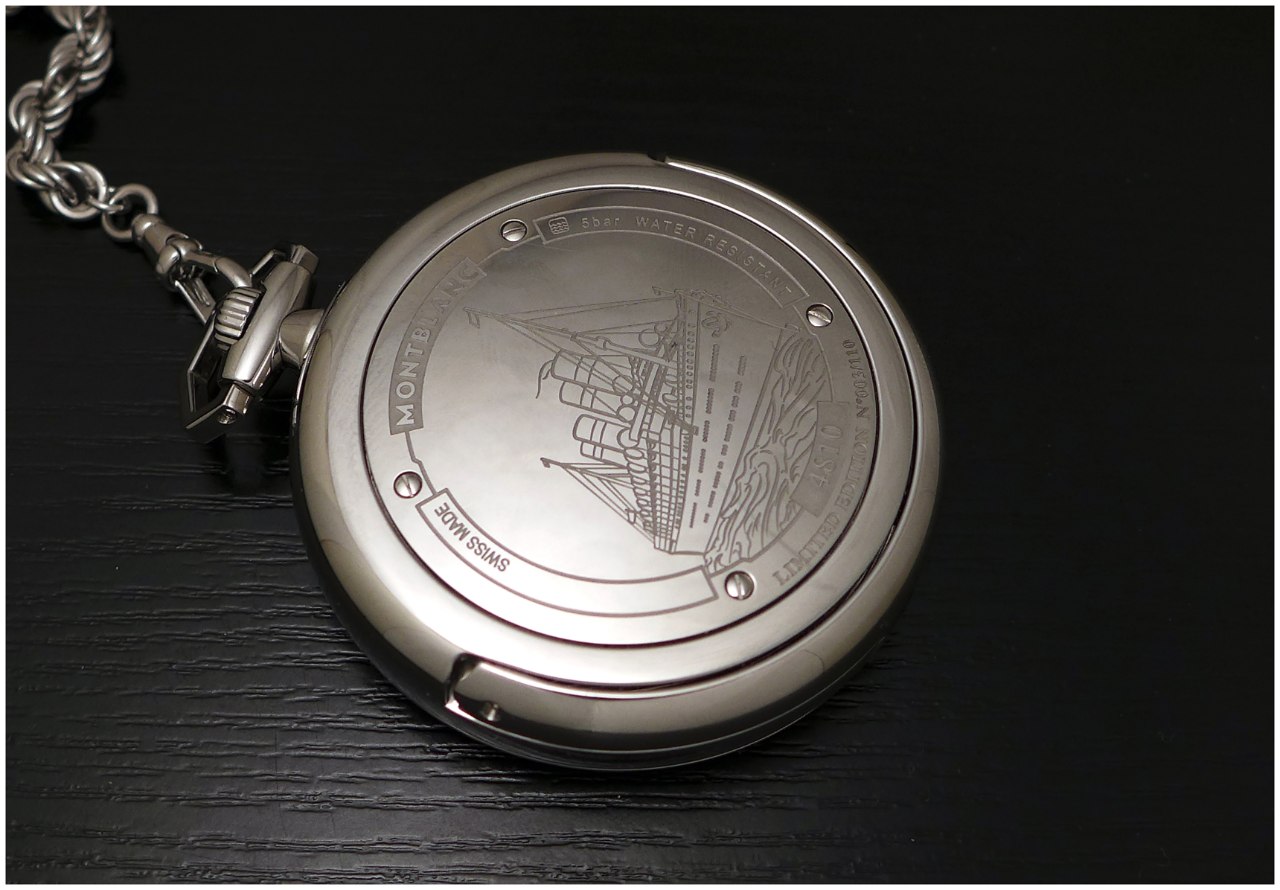 I quite like this pocket watch. I find it brings some additional romantisme to a complication which is already, by nature, romantic.
If you travel in a cruiser... Or if you want a nice object on your desk...
Smart.
Best,
Nicolas

By: amanico : March 30th, 2016-14:22
Montlbanc released a series of watches to celebrate the 110th birthday of the brand. Among them, two new Orbis Terrarum, a 43 mm wristwatch with a colorful dial, and this pocket watch. You will notice that the city ring is not organized the same way than ...
login to reply

By: KMII : March 30th, 2016-17:12
The different format allows for quite some nice details, such as at least indicating the half hour time zones, replacing Paris & London with Hamburg and Southampton, etc. I\'m confident they should be able to sell the 110 pieces, even if pocket watches ar...
login to reply

Another dimension, K. Which is good for a World Time, I think. Thanks for your feedback. [nt]

If I want a pocket watch as an accessory and companion

By: jrwong23 : March 30th, 2016-17:43
This will be the one! Vintage ones are charming but I am afraid of servicing. This one is great for travels and also for work as it can be a desk clock Thanks for the lovely shots Nico. I have not seen any novelties from Montblanc yet and I look forward t...
login to reply

It can be quite dandiesque to travel with such a watch in the pocket. I quite like this idea. ;)

By: amanico : March 30th, 2016-22:38
As for MB novelties, I am confident you will soon see them in the flesh, the other pocket watch, the tourbillon cylindrique, will certainly get all your attention. Best, my dear Robin. Nicolas
login to reply

that case is splendid in looking

By: leighapfraise : March 31st, 2016-01:12
the design in that pocket watch is very amazing. what's the inspiration in manufacturing that watch. i ma curious
login to reply

Travels, cruisers, 1906, which is the foundation year of Montblanc, if I got it well. [nt]

By: penfriend : November 28th, 2019-05:55
So this one is serving us as a desk top clock - a very handsome piece of art and I look at it very often. Due to its weight you can also use it for self-defense when locked to its chain ;-) ...
login to reply

It was a real beast in terms of dimensions.