When you think " Jaeger Lecoultre ", which is the first watch which comes to your mind?

A long time ago, in the early 2000's, I read a well written article saying that for some brands, there were some cannibal watches: For example, Audemars Piguet is cannibalized by the Royal Oak, Blancpain by the Fifty Fathoms, Omega by the Speedmaster... And when it comes to Jaeger Lecoultre, by the Reverso.

On this matter, I agree and disagree. Ok, if you are talking to somebody who is not passionate about watches he may give you this kind of answers. Ok, some brands play a tricky game, and if they are cannibalized by some of their watches, it may be because they want to do so. See Omega, for example. Each year they launch an endless series of Speedies, in LE or not. Go to their Museum, you will see all the place the Speedmaster takes!
Back to Jaeger Lecoultre, in this article it was said that the Reverso was so important that it supplanted the name of the brand in people's mind, thinking that the Reverso is a brand apart of Jaeger Lecoultre.
It is true that the Reverso is very important for Jaeger Lecoultre, but at the point to supplant the name of the brand? Certainly not!
It is a fact that the Reverso was born in 1931, and that, in these 90 last years, we saw many of them, some being very important for both the Grande Maison and the watch lovers. See, for instance, the rose gold series in the 90's, the very early Reversos with their colored dials, the Tributes, the Anniversary pieces and this year, the Quadriptyque... They all are masterpieces, at their own level.
A Blue one from circa 1935: 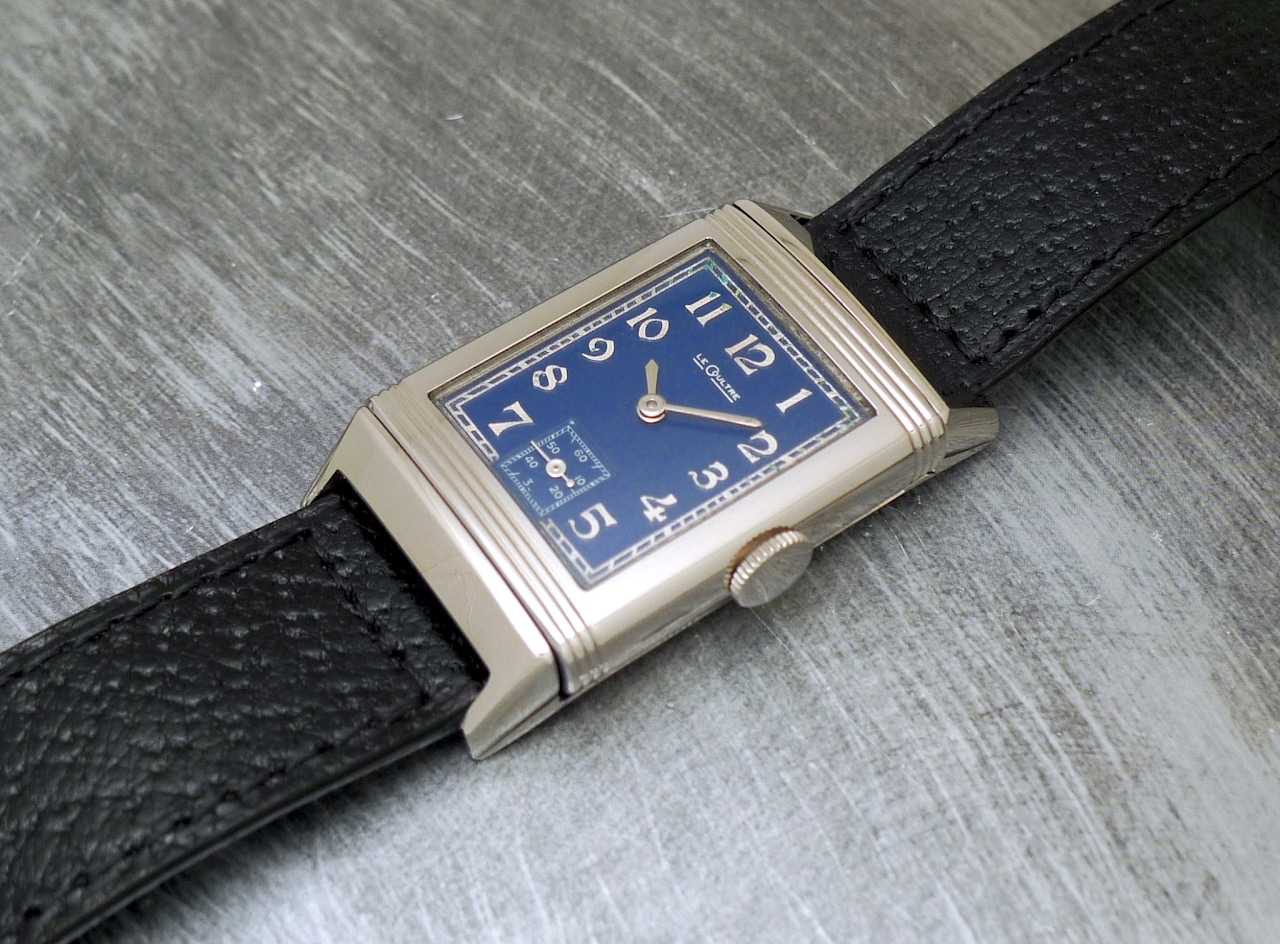 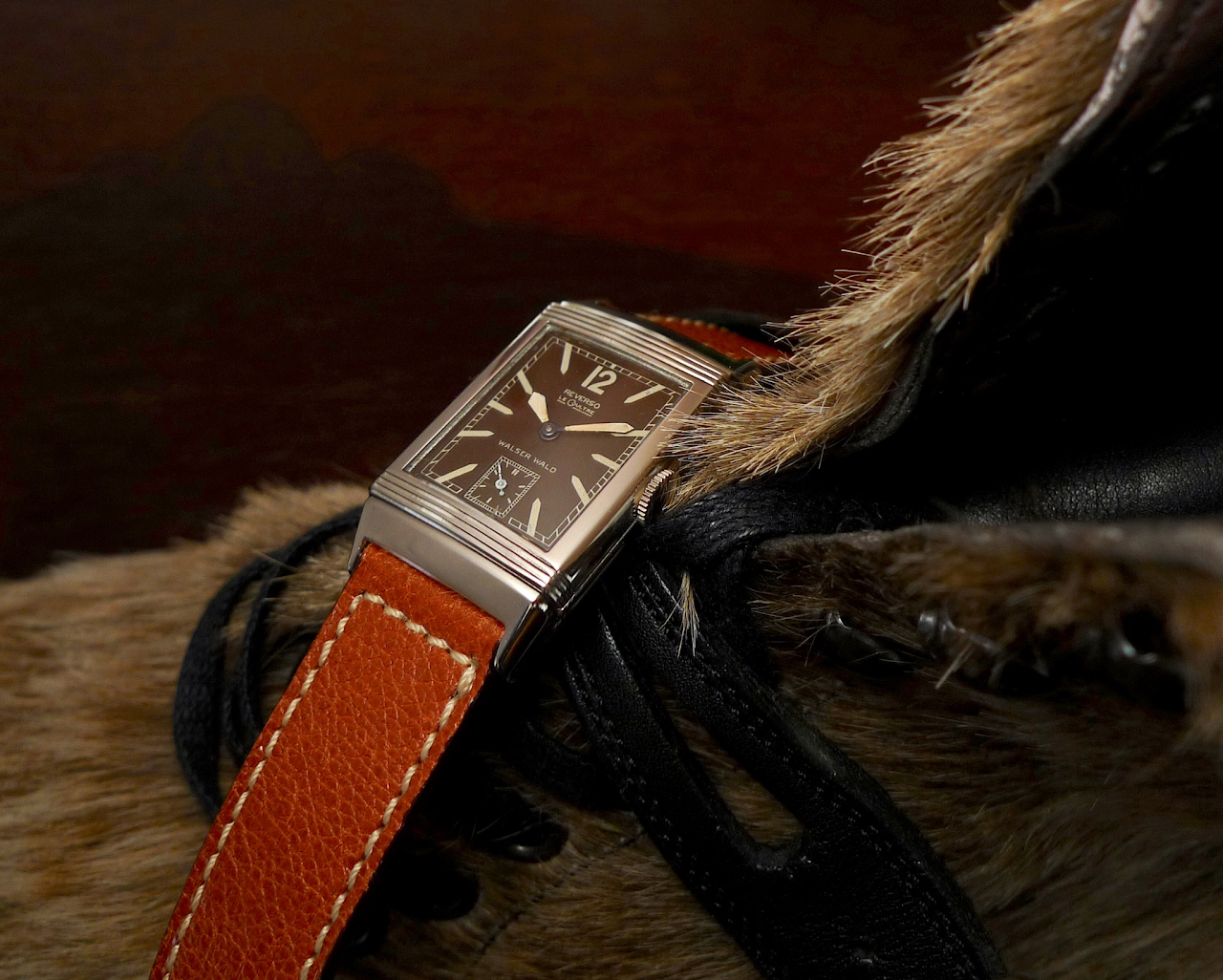 BUT... There is a big BUT...
La Grande Maison existed way before the Reverso, since... 1833. Since then, Lecoultre, then Jaeger Lecoultre produced an incredible variety of pocket watches, desk watches, wrist watches and even clocks, some of them being very important.
The Atmos line, for example, is an icon. So is the Memovox, since 1950, and in a more recent times, the amazing variety of high end watches, such as the Minute Repeaters, the Gyrotourbillons, and let's not forget the Duometre line which is, for me, tomorrow's icon, and a great classic, already.
The first Memovox, ref 3150: 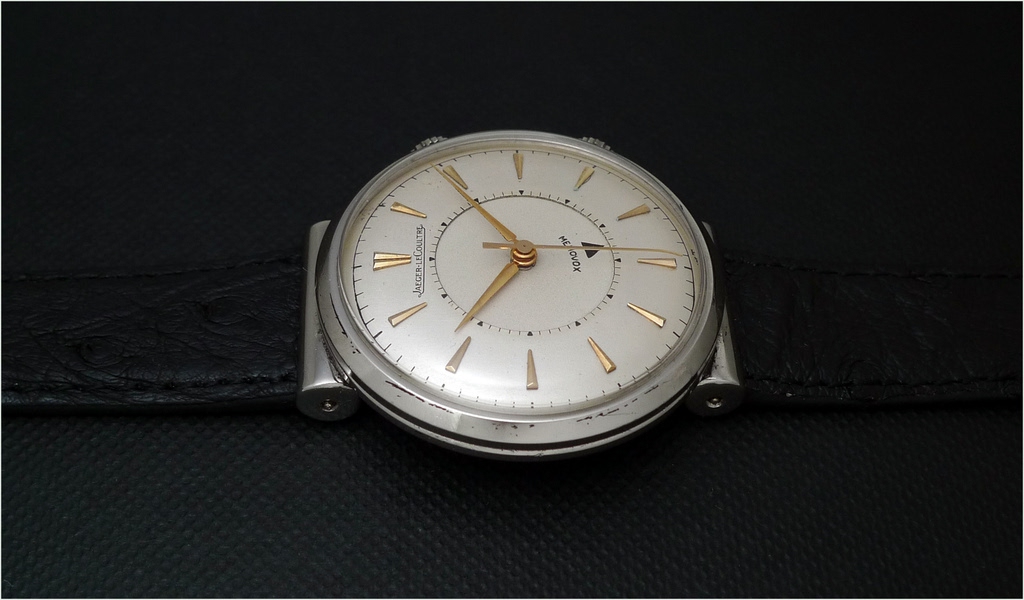 So, I come back to my question: Which is the first watch  which comes to your mind, when you think Jaeger Lecoultre?
Personally, I could not mention just one, as it would be too reductive to what is Jaeger Lecoultre, and not only one watch, but a line.
So may answer is : Geophysic, Memovox, Duometre, Minute Repeater ( because JLC is very innovative when it comes to this complication ) and Reverso.
The legend, the Geophysic: 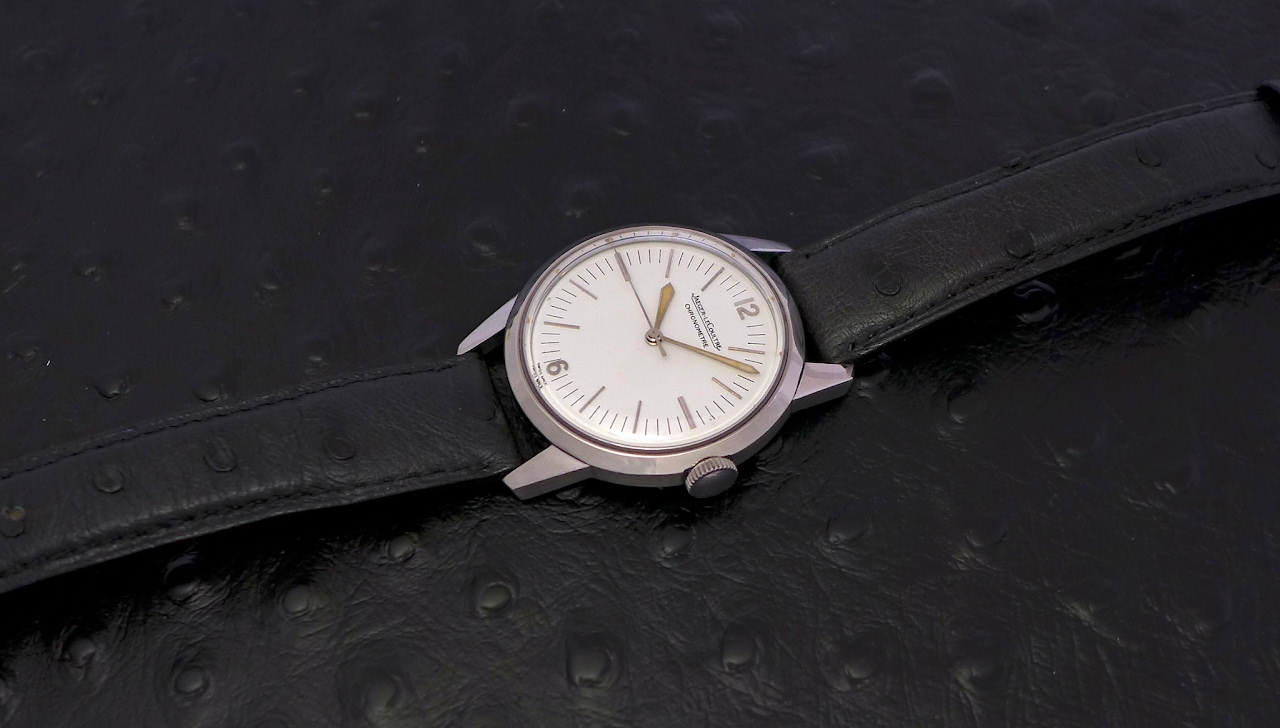 Master Minute Repeater, launched in 2005. Here the Titanium version, from 2006: 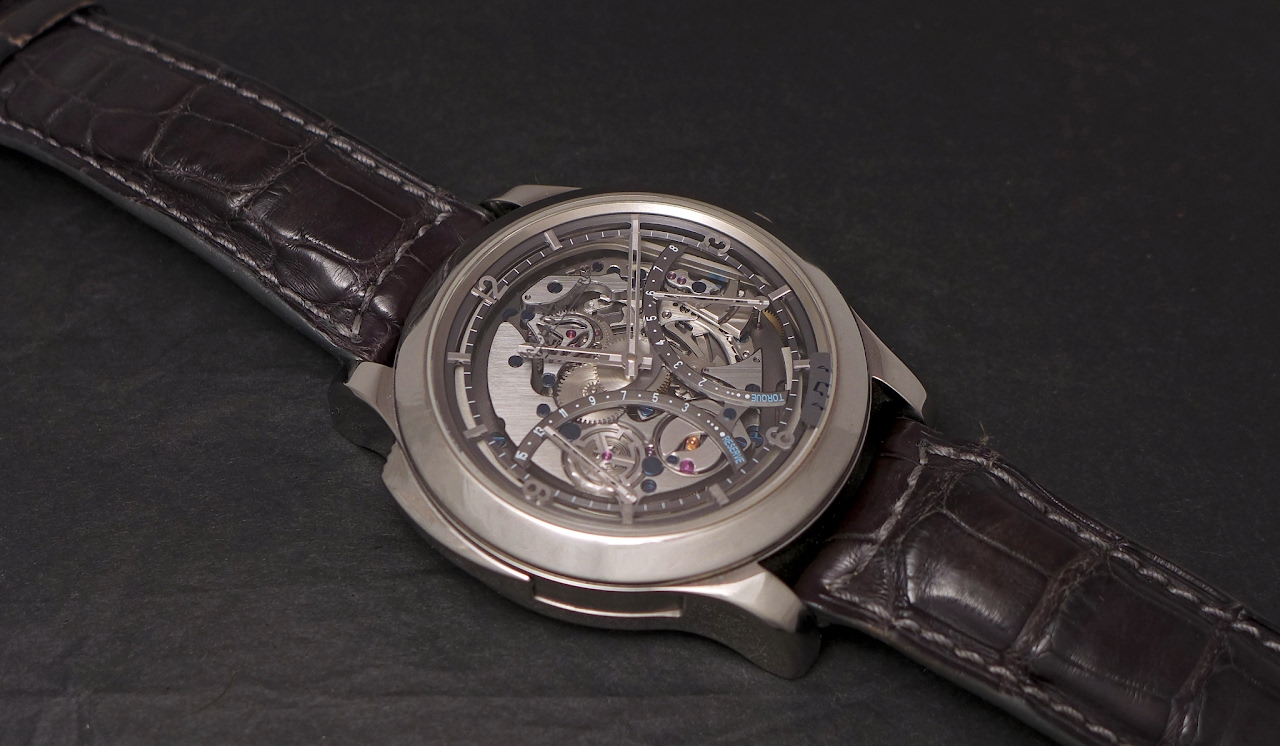 The Duometre à Chronographe, since 2007 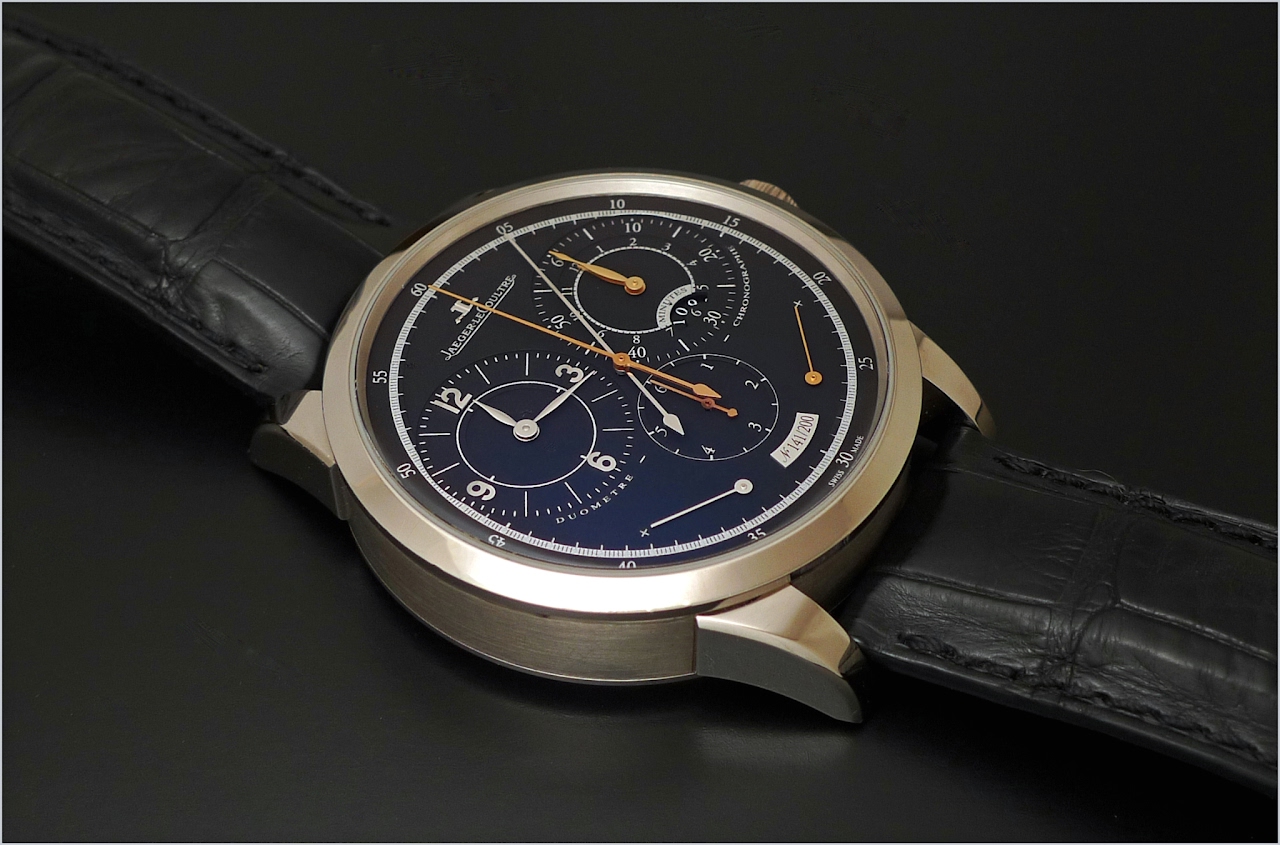 The Master Gyrotourbillon One, born in 2004: 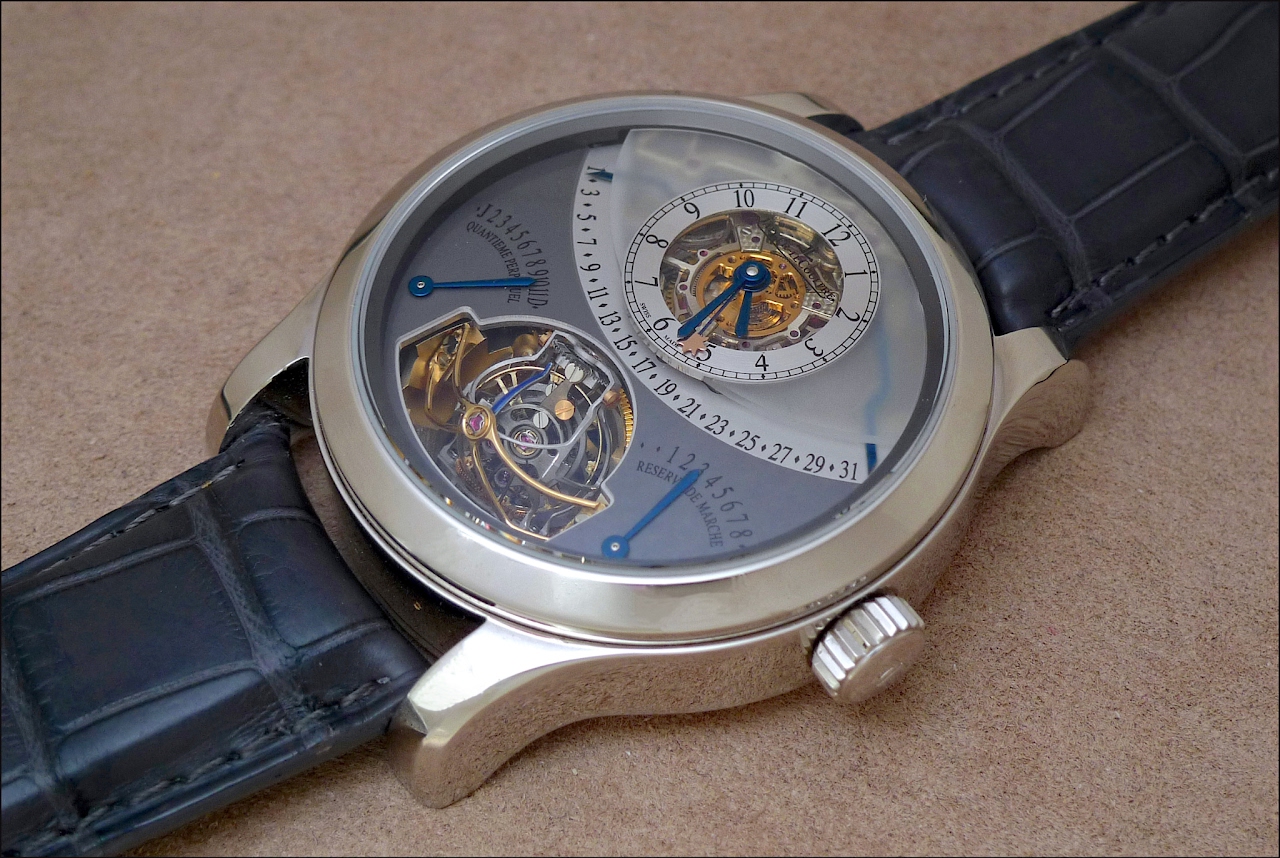 You? What kind of Jaeger Lecoultre man or woman are you?
Looking forward to reading your comments and thoughts.
Best,
Nicolas

When you think " Jaeger Lecoultre ", which is the first watch which comes to your mind?

By: amanico : October 2nd, 2021-08:44
A long time ago, in the early 2000's, I read a well written article saying that for some brands, there were some cannibal watches: For example, Audemars Piguet is cannibalized by the Royal Oak, Blancpain by the Fifty Fathoms, Omega by the Speedmaster... A...
login to reply

You summarize it perfectly my friend

The master word when it comes to Jaeger Lecoultre is Diversity, indeed.

between what you posted? Reverso

For me, there’s no doubt that when I think of JLC it’s Reverso that springs to mind.

By: kev09 : October 2nd, 2021-09:47
When I became interested in watches many years ago my grail was a Rolex Explorer and I eventually got one. By then I had discovered Reversos and one of that line became my new grail. I now have two and wish I had more. Although I’m now very familiar with ...
login to reply

I understand, my friend. One in particular?

When I think of JLC

By: Cookies : October 2nd, 2021-09:54
I think of the slogan “watchmaker of watchmakers”. For example, the IWC Mark 12 used the calibre 899, and countless Royal Oaks have used their movements. Anything creative, slightly above mid-tier comes to mind. Something groundbreaking, ground-up comes t...
login to reply

I love their " intellectual " watches, and for sure the Geophysic True Second is a perfect example. The EL II, too.

Well, the London Boutique Edition is super challenging to get and the asked prices are crazy. This Master Chrono Calendar is a classic!

When I think of Jaeger Lecoultre..

By: proestak : October 2nd, 2021-11:07
which btw happens many times every day, my mind goes to innovative watches like EL1 and EL2, the Duometre line, all the Gyrotourbillions and of course the memovox watches.
login to reply

I am not far from your thoughts.

No place for other JLCs?

By: Stoikos : October 2nd, 2021-13:06
I agree that, while Reverso is rightly a classic and a flagship model that JLC should and must cherish, for the reasons you and everyone are mentioning, it is not cannibalized by it the way AP, an exceptional historical brand, has unfortunately been by th...
login to reply

Thanks for your feedback and for sharing your thoughts, Stoikos.

You said it all for me, my friend..

By: hs111 : October 2nd, 2021-16:04
Memovox, Geophysic, Reverso, Duometre, Gyrotourbillon I, & of course MMR’s and the Atmos concept. - If I need to pick just ONE, then maybe the Memovox series, as a whole, for Humble Me..t Best and thx for this food for thoughts.. Best, hs
login to reply

The Memovox is so JLC! Good choice, mon ami.

For me, the JLC is best associated with Reverso and memovox.

By: hoseachandra : October 2nd, 2021-16:06
The higher complications are, of course, also associated with JLC, but only for real WIS or very seasoned collectors. Most of my friends who are into watches but not really deep, only know Reverso and memovox.
login to reply

When someone says JLC to me, I think of 20th Century French Art, Cinema, Culture, Automobiles, Design, Style

Which is reflected by their horological production. +1, Salman.

By: jml_watches : October 2nd, 2021-21:00
Hi I'd go for Memovox, Reverso, Futurematic ( even though it's unusual & rare, it shows their innovation). But also the more recent series Master Control. Cheers JML
login to reply

Indeed, my friend. It is way too reductive.

While it is true, I think of Reverso first, the Reverso is not a big seller for JLC...

By: patrick_y : October 2nd, 2021-21:30
Everyone always assumes that the JLC Reverso is a big seller. It isn't. Round watches outsell square ones even at JLC by a considerable margin. Furthermore, most of the super complicated JLC watches are almost always in round cases. And when I think of JL...
login to reply

I am on the same boat than you. Complications are in the DNA of JLC.

By: patrick_y : October 3rd, 2021-16:50
What company produces unusual minute repeaters with even more gongs than Audemars Piguet? What company pioneered a multi-axis Tourbillon? A spherical tourbillon that actually works, when Breguet is technically considered the King of Tourbillons? JLC reall...
login to reply

You are right, there is a rich talent, or better said, a lot of rich talents in this Manufacture, reflecting a huge diversity, with a long history. No many brands can claim the same.

So many rich talents. But just not appreciated because it doesn't say "Patek Philippe" or "Audemars Piguet" on the dial.

We are on the same line, mon ami. I can only agree.

You're most welcome! Thank you for reading!

Thank you Holdemchamp! You know me, just trying to put everything in perspective.

I cannot say I think of a first or only one watch when I think of JLC mon ami. I can say that I think of several which include a Reverso, a Gyrotourbillon, and a Duometre of some kind.

By: holdemchamp1225 : October 3rd, 2021-15:28
By the way, missed you in Paris yesterday. I gave your badass strap for your MMR to Mike so you can get it from him earlier than seeing me again which I hope will be soon 😜
login to reply

Yes, too bad for yesterday. But you probably had lunch with an ogre. :))))

LOL yes. Mahesh and I had a great lunch after some VIP treatment at the VC boutique. I might get that VC Overseas Perpetual Skeleton sooner than later depending on what the brand manager thinks of my worthiness 😉😜👍

By: Mr.Gatsby : October 4th, 2021-21:18
I think there are certainly some watches in the entire lineup of JLC that has gotten iconic over the course of history, and that you’ve rightly pointed out, the Reverso, Memovox and I would stretch it a bit further to include the niche Deep Sea Alarm, whi...
login to reply

I am very impatient to see JLC's Future, too. Thanks for your interesting feedback, mon ami.

By: Mr.Gatsby : October 4th, 2021-21:34
With JLC. Some of the old names like Milan, Guillermo and Yves are also part of those memories. Through your contribution over the years here I’ve picked up quite a few pieces…and they are the ones that continue to hold significant value in the collection...
login to reply

I couldn't say it better about watches and sentiments. That's the same for me. Oh yes, we had great times, and we'll have others, for sure.

One icon not mentioned is their Ultra Thin

By: roundel : October 4th, 2021-21:55
The dauphine hands and dagger indices seem the epitome of JLC dna to me. I was recently discussing watches with two far more sane watch fans than myself. When I showed them the Amvox II on my wrist, they showed no recognition of the brand. It reminded me ...
login to reply

That may also question the fact that your friends are so much watch fans... How can't you give some recognition to one of the most original and interesting modern Chronographs??? ;)

For me, it’s Reverso, but then eclipsed by the geophysic.

By: Handwound : October 6th, 2021-03:05
If I could have but one JLC, it would be an original geophysic. That’s thé éclipse. Will i ever have will, and fortune, and luck for that? I can’t say
login to reply

I can easily understand that... I cross my fingers for you.

Ahh I thought you had more, but one is enough, if that’s possible ;)

The idea to get a second one has crossed my mind, more than once. ;)

Oh, I have no doubt about that my friend!

Happy to read someone mentioning the Ultra Thin... Well deserved and how true. JLC knows how to make them.

For me the Memovox. It is an icon. But the Reverso is also an icon. Possibly more? I am biased.

I totally understand. I just realized that I have many Memovoxes!