I had been looking at this watch for a while ... but I had forgotten it a bit ...

But there was a post from Amanico that reminded me how much I liked it...

It just arrived with her box and papers, all in perfect conditions: 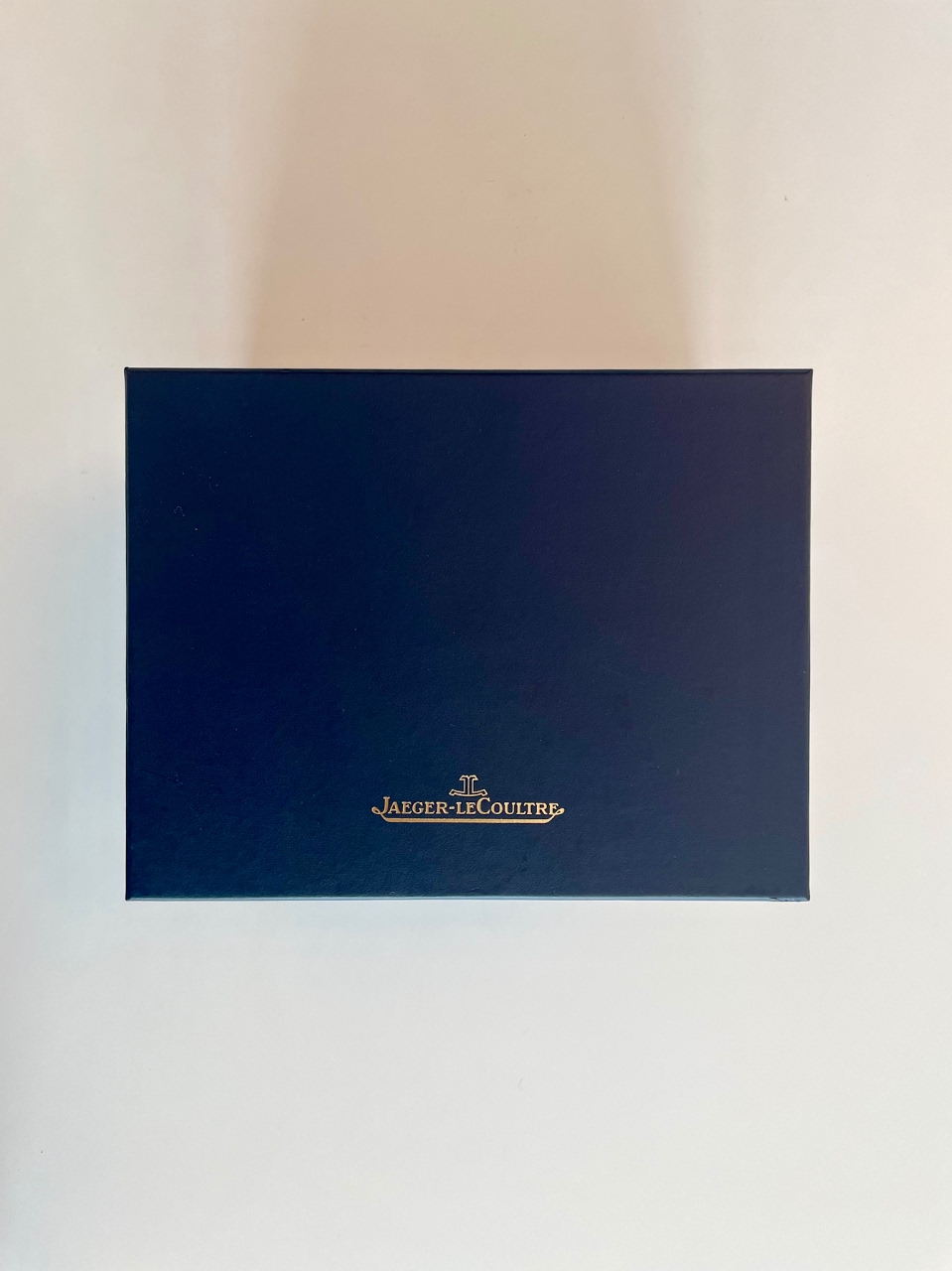 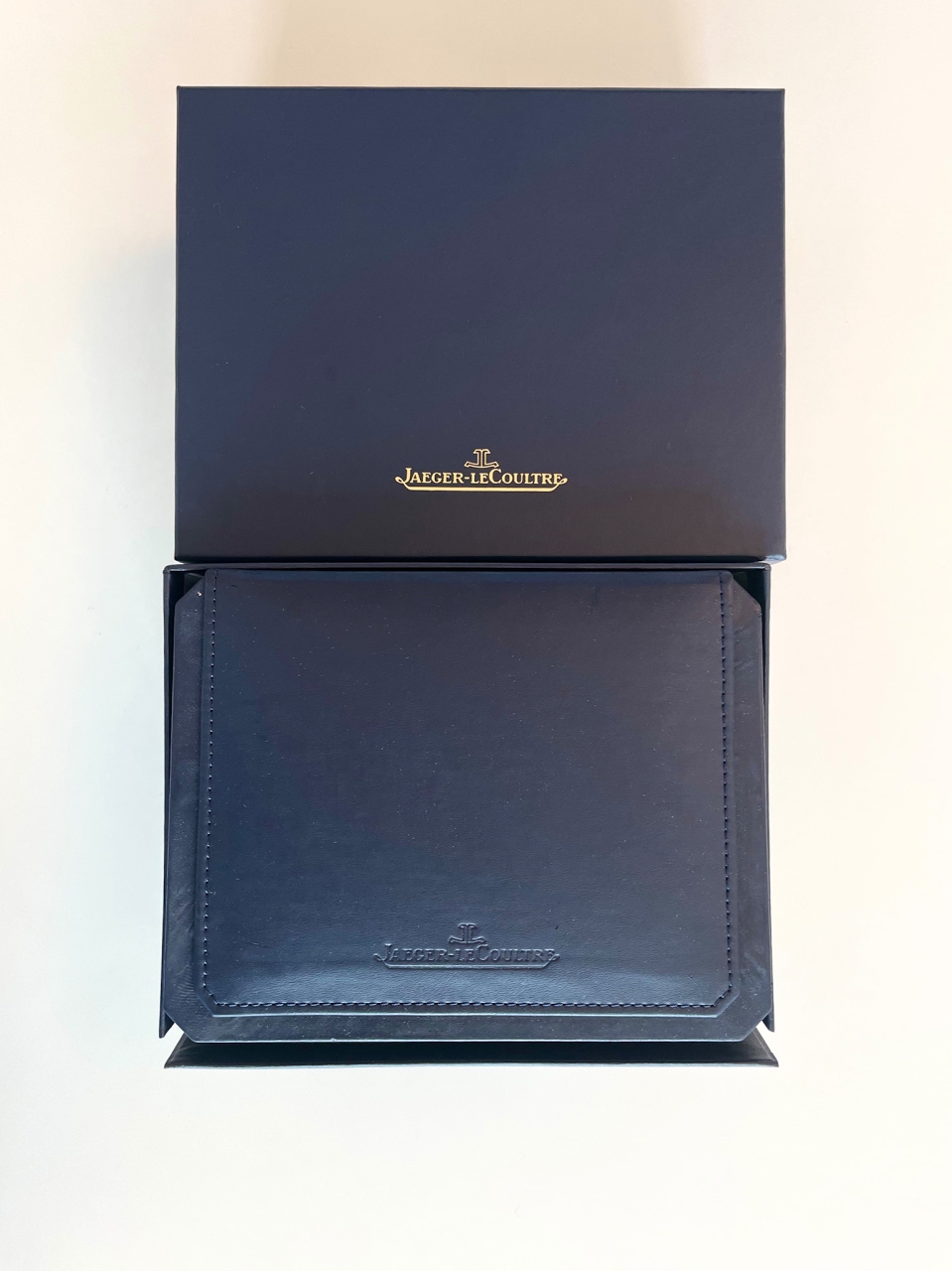 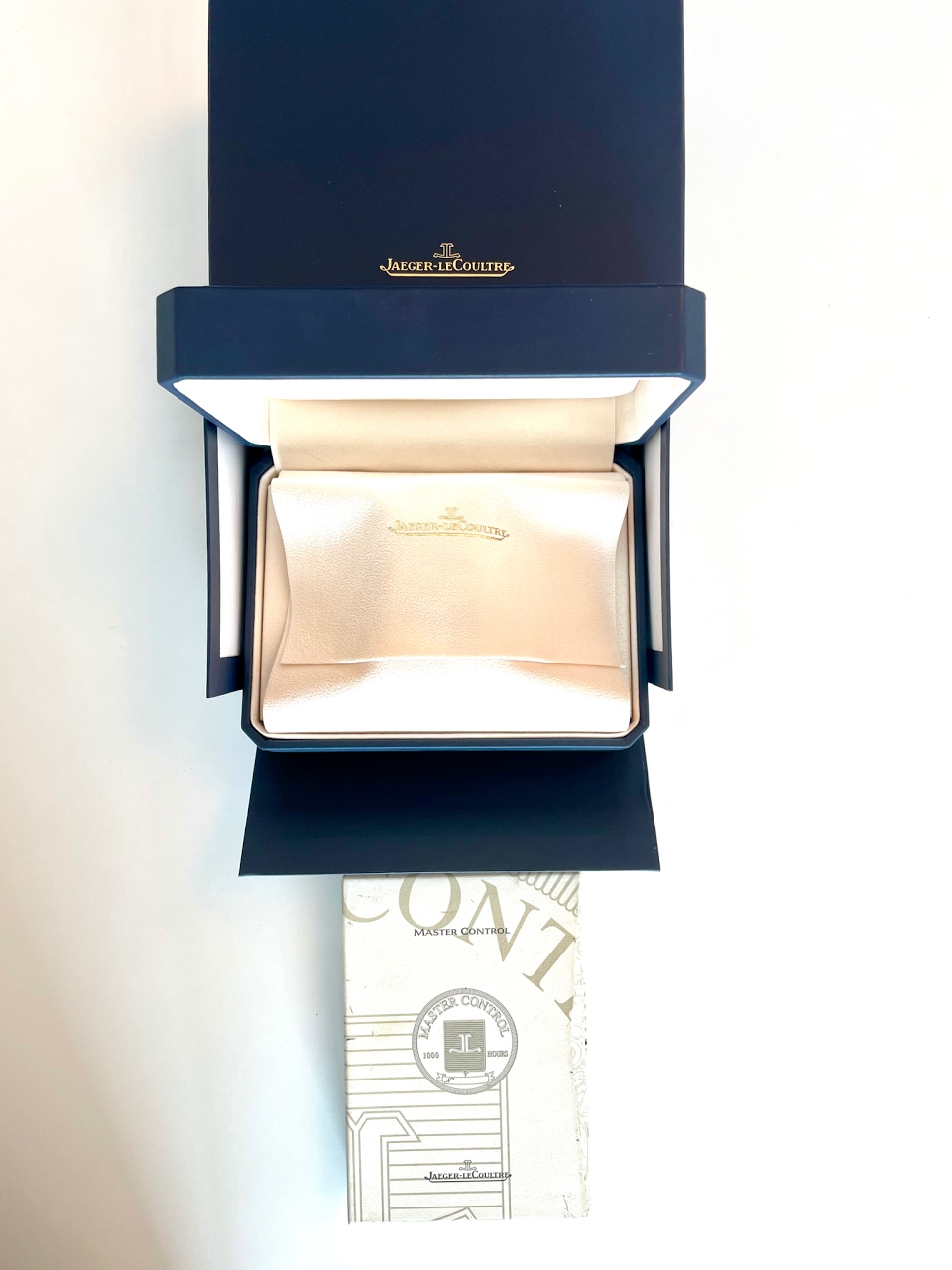 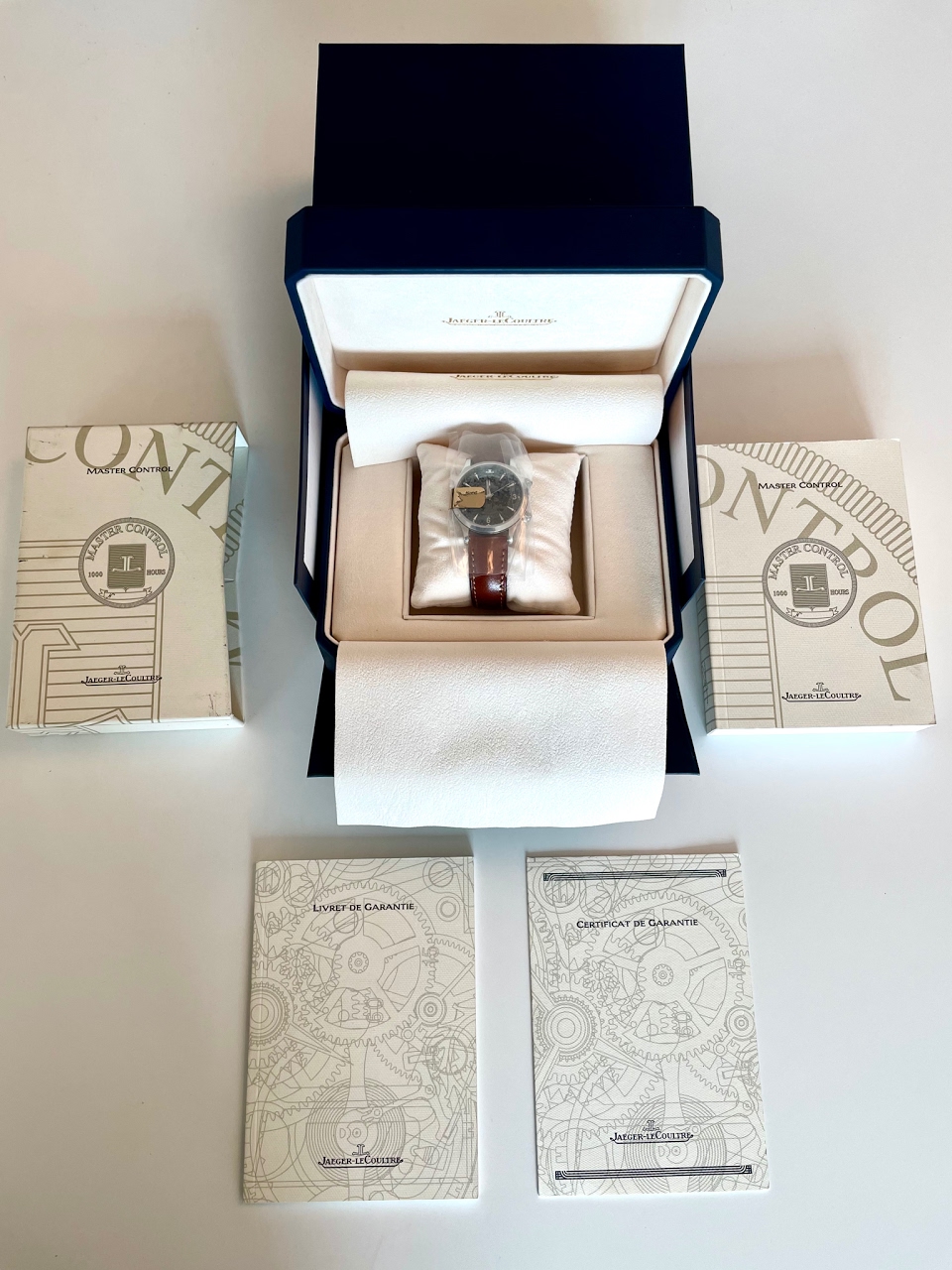 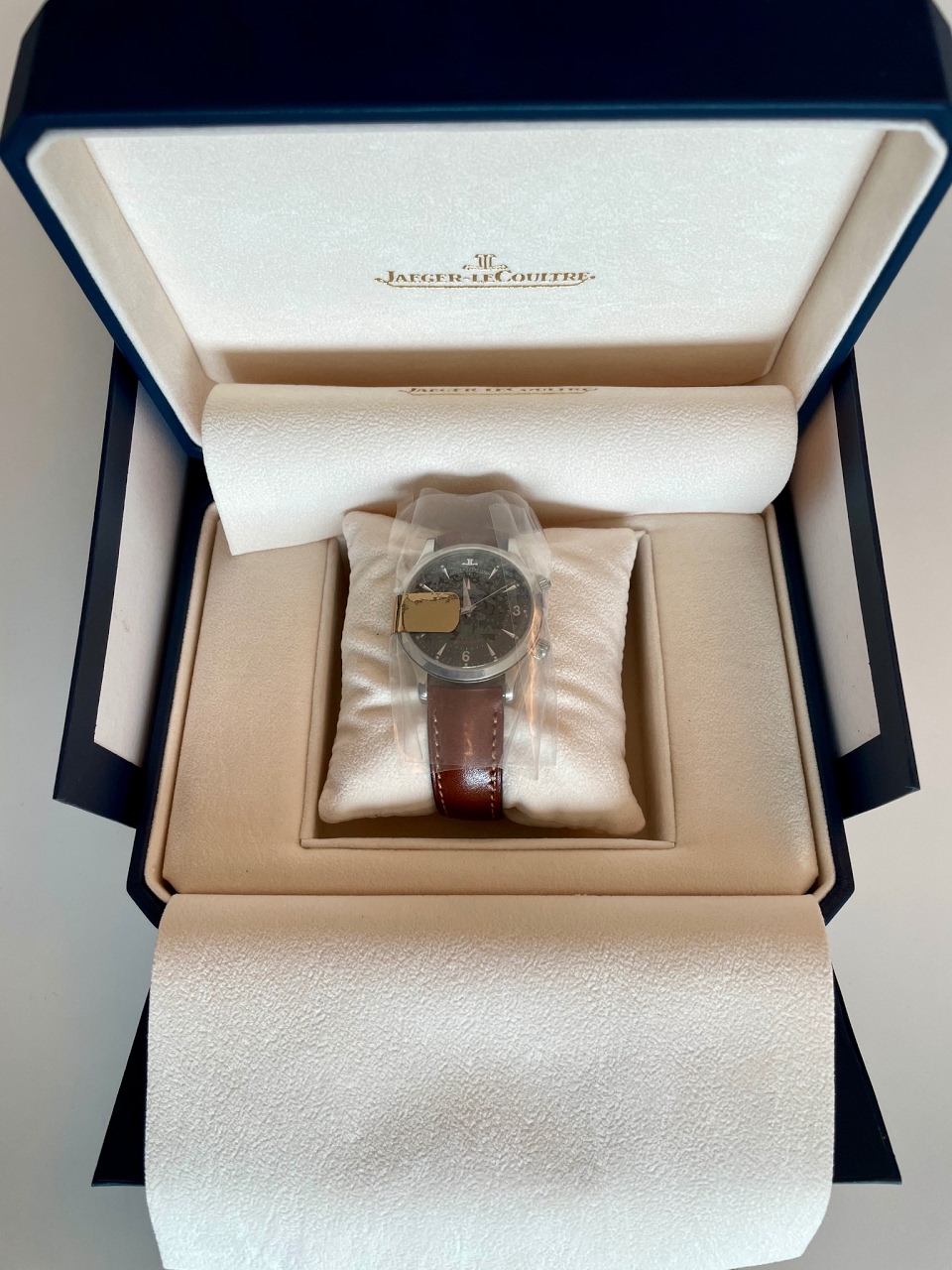 This Memovox model is not common because it is a black dial display modern Memovox and it had a limited run from around 1999-2002. This one is from 2001. A explained in Nicolas’ post there were only 1164 of these black dial steel versions with leather strap made and others with steel bracelet and some in gold... 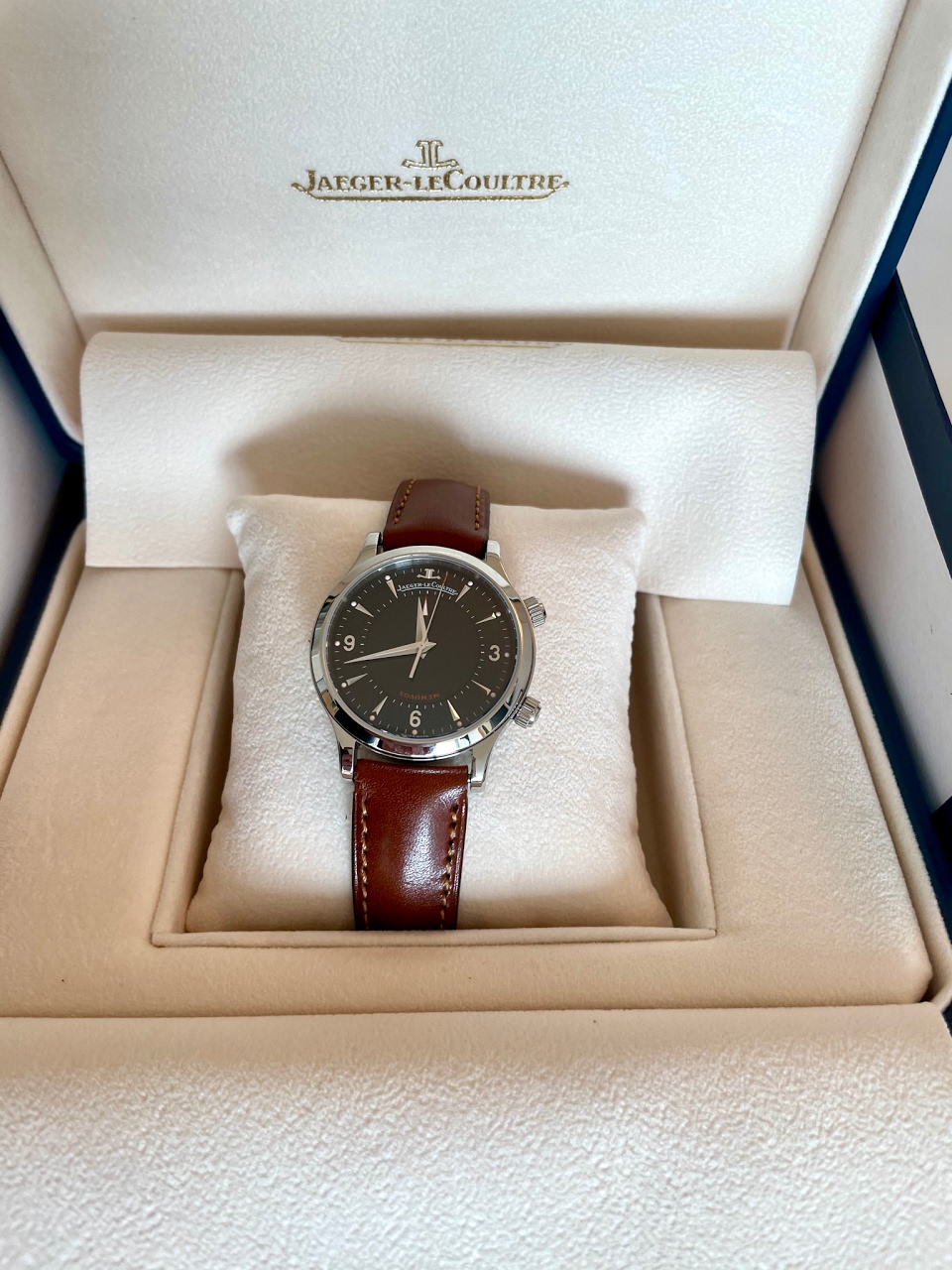 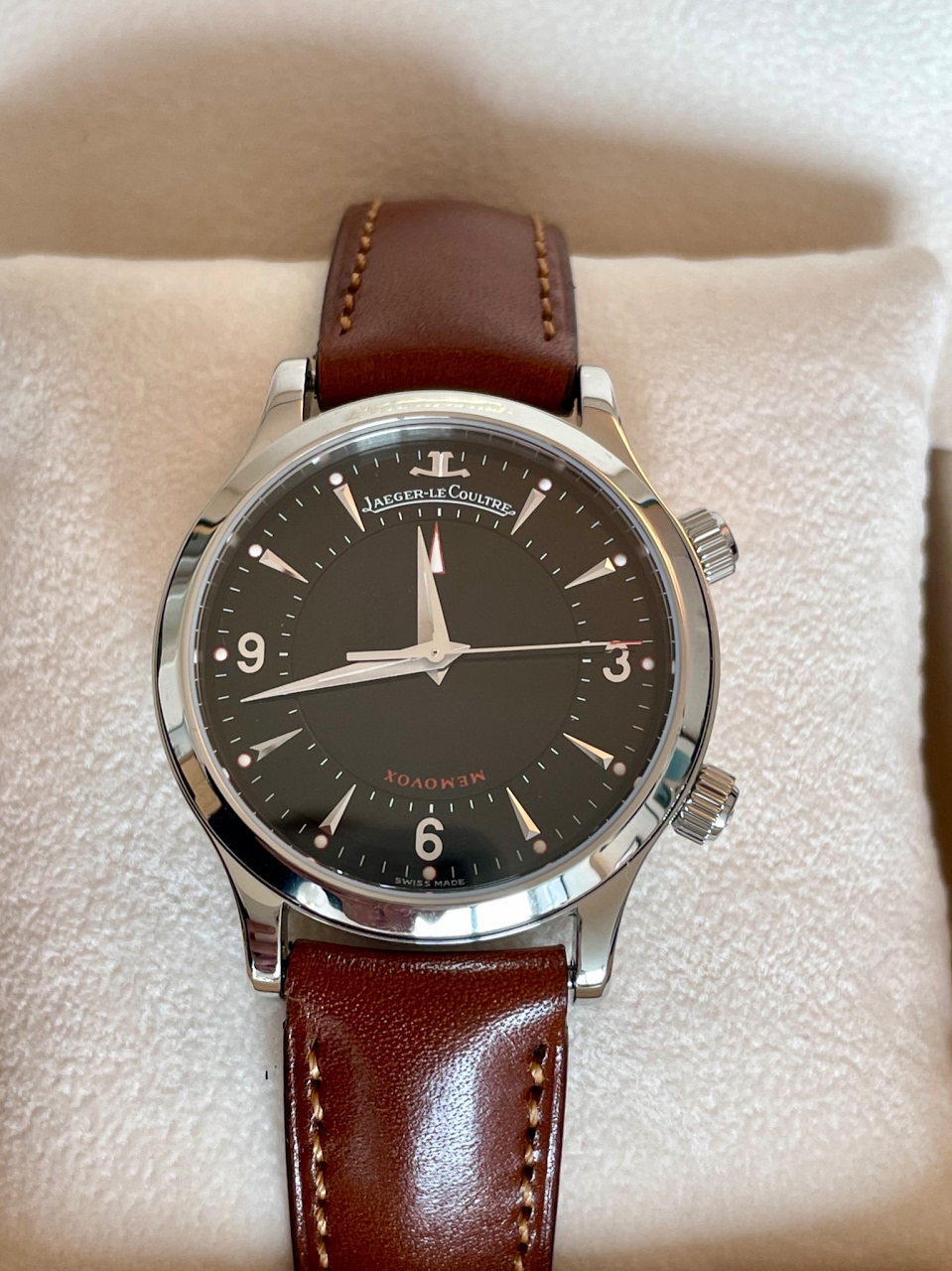 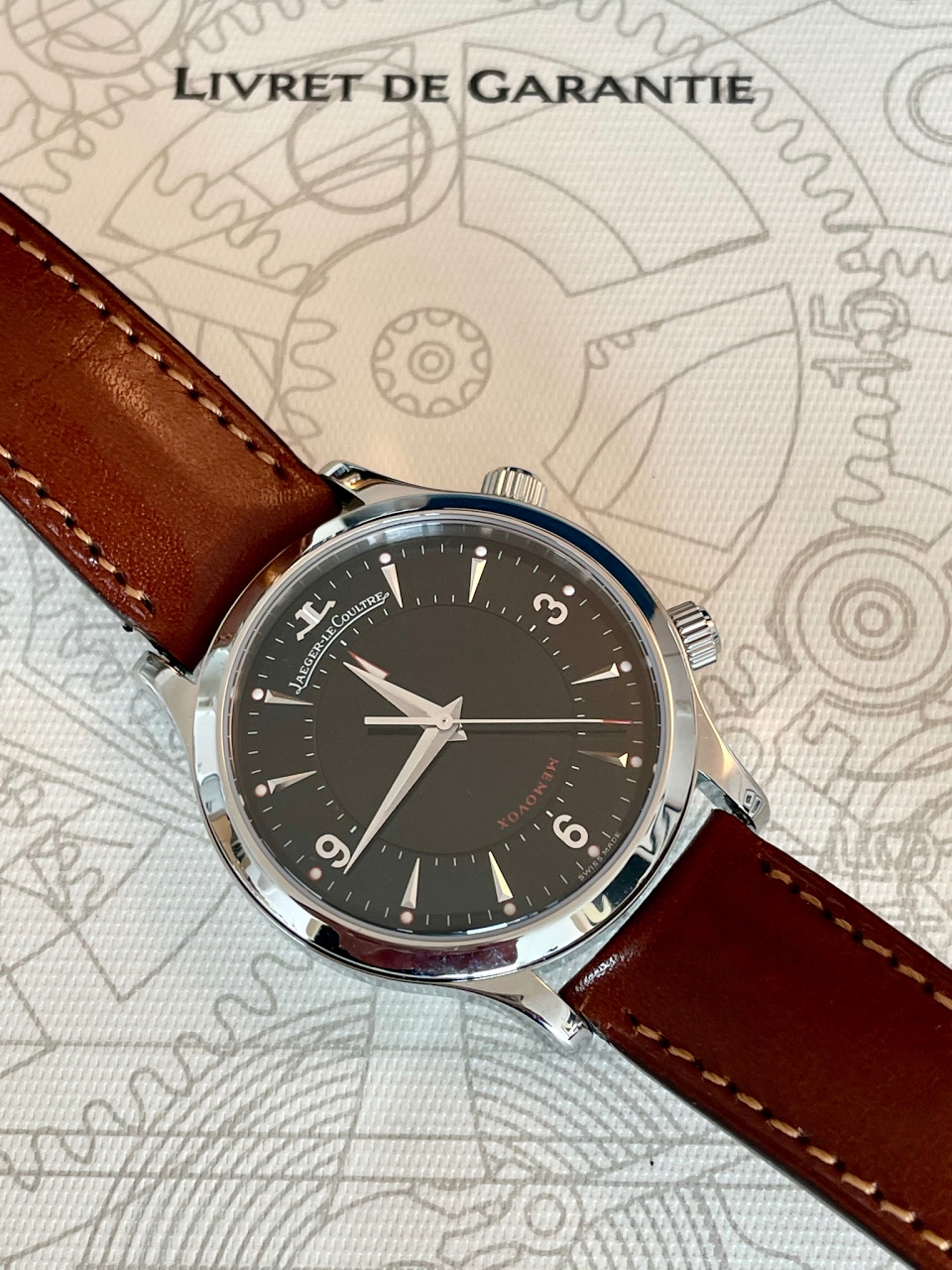 This Memovox is also unique because it's one of two modern black faced Memovox models and, until quite recently (2020 I guess), it was the only Memovox with a clear case back to view the movement and alarm complication. When this model was released there was also a silver faced version that had a closed case back, not as limited in production.

In 2020, Jaeger LeCoultre - which is the only watch manufacturer to have more than 200 calibers of striking watches in its watchmaking heritage - released an automatic silver dial version with a sapphire case back. But, even if the 2020 Memovox uses a gong design, it is much more difficult to view it in action.

In fact, previously as with this generation Memovox, the alarm mechanism used a gong and a resonator, which were attached to the case back for optimal sound transmission. That’s why therefore the vast majority of Memovox watches had a closed back. This is also why this Memovox, which included the manually wound caliber 914 with a sapphire crystal caseback, was an exception.

Another couple of interesting facts about this watch should be noticed : This watch not only does it differ from the buzzing alarm of the other calibres that had the hammer strike the inside of the Memovox case but it was also manufactured alongside the minute repeaters from Jaeger LeCoultre which have a similar gong design. For me, this manual wind version is a model to get because the gong makes the alarm sound immensely different and more pleasing to listen to than the vintage calibers : It really sounds like an old school bell…

A lot of these have had the back sapphire replaced but on this one this the original back sapphire as per the two contact points (A replacement will have one large cap on the crystal suspending the gong in place). 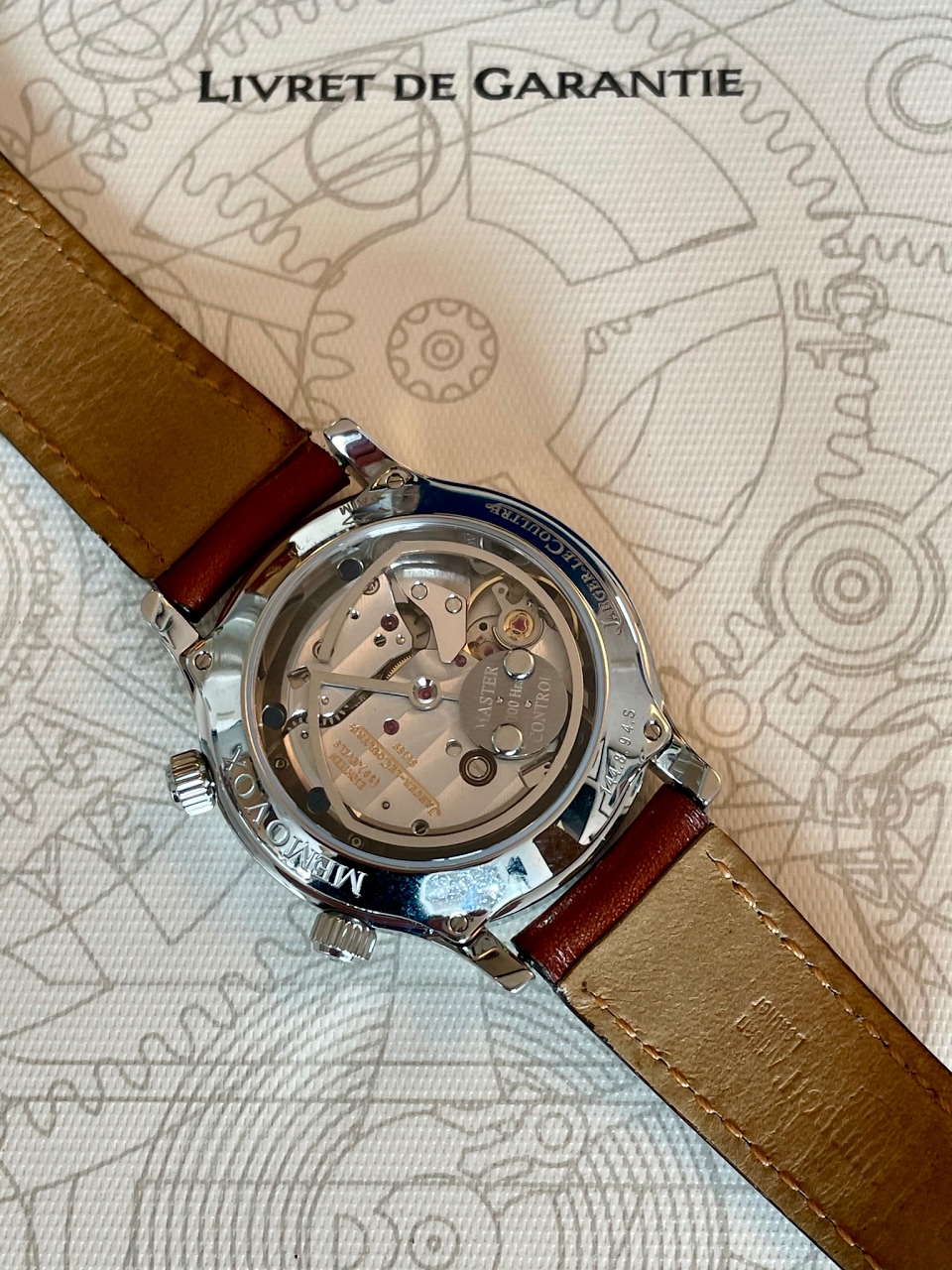 The movement looks fantastic : It is the Jaeger LeCoultre calibre 914 (also used in other models) which is an alarm movement from Jaeger-LeCoultre produced since 1996 and is based on its predecessors, calibres 910 and 911, but with significant improvements : It beats at a modern 28,800 A/h rather than 19,800 A/h as in the previous models and it was upgraded with 18 jewels, one more than before.

But the most significant improvement is the use of a nicer-sounding gong for the alarm function. 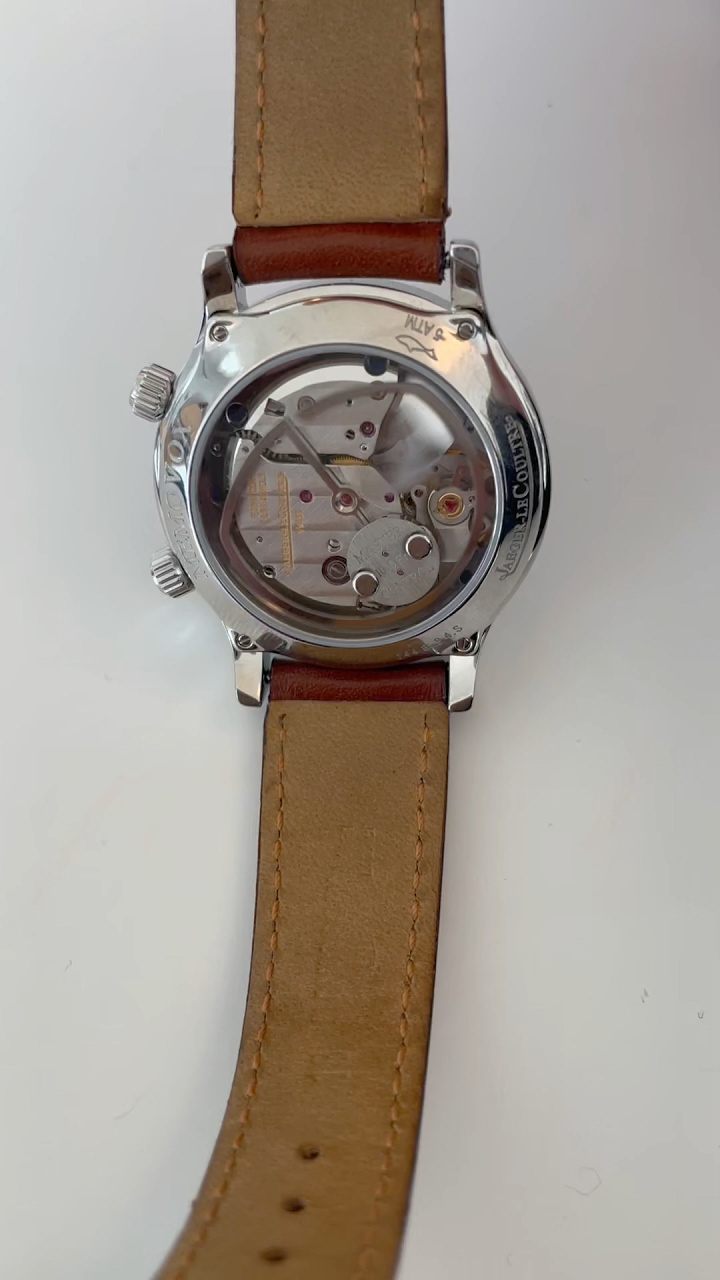 Thanks for reading me and have a nice day, mine is pretty cool : 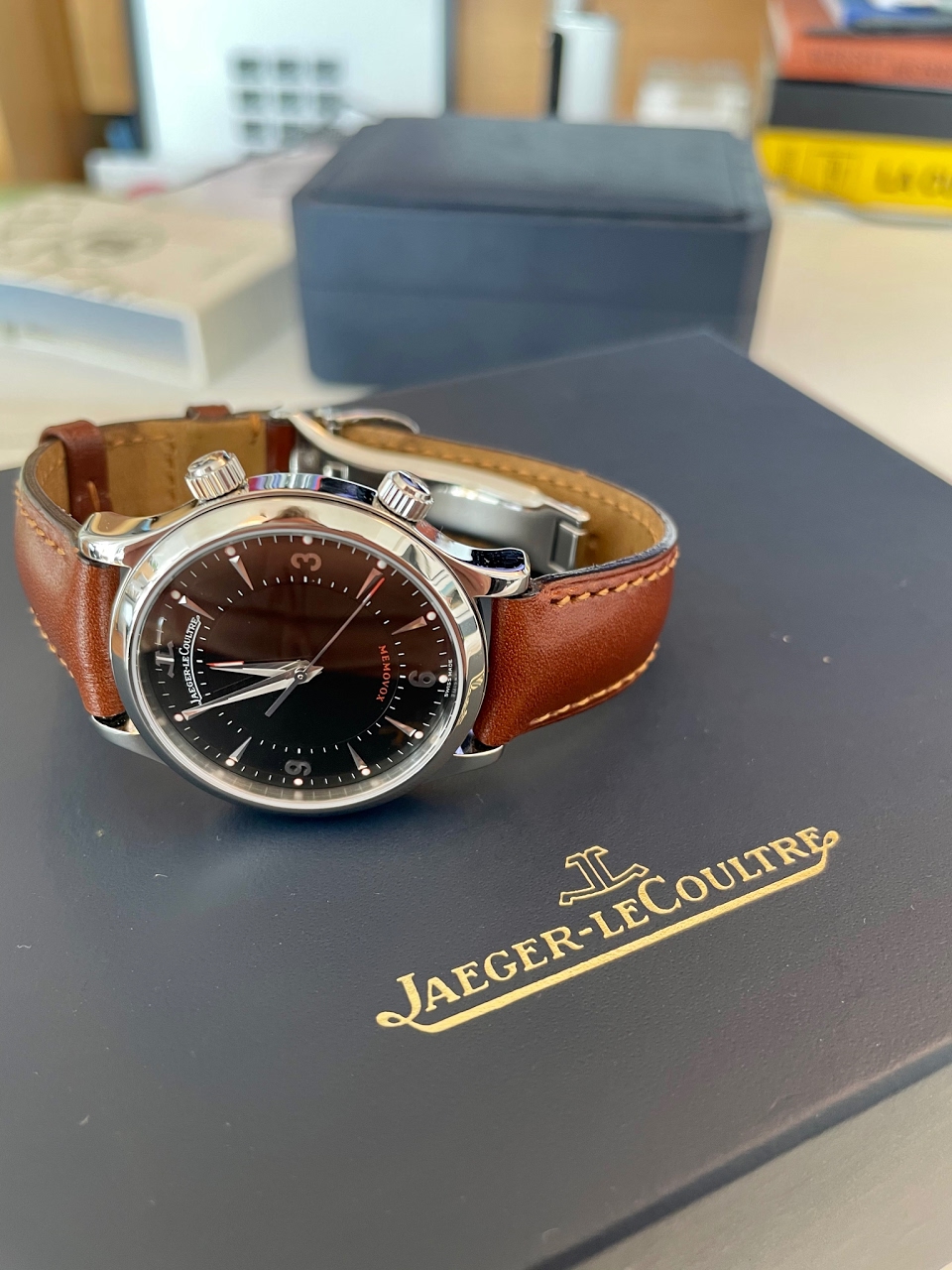 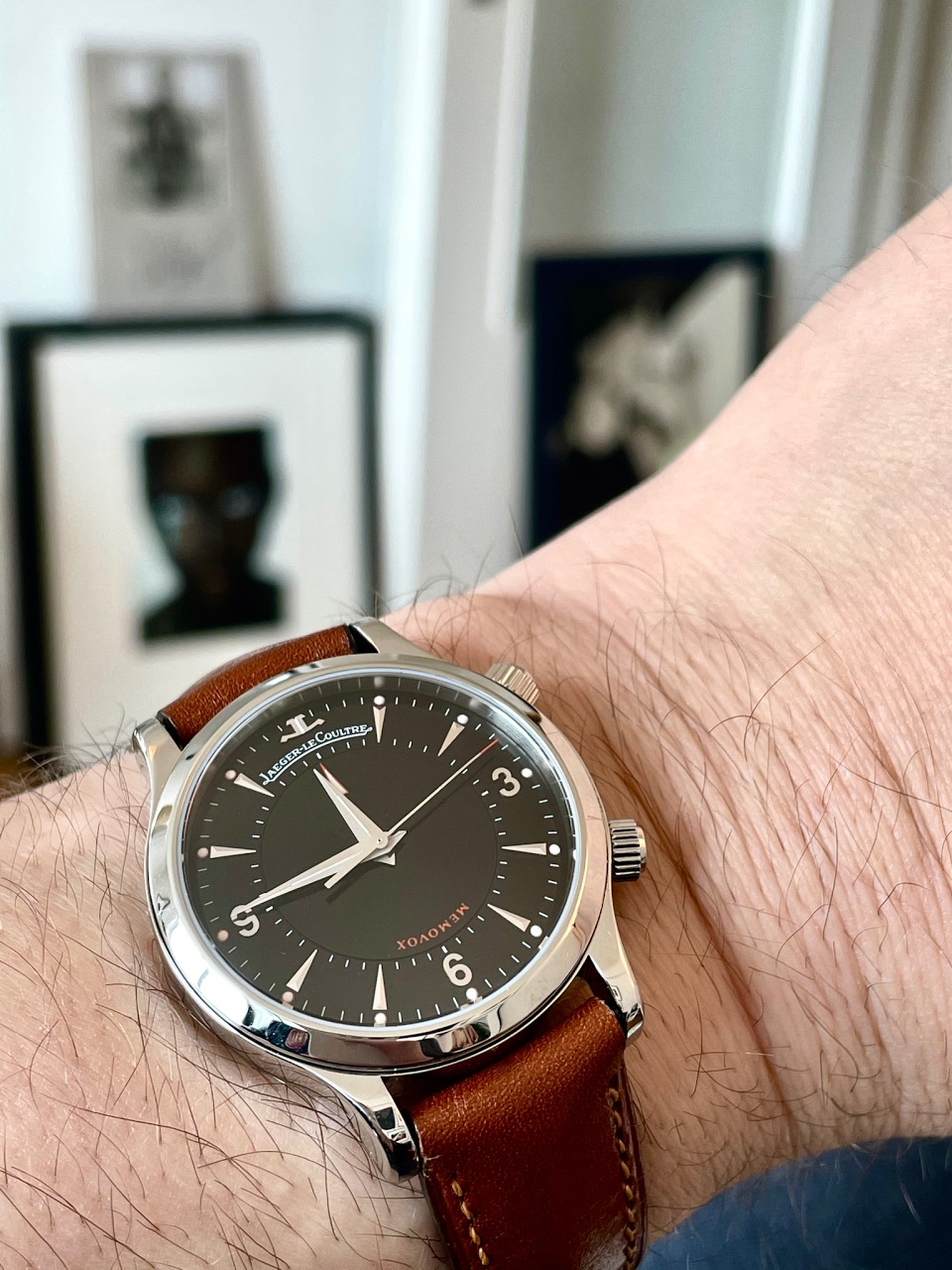 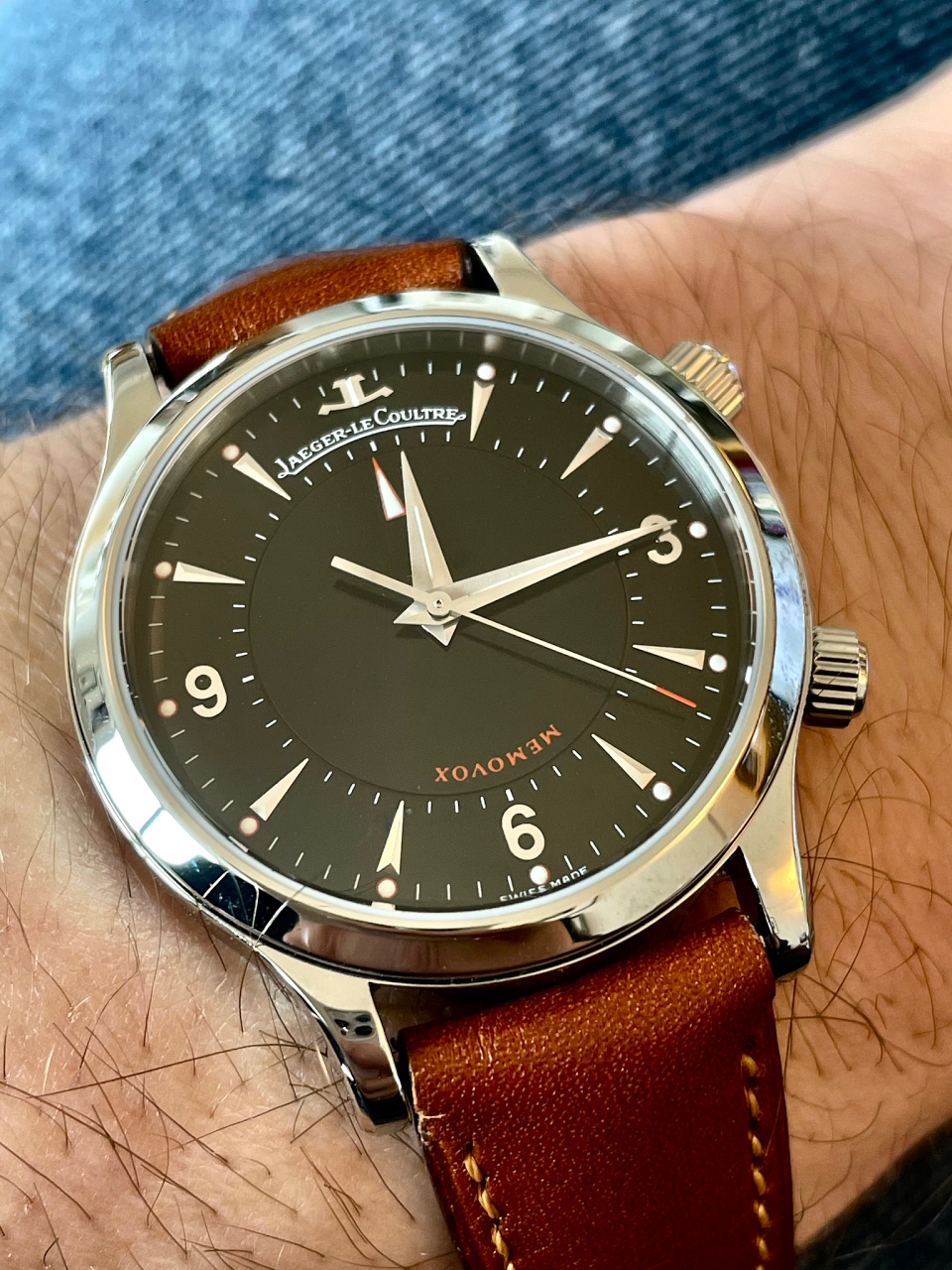 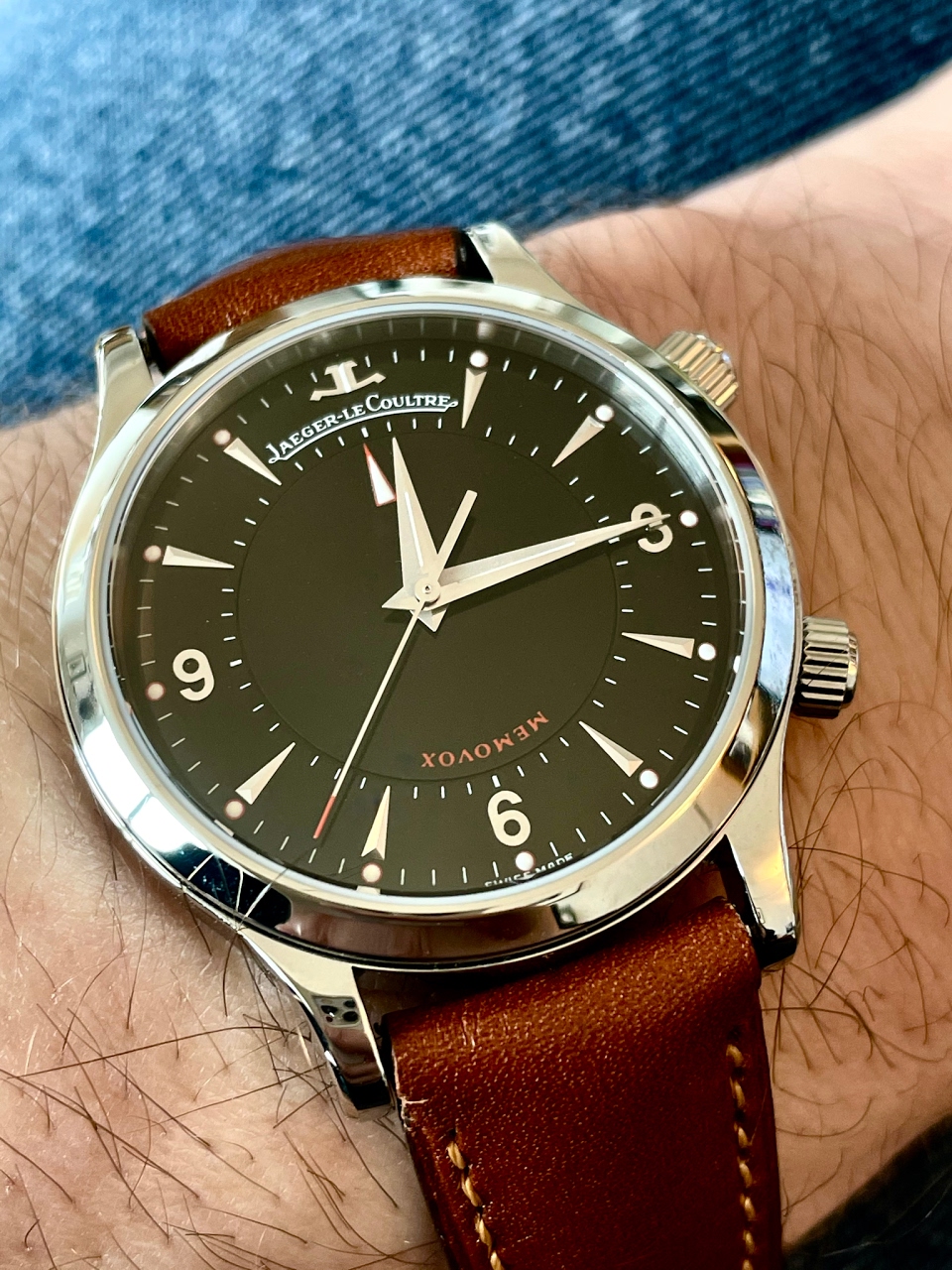 By: Alfihar : February 23rd, 2021-04:44
I had been looking at this watch for a while ... but I had forgotten it a bit ... But there was a post from Amanico that reminded me how much I liked it... It just arrived with her box and papers, all in perfect conditions: This Memovox model is not commo...
login to reply

Oh yes, I don't know if I had preferred the tritium dial and a bigger size but I'm very happy to have received it

Bravo for having collected this watch. I like it. I owned in the past a Master Control Memovox.

Thanks my friend. A really great one which match perfect with the colors of the Amvox 2 Dbs dial...

Congratulations, you got a special and rare model there.

By: hoseachandra : February 23rd, 2021-05:49
I'd get this if only I don't already have so many black dial watches including the IWC GST alarm which also use JLC caliber 916. Wear it in good health ...
login to reply

By: Alfihar : February 23rd, 2021-06:21
Modern black dial Memovox are quite rare (There is this one and the get with a more loaded dial). I also have a lot of black dials... Only two don't have a black dial (Reverso Gmt but with a verso black dial and jaeger chrono compax)... The Iwc Gst Alarm ...
login to reply

This is indeed a rare piece..

By: W72 : February 23rd, 2021-05:50
Remember it very well when I first saw it years ago. It was told it will be of collectible interest in future.. .. and looking at it now, they really are. Thanks for the detailed writeup and wonderful photos. /W72
login to reply

By: Alfihar : February 23rd, 2021-06:25
if you are looking for it, there is one for sale with tritium indexes on the French website cda. Best O
login to reply

Thanks Aperna. Don't be impressed, it's only a (fantastic) watch ;-)

By: roundel : February 23rd, 2021-06:15
Such a classic JLC. Finding one without the sapphire back cracked is not easy. Enjoy!
login to reply

That's true... A lot of sapphire case back are unfortunately cracked !

Great write up & even better watch. Enjoy wearing it 🙂👍

Thanks Jml. I will enjoy for sure

that is a beautiful Memovox !

Wow, my lucky bastardo friend, that is a great catch. Not that easy to find a complete box and papers and... In such great condition. A huge bravo.

Thanks to who ? You my friend. For giving me again the desire to hunt one and for your help during my moments of hesitation.

One more for pleasure

Awesome pick up 🔥👍. Dr Mamadou must be happy 😊

Thanks a small great one to help me to wait two bigger JLC...

By: Alfihar : February 23rd, 2021-21:25
I don't know much about what Dr Mamadou is thinking lately. It seems to me disturbing at the moment ... It is true that we have a little the impression of living in a gigantic world cloister in recent months ... Dr Mamadou is in the process of becoming Br...
login to reply

Hope all the Purists will spend a nice day !

It will be hard to beat your day, Twin Bro.

It's a really cool day... The sun is shining, the sky is blue... The Memovox at my wrist and some new nato for "my" JLC divers.

Have a nice weekend

So nice... Dr Mamadou may be a little bit jealous ! Hope you'll bring it with you ;-)

I can't get rid of looking at it.