A view on the Jaeger Lecoultre Master Extreme Lab One, with some fresh pictures. 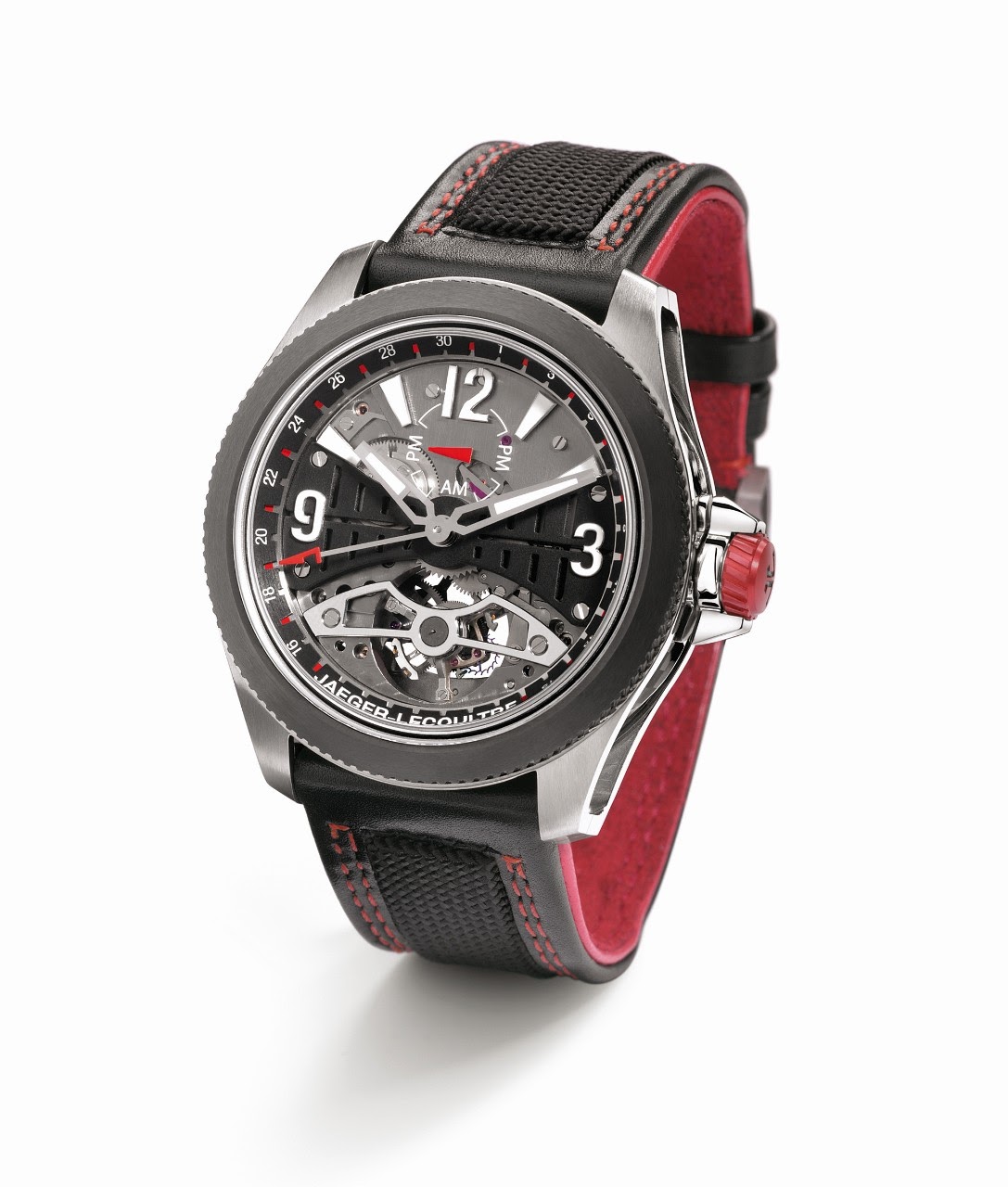 There are some watches I always ask to see when I visit the Manufacture, and the Extreme Lab 1 is one of them.
The reasons behind this obsession are simple:
- This watch is extraordinary from a technical point of view, it shouldn't be forgotten:
It is the first " Lab " which gave birth to some solutions adopted by some other watches such as the Extreme Lab II, of course, the Amvox 3 ( Rotor for both of these 2 ) and the Gyro Lab escape " wheel " in the Cal 770 / 772 ( Geophysic Universal Time / True Second ).
- At the exception of the Uysse Nardin Innovision, unveiled the same year, in 2007, there is no other watch like it / them. Both are totally lubricant free.
- Its rarity, only a few pieces ( three to five ) made and sold per year, you have almost no chance to see one in the metal, unless you visit the Manufacture and ask to see it.
- The aesthetics of the Lab One is something very close, in the spirit, to the rest of the Compressor line, but very different, too. Can you imagine this watch is ten years old? 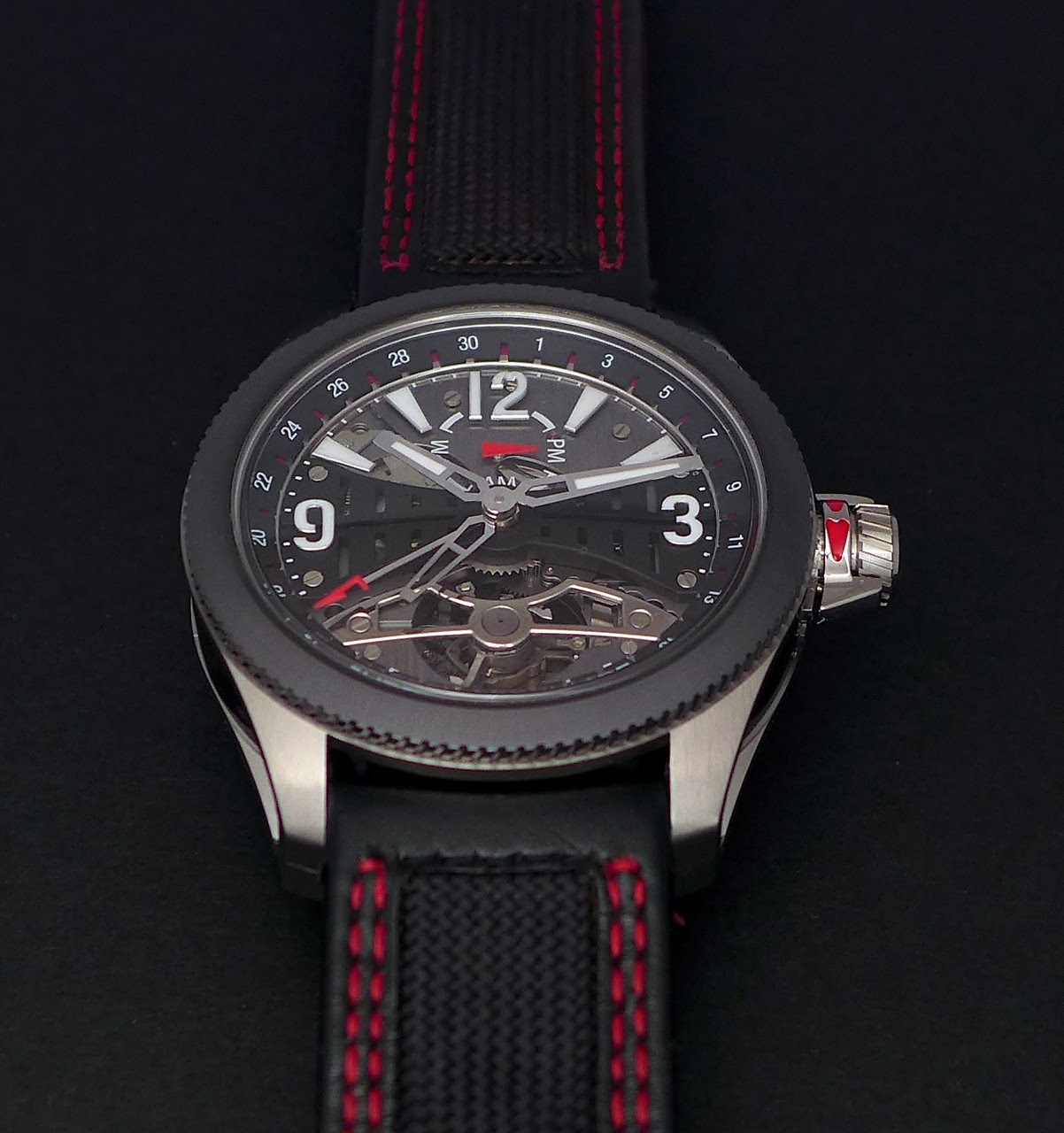 It is rare to have a strong look and to not be outdated after a while.
- This watch had a brother, the Extreme Lab 2... It calls for a second brother, a " 3 "... The merit of the " 1 " and the " 2 " is to feed our curiosity and our fantasy for a third opus, in the spirit of the two others. That would be even better if we consider that it has been too long since Jaeger Lecoultre made a new sports watch.
Technicality, originality, innovation, dynamism, futurism, these are the main characteristics of this time keeper which remains a watch you can use everyday, in the normal life, or in extreme conditions.
Let's go a bit deeper in the details to understand how the watch can work lubricant free:
-> The case: A center part in carbon, the rest of the case is made in titanium grade 5, at the exception of the bezel which is in silicon. It is 45 mm big, 14, 80 mm, but I can tell you that it wears a tad smaller, in the reality. 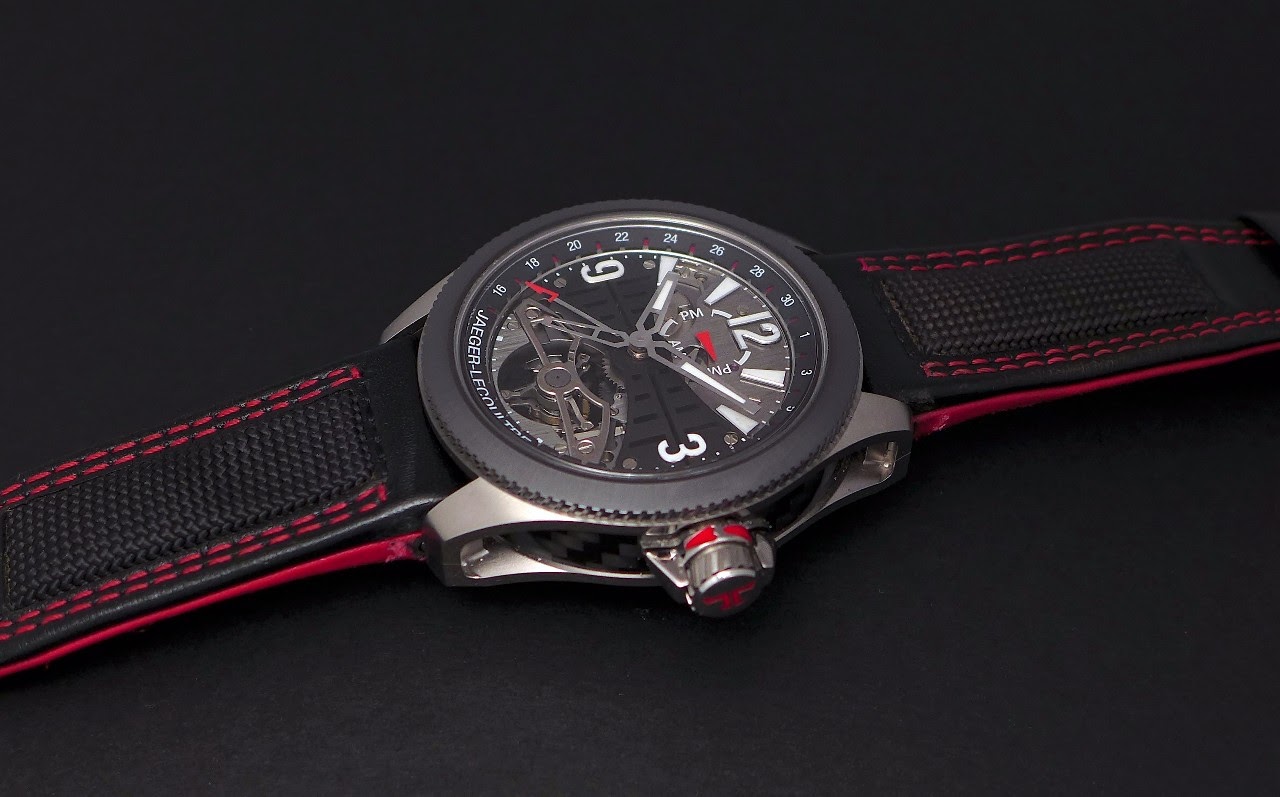 -> The movement is part of the dial, it IS the dial. The bridges are made in ticalium, which is a mix of aluminium alloy and  titanium. The movement is suspended, using red polyurethane.

The rotor uses iridium and platinum and carbon for the arms.
The escapement wheel is in silicium, and the spring has a Phillips terminal curve.
If it was not enough, the bearings are in easium, and the pallet in black diamond. The carriage of the tourbillon is made of magnesium. 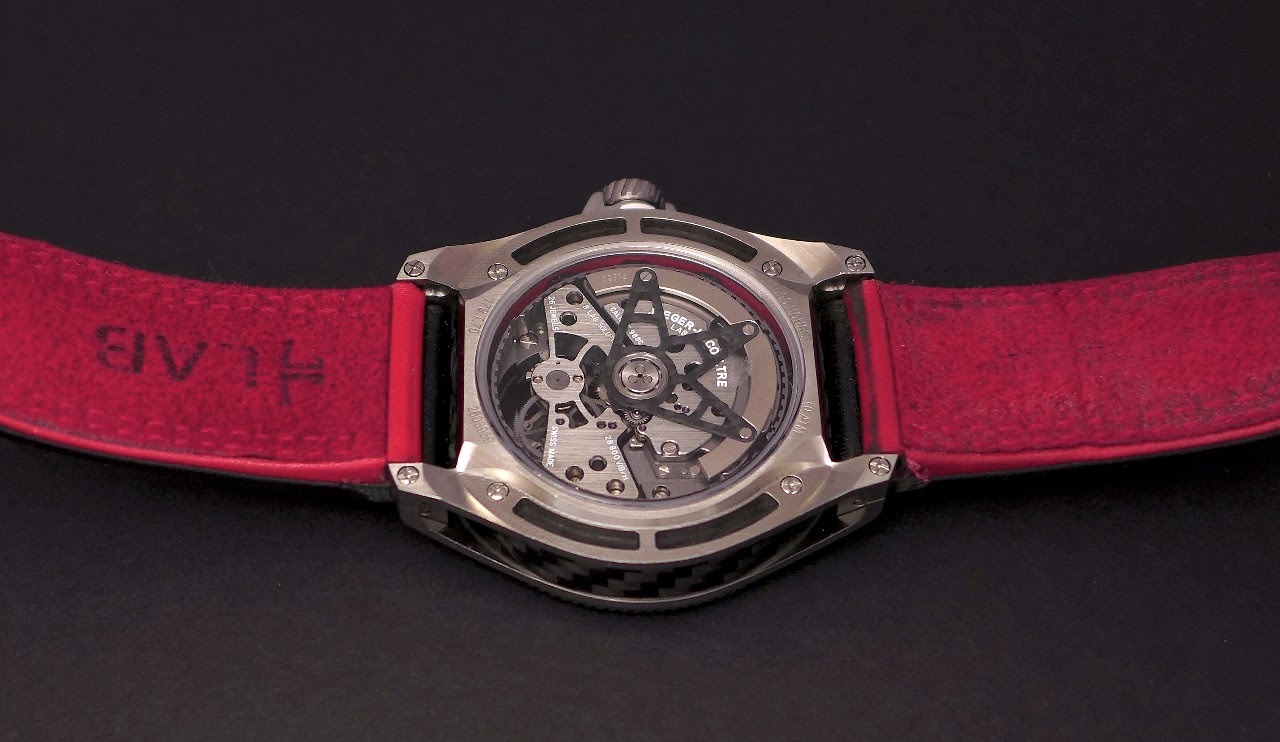 What about the Performances, after all these informations and explanations?
The Cal 988C beats at 28, 800 alternances per hour, is of course automatic, and offers a power reserve of 45 hours. I wold have expected more from the power reserve, to tell the truth, as it is nothing exceptional.
The functions: A tourbillon, time, second time zone, AM / PM indicator and the date which jumps from 4 to 8 o' clock for the 15th and the 16Th day of the month.
The watch can work under extreme temperatures: From - 40 C° to + 60 C°.
Along with the suspended and the lubricant free movement, it tells all about the fact that you are certainly facing the most modern, innovative, robust and expensive tool watch ever made.
Those who doubted that a tourbillon can be housed in a sports watch can be re assured.
And it has the mystery and appeal of a concept watch which saw the light of a very short production. 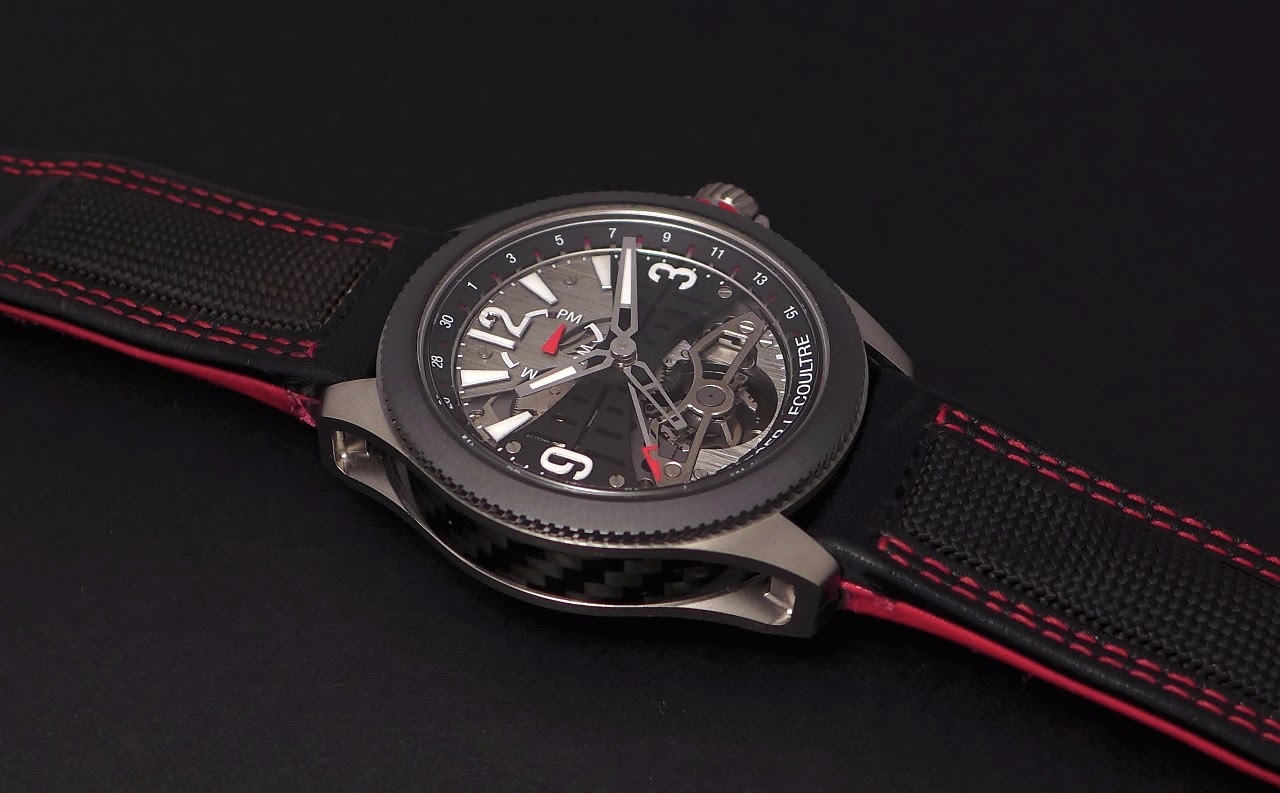 Looking forward to reading your comments and thoughts,
Best.
Nicolas

A view on the Jaeger Lecoultre Master Extreme Lab One, with some fresh pictures.

By: amanico : August 2nd, 2017-02:36
There are some watches I always ask to see when I visit the Manufacture, and the Extreme Lab 1 is one of them. The reasons behind this obsession are simple: - This watch is extraordinary from a technical point of view, it shouldn't be forgotten: It is the...
login to reply

Very cool piece without a doubt

By: keks : August 2nd, 2017-03:00
Would be very interesting to see in the real. 45mm on paper not small but otherwise everything about it is super cool. Personally would love to see a non-tourbillion 41mm version of an extreme lab using the material in this one...
login to reply

You don't like the carbon fiber in the center case? [nt]

By: Gelato Monster : August 2nd, 2017-03:00
Thank you for sharing The Extreme Lab 1 shows how avant garde JLC engineering team is. How many in total productions?
login to reply

The unicorn that did live

By: Joepny : August 2nd, 2017-04:20
The Extreme Lab amazes me because I know its son. Especially the more I wear and use my EL II and enjoy it, I think what it would be like to put on the father and enjoy its tourbillon. A watch that proves that JLC is the watchmaker's watchmaker.
login to reply

True! When I had the Extreme Lab 2 for an on the wrist review, I was thinking exactly the same. [nt]

We have the same hopes, my friend. [nt]

The Extreme LAB 3 has to be the TOP of the new sports range.

It was cool 10 years ago and it is still cool today! And I want one.

By: DSF : August 2nd, 2017-05:16
Thanks for sharing the awesome pictures and the detail descriptions. I saw this rare BEAST in Watches and Wonders a few years ago and I was immediately seduced by it ever since. I noticed in the 1st picture the crown is red but in the other pictures the c...
login to reply

The big difference between the One and the Three, digital Chrono / tourbillon apart is that the Lab One is a lubricant free movement. The rotor is the only common point.

Thank Nicolas for the quick respond.

Totally my mistake. The only common thing is the rotor. [nt]

Very cool watches, and have not seen pics of the EL1 in some time.

We are many to expect something like that! [nt]

By: willski : August 3rd, 2017-07:38
Which is why the Grande Maison should rise to the challenge and include such innovations in a nice case size
login to reply

I hope they will read us and listen to us. [nt]

This is where JLC surprise and delight... may they be developing something truly amazing for us all! [nt]

You know what I think ;) GRAIL.

By: cory : August 4th, 2017-00:17
Awaiting the LAB III... 41mm would be a dream! I really like the tourbillon As long as the next has the Gyrolab balance an evolved or NEW concept case with some epic tricks... I will be happy!
login to reply

Ok no tourbillon but it must be top... The Pinnacle above all else.