Schaffhausen, 9th September 2021 – IWC Schaffhausen has launched three new chronographs in its Pilot’s Watches collection. The new ceramic models are directly inspired by timepieces that the brand created in the context of its military programme in collaboration with selected squadrons of the U.S. Navy. The Pilot’s Watches Chronograph Editions “Royal Maces”, “Tophatters”, and “Blue Angels®” all feature the respective squadron patch on the dial and eye-catching details in the corresponding unit’s colour scheme.


Ever since IWC engineered the first Pilot’s Watch 85 years ago, the company has fostered an in-depth dialogue with pilots to precisely understand their specific needs and requirements. This exchange has been particularly crucial for developing the brand’s mil-spec service watches, like the Mark 11 for the British Royal Air Force. Today, IWC continues this dialogue within the frame of its military program, which emerged from the brand’s partnership with the U.S. Navy. Since 2018, IWC is licensed to work on watches for the entire U.S. Navy and Marine Corps aviation units, including Blue Angels® and the 247 active and 100 inactive squadrons. IWC has since collaborated with more than a dozen squadrons to create special editions that are exclusively available to present and former members.

Now, IWC releases three new chronographs in its Pilot’s Watches collection, which are directly inspired by the brand’s collaborations with U.S. Navy squadrons, marking the first time these designs are available to non-pilots. The annual production of these chronographs will be limited to 500 pieces each.

Strike Fighter Squadron 27, known as the “Royal Maces”, is stationed at Marine Corps Air Station Iwakuni in Japan and forms part of Carrier Air Wing 5. The Pilot’s Watch Chronograph Edition “Royal Maces” (Ref. IW389107) is inspired by the military-exclusive edition IWC has developed with members of the squadron. The chronograph features a black zirconium oxide ceramic case. The pushers and the crown are made of Ceratanium®. The dial features the “Maces” patch at 6 o’clock and also has a yellow day-date indication. The yellow stitching on the strap, the tip of the chronograph seconds hand and the small seconds add details in the signature “Maces” colour. The case back is made of grade 5 titanium and features an engraving of the squadron’s F/A-18E Super Hornet jet next to the official squadron denomination “VFA-27”.

Naval Air Station Lemoore in California is the home base of The Strike Fighter Squadron 14, nicknamed “Tophatters”. Having formed in 1919, VFA-14 is the Navy’s oldest active squadron. The Pilot’s Watch Chronograph Edition “Tophatters” (Ref. IW389108) has a case made of black zirconium oxide ceramic. The chronograph pushers and the crown are manufactured Ceratanium®. Developed by IWC, this material is as light and robust as titanium and at the same time similarly hard and scratch-resistant like ceramic. The squadron’s patch with the classic top hat can be found at 6 o’clock on the dial and engraved on the titanium case back. The day-date display, the tip of the chronograph seconds hand, the small seconds and the stitching on the black calfskin strap add more details in the squadron’s characteristic red.

Established in 1946, the “Blue Angels®” U.S. Navy Flight Demonstration Squadron is currently made up of 141 members from the Navy and Marines. The Pilot’s Watch Chronograph Edition “Blue Angels®” (Ref. IW389109) is the third timepiece to emerge from IWC’s license agreement. Inspired by the military-exclusive watch developed with Blue Angels members in Pensacola, the chronograph features a blue ceramic case. The bright blue colour is the result of mixing zirconium oxide with other metallic oxides. Here, too, the chronograph pushers and the crown are made of IWC-developed Ceratanium®. The iconic “Blue Angels®” crest with the U.S. Navy Wings of Gold is at 6 o’clock on the dial; the characteristic lettering is engraved on the titanium case back. Yellow details are provided by the chronograph seconds hand, the small seconds and the day-date display at 3 o’clock. This watch is fitted with a blue rubber strap with textile inlay.


The IWC-manufactured 69380 calibre movement powers the new chronographs. Consisting of 231 individual parts, this mechanical chronograph movement is engineered with a focus on robustness, reliability and precision. A column wheel controls the stopwatch function. The bi-directional pawl-winding system supplies the movement with energy, building up a power reserve of 46 hours. The timepieces also feature a soft-iron inner case to protect the movement efficiently from the effects of magnetic fields. The front glasses are specially secured to avoid displacement in the case of sudden drops of air pressure. The Pilot’s Watches Chronograph Edition “Royal Maces”, Edition “Tophatters” and Edition “Blue Angels®” will be available from September 9th through IWC boutiques, authorised retail partners or online on IWC.com . The timepieces are eligible for registration under the My IWC care program and thus benefit from a 6-year extension to the standard 2-year International Limited Warranty. 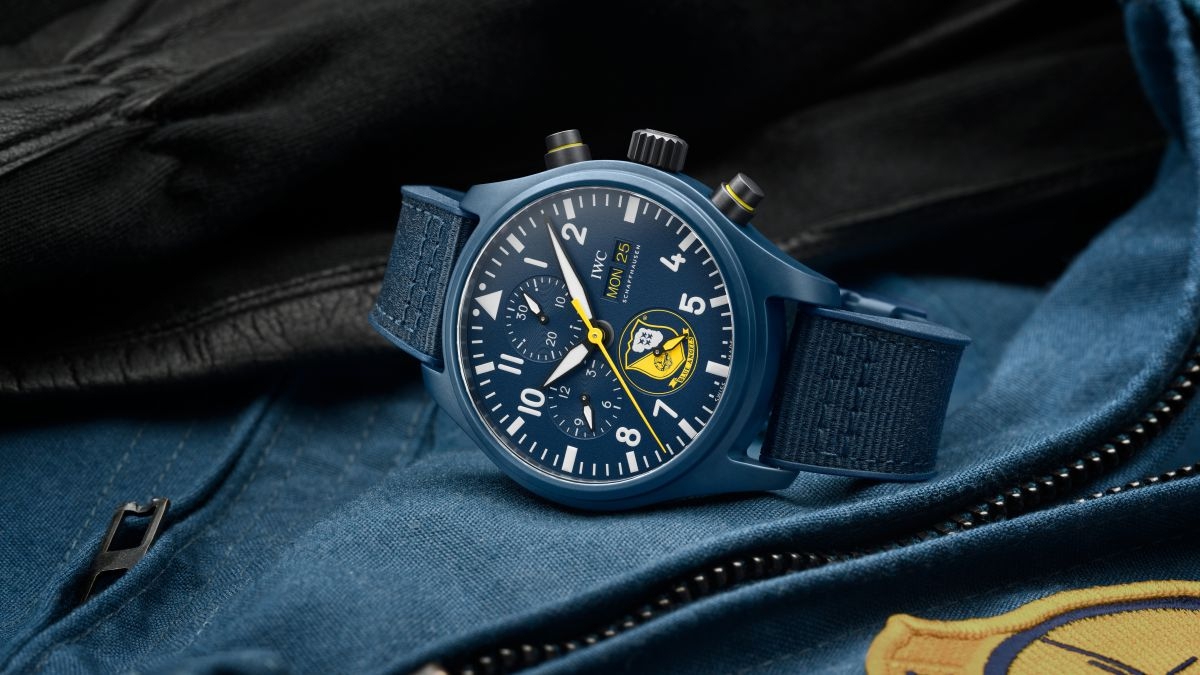 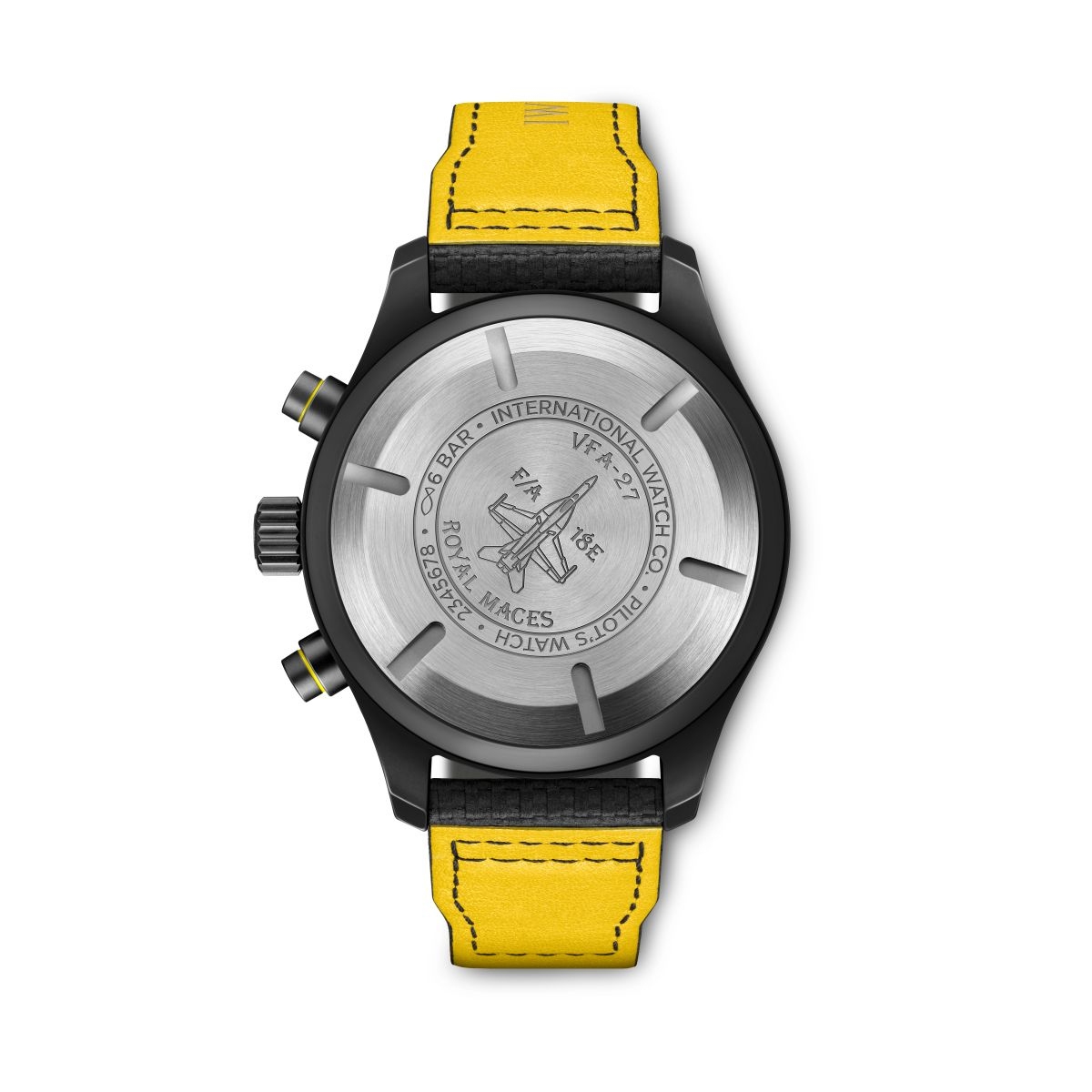 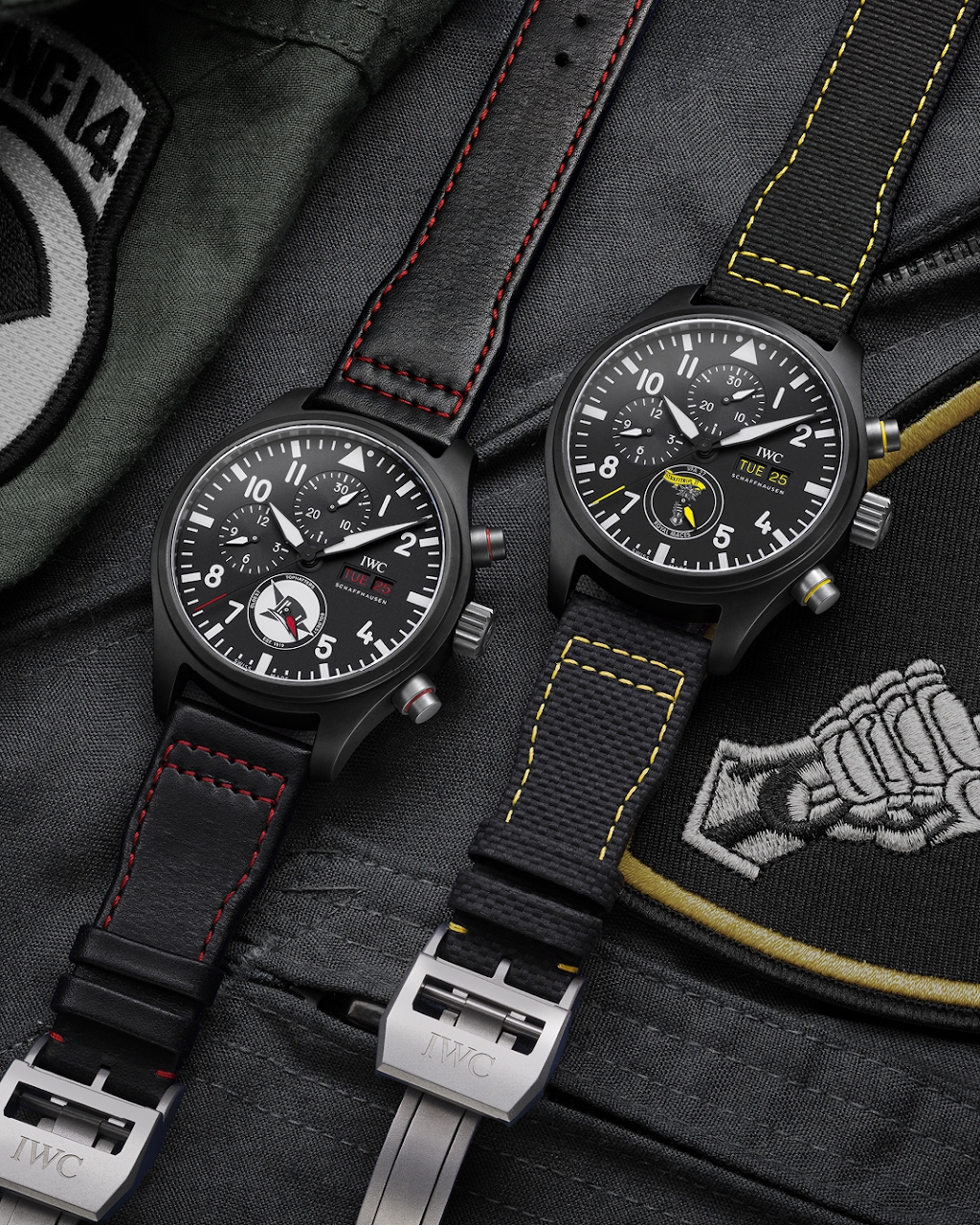 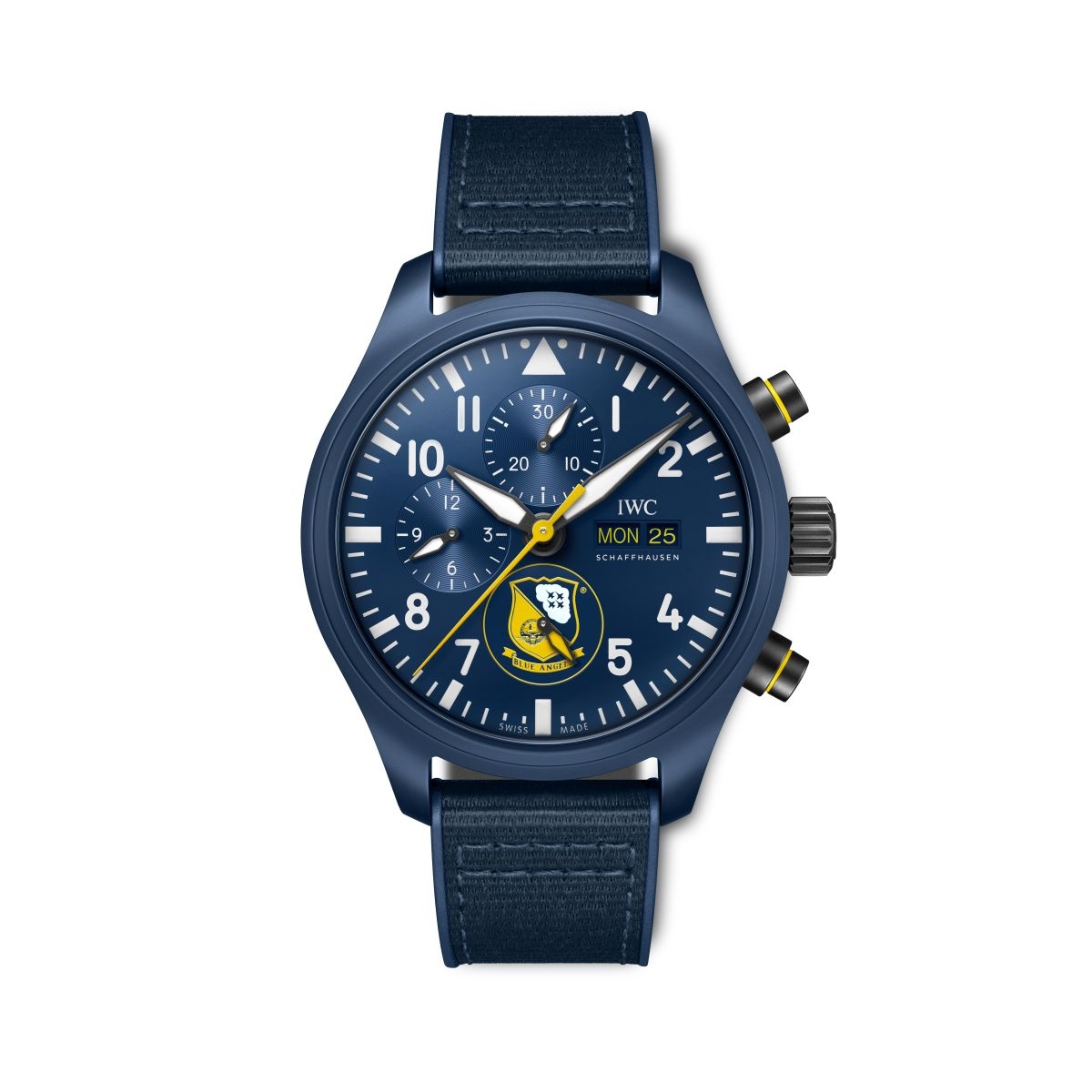 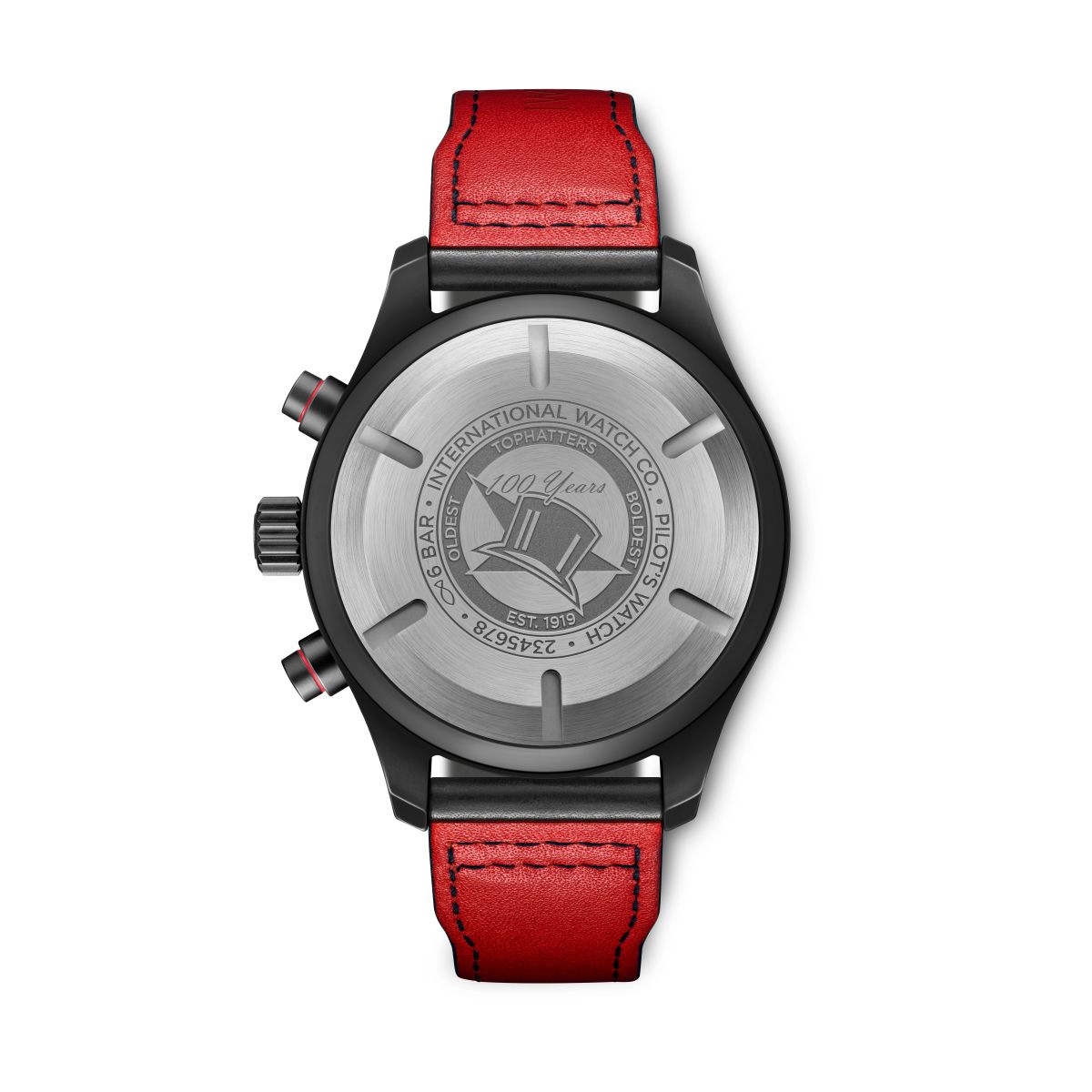 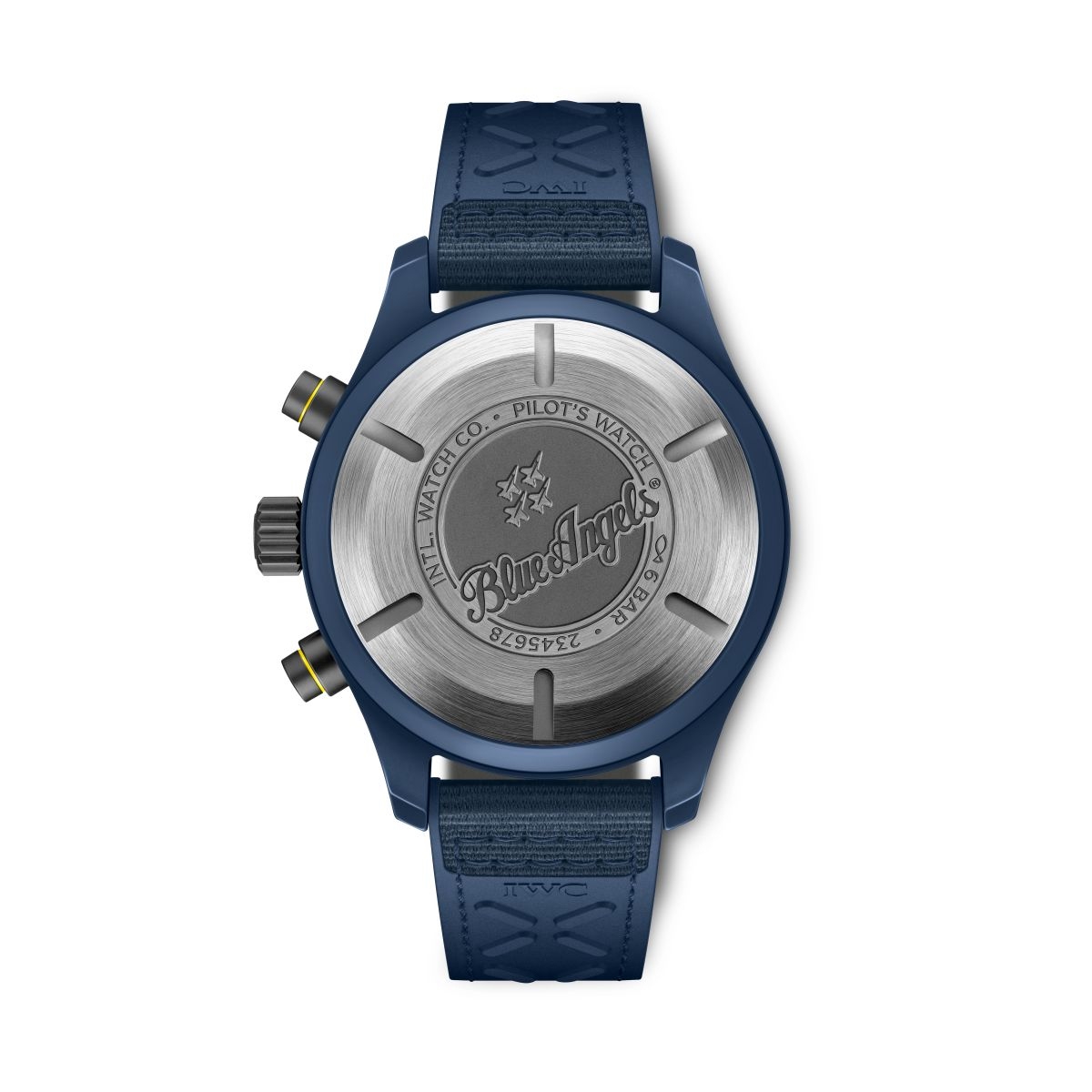 By: India Whiskey Charlie : September 9th, 2021-19:20
Schaffhausen, 9 th September 2021 – IWC Schaffhausen has launched three new chronographs in its Pilot’s Watches collection. The new ceramic models are directly inspired by timepieces that the brand created in the context of its military programme in colla...
login to reply

By: 997c4gts : September 9th, 2021-19:52
They’ve come up with some great releases with this collaboration for us civilians! Love the different pops of colour!
login to reply

There’s another pet peeves I forget to add…

By: Clueless_Collector : September 9th, 2021-19:56
Misalign case back not upright like Naiad lock 😬
login to reply

Could the day/date be any closer to the center of the dial?

The date position on the dial doesn't seem to have changed from past iterations...

Agreed. And my comments apply to those models as well.

Ahh thanks for this comparison.. for some reason these models highlighted the day date orientation more so then the original .

Let's remember that the dial layout is largely contingent on where the date is on the movement...

By: India Whiskey Charlie : September 12th, 2021-16:47
Which is used in watches sized from 41 mm to 44.5 mm (including other non-pilot models). IWC, for obvious reasons, is not going to re-engineer the movement to fit the different case sizes. The date may appear closer to 3 o'clock in a 41 mm case whereas it...
login to reply

By: India Whiskey Charlie : September 10th, 2021-00:55
"All three models in the IWC Pilot’s Watch Chronograph Squadrons Collection use the brand’s in-house 69380 automatic chronograph movement. Although there is a superficial similarity between the 69380 and the long-running Valjoux 7750, the 69380 is markedl...
login to reply