In a world dominated by luxury sport watches, not just the usual two, but Moser, Chopard, Bulgari and Overseas to name but a few, there is an obvious omission- a true child of Genta. 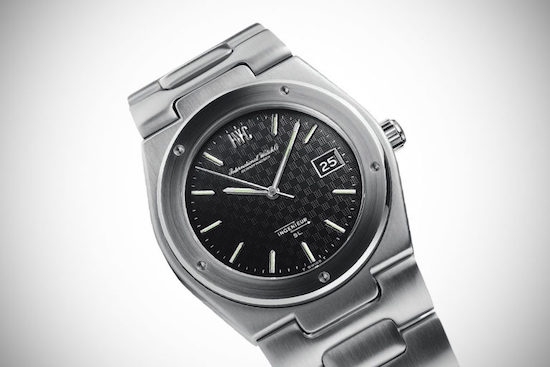 We all know well, the first two offspring from the Genta. But the third child- well let’s say this child didn’t live up to the family expectations. Now the opening statement may seem very harsh, but the current state of the watch world takes no prisoners. I wanted to see just why it is that potentially the best of the trilogy, has failed to meet the mark, and just how close could we be to a new modern legend. 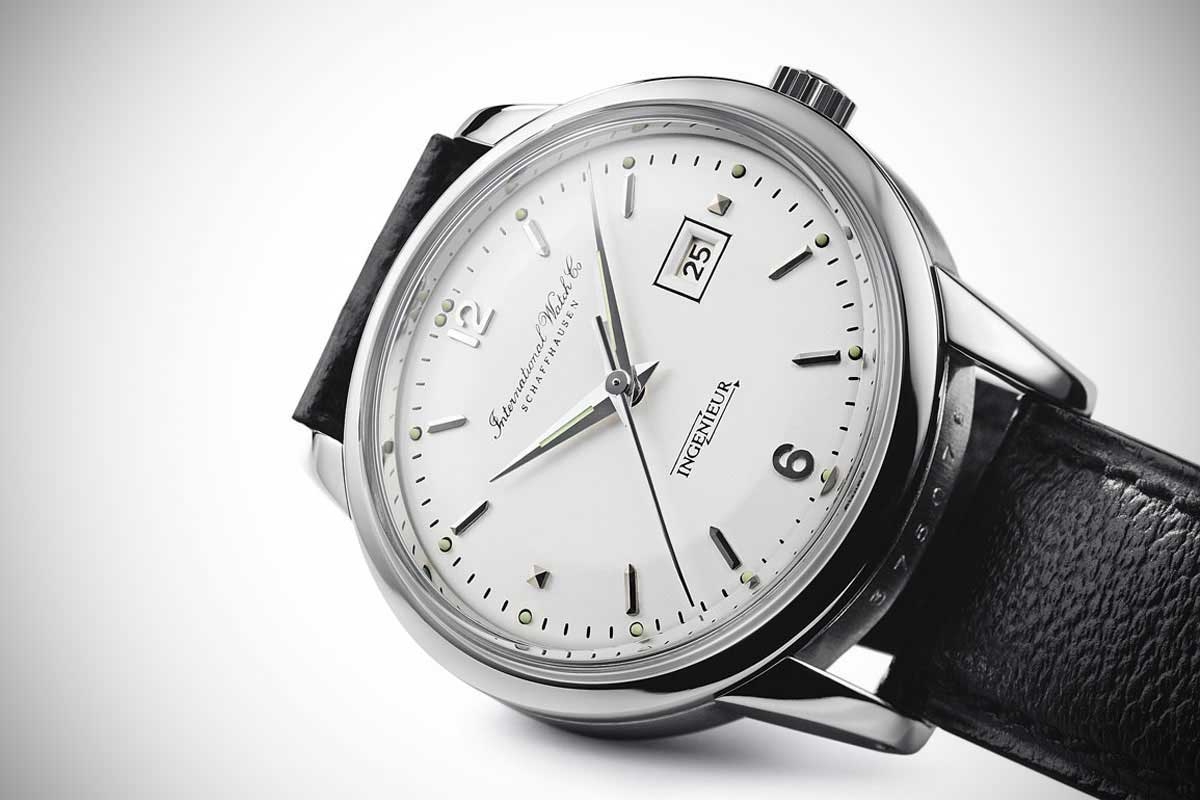 In fact, I would dare say even in today’s market, this make for a serious tool watch. And therein is the first problem for the Genta Ingenieur. For Audemars Piguet and Patek Philippe, the Royal Oak and Nautilus respectively, didn’t have any benchmark to live up to- they were totally new collections. For IWC this was certainly not the case, the name Ingenieur had a reputation, any new iteration had a lot to live up to- especially if its going a transformation as radical as the SL. 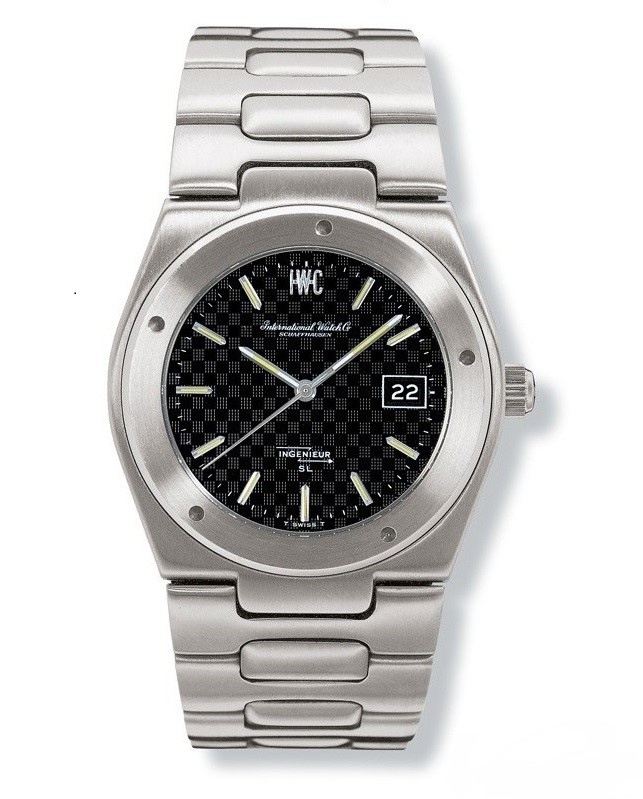 The launch of the SL in 1976 was radical. The new watch borrowed on design elements from both Royal Oak and Nautilus. It was 40mm diameter but whereas both the other two were merely 7mm thick (thanks to the outsourced JLC calibre), the SL was notably thicker and had a far bulkier appearance. Performance wise it was still water proof to 120m and still antimagnetic to 80,000 a/m. It did however have a wonderful chequered dial. However, IWC confused the picture by also introducing a non-anti magnetic version, and even a quartz version. It is believed only 1000 pieces were made.

Poor sales meant that IWC introduced a more refined version in 1983. The new version had a far more refined- I would say more elegant case and integrated bracelet. It was smaller however at 34mm. 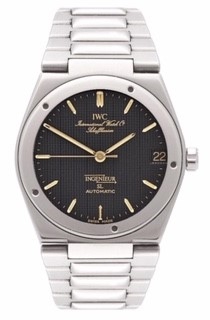 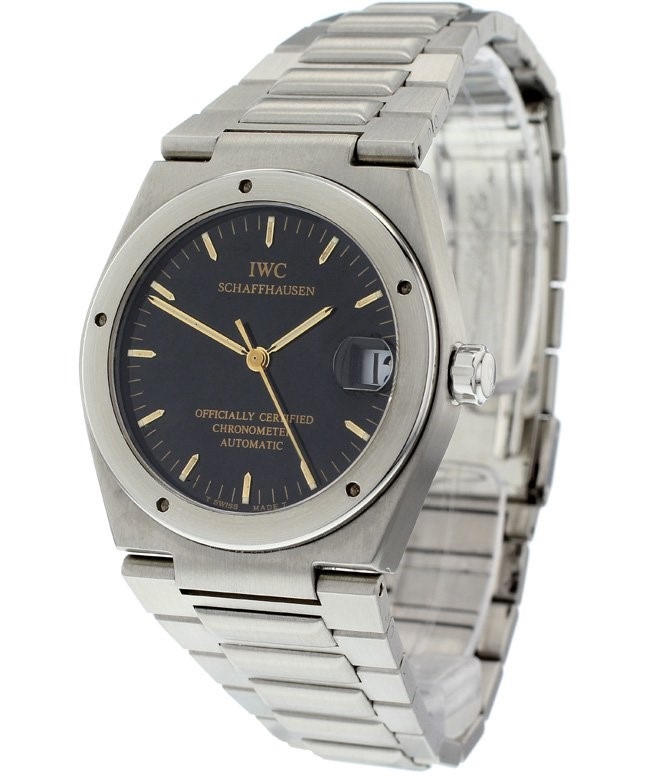 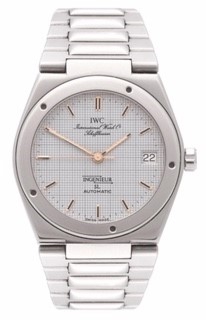 The new 34mm case was only 8.6mm thick and was available as gold and bi-metal. An interesting piece is the gold perpetual calendar with a 34.5mm case, the reference 9425.Eventually though, the references were discontinued by the year 2000. There were also quartz versions. 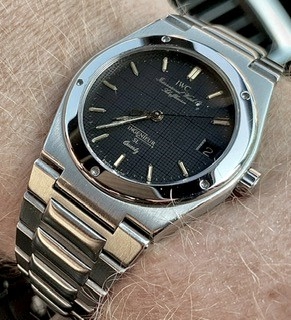 A special version was introduced in 1989, which used novel materials (niobium-zirconium 25, an iron-free and nickel-free alloy) to enhance the antimagnetic properties to 500,000 A/M. 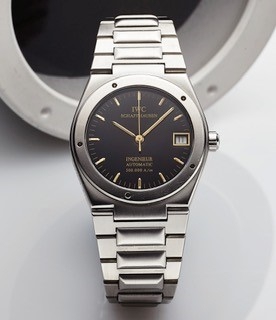 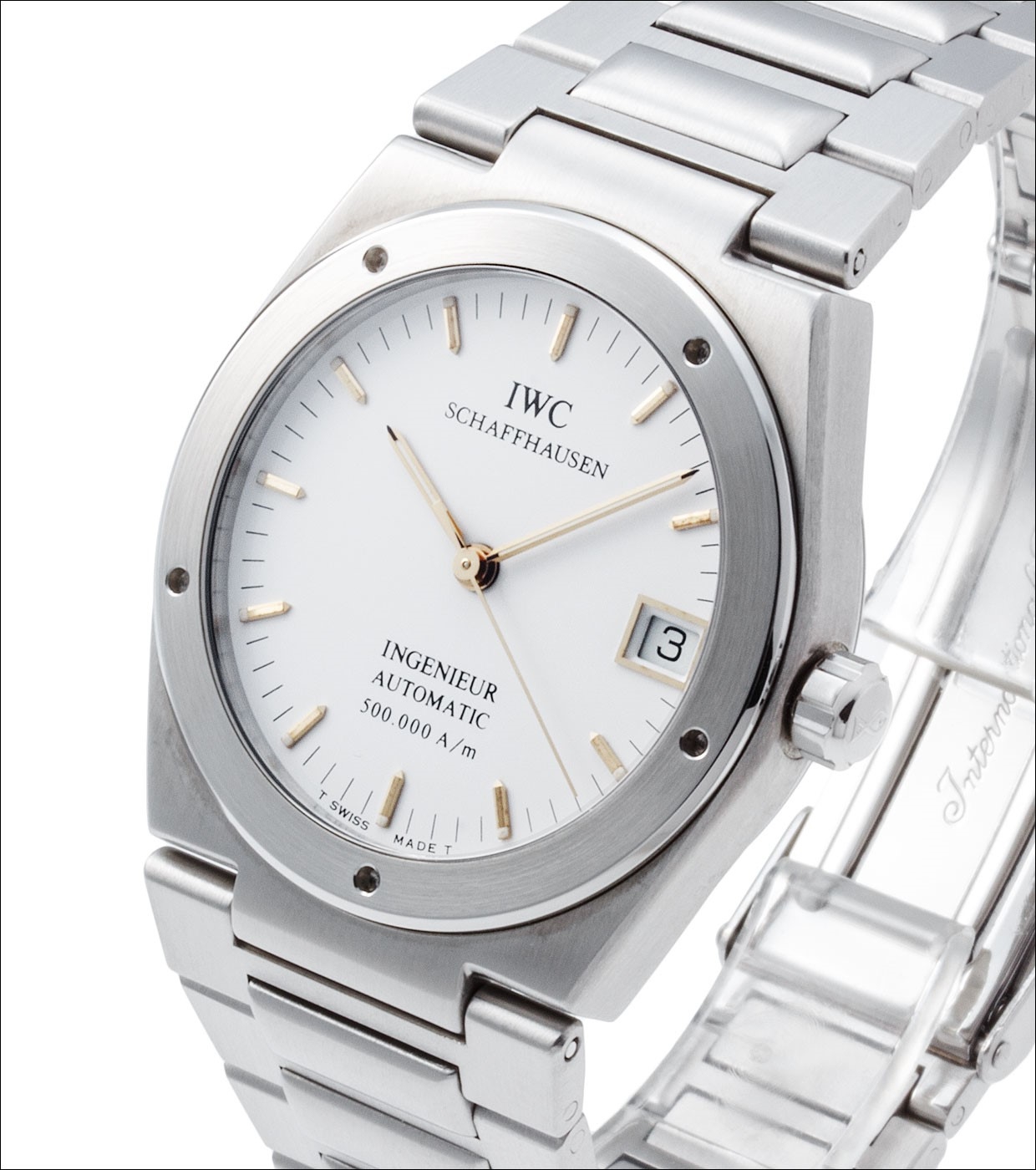 The new 34mm case was only 8.6mm thick and was available as gold and bi-metal. An interesting piece is the gold perpetual calendar with a 34.5mm case, the reference 9425.Eventually though, the references were discontinued by the year 2000.

It was in 2005 that IWC next tried to resurrect the original SL with the launch of the reference 3227. The IWC Ingenieur 3227 marked a new wave of SL inspired timepieces, with a case in 42mm.The collection diversified in a plethora of designs and collaborations with AMG. In my opinion this just confused the collection, diluted the DNA. There was (is?) an obsession at IWC to just make it as big as possible. Perhaps there was an undue influence from the Offshore Royal Oak series, or even the Patek 5980, which came in 2006. 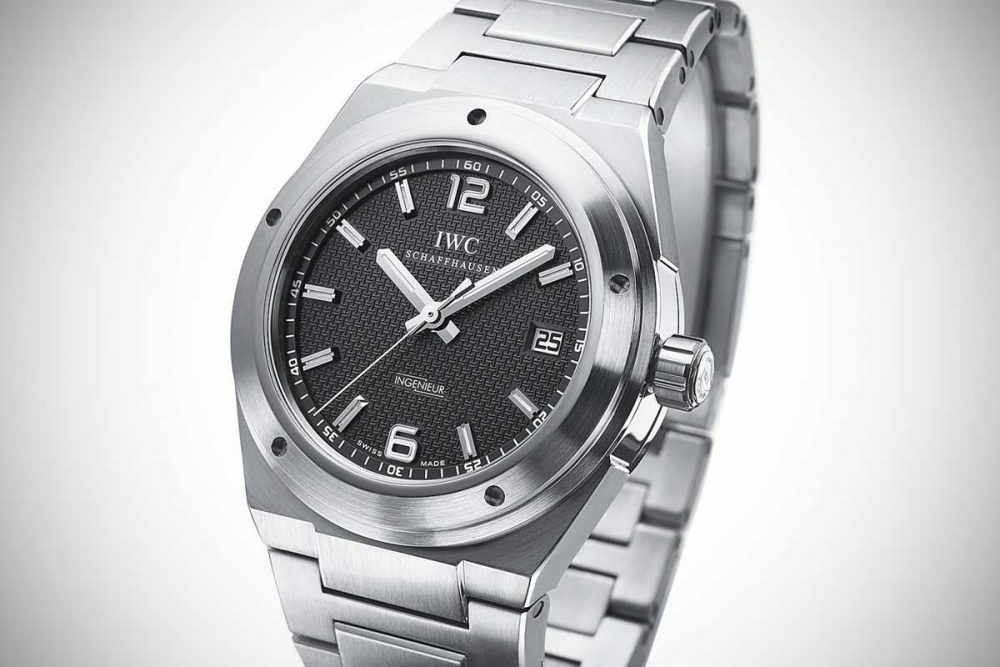 There was in all this chaos however a star. The reference 3228. At only 40mm, it was made in only 700 pieces, but was not a limited edition. Today it is the most collectible of this entire era. Its proportions were spot on. So why did it not take off? Wong place, wrong time. You can see them flying off the shelf if it were today- probably with a wait list. IWC did comeback with another 40mm version with the reference 3239, but had some ungainly in my opinion crown guards and overall the look was less sleek versus the 3228. The collection was killed in 2015. 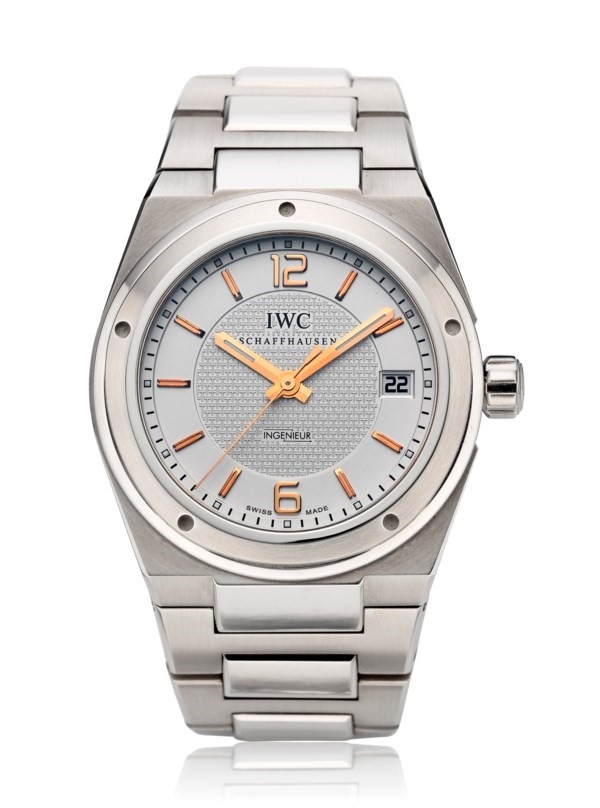 So, is it over for the Genta Ingenieur? I believe right now is the right time for a fuel injected revival. Interest in the vintage pieces has increased and respect is there for the 1976 SL.

So how and what should IWC do? Stick to the DNA. See what was the best from the rich history. I would revive the original SL dial- its gorgeous. The 34mm case of the 500,000 A/m, sleek and elegant, make it 39-40mm maximum, keep the thickness down below 100mm, preferably around 8mm. I would ensure 120mm water resistance.  I would also use new technologies and revive an amagnetic movement like they did with the reference 3508 500,000 A/m.

Would IWC put such an effort in? I believe a so. I have heard whispers. I hope they stick to the classic proportions and feed on the vintage DNA. Get this right, and IWC will take their rightful place at the top table of the luxury sport watch as a true Genta heir.

By: Miranda : December 28th, 2021-17:00
In a world dominated by luxury sport watches, not just the usual two, but Moser, Chopard, Bulgari and Overseas to name but a few, there is an obvious omission- a true child of Genta. We all know well, the first two offspring from the Genta. But the third ...
login to reply

I belief it is a dead horse

By: Weems@8 : December 28th, 2021-17:33
Maybe the wrong name. Maybe the watch attracts almost nobody. It is absolutely nothing for me. Albeit i do not want a PP Nautilus either. Overseas, Royal Oak. That are tru power bulls, i want that on my wrist!
login to reply

In the current thirst for this genre, if IWC hit the nail down on the head

By: Weems@8 : December 28th, 2021-22:14
Agree. My thoughts also, IWC have good models. Da’vinci, Portefino, Big Pilot, etc that are better known by the public. It’s the same as Rolex his famous models and the unknown Cellini. Stay posting. I am changing i feel. See a lot of independents and i a...
login to reply

Great article and very informative - Thank you ! The Jumbo SL has intrigued me for some years, especially since it was the only tool watch out of the three all steel Genta designs at the time.

By: templetowers : December 28th, 2021-18:22
I have nearly pulled the trigger on many occasions, but since I have never seen one in the flesh to try it on the thickness has always put me off...
login to reply

I agree, but if it comes in 8-9mm it could be a game changer

By: Cookies : December 28th, 2021-19:12
Thanks for the write-up. After reading it, the niobium alloy version fron 1989 has become my grail watch. I agree that it was the wrong place and wrong time, and that now may be a very good time to release a proper heir to the line. I wish they made somet...
login to reply

Wow, I would wait see what comes...unless 34mm is a preferred option

I agree everything you said, lets say our prayers might be answered, now it’s about IWC getting it together

By: als1678 : December 28th, 2021-19:42
Not reviving the original engineer in some form is an enormous failure of IWC leadership. There are two excuses, which only make sense as such in the Swiss watch industry which is still stuck in the previous century : releas schedule is determined years a...
login to reply

I hope so and totally agree with you

Great read, thanks. I agree with your musings

By: RabidManatee : December 29th, 2021-01:13
but am not optimistic that a return to the brand’s roots will be made without a regime change. I used to own an “early” Mark XV, before or at the time of the brand’s sale. I miss it. But it’s been quite some time since I’ve wanted a new one. To be sure, I...
login to reply

A hands on perspective

When a puristpro moderator and Fratello write about the ressurection of Ingenieur at the same time....