Lately one could argue that there has been an overdose of collaborations, none more so that the Louis Erard Alain Silberstein watches which have a character of their own thanks to Silberstein's input but when one is promised a limited edition of 178 pieces, one would not expect a few other editions afterwards with a different dial or different strap colour.

Saying that we obviously would make comparisons between each reiteration and I have come to the conclusion that the latest collaboration with the Stephen Silver Jewellery Company which is based in Silicon Valley USA has arguably the most attractive dial of the three releases. What I like about this dial is the blue minute counter which not only gives the dial a lovely contrast but also makes the dial appear a bit smaller.  The two watches released are the La Semaine that has a date and tells the day of the week via a smiley face that gets happier as the week progresses and also the Regulateur, a Louis Erard favourite,  The La Semaine is limited to 72 pieces and can be bought individually while the Regulateur is only available as a box set  with the La Semaine, limited to 28 pieces.
The watches are 40mm in diameter, 47mm lug to lug and are 11.7mm in height, all very wearable. The movement is the ever reliable automatic Sellita SW220-1 and the case is in titanium.
Those who know me would know that I have a weakness for dress watches.  However,  to avoid being accused of being overly predictable and somewhat a creature of habit, I could not ignore the fun factor of these watches so I have decided to add the box set to my collection. 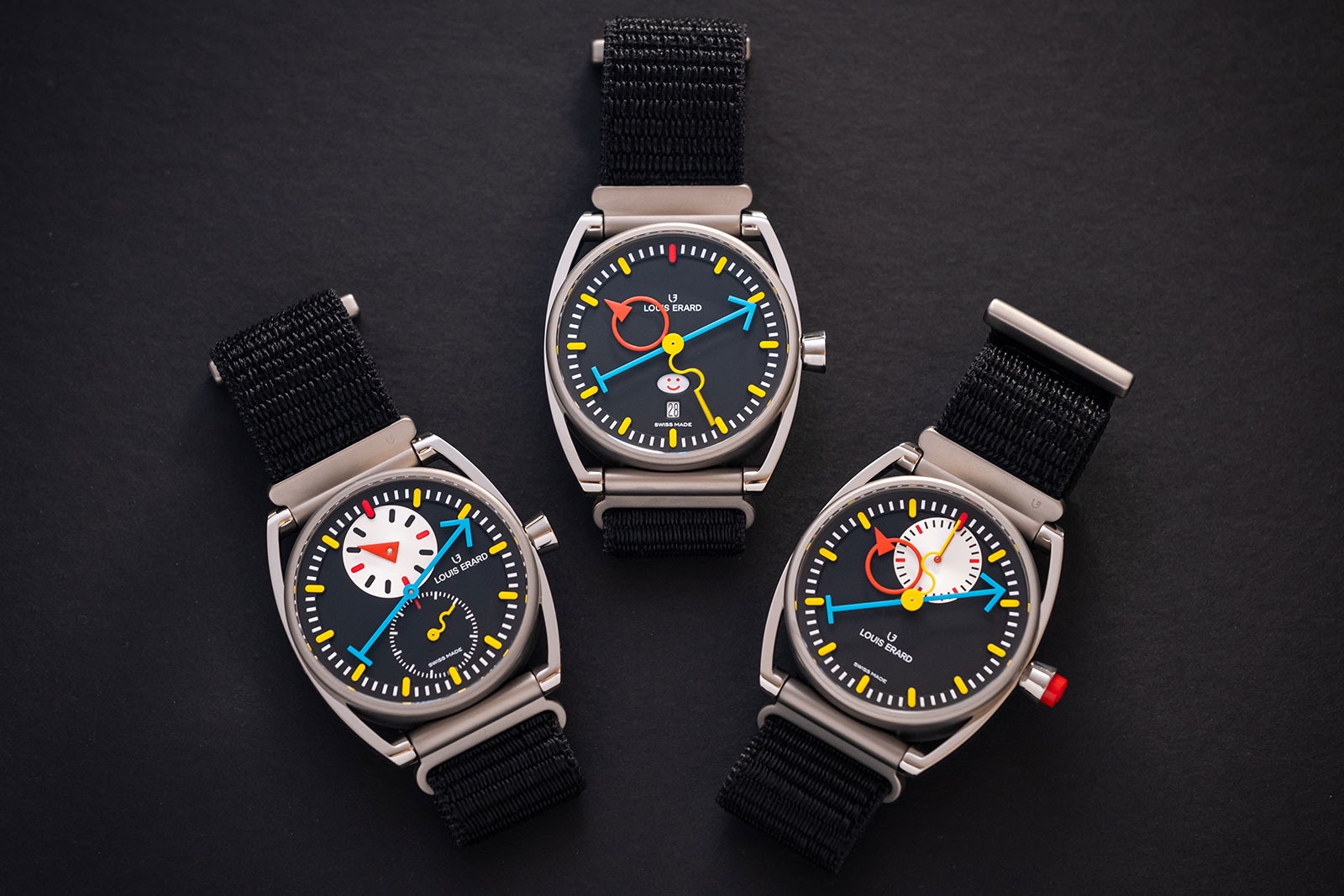 The original Triptych which includes a chrono monopusher 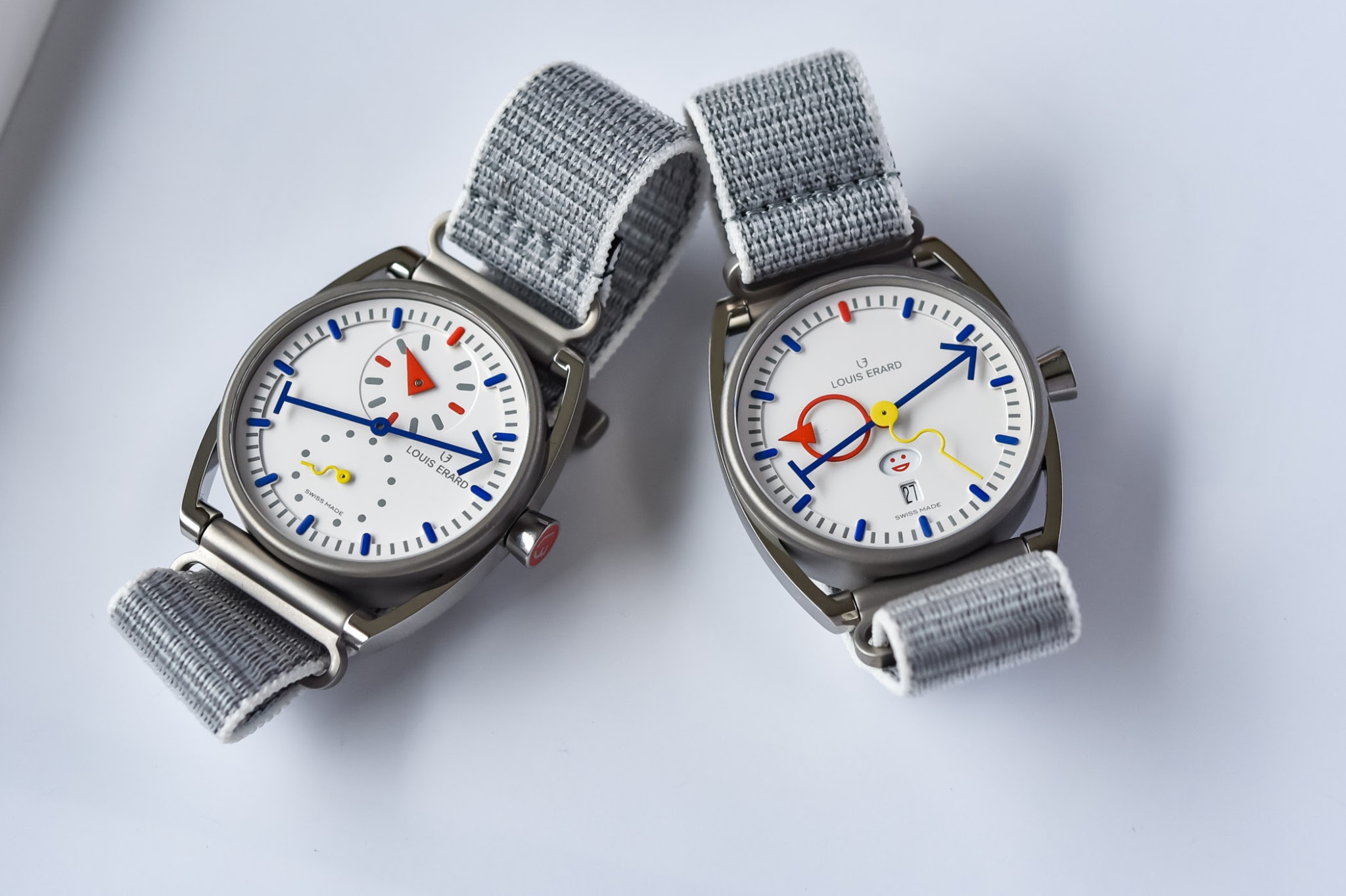 The Diptych with a white dial and light grey strap 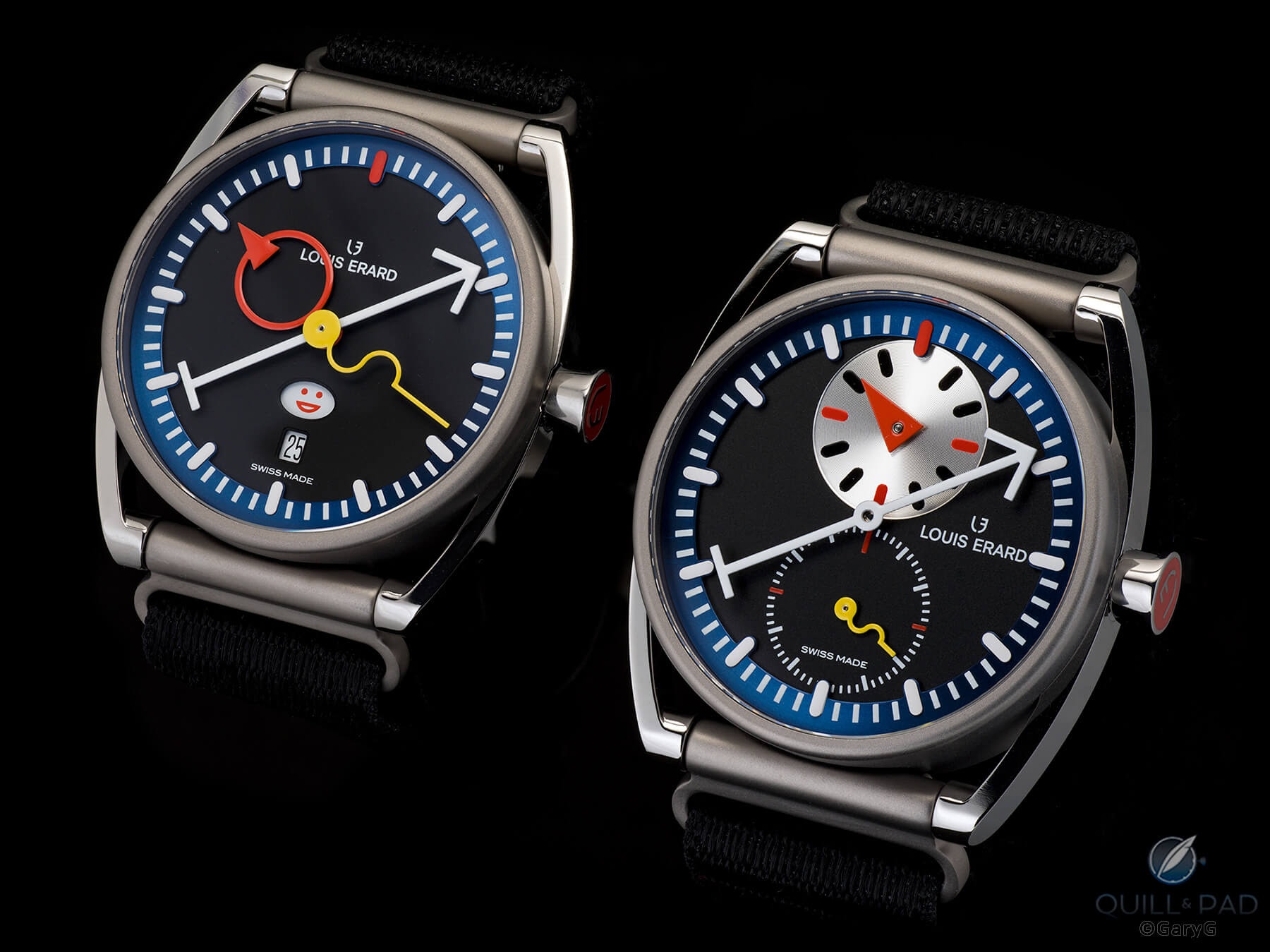 My favourite is the latest release with Stephen Silver 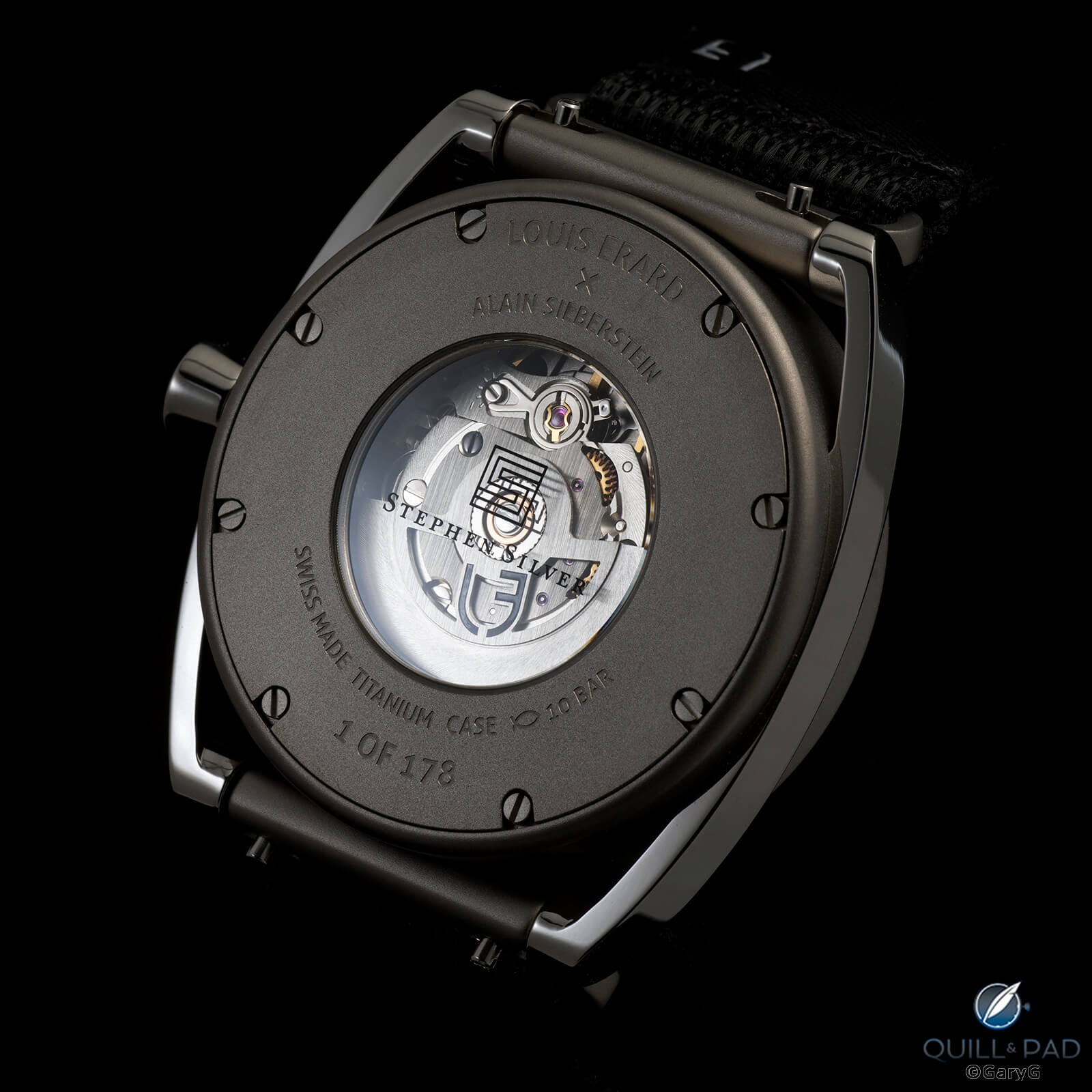 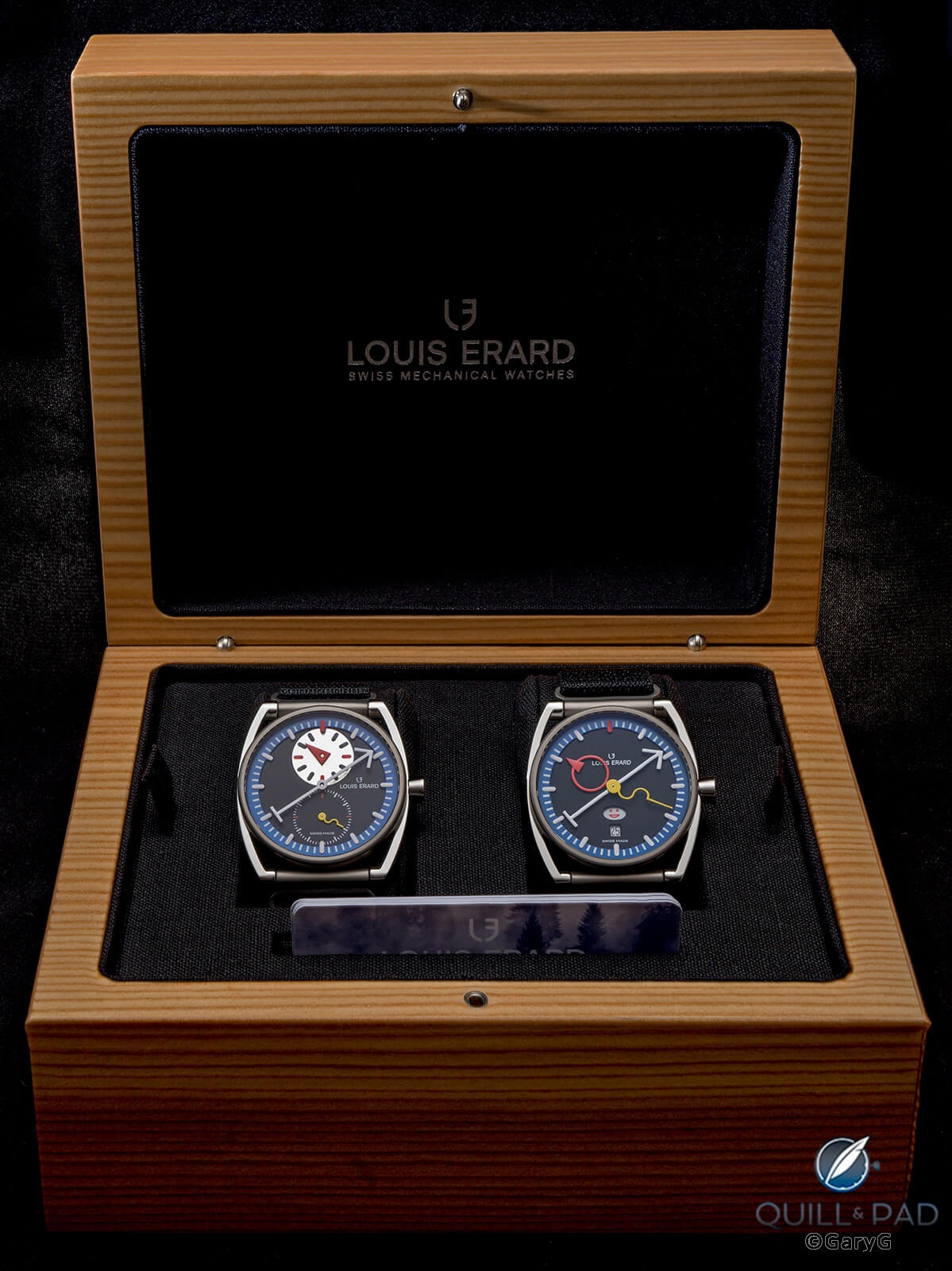 The box set that I have ordered

By: sham1 : November 22nd, 2022-13:01
Lately one could argue that there has been an overdose of collaborations, none more so that the Louis Erard Alain Silberstein watches which have a character of their own thanks to Silberstein's input but when one is promised a limited edition of 178 piece...
login to reply

I did not realize they had released others. I like them, and have been trying to locate a specific original Silberstein for a while not so maybe one of these could suffice.

By: sham1 : November 22nd, 2022-13:11
There had been little coverage on the Stephen Silver release last week except on Quill and Pad. I believe due to the limited coverage, the watches are still available so I hope you manage to source one (or two!)
login to reply

I saw these news a couple of days ago. Love the one on the bottom left ( first photo ). Congrats, my friend. Eye catching and fun additions.

By: sham1 : November 22nd, 2022-13:15
I have always been a fan of the Regulator but this time the only way of accessing one was to buy the box set so I thought why not?!
login to reply

Congrats my friend, a great and fun collaboration.

Thank you very much my friend!

By: sham1 : November 22nd, 2022-15:20
It has become one of the few accessible limited editions as many tend to be sold out these days when announced.
login to reply

By: sham1 : November 22nd, 2022-16:04
I had the chrono monopusher from the original release and was ok with the winding crown but it lacked the feel of a proper crown.
login to reply

I'm far from a fan of watch collaborations, but there's no doubt LE is being really successful in this sense, also due to the market segment it sensibly targets....All these joint works with AS are fun, good looking, and unmistakable! ;-) Enjoy.

By: sham1 : November 22nd, 2022-17:06
I think the brand awareness for Louis Erard has improved since its collaborations with Vianney Halter and Alain Silberstein. Some brands are not so suited for collaborations as it may dilute the exclusitivity of the brand. Now we also see some brands work...
login to reply

By: patrick_y : November 22nd, 2022-20:23
Back in 2015 or 2016, the jewelry store graciously invited me to an MB&F cocktail party and a seated dinner; then two hours prior to the start I got a phone call asking me if it was okay if I gave up my seat for the dinner and only come to the cocktail to...
login to reply

Patrick, I am lost for words!

By: sham1 : November 23rd, 2022-02:44
I am shocked and horrified at anyone let alone you being treated in such a manner. The watch industry is not just about the product but also, the after sales service experience. To be honest, if I had known that you had this horrid experience, I would not...
login to reply

Good service is indeed very hard to come by...

By: patrick_y : November 23rd, 2022-03:46
A true rarity in this world. Your sought-after car story makes me want to move to Malaysia! Unfortunately, here in California, especially the Silicon Valley, there's so much money (a lot of it is very new money), and a younger/inexperienced clientele base...
login to reply

Patrick, you are a very patent and forgiving person

By: sham1 : November 23rd, 2022-03:57
I would have written a letter of complain to the top management at Stephen Silver to tell them of your experience. Every member of staff in a company irrespective of their position represents the company they work for. Anything they say would reflect on t...
login to reply

I believe the top management owner

By: sham1 : November 23rd, 2022-06:06
of the company will be quite appalled at the service you received. You would be doing them a favour.
login to reply

Thank you for your feedback!

By: sham1 : November 24th, 2022-04:09
I think they are lovely too. Most importantly the titanium case, NATO strap and the dimensions of the watches make them very wearable. Not quite a world class movement but one buys these watches for the dials and fun factor. The case construction is actua...
login to reply