Thanks to the kindness of another member, I have received more information! I will be documenting this particular watch on my blog, as I have also done for some other oddballs in my collection (the Büren Calibre 82 and Junghans Mega 1) for others to learn as well.

First, it appears that this watch is much more rare than I anticipated. Perhaps only a few dozen were made by CvdK before he retired in 2009. The prototype appeared at BASEL 95 but did not go on sale until the next year, switching from a 2892 to a 2824 in the mean time. The originals had "hinged" strap attachment that caused issues (rattling I guess) and conventional lugs were adopted. CvdK appears to have some issues sourcing cases as well, so some examples have straight lugs instead of my scrolled/screwed lugs.
Technically this is a "Mk II" model, with the MK I being a smaller ladies model and the Mk III being a 7750 chronograph. According to one document, just 3 Mk I, 10-12 Mk II, and and 15 Mk III Satellite du Monde watches were produced, all around 2000. Mine is number 39, so it is perhaps a later example in this very small series!
At some point, CvdK offered highly decorated movements with guilloche by Jochen Benzinger as an extra-cost option. My watch has one such movement, and it is indeed elaborately decorated! I love his work, and this is an unexpected bonus! And the rotor features the old Klaauw logo not the new "sun".
Shortly before he retired, CvdK again offered this model. It was now known as the CK4 and included a date above 6:00 on the dial. They may have been produced in greater numbers, since I see a few more of these around the Internet. Or it could be that people just took more photos in 2008!
I was also provided with a copy of the (one page) manual. The "quick set" of the moon indication is quite complex and I never would have guessed how to do it, as it requires a "gentle tap" on the case! I will document this on my blog once I figure it out... But it does include the tidbit that the moon indicator makes one rotation around the dial every 24.84210526 hours, compared to the obvious 24 hours for the sun. I suppose this would technically be a synodic calendar?
Thanks again everyone! 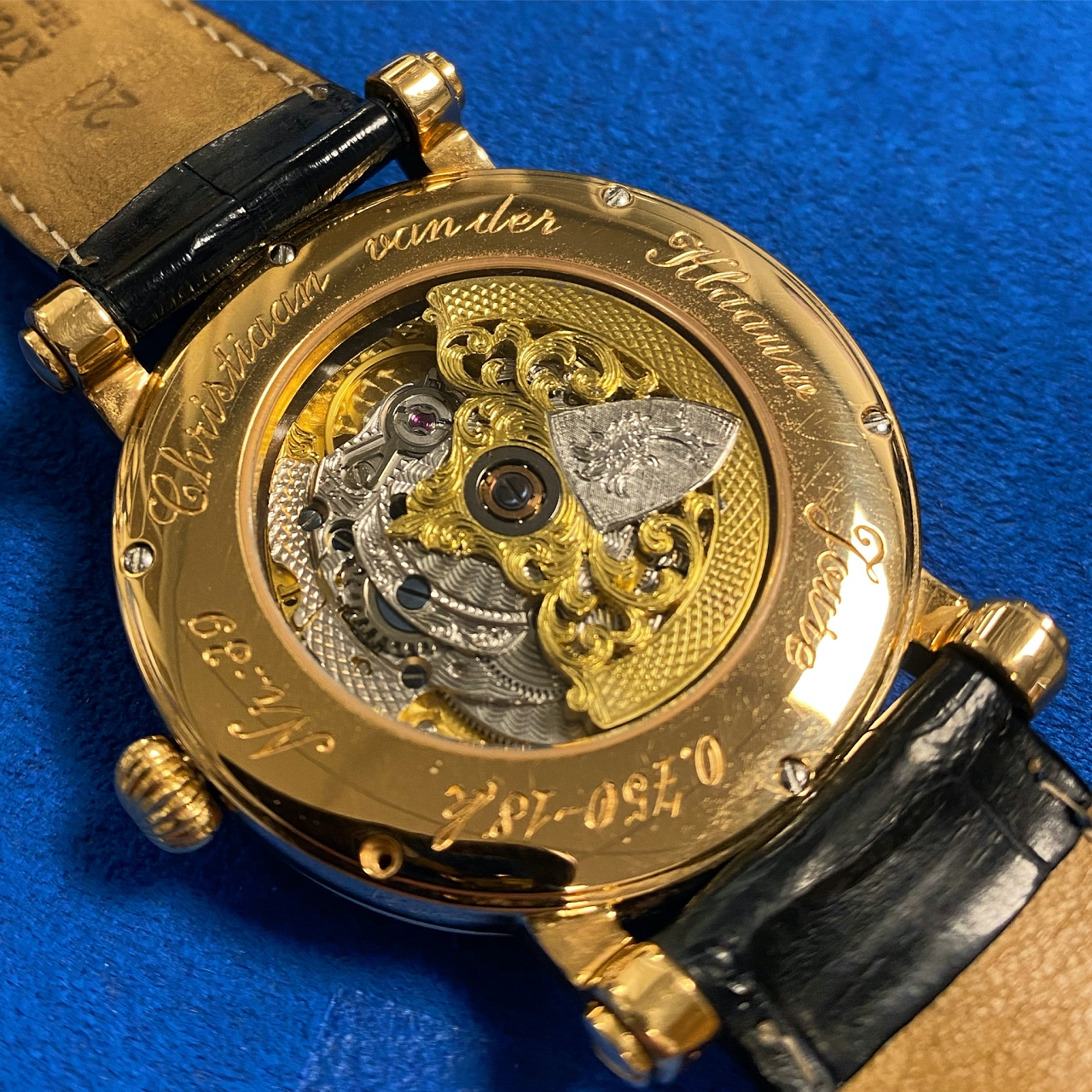 By: Grail-Watch : January 13th, 2021-11:01
I just opened a FedEx box from Bonhams auction house containing this lovely watch. Its my first AHCI piece. I am a sucker for a world timer! It was the first Klaauw complication back in 1996 though this one is from a later reissue series. The case is incr...
login to reply

Congratulations, a beautiful work of art as your first indie, and of course one of the most fascinating complications! Enjoy thoroughly once it's back from the spa!🥂

The second model of the 'Satellite du Monde'

By: Geo : January 13th, 2021-11:37
Fantastic watch by such a great watch maker. His ideas were absolutely amazing. George
login to reply

The first model was slightly larger and had a date, different caliber and another dial.

By: Grail-Watch : January 13th, 2021-13:15
I found that same image in Europa Star's archives but yours is a better image. There are also later models that look quite different. Here's a look at a later model. This scroll lug case appears around 2000 from the looks of it. I wish there was paperwork...
login to reply

Yes, but these later models are made by the new owners

By: Geo : January 13th, 2021-23:18
of the Christiaan van der Klaauw brand. Yours and the other one we discussed are pure Christiaan's own creations. I am not saying anything negative about the new ones, I think the brand does extremely well, when it comes to new models. George
login to reply

By: Watchonthewrist : January 13th, 2021-12:26
CvdK is where my independent journey started 18 years ago . I have met him many times (also the previous owners) and i am a fan of the brand . If there is anything you want to know or need help just let me know 🤗. My CvdKs says hi ...
login to reply

I wish I could find the manual!

By: Grail-Watch : January 13th, 2021-13:17
I have no idea how to set the moon correctly. I do see that if I advance the time (a lot!) the moon changes position relative to the sun. Is there supposed to be a quickset in position 1? If you're in the USA, is there a watchmaker who knows these watches...
login to reply

I especially appreciate the globe!

Its beautiful my friend , better contact them by mail and ask for a manual.

Congratulations! Where is the official..

I got curious about this point, as I understand having a service center handy might be an obvious concern. As far as I can see, the official CvdK site doesn't mention any service centers...

By: FabR : January 13th, 2021-16:56
However, you might be very lucky since their only authorized dealer in all of North America seems quite close to you, in Perrysburg: If you give them a call or even drop by, I would guess (without knowing them) that they'll be happy to assist you, as the...
login to reply

Funny thing about that dealer

Ouch, that IS funny! Not sure how to interpret this choice by CvdK (I bet many jewelers would have been happy to sell their watches)...though this way you might become the first person I've heard of to get a free suit with his next watch purchase! ;-))

RGM is relatively close to me, so..

Have you visited their website for a manual and service?

Yes they have manuals

By: sham1 : January 13th, 2021-15:18
I follow many auctions but did not add Bonhams to my list or else we would have been bidding against each other! I shall add this watch to my hit list for the future. Well done on your superb acquisition!
login to reply

I’m glad you didn’t bid against me

By: sham1 : January 14th, 2021-17:47
for a 40mm watch. But the weight is less good even though I know many purists like their watches to have some heft. I like mine super light!
login to reply

I will call CvdK soon!

Another watch I didn't know. Excellent combination of complications. I wish the service won't be too long and costly... Bravo, my friend, bravo.

Thank you my friend!

A very cool watch and love the little center dial.

By: darmatgre-1 : January 14th, 2021-10:47
I really like the model you selected, more than the original one with the date. Amazing watch and cool complication. RGM is probably a good choice to service it, as they can generally handle anything. Look forward to seeing more scans of this one. Darren
login to reply

By: Grail-Watch : January 14th, 2021-11:00
Thanks to the kindness of another member, I have received more information! I will be documenting this particular watch on my blog, as I have also done for some other oddballs in my collection (the Büren Calibre 82 and Junghans Mega 1) for others to learn...
login to reply

By: Grail-Watch : January 19th, 2021-17:51
I have been in contact with the company in the Netherlands and plan to send it to them instead of RGM as originally planned. It seems that the lunar calendar in module is more complex and troublesome than I expected, so I think it’s best to trust it to th...
login to reply