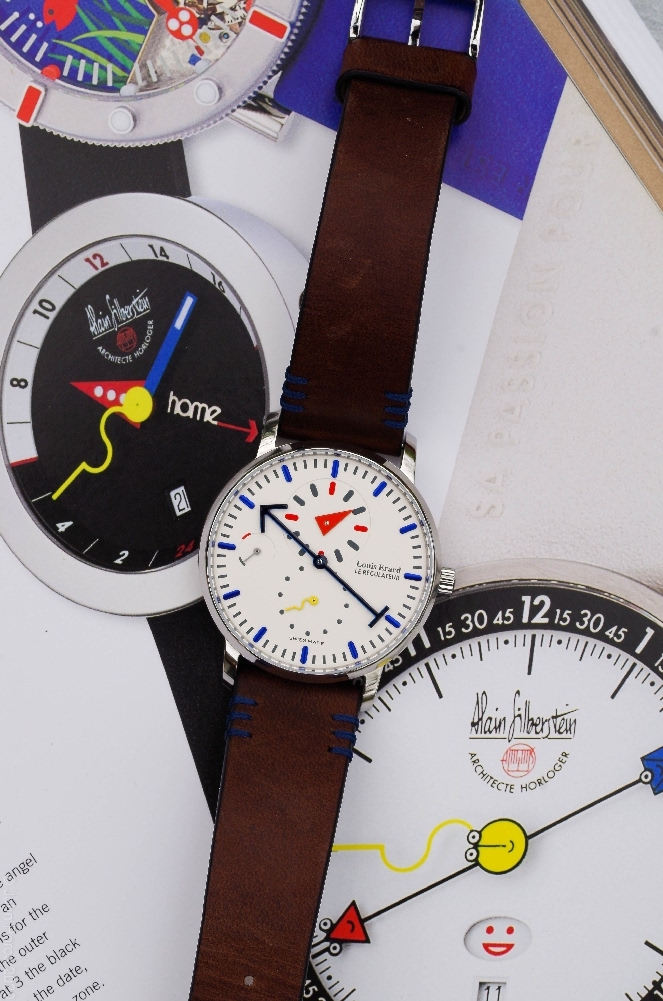 I had been searching for the right Alain Silberstein vintage piece for a while. (Unfortunately, his company, La Fabriqué de Besançon S.A., which started around his kitchen table in 1986, ended in 2012). If you have hunted for Silberstein pieces, you understand that the production is vast and wide. Silberstein created quartz watches with cheeky sayings on the dial as well as tourbillions and mechanical perpetual calendar watches in collaboration with horological legends Svend Anderson, Vincent Calabrese and Frank Muller as well as everything in between. Although there are still many vintage pieces available, I always stopped short of acquiring. For me, in collecting independent producers like Silberstein, there is always the issue of who is willing to service these watches in the future.

Most fortunately for me, Silberstein is still creating. He has continued to collaborate with various maisons, creating watches with Romain Jerome in 2015 and MB&F in 2009, and again in 2016. His latest collaboration is with Louis Erard, a turn of the century brand relaunched in 2003. Louis Erard has of late begun to work with famous watch designers such as Eric Giroud and Silberstein to create special editions of their watches. The special edition I have and will talk about is the Louis Erard x Alain Silberstein Regulator.

The Watch as Dial

The Louis Erard x Alain Silberstein (LE x AS) Regulator is based upon Louis Erard’s Excellence collection and in particular, their Regulator model. In fact, the case of the LE x AS is identical to their standard regulator. Many of the Erard regulator models do have a closed case back, but some have an exhibition caseback like the LE x AS. The innovation of this watch is not in the case but in the dial.

While, of course, following the movement geometry of the standard Louis Erard Excellence Regulator, Silberstein has used a consistent vocabulary for hands and dial indices of the LE x AS from his previous horological work. 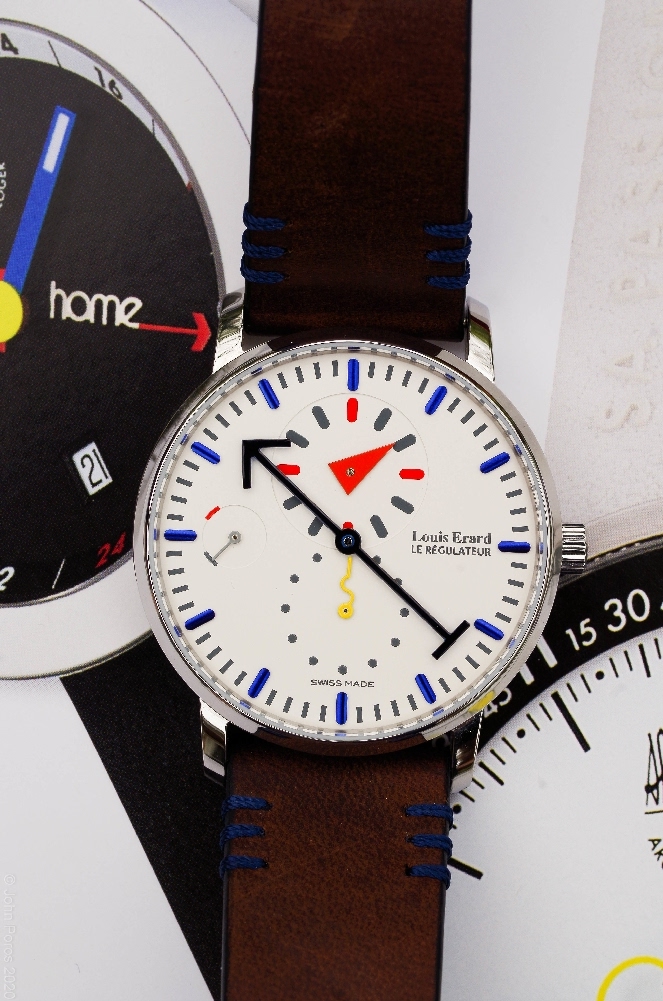 First is the hour hand. The red, triangular hand has been used by Silberstein almost exclusively in his past work to indicate hours. In his Arkitek, Krono, Rondo and many other series we see the red triangular hour hand. These previous iterations, however, include three small dots in a line on the hand. With the use of this hour hand in a subdial, the inclusion of these dots would be too small of a motif and would busy up the dial. This simple red triangle in the LE x AS is just right. 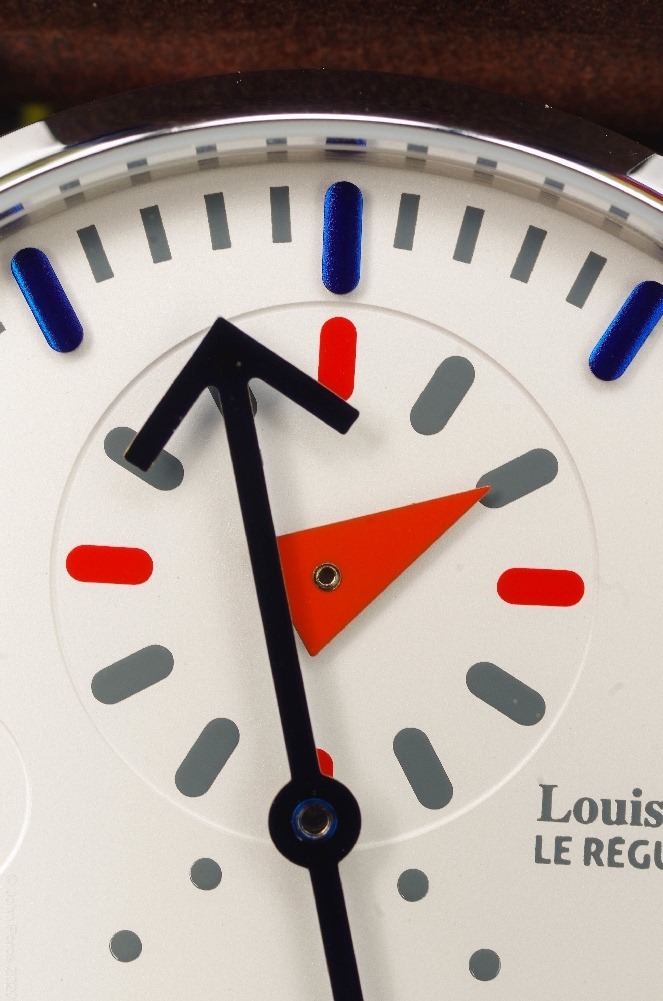 The second hand also has roots in Silberstein’s previous work. The yellow serpentine hand is consistently used to indicate seconds by Silberstein. 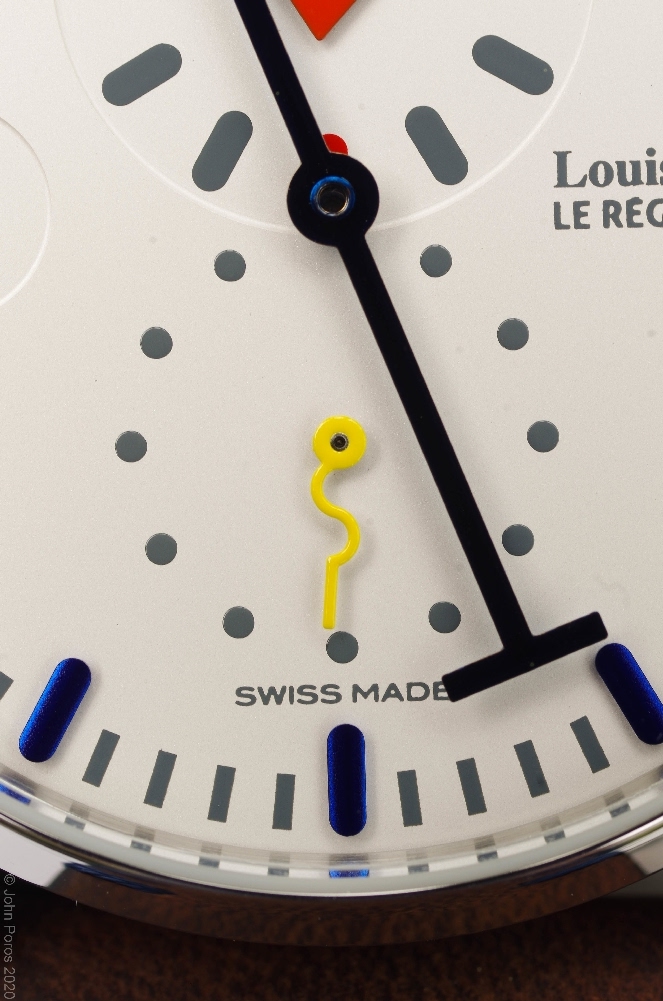 The use of a power reserve indicator is not very common to Silberstein’s previous work, although integral to the Louis Erard’s movement. This is a simple yet effective stick indicator. 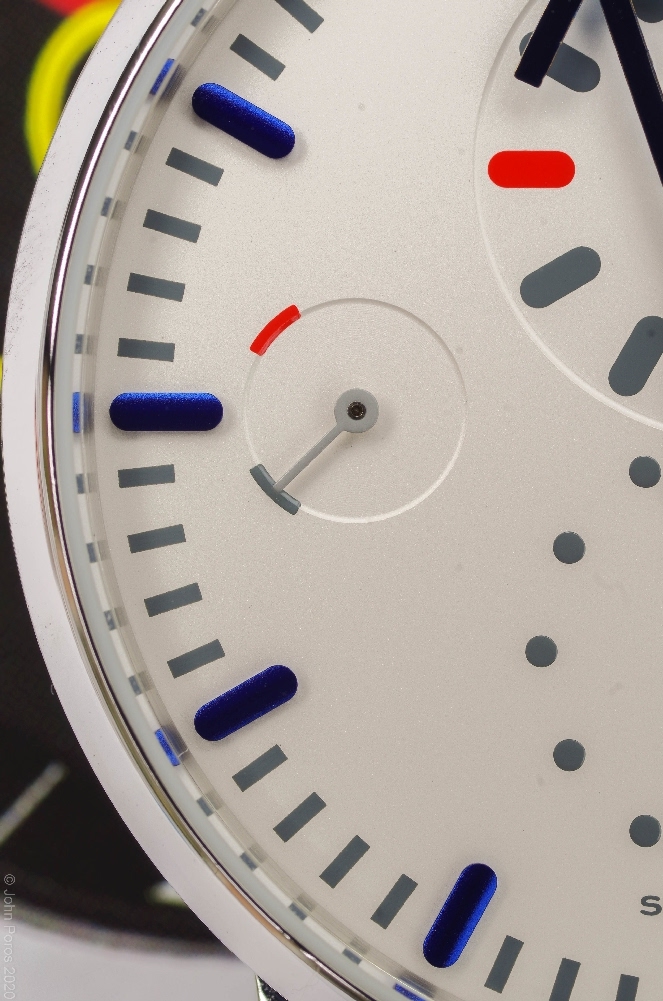 The star of the dial is the large minute hand. The only hand close to this in Silberstein’s previous work is the hand for the Piko Titane, a one handed watch with Smiley face day and date. Even so, the playfulness of the Piko Titane hand is very different from the majestic scale of this minute hand of the LE x AS. The open arrow and seraph end span across the entire dial, putting all of one’s attention to the passage of the minutes. 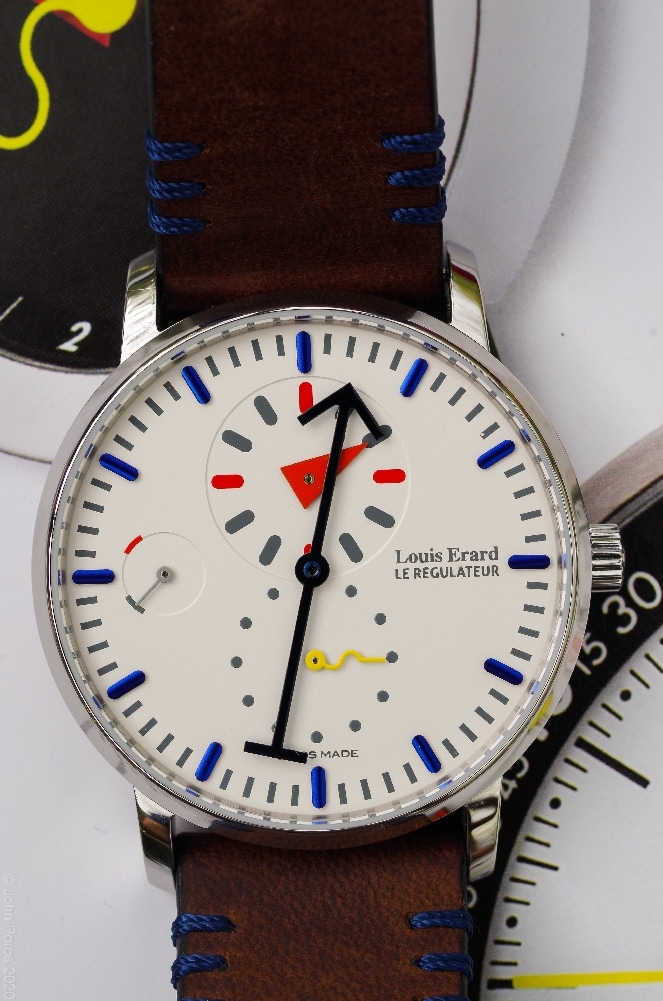 The indices on the dial may have some precedent in other Silberstein watches such as the hour subdial of the Bolido chronograph for the seconds subdial here, but the gray indices seem an original way to subdue what could become a very busy element with all of the color and form of this dial.

So where is the Louis Erard in this dial? The answer is the blue of the minute hand and minute track indices. The hands of Louis Erard watches are inspired by the “blue hour”, where the sky turns a deep blue soon after the sun sets. While these hands are not traditionally blued, i.e. heated steel to turn blue, they have a blue that changes from dark to light in the sunlight, completing the primary color dial.

While the case is that of a standard Excellence Regulator, there is a detail of the case that works rather well with the LE x AS concept. The lyre shaped lugs of the case offer a bit of whimsy in character with the dial. 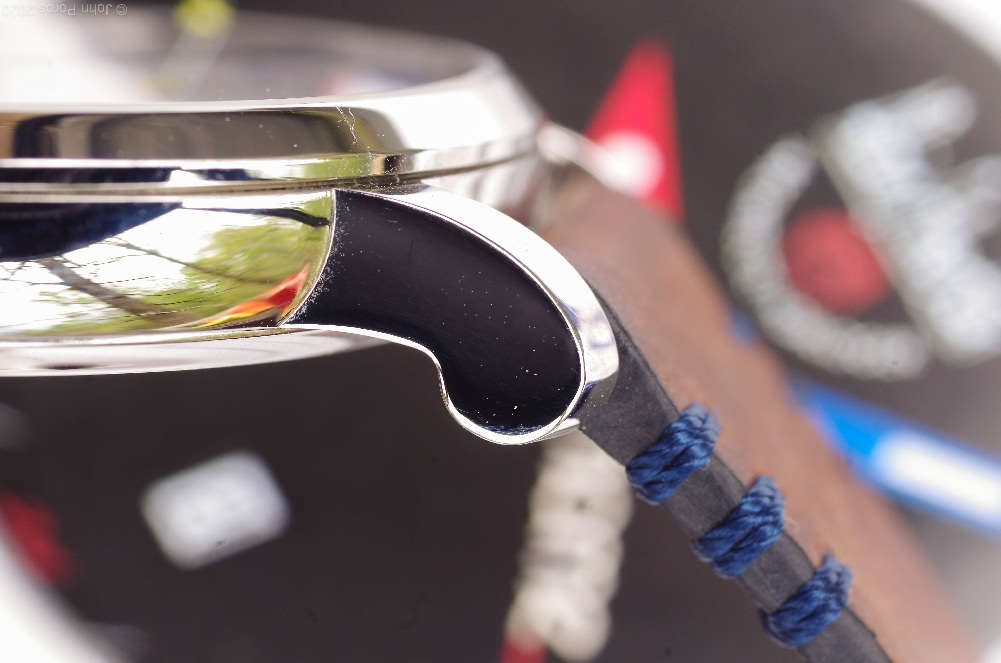 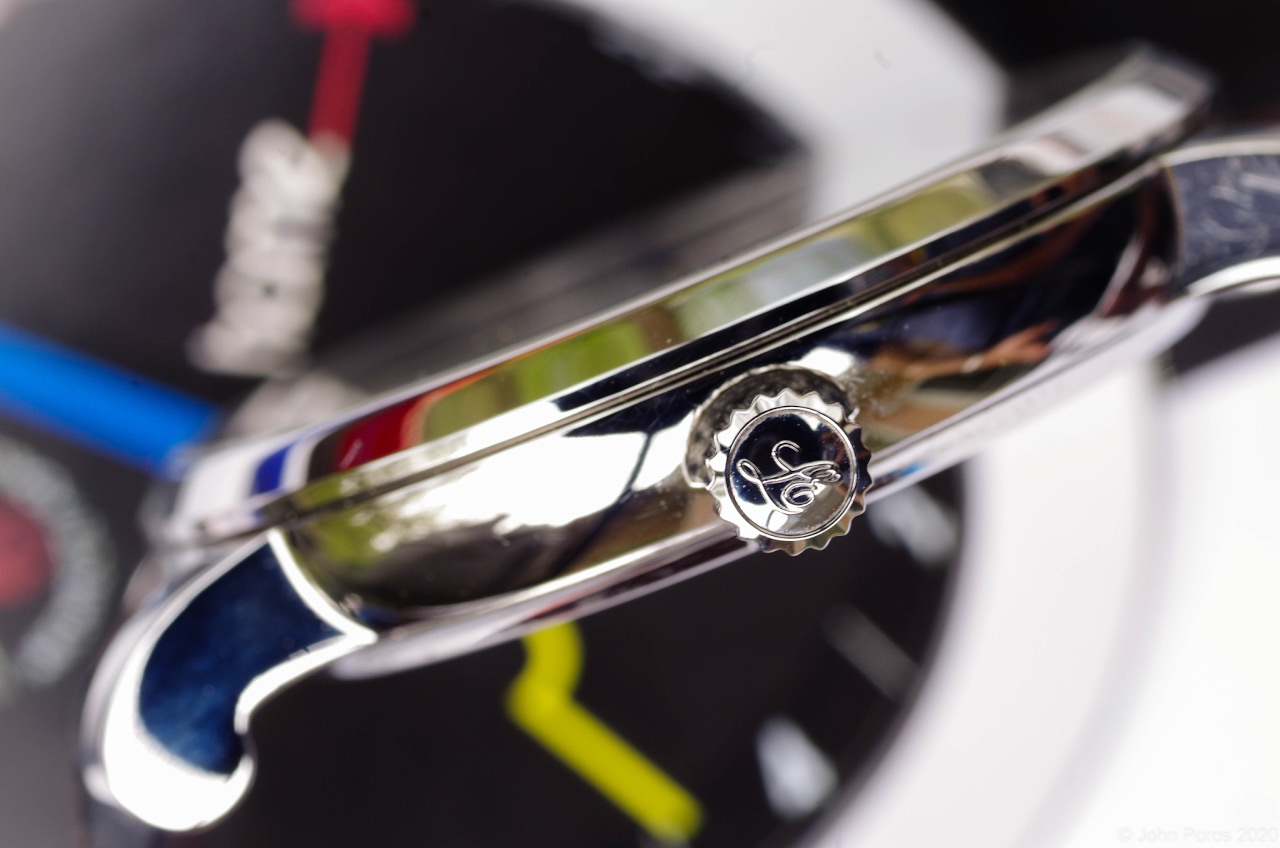 The strap was a bit mysterious to me until I saw the strap of the MB&F LM1 Silberstein. The LM1 strap has two rows of contrasting threads at the lugs to hold the leather folded over to hold the spring bar. The LE x AS strap has three rows of threads both at the lugs and the buckle, but they appear to be decorative rather than functional, but maybe not because the keeper is tied together with a thread. In either case, a nice rubber lining is provided on the interior of the strap and hides any knots.

Case back and movement

The case back shows off the Perseux 7001 base movement of the watch. Much smaller than the 40mm diameter of the case, the case back has a wide ring to try to hide this fact. One could imagine as an alternative a large pocket watch movement with an equally large balance wheel beating at 18,800 bph. A large balance wheel would certainly be a wonderful companion to the big, beautiful minute hand on the dial. There are a number of watches with ETA 6498 movements at this price range, but with more simple complications. Nonetheless, this was a minor point for me compared to the incredible dial. 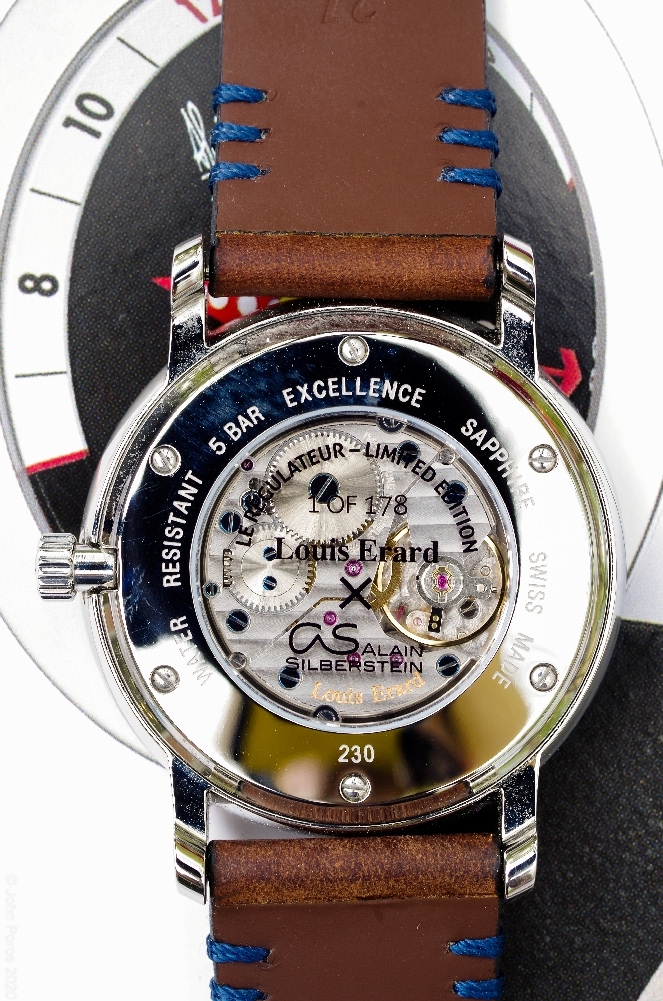 On the wrist, the watch seems to wear larger than 40mm due to its thin bezel. The lyre lugs dip down so I can imagine someone with a smaller wrist circumference than mine (18 cm/7 inches) would still be able to wear the watch. The height of the watch fits easily under a sleeve and the strap is very comfortable. I think that this watch is quite versatile; despite the bold graphic nature of the dial, I have worn the LE x AS with both suits and jeans and been quite pleased. 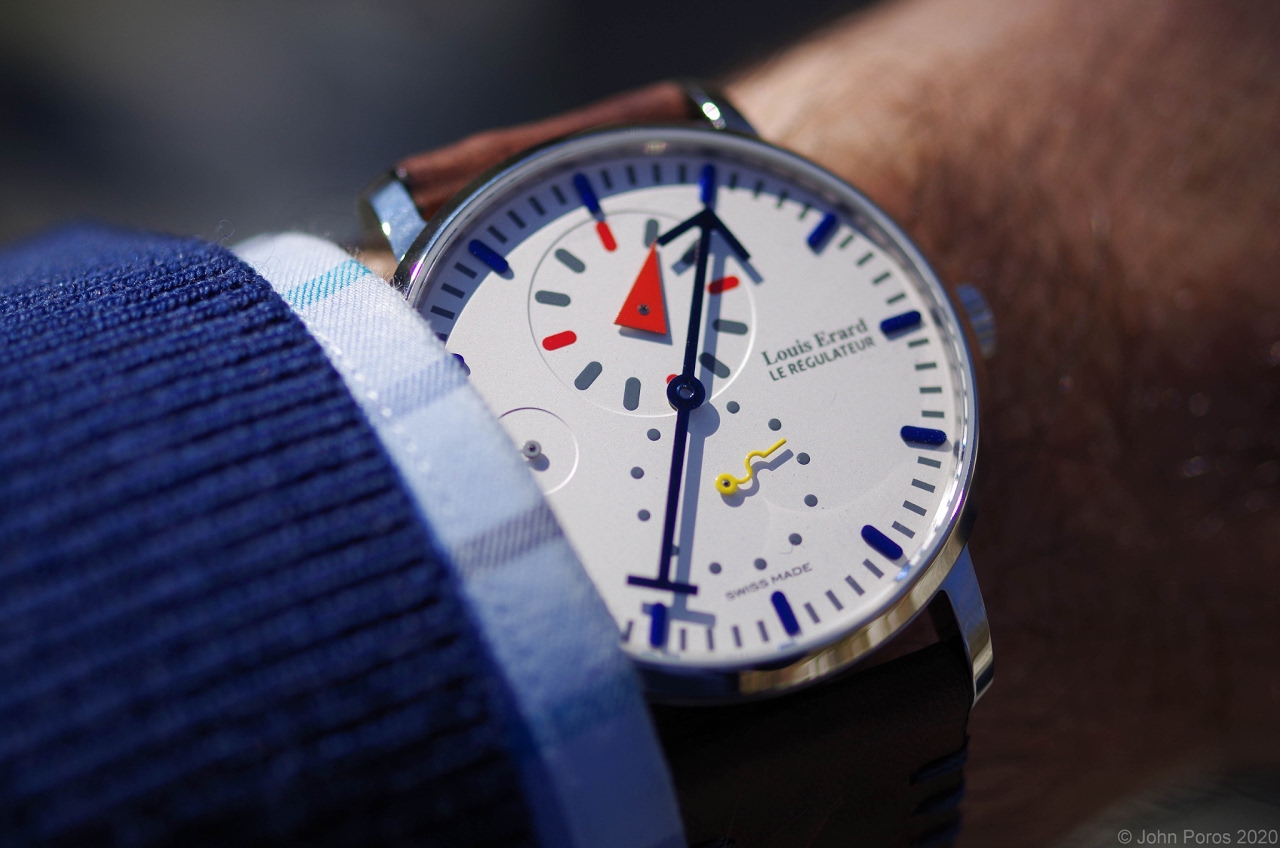 Thoughts of a Collector

This watch came just in time for me. Given the other watches in my collection, a Silberstein was a logical step. However, the issue of servicing and also the fact that many of the Silberstein pieces are so over the top (Don’t believe me, do a search) made me hold off. With the LE x AS, the attraction was a Silberstein designed watch with an interesting complication, a bit more restraint, and service to back up the watch. I am, as they say, a happy camper.

Much obligation goes to Michael Clerizo’s Masters of Contemporary Watchmaking as a reference.

By: jporos : March 22nd, 2020-18:59
I had been searching for the right Alain Silberstein vintage piece for a while. (Unfortunately, his company, La Fabriqué de Besançon S.A., which started around his kitchen table in 1986, ended in 2012). If you have hunted for Silberstein pieces, you under...
login to reply

Thanks John for this knowledgeable and beautifully written review of a great piece by "Architecte Horloger" A. Silberstein! ;-)

By: FabR : March 22nd, 2020-19:46
I do actually share a fascination for AS's dials, including those more "over the top", and wouldn't mind to acquire one, one day (save your same reservations on serviceability, which I'm sure the more mainstream "co-authorship" will reasonably solve in th...
login to reply

By: jporos : March 22nd, 2020-20:26
The watchmaker I regularly use, Jacques, has become very picky about what he works on. I have a LIP that I love with an old Durowe caliber, but am wondering where in the world will I find someone to service it. Maybe I just need a new watchmaker... I do l...
login to reply

A playground on the wrist. How can this not put a smile on anyone's face :-) (nt)

Thanks for this very good review of a very interesting watch.

By: amanico : March 23rd, 2020-01:00
This Louis Erard is a rat of youth, freshness, originality and somehow of madness, too. I see it as a witness or a reminder of something we should never forget: the child in us. That's for the youth, the freshness and the madness. And we don't see many re...
login to reply

By: jporos : March 23rd, 2020-07:29
I think the fact that Louis Erard makes their own regulator module is the difference. In the video on their website, you can see a watchmaker at Louis Erard lay a dial on top of a movement and see just how much bigger the dial is.
login to reply

Thanks for the detailed overview .. Iam anxiously waiting for my two pieces which I ordered last year... [nt]

Hope you get them soon, Horology75...

excellent review. Like you I have been a Silberstein fan for quite some time but

By: alex : March 23rd, 2020-03:42
never owned one of his original pieces. Pulled the trigger on the black dial version of this late last year and wear it with great pleasure.
login to reply

By: cazalea : March 23rd, 2020-06:51
On Monday morning setting: Thanks for this review. I too had a Louis Erard on order, but a combination of circumstances made me step back and let it go to another enthusiast (such as having multiple Silberstein watches already). My biggest worry is not se...
login to reply

By: jporos : March 23rd, 2020-07:35
in particular because I would probbably need the socket wrench to wind the triangular crown. Thanks Cazalea, your posts and Foversta's posts were the ones that led me to Alain Silberstein.
login to reply

It looks gentle enough in the photos

Lovely write up. Thanks John.

Unfortunately, this edition is sold out...

By: jporos : March 25th, 2020-07:08
but I read there may be a new collaboration in the future. I think it is very hard to keep Alain Silberstein down.
login to reply

I read that Louis Erard and Silberstein...

I will keep my eyes open, thanks! [nt]