Hands on review of the Voutilainen Vingt-8 SC (28SC)

Nov 21, 2020,04:28 AM
Kari Voutilainen's 28SC (central second) has just won the men's watch prize at the last edition of the Geneva Watchmaking Grand Prix. I had the opportunity to see it a few weeks ago during the Geneva Watch Days and I was very impressed by it. I can therefore understand the jury's choice.
It is obviously not the most surprising watch of the year. The Voutilainen style is recognizable at first glance thanks to the main hands, the design and the numerals on the dial. However, it has one big difference compared to its predecessors, including the 28Sport: a central second. This central second is excellent news. I think it reinforces the concept of the instrument watch and it is totally coherent with Kari Voutilainen's will to follow the great tradition of low-frequency chronometric pieces with a large balance wheel. 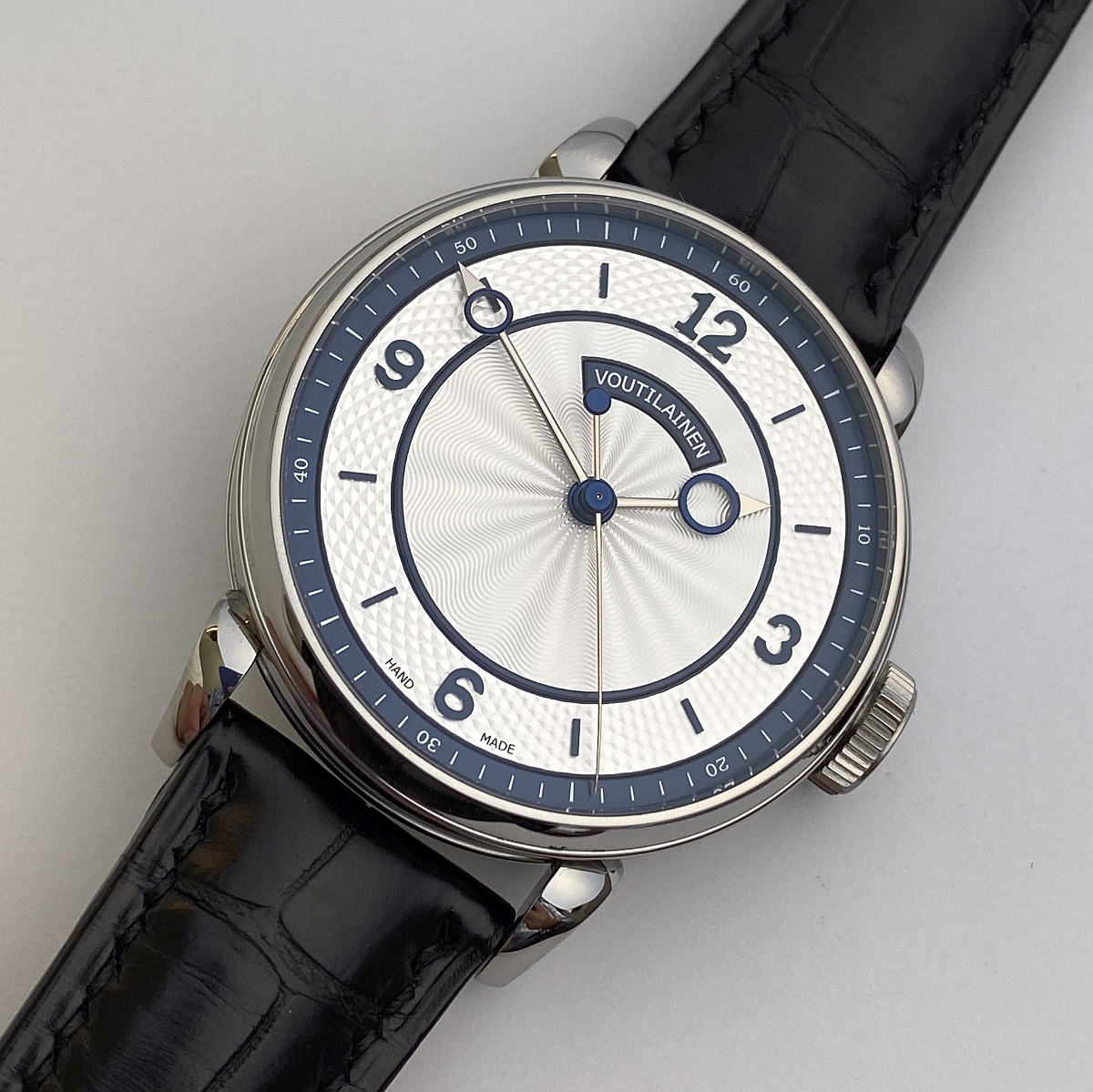 The movement that powers the 28SC is the in-house Vingt-8 caliber, which is distinguished by its specific regulating organ:
- a balance-spring using the Grossmann curve on the inside and the Philips curve on the outside,
- two escapement wheels that give a direct impulse to the balance wheel.
These technical solutions are designed to limit energy consumption and achieve a constant behavior throughout the power reserve. It is clear from the performance of the movement (a power reserve of 65 hours for a frequency of 2.5hz) that Kari Voutilainen has taken care to find the right compromise between this duration and a stable behavior. I also find that the power reserve reaches a completely satisfactory duration despite the size of the balance. Proof that energy consumption has been well controlled. 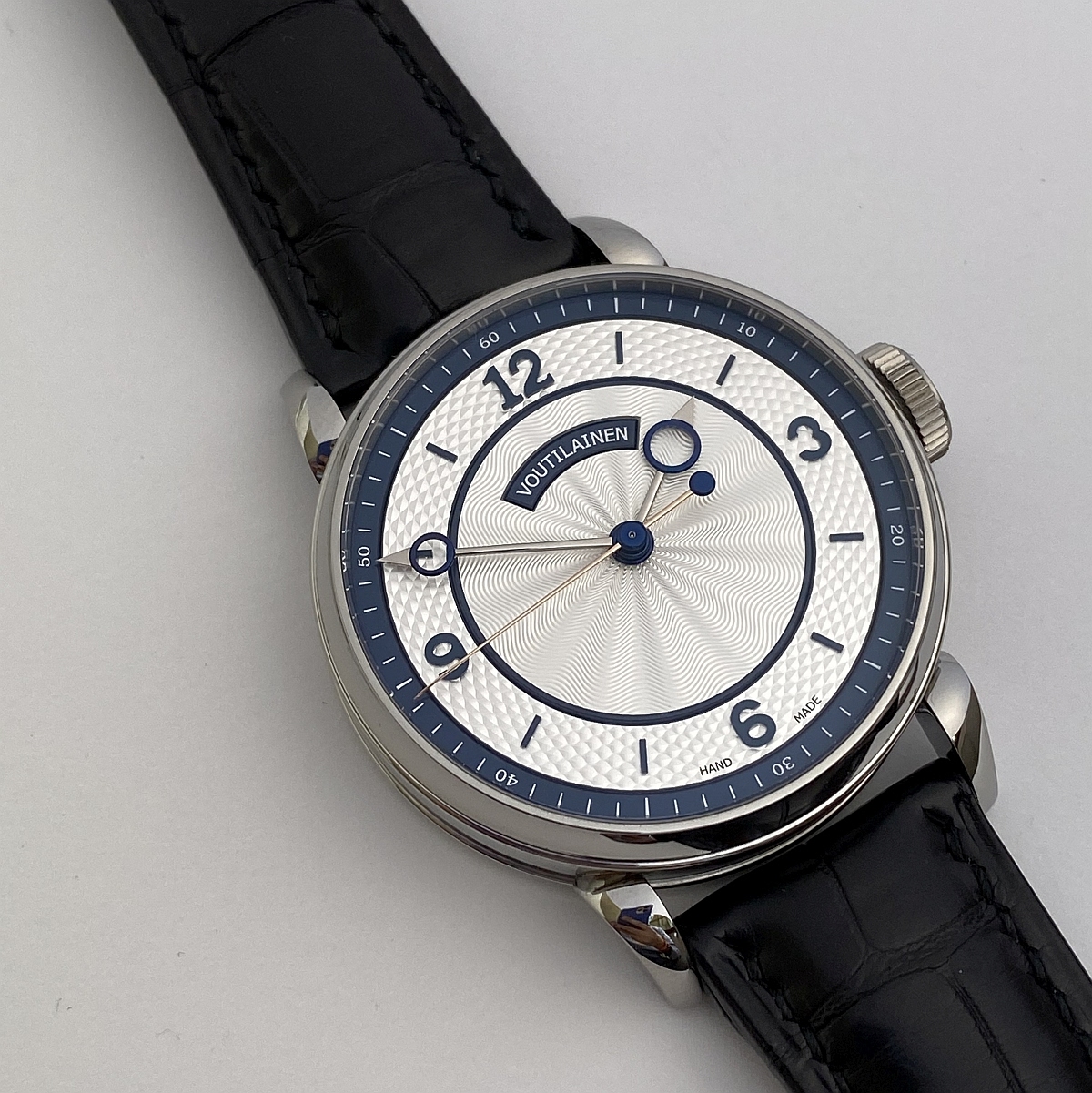 The movement is not only efficient: it is also very beautiful. First of all because of its architecture: the plate is open (if we were to take an analogy with German watchmaking, we are not with a 3/4 plate but a 1/2 plate) and the balance bridge is profiled in order to fully reveal the balance wheel. The result is spectacular considering the diameter of this balance wheel which is close to 14mm. This size makes its slow oscillations even more majestic. In addition, the movement of the 28SC has an additional bridge linked to the second central one. The location and shape of this bridge is impressive. It is inserted in the area between the edge of the plate and the contours of the crown wheel and the ratchet. Visually, the movement is perfectly organized, limpid and offers very beautiful effects of relief and depth.
Moreover, not surprisingly, the quality of the finishes is perfect: polishing of screws and steel surfaces, polishing of pinion and wheel surfaces, bevelling, circular graining, the result is perfect. The movement remains however sober in its style and it is deliberate. This finishing meets two logics: to accompany the technical finishing and to highlight the architecture of the movement. The finishing of the piece I prefer is that of the balance bridge which appears almost like a ray of light above the balance wheel. 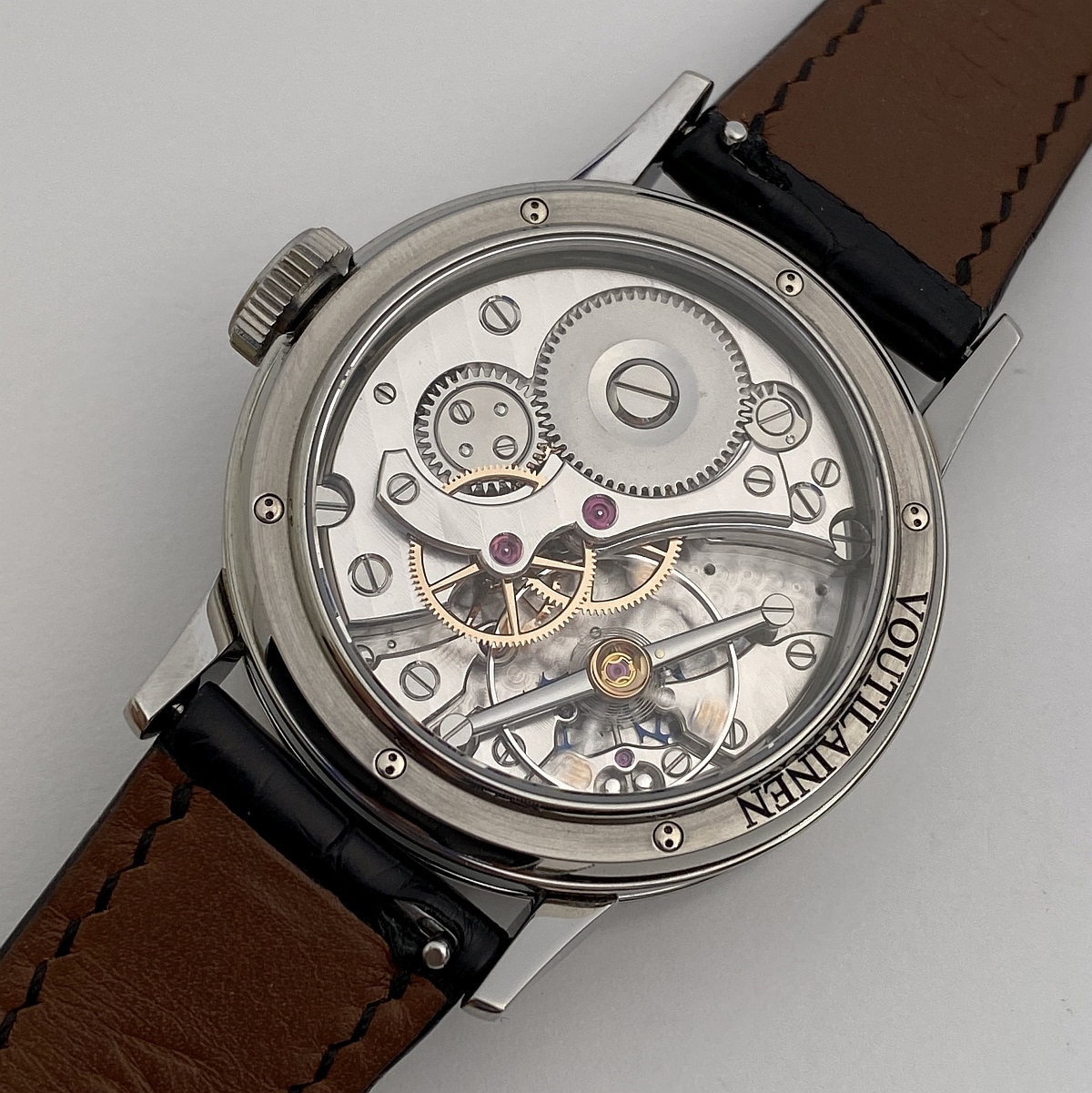 The happy owner of the watch is rewarded by this quality of workmanship. Because beyond the technical characteristics of the movement, it also offers great ease of use in daily life. Manual winding brings a great pleasure, amplified by the enlarged size of the crown, which is easy to handle. It should be noted that this crown is quite flat in order to obtain a better aesthetic integration.
The dial (manufactured by the company Comblémine  owned by Kari Voutilainen) is not to be outdone. The version of the 28SC that I saw has a silver dial with a blue flange. The light reflections are magnificent, created by the contrast between the two types of guillochage: barley grain on the hour circle and sunrays on the central zone. Of course, I find the two typical main hands, manually finished and polished. I don't forget what makes the 28SC, the central second hand, so unique. Its thinness, its length (it seems to lick the bezel) and its curved tip distinguish it from the main hands. Note the nice counterweight that makes it even easier to follow the course of the hand. As for the applied numerals and indexes, they bring relief and reinforce the perceived quality.
The titanium case is an extension of the 28Sport case with concavely redesigned lugs. This gives it a more contemporary style. Its diameter is 38.5mm and its height is 13.3mm (1.8mm higher than the usual 28Sport case due to the bridge of the second central lug). The diameter/height ratio is rather low, the watch appears a little thick for an elegant piece. But you just have to turn it upside down to understand the interest of such a height. The depth effects of the movement are striking! 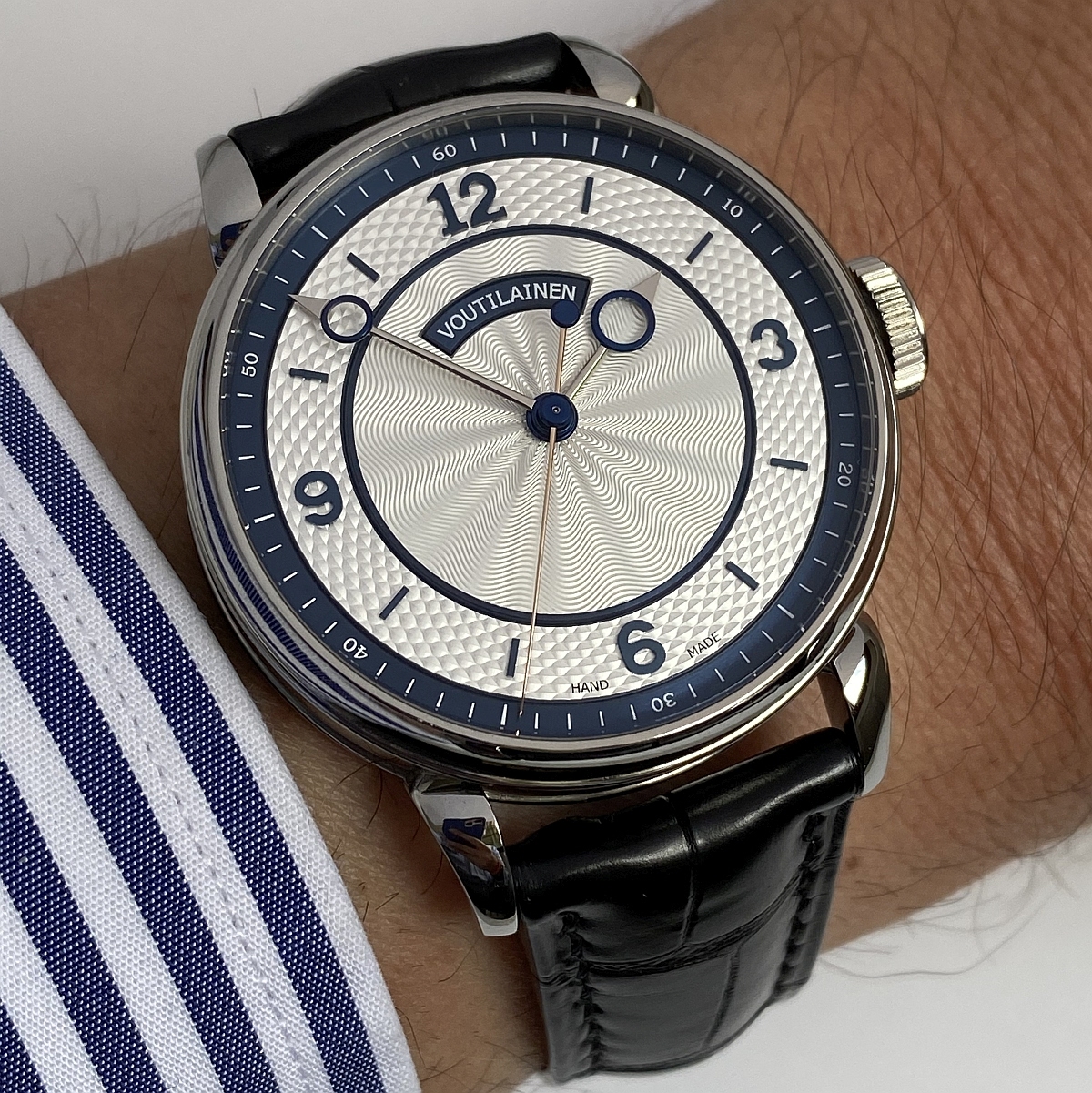 The 28SC from Kari Voutilainen is therefore an exceptional watch. It offers no great surprise compared to other models powered by the Vingt-8 movement, but the attractiveness of the central seconds and the impeccable quality of the execution make it very desirable. It represents the quintessence of what must be a traditional high-end piece with a chronometric vocation. This is why I would like such a watch to be accompanied by an operation certificate and the chronometer certification. The central second would then take all its meaning.
The 28SC is available at a price of 74,000 Swiss francs as part of a series of 10 titanium pieces. 10 pieces will also be available in steel.
Thanks to the Salon des Horlogers in Geneva.
Pros:
+ the performance and beauty of the movement
+ the appeal of the central second that beautifully animates the dial
+ the quality of the finishes
Cons:
- a slightly thick case
- it would be appropriate for the watch to be available with an operation certificate and chronometer certification

Hands on review of the Voutilainen Vingt-8 SC (28SC)

By: foversta : November 21st, 2020-04:28
Kari Voutilainen's 28SC (central second) has just won the men's watch prize at the last edition of the Geneva Watchmaking Grand Prix. I had the opportunity to see it a few weeks ago during the Geneva Watch Days and I was very impressed by it. I can theref...
login to reply

Superb. Very nice dztails on the dial. As for the movement it goes from beautiful from exquisite.

Not my favorite dial of his but if it Amazon dropped it off at my door, I'd love it. Hint. Hint.

Many thanks for this great review FX!

By: Mike H : November 21st, 2020-07:08
You actually covered almost everything: the movement (aesthetics and some interesting horological details), the dial, the case... Perfect explanations neither too long nor too short, pure pleasure to read . I would add only one comment which probably rela...
login to reply

Great review and exceptional watch even though I prefer the small seconds. Congrats to Kari for another prize and great showing in Geneva

Such a amazing and beautiful KV .

Thanks for the review FX

Thank for the fine review. If I were working..