Hands on review of the McGonigle Tuscar Banu in white gold

Mar 03, 2020,14:17 PM
I couldn't go to Dublin without saying hello to Stephen McGonigle. And I was very lucky: he was in Ireland during my visit and not in his workshop in Switzerland. I met Stephen and his brother John for the first time in Paris at the Salon Belles Montres in 2008, two years after the founding of the McGonigle Watches brand. I am very nostalgic for those good times when the Parisian salon was a big event and the only one truly dedicated to end customers. And what an impressive set of participants! All the main independent watchmakers were present, including the McGonigle brothers who presented their first Tourbillon watch developed at the time based on a Claret caliber. I loved this watch, its aesthetics, the shape of its tourbillon bridge, the hands ... quite simply because I felt this Irish inspiration which defined a unique atmosphere. 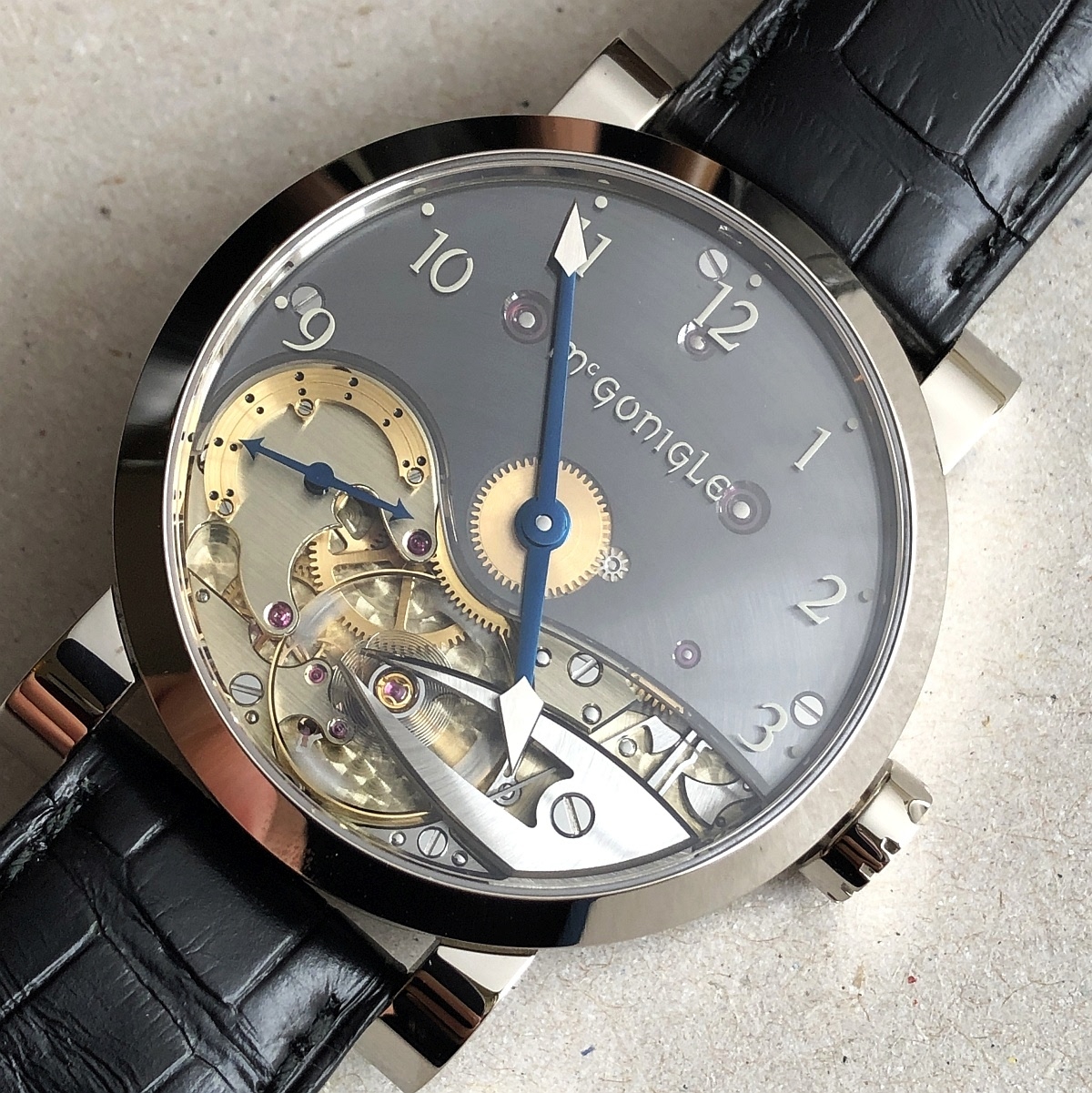 In 2011, McGonigle Watches presented the Tuscar, the brand's first watch equipped with a 100% in-house movement. Several versions of the Tuscar were produced (the One of Ten with a fully open dial and then the Banu version in pink gold) until the very last in white gold. It was this watch that I had the pleasure of seeing when I met Stephen.

It had been a few years since I last saw a Tuscar Banu and when I discovered this version in white gold, I felt the same emotion as the first time. I consider this piece as one of the most beautiful "simple" watches from an independent brand. I find at first glance all the aesthetic elements that I had liked with the tourbillon watch like the sumptuous hands, the numerals and the original shape of the balance wheel bridge. This shape is different from that of the tourbillon watch and here it is even more unique. It also gives its name to the watch since "Tuskar Rock" designates a group of rocks surmounted by a lighthouse in the Irish Sea. And the aggressive shape of the bridge was inspired by that of these rocks. 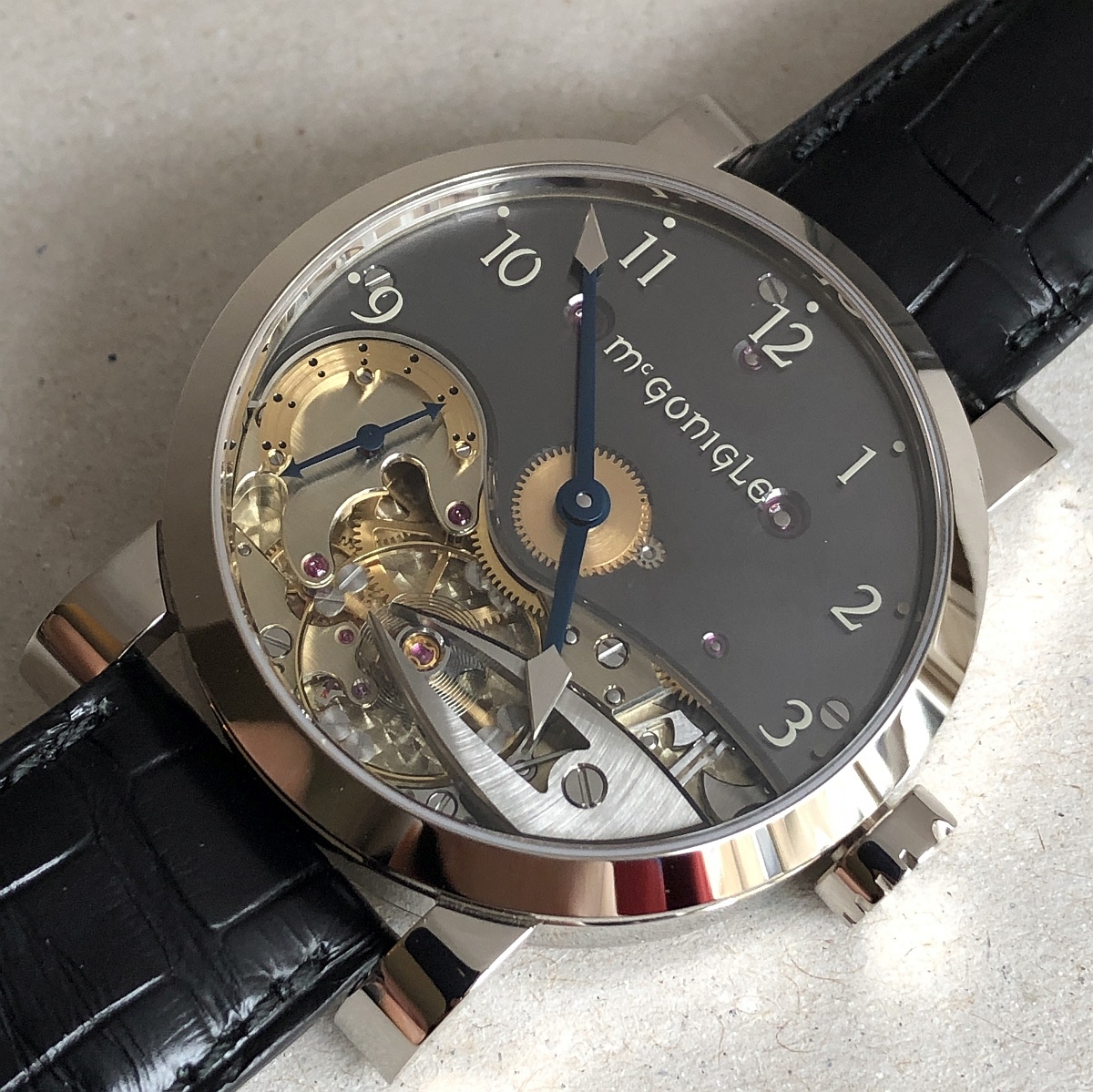 I also really like the concept of a half-open dial that reveals part of the movement (Banu meaning dawn). The contrast between the two areas of the dial highlights the work on the movement and the large balance wheel (almost 13mm in diameter) with slow oscillations (the frequency of the caliber is 2.5hz). The wheels and the graduation sector of the second hand, finished in yellow gold, stand out visually and bring dynamism and elegance to the whole. 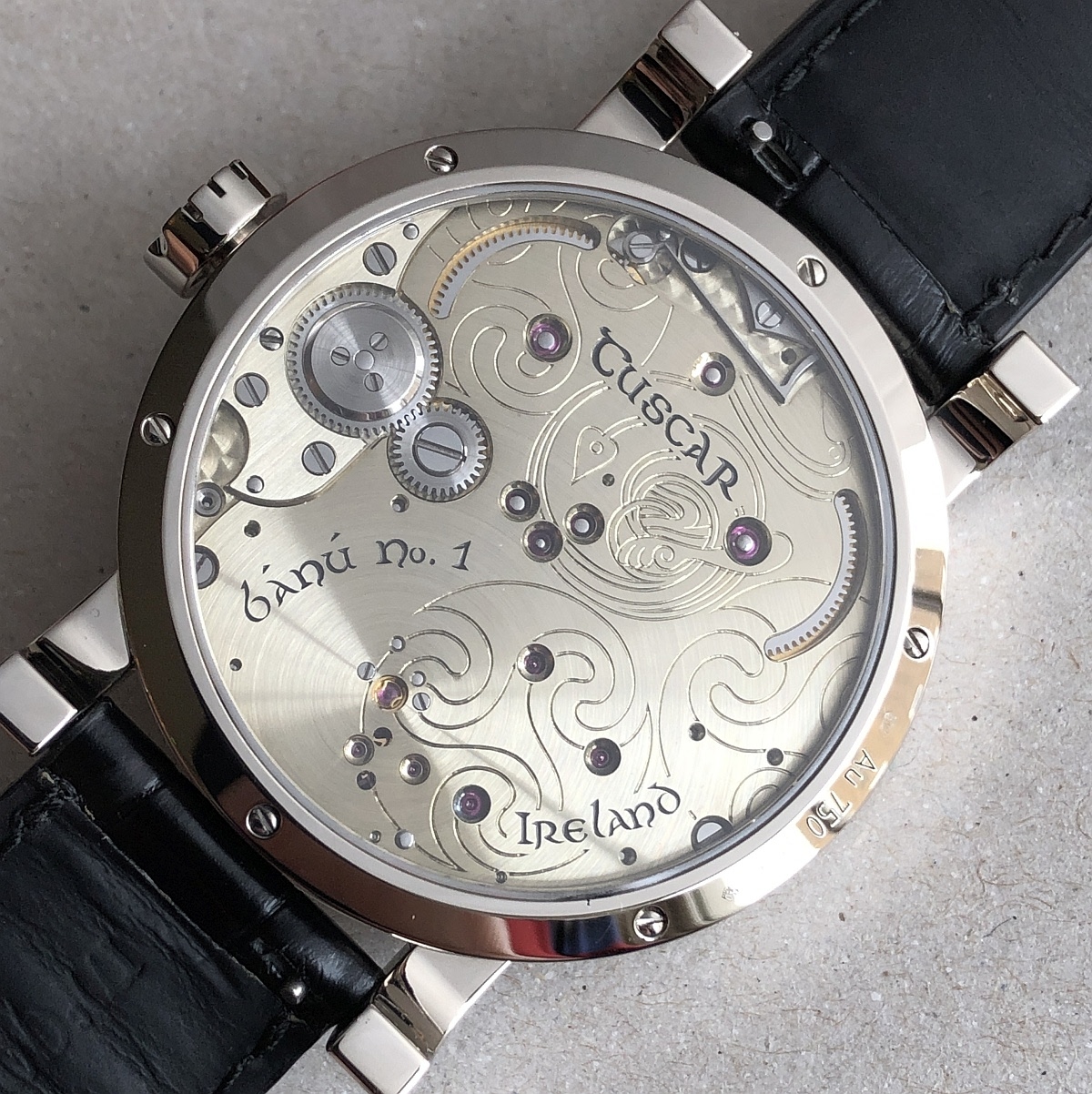 The off-centered second hand brings a beautiful balance and harmoniously distributes the various moving elements of the lower zone. The second hand is also made of blued steel, as are the main hands, which also have gold ends. The Tuscar Banu is thus fascinating to observe on the dial side thanks to the excellence of the finishes and the animations provided by the second hand and the balance wheel. I also appreciate the slate color of the upper area of ​​the dial, the intensity of which changes significantly depending on the light conditions.

The spectacle is just as pleasing on the movement side. However, it may surprise because, unlike many independent brands, Stephen McGonigle has favored a closed architecture here. Do not wait for chiseled bridges with shapes allowing the multiplication of inward angles. This type of exercise is found on the dial side. On the contrary, the back of the watch offers a sort of 4/4 plate (if I can put it that way) which meets two objectives: the first is to enhance the color and the reflections of german silver, the second is to create sufficient space to be able to insert the Celtic decorative patterns drawn by Frances McGonigle (Stephen and John's sister) and engraved by Michèle Rothen Rebetez. These patterns bring an extra touch of magic to the watch and reinforce its very special atmosphere. 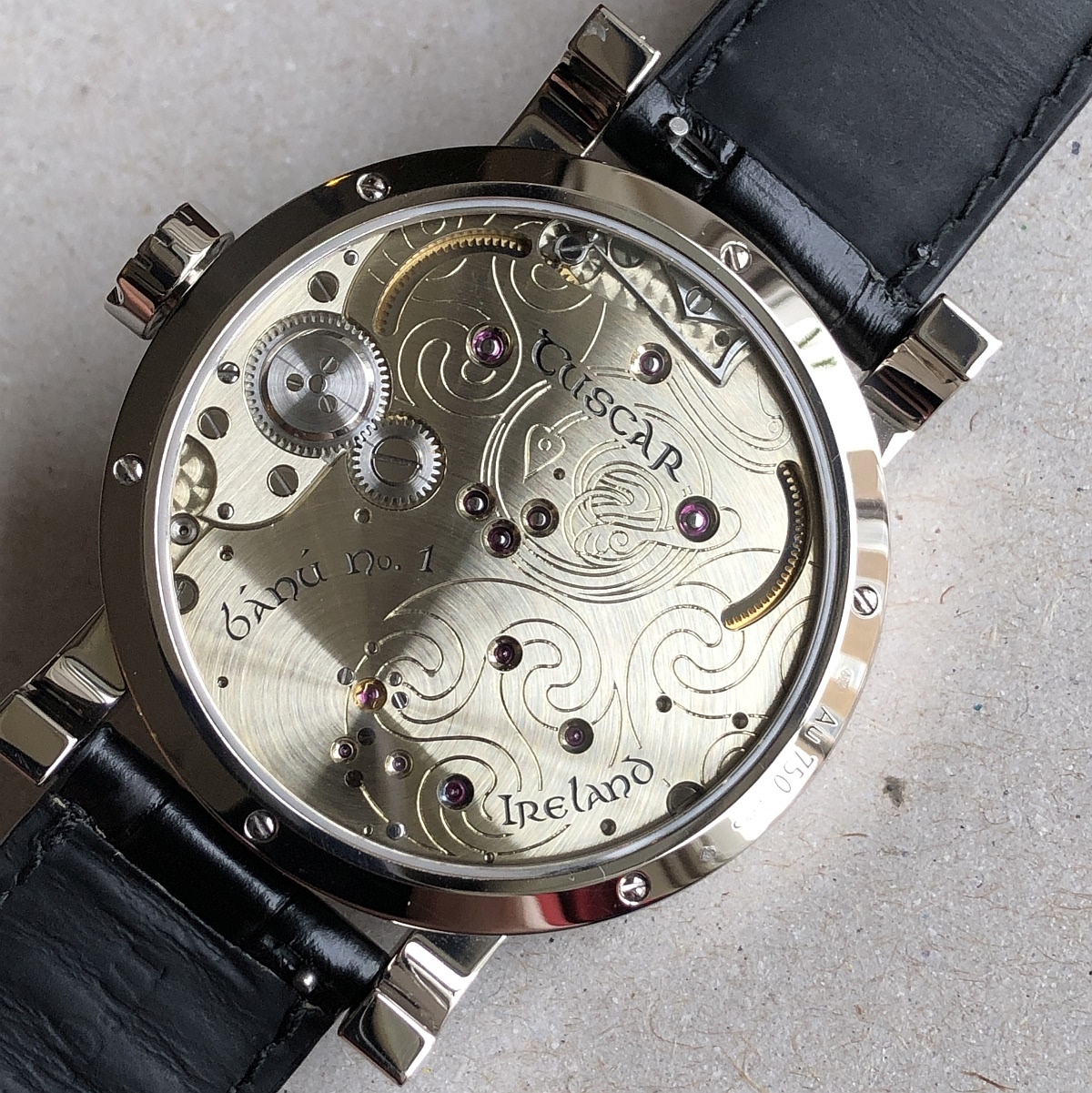 The other thing that sets the Tuscar Banu apart from other independent classic watches is its size. It is undoubtedly a large watch with a diameter of 43mm. The latter is however very well adapted to the context. The Tuscar Banu is an Irish watch, inspired by the myths and legends of a country of warriors! The hands and the balance bridge are there to remind us of this. I would not have imagined a delicate little watch with such origins! The case is not only large, it is also imposing because of its large lugs and its prominent crown. In addition, the movement perfectly fills the space whether at the front or the back of the watch. The fact that it impresses with its own size also contributes to the pleasure provided by the watch. This size is also necessary to accommodate, in addition to the large balance, the double barrel which allows to get a 90 hour power reserve. 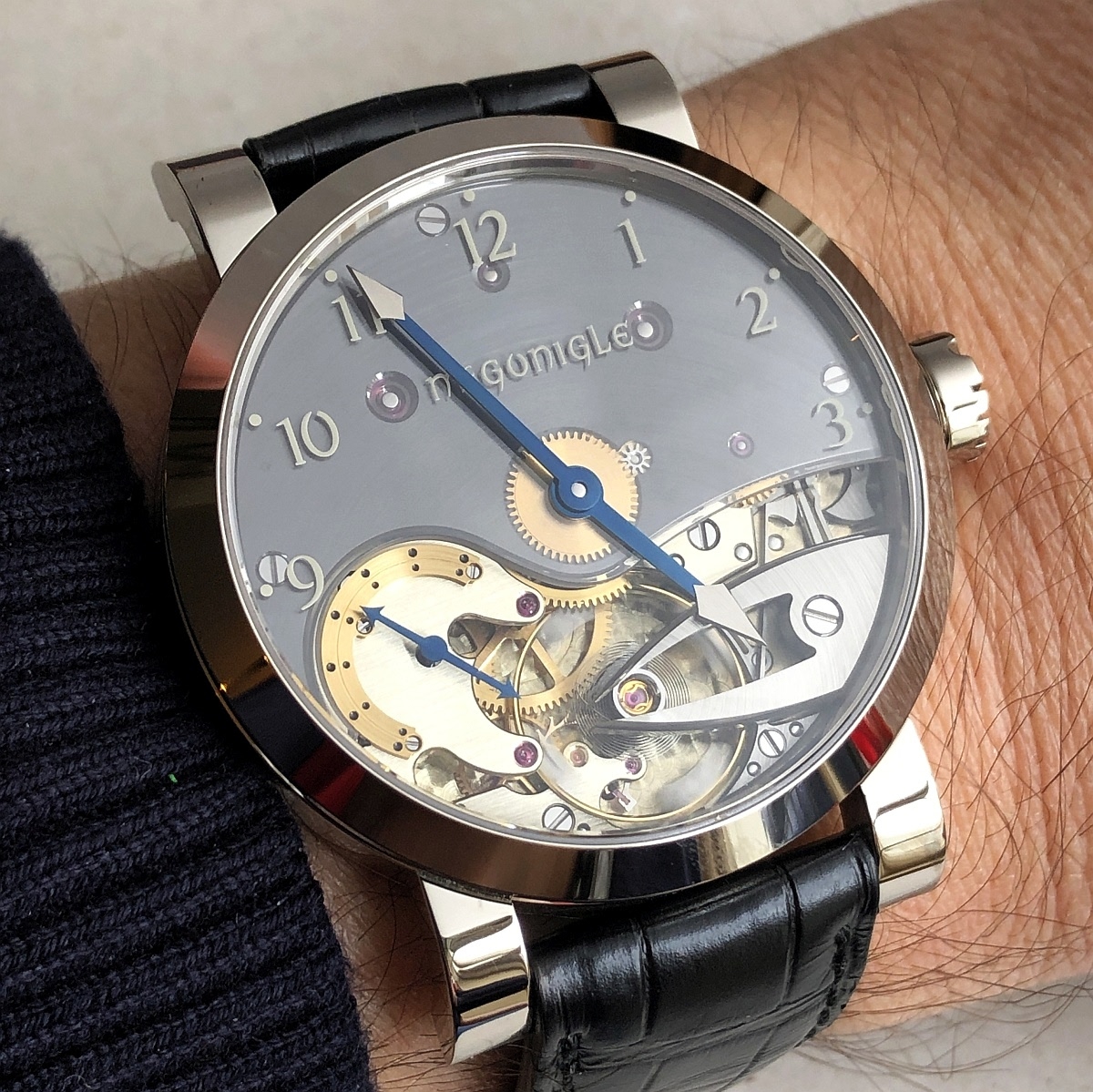 I am therefore an absolute fan of this watch produced in a series of 20 pieces. Powerful and refined, virile and charming, it offers a unique atmosphere magnified by a flawless quality of execution. This is exactly the kind of piece that I appreciate from an independent watchmaker: just by seeing it, I can guess the origins of the watchmaker. The Tuscar Banu is a watch with a very marked aesthetic commitment while remaining faithful to the principles of watchmaking tradition (low frequency, large balance wheel). This is what makes it so attractive. But excellence has to be paid for and you will have to pay more than 50,000 Swiss francs to acquire this watch that a Druid would not have denied. 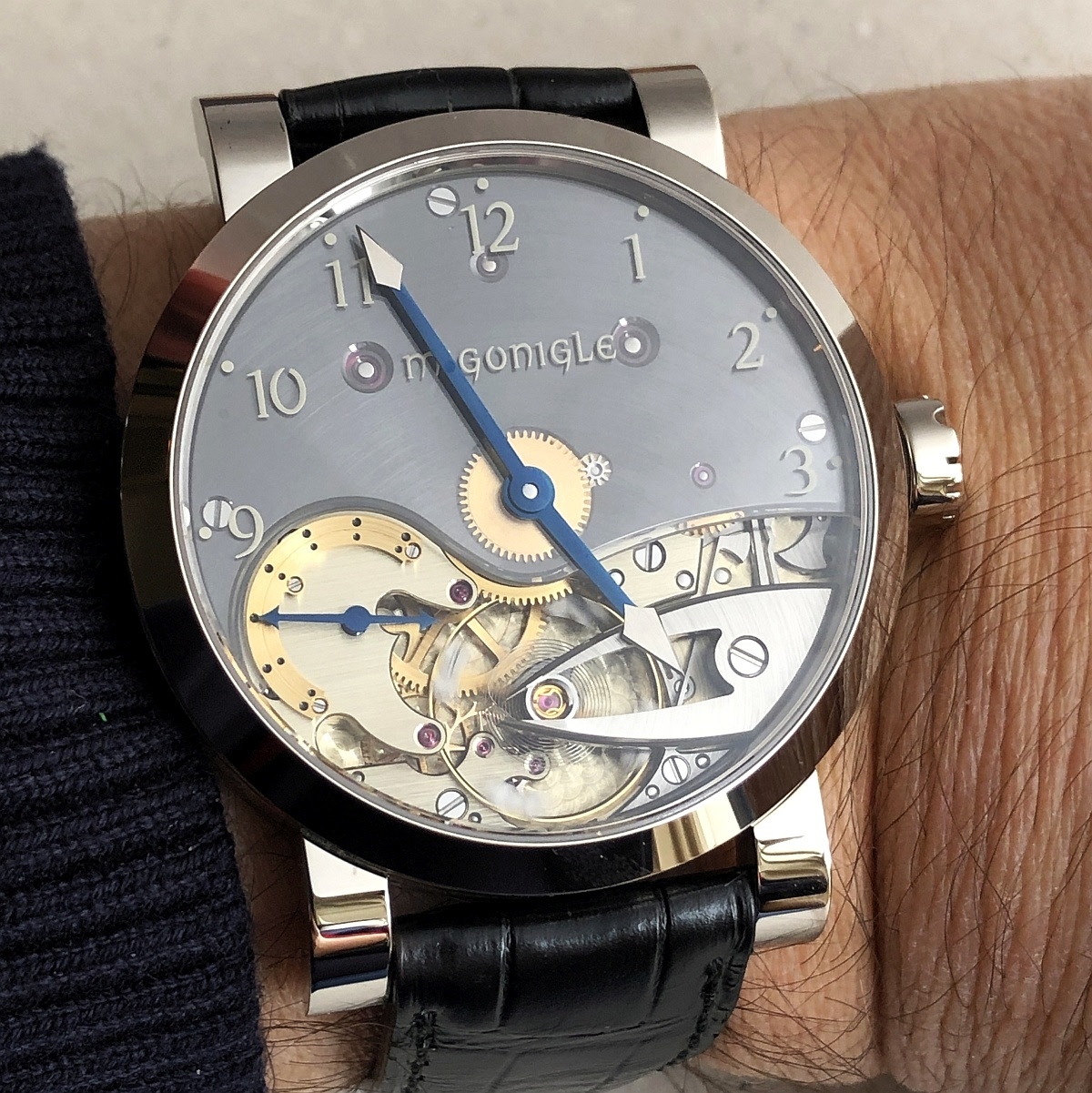 Pros:
+ an aesthetic success which immerses us in a unique atmosphere
+ the originality of the engravings
+ the pleasure of a low frequency movement
+ the german silver reflections

Cons:
- an imposing size, consistent with the style but which doesn't  make the watch suitable for all wrists

Hands on review of the McGonigle Tuscar Banu in white gold

By: foversta : March 3rd, 2020-14:17
I couldn't go to Dublin without saying hello to Stephen McGonigle. And I was very lucky: he was in Ireland during my visit and not in his workshop in Switzerland. I met Stephen and his brother John for the first time in Paris at the Salon Belles Montres i...
login to reply

A mesmerizing watch, with a lot of romantic. Thanks for the review, Fx. [nt]

Thanks Tim! Lucky you! [nt]

Yes, a "stars alligning" moment allowed for me to acquire it.

Thank you for detail review Foversta

Thanks Gelato Monster. Yes it is masculin because it is powerful imho. [nt]

Thank you for the review.

By: Jay (Eire) : March 3rd, 2020-17:26
The imposing size is something I wish wasn’t a factor. Was there any discussion of other projects, other watches?
login to reply

Look forward to hearing more, there have been rumblings of something I understand. [nt]

Thanks EinPa! Sure the Credor is also an amazing piece... with a totally different approach! [nt]

That’s exactly why I chose those two [nt]

Thank you for yet another great review!

you are absolutely right. Your sentence summarizes everything. [nt]

Thanks! It is really a mesmerizing watch. [nt]

A amazing and beautiful watch that you need to see in person imho.

For sure! The pictures don't catch the beauty and the shades of light... [nt]

Thanks for sharing. [nt]

You have found the reasons for Stephen's aesthetic:

By: TheMadDruid : March 4th, 2020-08:59
the history and the lore of Ireland. Good point about the size-no way could it be small, or extra-thin. Great review, François.
login to reply

Thanks a lot! And I'm glad to get your comments in this thread! [nt]

And fitting that it is on a green strap ;)

By: Mike H : March 7th, 2020-10:18
It is nice to talk about such niche brands that have a very small notoriety yet, they deserve to have some light on them. Merci FX
login to reply

I’ve yet to see or handle a Mcgonigle piece