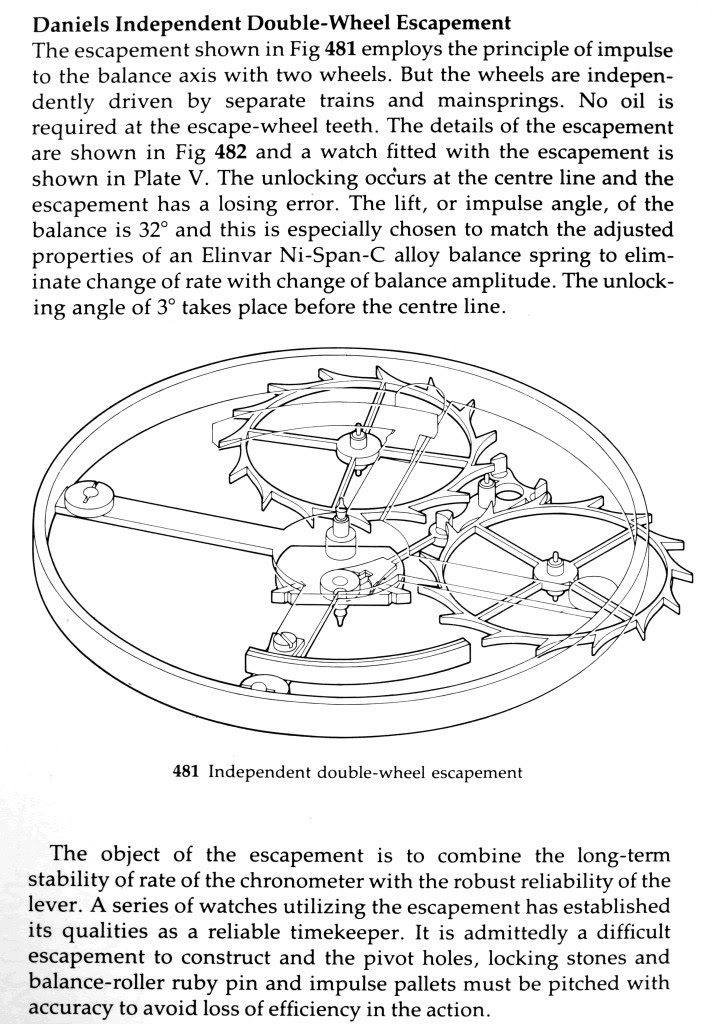 With the Charles Frodsham Double Impulse Chronometer Wristwatch coming out last year, we now have a second George Daniels movement on the market, along with Roger W Smith's evolution of the Co-axial (and Omega's, but let's leave that for the moment). I wrote Nick Manousos of the NY Horological Society: How would you compare and contrast these two movements? Nick kindly replied: "As with all escapements, there are advantages and drawbacks. The advantage of the double-wheel escapement is that it provides two direct impulses to the balance in opposite directions. This means it is a self-starting escapement, unlike the detent. The drawback is that it is more complicated to build, as it requires two complete gear trains to fit into the movement, turning the escape wheels in opposite directions. The co-axial only needs one standard gear train, however one of its impulses is indirect, given through the pallet fork. This means that one impulse may have a slightly smaller amount of energy compared to the other. For all practical purposes this is negligible, and the advantage of not needing to manufacture and fit an entire extra gear train into the watch outweighs it." I've posted his answer with permission. What do you think?

By: Spangles - Mr. Tabby : April 4th, 2019-10:55
With the Charles Frodsham Double Impulse Chronometer Wristwatch coming out last year, we now have a second George Daniels movement on the market, along with Roger W Smith's evolution of the Co-axial (and Omega's, but let's leave that for the moment). I wr...
login to reply

Haven't really thought about it but thanks for sharing! [nt]

It's one of those obscure questions that I thought was interesting! [nt]

I am also trying to figure out

By: xiu laba : August 3rd, 2019-23:03
The difference between Daniel's double impulse escapement and those of similar designs from FPJ and KV. I saw that FPJ's design has no locking jewel in the center of the detent, can't find much details on the KV one. Would anyone have more details? Thanks...
login to reply

Good question! I hope someone will chime in.

By: Spangles - Mr. Tabby : August 4th, 2019-09:08
Of course have a look at the Hodinkee article based on fellow purist Brandon Moore's question on the natural escapement www.hodinkee.com I imagine that having two gear trains makes changing aspects of the escapement possible in ways that aren't fo...
login to reply

I might be wrong (and more often than not I am ;))

By: xiu laba : August 9th, 2019-23:23
it seems like FPJ's design would have a larger sliding surface between the locking jewel and the escape wheel compare with the Charles Frodsham's natural escapement, which has another smaller locking jewel in the center of the lever, which locks with ever...
login to reply

I hope someone will chime in, have you written Nicholas Manousos about it? [nt]

Oh no I didn't. Sort of wanted to try and ask here first, never thought of actually asking the pros. Is he responsive? [nt]

He's very nice, I recommend writing hin with a well-considered question and seeing what he says. [nt]

Unfortunately I'll never be smart enough to have a valid opinion on this matter.

By: thegrailwatch : August 22nd, 2019-08:40
Just glad there are geniuses out there who know what they are doing.
login to reply

By: Baruch Coutts : August 26th, 2019-01:43
have you read SJX's latest article on the natural escapement? It cycles through the history of double escape wheel movements. Regards, Baruch
login to reply

By: Baruch Coutts : August 26th, 2019-15:30
There is something special being worked on, but it is currently under wraps. A self-imposed embargo on a collaboration with a fellow enthusiast. I will of course post about it here.
login to reply

Oh? Sounds interesting! I had the impression that it was CF related.

Hope it satisfies when it's ready! [nt]