A few lucky ones will get the Vianney Halter Deep Space Resonance..

Jan 12, 2021,17:45 PM
A major event in independent horology, that has gone un-noticed in the forum, is the launch of Deep Space Resonance Tourbillon prototype by Vianney Halter just a few days ago.
Nothing short of a horological miracle, this watch has been realized by Vianney (in his own words) after 7 years of mind-boggling effort. He speaks of being able to transform his idea into tangible form post-2013, when he launched the Deep Space Tourbillon.
Vianney, on his website describes the Deep Space Resonance thus - " My seven year mission -To travel through space and explain our Home planet's four dimensions to outer space aliens"!!!!
The DeepSpace Resonance combines a triple axis tourbillon and acoustic principle of resonance and  literally looks like a chapter from Jules Verne!
In his recent interview ( available on youtube) Vianney Halter explains the construction of the mechanism where the entire tourbillon cage in the center of the dial  makes a "revolution" on gears tracking around the inner circumference of the dial; while the tourbillon itself "rotates" on its axis literally tumbling over itself.  Two balance  wheels are "stacked" over each other connected by a bridge and this is different from the architecture of Resonance watches from Journe  ( Resonance) or Armin Strom ( Mirrored Force Resonance) or Dufour ( Duality), where the balances are placed side by side on the same plane.
To top the mechanics is the dial display that is based on the Vernier Calliper.
The watch will carry a price in the range of Euro 860,000 and will have a power reserve in excess of 65 hours.
Vianney will produce just 2 pieces per year and collectors that are fortunate to own one, will possess a masterpiece.
For more details, I would suggest that you visit vianney-halter.com where the watch has been described in greater detail by Vianney and also watch the youtube video of the watch in operation. Have not posted a link in accordance with the forum rules.
Cheers. 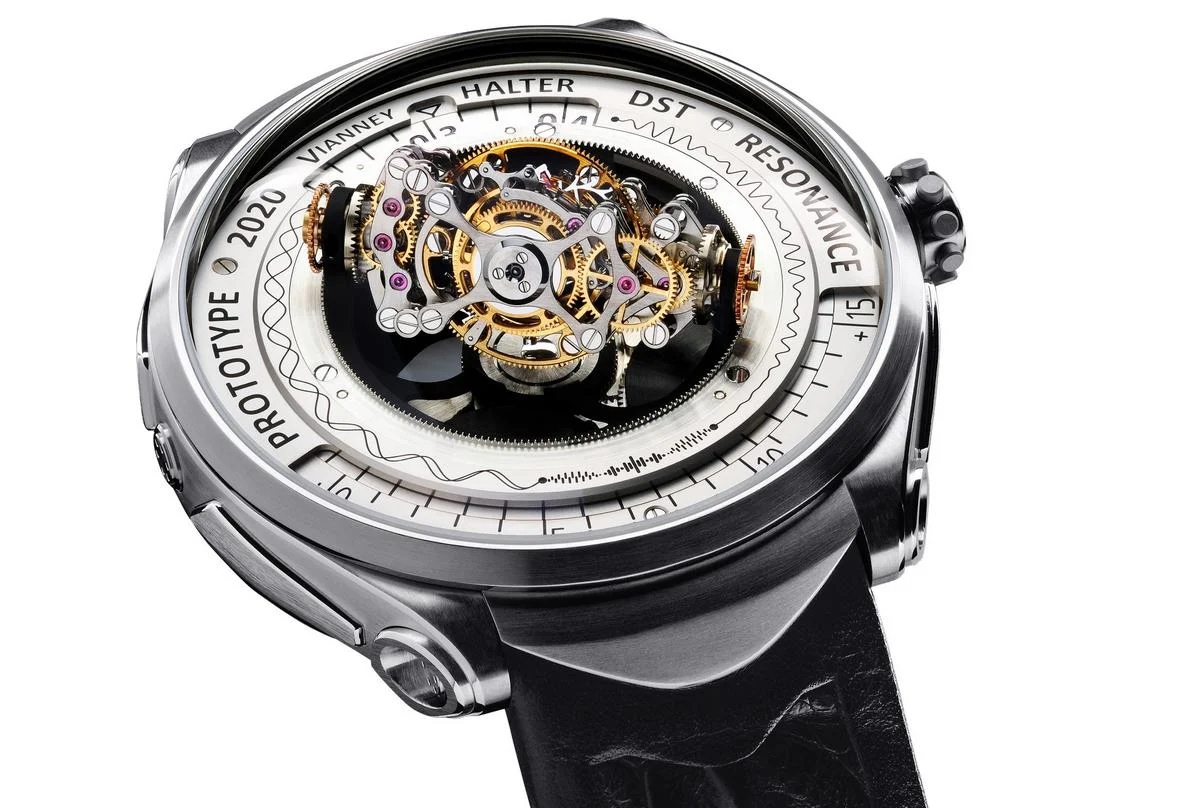 A few lucky ones will get the Vianney Halter Deep Space Resonance..

By: chintu : January 12th, 2021-17:45
A major event in independent horology, that has gone un-noticed in the forum, is the launch of Deep Space Resonance Tourbillon prototype by Vianney Halter just a few days ago. Nothing short of a horological miracle, this watch has been realized by Vianney...
login to reply

Amazing... But considering Vianney is a one-man show, what happens to serviceability once he retires?

By: patrick_y : January 12th, 2021-18:00
This amazing piece was definitely noticed by me. And it is indeed a lovely piece.
login to reply

Same thing with any independent..

By: chintu : January 12th, 2021-18:16
This problem will remain with regard to any independent watch, unless they have corporatized themselves. The same question will hold true of a Dufour or Kari, Roger Smith, Ferdinand Berthoud, David Candaux , Eva Leube ...and many. The important thing is a...
login to reply

A Dufour Simplicity can be serviced fairly easily by any competent watchmaker.

By: patrick_y : January 12th, 2021-19:14
But something that is this unusual would be much harder to service. I'm just worried down the road!
login to reply

A genuine issue of course

By: chintu : January 12th, 2021-19:19
Perhaps the AHCI can make it mandatory for all its members to place the designs and drawings in Escrow to be released by AHCI to WOSTEP after the lifetime of the creator so that students can be trained in the repair of these masterpieces as a unique acade...
login to reply

Or AHCI could do this..

By: chintu : January 12th, 2021-19:40
Set up the Service Center for repairing AHCI member watches; hire wostep trained watchmakers as staff and get repair royalties as well, to fund the cause of independent watchmaking
login to reply

Not impossible... But most collectors won't like the idea of students repairing a watch...

By: patrick_y : January 12th, 2021-19:46
Any scratch on the main plate and I'd be furious. Hence I want the original guy to do all the servicing (or at least the original company), so I can say this watch has been taken care of by one person or one company.
login to reply

Marco Lang is doing just that with his Zweigesicht-1

By: patrick_y : January 12th, 2021-22:40
That shock recorder on the Zweigesicht-1 is very interesting. And it's a good thing he will tell others how to service it!
login to reply

Love the idea of the AHCI archiving the informations required to service the member's watches.

By: Steyr : January 13th, 2021-13:36
This would be a strong message for the collectors who, sometimes have -exaggerated- doubts related to this.
login to reply

To archive technical schematics and servicing guides is a step in the right direction, but it doesn't solve all the problems. Concerns are not exaggerated if that collector individual expects excellent service...

By: patrick_y : January 13th, 2021-16:38
A simple movement from an independent should be able to be serviced by any competent watchmaker. But something more complex might be difficult even with the schematics and technical instructions of how to do it. Furthermore, servicers sometimes damage thi...
login to reply

Let us look at choices

By: chintu : January 13th, 2021-19:03
An independent watchmaker is put on a pedestal because of what he creates and not because of what he can repair. If collectors are to repose greater faith in these creations and part with their large sums of money to obtain those creations, the service is...
login to reply

The problem is this... Owners are ignorant and uneducated, easily fooled...

By: patrick_y : January 14th, 2021-23:25
If a "trainee" scratches a plate, and it's a plate that we don't see, the watch is still flawed, just that we can't see it. I just don't want something "corrupted" in my movement because if it's not visible through the sapphire case back, I will probably ...
login to reply

Amazing and a true masterpiece

His Daughter and team will be there to support owners

But how many watchmakers are on the team?

By: patrick_y : January 12th, 2021-22:42
It's such a small team. And the watches are so unique... I admire his lovely creations, but I worry about servicing possibilities. Already servicing costs are high and times are long.
login to reply

In Addition to Himself and Daughter 7 to 12 depending on demand, seasonality, better offers, etc etc typical HR issues, look at the transitions at Anderson and CvDK....

By: SALMANQ8 : January 13th, 2021-04:33
They managed to keep the spirit and branding and production going post founders exit.
login to reply

I see, it always felt much smaller, I didn't think there were that many people at Vianney Halter. Thanks SalmanQ8!

This info is not public knowledge

Thank you for sharing!

Serviceability doesn't seem to be an issue.

By: Steyr : January 13th, 2021-13:30
To me, the only issues one can find are related to special materials (alloys) and finishing. Alloys are not an issue with Vianney's watches as he's using very common material. Finishing, on the other hand could be trickier. Of course, skills are required,...
login to reply

Let's just say that we're not watchmakers, so our thoughts about servicing whether it's difficult or not is purely conjecture.

Not unnoticed, just unmentioned... until now!

By: Brandon Skinner : January 12th, 2021-18:26
Thanks for bringing this masterpiece to the forefront
login to reply

Thanks for the enthusiastic introduction to this remarkable piece of horology! Quite a significant departure from the latest Louis Erard collaboration, and a watch that I'm sure will greatly appeal to many established indie collectors!

By: FabR : January 12th, 2021-18:32
There's no problem if you would like to link to external sites or YT videos that are meaningful to the discussion (unless they are obviously commercial), like you did to VH's own introduction on his website. For the interested readers, the same watch was ...
login to reply

By: chintu : January 12th, 2021-19:02
and a more detailed explanation of this caliber and watch
login to reply

Thanks, really good links, also the physics/mechanics behind this watch is made very understandable👍

Not un-noticed... it appeared but we were all baffled

Naaaah, I noticed it. I prefer the simpler first version. But I can also admire this new chapter. As remarkable as fascinating and impressive.

It has been noticed

By: piccolochimico (aka dsgalaxy1) : January 13th, 2021-04:03
The resonance is not truly appropriate to describe the mechanical, and not physical process by which the 2 escapements are connected
login to reply