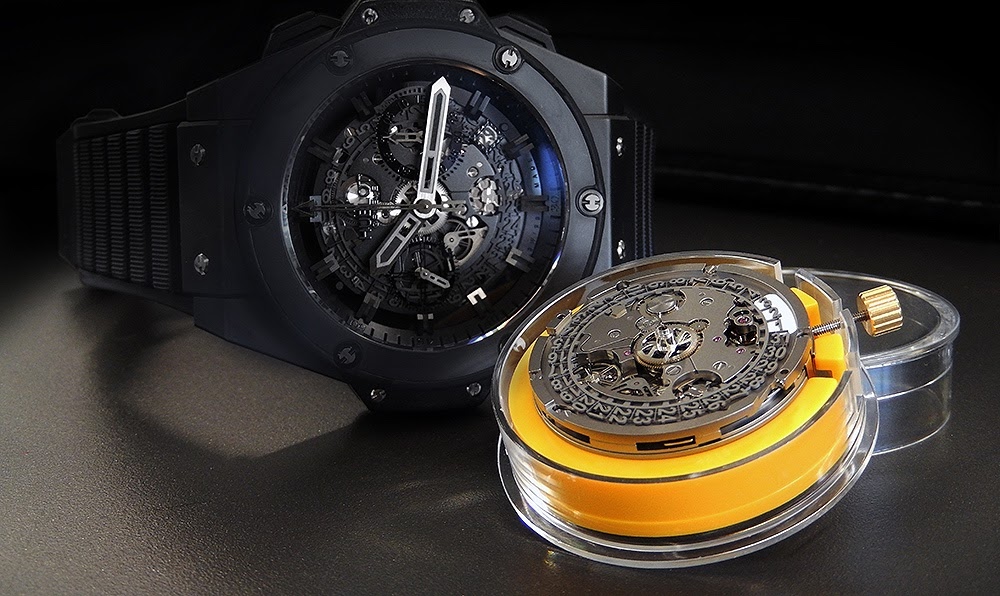 Following the success of the Big Bang, launched in 2005, Hublot set out on its next big challenge, to create an in-house movement following the same design philosophy of their iconic case. The result is the calibre 1240 “Unico,” which demonstrates the brand’s extraordinary creative and technical prowess and establishes Hublot as a true manufacturer and horology heavyweight.
In this article, I will go inside “Unico” and explore some of the details that make it unique. While many of these features are not exclusive to Hublot, the brand’s implementation and improvements make Unico a formidable competitor with its alluring fusion of tradition and technology.

For this series, Hublot graciously provided me with a Unico movement to study. More importantly, they provided me with access to the people responsible for bringing Unico from concept to reality.
Please keep in mind that my observations are those of an enthusiast and passionate admirer of the brand and not those of a trained watchmaker. I encourage feedback and discussion on the information that follows.
Genesis of Unico
In 2008, then-CEO Jean-Claude Biver pulled together a team to begin development of the Unico. “He [Mr. Biver] wanted a strong movement to replace the 7750,” explained Unico designer Chistophe Lyner. “We had a white paper. That’s common around here. He lets you be free to design.”

So when the team began, they did so with minimal constraints from their CEO. According to Mr. Biver, “We just wanted to keep the incredible quality of the 7750, but have it modernized with a column wheel, a double clutch, chronograph functions on the side of the dial and a flyback. But basically we should keep some of the construction rules of the 7750 and fuse them with modernity. Unico is a fusion between 7750 and the future.”

As a result, Unico, has essentially the same dimensions as the Valjoux and is completely interchangeable with cases and dials designed for the 7750. But the similarities end there.  Where as the 7750 typically has a 42 to 46-hour power reserve, the efficiency of the Unico allows for 72 hours. As Mr. Biver pointed out, “The movement in its conception is unique, different and the first chronograph built in that concept. Therefore the name Unico.”

Other significant features of the Unico include a Pellaton bi-directional winding system and a modular escapement utilizing silicium for the pallet fork and escape wheel. These components will be covered in Part III of this series.
The Devil is in the Details
Designing a simple replacement was not enough for a brand obsessed with the smallest details. The “hanging calendar” feature of the 7750, for instance, uses a rigid date finger to drive the calendar wheel. Though this is a generally robust method, it precludes the use of the “quick set” date feature during certain hours. Most are familiar with this well-documented restriction, which is even mentioned in Hublot’s owner’s manuals that predate the Unico.

For the Unico, this “quick set” limitation was unacceptable to the engineers at Hublot, who chose instead to incorporate a semi-instantaneous calendar mechanism that employs a flexible calendar finger with the ability to move in either direction. This unique feature works in tandem with a traditional jumper to smoothly advance the date wheel.  Additionally, Unico has a three-prong date corrector that can disengage from the calendar to allow setting of the date at any time without risk of damage to the mechanism.
Design of the Times
From its very inception, Unico followed a design philosophy that remains consistent throughout the brand by drawing from the same DNA as Hublot’s Big Bang and King Power cases. The movement’s eclectic, Art Deco influenced styling pays tribute to classic design, though forged with modern technology.

Unico has clean, sharp lines drawing from its Art Deco influence. The semi-skeletonized bridge for the gear train visually interacts with the matching ratchet wheel to create a mesmerizing animated effect.
Comparing the cases and movement, Mr. Biver pointed out, “Both have a strong technical look, both have mid-1930’s strong aesthetic design and both are totally innovative in their construction.” He went on to explain, “The movement in its conception is unique, different and the first chronograph built in that concept. Therefore the name Unico.”

Modularity Moderne
The first thing you may notice when holding the Unico, is that parts are not “shotgunned” onto a main plate. Its 330 components are neatly organized into logical modules based on their function. While I would not recommend you delve into your own watch, this organization makes it easy, even for an enthusiast, to understand its construction.

Beyond the aesthetics, there are several benefits to the modular construction of the Unico. First and foremost, the modular design holds true to the DNA of the brand by creating a scalable platform that allows the company to easily change components or add complications in future versions. One such variation is the HUB1270 Unico used in the Big Bang Chronograph Perpetual Calendar that displays the date, day, month and leap years.

The Art Deco styling of Unico is complimented by modern wheel designs reminiscent of an Italian sports car. This unusual mix of components results in a clean yet technical-looking piece with enough contrast to keep you staring.  Yet, the assortment of materials and finishes go beyond aesthetics as each variation typically has functionality as its basis.

Looking at both sides of Unico, you’ll notice that various wheels have different finishes. The wheels on the front have a shiny, mirror finish while most on the back are brushed.

The finish and manufacturing process for each wheel is determined by its particular function. The ratchet, winding and gear train wheels, for instance, are produced by traditional machining methods to provide superior wear resistance for parts transmitting power from the barrel - the parts under constant force. The low pressure wheels of the chronograph, however, are produced with a state-of-the-art UV-LIGA process for increased hardness and accuracy.

About UV-LIGA
Ultraviolet LIGA is a photolithography process similar to that used to produce electronic circuitry. With UV-LIGA, an ultraviolet light projects through an AutoCAD-generated mask onto a gold-plated conductive wafer covered with photosensitive resin. The light polymerizes the resin in the UV-exposed areas. A solution then dissolves the resin not exposed to UV, creating a virtually perfect mold.

In the next step, the conductive wafer is electrically charged in a chemical solution, causing galvanic deposition of nickel phosphorus particles within the mold. The mold is ground to the proper thickness, then placed in another solution to dissolve the remaining polymer, releasing the metal parts. The resulting components are created within tolerances of just two microns (2µm), or 2/1000 of a millimeter, and have a mirror finish that requires no polishing.

UV-LIGA is an expensive process, and larger parts take longer to “grow.” Still, this method can produce complex, multi-level components that are unachievable with traditional CNC or other stamping techniques. For the Unico, many of the wheels, hammers and heart-shaped pieces are created with UV-LIGA.
UV-LIGA by Mimotec SA
Back to the Future
While some are curious about the stark, sand-blasted, black ruthenium finish of Unico’s plates and bridges, this approach stays true to the brand’s official color, which is … black. To add Côtes de Genève or other common decorations would be a submission to industry norms. Putting things into perspective, Mr. Biver explained, “The finish is plain because we wanted to give it a technological look, which is not the case when you have these typical ‘Côtes de Genève,’ which most of the brands are using today. Our look should be inspired by today, not tomorrow, and should be different from others. Even when the plain finish is much more delicate, because you see every (even very small) defect, which of course is not the case with ‘Côtes de Genève,’ which was invented for the simple reason to hide the defects of the surface. You will never see a Breguet watch of the 18th Century with a ‘Côtes de Genève!’”

Uniquely Secure
Finally, all the design elements mentioned culminate in one of Unico’s most significant features - security. There is simply no mistaking a Unico. Considering the dial side chronograph, sculpted bridges and UV-LIGA produced parts, only the most skilled and well-equipped manufacturer could produce a movement even remotely akin to the Unico. The technology and millions of Swiss Francs required for such an endeavor present a significant barrier to entry for would-be counterfeiters.

As many in the industry race to create elaborate new technologies to thwart criminals, Hublot’s bold yet basic approach creates a movement with a solid design that essentially becomes its own fingerprint and a guarantee of unquestionable authenticity. 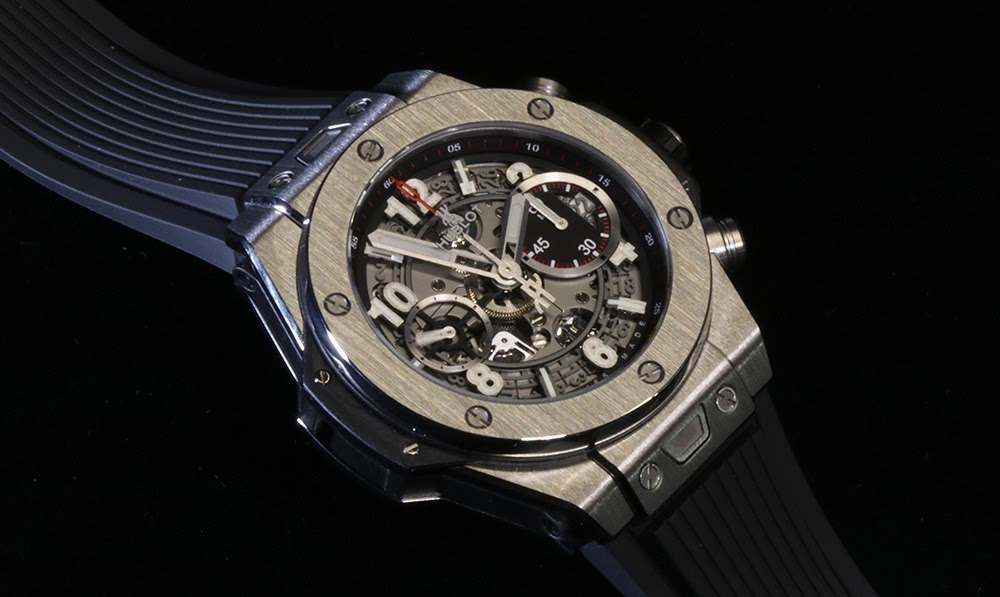 Unico: Only Just Beginning
It’s been about ten years since the Unico was first conceived. But even with its proven performance and reliability, Hublot continued look for ways to improve upon its crowning achievement.
Listening to many customers who clamored for a smaller Big Bang, Hublot began development of a smaller version of the Unico.
At Baselworld 2018, Hublot announced the release of a smaller Big Bang design that nests a new version of the Unico inside a 42mm case. The Unico Calibre 1280 is much more than just a smaller Unico, however. It is the culmination of nearly a decade of state-of-the-art research and development - improvements on an already formidable design.
In an upcoming article, I will cover some of the latest innovations that not only power the new 42mm Big Bangs, but will also be implemented across the Unico family.
With the Unico II, Hublot has demonstrated its commitment to ongoing innovation once again, proof that perfection is only relative to a moment in time as the evolution of Unico continues.

By: JToddH : November 28th, 2018-13:31
Following the success of the Big Bang, launched in 2005, Hublot set out on its next big challenge, to create an in-house movement following the same design philosophy of their iconic case. The result is the calibre 1240 “Unico,” which demonstrates the bra...
login to reply

I had no idea that this movement was so technologically advanced

Thank you for that great article!

By: Marcus Hanke : March 28th, 2018-02:08
Also the description of the LIGA process is very informative. I am glad you stated that the parts shown are not made for the Unico movement. When Ulysse Nardin started to employ the LIGA manufacturing, they soon realized that it was less than optimal for ...
login to reply

Interesting...don't Rolex, Seiko, LF, and others use LIGA for the lever and escape wheels?

By: brandon1 : March 28th, 2018-20:44
Rolex's statement about the new chronergy escapement: "High-technology processes are also used, such as LiGA (micromanufacturing by electroforming) to produce the paramagnetic pallet fork and escape wheel of the new Chronergy escapement." Seiko: "The 9S66...
login to reply

By: Marcus Hanke : March 29th, 2018-06:59
... so I have to use my leaky memory to compose a reply. I know that Ulysse Nardin created the so-called Dual Ulysse escapement in their 160 years anniversary timepiece by LIGA process in 2006. Back then, Nickel-Phosphor composition of complex shapes was ...
login to reply

Thanks Marcus, I appreciate the feedback.

By: brandon1 : March 29th, 2018-13:52
Very possible indeed that modern advances have enabled this process to create components suited for fast-moving and sliding components, and this probably accounts for its use today among mainstream brands/watches. Thanks again, Brandon
login to reply

I echo Marcus Hanke in thanks for this article

By: MTF : March 28th, 2018-02:58
I learned more about the process and it showed Hublot truly is at the forefront of technology. All this for a 'standard' workhorse movement. Regards, MTF
login to reply

Thnaks very much for the details, pics and explenations!

By: MCG (Markus) : March 28th, 2018-03:21
Looking already very much forward to the UNICO 1280 thread! PS: One small thing: The moonphase calibers are not Unicos but Sellitas with modules...
login to reply

Good Catch! I removed those photos. Thanks!

Thanks Todd for this amazing article! and the Unico is a great movement to live with [nt]

Thanks for sharing. [nt]

That photo manufacturing is amazing. [nt]