For ten years now, the Senator Chronometer has combined an unmatched tradition with certified precision to meet the highest of standards. In 2019, Glashütte Original celebrates the anniversary of a timepiece that carries the impressive legacy of German chronometer construction into the future in an innovative way.

Generations of explorers and seafarers relied on marine chronometers, robust and highly precise ship clocks, which were much more than mere instruments. Encased in their precious wooden boxes, they defied high waves and rough weather, helping their owners to navigate the world’s untamed oceans in safety. In the process, they became indispensable companions for ship captains – and an inspiration to the watchmakers of Glashütte Original.

In 2009, the Saxon manufactory created an evocative tribute to this legendary class of robust timepieces in the form of the Senator Chronometer, an elegant and at the same time sophisticated timekeeper for the wrist. The most recent version, featuring a contemporary design with restyled red gold case and a slimmer bezel, was unveiled this past spring. Like its predecessors, it accompanies the wearer reliably through all situations in life, thanks to its certified accuracy.

Every single piece is tested for accuracy by the German Calibration Service, which measures its performance over 15 days against strict standards. The watch may only bear the title “chronometer” if it passes the tests in five different positions and at three different temperatures within a maximum average daily rate deviation of no more than two seconds.  The manufactory made manual winding movement Calibre 58-01 with zero-reset mechanism, “jumping” Panorama Date and a power reserve of just under 45 hours easily meets these criteria.

This sophisticated mechanism already formed the basis of the first Senator Chronometer, released in rose gold in 2009. With this timepiece Glashütte Original created a timeless classic, elected “Watch of the Year” in 2010 by readers of the specialist watch magazine, “Armbanduhren” (Wristwatches).

Only a few years later one of its successors was also honoured by connoisseurs of fine watches: the white gold version with its expressive blue dial was named winner of the “Golden Balance” award by “Uhren-Magazin“ (Watch Magazine). In addition, in 2010 the German watchmaker presented a limited edition in platinum. This edition consisted of 13 exclusive sets: each set containing one Senator Chronometer in platinum and one restored marine chronometer originally made in Glashütte placed together in a hand-crafted oak box – an irresistible combination for fans of the high art of watchmaking.

These precision timekeepers and their wealth of tradition inspired the design of the dial on the latest addition to the line: The displays, among them the running time display with the discreet day-night indicator, are arranged following that of their historic predecessors. Above them, pear-shaped “poire” hands in blued steel follow their course, framed by a laser-engraved, galvanic black railroad chapter ring, Roman numerals and the particularly slim bezel of the newly designed case in red gold, which leaves even more space for the impressive face of the timepiece. One can also admire, through the sapphire crystal case back, the elegant movement and its finely decorated three-quarter plate, screw-mounted gold chatons and hand-engraved balance cock.

For ten years now Glashütte Original’s watchmakers have followed, with great success, a basic premise calling for further development of  the Senator Chronometer‘s timeless and elegant design while preserving its richly traditional character. 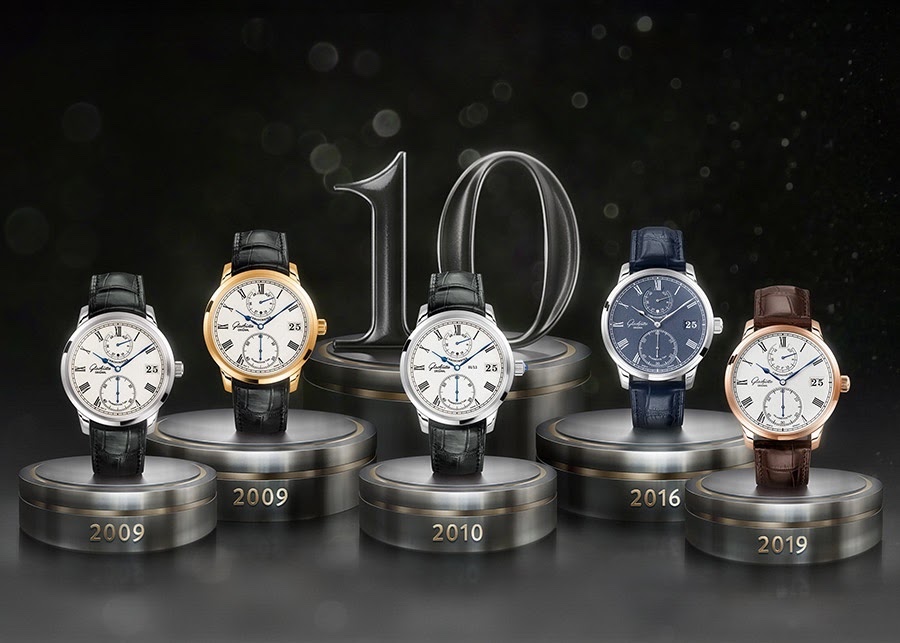 Senator Chronometer: A bridge from one era to another

When James Cook, Alexander von Humboldt, Roald Amundsen and other courageous explorers of the 18th, 19th and 20th centuries set sail, they invariably took along a masterpiece in the art of watchmaking, since to guide their ships across the oceans they made use of marine chronometers. From 1886 on, watchmakers in Glashütte put their stamp on the era of these highly accurate ship clocks. By the end of the 1970s, some 13,000 robust marine chronometers had been manufactured in the Saxon town. They were among the most accurate portable mechanical timekeepers of their day. Today this technological and craft brilliance continues to be nourished and developed by Glashütte Original. In 2019, Glashütte Original celebrates the tenth anniversary of the Senator Chronometer, which has carried the rich legacy of German chronometer construction to the wrist and with that into the future in an innovative way.

In today’s world, knowing the exact time of day is taken for granted. Until some 250 years ago, however, this was by no means the case. Precision timekeepers for portable use on land and water were still unknown. At sea, this was a deadly problem, since one must know the exact time in order to calculate the geographic longitude and with that the precise position of a ship. The local time at the point of departure – at the ship’s home port, for example, or any other location whose longitude is known – serves as a point of reference for the calculation. Used in combination with the position of the sun, it allows one to determine the precise time on board.

For centuries, however, ship captains sailed the seas without precise timekeepers that could have indicated the time, despite rough seas and weather, in a reliable manner. As a result, determinations of positions were less than precise, which more than once had tragic consequences for an entire fleet of ships. This remained a problem until John Harrison, a British carpenter, found a solution. In the middle of the 18th century, he developed a portable clock that functioned reliably on the high seas – the first chronometer, which set new standards in the precise measurement of time. In the course of time the classic form of the marine chronometer that we know today was developed. Gimbal-mounted and protected in a wooden box, these chronometers were often set directly into the ship’s chart table.

A knighthood for Glashütte

John Harrison‘s invention not only paved the way for innumerable explorers and modern navigation, it also broke new ground for the craft of watchmaking. At first, chronometers came exclusively from England and France, until at the end of the 19th  century the German government formed a plan to equip its imperial navy with timekeepers made in Germany. Beginning in 1886, the first marine chronometers were built in Glashütte, near Dresden, where in 1845 the first watchmakers had settled and quickly earned an excellent reputation. Already at the time, the chronometer testing centre at the German Naval Observatory in Hamburg deemed both the innovative mechanism and the exceptionally precise and stable construction to be “exquisite”. For the young watchmaking industry in the little town in the Ore Mountains – hundreds of kilometres from the coast – this was an honour like no other, comparable to receiving a knighthood.

The watchmakers of Glashütte were able to maintain this exceptional quality for decades. Altogether, some 13,000 mechanical marine chronometers were manufactured here in the course of time, which gave the little Saxon town an export hit, with customers in nearly 30 countries around the world. By the middle of the 20th century, with the arrival of satellite-based navigation systems such as GPS, the classic marine chronometer became less important. Nevertheless, with few exceptions, captains today still set sail with an analogue ship clock as on-board insurance – just in case.

Tradition and refinement for the wrist

In 2009, Glashütte Original revived the tradition of the chronometer – a reliable partner that never lets its owner down. As a tribute to the legendary robust clock in a wood box, Glashütte Original presented the Senator Chronometer, an elegant and at once sophisticated timekeeper for the wristwatch for the wrist. The successful debut model was followed by new versions, among them the latest, in a red gold case with a slimmer bezel, presented in the spring of 2019. Common to all models in the line is their certified precision. A watch may only bear the title of “chronometer“ if it survives rigorous testing for quality by a recognised testing institute. In Germany, the German Calibration Service performs these tests at its lab in the Glashütte Observatory. Every Senator Chronometer is tested here for a period of 15 days. The movement, already mounted in its case, is tested in five different positions and at three different temperatures ranging from 8 to 38 degrees Celsius. The watch only receives the relevant certificate if it performs within an average maximum daily rate deviation of two seconds.

The Senator Chronometer owes its character as a genuine work of art to the complex mechanics of the manufactory’s own manual winding Calibre 58-01, which mastered these demanding requirements right from the start. Its running time display is powered by an impressive planetary gear train; the power reserve is just under 45 hours. The exceptional precision of the watch derives as well from two additional complications: an innovative zero-reset mechanism with minute detent makes it easier for the wearer to set the time of day. And the characteristic Glashütte Original Panorama Date at 3 o’clock advances to the next day within a few seconds of midnight, thanks to the “jumping date” mechanism.

The tradition of precision timekeeping, however, serves as an inspiration not only for the movement, but also for the external appearance of the Senator Chronometer. The displays on the dial are presented in the same configuration as their historic predecessors, the marine and pocket chronometers. Aligned along a central vertical axis on the dial are the running time display with its practical day-night indicator, at 12 o’clock, and the small second at 6 o’clock.

Embedded in wooden boxes, chronometers were at one time vitally important instruments for the most intrepid seafarers. Today’s style-conscious man wears a chronometer on a leather strap, as an accessory of great symbolic weight. Precision timekeepers have lost nothing of their fascination and remain, as reliable companions, irreplaceable. Were James Cook or Alexander von Humboldt to set out on a voyage of discovery in 2019, they might well take along, strapped to their wrist, a Senator Chronometer from Glashütte Original. 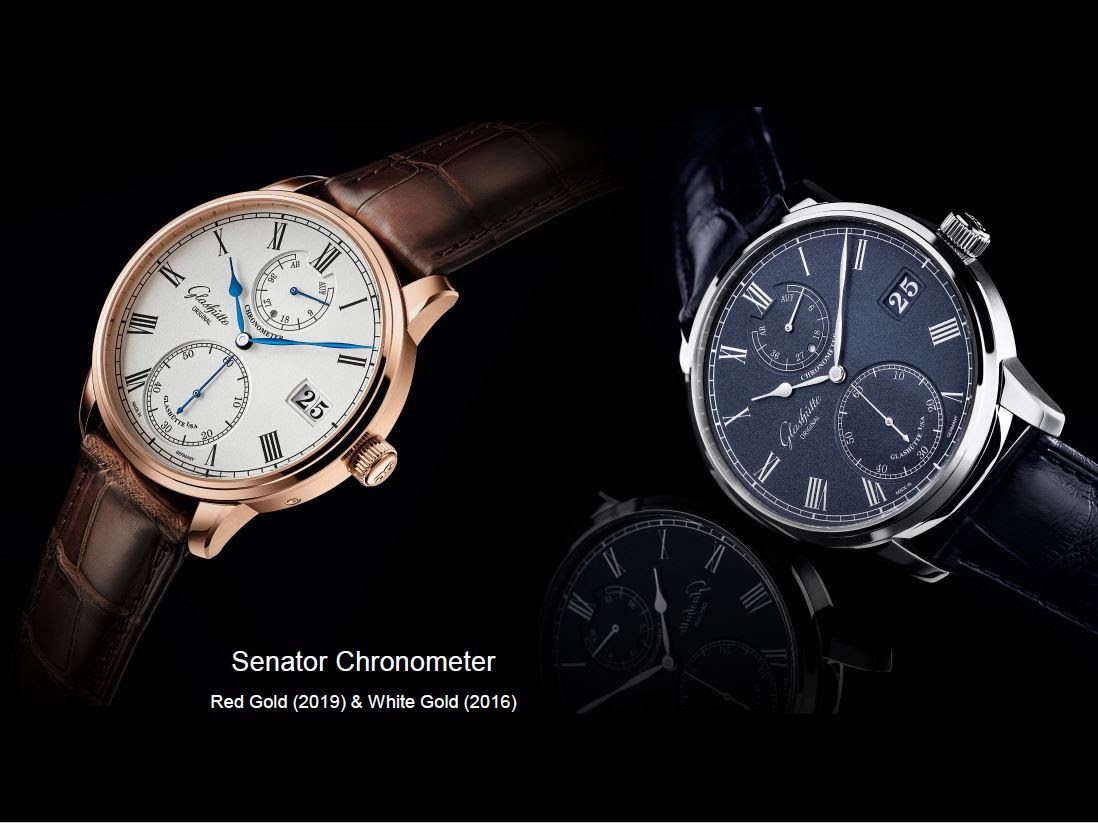 The blue dialed one with a diameter of 40 mm and I would've already own one.

Give me arabic hours markers and I am totally in. [nt]

I have considered this too! I would love it. [nt]