Girard-Perregaux Sea Hawk for over seven decades, what I have collected so far 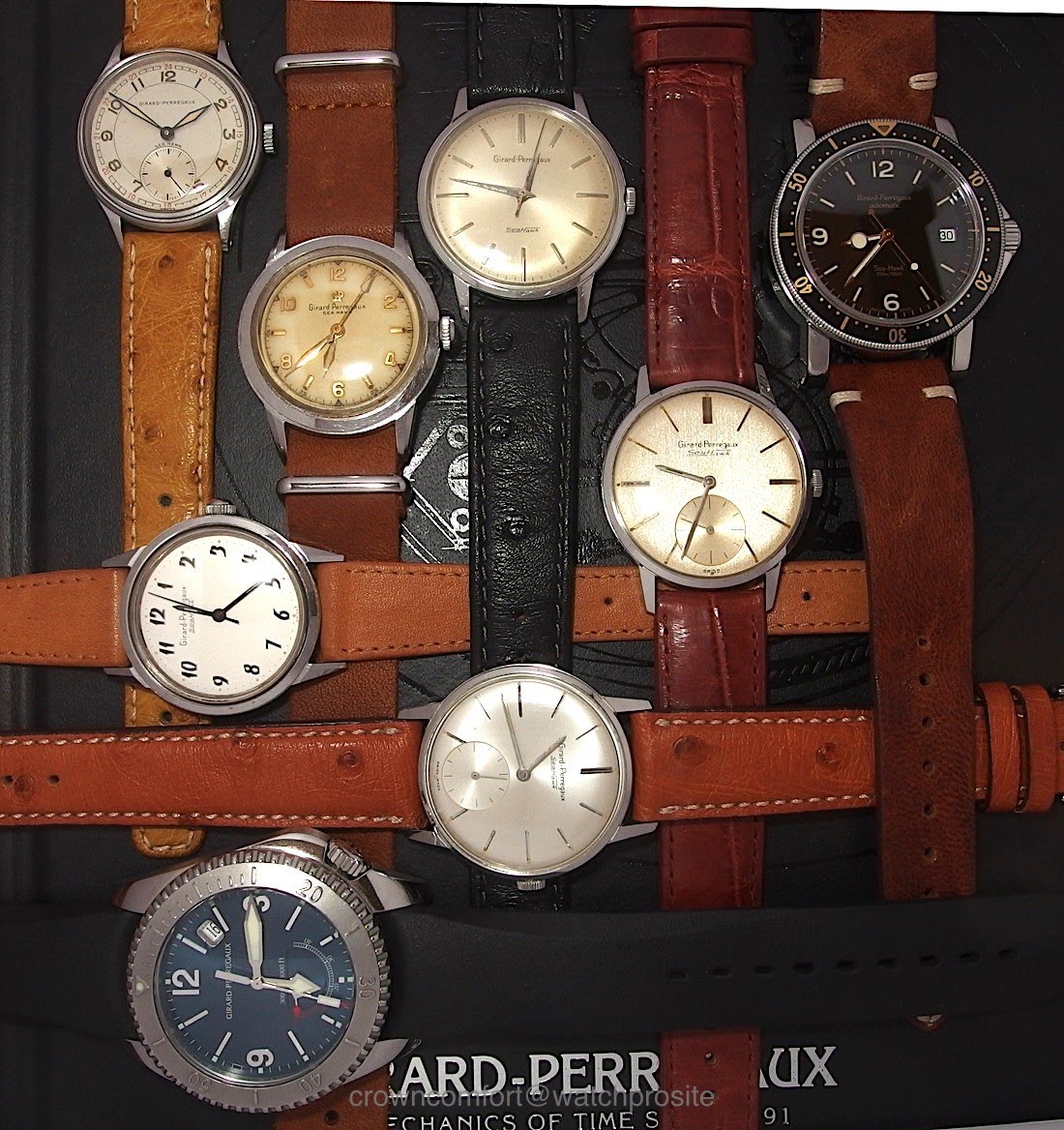 Let’s have a closer look at the Sea Hawk family from GP. As the name gives it away, the “Sea Hawk” has some connection with water, but as the Sea Hawk as a model dates back all the way to the 1940s, you should not expect that those early Sea Hawks were any kind of a Diving watch. There was a sister model from around the same time, the Sea Scout and both the very early Sea Hawk as well as the Sea Scout claimed some basic water resistance and given the times, had more of a military theme then a Diving theme. 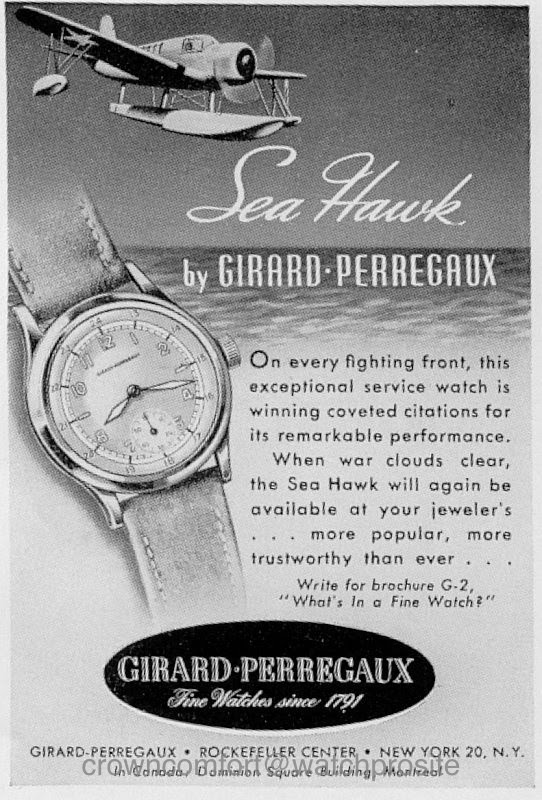 The Sea Hawk is probably the one model from GP that had the most radical transformation over a period of well over 70 years. Starting of as a basic slightly ruggedised military watch, becoming then a simple, manual wound time-only dress watch, to going back becoming a collection of Diving watches, all the way to extreme depths of 3000m.

Now we should also mention the Deep Diver that saw the light in the late 50s and continued to be GPs first real Diving watch till the 70s, but then vanished as a model to bring back the Sea Hawk Diving watch at the end of the 80s.

So to put them into chronological order, it would look a bit like this:

As today we do no longer have a Diver model in the collection, it will be interesting to see when we will see a Sea Hawk IV or perhaps even the resurrection of the “Deep Diver”. I’m fairly convinced that GP needs an entry level Diver model and giving its rich history over seven decades, this should fit very well into the collection even though brands understandably trying to consolidate their collection.

Let’s start with the beginning and a closer look on all Sea Hawks I have so far in my collection. The first Sea Hawk was a child of its time in the 1940s. Typical style with radium numbers and filled hands in a small case of around 31mm. Today they are quite hard to find in good condition as many had lived a rough life.  Here are two, one in average and one in excellent condition with great little red detail. 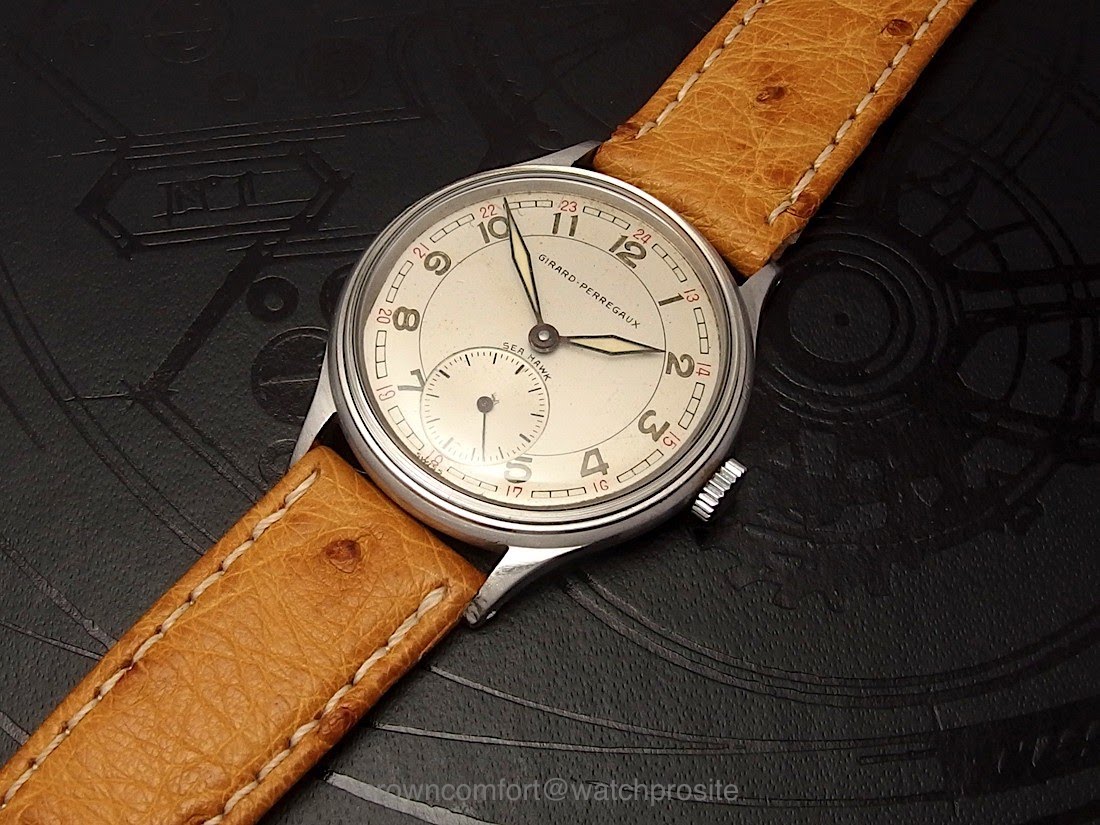 Moving on to the 50s, we have seen some Sea Hawks that kind of fits no particular style. It is however typically 50s, still a small case with 32mm but appearing much larger than its cousins from the 1940s. ETA-based manual wind movement and often the dials have developed a nice patina, like mine with its yellowish cream colour. 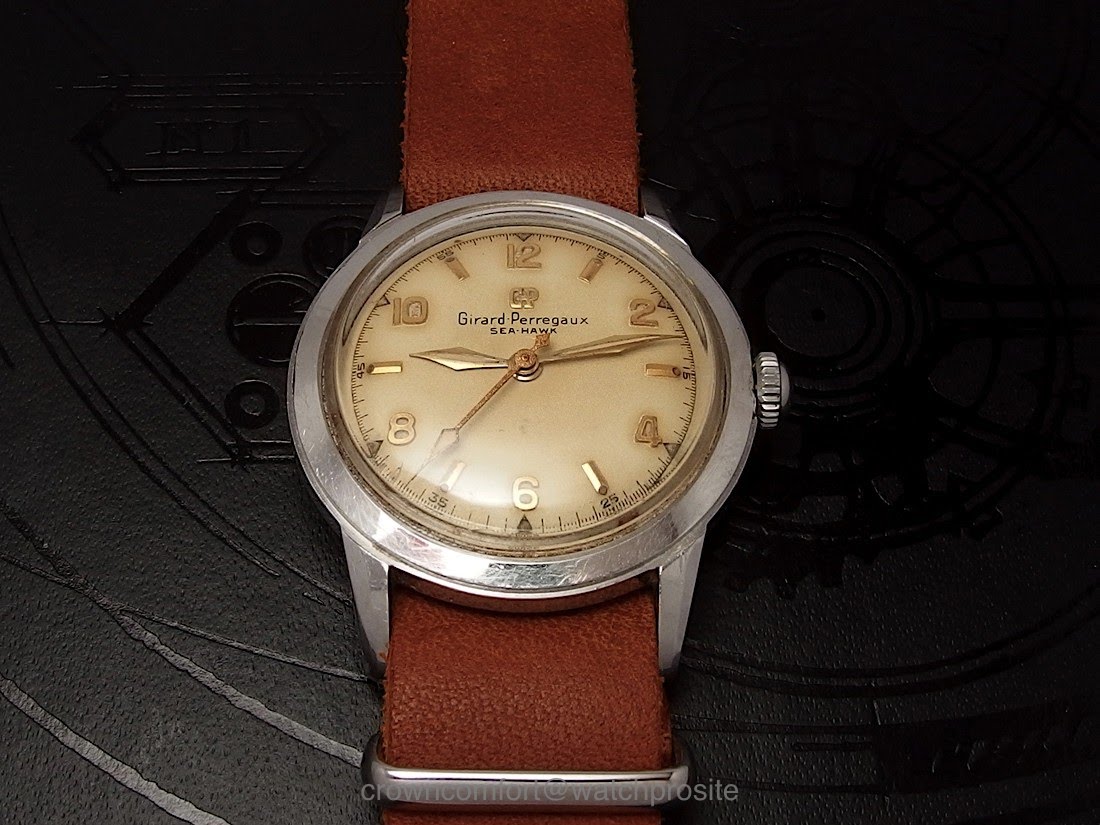 Moving into the 1960s it gets more interesting. The “Sea Hawk” now really just became a badge without meaning as the watches are mostly dress style, time-only with manual wind. 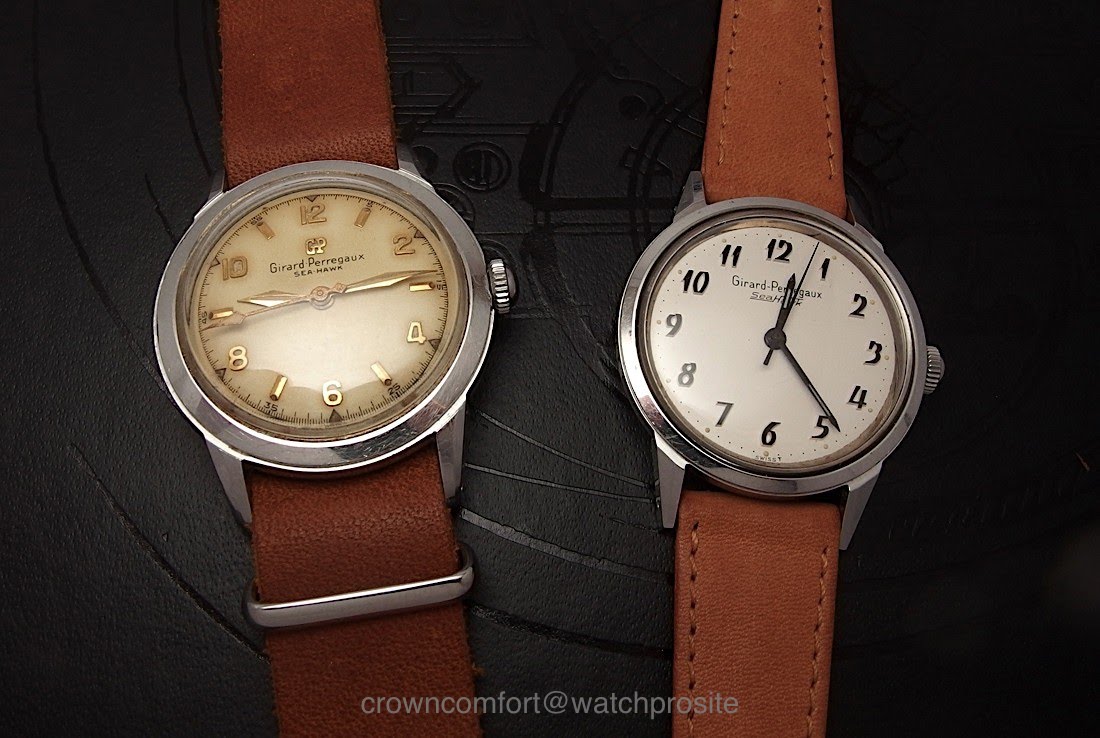 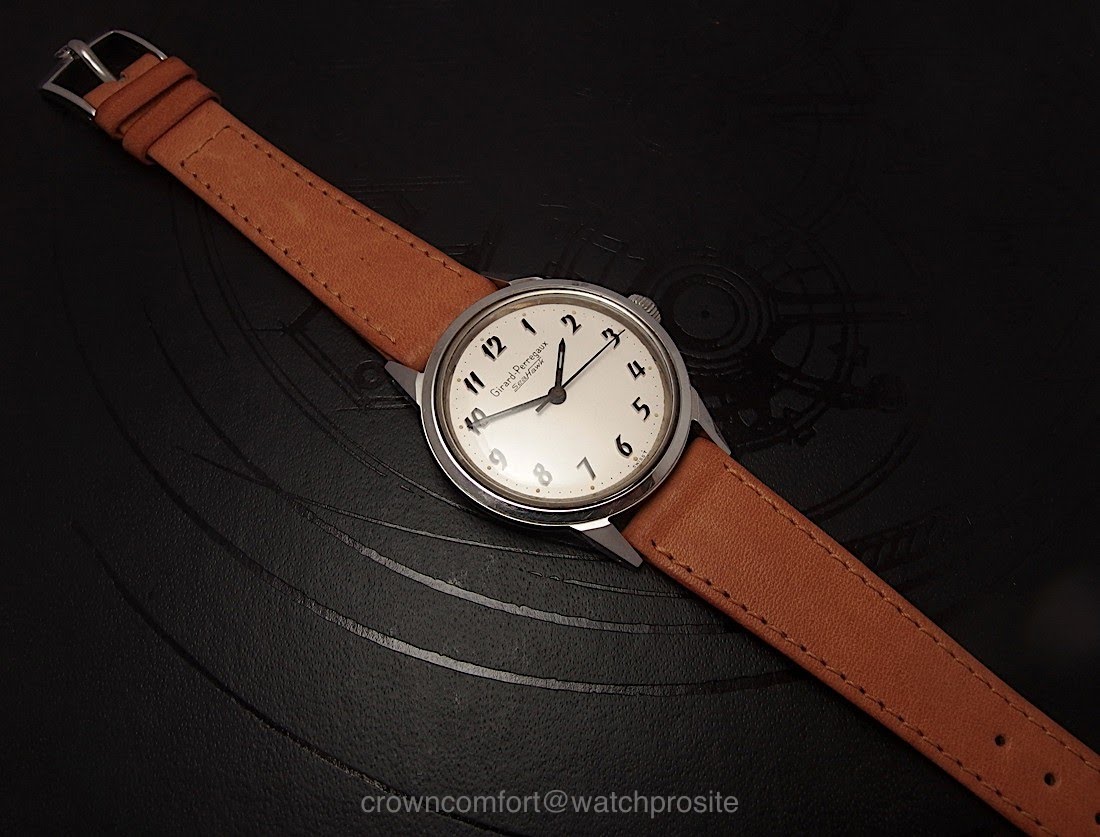 Typically sunburst dials with either small seconds or central seconds, thin cases around 33-34mm and 18mm lug size. The lugs typically are thin and underline the dial, which makes them look bigger on the wrist than they are.

There was also a wonderful linen dial with small seconds. 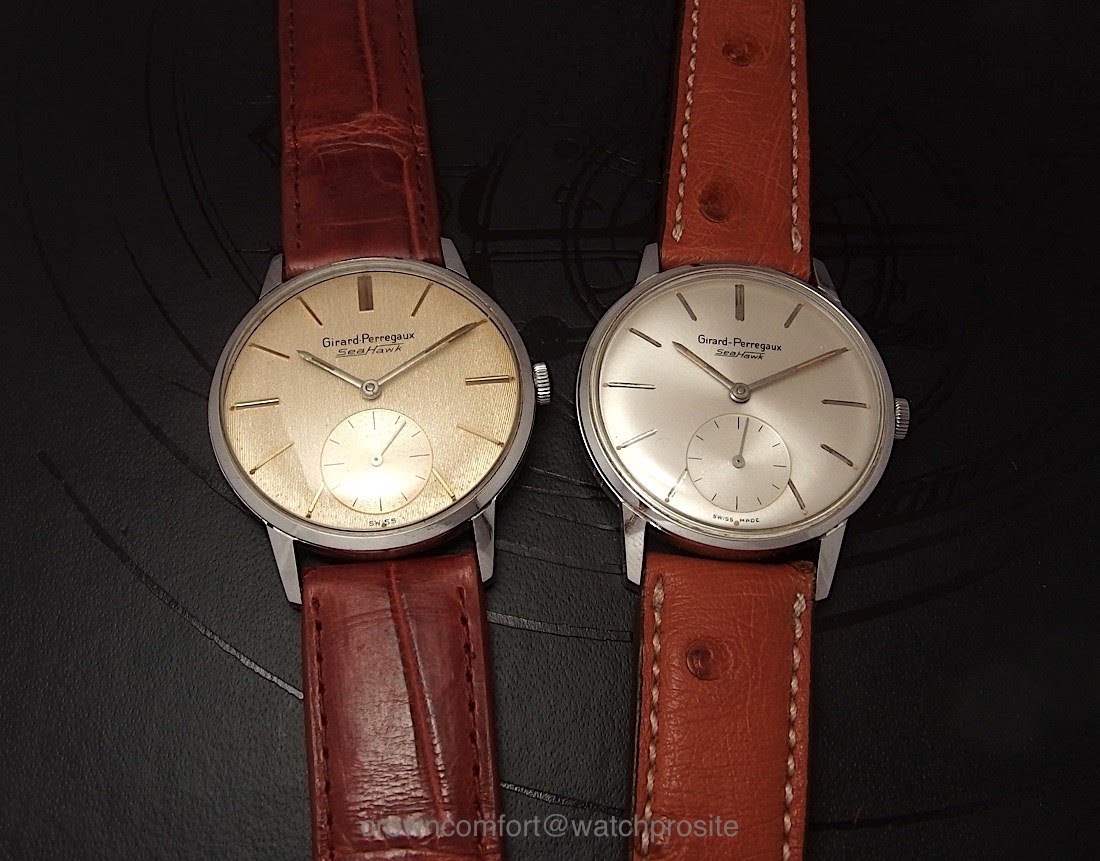 Inside you can find Caliber 12, 18 or 30, based on an AS caliber. You can easily find 1960s Sea Hawks in good and very good condition and they make a perfect entry into vintage GP. They are easy to service, reliable and accurate and surely have a classic 1960s vintage look. 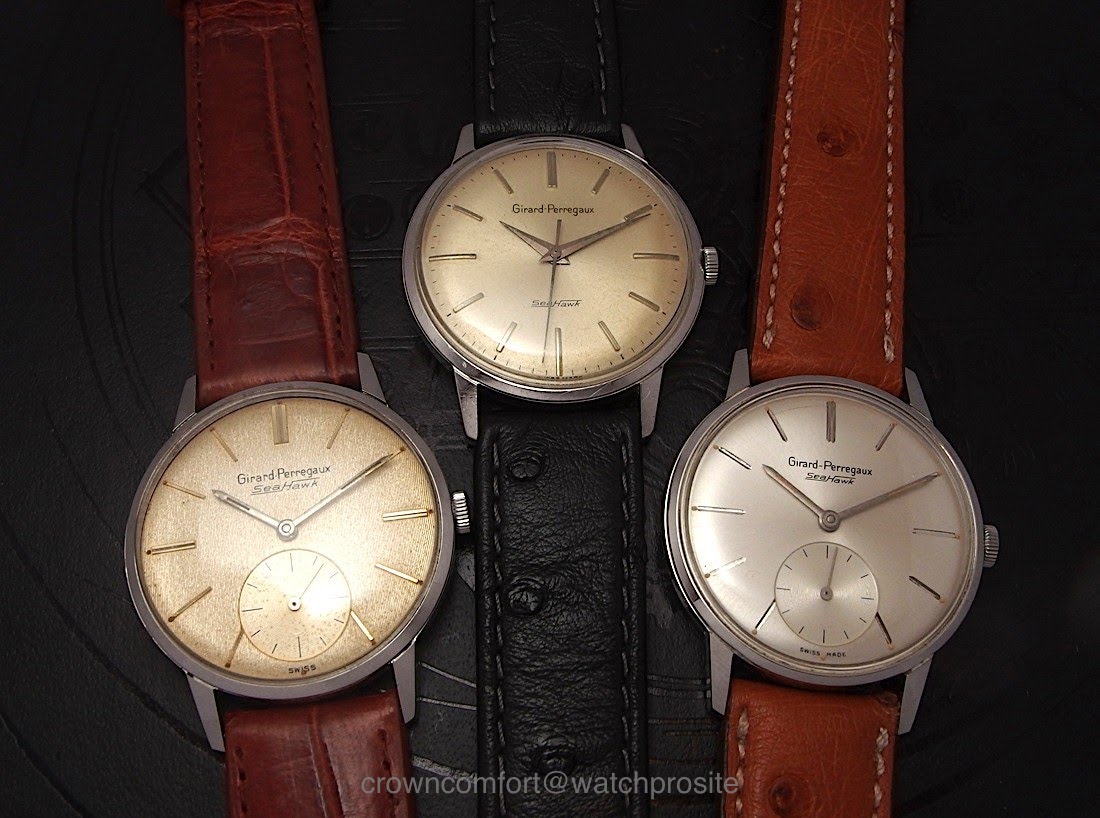 Let’s take a quick break before we move on to the Diver generation of Sea Hawks and have a quick look at the Deep Diver family that started in 1957 with the first generation.

The Deep Diver family is a subject on its own so I will not go into much detail here but wanted to add them for completeness. They are important in the context before the Sea Hawk became the primary branding for Diving watches from GP. 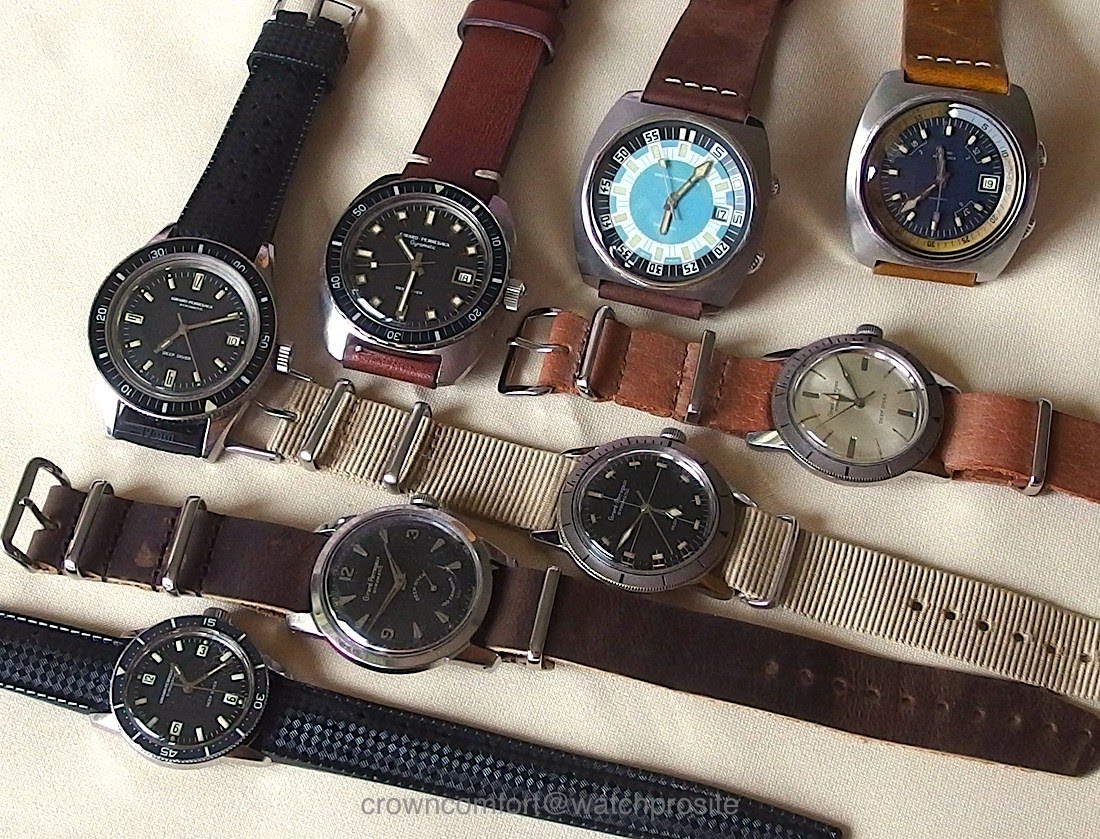 After we slowly came out of the dark ages of the 1980s, in 1989, the Sea Hawk came back into the collection and this time being a true Diver watch. It was the first Sea Hawk with an automatic movement which should be the first choice for a Diver watch, featuring a rotating bezel and screw-in crown. It also had a sapphire crystal. 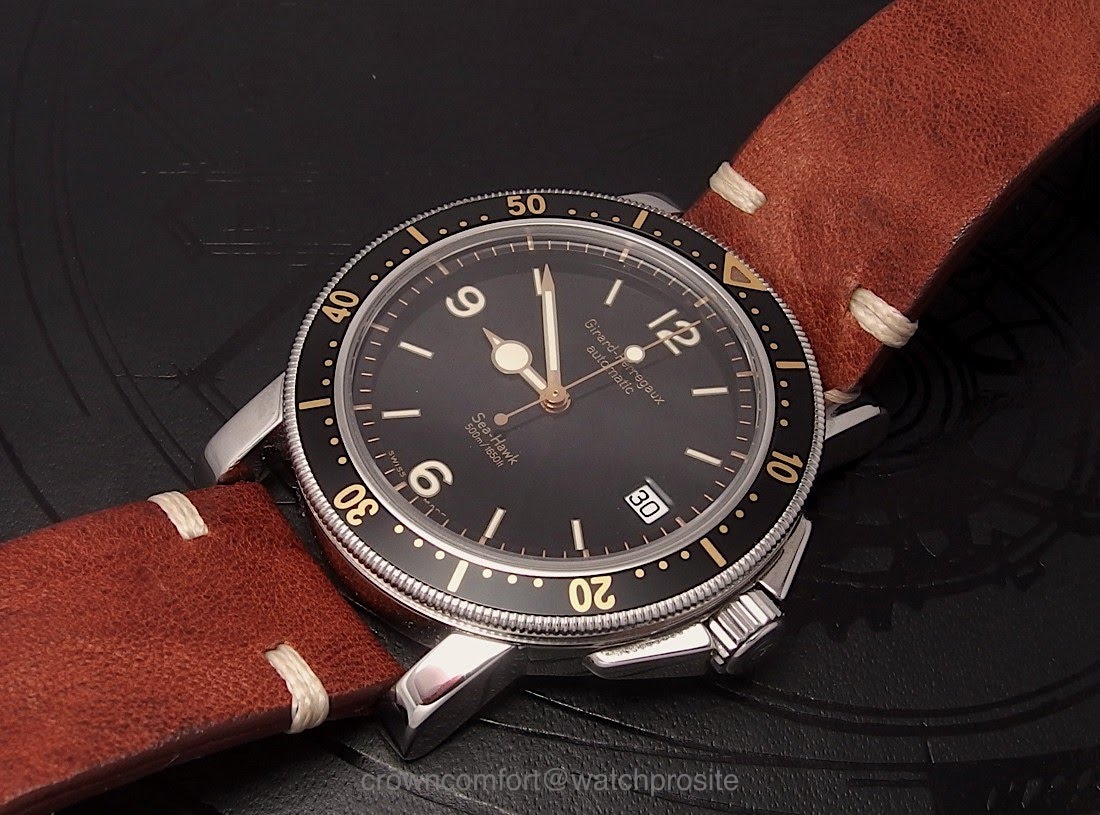 44mm Sea Hawk Pro in Steel with 1000m WR and Helium Valve, in black or white and special editions

In general, the Sea Hawk II was very successful and produced in large numbers. It presents today a perfect opportunity to enter to a modern GP Diver watch with great value and a large selection of styles where you surely can find one that suits. My personal preference is the 40mm version as it best fits my wrist and the Steel Case for me is the most versatile and fitting to a Diver. 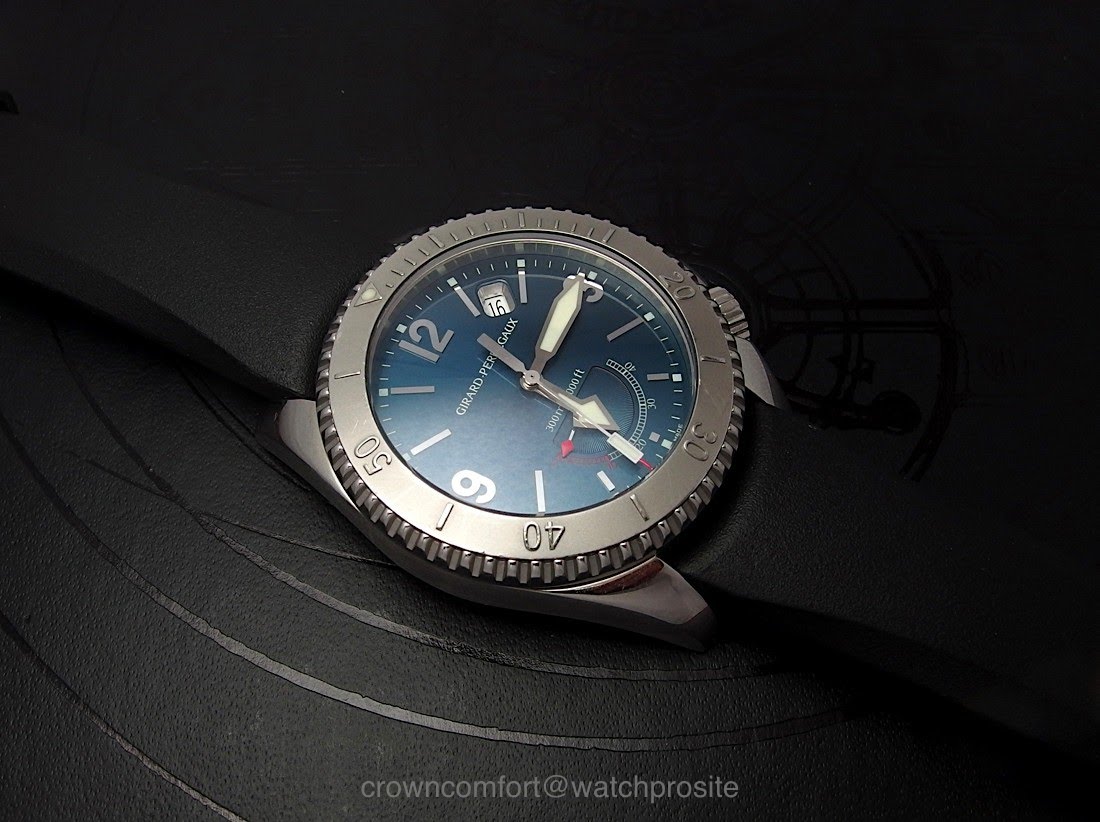 Finally, we saw the 3rd generation evolving from the Sea Hawk 2. It kept the typical crown position at 4:30h but the case grew to 44mm with no smaller choice and a more edgy design. The strap is now closely integrated into the case and it had a new deployant clasp. All 3rd generations had a helium valve and a 1000m WR. The Sea Hawk III was not long in production and since stopped production no Diver watch is now in the collection.

Girard-Perregaux Sea Hawk for over seven decades, what I have collected so far

By: crown comfort : December 7th, 2018-04:47
Friends, Let’s have a closer look at the Sea Hawk family from GP. As the name gives it away, the “Sea Hawk” has some connection with water, but as the Sea Hawk as a model dates back all the way to the 1940s, you should not expect that those early Sea Hawk...
login to reply

This is going to be frightening [nt]

It's a predator bird...no escaping. [nt]

What a read. Thanks, CC.

Thanks for sharing CC

Thanks for the kind words, Mahesh.

By: crown comfort : December 7th, 2018-13:05
The Sea Hawk with the numerals is really special, those numerals were available on a few models.
login to reply

What a line up! You must be very proud to have achieved that collection. The first one is such a sweet candy, but the dress style one is also one of my favorite Impressive! [nt]

By: Ares501 - Mr Green : December 7th, 2018-06:20
Amazing post and collection. First Sea Hawk is just my taste and you have one in superb condition. Superb post but one thing is missing in Deep Diver photo . Cheers D
login to reply

True, I cannot claim completeness for the Deep Diver shot, but this is getting fixed by a good friend ;) [nt]

Love the GP's... such an under-appreciated brand. Thanks for the eye candies. [nt]

Absolutely, but then not everyone wants to be Mr. Popular. :) Thanks for your kind words. [nt]

Wow, I just went through a terrific history lesson on seahawk model.

Many thanks! glad you enjoyed reading it. [nt]

By: info147 : February 25th, 2019-14:47
Hi CC, I am a relatively new user. Relatively because I have been watching the watchprosite with all the awesome wristwatches for quite some time but now it is the first time I write down here. I am very impressed of your sea hawk report. So much competen...
login to reply

Thank you for your kind words and a warm welcome here

By: crown comfort : February 25th, 2019-22:08
With regards to the early Sea Hawk. I'm fairly certain that the print on mine is original and those numbers were red. I have seen an exact same like this a few times with the same configuration which is also a good indication. That does not mean that grey...
login to reply

By: info147 : February 26th, 2019-05:13
Thx a lot for your feedback and the opportunity to share the early Sea Hawk for the USA market. I prepare a picture with all components because in the moment I do a service and so it's ideal to have a deep dive into. Everything in my understanding is orig...
login to reply

I think you have the right conclusion, I believe the red has faded to grey. Thanks for sharing. [nt]

Hmm...could it be a good idea to repaint (ONLY the little numbers) in red? Of course by a professional. May I ask you again for your point of view. Thx in advance. [nt]

I would refrain from the attempt of repainting the dial. It has aged in this way and it is much better to leave it like this

By: crown comfort : February 26th, 2019-13:39
from my experience (and I have been there) repaint will always leave you dissatisfied even when done by a professional. Best, CC
login to reply

That's exactly what I'm worried about, too. Thank you very much for your clear point of view. See you. Best, Frank [nt]

By: playspace : June 17th, 2020-10:00
Hi, I am brand new to this website. My introduction to the site was your wonderful five part essay on GP's from the 1990's, particularly the essay featuring the Sea Hawk and GMT Traveler. To be honest, I have been challenged figuring out how to navigate t...
login to reply