The Mille Miglia race celebrates its 90th anniversary and Chopard, as a major partner of the event could not miss the opportunity to celebrate this venerable milestone. Contrary to common beliefs, the race, as it is configured nowadays, is not a pleasant ride behind the wheel of historic and classic racing cars on charming Italian roads. Mixing regularity tests with journeys on roads open to traffic, it requires from the competing teams a concentration at all times and a great physical condition, the stages length causing nighttime arrivals.

That is why in order to respect this spirit mixing charm and physical performance, the watches from the Mille Miglia collection are usually versatile with details borrowed from the automotive world such as the counters, the rubber strap pattern or the peripheral scale. Comfortable on the wrist, legible thanks to luminescent elements, resistant due to the use of steel cases and reliable automatic movements, the Mille Miglia watches have the aim to accompany their owners at all times. 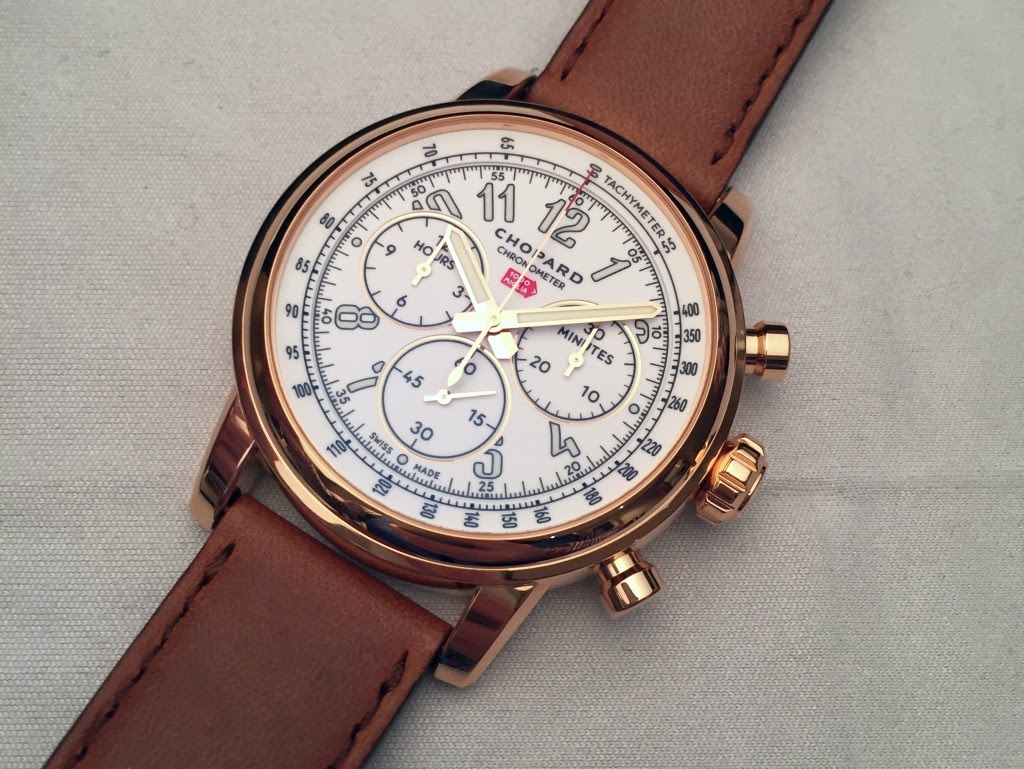 Let me be clear: the watch which celebrates the 90th anniversary is not made to get your hands dirty. It is however much more at ease in the cozy setting of the Automobile Club, with a cigar and a glass of cognac. Because the score played by the Mille Miglia Classic XL 90th anniversary, released in the context of a limited edition of 90 pieces, is more exclusive and refined than the regular watches in the collection. Yet, and this is what explains its interest, it doesn't deny its origins. By putting it on the wrist, I found again the same feelings of volume, of proportion than with the Race Edition 2016 chronograph. However, three major elements distinguish it from the latter: the case material, the removal of the date window and the movement.


The main symbol of the preciousness of the Mille Miglia Classic XL 90th anniversary is the pink gold case. Precious but not delicate! In fact, the case has an imposing size due to its 46mm diameter, amplified by the prominent mushroom pushers and the wide crown. The watch thus has a powerful character without being perceived as excessive. Thus, the dominant white color of the lacquered dial mitigates the visual impact of pink gold. The good news about the case is that the very curved lugs allow proper positioning on the wrist ... if it is large enough! 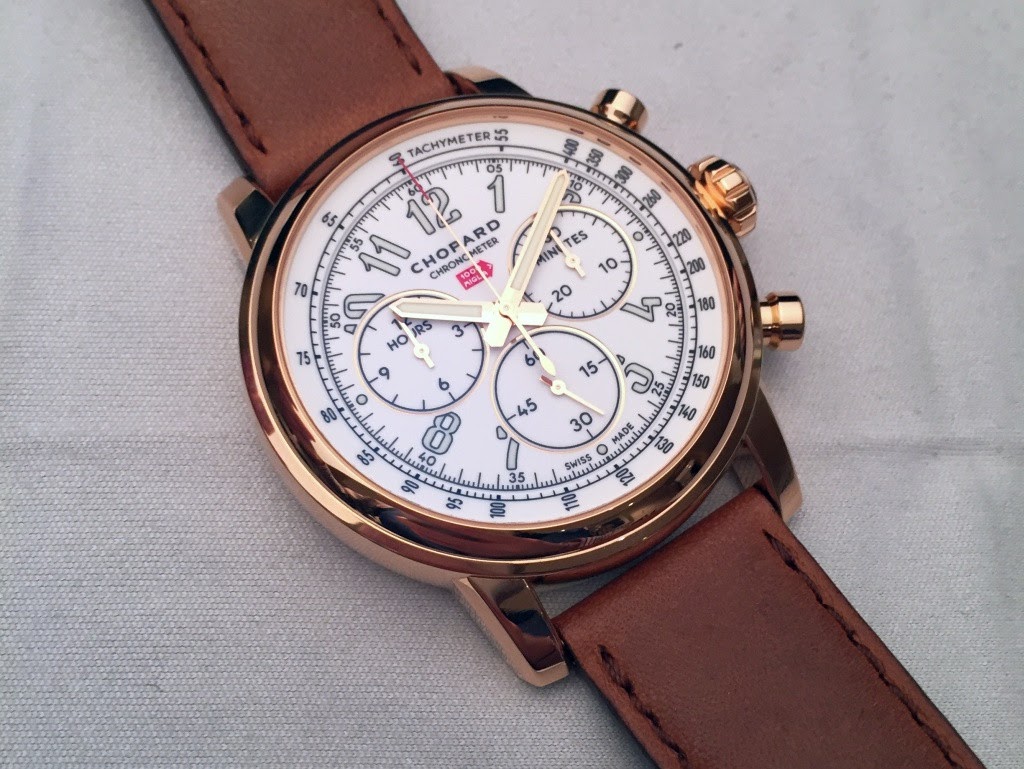 I like a lot the dial of this watch. While it is very similar to the Race Edition 2016, it seems to be better "spaced-out" at least to my eyes. This is paradoxical because it contains almost the same information. But the light color causes this visual effect and everything seems to better "breathe". The counters are large and easy to read and the tachymeter scale positioned on the peripheral flange does not interfere with the overall legibility. The numerals could have been removed for a lighter design but they are part of the Mille Miglia style and so they are mandatory. It is for the same reason that I find appropriate the logo of the race that gives a little touch of color on the dial and makes the watch less formal. 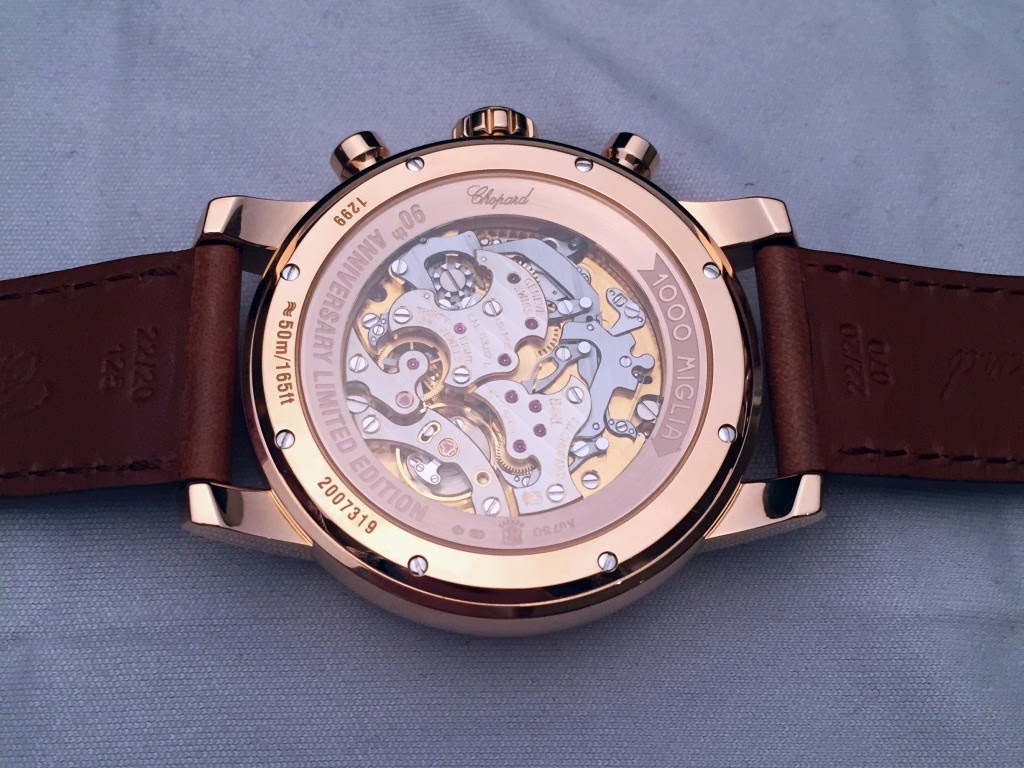 But the good point on the dial side is without any doubt the removal of the date window. Finally! And what a relief... I thought that the Race Edition 2016 suffered from the presence of this window wedged between two numerals. The Mille Miglia Classic XL 90th anniversary is dedicated to a different audience, to collectors and connoisseurs for whom the date window is more considered as an obstacle than an asset. Chopard has taken through this choice a great decision and I'm very happy with it.


The exclusivity of the Mille Miglia Classic XL 90th anniversary is also embodied by  the use of the flyback chronograph movement with manual winding LUC 03.07-L1. This movement is very well known since it has already powered the LUC 1963 chronograph and the limited edition for Purists. It has a very original and unusual architecture that comes from its origins based on the automatic movement of the LUC Chrono One. It remains very pleasant to watch, being done with care and respecting the criteria of the Geneva Seal. I love the contrast between the bridges, the moving parts and the mainplate with perlage. I would however have appreciated  that the two main bridges have more subtle shapes. Moreover, it is a bit small for the case but it is not felt dial side (what is the most important). 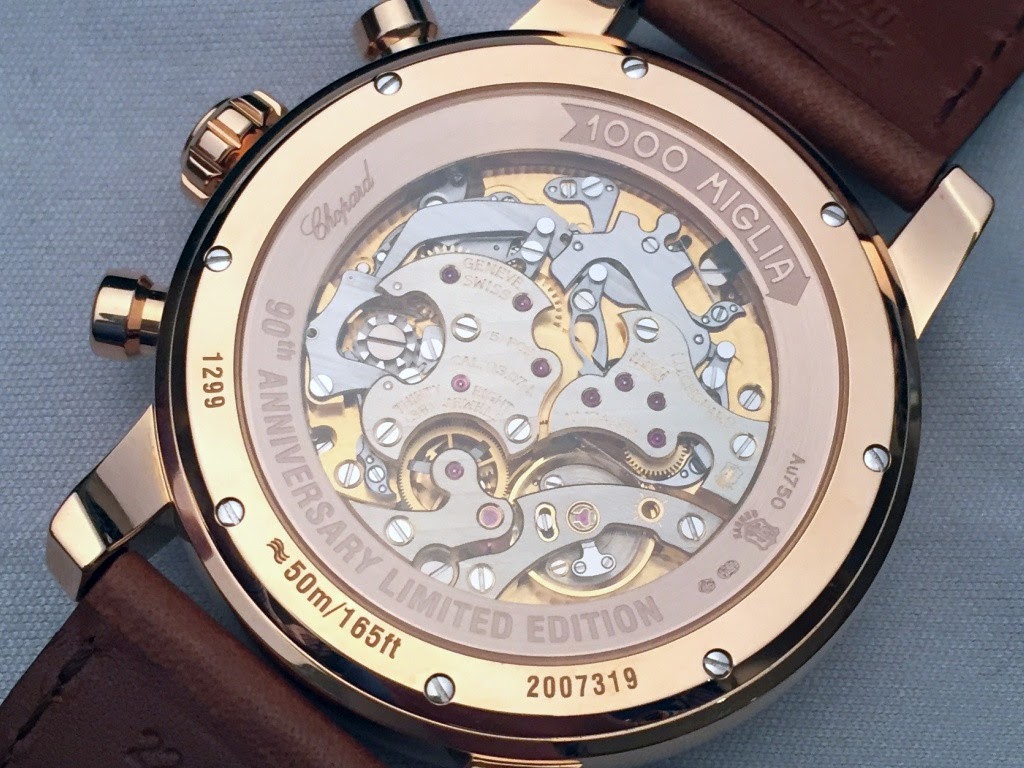 Its technical performance is fine with a power reserve of 60 hours for a 4hz frequency without forgetting its chronometer certification. But its strength lies in the pleasure it provides on the daily use. The behaviour of the pushers is well adjusted and the size of the crown allows a nice winding experience.


At first glance, the Mille Miglia Classic XL 90th anniversary seems to hesitate between the sporty watches world and the classic watches one. It finally managed to reconcile these two sides through a timeless but imposing design. The removal of the date window compared to the Race Edition 2016 and the use of a handwind movement are relevant choices that bring a lot to this watch. It therefore seduced me thanks to its presentation and the quality of execution. Its size makes it difficult to be worn on each and every wrist but after all, it is aimed primarily at connoisseurs who are also drivers of beautiful and powerful machines. It is the reason why I'm convinced that Chopard has celebrated in a  beautiful way the 90th anniversary of the "corsa più bella del mondo". 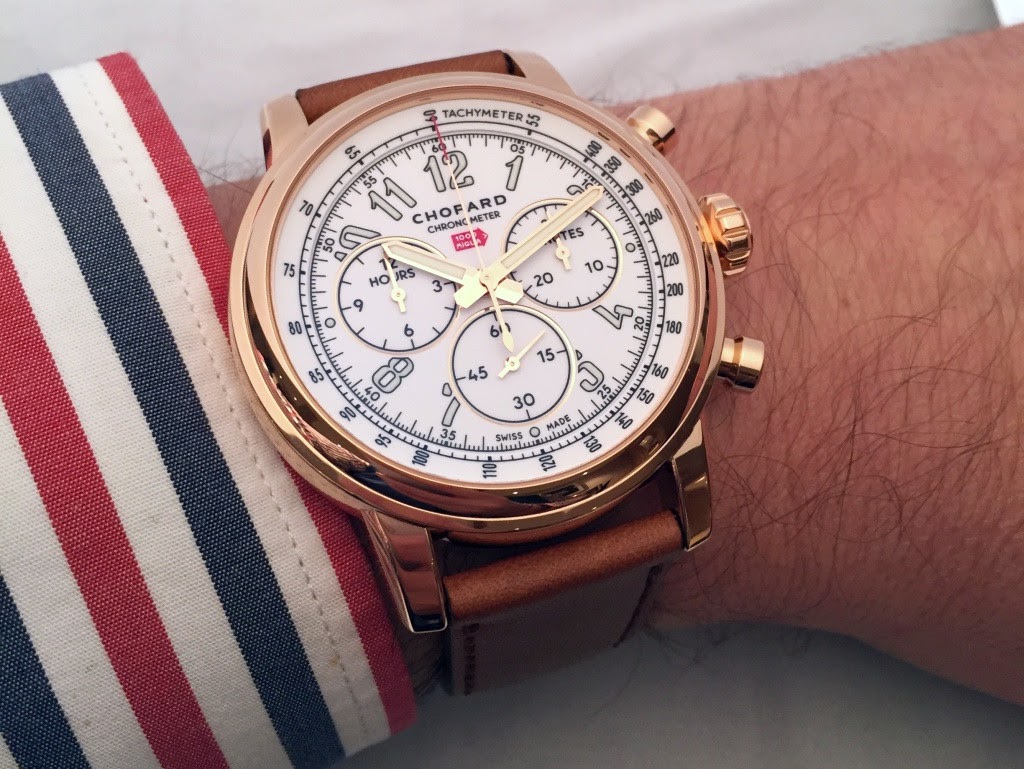 Pros:
+ The finishes
+ The removal of  the date window compared to the Race Edition 2016
+ The pleasure brought by the LUC handwind chronograph movement
+ The incarnation of a style neither too formal nor too sporty

Cons:
- The case size doesn't fit all wrists
- the architecture of the movement doesn't hide the fact that the starting point is an automatic caliber

By: foversta : June 4th, 2017-14:26
The Mille Miglia race celebrates its 90th anniversary and Chopard, as a major partner of the event could not miss the opportunity to celebrate this venerable milestone. Contrary to common beliefs, the race, as it is configured nowadays, is not a pleasant ...
login to reply

Great article, Fx. Thank you for the unbiased review, it is much appreciated.

By: MichaelC : June 4th, 2017-15:56
About the watch, I fully agree the exclusion of the date is the proper design decision. As for the size, I feel I can wear it OK, but it would have been easy to reduce it 2-3mm by simply streamlining the inner tachymeter. I see how this wide ring echoes t...
login to reply

I've never tried a 46mm Chopard watch, so I don't know how it fits.

Thanks for this wonderful review!

By: KMII : June 4th, 2017-22:27
An it is a thoroughly appealing watch - the second one with this movement without the date (only the Purist one before lacked it - the regular 1963 had it). If I had one wish it would be for a smaller case. The movement fits perfectly fine into a 42mm cas...
login to reply

More exclusive movement than we think

By: MTF : June 5th, 2017-04:06
FrX, Thanks for the on-wrist review in your own time. It's too busy at Baselworld to get much time with each watch. Actually this manual wind dateless chronograph movement is more exclusive than we think. The regular rose gold L.U.C 1963 Chrono was powere...
login to reply

Thanks for this great review and the reminder that Mille Miglia is a long and grueling race. [nt]

When excitement makes you smile

By: kolosstt : June 8th, 2017-23:43
When this watch was announced, I was pretty excited to see this model in this previous metal but most of all with this movement. All in all a true example to commemorate this 90th anniversary. While I like the idea of having such marvel as movement in thi...
login to reply