Louis-Ulysse Chopard and Karl Scheufele I were born in different countries and 40 years apart but their life spans overlapped by 38 years and their descendents and businesses were destined to meet in the 20th century. The Chopard family lived in Sonvilier, a village of the Swiss Jura, while the Scheufeles stayed in Pforzheim in the Black Forest region of Germany. 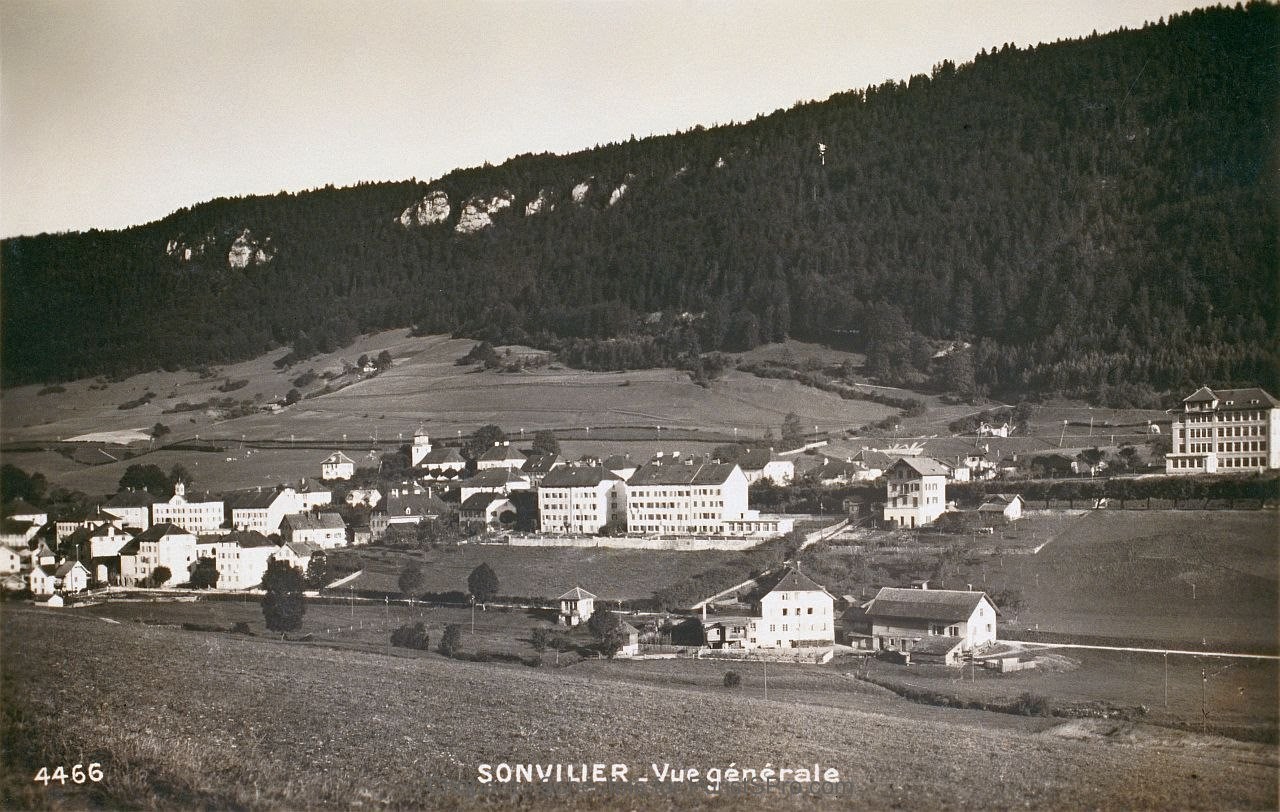 
Félicien Chopard (1804 – 1887), a farmer descended from bee-keepers was a traditional man but he encouraged his sons to learn watchmaking. Farmers supplemented their income during the fallow winter by making watch movements. Félicien married Henriette Marchand (1807 – 1879) and had four sons: Jules-Edmond (1833), Louis-Ulysse (1836), Paul-Virgile (1838), and Arnold-Adémar (1842). 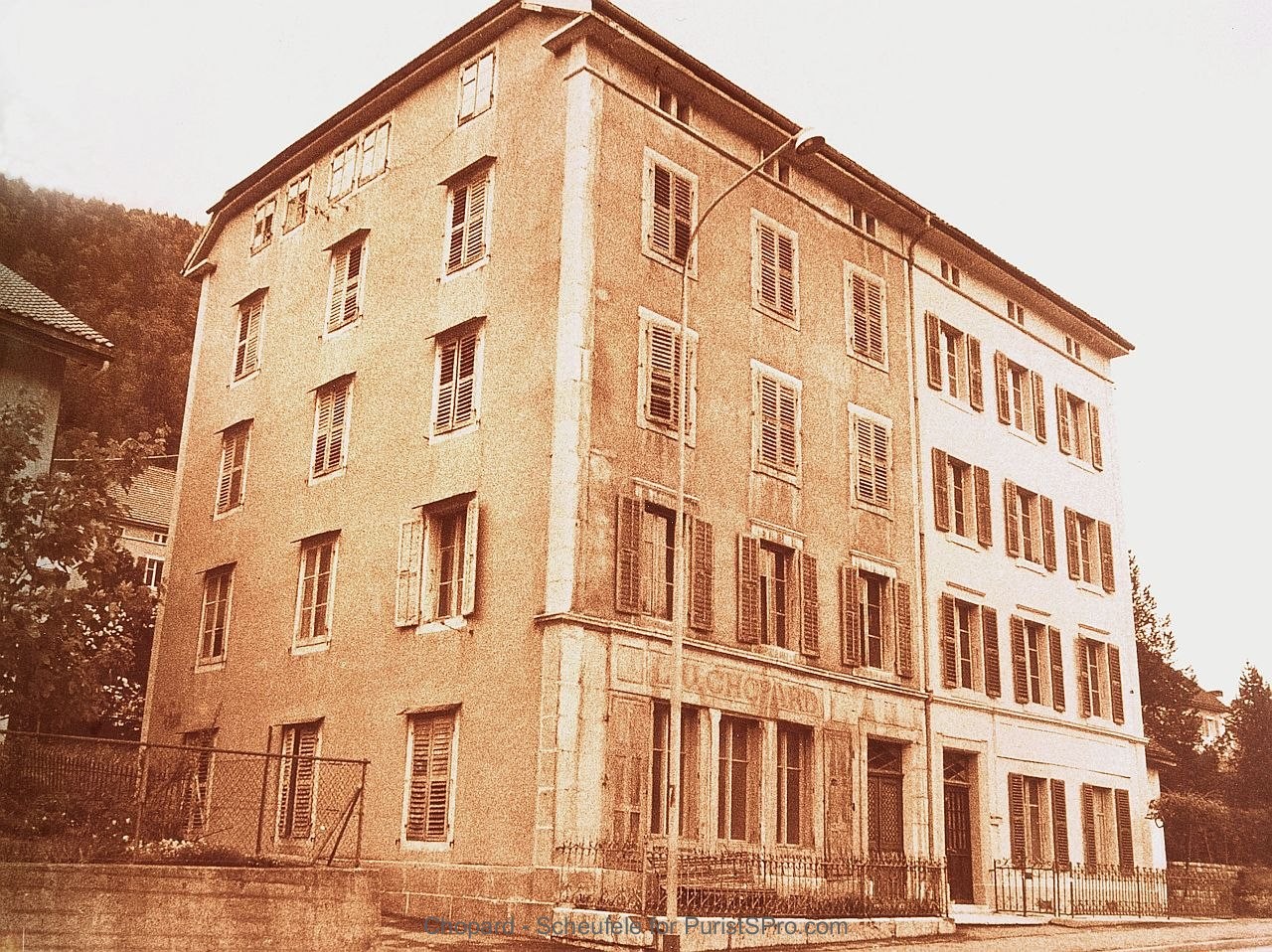 House in Sonvilier where Chopard company was founded in 1860. (Photo from 1900s)

Louis-Ulysse born on May 4th 1836, showed a particular prowess in watchmaking. The aspiring Louis-Ulysse figured out that it was the “comptoirs” or watch dealers who earned the greatest profit by buying the cheap assembled movements. Each Spring, these agents collected them and cased them up before marketing the finished watches. There was more profit to work independently; hence in 1860, at the age of just 24, Louis-Ulysse formed his own L.U.C watch workshop in Sonvilier. 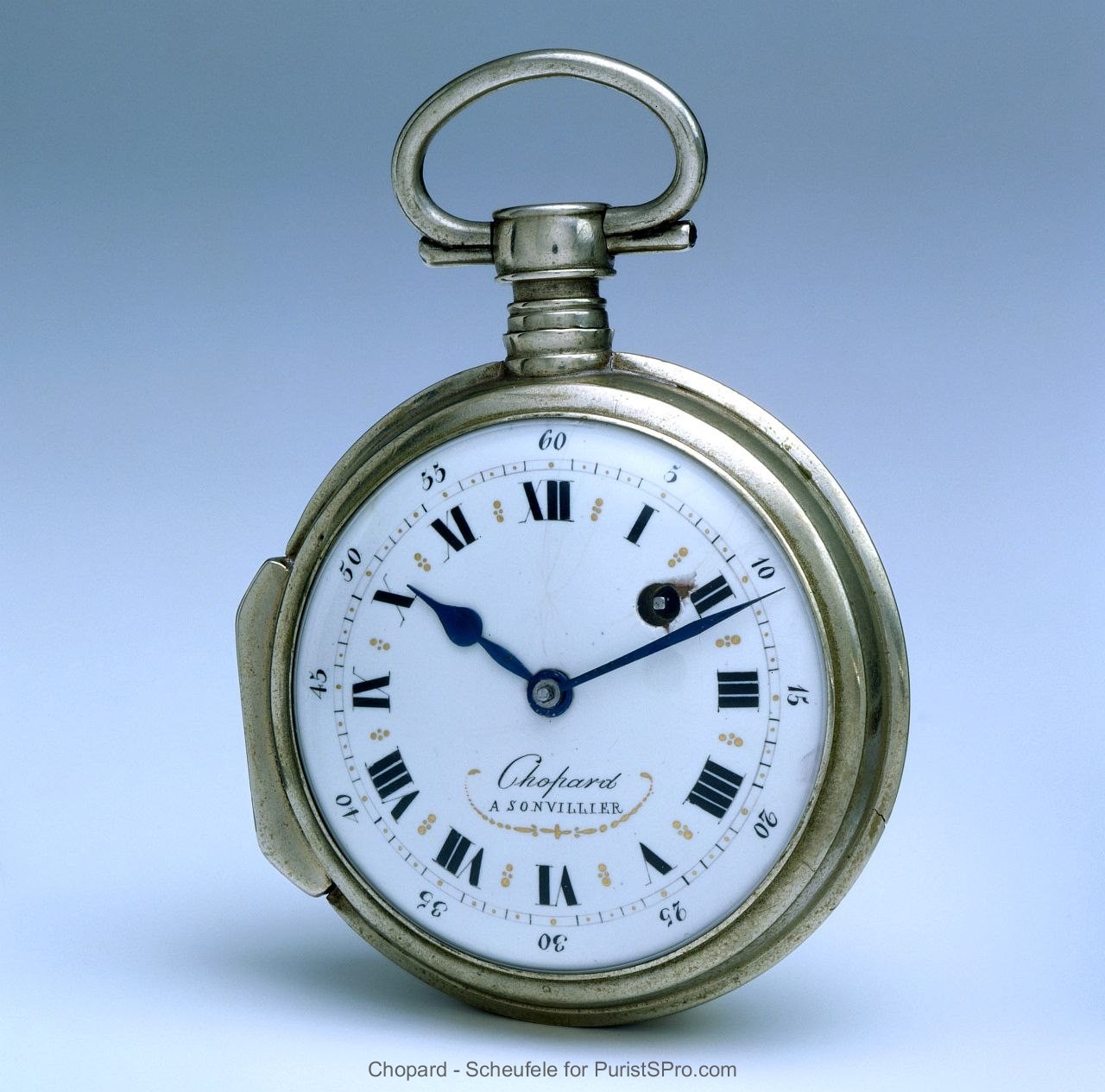 One of the first Chopard pocket watches from the 1860s 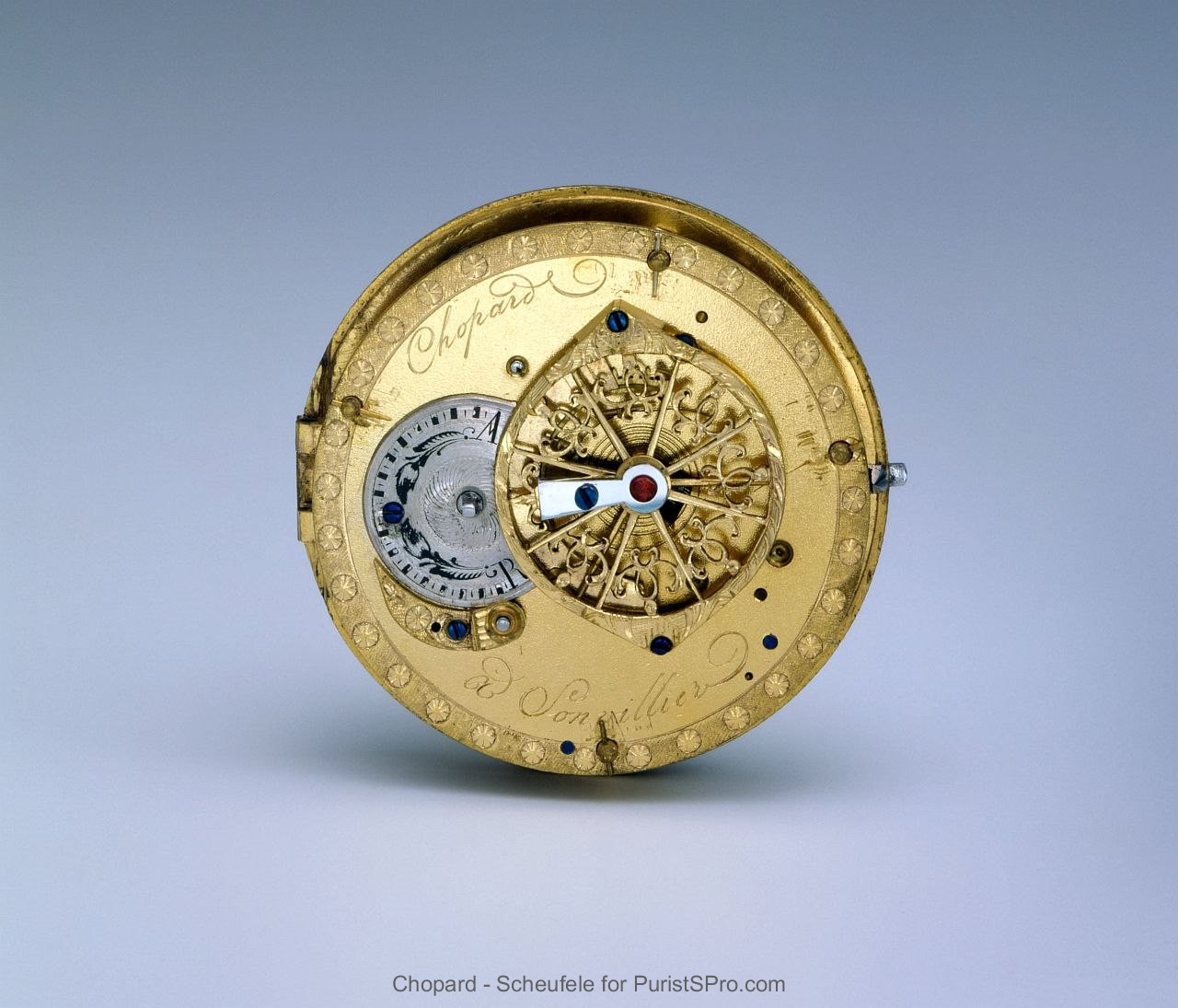 Movement of one of the first Chopard pocket watches

Even before 20th century marketers started to exhort being “first, unique and different” to stand out from competitors, Chopard specialised in making innovative precision watches with elegant decoration.

Monsieur Chopard visited customers in Russia, Eastern Europe, and Scandinavia to show its finest creations, and the Tsar of Russia became a loyal client. 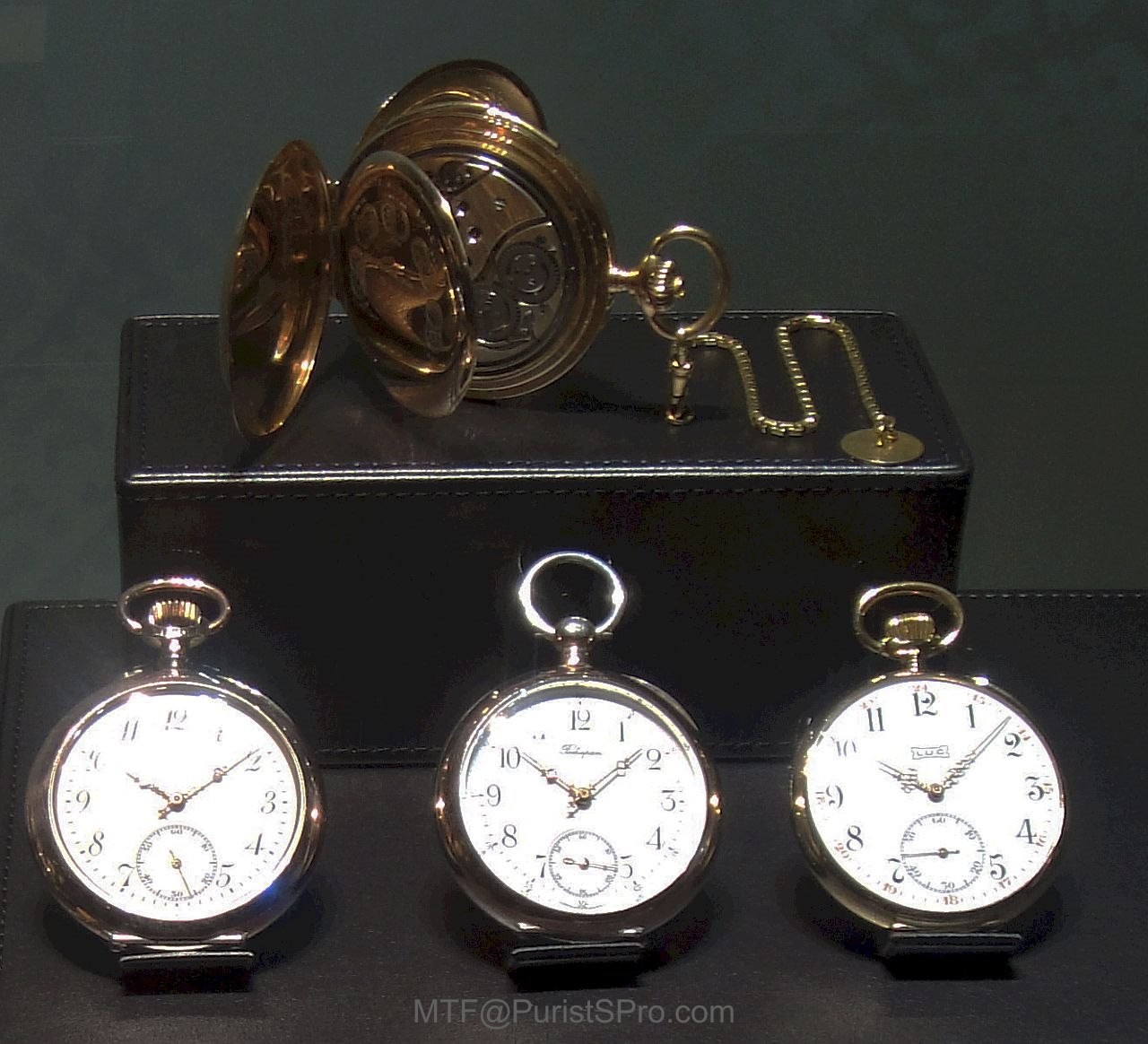 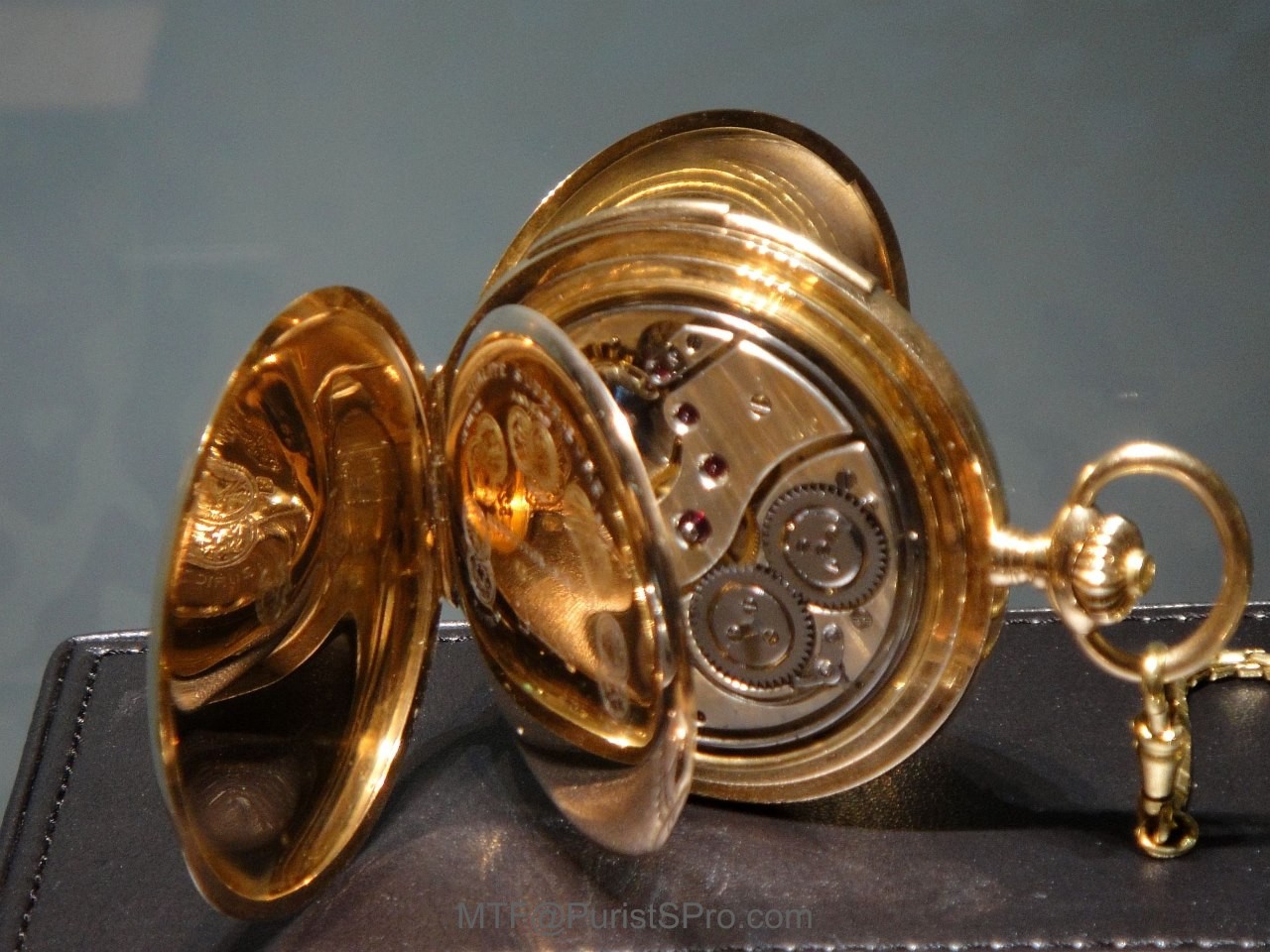 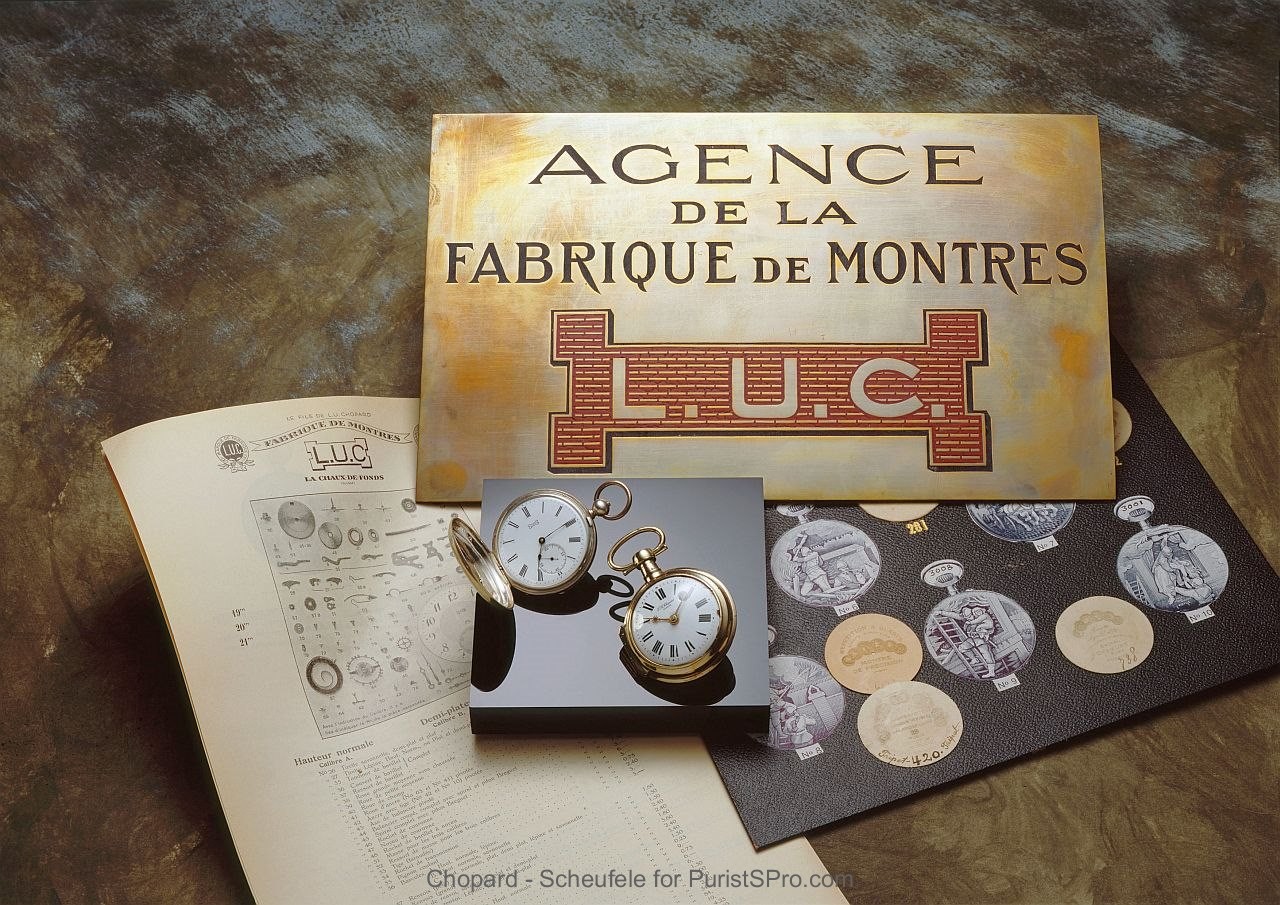 L.U.C name plate
Old name plate, list of watch components and a sketch sheet for the famous embossed back of the pocket-watches. In the foreground: two old watches marked “Chopard”. 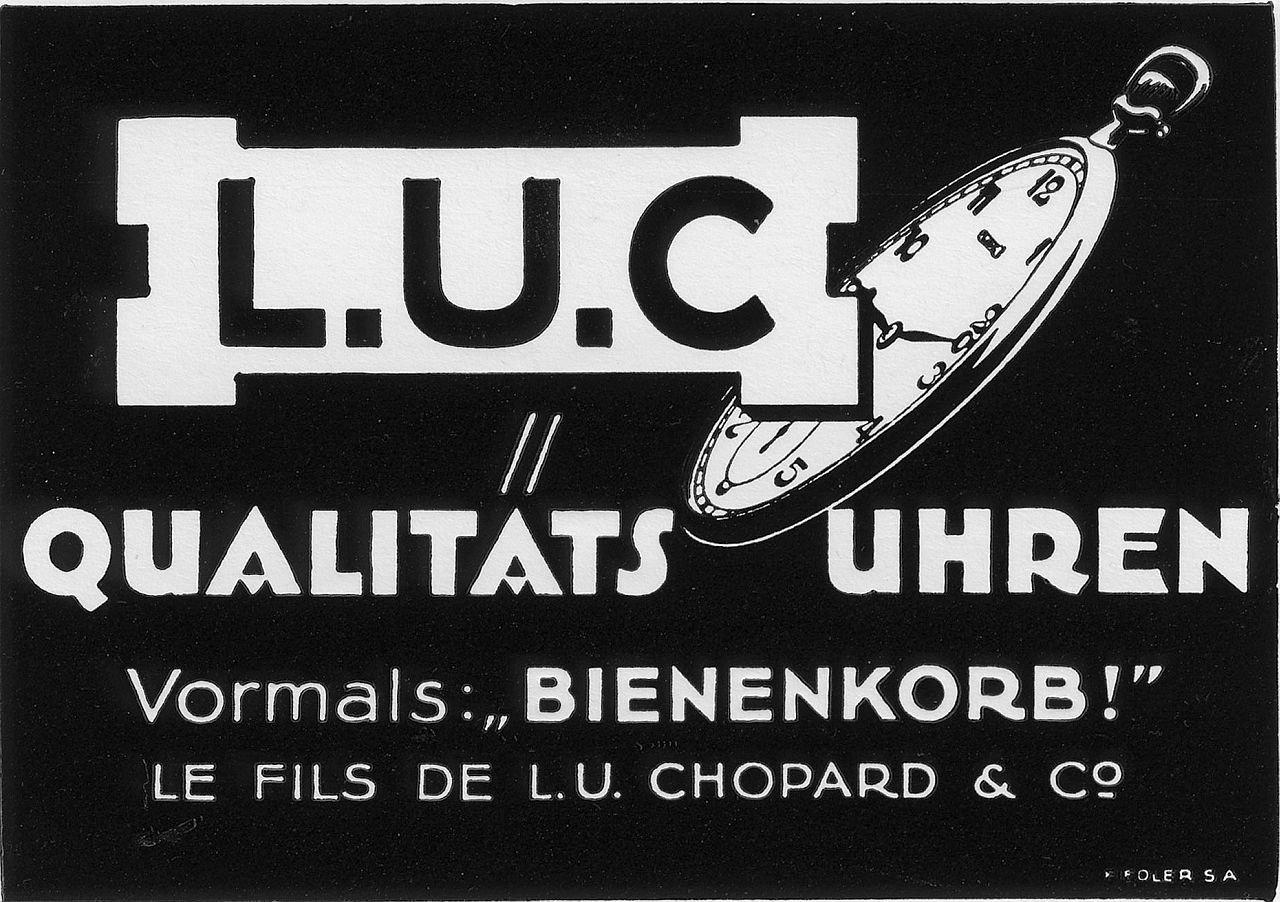 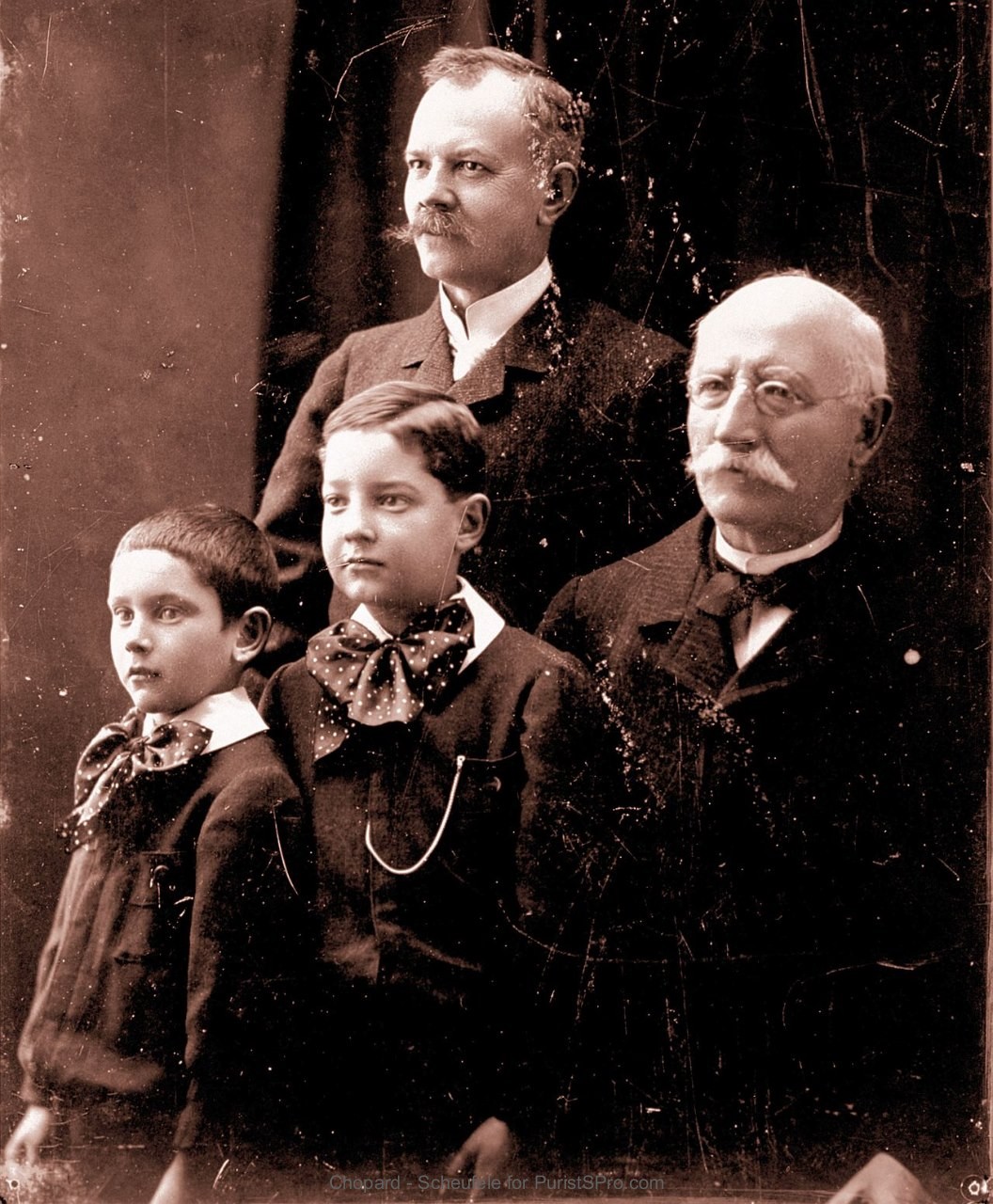 The jewellery industry flourished in Pforzheim, deep in the heart of the Black Forest in Germany.

The ‘golden town’ was Germany’s leading jewellery and watch producing centre since 1767 by an edict passed by the Markgraf (March Count) Karl Friedrich von Baden, whose grave is located in this city. 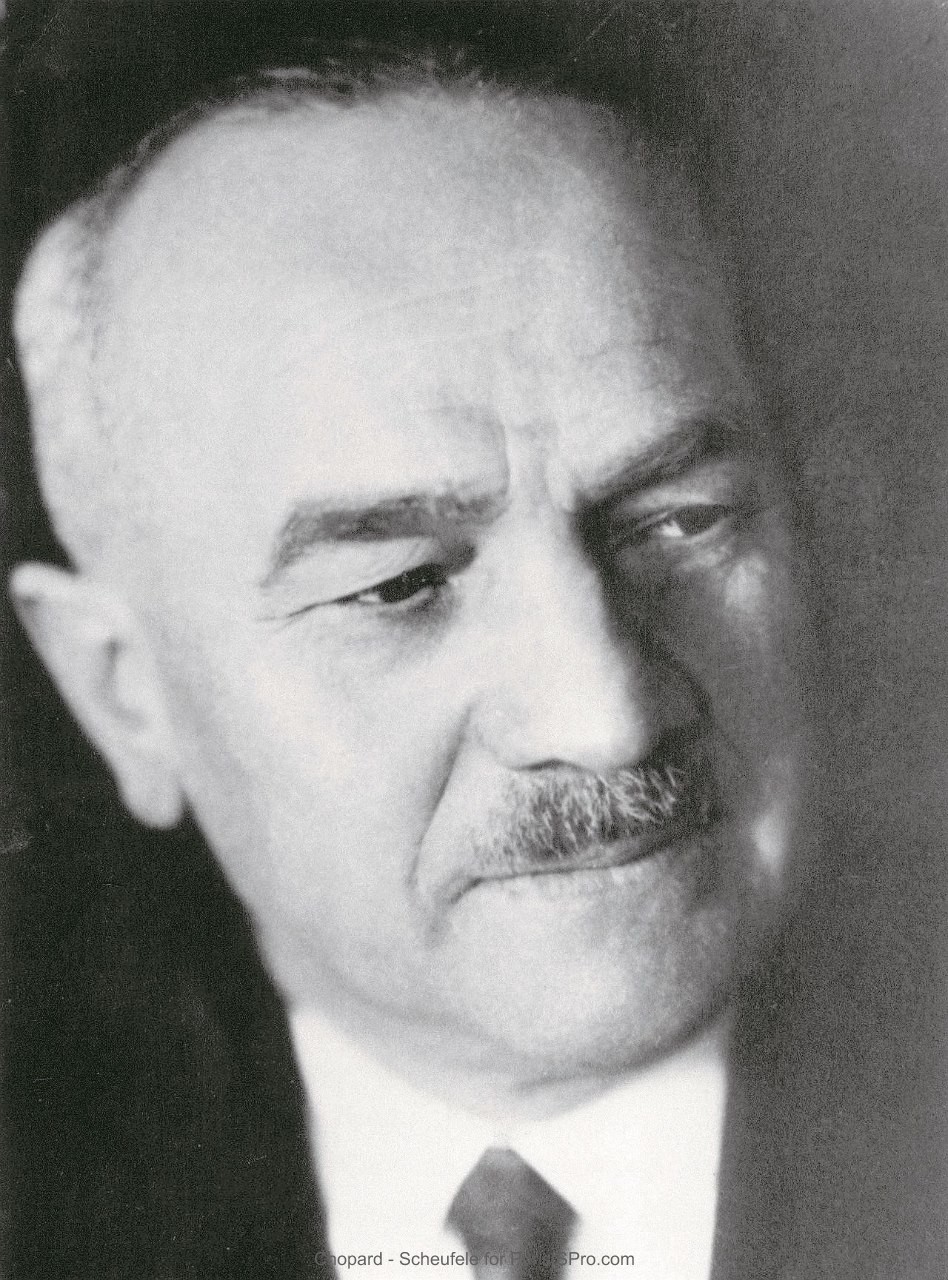 Karl Gotthilf Scheufele was born in Pforzheim on 6th August 1877 to Johannes and Sophie Scheufele. His life was altered tragically by the death of his parents when he was placed in an orphanage at the tender age of 11 years. That experience made him highly industrious and energetic but also allowed him to study watchmaking. After a spell as a salesman, he started on his own in 1904, making contacts in Russia and the Far East.

His manufacturing company (ESZEHA – spelling out the first three German phonetic letters S-C-H of his family name) made, in his own words, “brooches, pins, pendants and medallions” for domestic and foreign markets.  They were adorned with diamonds and pearls in floral motifs inspired by Art Nouveau. 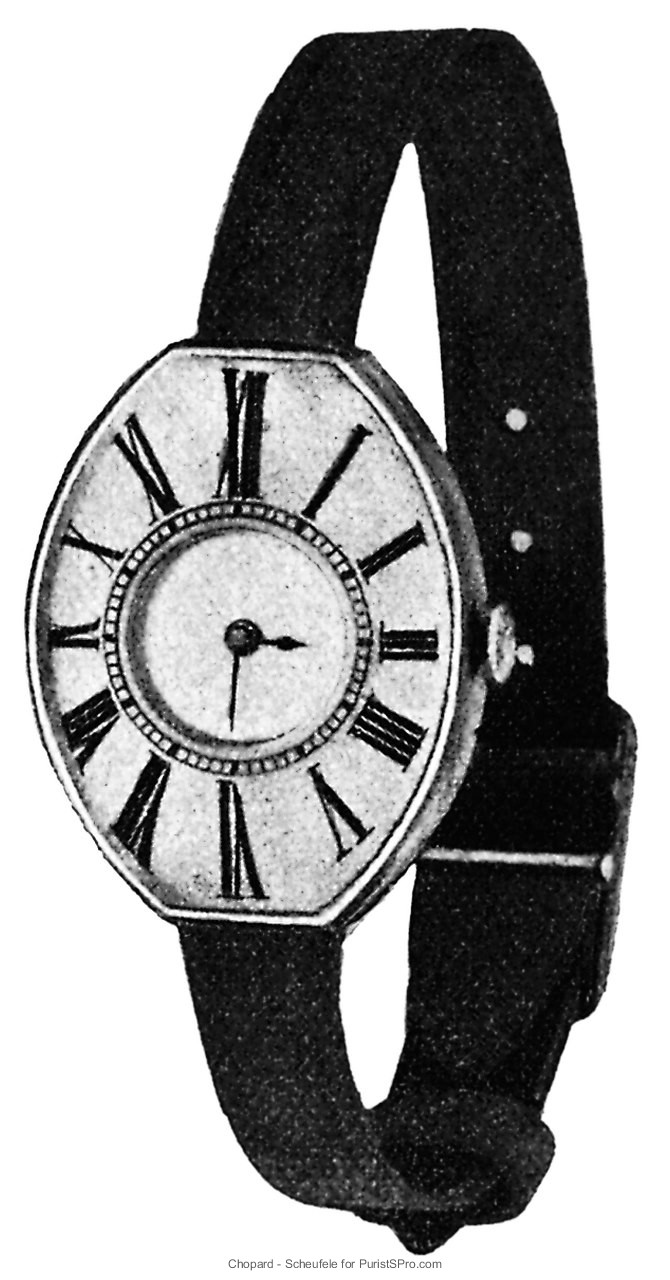 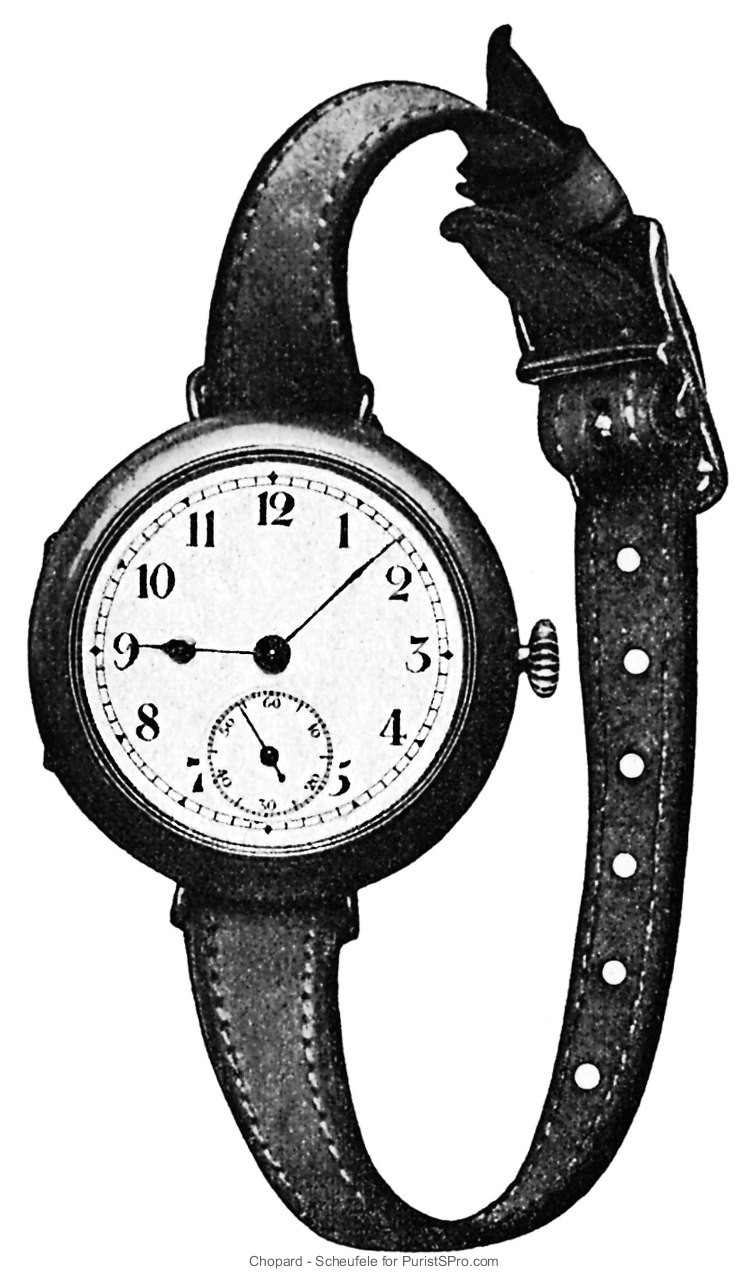 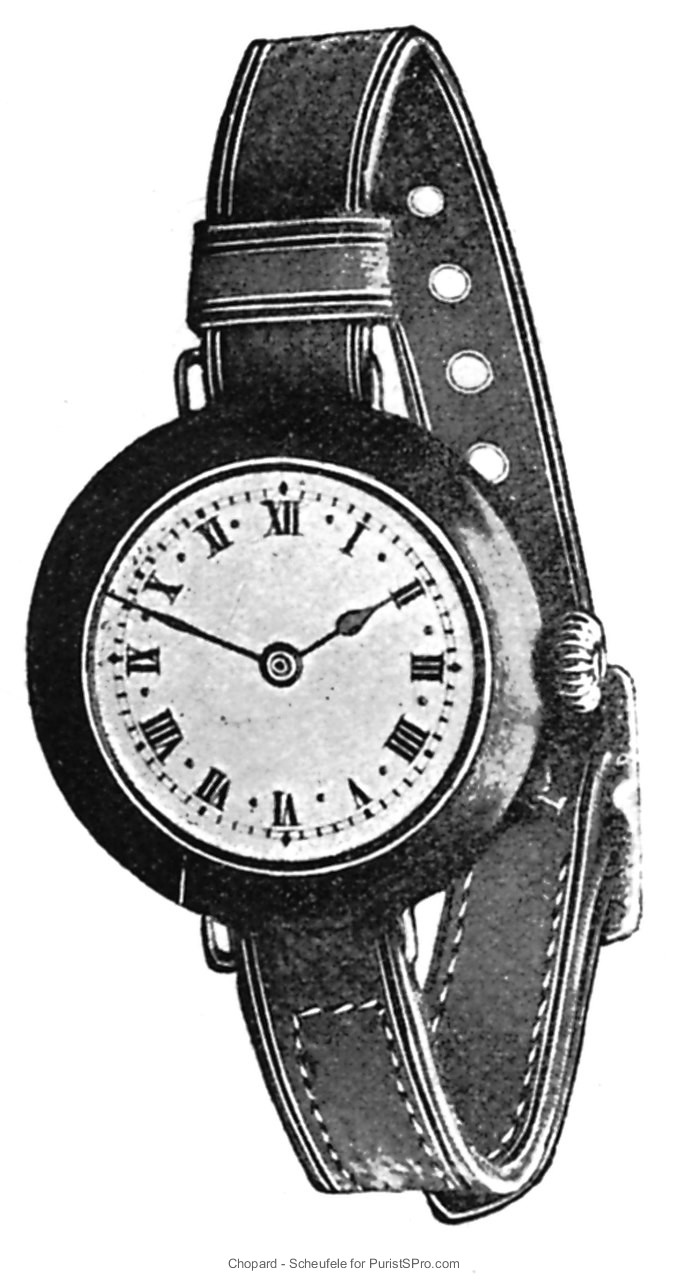 In 1911, Karl Scheufele I switched from delivering cases and bracelets to Swiss firms to the assembly of watches and marketing articles in platinum and gold.
After the 1st World War, the watch industry was most successful in Pforzheim, particularly when locally produced movement ebauche appeared.
Karl Scheufele I was supplied with movements by JLC, IWC, Vacheron Constantin and later, by Movado.

Most of ESZEHA watches were encased in platinum and gold richly set with gems.

In 1912, when wristwatches became fashionable, he achieved great commercial success with the ESZEHA watch clip that allowed the owner to attach a pocket-watch to the wrist OR to wear it as a necklace.

The innovative system at the centre of the bracelet served to house the watch securely between four ‘paws’. Women were quick to adopt this new way of wearing watches as jewellery. 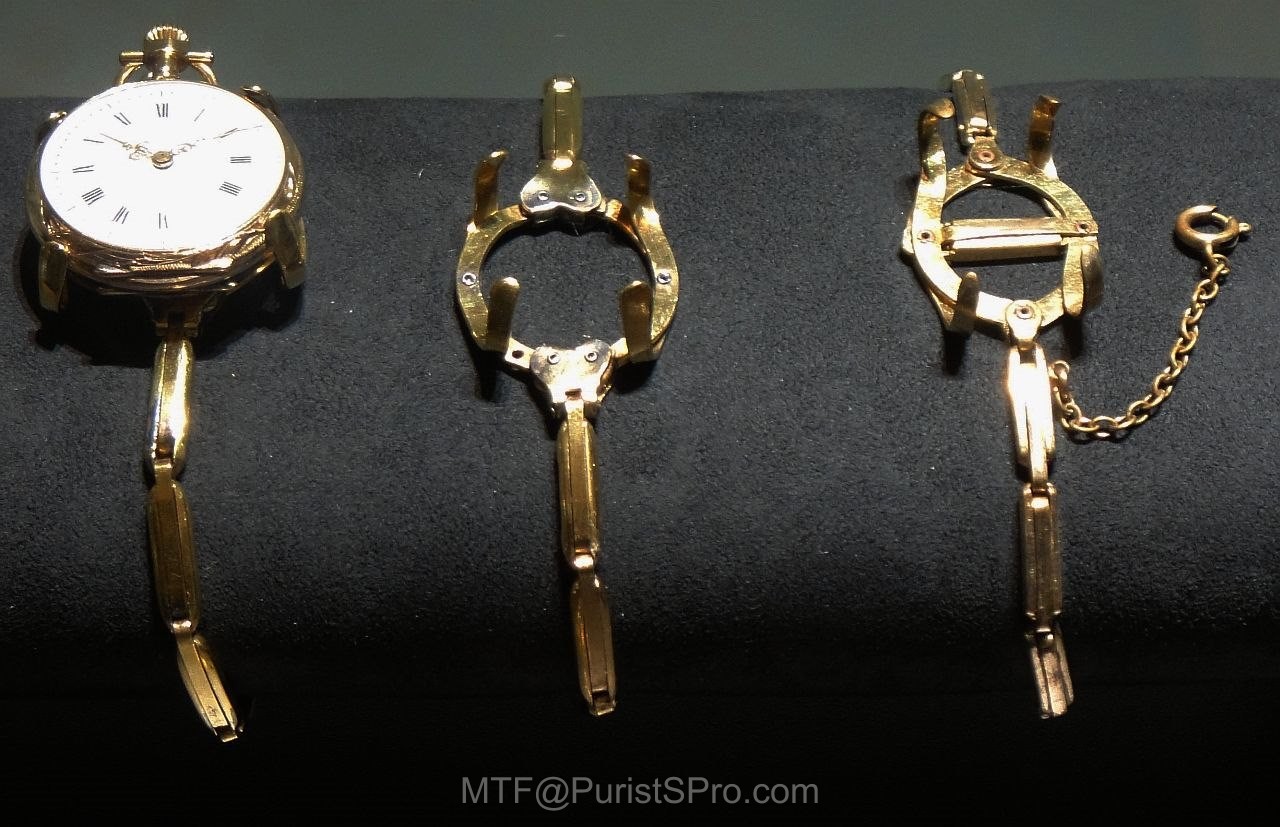 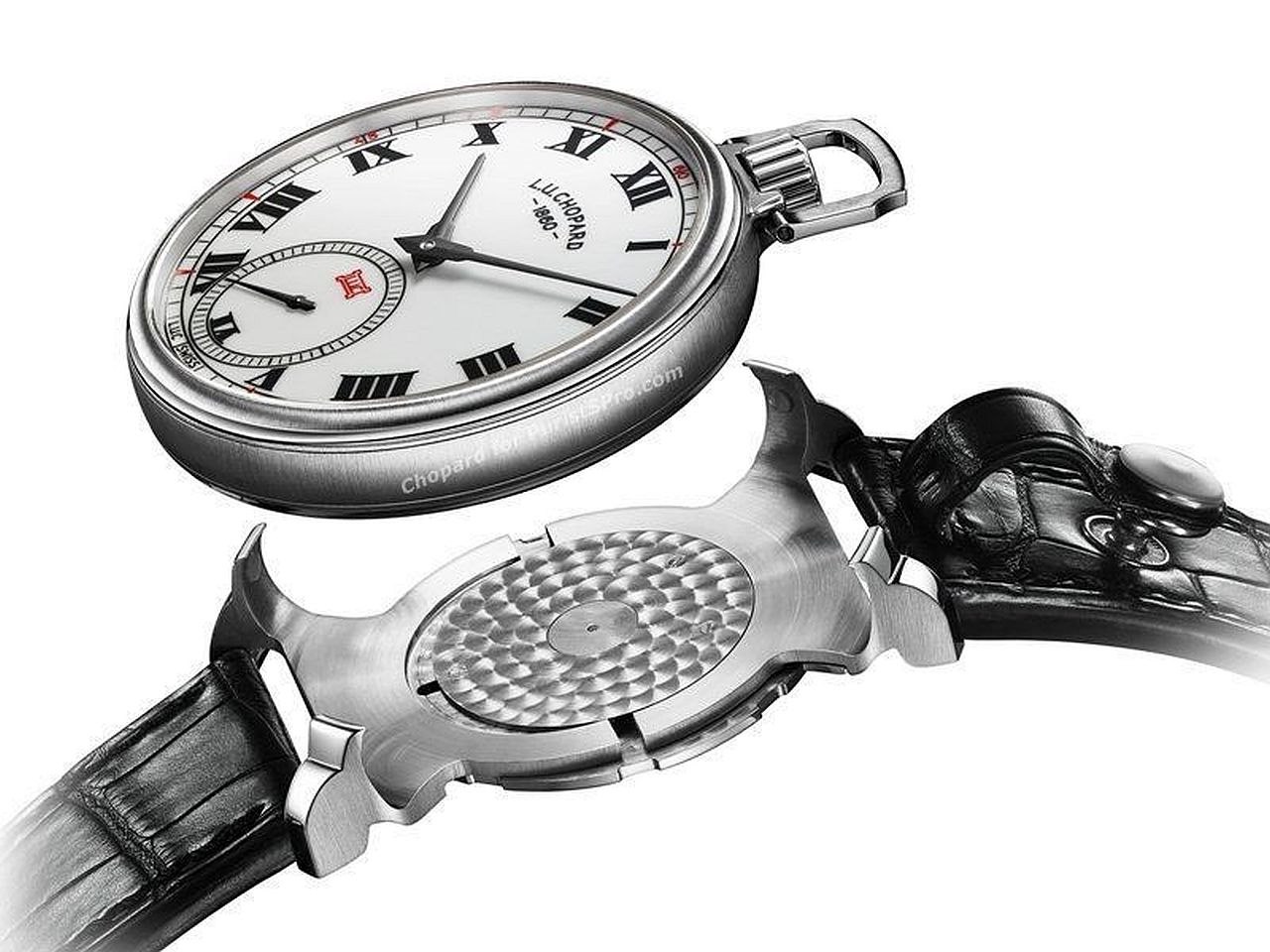 Karl Scheufele I was also blessed with a successful family life.

He married Paula Haecker in 1905 and little Hans was born, sadly a victim of infant death 3 weeks later.

1904: Founding of the “Karl Scheufele” brand specialising in jewellery watches distributed under the name ESZEHA.

Acknowledgements for Facts and Images:

By: MTF : December 11th, 2015-06:40
Chopard – Scheufele: Bound by Time Louis-Ulysse Chopard and Karl Scheufele I were born in different countries and 40 years apart but their life spans overlapped by 38 years and their descendents and businesses were destined to meet in the 20th century. Th...
login to reply

More in the series to come

By: heartbreaker : December 11th, 2015-23:29
As far as I remember, it's the first time I learn such information. Looking forward for the next iteration(s). Ciao, Elio
login to reply

There are some fascinating photographs in the series. (nt)