The art of miniature marquetry

Though Cartier has been producing Metier d’Art watches for several years, mostly decorated in enamel, 2011 sees the introduction of the largest collection yet. Of six models unveiled this year, all were enamelled (along with other decoration like engraving), save for one, the Rotonde de Cartier jumping hours with bear motif in marquetry. 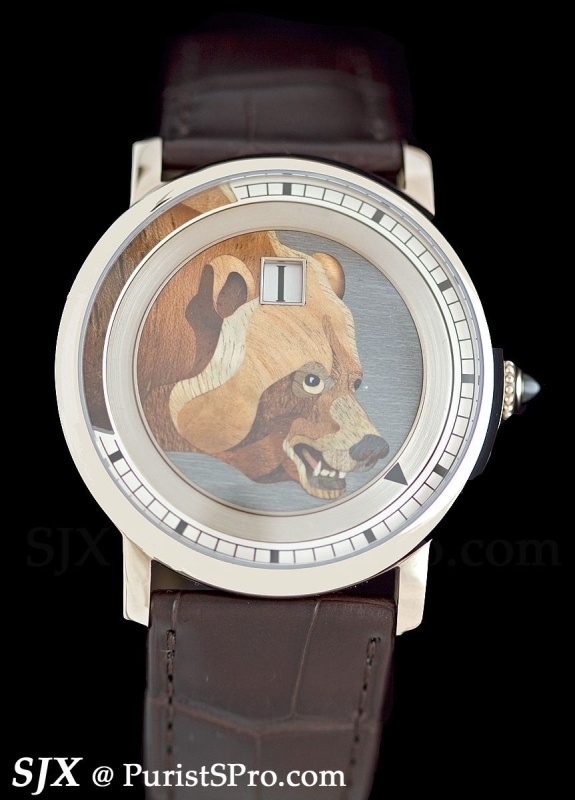 The watch itself is the jumping hours from the Fine Watchmaking collection with a white gold case. Instead of the two-layered, grey guilloche dial of the regular model, the limited edition Metier d’Art version features an exceptional dial. It depicts the head of a brown bear, astonishingly formed out of 38 pieces of wood veneer. 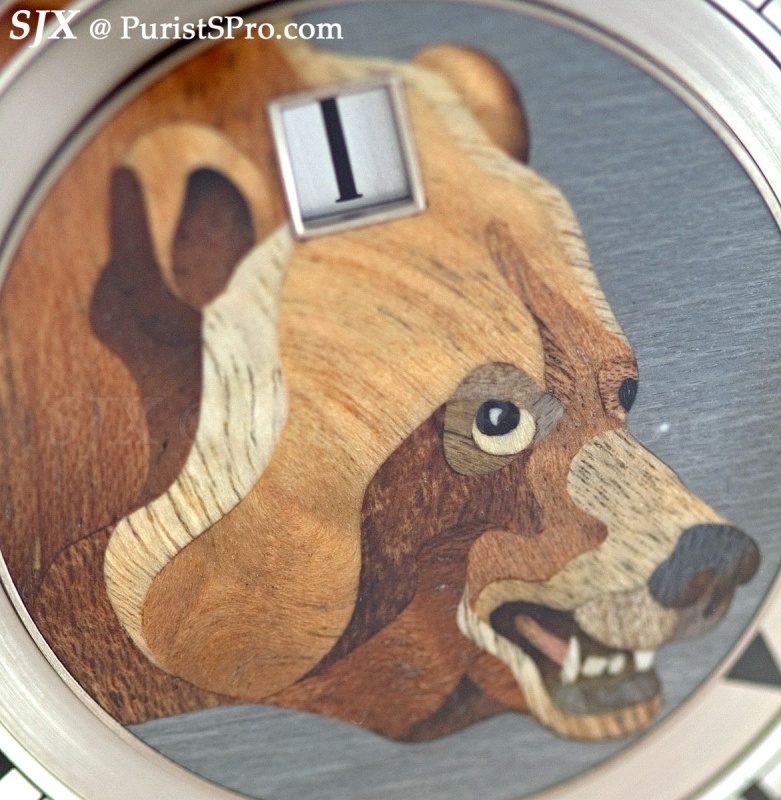 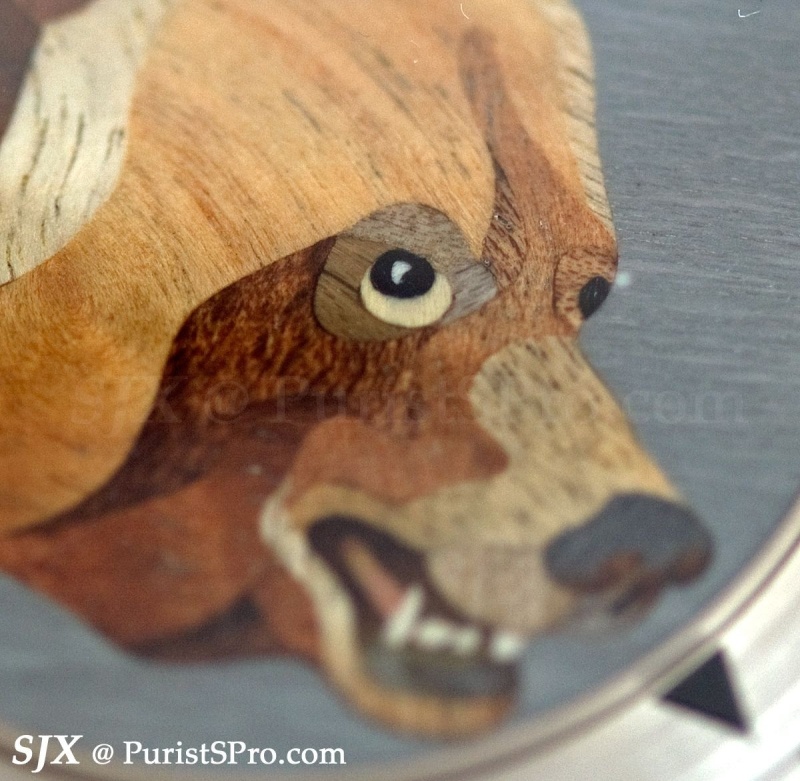 This technique is known as marquetry and is most often found on furniture and items like humidors and clocks, larger items for the most part. In contrast this watch is a mere 42 mm wide in diameter, with a dial about 30 mm wide. The artisan who creates the dial is Jérôme Boutteçon, an award-winning French marqueter who in addition to Cartier has worked for other watchmakers.

To create the dial, Mr Boutteçon has to select the right veneers – slices of wood millimetres high – from his cellar. They need to be the correct colour, contrast and grain. The colour is important for obvious reasons, while the grain matters because it creates the perceived texture of the fur of the bear. 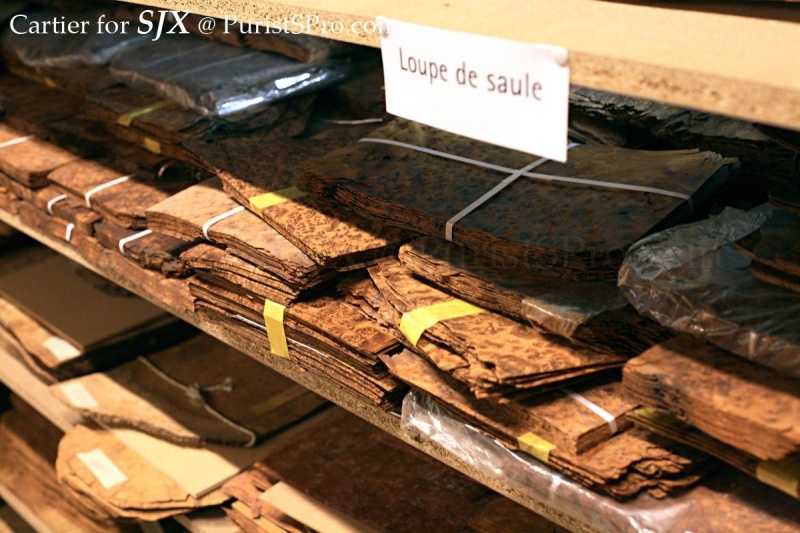 As Mr Boutteçon says, the veneers are his “palette of colours”. But unlike paint, each piece of wood is unique, so a veneer sometimes waits for the perfect project. According to Mr Boutteçon the walnut veneer used for the bear was sitting around for more than ten years, but with the bear dial, “its time [had] come”. In total ten types of wood are used for the dial: holly, chestnut, poplar, willow, grey and pink maple, walnut and burr walnut, mottled maple and grey aningeria. 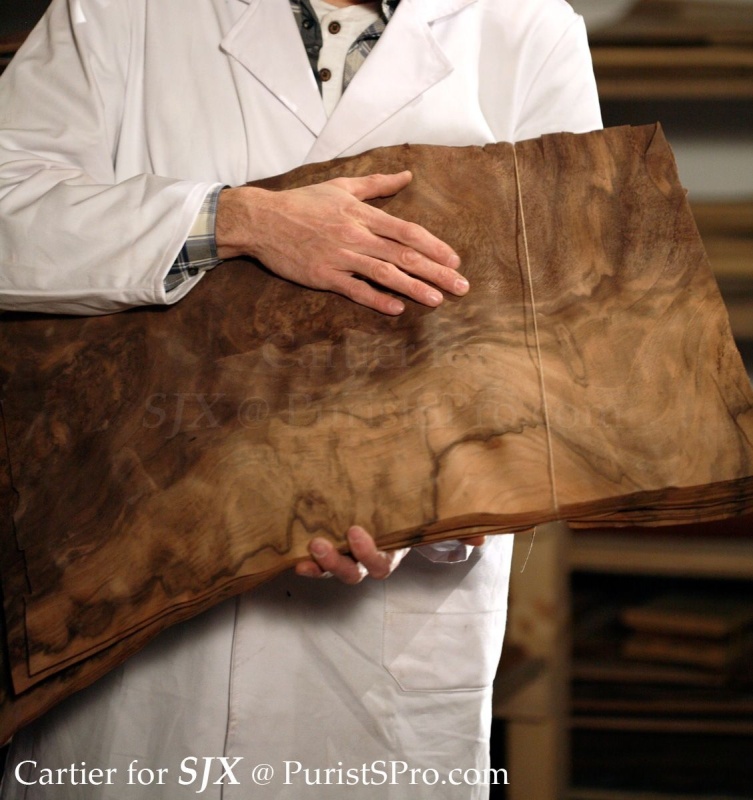 Using the design supplied by Cartier, Mr Boutteçon makes a line drawing, essentially a template with which to cut the pieces of veneer, which are stacked up in ten layers high and cut together, into the right shape. 12 hours of sawing is required to cut out the 38 pieces of wood for the dial, because it is done by hand. 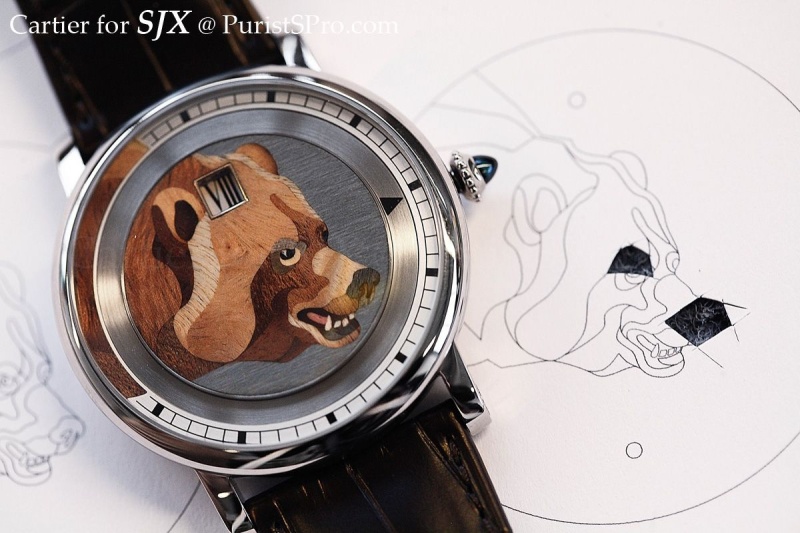 This is done with a foot-operated saw, with the stacked veneers being carefully moved by hand according to the template. The saw is so fine that it can saw through a pin head, according to Mr Boutteçon. This precision allows for Mr Boutteçon to cut along the middle of the 0.13 mm line of the line drawing, which allows the pieces to be fit together exactly. 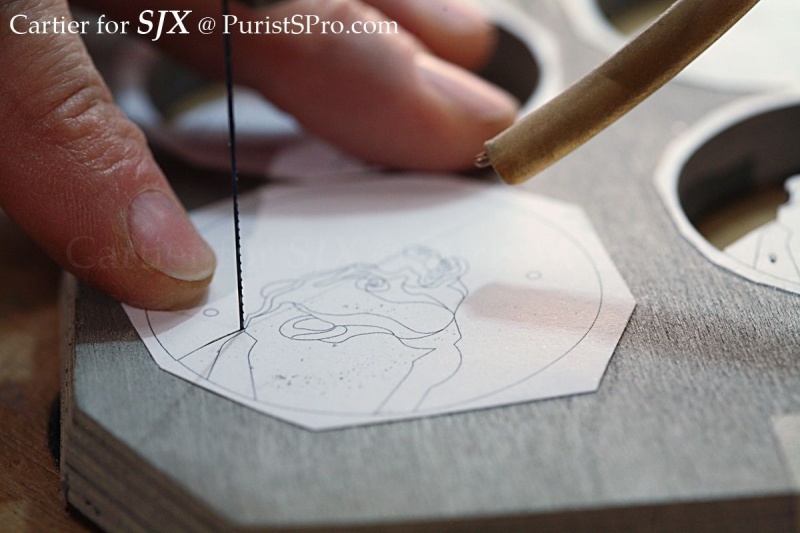 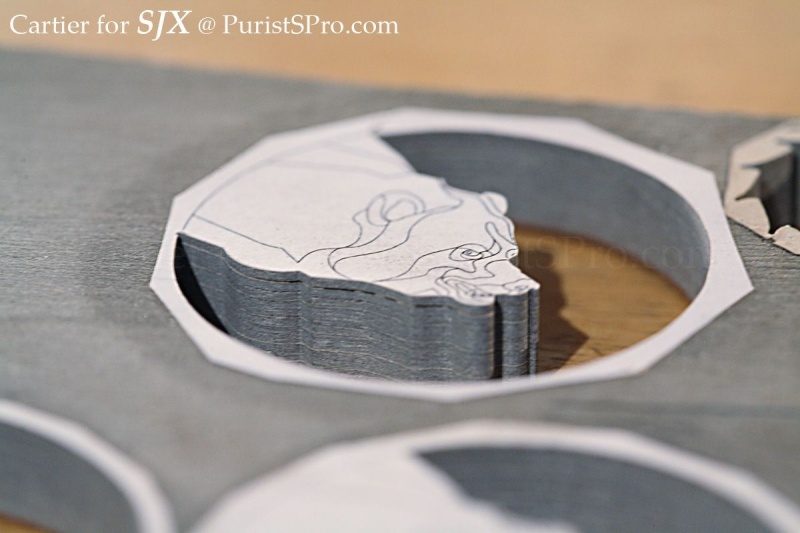 After the cutting is completed, the slivers of wood are pieced together. Some pieces need to be partially shaded for depth and shadow. This is done by heating the piece ever so slightly. 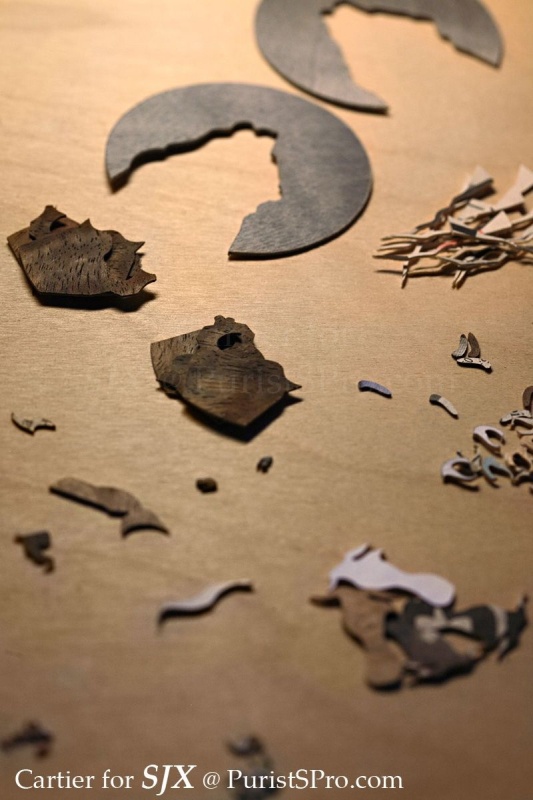 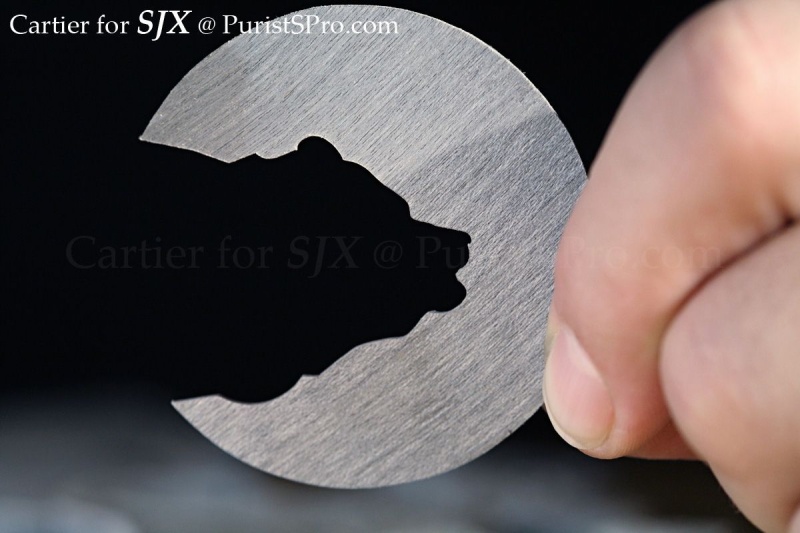 After they are assembled the entire dial needs to be polished and sanded. Because the dial is paper thin, this has to be done cautiously so as not to wear down the veneer excessively. By the end each dial takes about 160 hours of work. 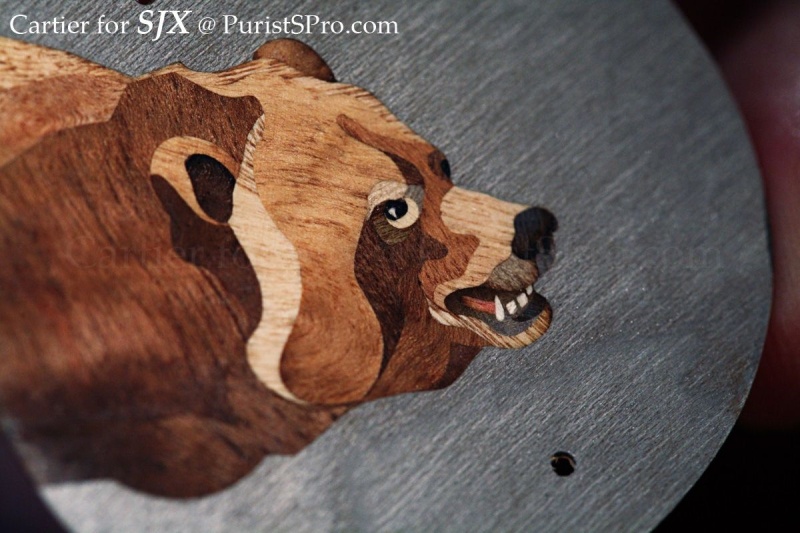 Marquetry produces more muted colours, but it is no less nuanced than enamel. Though not as widely used in watchmaking as enamel, and consequently not as well known, marquetry is as much of an art as enamelling.

Mr Boutteçon talks about his work in this video

The art of miniature marquetry

By: SJX : September 4th, 2011-03:42
Though Cartier has been producing Metier d’Art watches for several years, mostly decorated in enamel, 2011 sees the introduction of the largest collection yet. Of six models unveiled this year, all were enamelled (along with other decoration like engravin...
login to reply

Have never imagined marquetry be used in horology...

By: KIH : September 4th, 2011-16:41
... Marquetry is a tradtional form of art in many cultures for ages, and we still even see a lot in the souvenir shop of the touristic places as well. I am impressed to find that the marquestry is used by high-horology brands like Cartier and would love t...
login to reply

By: SJX : September 4th, 2011-19:27
There are pieces of marquetry objects in various museums (the castle museum in Dresden for example) that have been there for several centuries. Used with care I'm sure the watch will last a long, long time. Probably in a temperate climate and not a humid ...
login to reply

By: KIH : September 4th, 2011-20:16
... the cultures of woods do not leave lots of buildings or structures for a very long time as the ones of stones, therefore I got curious.... but you are right, I guess temerature and humidity would be the key, maybe.... But it is not something we should...
login to reply

By: VMM : September 5th, 2011-05:03
Love this kind of watches. This one particulary, it's a very nice timepiece with the added value of the marquetry art. Cartier definitely know how to do these special creations, the one with the mosaique turtle is my fav by far; what a beautiful piece of ...
login to reply

If on a lesser brand, it would be accused of being gimmicky. But on a Cartier.....

By: Hororgasm : September 6th, 2011-14:10
Is really a piece of Art. The video is a great illustration. Thanks for the enlightening report. Best, Horo
login to reply

And that is the power of branding...

By: SJX : September 6th, 2011-20:35
But seriously on a lesser brand it would not be viable to produce such a watch because the cost will be inevitably high due to the cost of the dial. And consumers would be unlikely to pay the necessary price for such a watch from a lesser brand, notwithst...
login to reply

By: socialize : September 8th, 2011-09:11
I love marquetry, in fact I create artworks with wood too, but Cartier, in my opinion, did not design the bear to look natural as it is a rendition from natural wood. The shape of the pieces of wood do not blend together well enough to create smooth trans...
login to reply

By: SJX : September 8th, 2011-10:05
I looked at your site and some of the work looks almost like a painting. They must be quite extraordinary in real life. I see your point. Would the size of the dial be a factor in the result? Or is it a matter of design and conception? - SJX
login to reply

By: socialize : September 8th, 2011-10:21
The size of the dial is not small enough to be a factor in this case. It is the design of the shapes of the cutouts. I prefer cutting just the right number of shapes and let the natural textures and shadings of the wood veneers do the rest.
login to reply

By: SJX : September 9th, 2011-23:44
This is an interesting topic and I shall endeavour to learn more. Do you happen to have any photos of examples to show what you mean? - SJX
login to reply

By: socialize : September 10th, 2011-08:09
I am tweeting on Twitter to share with people exeptional marquetry from some of my favorite artists here with pictures of their works: http://twitter.com/AmazonCanvas I plan to design a bear in marquetry on a smaller watch than what is shown from Cartier ...
login to reply

Would you be able to create a watch dial from a photo of an individual?

By: socialize : September 26th, 2011-09:24
Yes, or just a description of the subject to be made is adequate. Vincent
login to reply

By: playtime : September 13th, 2011-10:22
thanks for sharing this one--remarkable how much labor is involved for one dial alone.... J
login to reply

Interesting read. Thanks for posting. [nt]

Loved the video. Thanks for posting it! [nt]