Two Breguet wristwatches from the era of Chaumet, Bodet and Roth 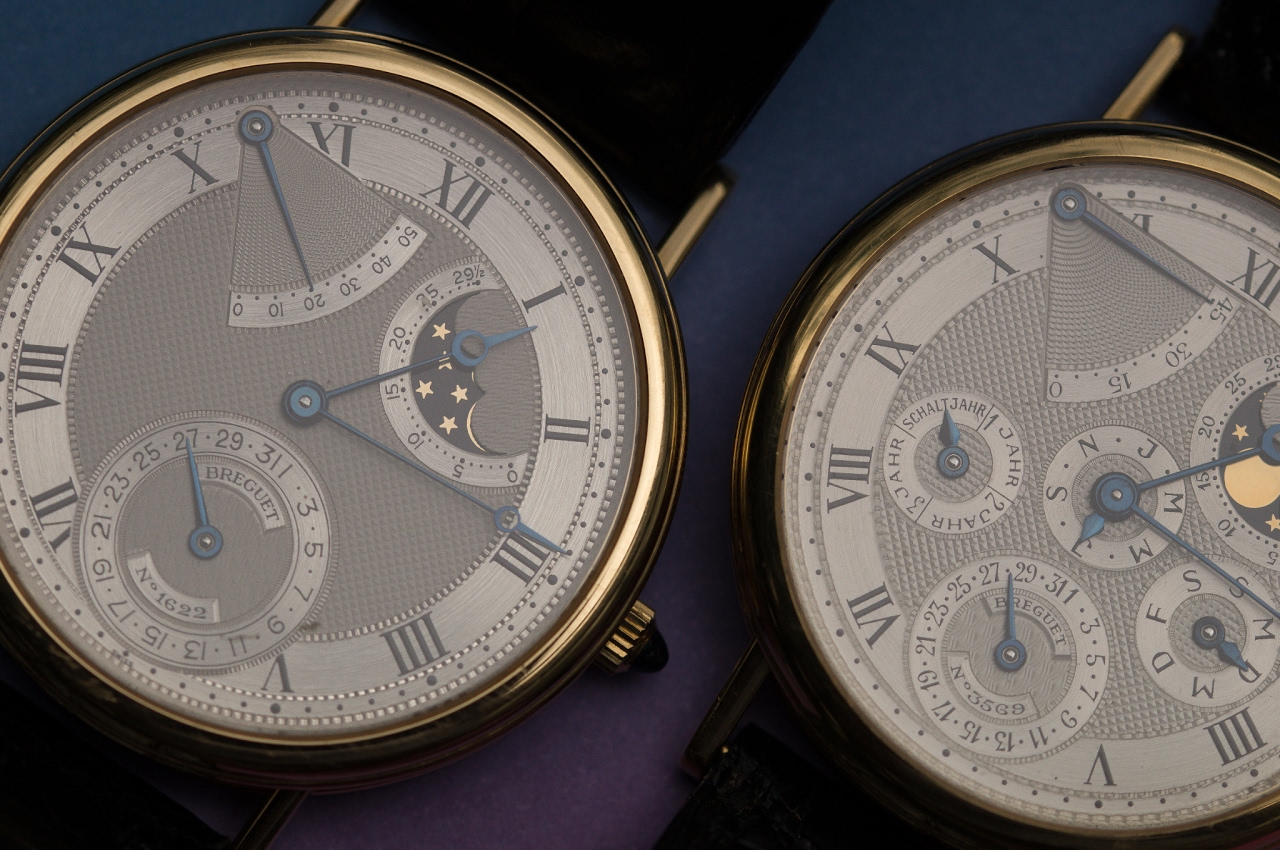 On the 23rd September last year I attended an evening preview at Sotheby’s in London, firstly to congratulate an old friend on his new book being presented at the same event, and to handle two 1980s Breguet wrist watches that a friend had shown interest in. Needless to say, it is rather easy to get carried away at an auction house soiree, which lead to me almost forget to peruse the lots within the vitrines. As the watches were being safely removed for the night I quickly glanced at the two lots as requested and promptly messaged him to advise that they were both in fine fettle.

Fast forward to late July of this year and instead of my planned visit to the Breguet boutique in London to photograph various pieces from the current collection that had been planned for the spring, I made arrangements to access the two watches referred to above that my friend had purchased. The first photo shows the watches side by side and clearly demarcates the period of watchmaking at Breguet spearheaded by a young Daniel Roth and the ownership of the Chaumet brothers. 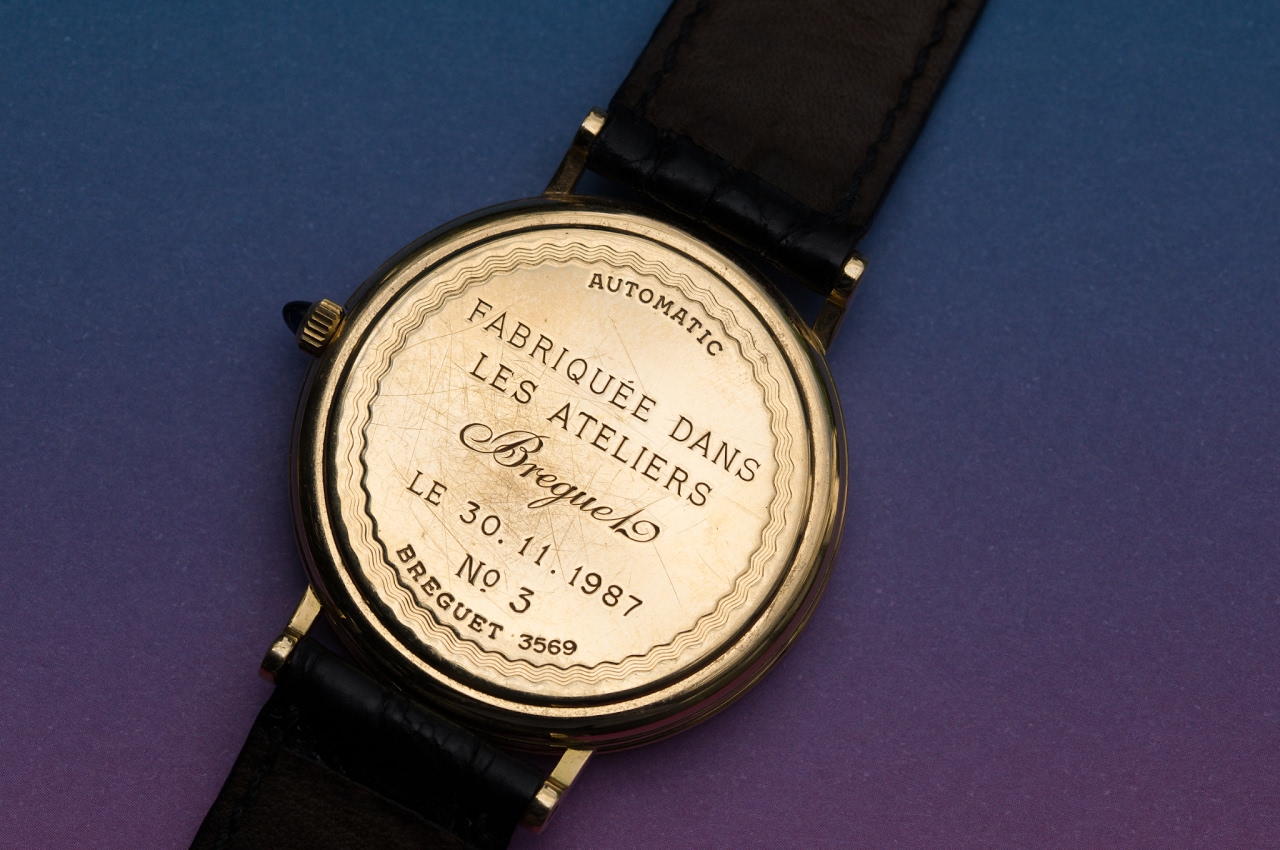 After having spent a couple of hours chatting and photographing, I began to investigate these two timepieces, paying particular attention the watch above. The case back belongs to the perpetual calendar, reference 3310, introduced in 1986. In fact, and this has been confirmed by Maison Breguet in an email to the owner, this is the 3rd ref.3310 to leave the factory on the 30th November of that year (something that was not mentioned in the catalogue essay when he purchased it at auction, the essay merely stating that No.3 is engraved on the caseback). 1987 was a notable year in the history of Breguet as Jacques and Pierre Chaumet, who had purchased Breguet in 1970 from George Brown, were arrested and subsequently charged with fraud on the 13th June of the same year (the photo below shows an extract from the New York Times dated June 15th 1987 headlined ‘A Scandal in French Jewellery’). This swift change in the status of the brothers led to the sale of Breguet to Investcorp that same year. 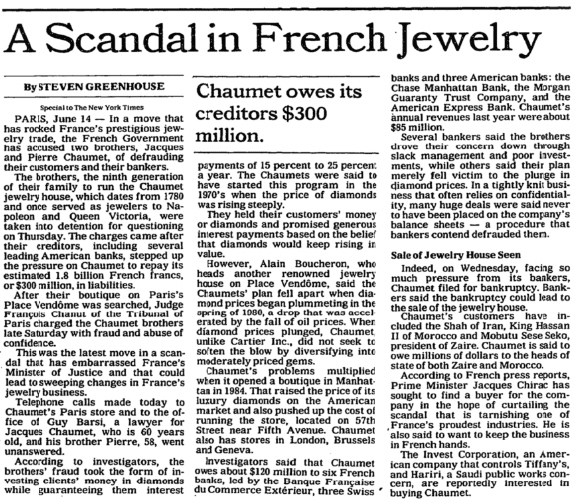 The development of the perpetual calendar wristwatch at Breguet was lead by Daniel Roth who first created the reference 3050 seen below in the 1970s after he joined the company in 1973. (I should add that the date of the first 3050 is not clear to me personally as the Maison advised that the first iteration was only available in 1985 and I have read elsewhere that it was introduced in the mid-1970s). Remember also that perpetual calendar wristwatches in series were extremely rare at the time (Patek lead the way in the middle of the twentieth century and ref. 3450 was replaced by ref. 3940 in 1985).

The origins of this particular model can be found in the school watch Daniel Roth made whilst studying in Le Sentier for 2 years on the advisement of Francois Bodet, the director of Breguet between 1973 and 1987, the man who had persuaded the Chaumet brothers to hire him from Audemars Piguet. 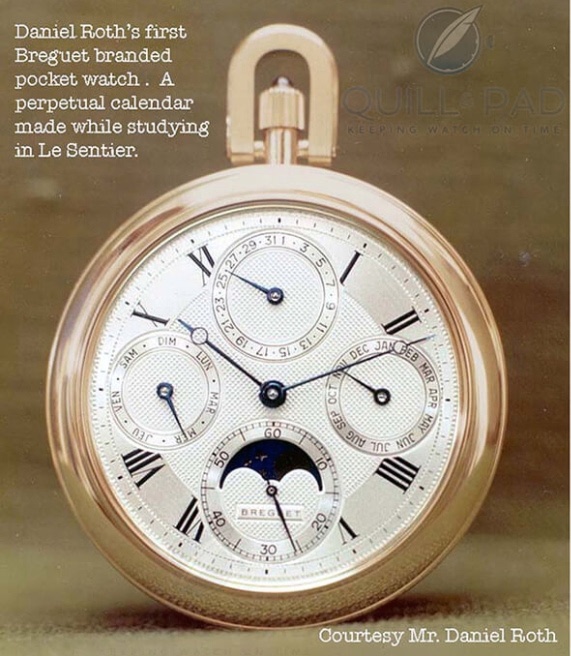 The functional distinction between this earlier watch and the 3310 is that the latter was endowed with an additional indication for the power reserve. Of course, the layout is completely renewed and is less ‘traditional’ in its appearance. The 3310 was arguably Roth’s swansong before he left the company in 1987 when the Chaumet’s tenure came to an abrupt end. It is also fascinating to imagine what the atmosphere was like in the atelier when this watch was completed: the company’s future unclear with regards ownership, but cemented in terms of the direction its watchmaking was taking.

What is also interesting to note is that according to an email correspondence I had with Breguet, they confirmed that the reference 3310 was manufactured between 1986 and 2000 and although on the surface it seems unlikely that they only made 3 watches in the space of a year or so, these particular perpetual calendars were particularly delicate watches that included slim movements with a new complicated module and engine turned dials. Plus Bodet is quoted as saying that they only produced 2 or 3 perpetual calendars a year due to the 30 different professions required to manufacture a single piece (see 'Breguet: The Story of a Passion, 1973-1987).

I thought it would be apposite to include the text of the email from Breguet as received by the owner.

Some further images of the watch. 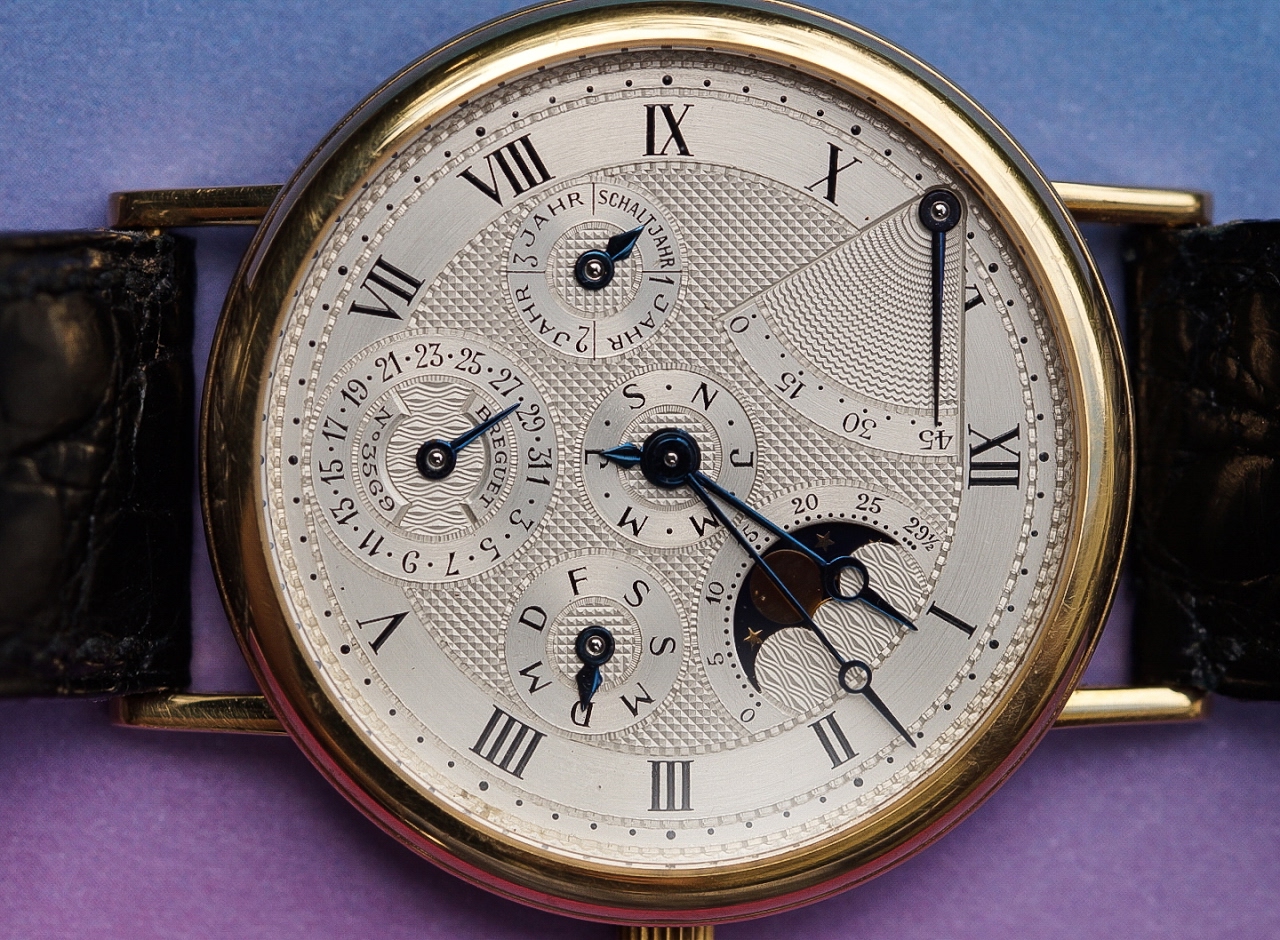 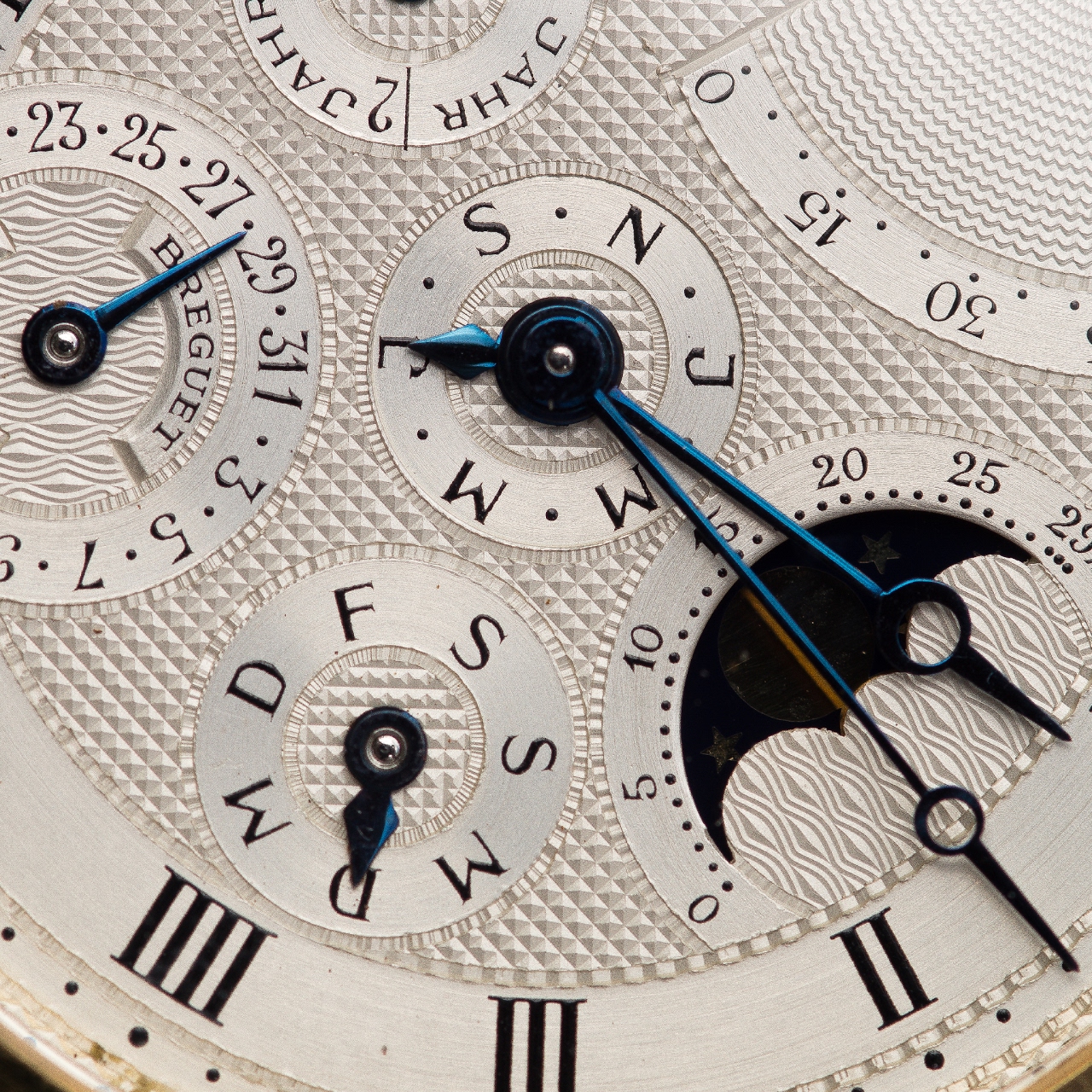 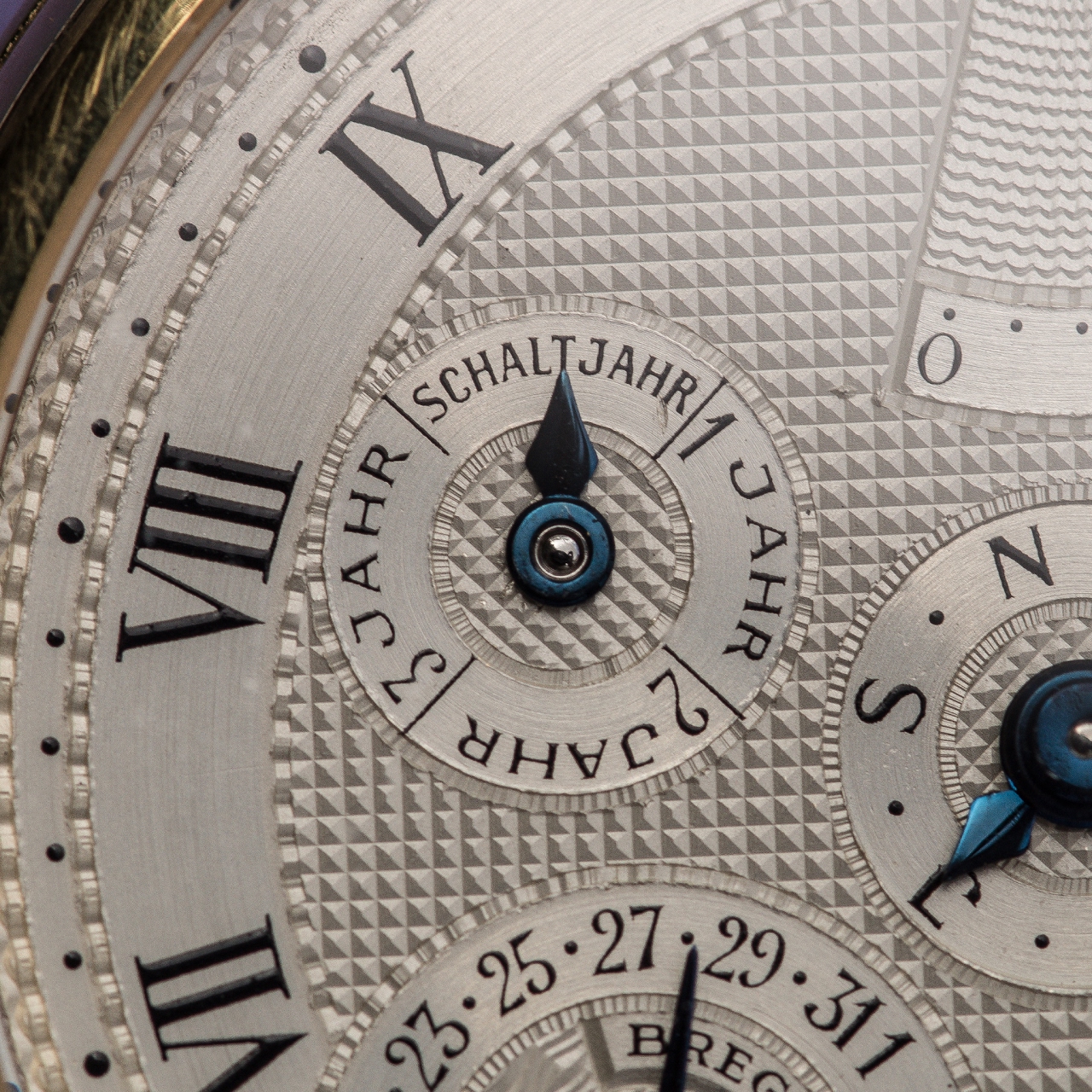 As a postscript to the story of this watch, I also located the first ever ref. 3310 off the production line in an Antiquorum catalogue. Note that it has case no. 3570 where our watch has case no. 3569. 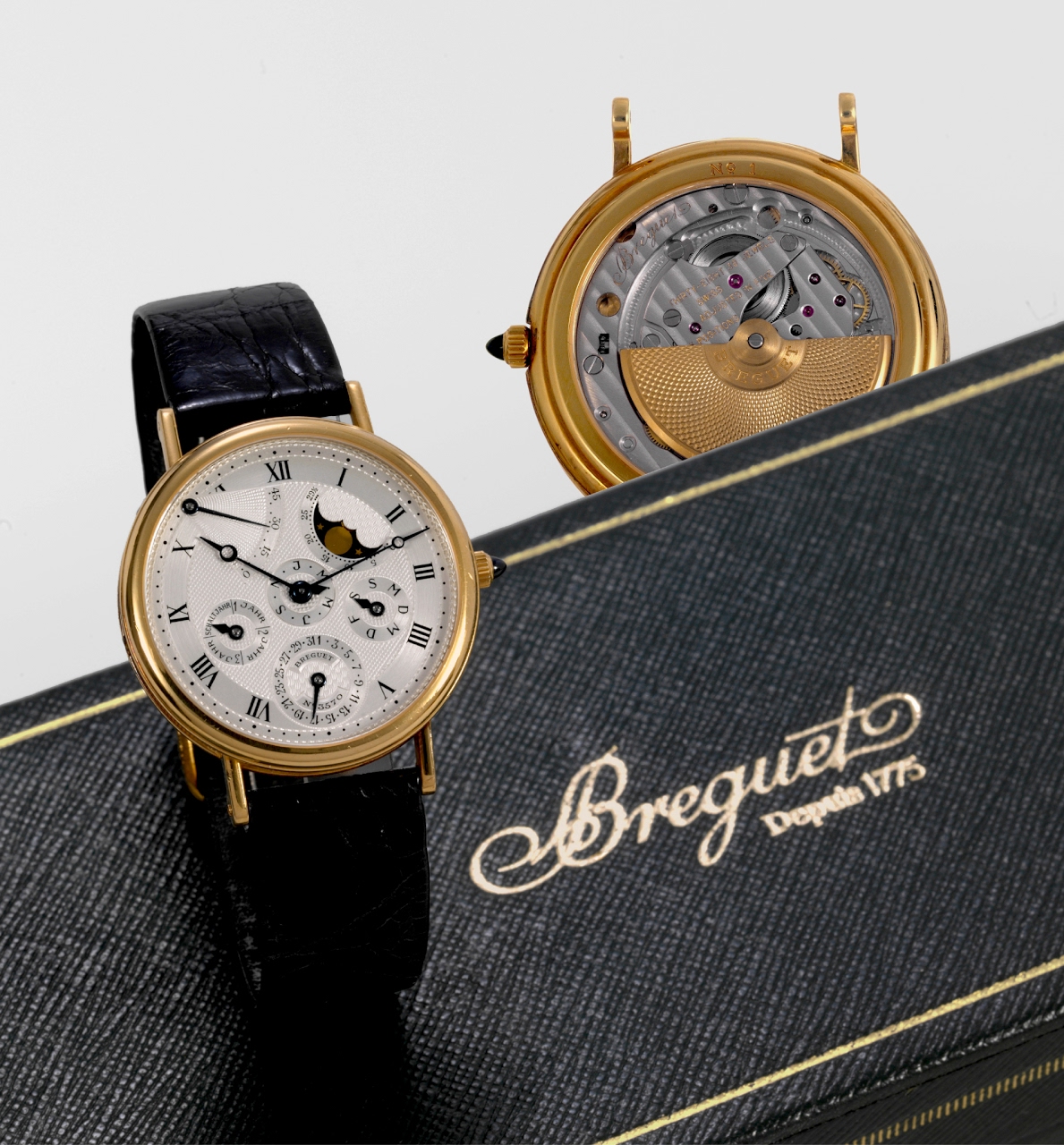 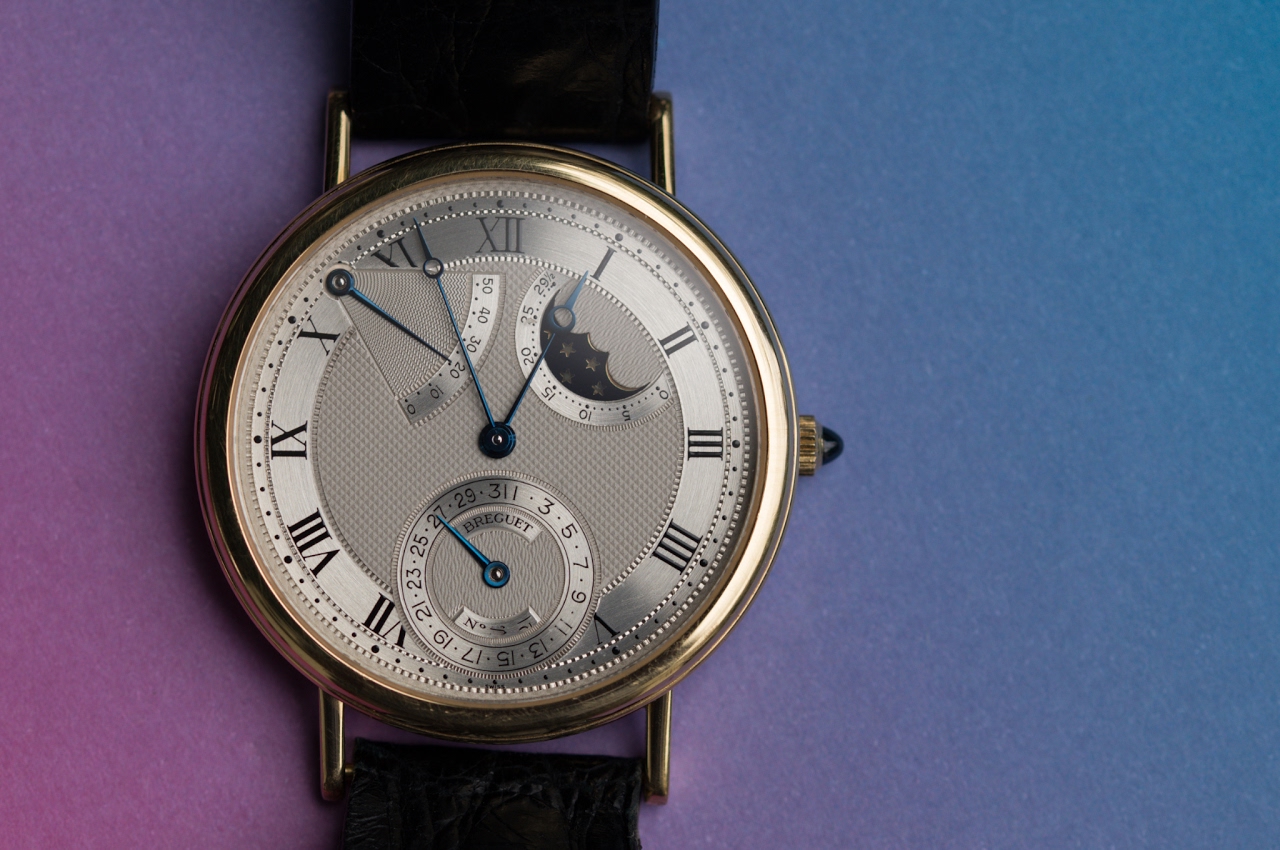 Introduced in 1983, the watch features a sectoral power reserve, phases of the moon and a sub dial at 6 displaying the date. I have read that the display caseback and ornately engraved movement are features of the later, updated, reference 3137, but this particular early 3130, dated to 1986, seems to be an unusual example (many others I have seen in auction databases have solid casebacks).
The reference 3130 was inspired by Breguet pocket watch No.5 sold in 1794 as seen below. 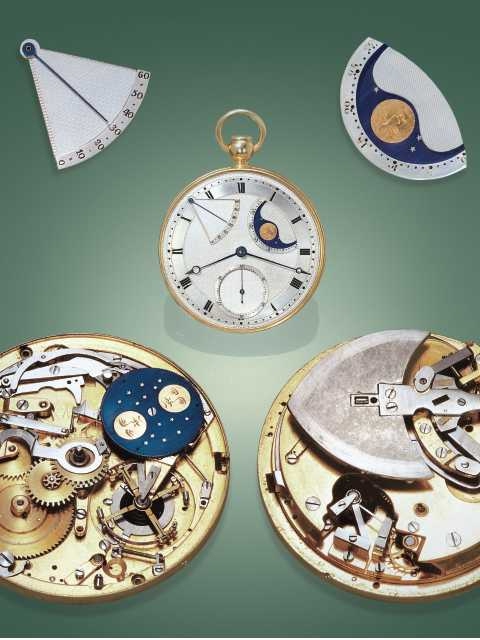 Breguet No.5 from 1794. Image courtesy of Antiquorum


Please enjoy some further images of the watch's dial and movement. 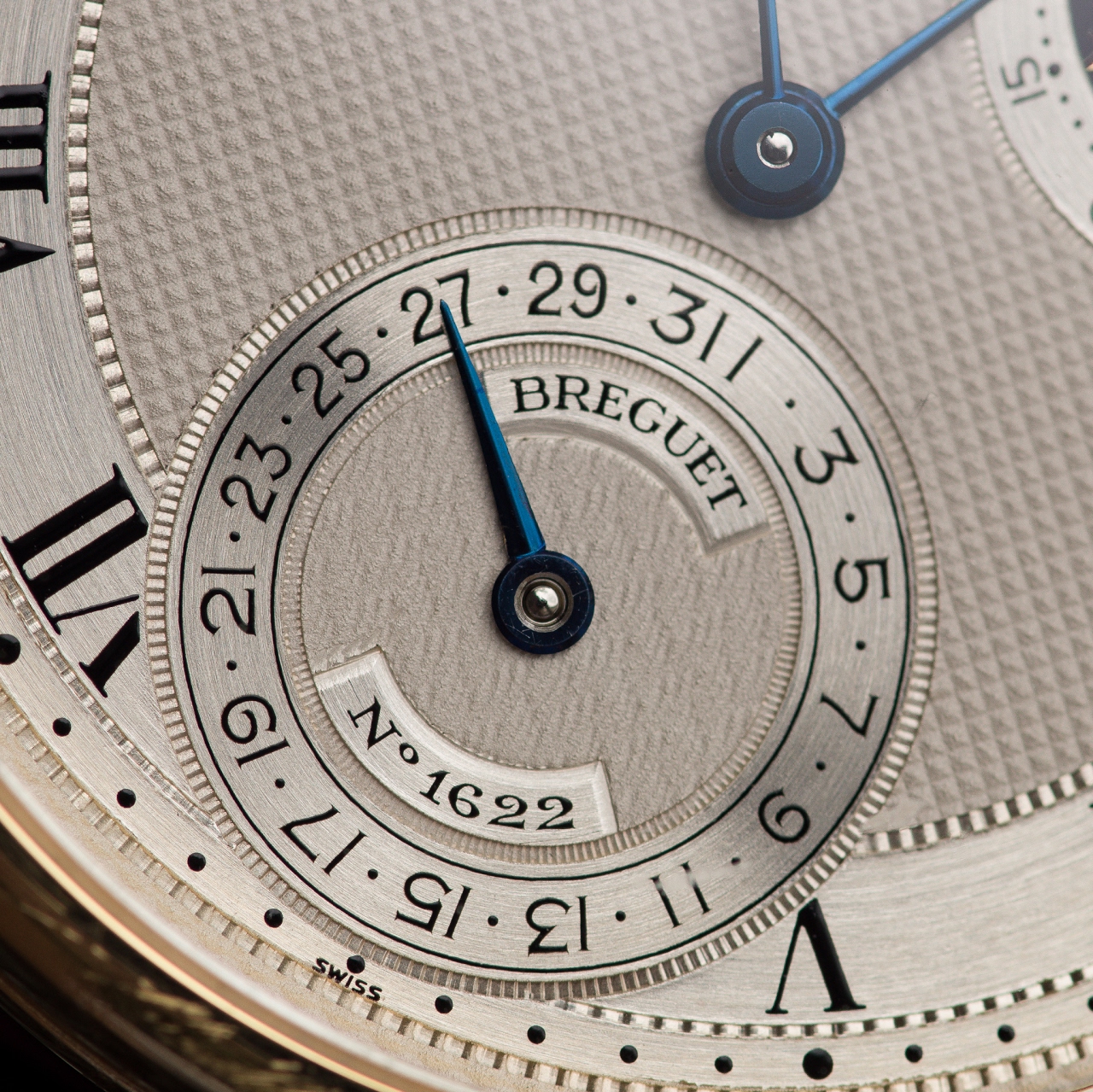 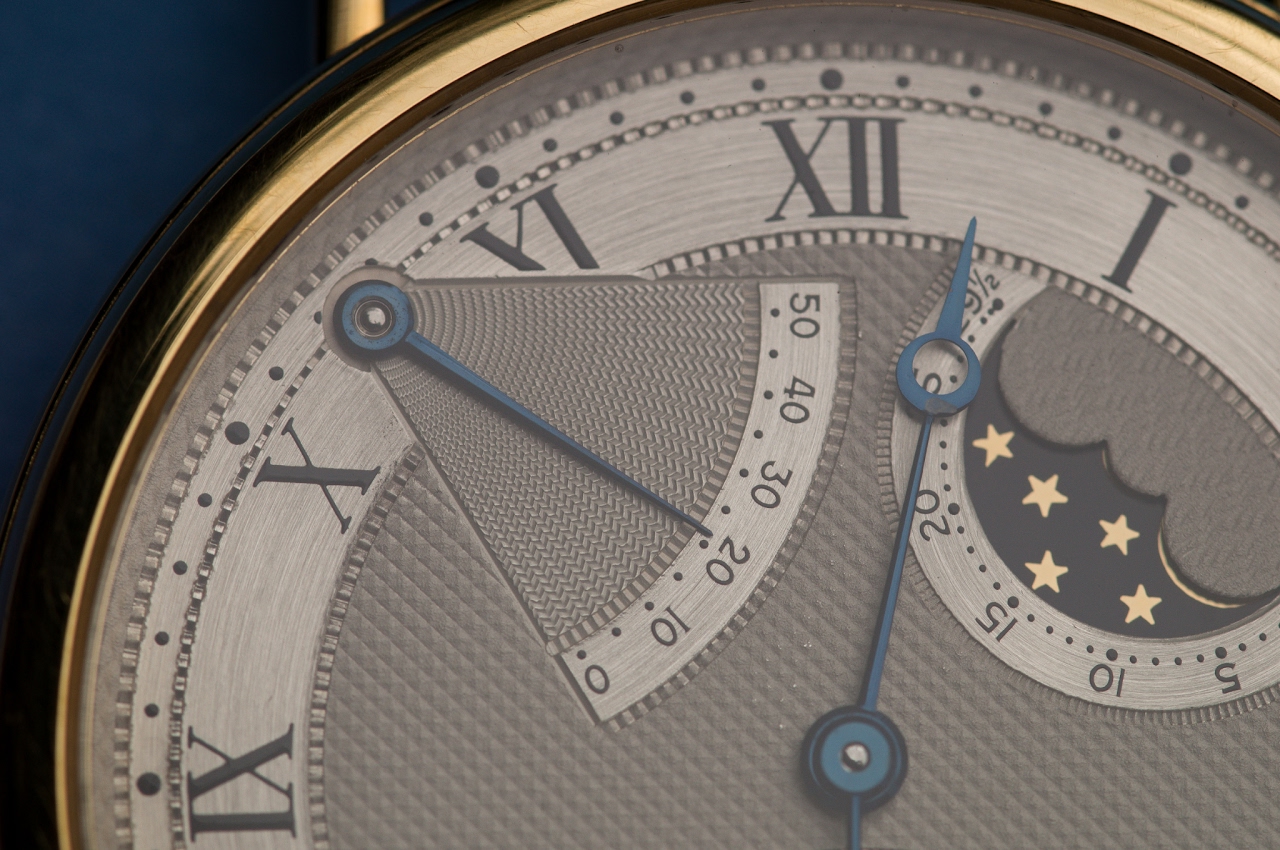 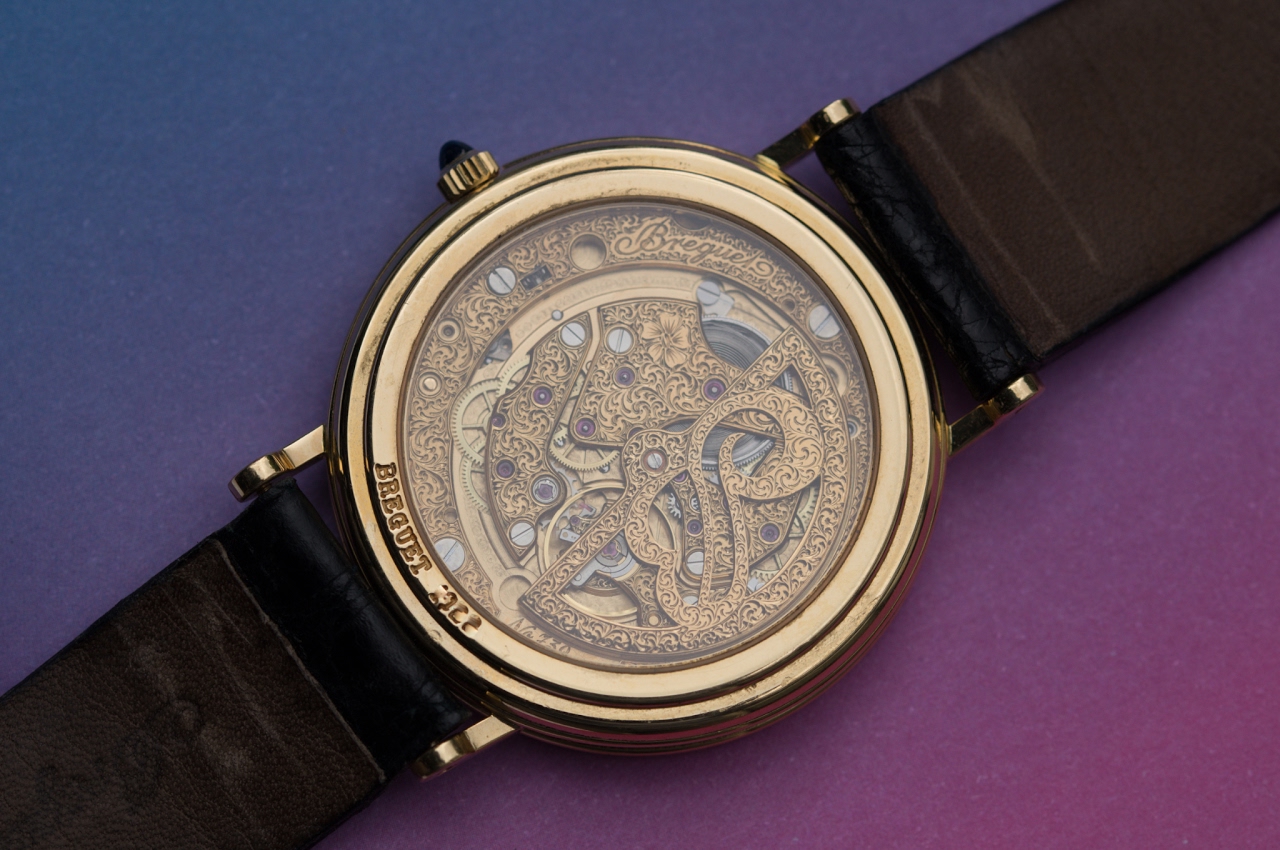 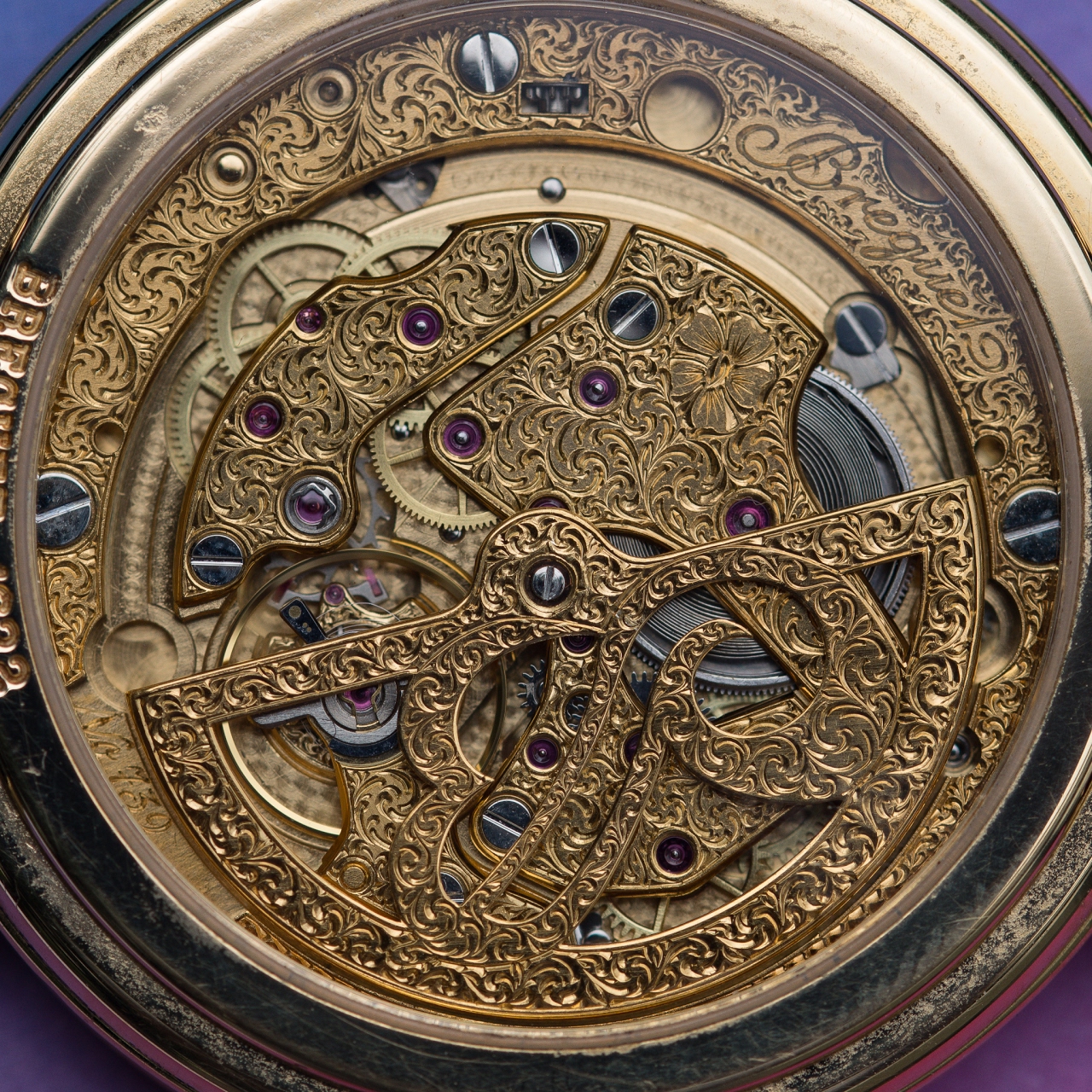 Two Breguet wristwatches from the era of Chaumet, Bodet and Roth

By: gadalex : October 21st, 2020-08:57
On the 23rd September last year I attended an evening preview at Sotheby’s in London, firstly to congratulate an old friend on his new book being presented at the same event, and to handle two 1980s Breguet wrist watches that a friend had shown interest i...
login to reply

These are two beautiful examples...

I have received comments elsewhere critical of the quality of the engine turning.

By: gadalex : October 21st, 2020-09:09
But I think that is somewhat harsh as it neglects to take into consideration the context of what a luxury watch was in the wake of proliferation of quartz. There was oddly an element of cottage industry as those brands that emerged in the late 1970s and 1...
login to reply

I appreciate the more handmade look of these...

By: mdg : October 21st, 2020-09:15
...the modern versions are beautiful, but look as if they were done by a computer. Valuation aside, I would always take a watch that looked like a Daniels or Smith (early) over a 'perfect' watch. I want to see the hand of the person who made it.
login to reply

I'm with you, and they sit beautifully on the wrist. [nt]

They are indeed good looking pieces and good values! [nt]

Would the PC leap year dial mean it was made for a German client? [nt]

By: gadalex : October 21st, 2020-09:59
The watches were consigned to the same sale most likely by the same client. They were manufactured in consecutive years ('86 and '87) and we know that the 3130 was sold in Dusseldorf, May 1986, which would lead me to believe that they ended up in the same...
login to reply

Interesting article and history of Chaumet...

An interesting pair of watches from a turbulent time. [nt]

I don't have the up-close knowledge of Breguet that others commenting here, so I'll just limit myself to saying how staggeringly beautiful these watches are. [nt]

They are wonderful pieces.

By: gadalex : October 21st, 2020-13:38
Funny thing is I only started investigating once I had the chance to photograph them because the caseback of the perpetual held some intrigue. It was certainly worth the effort.
login to reply

By: Rosneathian : April 17th, 2021-22:00
This has involved coming across written pieces where you were involved, some quite high-profile coverage in the watch media, IG (unavoidably) and the complete catalogue of his work reconstructed from back issues of Europa Star. You could say I'm smitten. ...
login to reply

Great post! These watches are Marvelous. I have always wanted to write Mr. Roth and express my appreciation. [nt]

By: gadalex : October 21st, 2020-13:39
I did write Mr Roth with some questions about the references mentioned in the post, but alas I have yet to receive an answer!
login to reply

By: Speedie74 aka Mr. Torquise : October 21st, 2020-11:36
with beautiful pictures, thanks for it! I didn’t know that Roth was also at Breguet, I was aware of the fact, that he worked for Audemars. But if I compare the dials of the first Roth watches with these Breguet’s, the similarity is obvious. As for the gui...
login to reply

Hi Adam. Thank you for your comments.

By: gadalex : October 21st, 2020-13:43
Mr Roth certainly played a pivotal role in Swiss watchmaking in the the 1980s and early 90s. I am preparing an overview of guilloche dials on watches from the 1970s to the present day, but haven't yet delved too deeply into the operation of the machinery....
login to reply

By: VinnieD : October 21st, 2020-13:03
I remember my great uncle - who used to be in the diamonds trade - telling me about these stories. Jewellery in the 70s and 80s must have been quite something with on one hand capitalism running wild in Western societies and on the other hand oil riches a...
login to reply

Thank you! I can only imagine what it would have been like. Francois Bodet elaborates on the type of client Breguet was attracting back in those days in the short book that charts his recollections of that period. [nt]

Thank you and i'm glad you enjoyed it. [nt]

Thank you for this very informative thread.

Glad you enjoyed it and I'm a big fan of the Tradition line! [nt]

What a great read, thanks a lot for all these pics and info. [nt]

2 amazing examples from the Roth era. Thanks for sharing [nt]

I am ashamed to say that I didn't know that Daniel Roth worked with and for Breguet! That's a very interesting article, Baruch. I like these close ups you posted at the end of your article. [nt]

Well I guess I am glad you learnt something new from the article! [nt]

By: Spencer Karrington : October 23rd, 2020-03:31
While they are part of the Swatch group, i love how, while they have sort of strayed around from the handmade details, they still try to uphold the values of breguet and the brand as well as the aesthetics which makes them one of my all time fav watch bra...
login to reply

I am in agreement. I'd love to own either of them! [nt]

By: mikephuvie : December 3rd, 2021-15:38
Hi, during my search for a Breguet I came across your article on WPS board. I just want to let you know that there is a reference 4259RE that I came across which is identical to the 3050. This could possibly be the predecessor to the 3050. Or perhaps Breg...
login to reply

Thanks for the info.

Here are some pics