There are some 777 movements with defined interior angles, but there doesn't seem to be a pattern with the varying levels of finish

This example below, taken from the deconstruction by The Naked Watchmaker, showcases two defined interior corners on the 777 movement. While admittedly not the cleanest execution, shows some of the effort needed by hand to execute the anglage. The anglage also appears to be wider and more rounded. 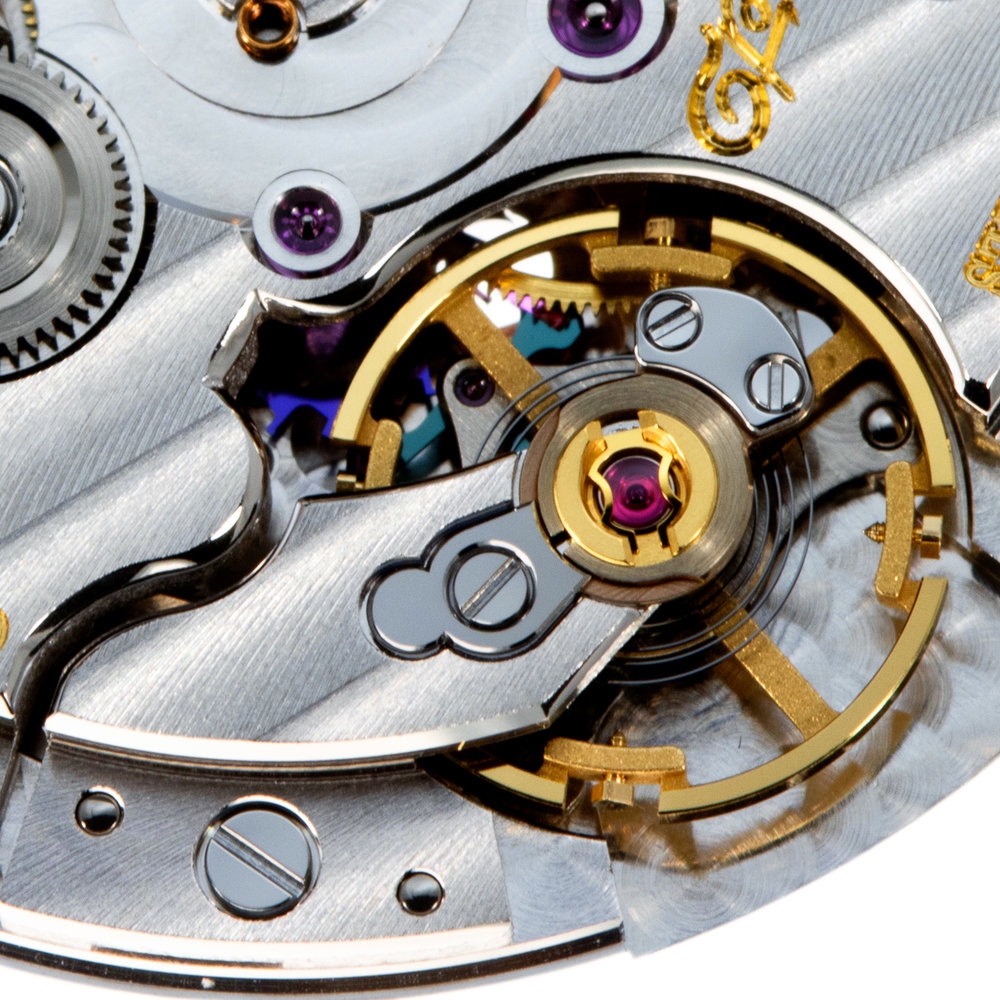 Here is another example from SJX, taken from the 777 inside the relatively recent 5177 with blue enamel dial, released last year. This also exhibits the sharp inner angles. 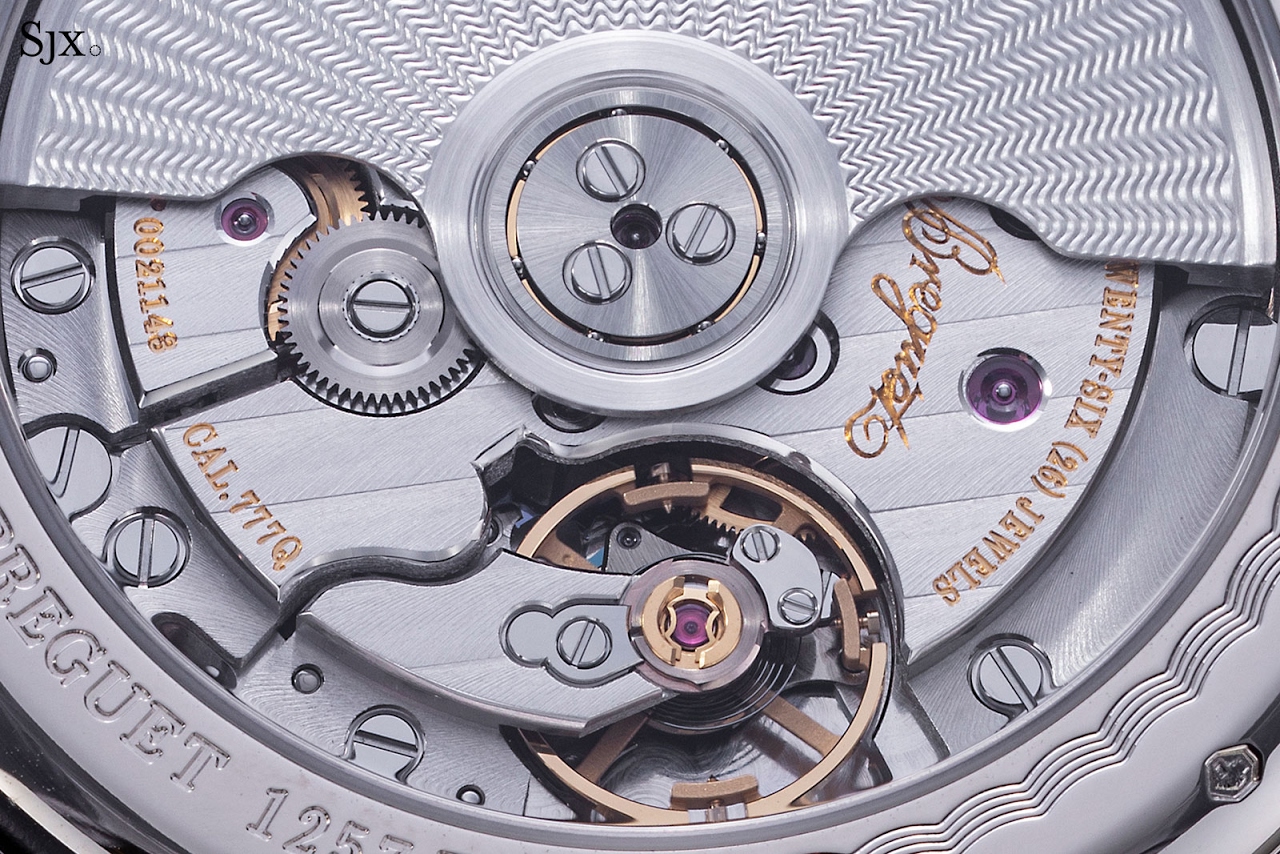 Thus I find it odd how some variants of the 777, even till today, exhibit different levels of finishing (I believe that SJX photo that you've posted is taken from a Hora Mundi, which is at a significantly higher price point too!).
There doesn't seem to be a consistent standard or pattern in Breguet's case, unlike some other brands. For instance, Chopard differentiates their movements as different cal., with the 1.96 being their most well-finished example, versus the other variants of the 96 which have less finishing and features (such as missing the swan neck and overcoil hairspring).
Nevertheless, regardless of the different level of finish, it is always nice to see that Breguet does put in effort to ensure the anglage is still finished to ensure that the machining marks are removed, or minimized.
Regards,
skyeriding

By: @Patek_Ambassador : October 17th, 2020-13:53
I watched a recent video by Tim Mosso from Watchbox where be reviewed a new release of an Offshore and in the video he said that AP ROO movements are hand assembled, but machine finished. Is this true? Does AP really not hand finish these movements? It is...
login to reply

Don't know about RO's but it's not uncommon for mass produced watches. [nt]

Exactly. I have been purchasing Offshores for years and could care less.

By: MichaelC : October 18th, 2020-06:02
Never expected they were hand finished; in no way diminishes my interest.
login to reply

Most are machine finished , journe for example does as well [nt]

We shouldn't get too worked up when brands talk up their own credentials; branding is about bending reality.

By: Age_of_Surfaces : October 17th, 2020-14:07
In the case of Audemars Piguet, they also use movements developed for them by Vaucher Manufacture. This facility is part of the Parmigiani group in Fleurier, and supplies many high-end brands. Another Parmigiani facility builds and finishes dials for bran...
login to reply

Honestly that’s the first time I hear about it [nt]

Hi, Re: AP and Vaucher, I based my remark on the review by Monochrome Watches

By: Age_of_Surfaces : October 21st, 2020-09:28
Source: "Hands On - Audemars Piquet Royal Oak Self-winding 34mm," dated 7 Oct 20. The Audemars Piquet website states only that this new release operates on a self-winding 5800 caliber. It does not mention where the base caliber is from. This is one exampl...
login to reply

As far as I know, yup

By: batholith : October 17th, 2020-14:22
the only ones that get a substantial amount of hand finishing are the Jumbos. As our other colleagues have pointed out, pretty much standard practice for all but special models or small scale manufacturers.
login to reply

By: Fastwong : October 17th, 2020-14:29
The offshore really gets shafted for the $ imho. Stamped dial, steel vs white gold bolts, rubber strap (usually), chrono module on an undersized movement, I do like the aesthetics of the ROO and have thought about getting one as an ultimate beach watch bu...
login to reply

By: Weems@8 : October 17th, 2020-14:37
Many crafts are a secret. It stop copying from each other. Transparency is important, but it can take away some magic. The same as an illusionist tell the trick.
login to reply

By: patrick_y : October 17th, 2020-14:39
It's all those Patek Philippe fan boys and Audemars Piguet fan boys who spread incorrect information and assume that because it's got a reputable name on the dial that things are always good. A lot of the AP RO Offshore Chronographs are just generic Frede...
login to reply

Haha, I'd take the f piguet movement, that's a great moment, but I think that's the royal oak chronos.

Correct. Dubois Depraz in ROO it was. [nt]

Oh! Oops! My memory is not what it used to be! Apologies! [nt]

Next thing you'll tell me is that...

Most Pateks are only machine finished, from time only through annual calendars, at least. At the upper end, both AP and Patek have some handwork.

By: Spangles - Mr. Tabby : October 17th, 2020-14:53
Meanwhile, an entry-level Breguet dress watch, the 5177, has two interior angles as a little sign to those in the know that they do finishing by hand. Lange, of course, does hand finishing as well, so some brands are keeping the traditional skills alive.
login to reply

Interesting insight. With all due respect to Breguet, at the end of the day, i would say the PP finish looks much more spectacular ("shiny")

WOW, I wonder if this also shocks the poster. [nt]

This is not necessarily true anymore, unfortunately

By: skyeriding : October 18th, 2020-20:49
In some 5177 movements (I'm unsure if this applies to all new 777Qs), the interior angles are now replaced by rounded ones which are likely done by machine. This can be seen in this video at 0:41, officially from Breguet: Regards, skyeriding
login to reply

I think this is just the video, not a change in production.

By: Spangles - Mr. Tabby : October 19th, 2020-03:58
Here's an actual picture: We're not taking about Dufour, the interior angles are hand finished in both cases, though. Just here they are more shallow on the entry level Breguet. Also, it is likely the hand finishing on this Breguet is just that: The finis...
login to reply

There are some 777 movements with defined interior angles, but there doesn't seem to be a pattern with the varying levels of finish

By: skyeriding : October 19th, 2020-14:07
This example below, taken from the deconstruction by The Naked Watchmaker , showcases two defined interior corners on the 777 movement. While admittedly not the cleanest execution, shows some of the effort needed by hand to execute the anglage. The anglag...
login to reply

I appreciate you taking the time to look more deeply into this, it's part of what I love about this community.

By: Spangles - Mr. Tabby : October 19th, 2020-18:36
And I have a possible proposal for why very recent examples of the 777 movement line look a little better than earlier ones, such as the Hora Mundi example: Breguet is upping its finishing game. The skeletonized tourbillons are part of this. They require,...
login to reply

I think now it all matters how you choose to represent your brand and/or model through a great celebrity and superlatively correct marketing!

Just to explain this in a bit more detail....

By: jleno : October 17th, 2020-19:50
When people talk about machine finishing, what they're typically referring to is the anglage on the bridges. Machine finished anglage will often look flat and may have slight vertical striations visible left over from the machining process. What you ideal...
login to reply

By: Rapwatch : October 18th, 2020-05:44
It's not factually false, but its not true to its implied meaning to the average watch buyer ether. The companies like to maintain the illusion of some decades experienced watchmaker obsessing over the perfect assembly of your 'precious'. Mass production ...
login to reply

By: watch-er : October 18th, 2020-07:33
for a uniform perfect finish to eliminate irregular aspects from hand held tools. I suspect few if anyone hand finishes plates these days.
login to reply

Hi, we are touching on the reason Patek left the Geneva seal when they increased their production by 11 times or more

By: Spangles - Mr. Tabby : October 19th, 2020-04:03
The Geneva seal requires that hand finishing be a final step to remove all machine finishing marks such as those helpfully pictured earlier in this thread by jleno. Patek avoided the work and expense and craftsmanship by abandoning this step in a majority...
login to reply

By: Age_of_Surfaces : October 21st, 2020-09:35
It's quite a change. In the late 19th century it would enter observatories and trials, and win. Its performance chops were part of its allure. Perhaps it's the increase in volume that you mention, added to its pivot to stressing heritage and exclusivity, ...
login to reply

I just want to say Thank You for all the well-informed, evidence-based comments in this thread. It's a learning experience. [nt]