Yet more of this most excellent watch, the first gen DS, reportedly the best finishing Lange has ever done, and compared to the Patek 5170p.

This was another exercise done for a watch group I recently joined, I do hope you enjoy and would very much appreciate your thoughts and comments on what you see. 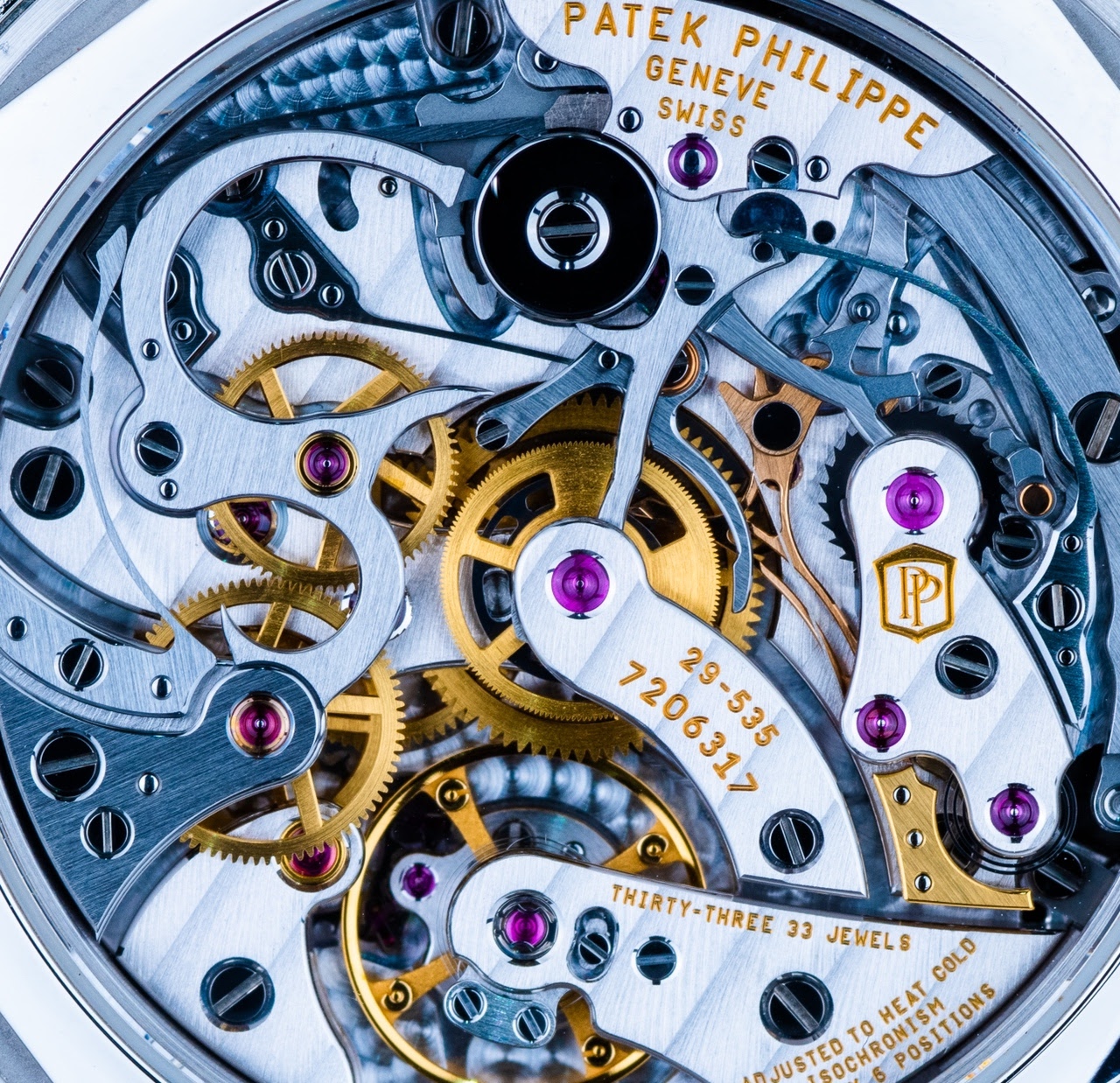 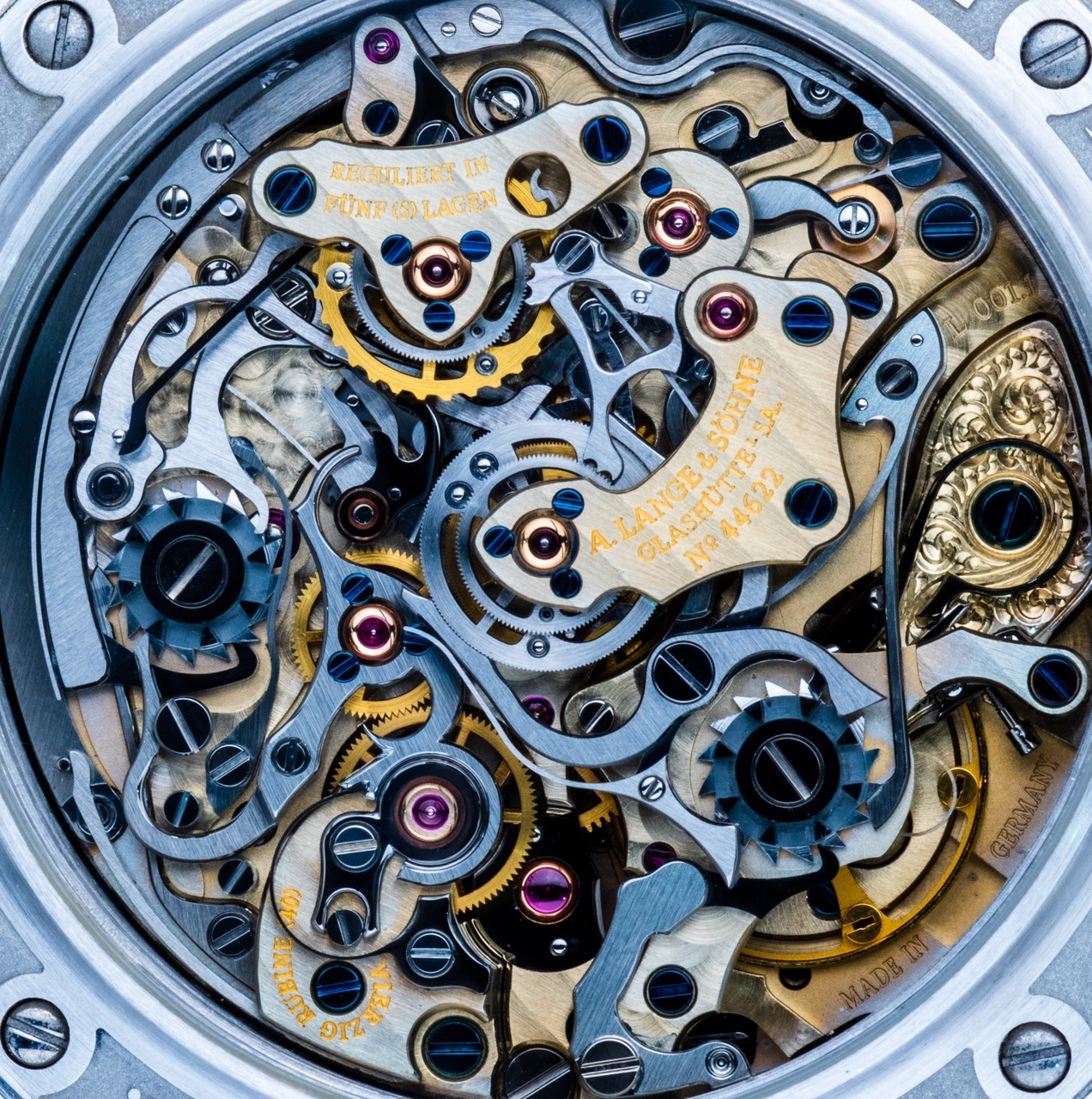 By: afaleh : January 18th, 2022-18:28
Yet more of this most excellent watch, the first gen DS, reportedly the best finishing Lange has ever done, and compared to the Patek 5170p. This was another exercise done for a watch group I recently joined, I do hope you enjoy and would very much apprec...
login to reply

That is something else, thanks for posting these. Amazing !

Just wonderful to see these two compared to one another, thank you for posting this.

By: g_schroder : January 19th, 2022-15:31
Both are absolutely wonderful and unique in their own way. I have to admit, while I find the Lange to be a more pleasing view primarily due to the use of German silver and the hand engraved balance cock, beyond that I'm in the camp that says the two are f...
login to reply

It is a cruel comparison for the Patek, here, in terms of finishings.

Thx for pics. Not surprised tho.

By: enjoythemusic : January 18th, 2022-18:57
Yes, makes sense why great craftspeople are starting / joining 'smaller' independents. It truly does bring joy that impressively talented parts and watchmakers are now able to produce the quality they know is possible beyond typical 'corporate standards'....
login to reply

Amazing comparison pics, thank you! I'm still taking it all in but wondering, would a Datograph be finished to finished to a lesser level? A 5370 to a higher level?

Both are excellent! But keep in mind of the material differences!

By: patrick_y : January 18th, 2022-19:51
Keep in mind, Lange movement parts are made of German Silver which is a material where a higher polish is able to be achieved, compared to the rhodium plated brass movement parts that Geneve style manufacturers use. Thus, a comparison between the two isn'...
login to reply

Can't agree with you more, Patrick. Also to consider is the thickness of the bridges and parts.

By: patrick_y : January 18th, 2022-20:12
The thickness gives a special rigidity among other things. Finishing ultra-thin movement parts is exceptionally difficult, as the parts are so thin that you don't want to damage them or distort them while finishing them. Neither of these are ultra-thin mo...
login to reply

WOW! Amazing set of pictures! Thanks for this!

I love (and own) both brands, and these chronos are both beautiful. In this comparison, Lange wins hands down.

By: houstonian : January 18th, 2022-20:22
But a fairer comparison would probably be 5170 vs 2nd Gen 1815 chrono. Introduced around the same time and same level of complications.
login to reply

Yes, I think it would too.

Lange is a class of its own. They produce roughly 5000 pieces with a high degree of manual work. Patek 10 times more in a far more automated way.

+1. Lange perhaps the best finishing and movements of the corporate brands.

Fantastic macros! In this particular case Lange all the way.

By: Francoamerican : January 18th, 2022-20:51
Vacheron is currently better it appears in an apples to apples comparison. Lange is of course a wonderful "orange."
login to reply

Where are the many inward angles in the Lange movement?

there aren't many - but at least they are there

The way Patek avoids having those sharp inward chamfers is really blatant too...

By: Zarium : January 22nd, 2022-07:27
And it's not like it's a recent practice. But their most recent movements are especially egregious; see pics attached. The 31-260 is incredibly cheesy in its execution of avoiding as much as possible having internal anglage, to the point it feels like the...
login to reply

By: Francoamerican : January 22nd, 2022-17:53
It makes you wonder how much theyre able to automate in the new facilities they’ve built.
login to reply

Patek is nice but The Lange is on another level

By: descartes1 : January 18th, 2022-23:04
Also, I don’t understand why Patek puts a cap on the column wheel. It’s one of the most fascinating parts of the movement. Why cover it? The cap looks like something unappealing is being hidden and there’s nothing attractive or interesting about it. ...
login to reply

Because column wheels cannot be properly finished (the reason, previously explained, eludes me). Look at the rough surfaces of the Lange column wheels. Not pretty. In contrast, the Patek column wheel cap is nicely decorated with black polish and anglage.

If I'm recalling correctly, it's a historical artifact -- one of the requirements for the Geneva Seal

By: Zarium : January 22nd, 2022-07:34
Something about column wheels having to be capped or nicely decorated in some manner, not simply left unadorned. Vacheron Constantin's chronograph column wheels aren't capped like Patek's are, yet have the Geneva Seal, though, so I'm sure there's somethin...
login to reply

Just going to throw this out there: don't see what you guys are seeing

By: mafoofan : January 18th, 2022-23:29
It seems to be the internet-wide default position that Lange finishing is better than Patek's. Maybe true, maybe not. However, when I look at photos like these, I don't see any observable difference in finishing quality. Yes, the style is very different, ...
login to reply

By: Francoamerican : January 19th, 2022-03:53
the position that Lange is better finished than Patek (at this price point) is based on a number of factors but one such example is Philippe Dufour asserting Lange was the best finished production watches (or some such). I also personally see the anglage ...
login to reply

This is just repeating what’s been said, no? If so obvious from photos, why not discuss with specifics?

Hi Mafoofan, I think the easiest way to start to see what we see is to watch videos of these magnificent beauties.

By: houstonian : January 20th, 2022-02:58
Seeing them in 3D is far better than a flat photo from directly above. I don’t think I can post links (bc it’s sales) but google old sales videos from a well known online reseller… forward to the points where inevitably he turns the watch over and talks a...
login to reply

I’ve seen many videos and examined the watches in person.

By: mafoofan : January 20th, 2022-06:22
I’m less interested in overall impressions, which are prone to style preferences, and more interested in specific details that folks feel distinguish the quality of finishing execution between one movement and the other.
login to reply

I'm curious about specifics too, just to learn about the differences...

By: CR : January 22nd, 2022-17:45
Whenever anyone says "a Lange ___ movement needs to be compared with an equivalent Patek ___" movement, I wonder, "Exactly how much time, effort, and skill does it take to build and finish each of those supposedly comparable movements?" I'm less intereste...
login to reply

Wow. Glad I clicked on this thread

By: Nicetomeetyou : January 19th, 2022-00:50
I’ve heard the only sad thing about Lange movements is that the patina on the german silver disappears upon factory servicing.
login to reply

By: afaleh : January 19th, 2022-06:08
Really glad we have this discussion going, I am learning quite a bit as I read through these response and online articles. Let’s keep going with more specifics please
login to reply

Great photos and an interesting topic

By: russell996 : January 19th, 2022-08:38
A better comparison I venture to suggest is to compare the 5370 movement to the Double split. The 5370, and all the more complicated pieces above it in the Patek Grand Complications line up, are double assembled just like the Lange and the finishing is su...
login to reply

If this is going to be the comparison,

By: Time to watch : January 19th, 2022-21:31
I will say that I’d take the finishing and wearability and dial beauty of the Patek over the Lange. Sure I have a horse in this race, but my decision was based on the above. Finishing alone is not the end all be all. Patek excels in the total package. I f...
login to reply

By: houstonian : January 20th, 2022-02:38
I agree that Patek dials and case shapes are generally more creative and more artistic than Lange, and I typically find them more attractive. It seems like some are offended if Patek isn’t voted best in every area. In the area that OP was asking about (mo...
login to reply

But no brand is ahead in every area.

By: Time to watch : January 20th, 2022-03:50
There are always compromises that have to be made. Lange is not only ahead in movement finishing but also in price. Most Langes offer great value when compared to similar pieces from their competitors. An 1815 chrono vs a 5170 is an example.
login to reply

Was at the AD the other day

By: montecristo#2 : January 21st, 2022-13:05
Had my Gen 1 Datograph on and had the opportunity to compare to a Patek 5960. I would pick the Lange as better across the board. Design, feel, presence, dial, movement, finishing…. It is basically a rout. Of course a lot of this is personal preference of ...
login to reply