The link between 16 years of the Lange history

In 2011 was presented the latest version of the Saxonia Handwind: 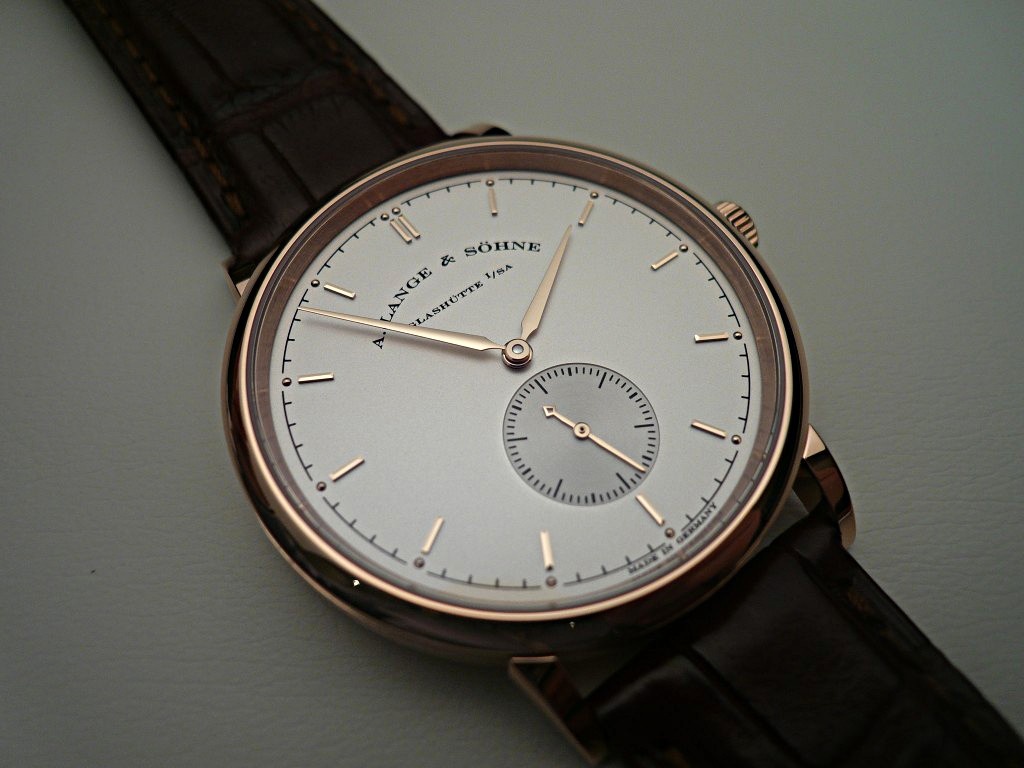 This fine and elegant watch features a 37mm case and some little design changes when compared with its previous version. But I will not come back to them. The most interesting part of the watch remains its movement.

Lange presented at the 2011 SIHH 5 new movements but this Saxonia doesn't belong to the list of the watches using a new one. It houses the brave old L941.1 which was first used... in 1995 when the 1815 was unveiled. 16 years of presence in the Lange catalogue!

We recognize it easily on this picture: 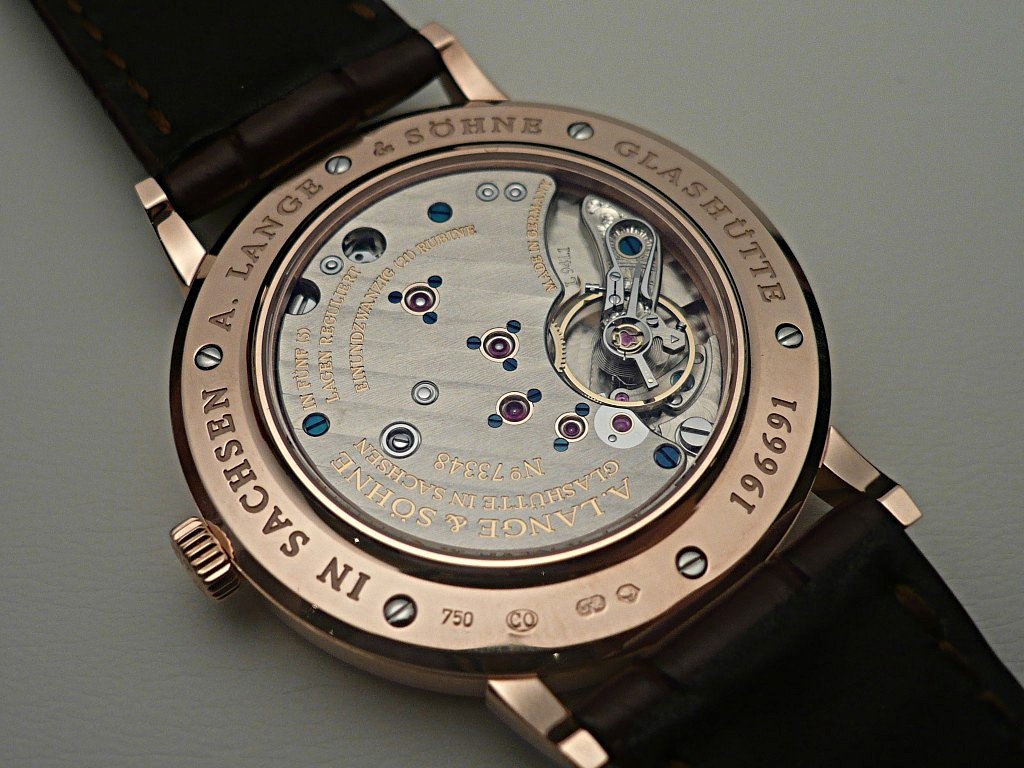 This movement is very important in Lange history because its roots can be found in one of the rebirth watches: the 33,9mm Saxonia. And because it was very frequently the first movement bought by the Lange owners.

This first Saxonia was using caliber L941.3 which is basically a L941.1 with a date display. So, we can say that the architecture of the L941.1 was used from the beginning by Lange. The Saxonia was a radical watch with a small size and a low diameter / thickness rate. The 1815 which was introduced in 1995 could be considered as an "easier" and more appealing simple Lange watch. Larger (35,9mm) and thinner (7,5mm vs 9,1mm), it was also cheaper due to the removal of the date system.

The L941.1 is a 3hz movement with a power reserve of 45 hours (42 hours with the date system in the context of the original Saxonia). It is quite large for a simple movement coming from the mid 90's (25,6mm) and it is rather thin (3,2mm). It features 21 jewels, 4 gold chatons and it contains all that make a Lange movement so special at that time:

The edges of the 3/4 plate are nicely chanfered and polished. I know that some people are very frustrated by the movement presentation: the 3/4 plate hides a lot of wheels and parts. But you have to remember than in the mid 90's, Lange style was unique and brought something new in the watch industry.

I had the chance with my own 1815 to use this L941.1 for a very long time... and I still use it with a lot of pleasure. There is something that doesn't appear on the pictures but which is known by any Lange owner: on a daily wearing, the L941.1 is a perfect movement. Winding it is a very smooth experience, an unique feeling. The crown of the 1815 is quite small but thanks to the movement efficiency, it is easy to handle it. 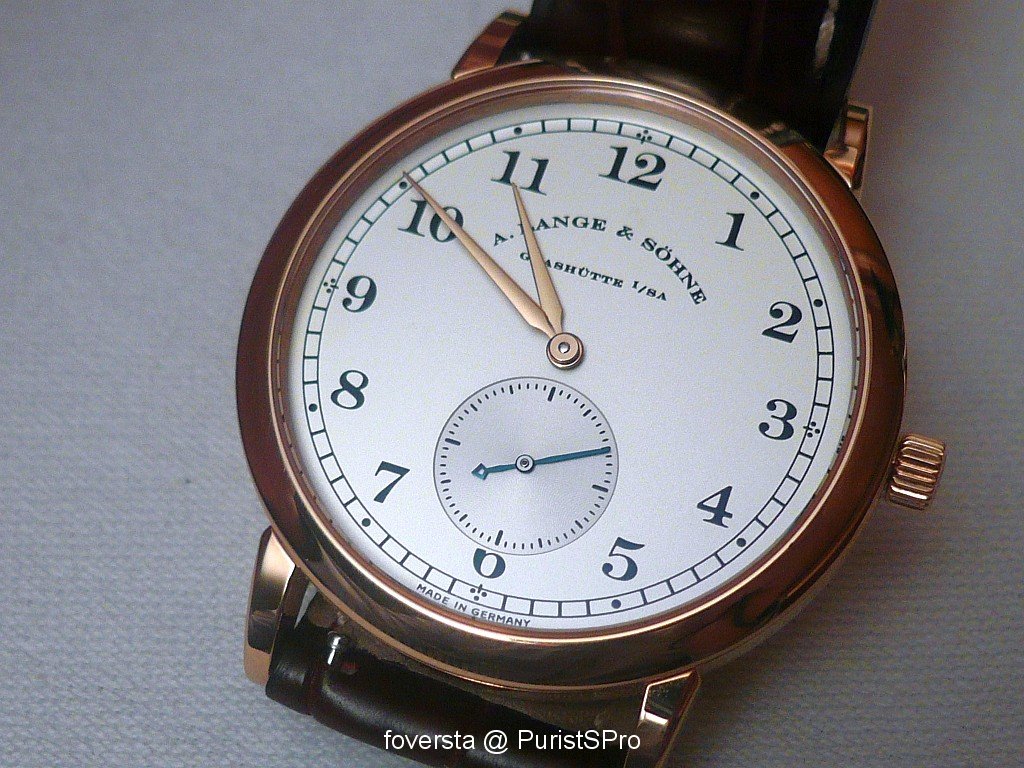 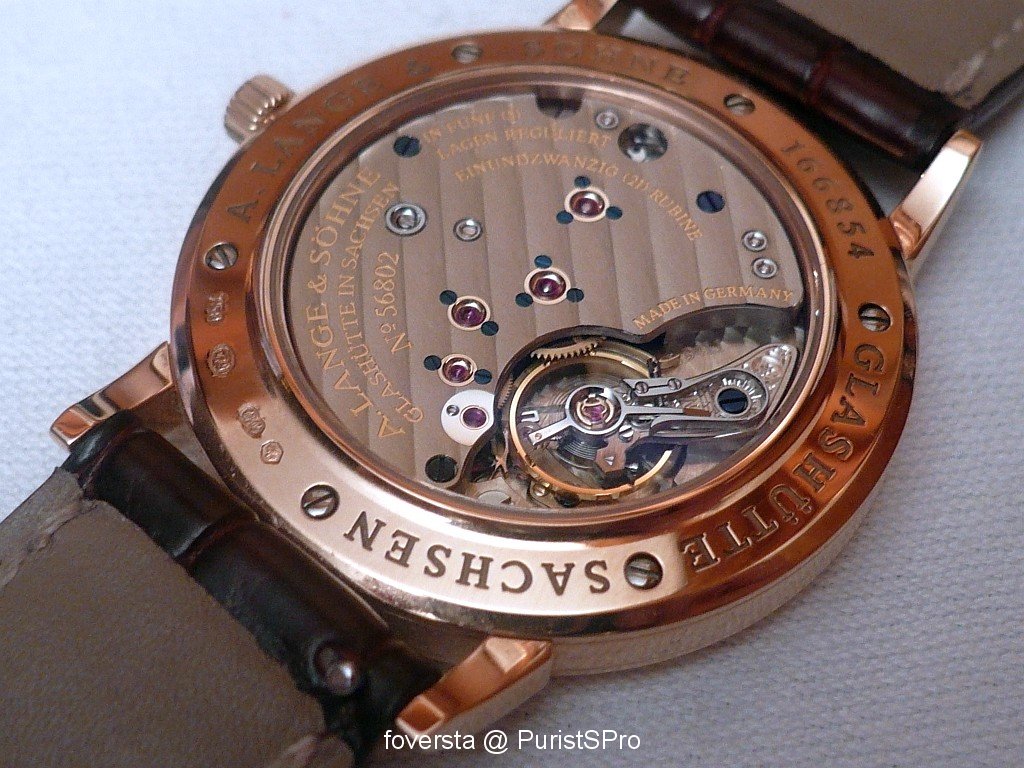 Despite its simplicity, the L941.1 was also a base for other famous Lange watches powering some impressive complications like the power reserve display of the 1815 up and down and... the outstanding moonphase display of the Emil Lange.

With the 1815 up and down, caliber became the L942.1 and kept the main performances of the L941.1... except of course the thickness. With a 3,7mm height, the L942.1was at that time the thinner handwind movement with a power reserve indicator.

We had the opportunity to see again this movement in 2010 in the context of the Homage to Ferdinand Adolf Lange collection: 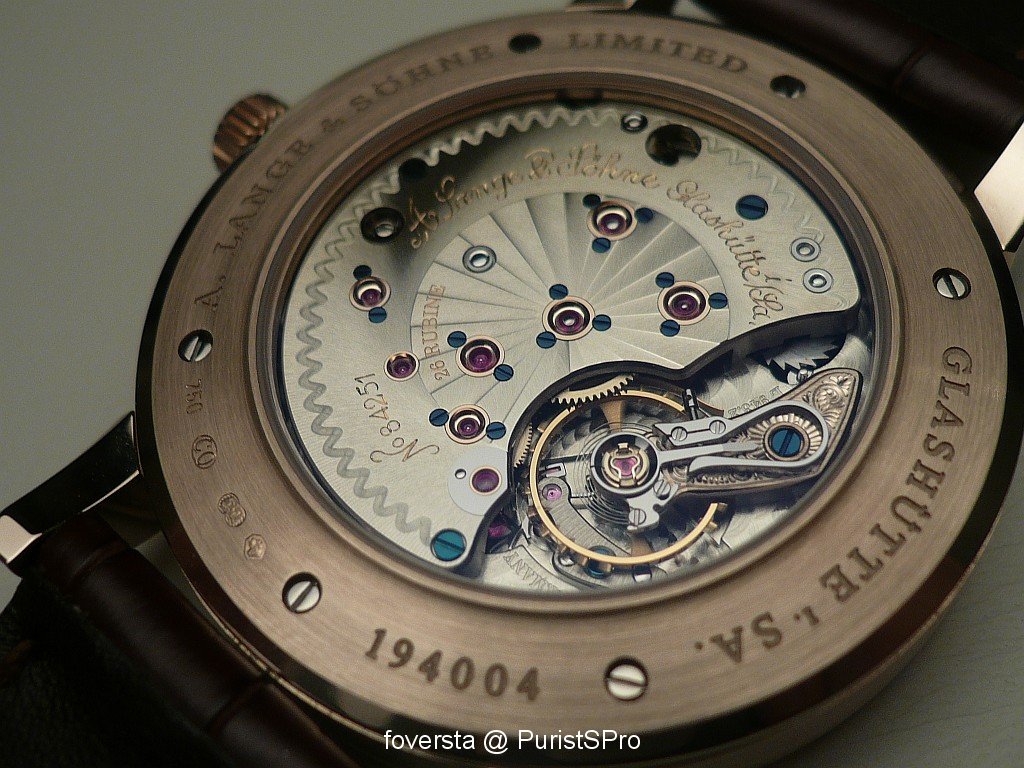 Of course, Lange has broadened its handwind offer now with the Richard Lange movement (the only one with a central second hand), the new 1815 caliber or the Saxonia Thin one. They are larger with an increased power reserve. They also have improved regulation systems and in-house spiral in the case of the Richard Lange.

The Saxonia Thin caliber. You will notice that the ratchet, the crown wheel, the click are visible which was not the case of the L941.1: 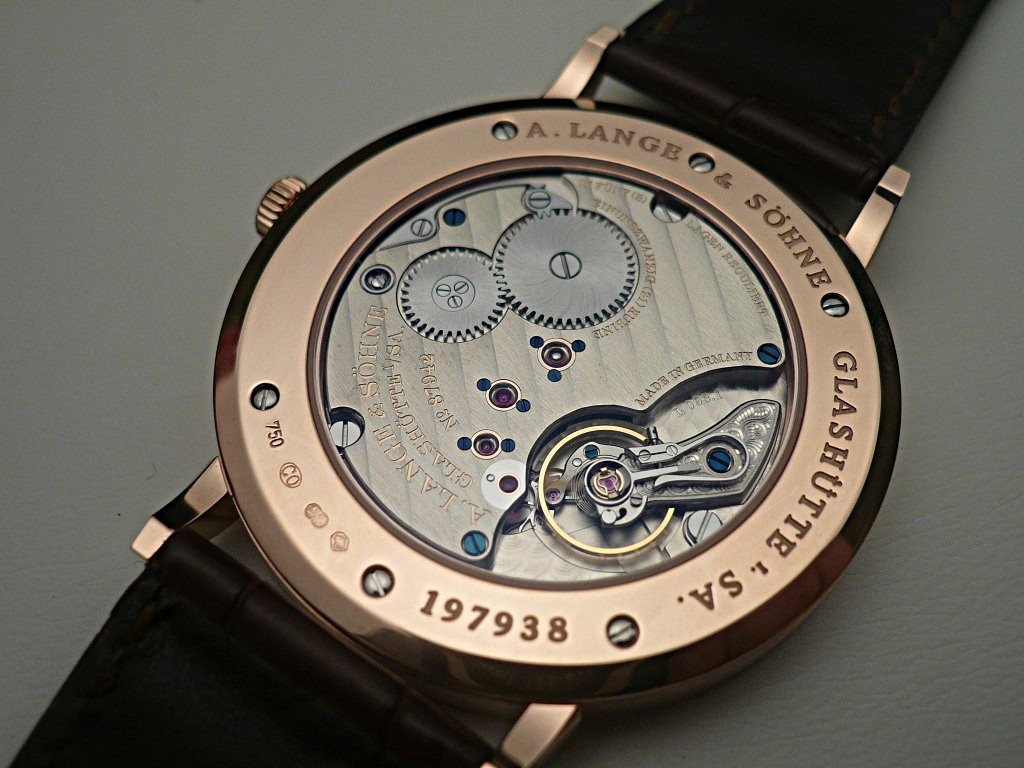 But the L941.1 remains in the collection thanks to its charm, its efficiency... and its links with the past. I don't know why but a Lange collection without the L941.1 would be for me bad news. A brand has to keep as long as possible these connexions with its glorious periods.

Without any doubt, the first 1815 was and is still a superb entry level watch and one of the best ways to enter the high horology world. Caliber L941.1 plays an important role in this feeling.

So I have a special message to the Lange staff: keep it in the collection please and don't replace it one day by another caliber with improved performances! Maybe it is too small for today's cases sizes, maybe its power reserve is too small, maybe... but after all, we don't really care about this. We care much more about the history of this caliber and the influence it had on the Lange success through the years. When you buy a new handwind  Saxonia, there is a little something which  recalls us the first Lange watches... and this is the most important thing when you buy a high-end watch: the tradition and the respect of the roots.

The link between 16 years of the Lange history

By: foversta : September 4th, 2011-05:14
In 2011 was presented the latest version of the Saxonia Handwind: This fine and elegant watch features a 37mm case and some little design changes when compared with its previous version. But I will not come back to them. The most interesting part of the w...
login to reply

By: Davo : September 4th, 2011-14:50
Could agree with you more regarding your final remarks.
login to reply

The continuing usage of that (base) movement ...

By: small-luxury-world : September 5th, 2011-23:53
is different from their "original" approach, but I like it in that case Still think it is one of the best (if not the best) possibilities to enter the world of Haute Horlogerie, if built in in a 1815. Sometimes I think, what else do I really need?! Thanks...
login to reply

By: BluNotte : September 6th, 2011-04:07
And one that NEVER fails to amaze me in and out always! Tschuss und Danke! Stephen
login to reply

By: foversta : September 6th, 2011-11:48
Of course, the movement of your RL PLM is much more impressive but this "small" caliber is also a pure marvel. Fx
login to reply

Much in agreement Xavier!

By: BluNotte : September 7th, 2011-18:06
Then again, i'd like to say that NO Lange calibre, small or large, is NOT a marvel! Tschuss Stephen
login to reply

By: Hororgasm : September 6th, 2011-08:55
Albeit written with a lot of history and details. Excellent and a wonderful lesson for those new, and a refresher for those seasoned. I have never thought of the 941 in these terms, and personally not too sentimental about it, until now. Best. Horo
login to reply

Thanks Horo for your kind words ! [nt]

Surely one of the prettiest watches on the market ...

By: COUNT DE MONET : September 6th, 2011-12:50
Especially the under "40ies" models. The current larger models give them a nice feel of a more "beefy" watch, which is also fine, but the epitome of a pretty, classic watch are the under 40 models. Saw the Saxonia in hw last weekend in 37 mm: lovely, love...
login to reply

I hope Lange hears you:)

It seems they have listened!