A closer look at the Ballon Bleu chronograph, including the new slate grey dial

Launched in 2006, the Ballon Bleu has gone on to become Cartier’s best selling model line, with notable success in China. Most of the Ballon Bleu sold are the unexciting time-only versions with automatic or quartz movements; the Ballon Bleu chronograph, on the other hand, is a gem that is oft overlooked. It was unveiled in 2009 in gold, and only more recently in steel. 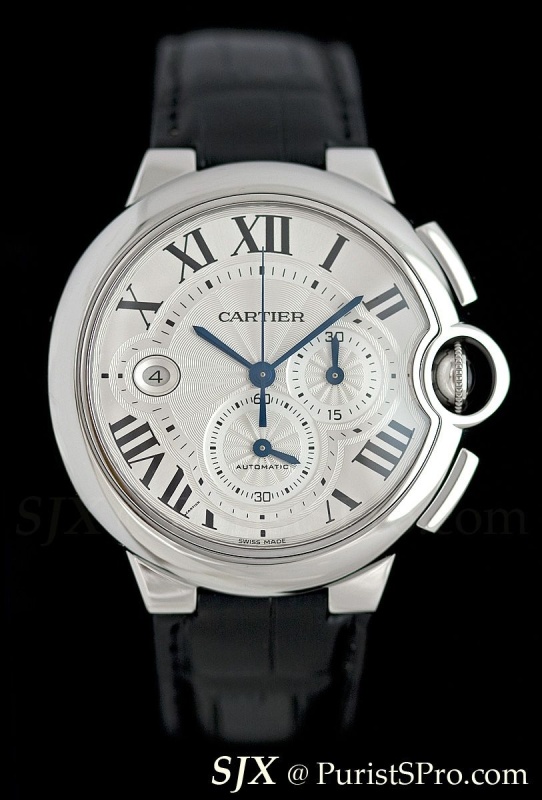 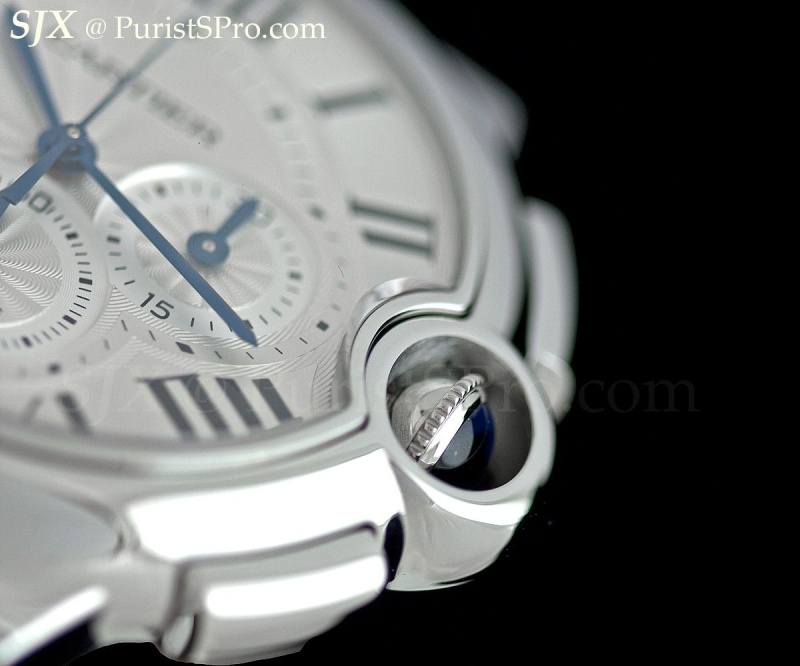 It is a large, 47 mm watch with the 8101 MC calibre, made by JLC exclusively for Cartier. The 8101 MC is the chronograph variant of the 8000 MC, a fairly slim, 11 ½ ’’’ movement with double barrels. While nothing extravagant, the movement finishing is sufficient and in keeping for a watch of this price range. 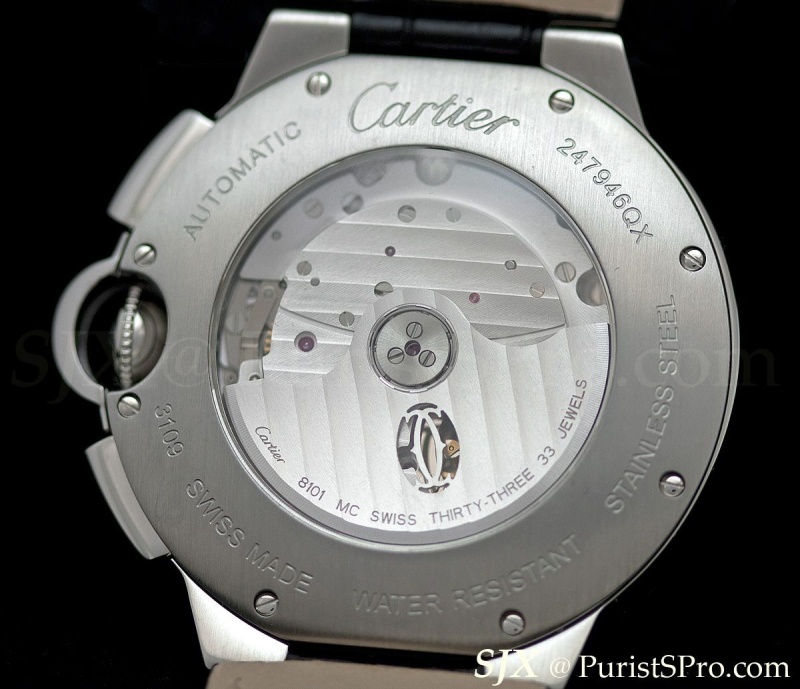 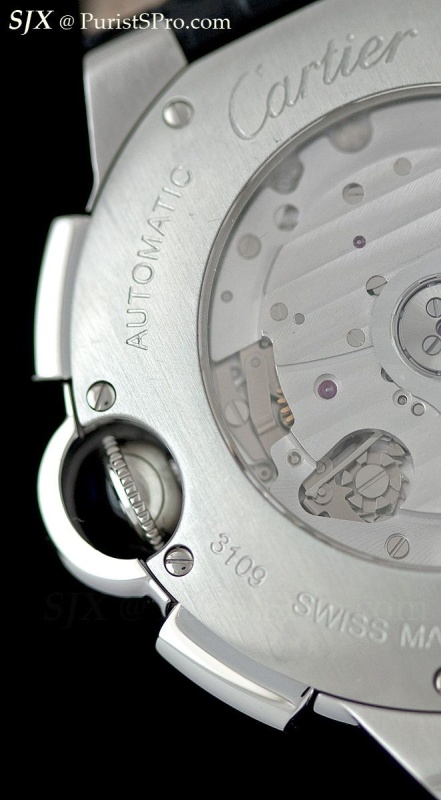 What makes this especially interesting is its price in steel, which is approximately US$9500. This represents significant value, in absolute terms as well as relative to the rest of the Cartier range in the same price segment.

Visually the watch is idiosyncratic, unlike most other Cartier watches. Typically Cartier watches have the formal symmetry of the gardens at Versailles. Though the Ballon Bleu chronograph retains the design elements that are Cartier’s signature like guilloche dial and sword hands, the dial is notably asymmetrical. 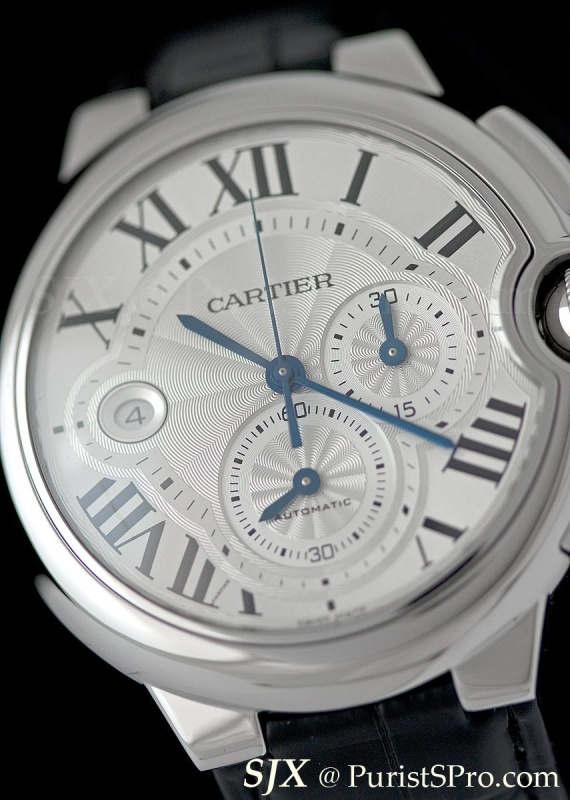 The date sits at nine o’clock while the chronograph counters occupy three and six o’clock. And the minute track of the dial loops around the chronograph subdials and date window, cutting into the Roman numeral hour indices. Typically I see that as a design faux pas but in this case it works very well, giving the dial a quirky, unconventional feel, at least compared to the traditional Cartier. 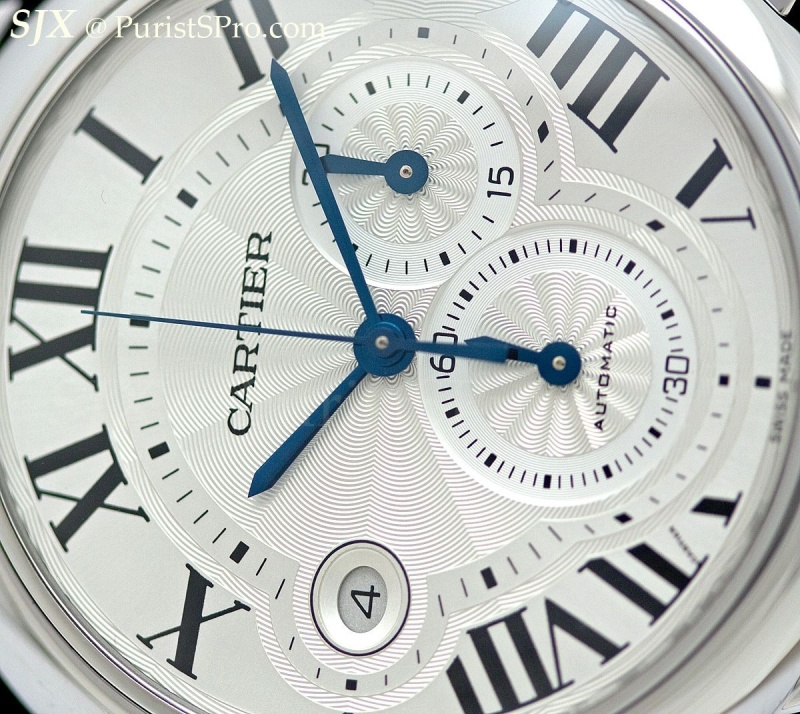 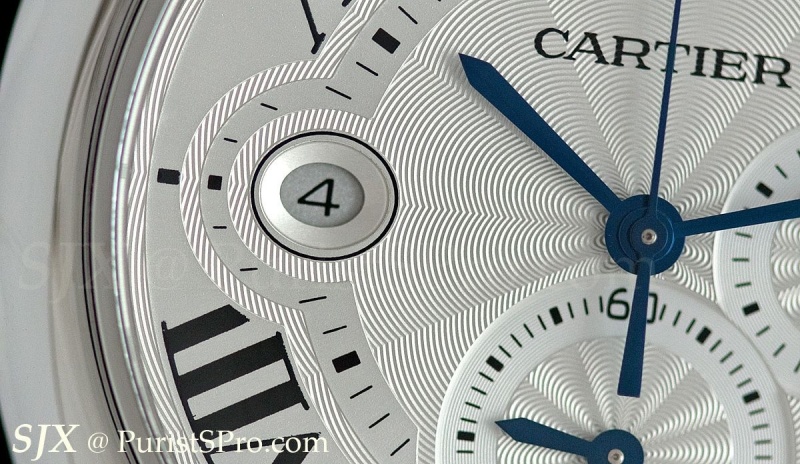 And the newest version of the Ballon Bleu chronograph in steel comes with a slate grey dial which totally changes the look of the watch. The only thing that is different is the colour palette; everything else in the design – proportion, shapes, fonts, guilloche, hands and even the strap – is exactly the same. But it looks totally different. 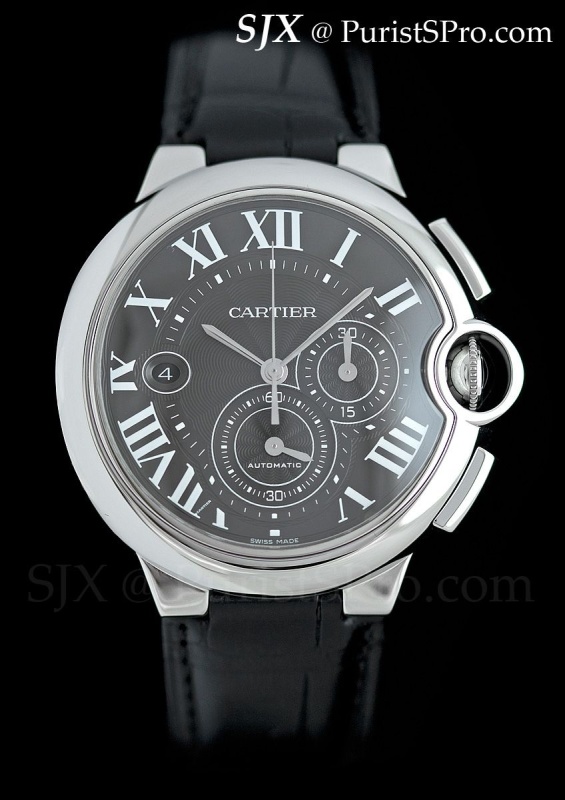 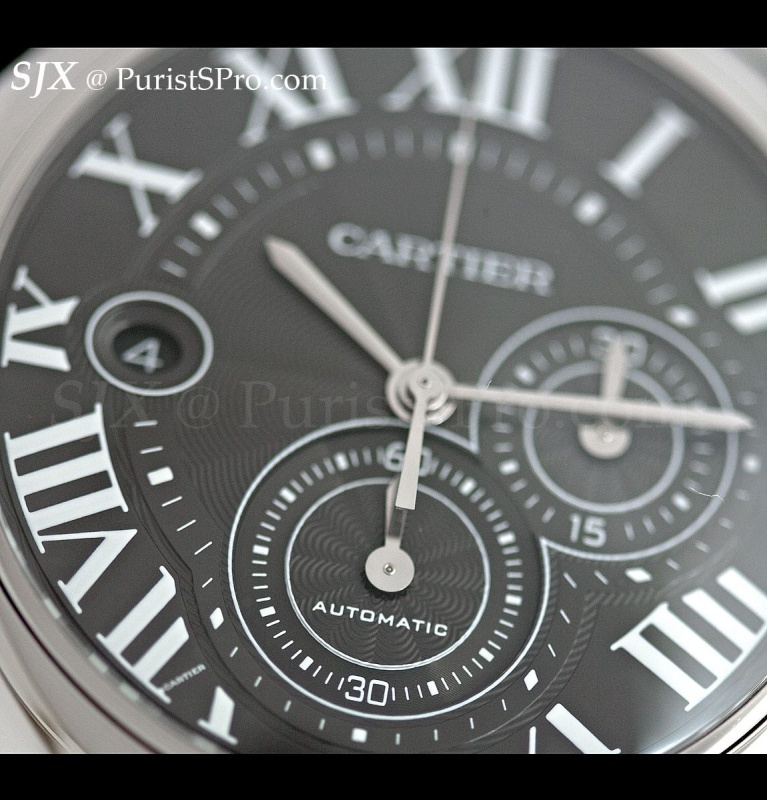 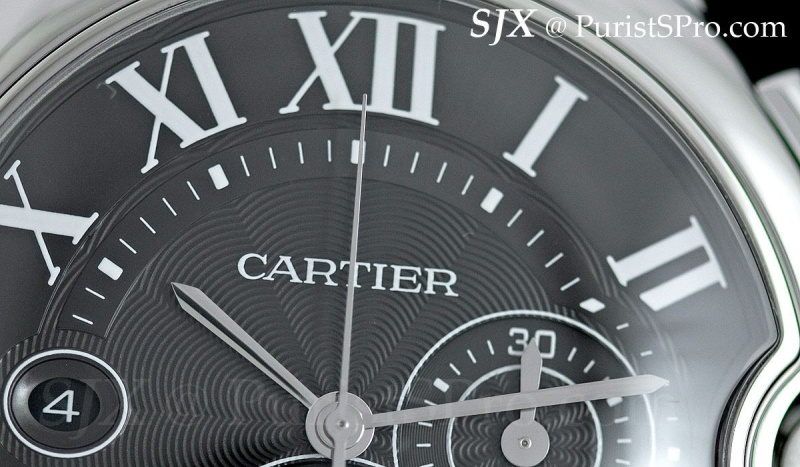 The quirky dial design of the Ballon Bleu chronograph, especially with the grey dial, work very well with the rounded shapes of the case. Everything on the case is rounded, even the side profile of the case is pebble like with domed sapphire on the front and back. The dial is also very slightly domed with a convex aperture for the date window. Similarly the chronograph pushers have round profiles. These rounded shapes have a less formal look than the typical Cartier, which often has a lot of straight lines, think of the iconic shapes like Tank and Santos. The Ballon Bleu reminds me of a slimmed down Botero. 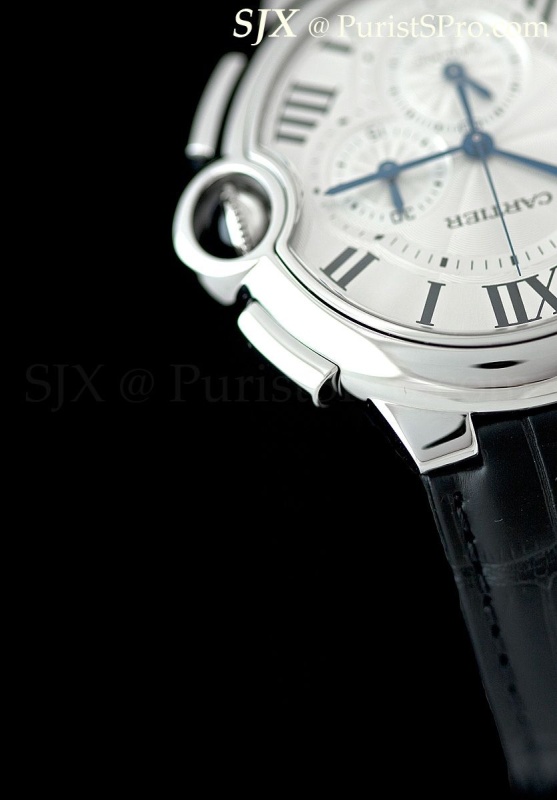 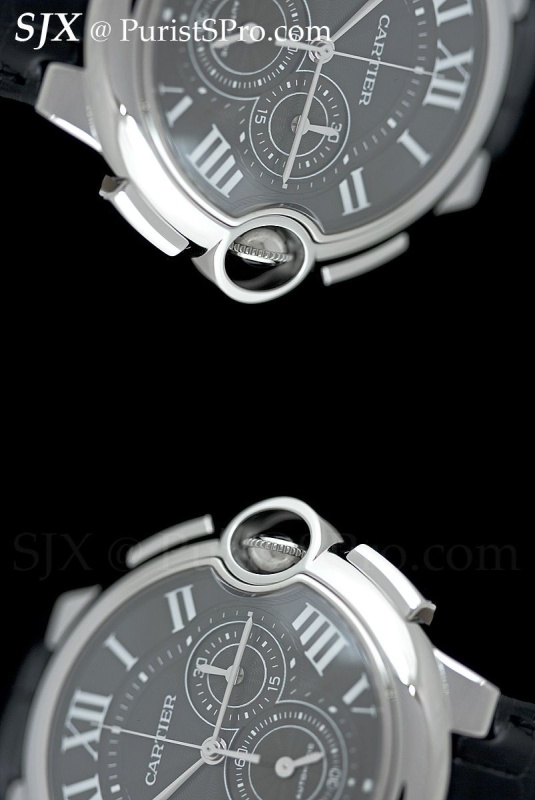 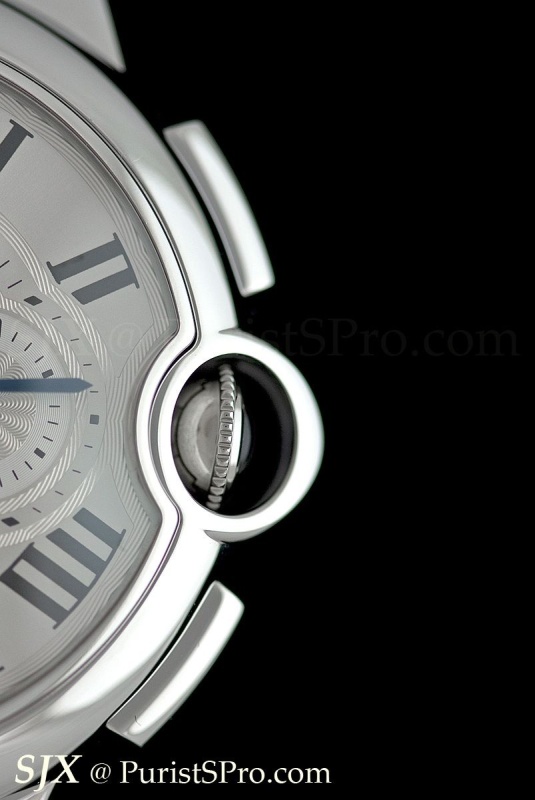 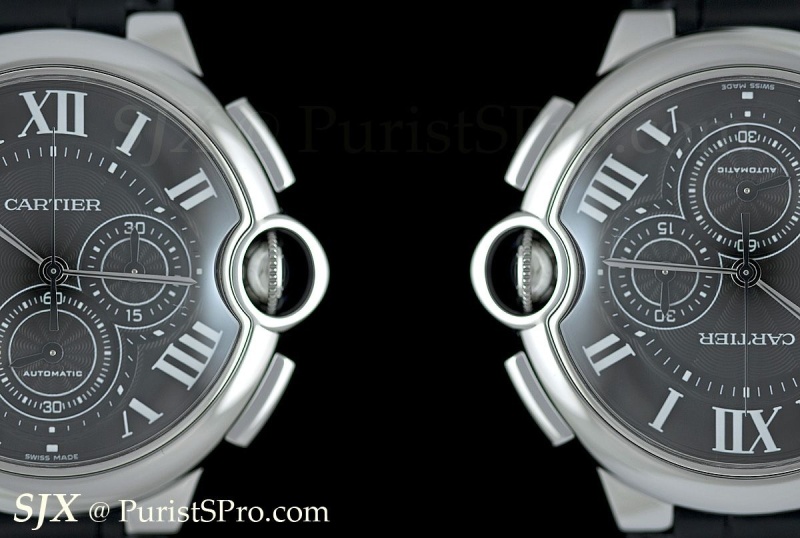 On the topic of the strap, and I diverge here for a bit; the grey dial Ballon Bleu chronograph could do with a more creative strap choice, perhaps grey or even black with grey stitching. Unfortunately Cartier is extremely conservative in its strap choices for men’s watches, taking an almost Henry Ford-esque “any colour so long as it’s black” approach. But Ford eventually went from the Model T to the GT40 so Cartier will get there, some day. 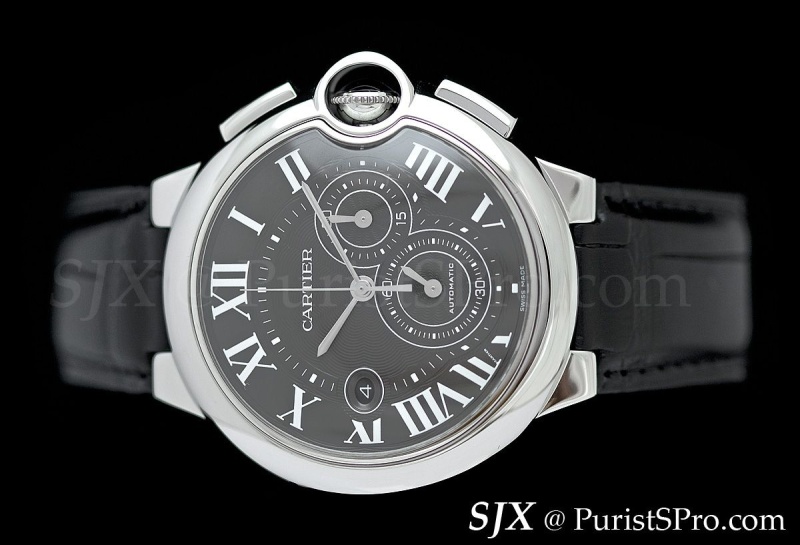 A closer look at the Ballon Bleu chronograph, including the new slate grey dial

By: SJX : May 1st, 2011-00:01
Launched in 2006, the Ballon Bleu has gone on to become Cartier’s best selling model line, with notable success in China. Most of the Ballon Bleu sold are the unexciting time-only versions with automatic or quartz movements; the Ballon Bleu chronograph, o...
login to reply

By: SJX : May 1st, 2011-05:40
Applied numerals are fairly rare for Cartier. The archetypal Cartier look is printed roman numerals since the brand started making watches. - SJX
login to reply

One of the few watches on which...

By: dxboon : May 1st, 2011-18:13
...I find the date window compelling and integral to the design. The oval date aperture balances out the void created by the crown protector. Also, unusual for me, I prefer the silver dial to the gray one. Usually I like gray better than any other dial co...
login to reply

By: GPRL : June 18th, 2011-11:24
Just saw the grey model in my local shopping centre this afternoon and it immediately got my attention. I agree with dxboon that the silver model is better than the grey model. Overall, it is a nice member of the Ballon Bleu family. Cheers
login to reply

How was the pusher feel?

By: GPRL : June 19th, 2011-02:54
I did not manage to as there were tons of people inside the shop because of the summer sale. I'll go back on a weekday when it is quieter. Does Carier do a ladies version? Cheers
login to reply

The chronograph only comes in one size. [nt]

Looking forward to your feedback!

By: GPRL : June 25th, 2011-15:27
Managed to try the watch yesterday. The pusher is quite smooth. I suppose this is what you would come to expect from a JLC movement. It fits pretty well on my small wrist too. To me, it is a nice everyday watch. Cheers.
login to reply