The Evolution of the Freccione 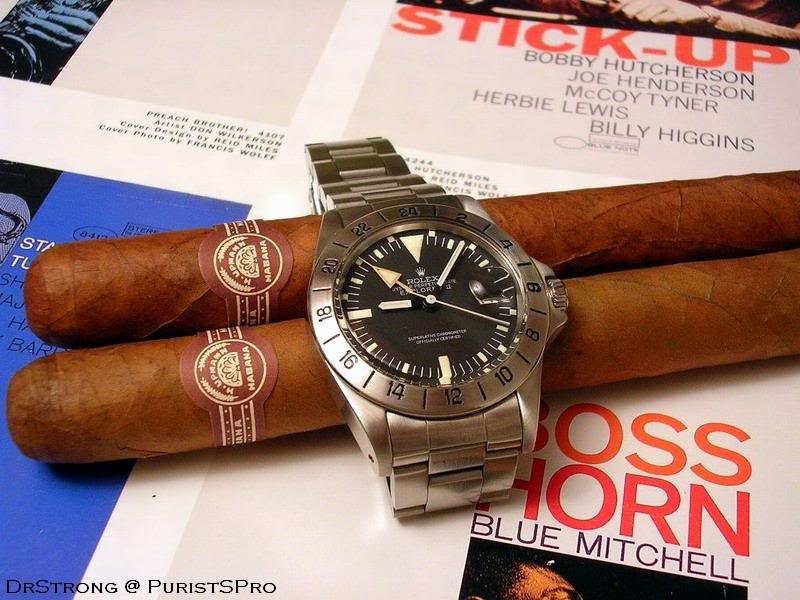 Our dear Amanico has already made a great in depth review of the Freccione a couple of months ago:

but I wanted to add a few personal comments as well as pictures of this watch and its evolution during its production period.

The Rolex Explorer II ref. 1655 has been produced from 1971 to 1984. Compared to the already existing Explorer I, the watch has been upgraded with the date feature and a 24 hours indication using an additional orange hand and an external graduated bezel. The movement used in this watch is cal. 1575.

From 1971 to 1974, the watch was fitted with a straight sweep second hand (without a tritium dot) and a case with almost “pointed” crown guards; the crown guards were not as small as on the first Submariner or GMT-master, but they were definitely smaller than on the other Rolex sports models of 1971 and than on the later case version of ref. 1655. The bezel used thick font with the numbers close to the dial ("thick font top").

Here’s an early example of a Freccione, where you notice the specific “swiss” dial, the straight second hand and the first type of bezel: 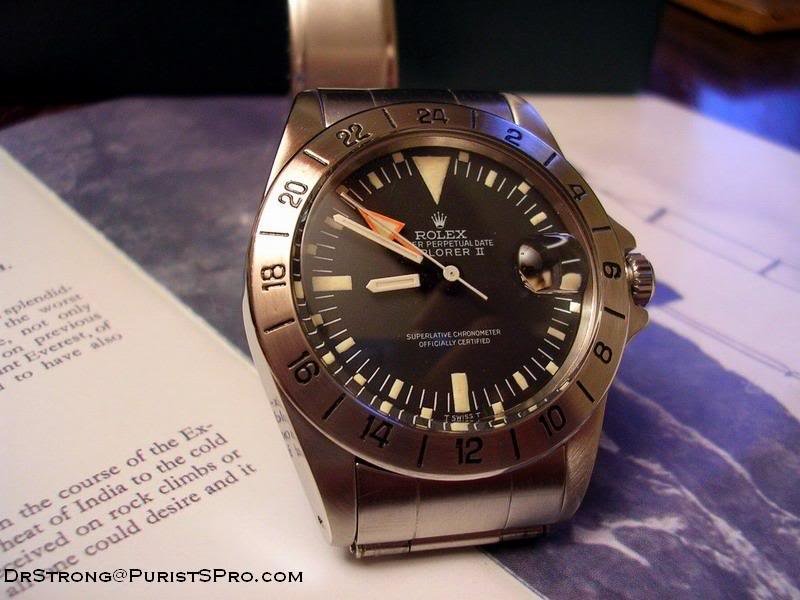 here’s a view where you notice the specific shape of the early crown guards: 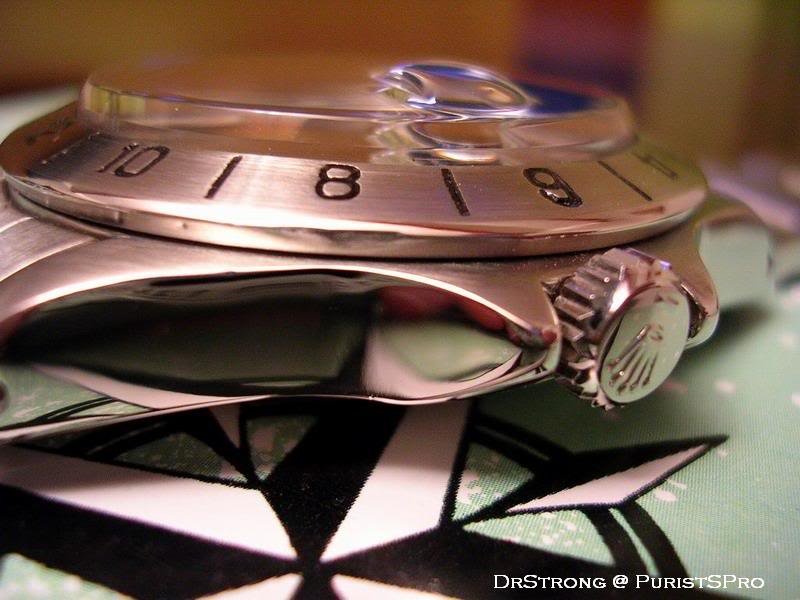 and a different angle to appreciate the various aspects of the watch: 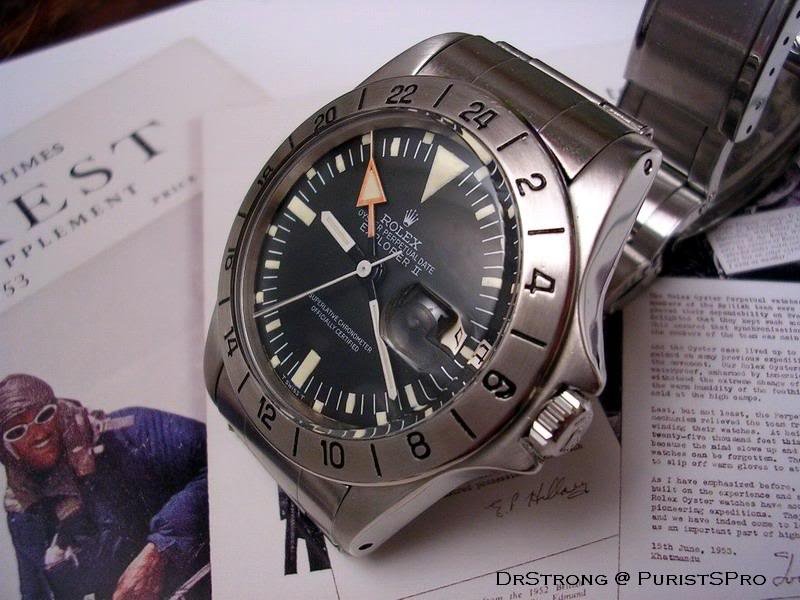 In 1974, the design of the watch is slightly modified: the crown guards get bigger and a new type of dial (rail dial) is fitted to the watch.

Between 1977 and 1978, the dial is changed again, especially the shape of the coronet and the bottom of the dial which now reads  t swiss < 25 t. 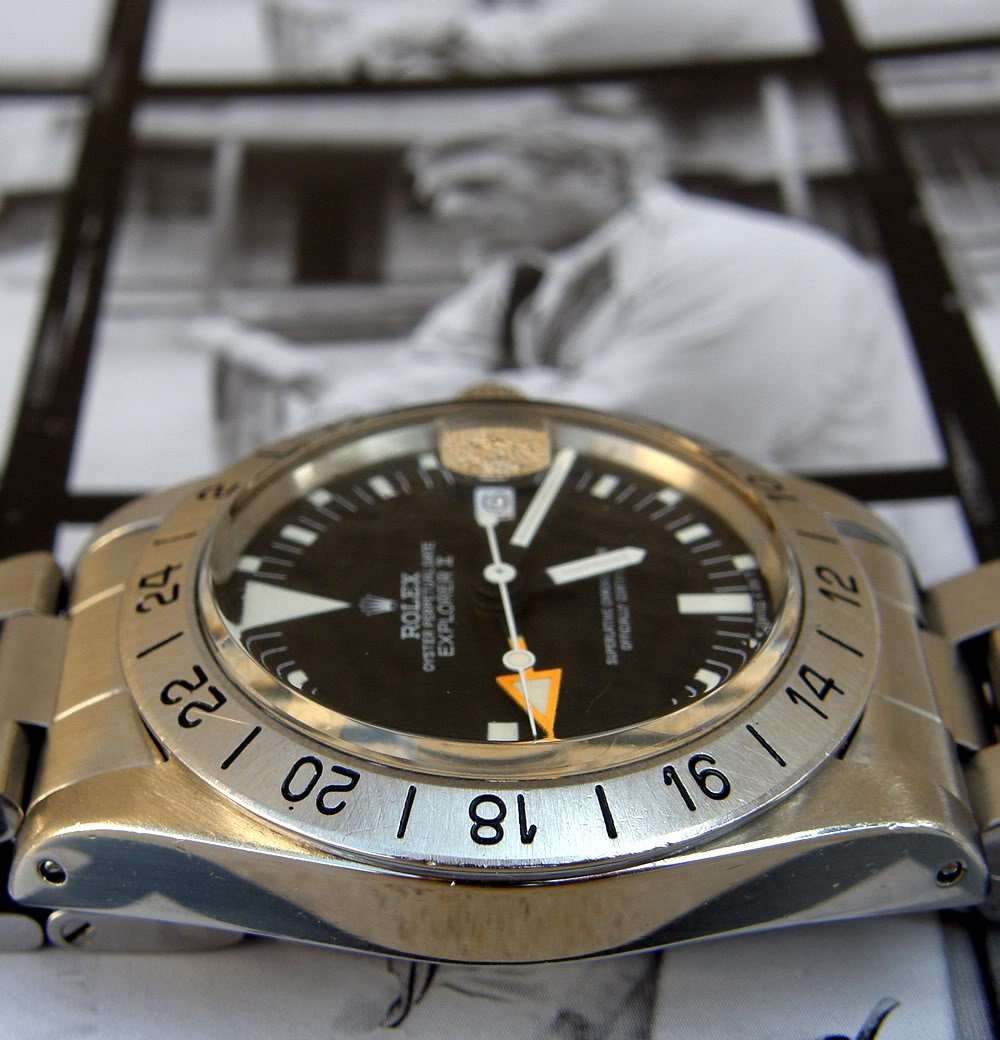 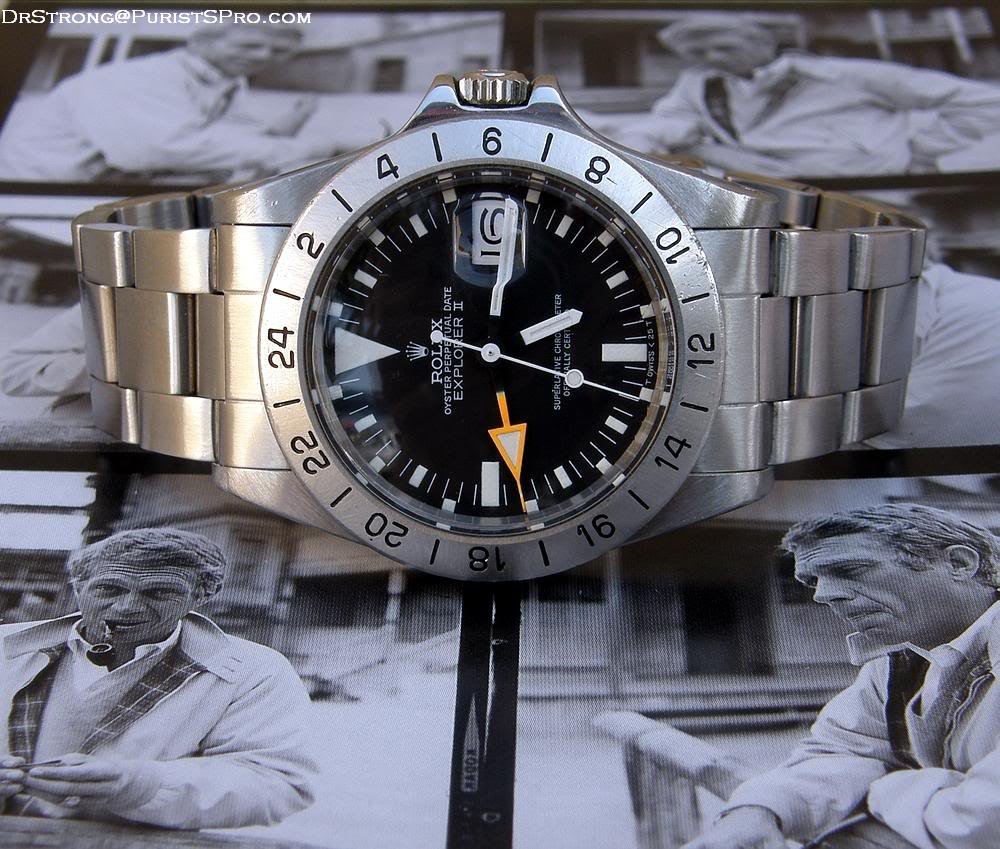 it is obvious on this picture that the crown guards are much thicker than on the early 1970’s watch: 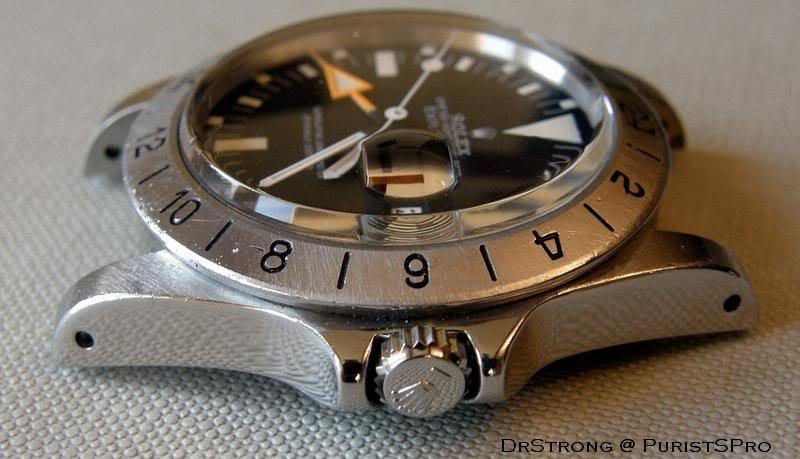 Here’s a detailed chronological list of the dial versions that has been established by Carlo Pergola and Antonello Niceta:

And a picture by these authors to illustrate the differences between the dials: 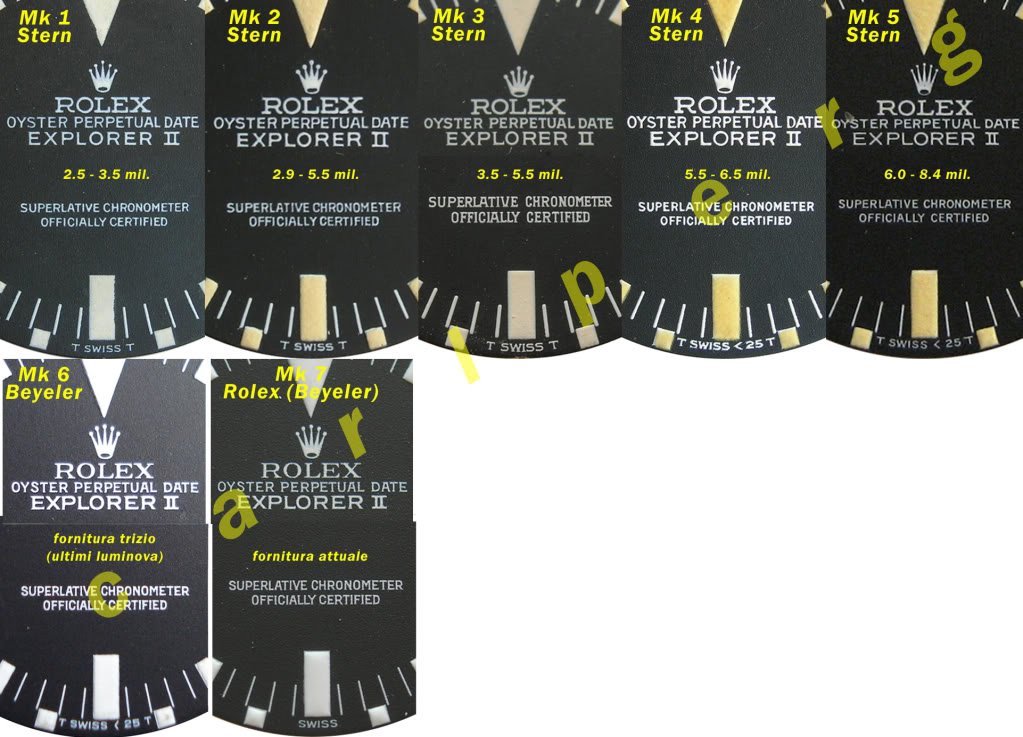 Here’s a summary of the evolution of the bezel:

To conclude, here are the mandatory vintage ads featuring the Explorer II, that illustrate so well the philosophy of the watch: 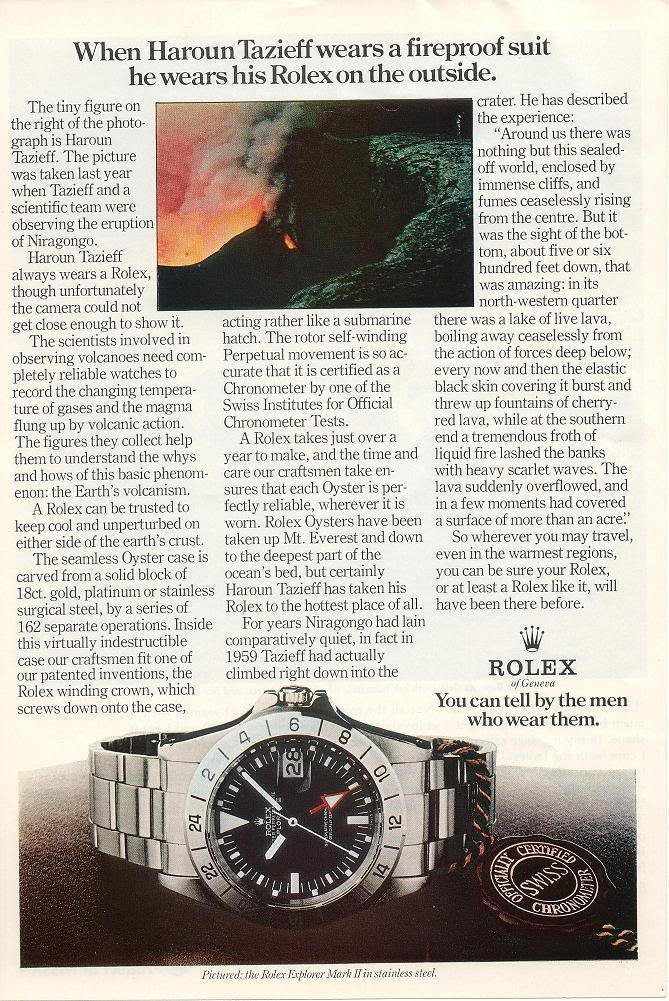 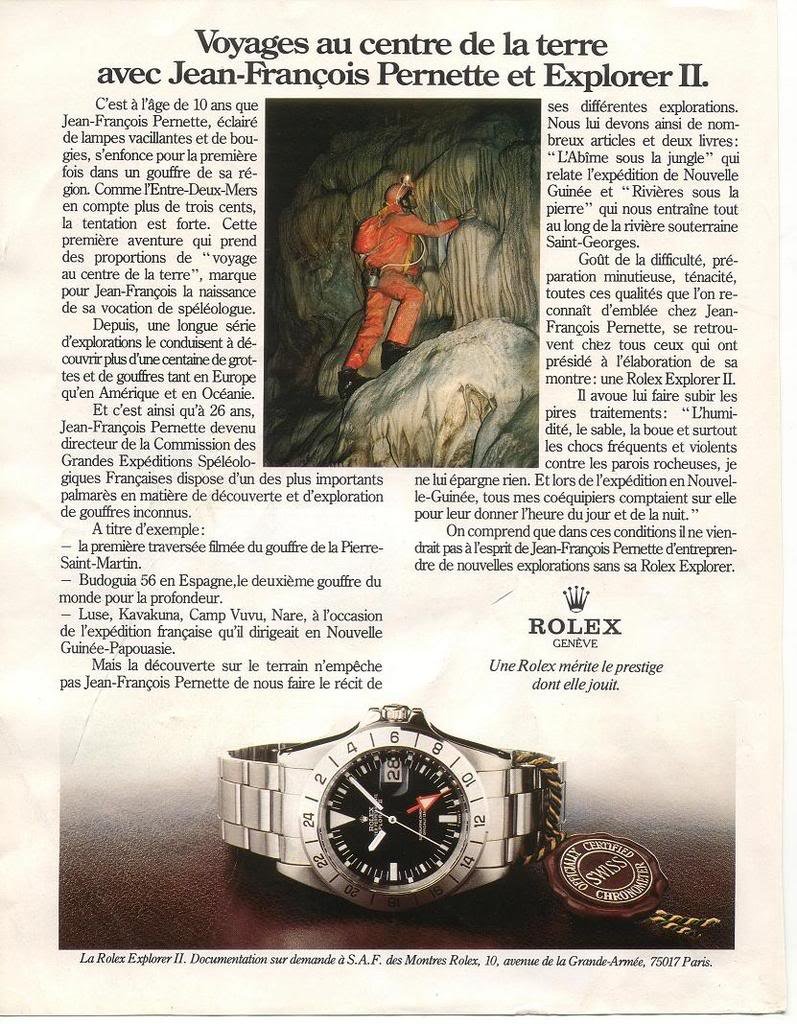 The Evolution of the Freccione

By: DrStrong : December 31st, 2009-01:26
Our dear Amanico has already made a great in depth review of the Freccione a couple of months ago: but I wanted to add a few personal comments as well as pictures of this watch and its evolution during its production period. The Rolex Explorer II ref. 16...
login to reply

Thanks and best to you too my friend ! [nt]

By: amanico : December 31st, 2009-03:30
It is great to see how the writings, the bezels, and the hands changed... Another interesting point is to see how the patina on the tritium indexes changed. On some generations, it is darker than on others, even older. I'm very happy with my 1655, even if...
login to reply

A pity you sold it.

By: amanico : January 1st, 2010-14:05
It is such a Beauty! The straight second hand is something, and the patina was so captivating. Best, my friend. Nicolas
login to reply

Traded years ago for a Breguet Aéronautique Navale... [nt]

One more Freccione on the forum. Cool ! [nt]

The watch is cool and the forum too

By: Democritus : January 1st, 2010-16:22
Thanks. Really love it and had to buy it when I spotted it, especially when it was born in the same year as me. Maybe some day, I will be able to source one with all the original dial/hands/bezel. For now, this piece is good enough. Thanks for the great w...
login to reply

Thanks a lot Hans [nt]

Wow, Steven, when you do things,

By: amanico : January 1st, 2010-03:41
You do them perfectly! What an awesome example! One of your latest catches? Best, my friend. Nicolas
login to reply

By: Ryan5446 : January 1st, 2010-06:56
I already had it for a longer time. The condition was very very bad. Unpolished but it looked as if a dog chewed on it for a couple of years. After a long and full SPA treatment, it is in reasonable condition. Completely original. I m happy with it. (dont...
login to reply

Good to see you're still alive ;-)

By: darma : January 1st, 2010-15:07
i learn to appreciate and understand this watch even more.. Great article with plenty of the right sort of information. many thanks darren
login to reply

By: Starman : January 1st, 2010-15:56
Thanks a lot for this piece of history and the great pictures. Fantastic watch this Freccione. I've settled for a new Explo II, but those early birds are really to die for. Maybe one lucky day I can get myself a 1971 Freccione (my year of birth you see). ...
login to reply

My first Explorer II was made in 1971

By: DrStrong : January 3rd, 2010-03:12
those are interesting watches, with the straight sweep second hand. Good hunting ! Jeff
login to reply

Popularity of the Freccione

By: dxboon : January 6th, 2010-00:55
I wonder why this particular series is so coveted? It's ruggedly handsome for sure. Is it the boldness of its oversized GMT hand? I love how large and orange it is. Thanks for tracking the evolution of the Freccione for us. I learned a lot from your artic...
login to reply

By: karsten : May 4th, 2019-05:55
If you take a close look at the crownguards of the straight second hand models in the Rolex adverts, you'll notice that they have the regular ones of the later models. So those odd pointed ones are either fame, overpolished or very very limited and specia...
login to reply

By: renerod : May 6th, 2019-14:14
Thanks for sharing so much valuable info about this great reference. Best. René
login to reply