Of course, there are differences compared to the vintage models, but . . .

. . . for the most part, it's a faithful rendition of the original, with nary a rough edge anywhere. The major differences outside of the entirely new caliber center on the location of the date aperture and the revised crown guard. I've never had a vintage model on my wrist before, so I wasn't prepared for the effect . . . 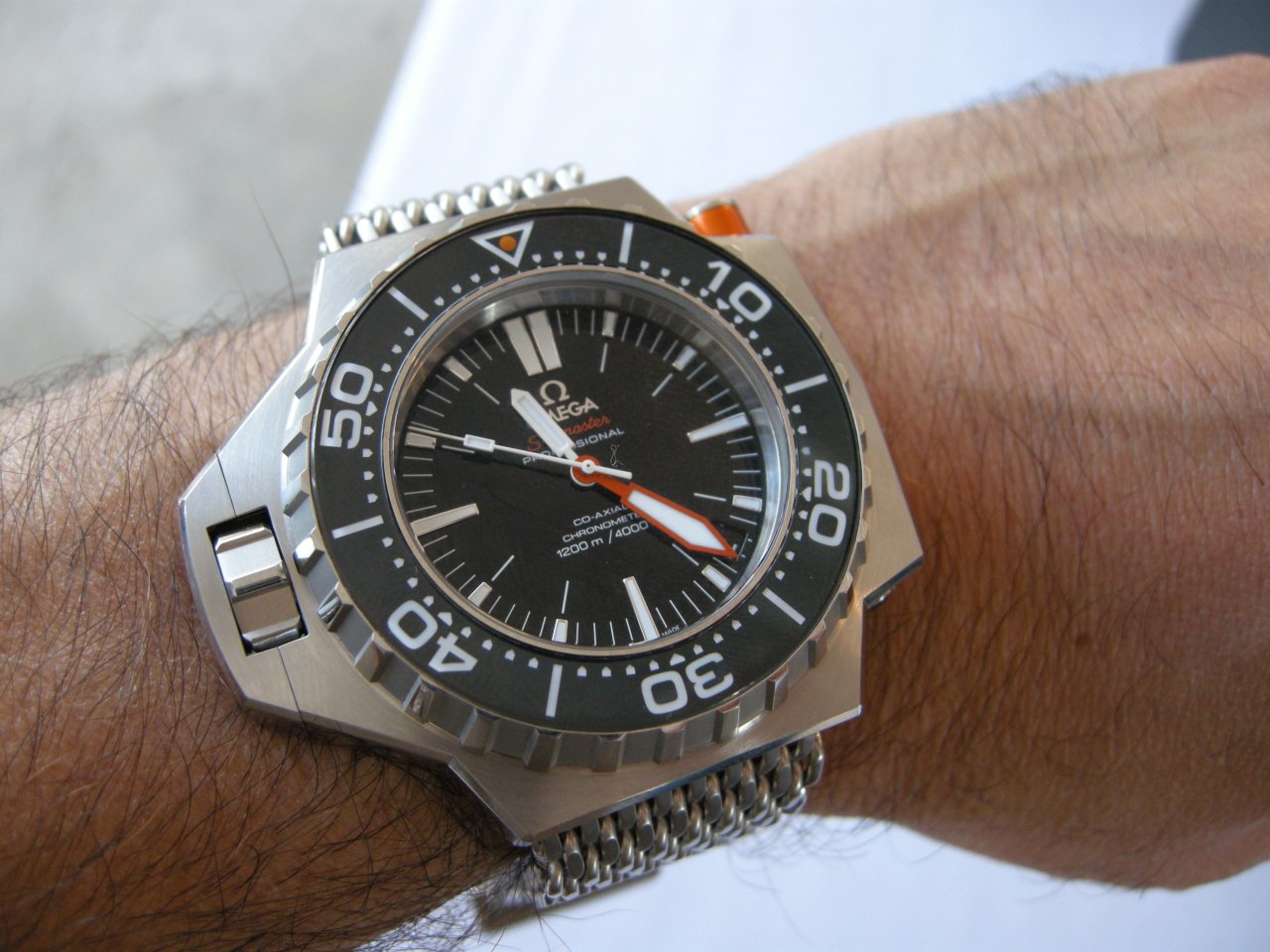 . . . that was as close to an epiphany as I've ever experienced. It should come as no surprise that my preferences run towards modesty in sizing and proportionality, and there are only a few modern large watches that I find aesthetically comfortable enough to consider owning, the current G O Senator Navigator and the GG Gefica being the two that first come to mind. The G O utilizes deflective design treatments to minimize the nominal apparent bulk of it's case, while the GG works due to a combination of it's unique case material and slightly domed appearance in conjunction with the arced displays of time and date that blend in with the overall design. The Ploprof is an entirely different kind of construction, and works well with a smaller wrist for similarly different reasons. Just as a symmetrical rectangular form complements a smaller wrist due to the subliminal effect of having apparent boundaries when compared to a round case, the asymmetrical case of the Ploprof further adds to the effect. The bezel on the Ploprof compounds the effect by it's almost turret-like appearance, which makes it appear as though the watch is mounted on a foundation; even though it took up a great deal of space on my wrist, I didn't feel as though I was wearing an overly large watch. Very, very cool . . . cordially, Art This message has been edited by Dr No on 2009-05-25 21:24:00

DRMW and Dr No touched bases with the good folks from Omega . . .

By: Dr No : May 24th, 2009-15:58
. . . last week during Swatch Group's "Basel in Los Angeles" presentation at the Raffles L'Ermitage Hotel in Beverly Hills. Greg Swift, President of Omega U S, was on hand to present the latest from Bienne along with members of his East Coast staff and We...
login to reply

The De Ville Hour Vision and Constellation chronograph on a rubber strap . . .

I really do love the Hour Vision...

By: Brava : May 30th, 2009-08:06
And it might very well be my next purchase... Here are a few pics I shot at the Omega Boutique in Interlaken, CH. At this time the HV was only available at Boutiques, so soon after introduction....
login to reply

A bevy of Speedmasters were on display, starting with three Professionals . . .

Lest the ladies feel left out, let's oblige with a pair of chronographs . . .

By: mrsnak : May 24th, 2009-18:34
Even because I know there's a market for these,and even getting close my my feminine side (and having a reasonable take on the youth bling market), I can't get behind these.
login to reply

Well, since both mrsnak and Nicolas have underlined . . .

By: Dr No : May 24th, 2009-22:36
. . . their reservations regarding the previously released ladies models, let's see how they feel about the latest offerings, starting with the Constellations: I rather like this demure model . . . not overly feminine, and appropriately sized for a woman'...
login to reply

Heeeeerm, Art, no pics of the tourbillon central? :)))

Sorry, Nicolas, I didn't ask specifically, but Greg gave us . . .

Ah, thanks for sharing a wrist shot of my candidate . . .

We're not done yet with ladies models, gentlemen . . .

Let's move from the distaff side of the coin . . .

The same chronograph movement carries over to the De Ville line . . .

By: Dr No : May 24th, 2009-23:45
. . . with this basalt dial model . . . . . . that I liked enough to try on my wrist: Slightly large, but the matte basalt and black dial combined with a mostly brushed finish and pleasing proportions make this one to consider for those of us who are wris...
login to reply

The De Ville Rattrapante is offered in a similar version . . .

By: Dr No : May 24th, 2009-23:55
. . . with a canted rehaut. A dateless version would be interesting, too, and more in keeping with the focus on precision time measurement inherent in the split seconds complication....
login to reply

The De Ville Chronoscope GMT was on Greg's wrist . . .

Another model in the Specialties Olympic Collection . . .

DRMW brought along his SLR with dedicated macro lens . . .

By: Dr No : May 25th, 2009-11:28
. . . so I hope he'll be posting a photo or two of the limited edition Speedmaster 40th Anniversary model celebrating mankind's greatest accomplishment . . . . . . because my efforts at capturing this model turned out poorly. The highlight of the Speedmas...
login to reply

By: Mostel : May 25th, 2009-12:10
Thanks for these pictures and wonderful post.... Whenever I see new Omegas I just shake my head... where is the bloodline? Outside of the infinitely reinvented Speedy... those busy bizarro dialed chronographs are quite unattractive, no? I do like the annu...
login to reply

By: DeGeus : May 25th, 2009-13:11
and wholeheartedly agreed. In times of stiff competition the marketing department probably operates under the credo "not having a shot is always a miss". Stylewise however, there is hardly any news under the sun - just variations. Actually prefer an origi...
login to reply

By: Dr No : May 25th, 2009-14:05
. . . being a devotee of Omega since it's inception, my feeling is that the development of Omega's aesthetics has followed a linear path and that today's models are lineal descendants of their forbearers. In a purely abstract sense, one could make the arg...
login to reply

How difficult is it for OMEGA?

The problem as I see is

By: mrsnak : May 26th, 2009-08:12
that many of the new Omegas seem to designed by committee. Trying too hard to include something for everyone - in the same watch.
login to reply

They too, have been infected by...

By: BDLJ : May 26th, 2009-18:56
...the elongated date window showing 3 or 4 dates at once. The ugliest and most head-cockingly strange affection on a dial. Speedmasters on Crocodile...hmm.
login to reply

Quite a collection you have provided, Art....

By: tempusfugit : May 25th, 2009-12:25
Of course, the large (45 mm) case size is too much for me. Actually, I was intrigued by the "ladies" Planet Ocean which is available in a size I consider reasonable (is it 37.5 mm?). Is it available in titanium or another metal besides steel? Although man...
login to reply

i have to agree with Mostel. i love Omegas, but there is nothing new coming out.

By: G99 : May 25th, 2009-13:16
all the speedmasters are what they are, the Aqua Terra's and Planet Ocean's are renditions of the old SM300 if you look at the case shaping. the Central Tourbillon is stunning and the 8500 range is interesting especially the Annual calendar that you cant ...
login to reply

And sadly, aside from the Ploprof, I feel the same way

Sorry, JB, but the ladies Planet Ocean chrono is only available in steel . . .

By: Dr No : May 25th, 2009-14:26
. . . although another recent personal favorite, the titanium Constellation Mission Hills limited edition chrono, is still available in both men's (41 mm) and women's (35 mm) sizes. The men's model has sculpted lines reminiscent of the Mk II Speedmaster, ...
login to reply

Is is possible to get a side to side pic of the Vintage and the re edition, Art ?

Our moderator Bill Sohne has a vintage Ploprof . . .

Thanks, Art. Very curious to see the outcome.

By: BDLJ : May 26th, 2009-05:22
Hi Nicolas. The watch seems quite faithful, from the pictures at least. A few of things bother me with the new one, however. Firstly, a minor point, I prefer the date window on the vintage piece. Secondly, the bezel button looks too blingy to me, but depe...
login to reply

if this one fits of my wrist...

Of course, there are differences compared to the vintage models, but . . .

By: Dr No : May 25th, 2009-16:06
. . . for the most part, it's a faithful rendition of the original, with nary a rough edge anywhere. The major differences outside of the entirely new caliber center on the location of the date aperture and the revised crown guard. I've never had a vintag...
login to reply

By: AAP : May 26th, 2009-07:58
It seems that your impressions of the way the new PloProf sits/feels on the wrist echo those who've owned the original. It looks like such a hulking beast, but from everything I've heard, the dimensions belie the true wrist feel. Great shots, by the way!
login to reply

By: Dr No : May 26th, 2009-08:32
. . . and thanks for the complimentary remarks - the funny thing is, the Omega and G O booths were situated right next to Breguet, Blancpain, and Jaquet•Droz, but the lighting wasn't nearly as good in their locations. I couldn't get off a decent single sh...
login to reply

By: AAP : May 26th, 2009-08:45
Thank you for the welcome. I've been a "lurker" for about two years. You just coaxed me out of the shadows with this thread. Very impressive for a point-and-shoot. They are slaves to decent lighting, so it seems you lucked out (or should I say "we" lucked...
login to reply

It appears from Art's photos... Omega did indeed capture the Spirit...

Thank you for posting, Art

By: AlexSunrise : May 26th, 2009-18:23
The Ploprof is indeed one very appealing watch, and man, does it look cool on your wrist! Looking forward on seeing it land at my AD. Best regards, Alex
login to reply

Thanks for coverage Art & MW!

By: Dr No : May 31st, 2009-13:10
. . . than bringing the pleasure of Omega's latest offerings to the forum, and getting to hang out with my colleagues at the same time. ED209 joined us for drinks and appetizers afterwards at a nearby café, but he couldn't get off work that day :-( ....
login to reply