The "redesign" of Jaquet Droz continues.

Presenting another beautiful/romantic interpretation of the moonphase 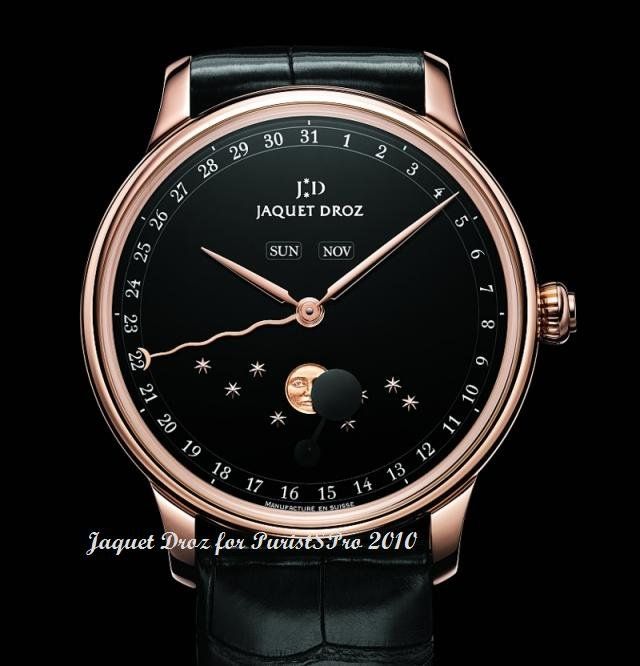 It is the light that catches every eye, the heavenly body that fires poetic dreams in the dark of night. The magic of the Moon inhabits one of the legendary Jaquet Droz models that the Manufacture has just reinvented. The Eclipse is a real feat of watchmaking; it not only displays the day, month and year, but also the phases of the Moon which have fascinated astronomers, explorers and artists of all times and every culture. On the dial, a Moon with a smiling face inspired by 19th century engravings playfully appears and disappears behind a matt black disk that sharply offsets the brilliance of the dial. Evolving day after day, subtly changing with each new dawn, the Moon in all its forms watches over this exceptional timepiece.

This mechanical performance, together with the genuine visual spectacle, has been achieved with great aesthetic purity. Within the 43 mm red-gold case, an intensely black Grand Feu enameled dial welcomes 8 stars, inspired as much by the favorite number of the Manufacture as by the symbolism of the star that is so dear to Jaquet Droz

By: mkt33 : March 23rd, 2010-07:46
The "redesign" of Jaquet Droz continues. Presenting another beautiful/romantic interpretation of the moonphase The press release: It is the light that catches every eye, the heavenly body that fires poetic dreams in the dark of night. The magic of the Moo...
login to reply

No. Here are the technicals

By: Jester : March 26th, 2010-07:58
that black enamel dial looks perfect against the rose gold case and I cannot believe how much better it looks compared to the old Les Lunes... I would imagine it would be priced at the same price point as the Les Lunes? Would this be of the regular produc...
login to reply