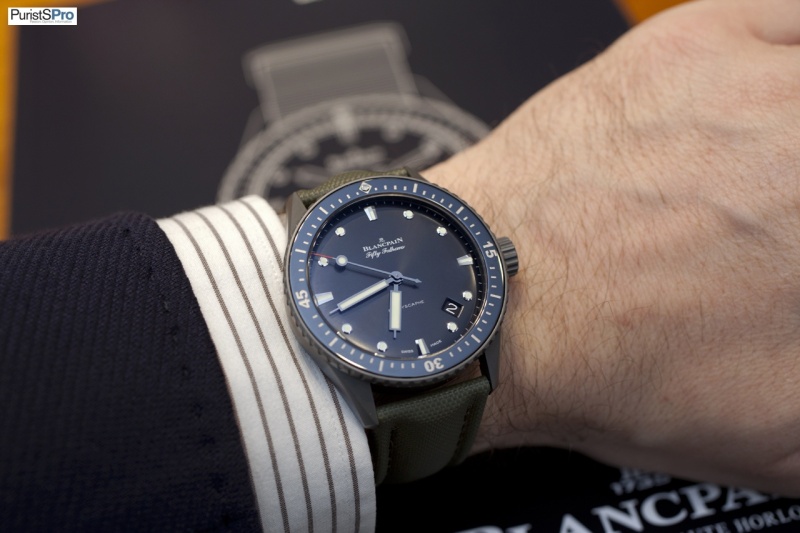 One out of three versions offered for the 60th anniversary of the Fifty Fathoms is the one above in ceramised titanium. But before we look to the novelties we should have a quick look back. 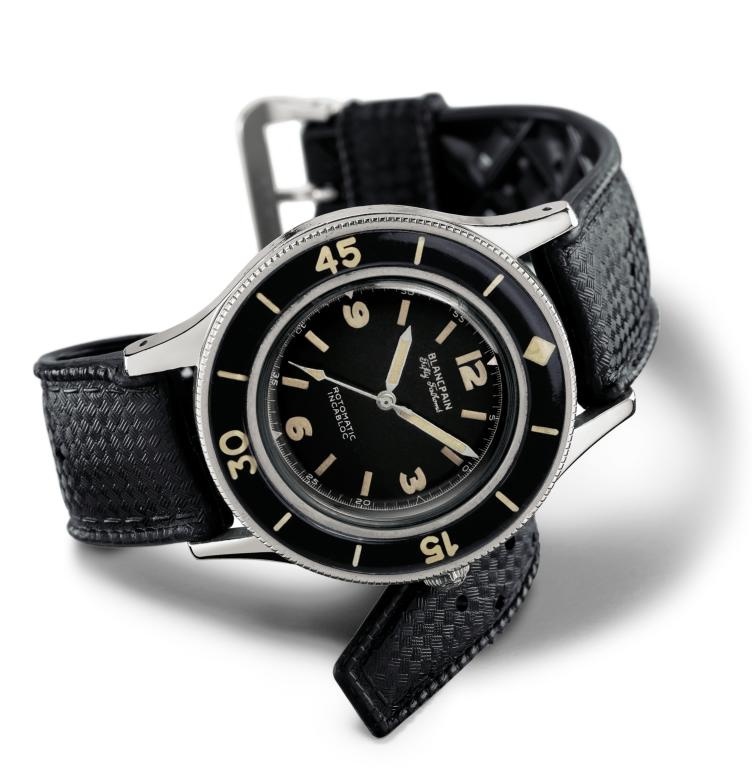 It is truly amazing to note that the entire set of characteristics established by Blancpain in 1953 is virtually identical to the NIHS 92-11 (ISO 6425) norm introduced for diver’s watches in 1996, almost 40 years later:

- SAFETY: a lockable bezel bearing markings in order to check the dive time and the remaining air reserve: first patent for the FIFTY FATHOMS.

- RELIABILITY: substantial water resistance to almost 100 meters. In order to enhance the water tightness of the case, Blancpain developed a double O-ring seal on the crown: a second Blancpain patent for its diver’s watch.

- STURDINESS: automatic winding to reduce the number of times the crown would need to be unscrewed and thus in turn reduce the significant risk of wear on the crown’s water-resistance system.

- ANTI-MAGNETISM: an indispensable form of protection for a diver’s watch.

Since its creation, this fascinating diver’s model has been interpreted in countless different ways – not only in the past: with or without a date, featuring variously shaped hands, different bezels and dials, as well as in a range of case surface treatments. Also we have seen different members in the Fifty Fathoms family and the most important ones are: Fifty Fathoms, Aqua Lung and Bathyscaphe.

The latter – two examples from the past : 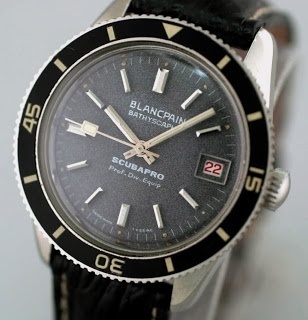 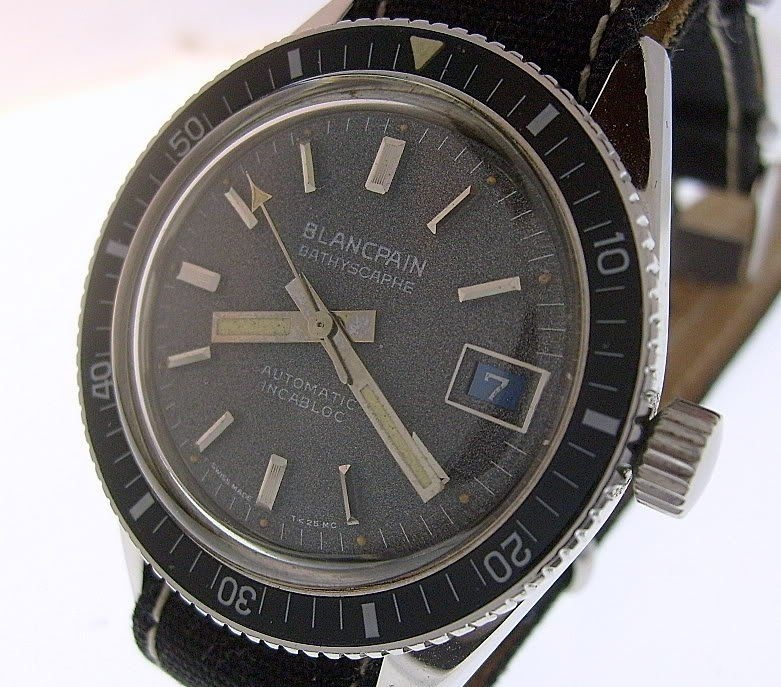 2007 - Blancpain introduced THE modern Fifty Fathoms, which is probably the best selling watch in their recent collection. 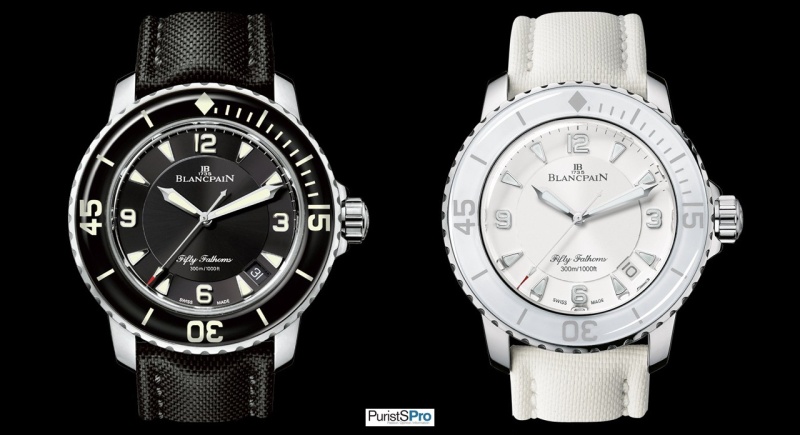 The movement inside is the Caliber 1315, known for its outstanding robustness and reliability.

“If somebody asked me what I think is missing in the Fifty Fathoms family:

Well, I could imagine a FF Bathyscaphe with a “simpler” caliber 1315, case diameter 42mm and a price tag about € 7K. From my point of view, those should sell very well. Some nice vintage Bathyscaphe designs have been done in the past and could be used for inspiration …”

"So what I would like to see is a 'budget' 50 Fathoms with a less elaborate bezel, a more basic case and less expensive finishing but built to withstand the elements as the current one - this does not really fit into Blancpain's haute horlogerie philosophie, doesn't it?

WAIT – there was once a watch called 'Bathyscaphe'...? We almost pray in unison: Hope, is there hope?”

By: small-luxury-world : May 17th, 2013-09:13
One out of three versions offered for the 60 th anniversary of the Fifty Fathoms is the one above in ceramised titanium . But before we look to the novelties we should have a quick look back. 1953  The Blancpain Fifty Fathoms the first modern divers wat...
login to reply

By: nilomis : May 17th, 2013-09:29
Landed on the absolute top of my dream list. I dare to say that Blancpain will move,thanks to this watch, to the position that it deserves. As a side benefit, it will educate the watch designers that most of the persons don't feel good with a 45+mm watch ...
login to reply

By: AlexSunrise : May 17th, 2013-14:33
You have showcased even the most minute details of the Bathyscaphe! Simply stunning! I can't wait to see one in the flesh! Thanks for sharing it with us, Alex
login to reply

Alex, thanks for your kind reply!

Vte, thanks and I could imagine ...

Interesting addition - looking forward to see it in metal

By: nitediver : May 18th, 2013-05:42
Wearing my FF when writing this comment. I am qurious how the Bathiscope compares to the FF 5015. And I am glad to hear that I soon can get a NATO strap that fits! Thanks for the report, Oliver Stefan
login to reply

That would look strange and I doubt it...

By: Ornatus-Mundi : May 20th, 2013-09:13
as the end pieces are individually designed for each case shape (i.e. case diameter and thickness) so a 'natural fit' is highly unlikely. In addition, the shape of the lugs are totally different between the two. Magnus
login to reply

This is a really nice minimalist

By: Aless156 : May 20th, 2013-12:37
interpretation of a dive watch. I think Blancpain did a really good job. I have to admit, until I saw this watch, none of the current FF's appealed to me and I could not see myself buying a modern FF. They all seem too far removed from the many lovely vin...
login to reply

I saw this watch for the first time recently...

By: patrick_y : March 3rd, 2014-14:14
I saw this watch for the first time recently at my local Blancpain dealer. And I really liked it! The design, the movement, even the movement finishing! This watch is great! And I'll take mine on the green nato strap thank you very much!
login to reply

By: Baron - Mr Red : May 17th, 2013-10:28
Nice way of introducing the modern versions. I love looking back at how watch references evolve. Great article. Here is my contribution to the historical evolution...fitting....I think....to post the 50th anniversary ...
login to reply

That one was a great one to celebrate an important anniversary.

By: small-luxury-world : May 18th, 2013-03:15
was addictive to me as well, but at the end I never got one. Why? First, I found the price (compared to the very similar FF Trilogy) quite prohibitive. Second, I got some very good offers, but the "simple/flat" dial couldn´t convince me at the end. Still ...
login to reply

The 60th is a nice watch

By: Baron - Mr Red : May 19th, 2013-02:33
If I looked at it in isolation, I would like it. I wouldn't buy it, but I would like it. However, having read what others have said in this thread, it strikes me that there is some common theme. Many people feel that Blancpain have missed a wonderful oppo...
login to reply

A nicely written article, Oliver. But I tend to disagree.

By: amanico : May 17th, 2013-14:41
1/ Because the original Batyscaphe is, in my opinion, not the most interesting piece in the Vintage world, the big cases being THE FF to go for. ( 41 mm ). 2/ Because, for the 60th birthday of the Fifty Fathoms, there were more interesting watches to go f...
login to reply

Nicolas, thanks for your reply and your thoughts.

By: small-luxury-world : May 18th, 2013-03:23
Infact we disagree, but that is ok for me. I guess when it comes to the theme Fifty Fathoms you have a kind of vintage paradigm in mind, which we don´t share. Best, Oliver
login to reply

Well, the Vintage FFs allow me to appreciate some modern FFs, such as

By: Marcus Hanke : June 4th, 2013-06:36
... I have to admit that I was everything but impressed by the Bathyscaphe. Its highlight is certainly the movement, but I would rather spend the money on a completely different watch or continue saving for the "big" FF. Marcus
login to reply

Thanks for the article Oliver.

By: foversta : May 17th, 2013-15:04
The article is much better than the watch actually. I found it a bit uninspired. It is not ugly, I can wear it without problem... but it is so-so which is sometimes worse. I wonder why. And I think it is because there is a slight unbalance on the design. ...
login to reply

FX, thanks for your reply and your thoughts ...

By: small-luxury-world : May 18th, 2013-03:31
even when we don´t share our view this time. For me the regular FF is a beauty and the new Bathyscaphe is (like) a tool. The latter explains the design to me and the outstanding movement is just the cream on top. Best, Oliver
login to reply

By: Briandumais : May 18th, 2013-06:16
I have been scratching my head wondering whey they picked this model for such an important anniversary. i have owned a few of the original models and i found them very boring. I would never consider this a dive watch for a re-issuie. With such small amoun...
login to reply