The 1000 feet Aqua Lung was the US version of the Fifty Fathoms and was only sold in the States. The 1000 feet was released later then the european Fifty Fathoms and was the very first watch with a guaranted waterresistance of 1000ft/300m. Even the later Milspec was only guaranteed to 600ft/200m. The earliest information about the release I have, is from a US Divers catalogue from 1958 showing exactly this Blancpain, but it is possible that it was already on the market earlier! 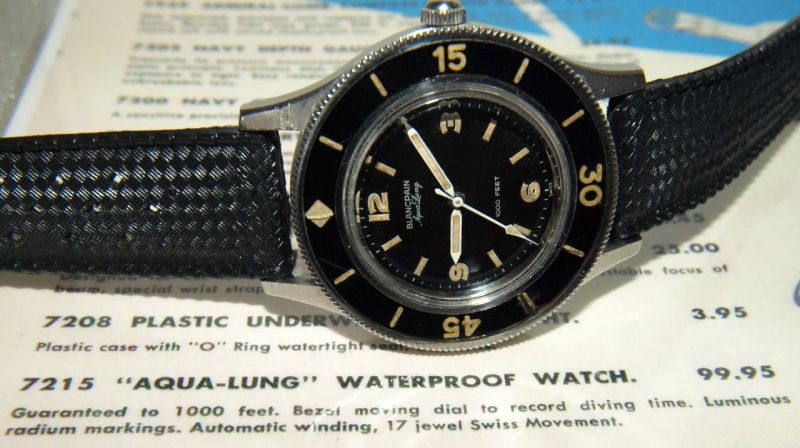 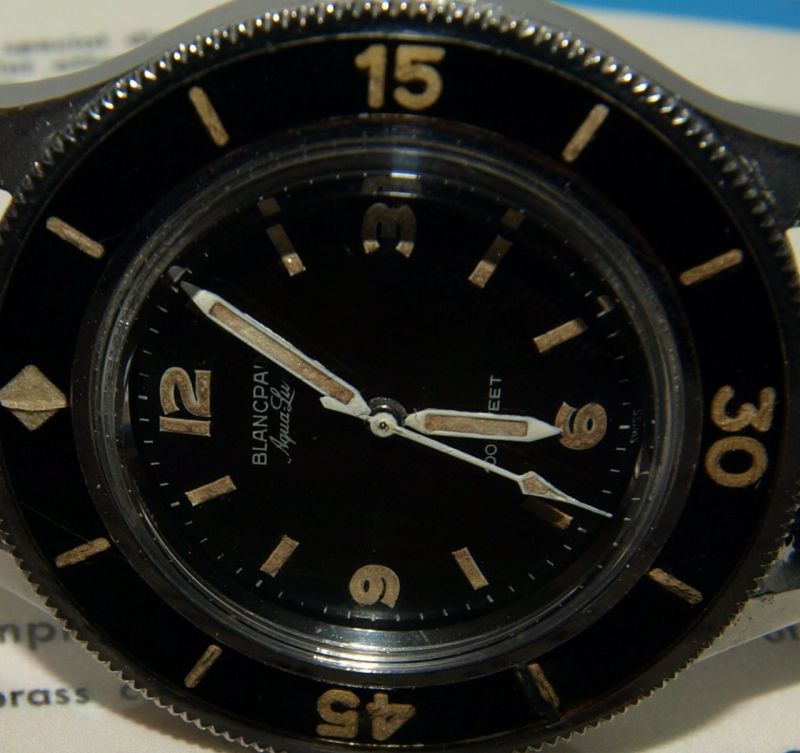 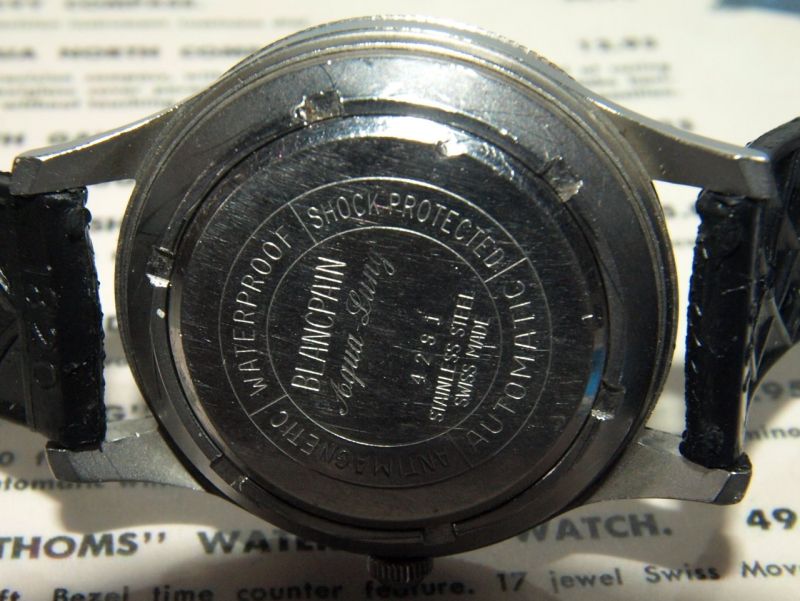 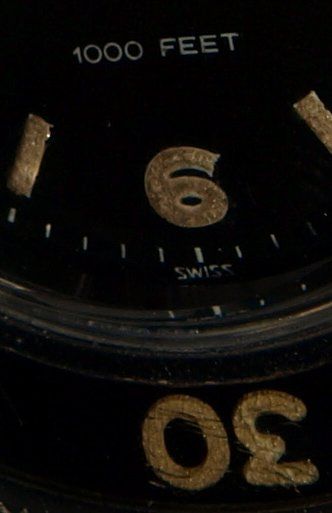 Lloyd Bridges, a famous US moviestar gained wide recognition as Mike Nelson, the main character in the very popular television series 'Sea Hunt', which run from 1958-1961. On the cover of the 1962 February issue from the "Skin Diver" magazine, Lloyd wore a Blancpain 1000ft. This was a tremendous boost for Blancpain and they earned a lot of reputation for their high quality dive watches afterwards. 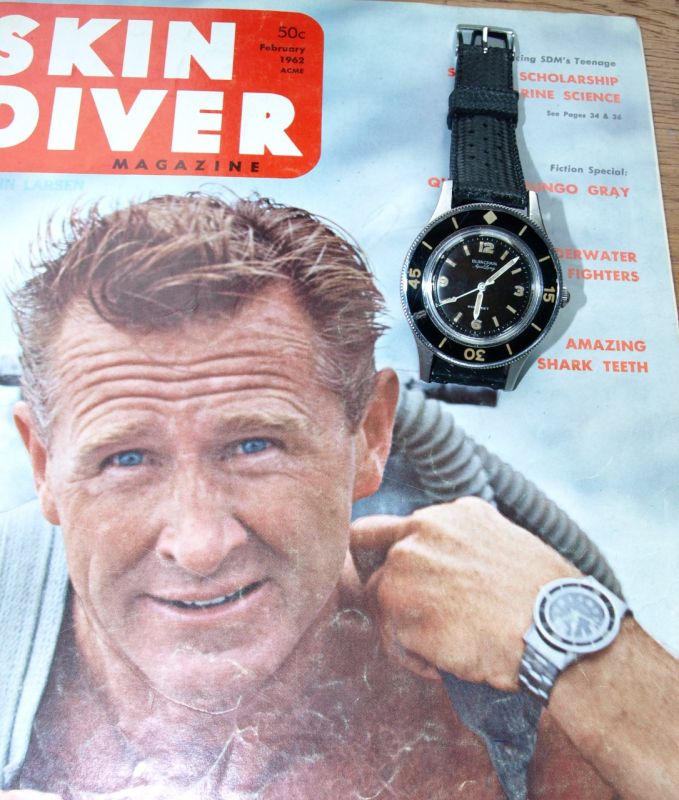 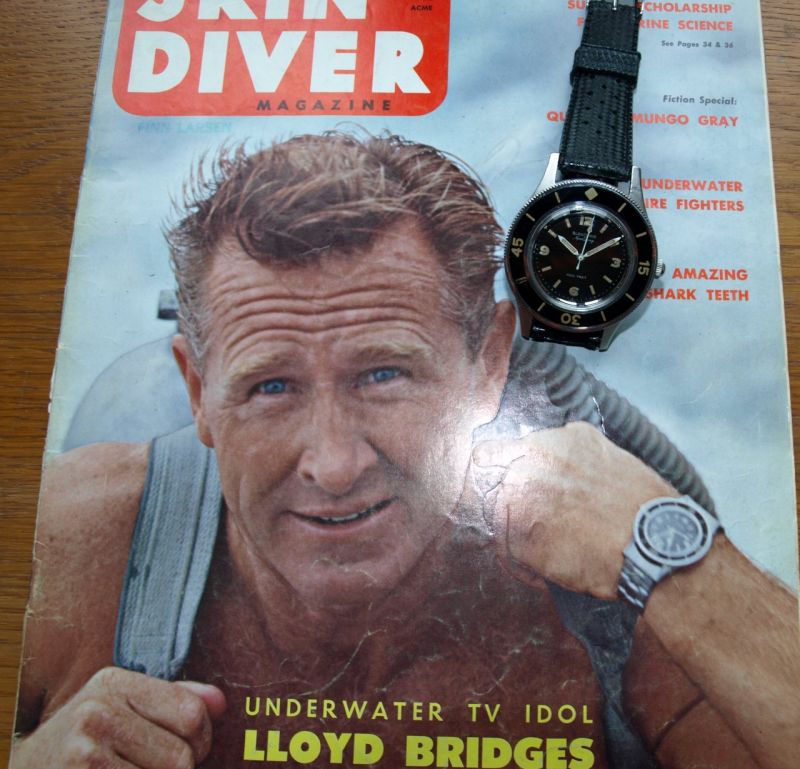 There existed another version of the 1000ft with an wider bezel and a 'wrong' dial, with name Agua Lung. 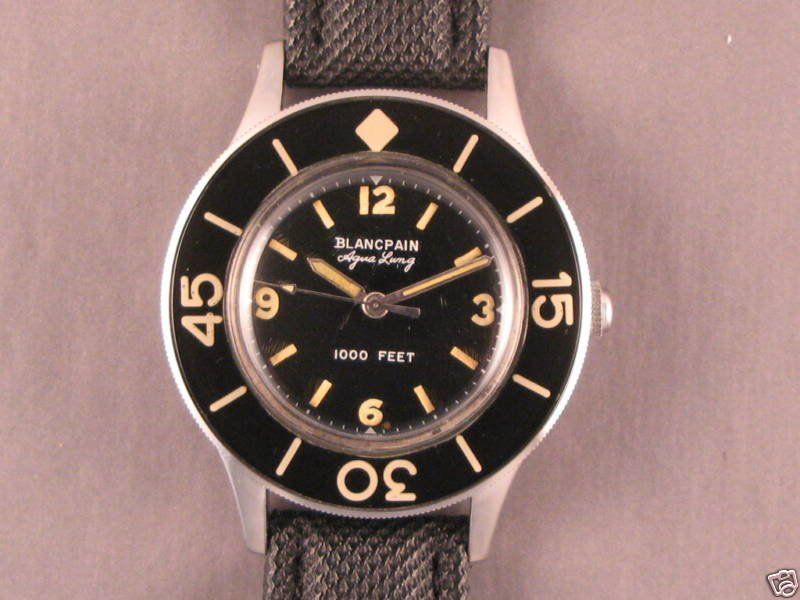 By: dxboon : January 31st, 2010-20:05
Yet another beauty from your collection! I really love these old Fifty Fathoms. They prove the case that one doesn't have to sacrifice beauty in favor of practicality. You can have both. Cheers, Daos
login to reply

By: claude.f : February 2nd, 2010-03:59
Because of such great collectors like you, I always find the motivation to go on with my researches about these amazing Fifty Fathoms!! Thank you so much for your nice words!! best Claude
login to reply

Thanks a lot Stefan! I always try to get the full package! ;-)

By: fifty fathoms : February 3rd, 2010-12:09
thank you again Claude, very interesting report. The watch on the magazine has a different bezel than yours. The outer metal ring seems much wider than yours and the bakelite inlay seems to be smaller, like on a military version ???? regards Stephan
login to reply

By: claude.f : February 3rd, 2010-17:00
I don't think so that it is a different bezel. It's not a studio photograph and you can see that the watch is strongly lighted by the sun. I think these are only reflections from the steel borders of the bezel. Also the whole watch and the bezel looks not...
login to reply

By: fifty fathoms : February 3rd, 2010-22:44
Hallo Claude your explanations about reflections and so on make sens ! Thank you for comment. best regards Stephan
login to reply

By: claude.f : February 4th, 2010-01:10
Remember also that in the early 60's the printing quality wasn't on the same high standard then today, and it's only a reproduction of the original ! You can see very well a wide white border! best my friend --Claude...
login to reply

By: fifty fathoms : February 5th, 2010-05:13
... some may think so, some may think so..... hard to say, I think the outer rand is a little bit wider. I think to the different types from Bill Yao with his stingrays. The 50th the 60th and the 70th are different best regards Stephan
login to reply

I have this same watch

By: tressa : December 1st, 2010-05:15
It's been sitting in a box for many years although it is not in as good condition as the one you have pictured. I am interested in selling it and hoped you could give me an idea on where to start.
login to reply

By: bethannaguilar : February 20th, 2010-12:11
Hi I came across your forum when researching the very same watch but could not find very much information via web. I have this very same watch but missing the band, in working condition I was interested in selling could you lead me in the right direction ...
login to reply

So, put a FS post on our Collectors Market.

By: amanico : February 20th, 2010-12:16
As for the price, sorry but as per forum rules, we don't give estimations, here. But I guess that if you want to sell it, you already have an idea about the price you want to ask? Best, Nicolas
login to reply