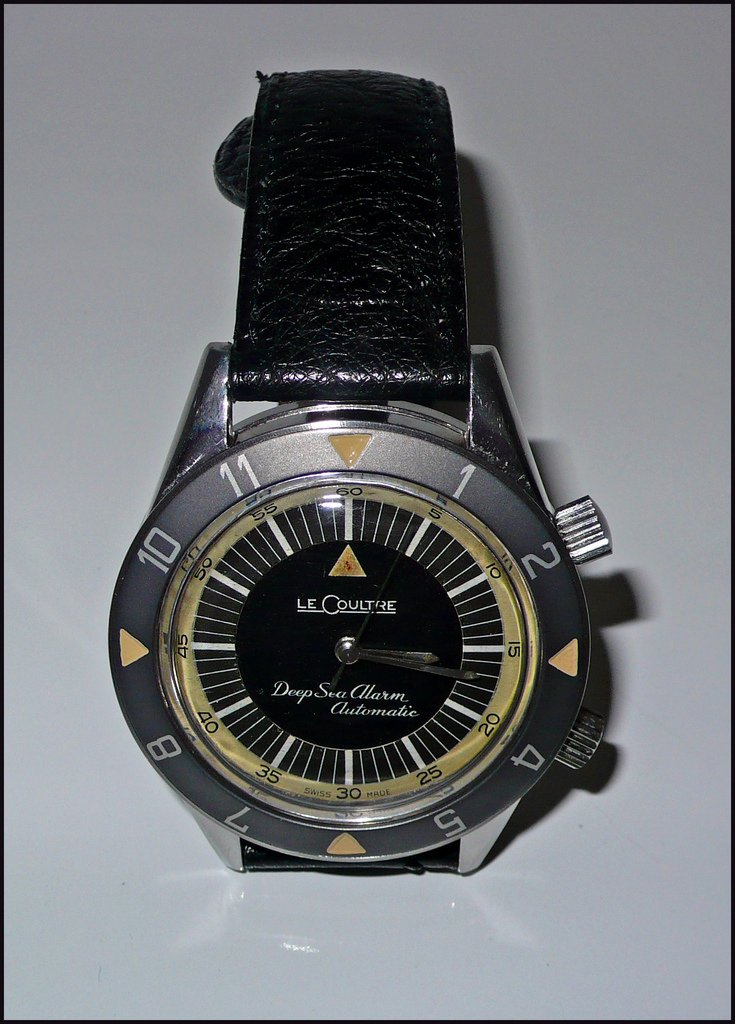 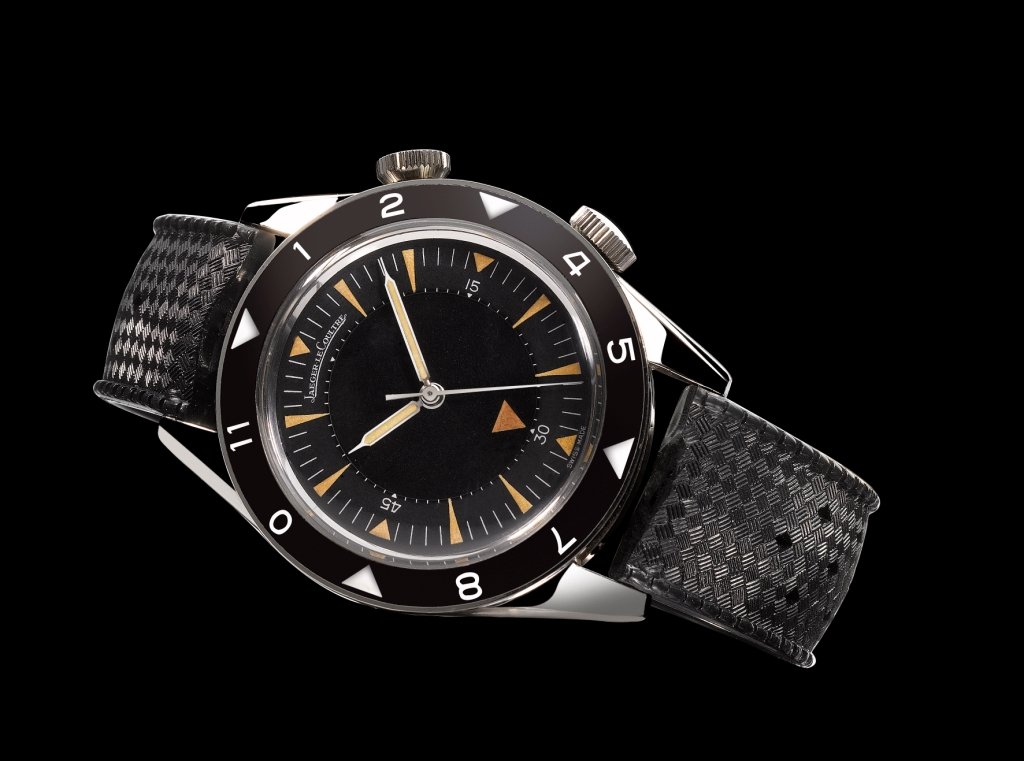 And there, the American Version, the big difference being the dial, with a special writing, and the indexes: 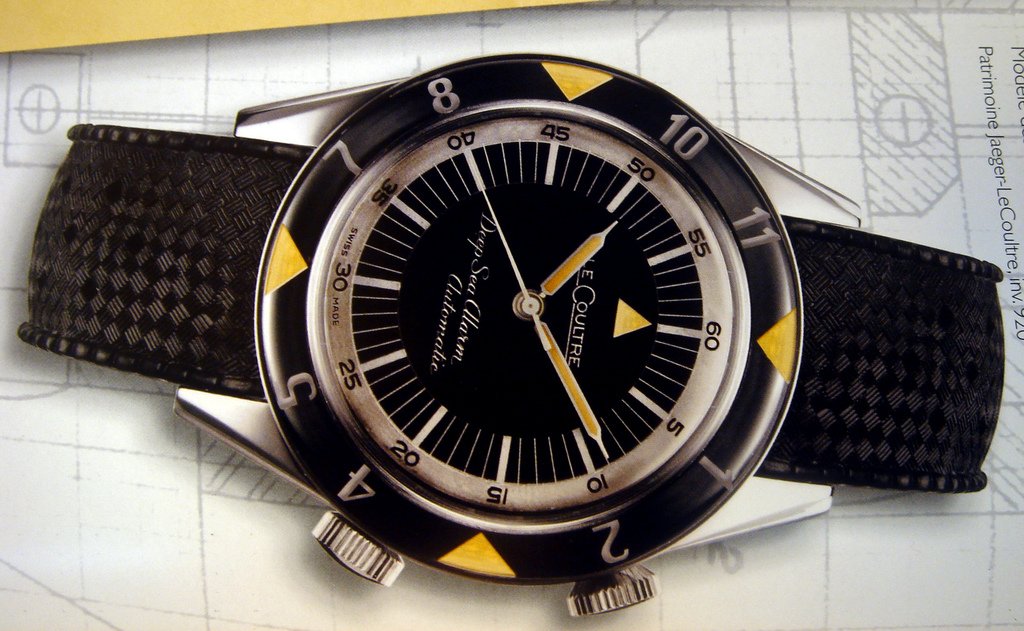 The Movement is the Cal 815, which was produced in 1956, and first used in the Memovox, before being introduced in this Deep Sea.

This is an Automatic Caliber ( with this special Bumper which gives a lot of charm to the watch when you wear it, as you can hear and feel this matt sound when winding ), with of course, the Alarm, and the Central Second. 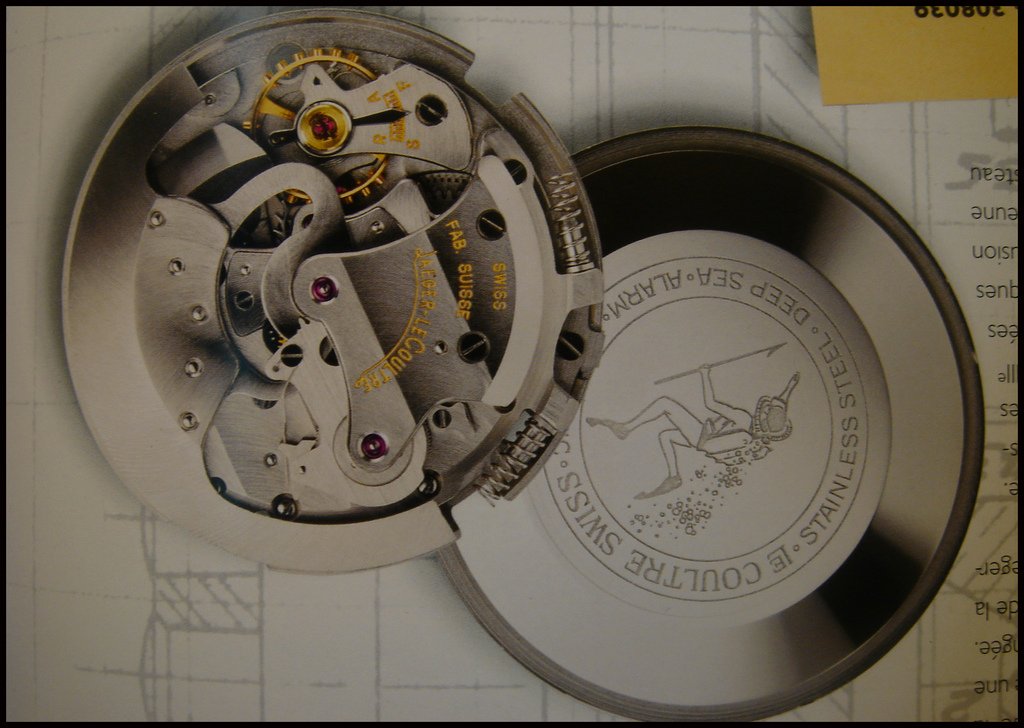 The lugs are much thinner than the famous Polaris, I'd even say ...slimmer.

Here a pic of the Polaris: 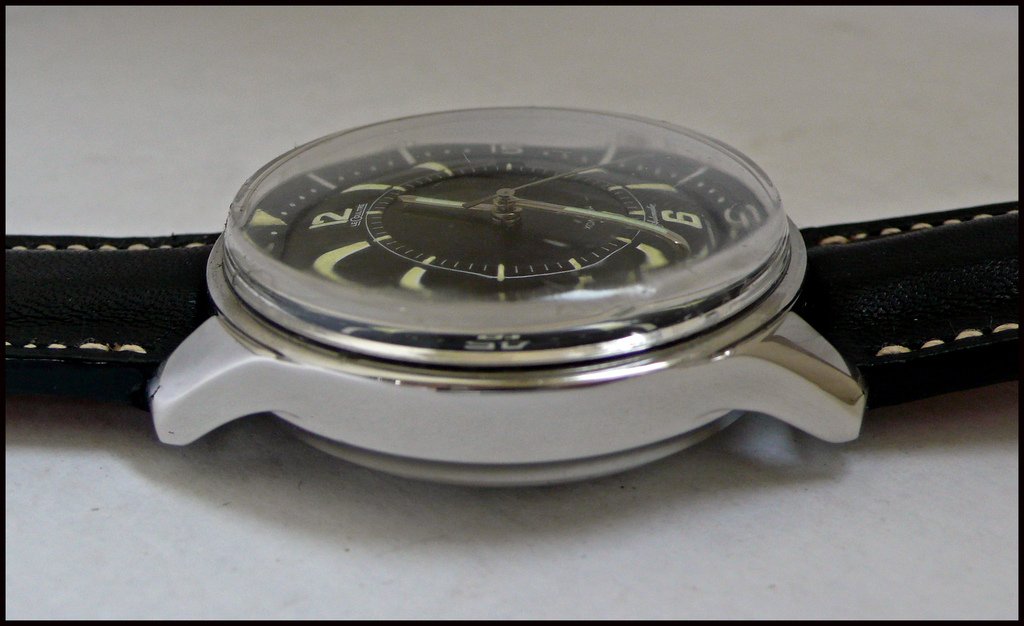 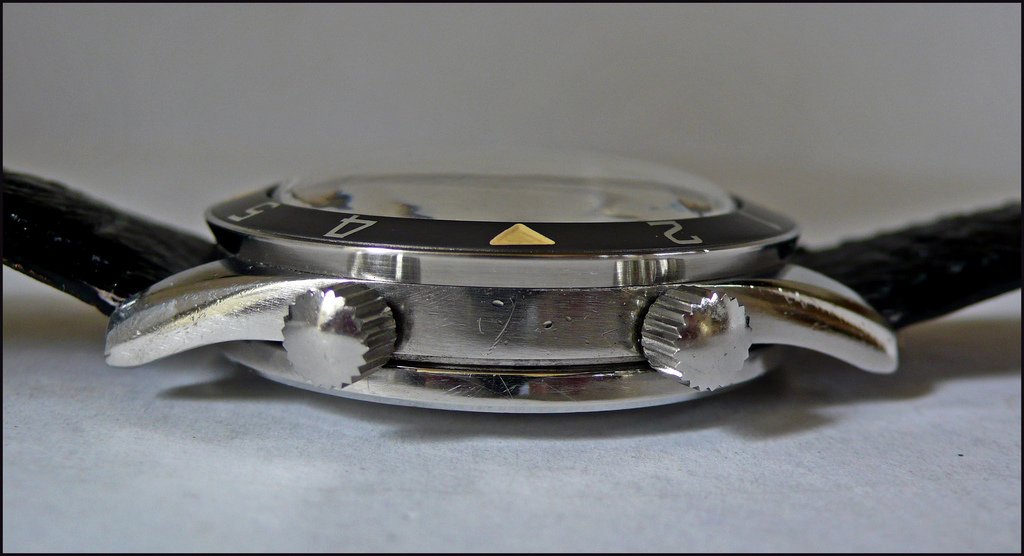 A powerful, and very nice dial...

Well you noticed that this is the main difference between the European and the American Version.

The European is more sober, more discrete, and more useful, as the indexes are luminous, which is not the case for the American model...which is strange for a Diver watch! 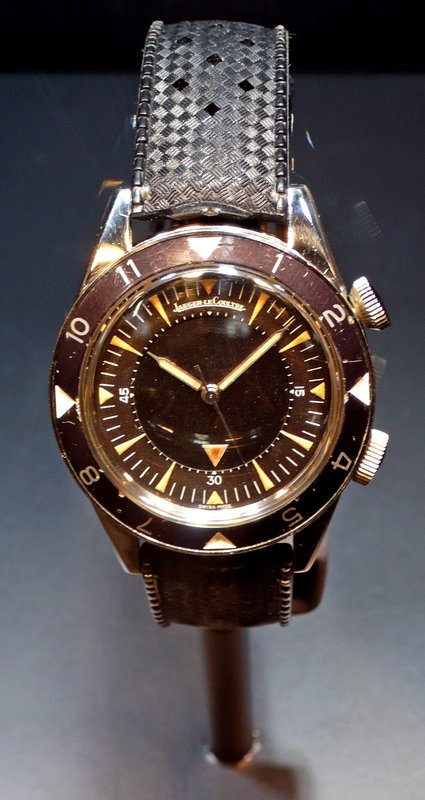 The American dial has a bit stronger personnality, more..." macho ", should I say, with these prolonged indexes till the alarm disc.

A nice signature, too, with a stylized signature, and as all american models, just .." Le Coultre".

The last difference is about the absence of writing on the European dial, and in italics, Deep Sea Alarm Automatic, for the American model. 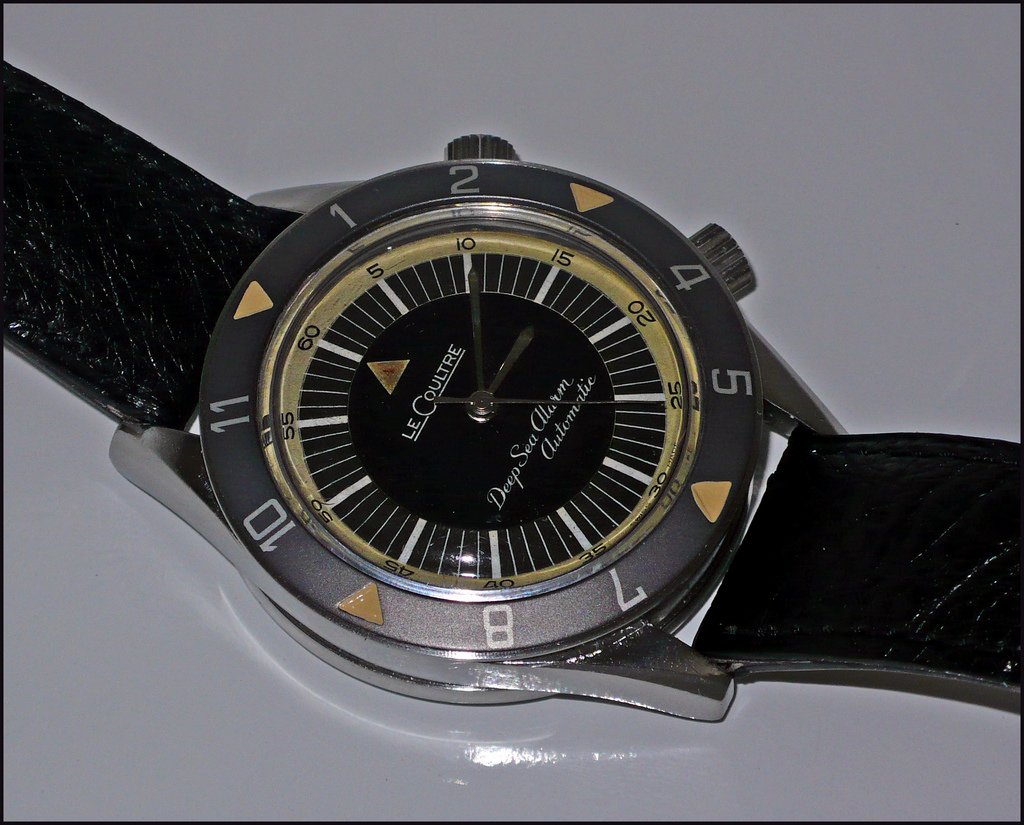 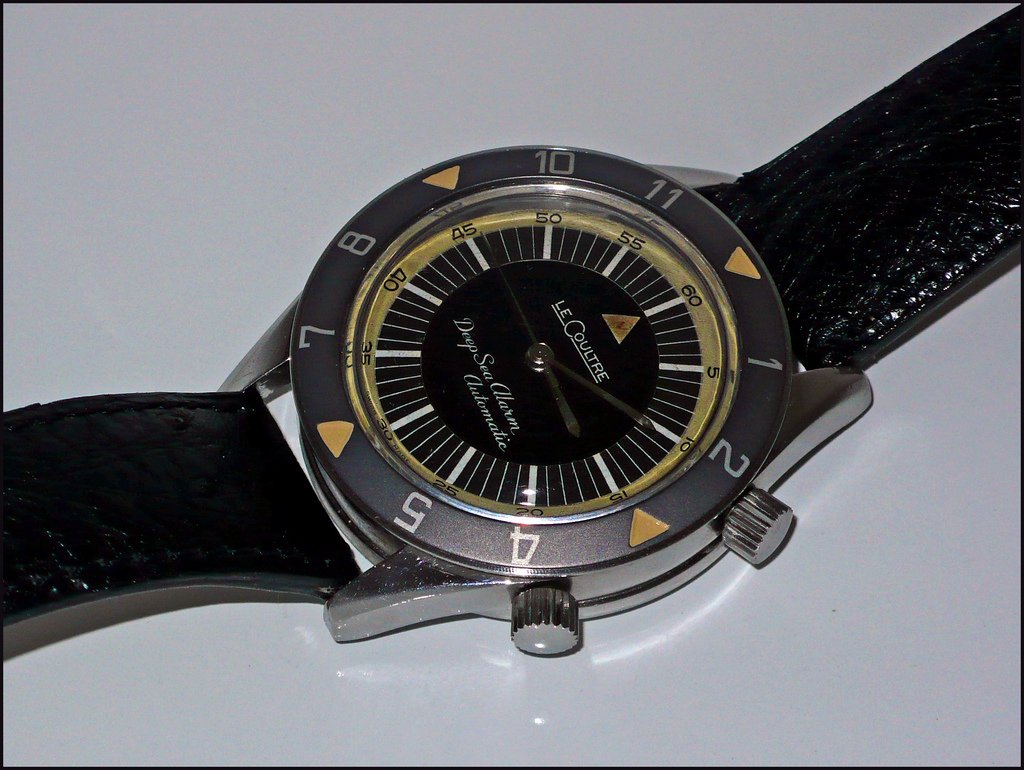 Here some macros of the dial, to enhance its strong personnality...

The triangle which is used as the Alarm indicator, which turns with the upper crown.

On this pic you'll see the finish of the dial, very patined, and with a lot of character! 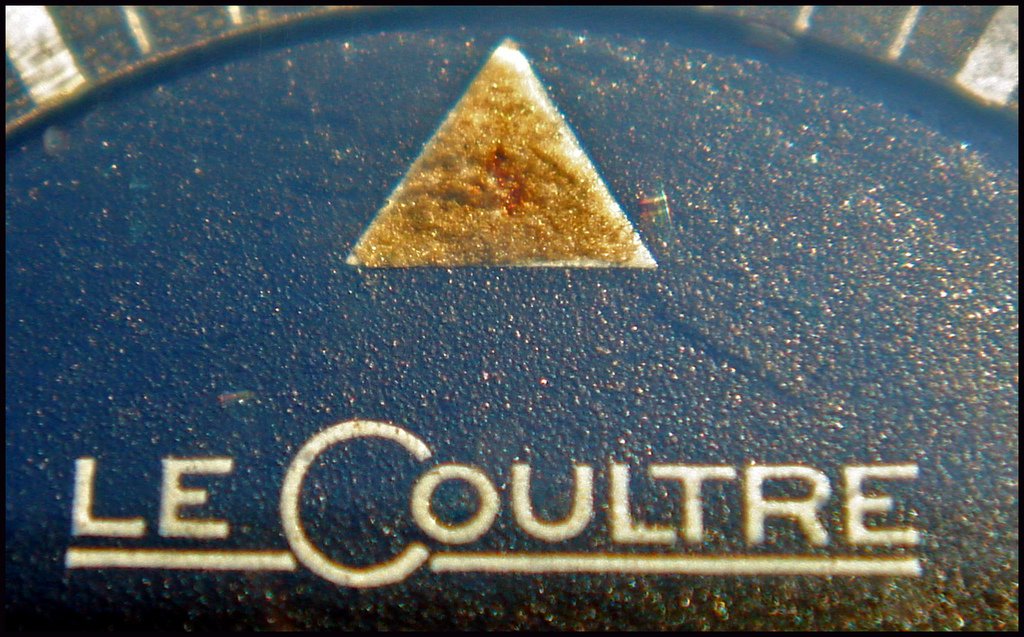 The whole dial, with these thin hands, the specific indexes, and writings...

Indeed a dial which had a beautiful life, if you look at its texture! 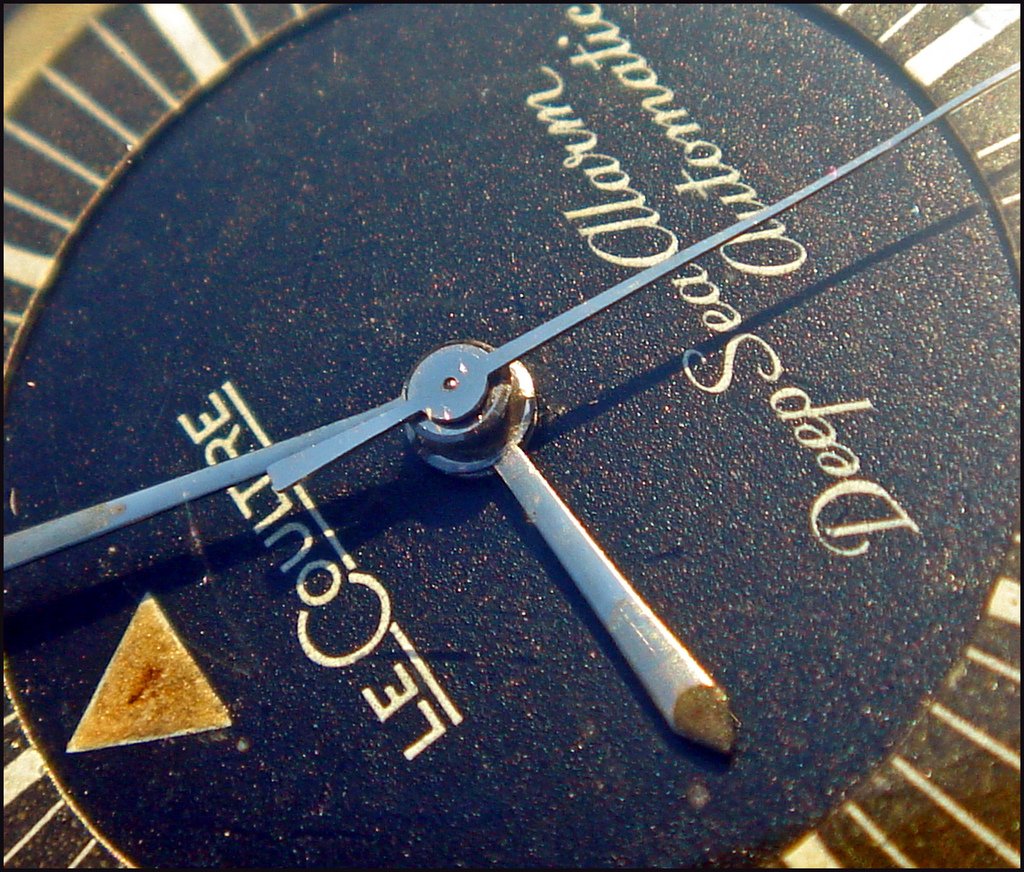 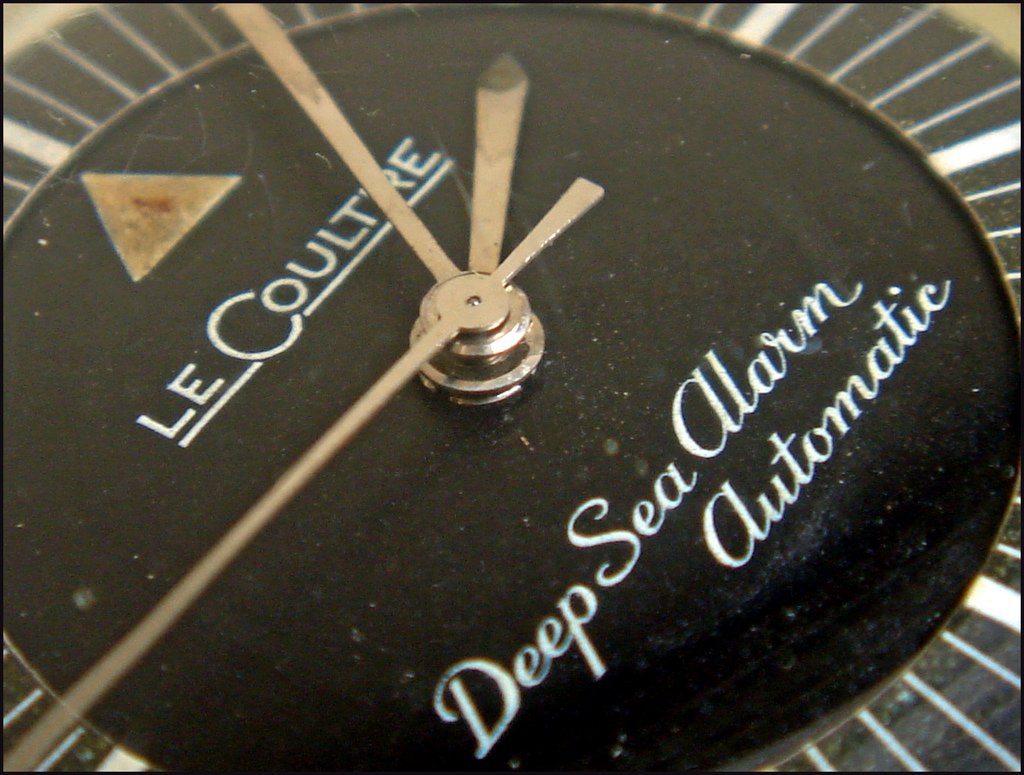 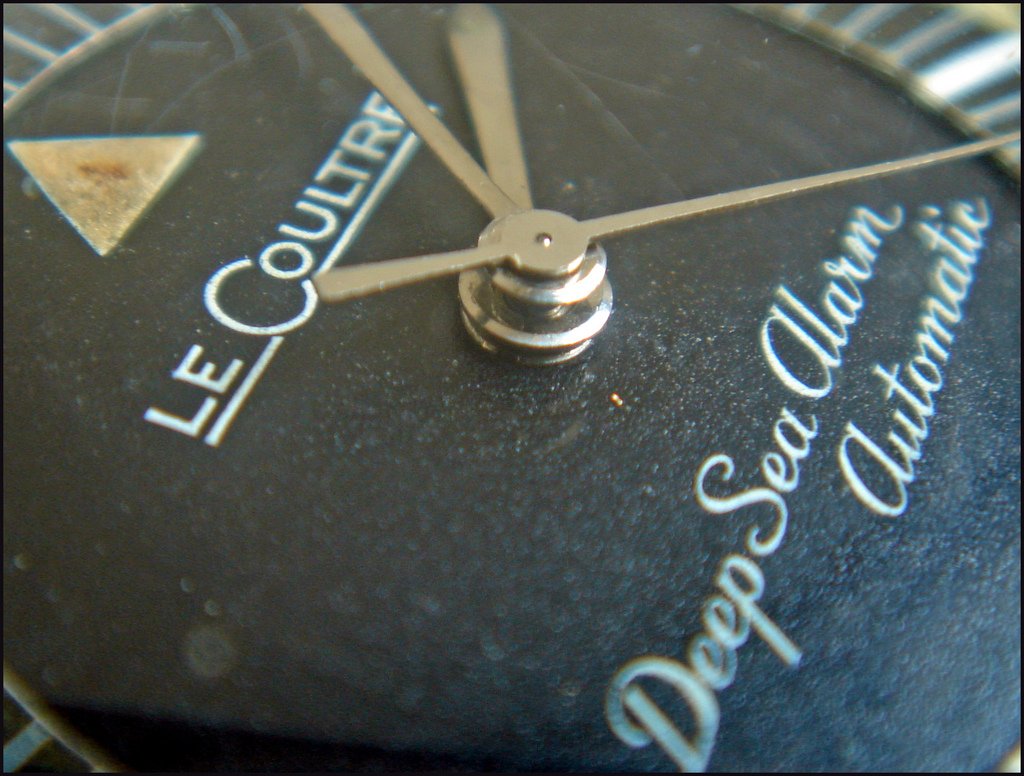 With the time, the black matt dial fades to grey, which is just sublime!

Now, let's see the specific case back, with a very nice engraving of a Diver in action... 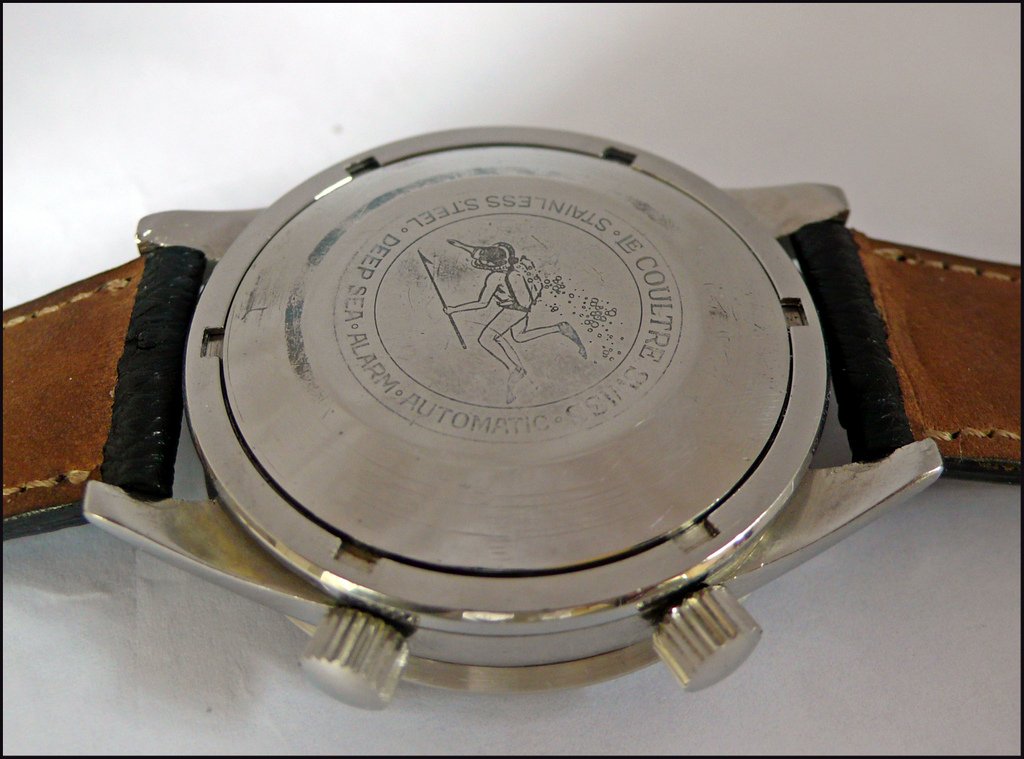 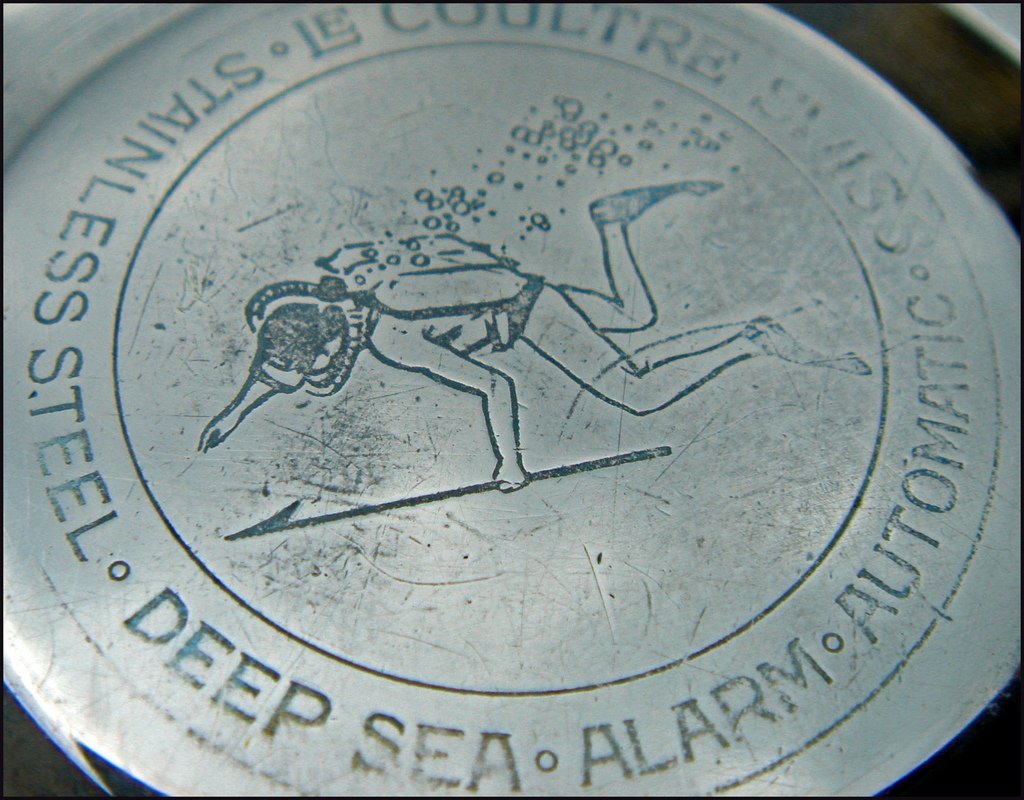 Please note that there were quite important differences about the hands and the Typo of the numbers on the bezel, from a model to another.

On the pic of the JLC Year Book I posted at the beginning of this topic, you have noticed than the hands were not the same.

In fact, these 2 kind of hands are correct.

Another particularity is the Typo of the numbers on the bezel...

The " 8 " of the Deep Sea of the Year Book is round, mine is squared, and once again, the 2 typos are correct, too.

The bezel is, AFAIK, always in metal, with an aluminium insert.

On mine, the bezel has been re done, but in a very respectfull way, compared to the original version, which doesn't resist, sadly, to the time.

You will also notice that the crowns are not the good one, on my Deep Sea, but I will arrange that, when I send my watch for a complete service.

The good crowns are thinner, and for the upper one, it is made in an " oignion " style.

As I previously said, this is not a big watch, as the case is 39mm only, which was a big size for the era, but much less than the 42mm of the Polaris.

The proportions are quite ideal...Not too big, a bit thick, but very well balanced.

The bezel is more narrow than on a Fifty Fathoms Mil Spec, and the dial is more important.

The bombed plexy is the final touch, indeed.

Here come the pics of the whole watch, now, to appreciate the volumes of this Deep Sea: 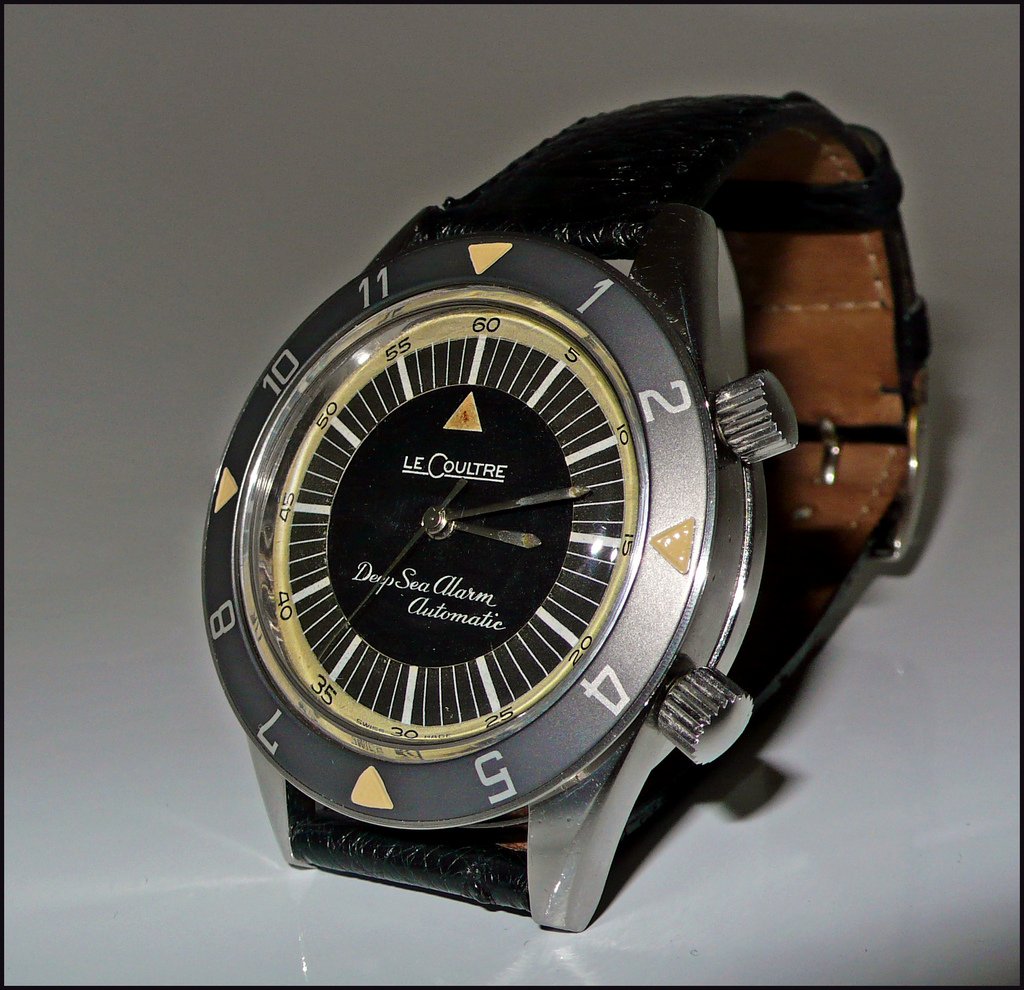 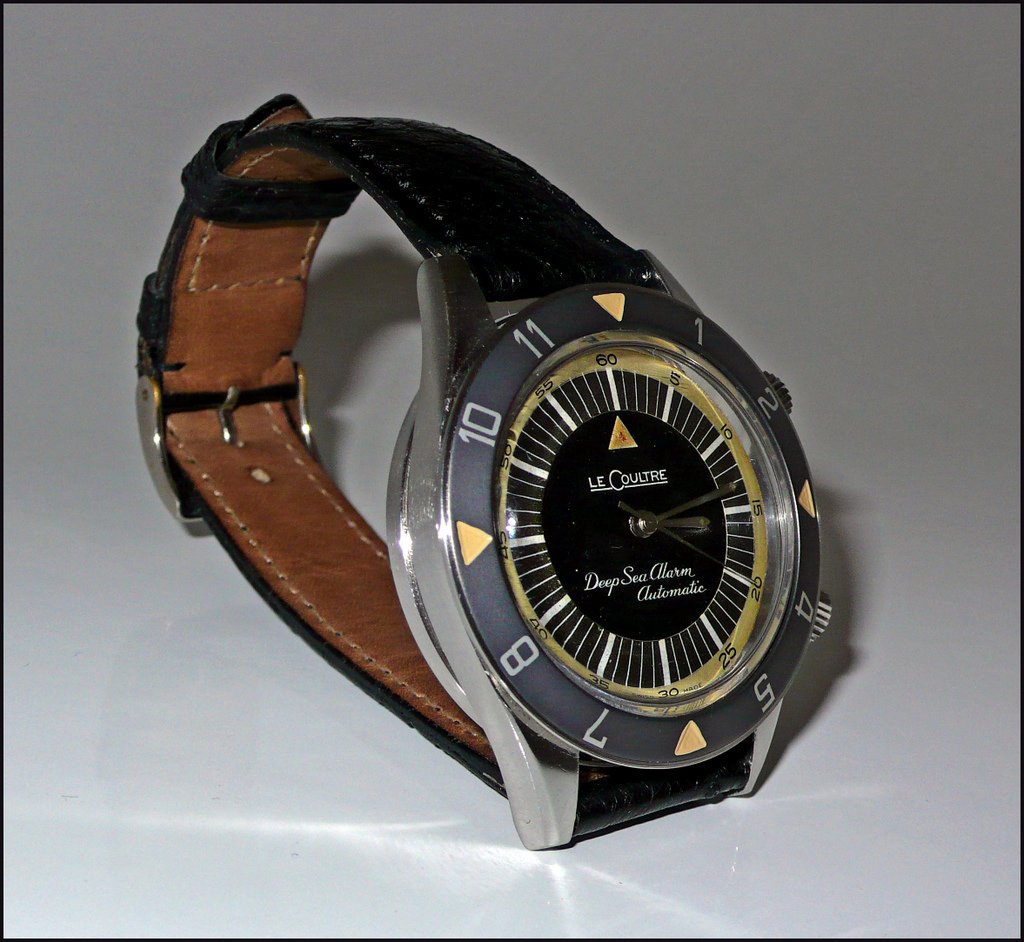 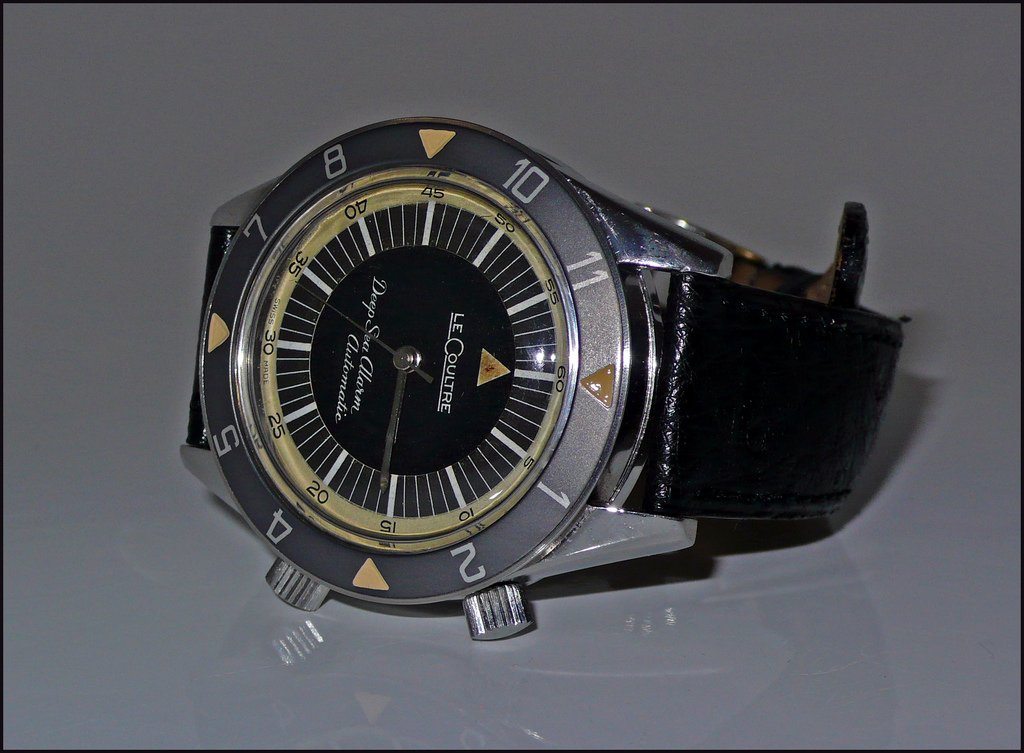 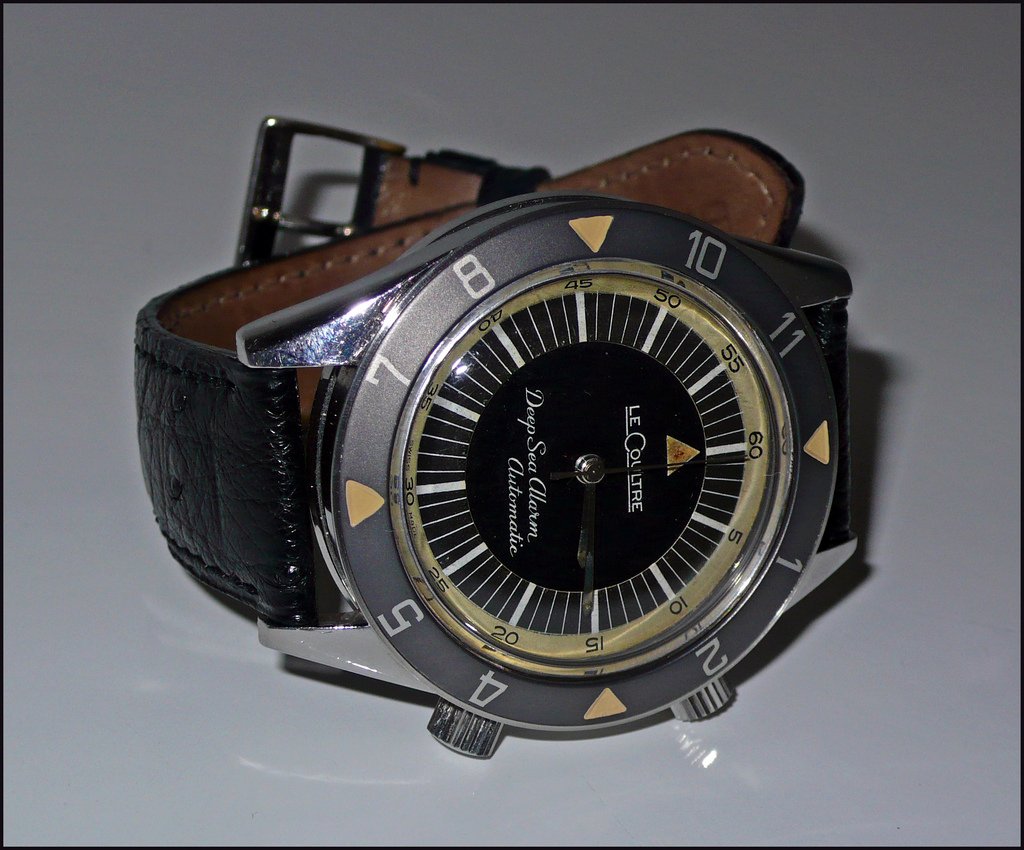 The amazing thing is that this watch, born in 1959, really has a timeless look, as a Rolex Submariner, or a JLC Polaris...which is the evidence of a perfect and well thougt design! 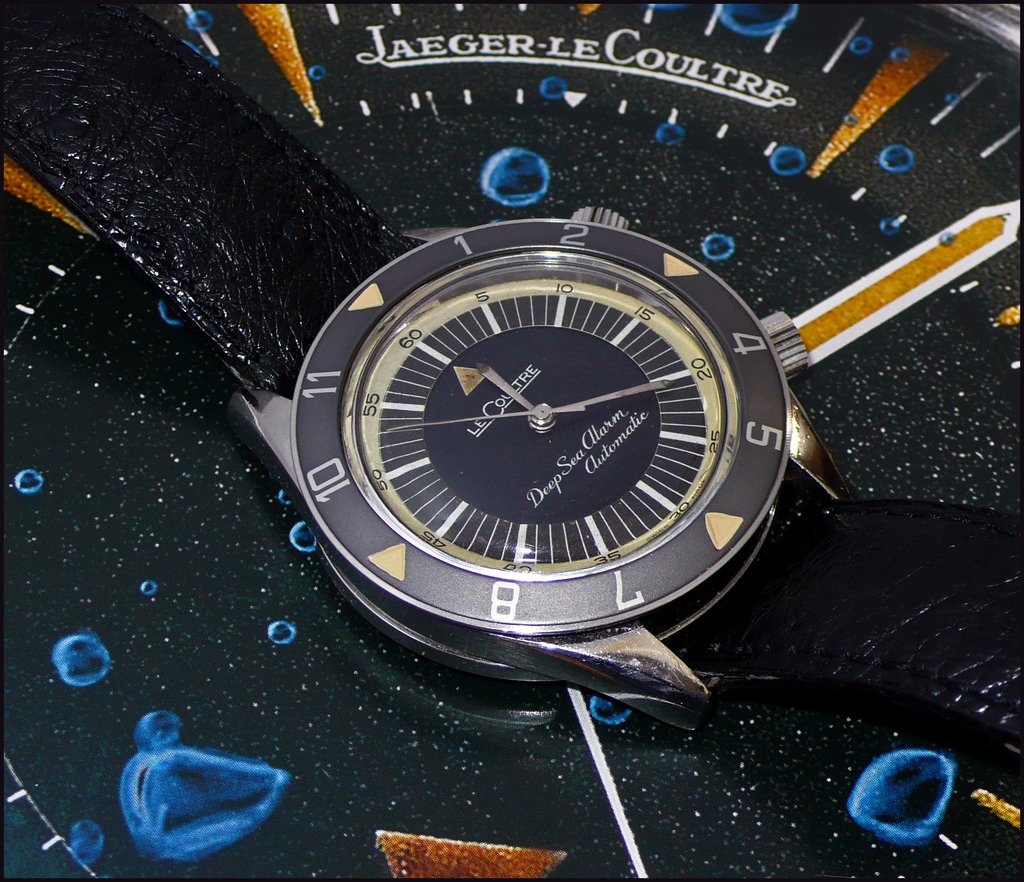 Wearing it is a great pleasure, as the watch falls nicely on the wrist, is very comfortable, and it is a permanent show...Visually, of course, but also acoustically, because of the Rotor Bumper, which makes a pleasant " CLONG " each time you move your wrist!

I had fun taking it in different situations to show you how distracting this watch is... 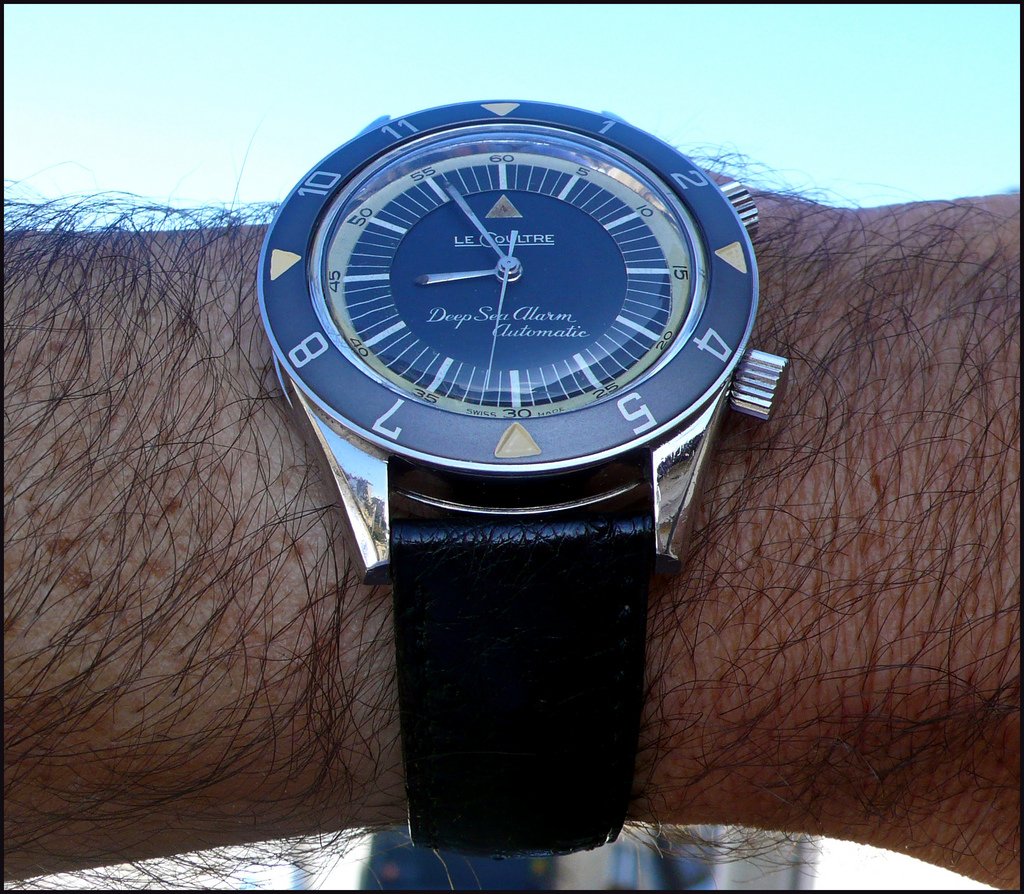 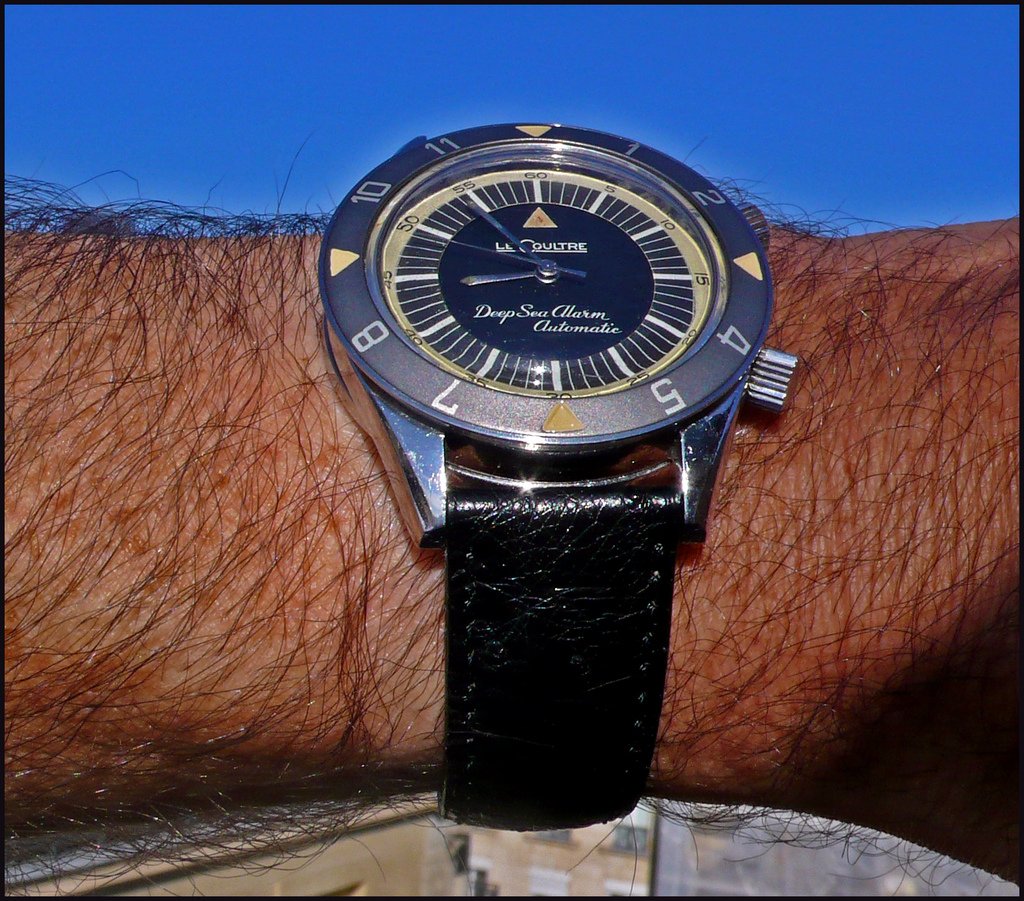 And under this angle, you get the feeling to have a Flying Saucer on your wrist, as the Domed Plexy is something very particular! 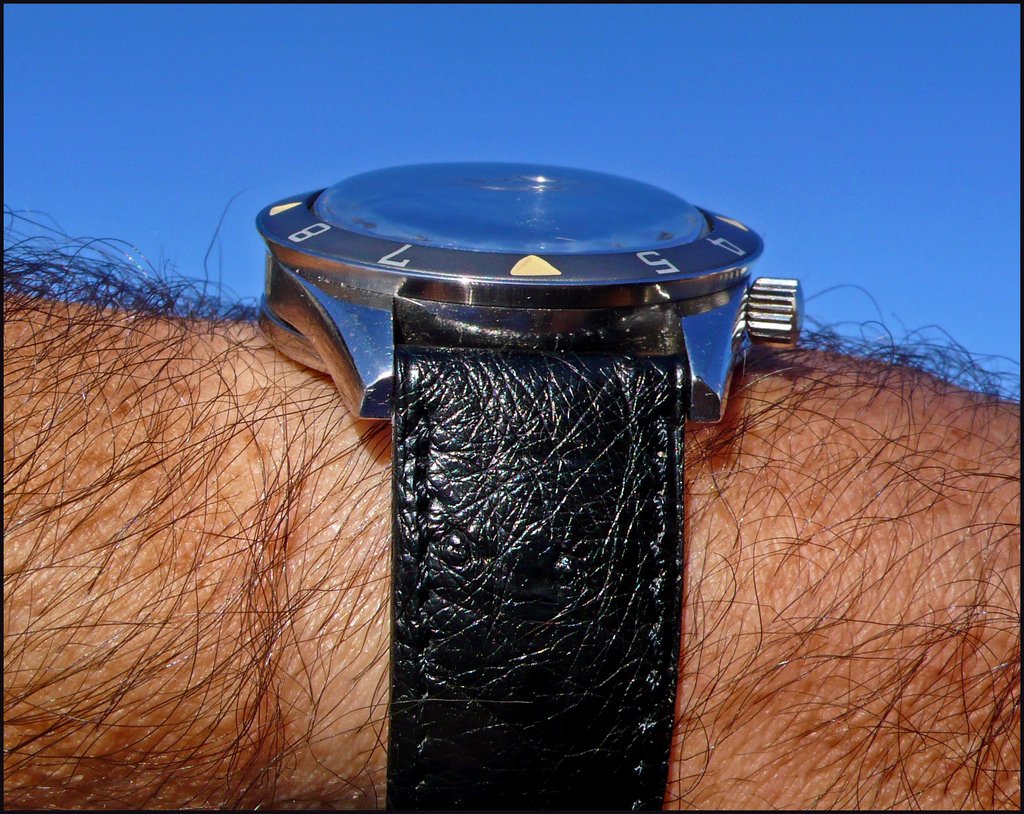 As to end with this review, I'd add that this Deep Sea is a paradox, and a rare bird.

A paradox, first, because this Diving watch doesn't have a turning bezel ( !!! ) nor always, luminous indexes ( only luminous indexes on the european model ) nor luminous hands ( with the exception of the European model, and the later American versions, which both received pointex skeleton hands).

But, you have another tool for diving experiences, the alarm, which is as useful as luminous indexes or rotating bezel...which gives you the vital information about the moment you need to come back to the surface, and it is water resistant to 100 meters, as a classic diving watch.

Finding one nowadays, in a decent condition, and authentic is quite an impossible mission.

So if you have the opportunity to see one spotting the market, check it well, and if it's a good one, jump on it.

This watch really deserves some big interest, as it has always lived in the shadow of the Polaris, which came in prototype in 1963, but is as interesting as this last cult watch, IMO, even if less known. 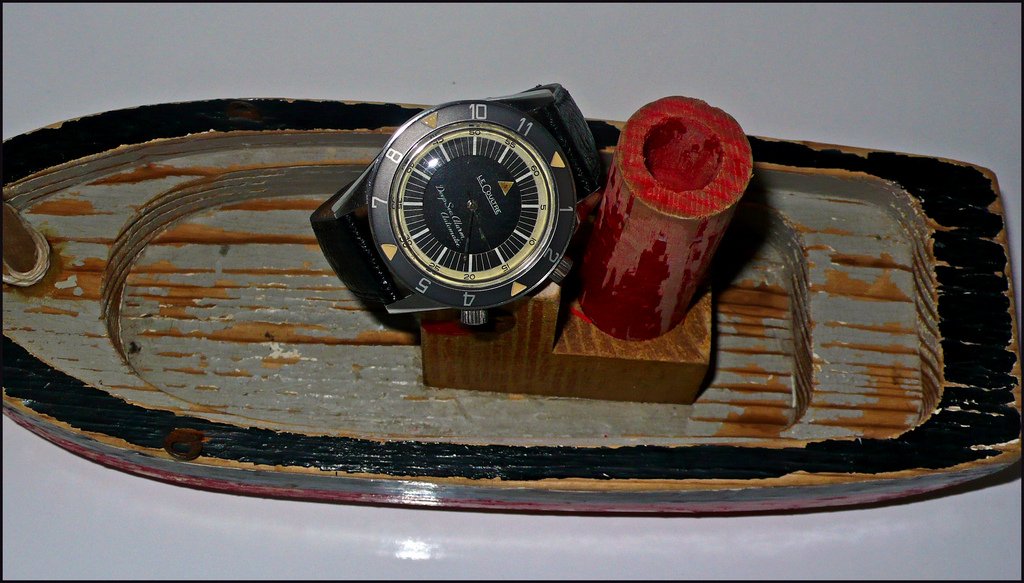 ( Boat by Kind Courtesy of my Daughter...LOL)

Best to all of you who were brave enough to read this review till the end...LOL.

By: matrix : September 8th, 2008-07:59
This is much appreciated my friend. Having my first JLC being the MCDC, I now truly value how far JLC has come in history of fine watches...I will have to agree with you on the European version being the top of the 2! It has a cleaner and more useful dial...
login to reply

That's the jewel on your (heavy) crown Nicolas! nt

You should thank me for this, Filip

By: amanico : September 10th, 2008-14:10
LOLOL These are magic watche,s with a lot of character and soul... Think about it: How many big bucks should you have to pay to get the same pleasure with the modern production??? You see? Now, you just got that I made you save a lot of money! ROFL! Best,...
login to reply

Fro the price of a complicated PP..YES! LOL

By: javierleon : September 8th, 2008-13:29
Thank for show and share this wonderfull vintage, i really enjoyed the review
login to reply

By: JediWatchFool : September 8th, 2008-18:50
...with all your vintage Diver's Memovox watches, have you had them pressure tested and if so, would you actually wear them in the swimming pool or sea?
login to reply

Been waiting for your pics and not disappointed

By: sqrl : September 8th, 2008-19:11
thats a great example and I am sure you will love wearing it do you have any pics of the movement? Nick
login to reply

In fact, I live with it since

By: fernando : September 9th, 2008-07:07
There is so much history in these fine timepieces and they have IMO withstood the test of time.They also seem to suit you very well,especially with the hairy arms, which maybe adds to their character and appeal. LOL I especially like the last pic. with th...
login to reply

Yep, Fernando, was there the Golden Age?

Finally the review is out. ;) Enjoy reading. Wear in good health. nt

Thanks for your nice comments, Terenceho!

By: Krieng : September 10th, 2008-00:26
..both your write up and all the pics (especially the boat in the last scan ) Amazing watch and here comes again the nice patina which always drive us crazy. Thanks for your nice post, beautifully done my friend. Cheers
login to reply

By: amanico : September 11th, 2008-13:06
Yep, the patina is the common point with all these watches... Once you see that, it's difficlut to forget it... Panerai is wonderful, some other brands too, like these JLC, or the Pola. Best. Nicolas
login to reply

By: E.J. : September 10th, 2008-15:26
Well, this is my first post into the forum Jaeger.... With photos and stories like these, I must admit that lately I go around the idea of having a Jaeger in my collection sooner than later, although perhaps have to wait because a Pam is about to fall ......
login to reply

Emilio, hope that it won't be your last post