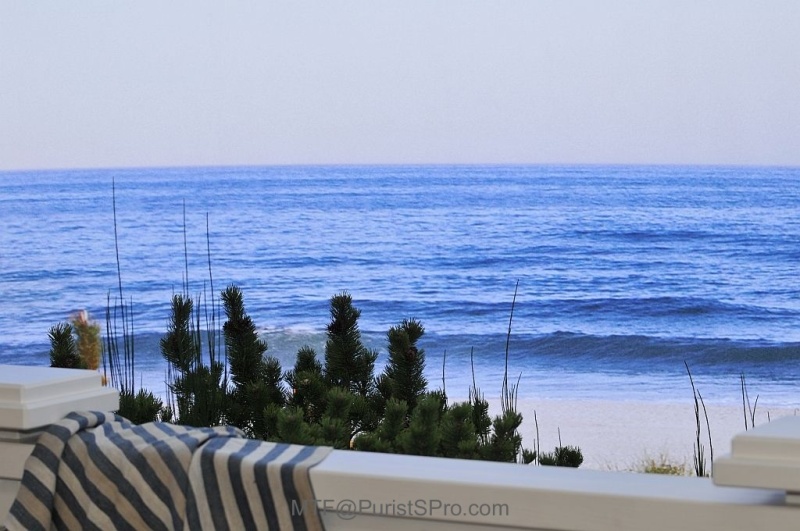 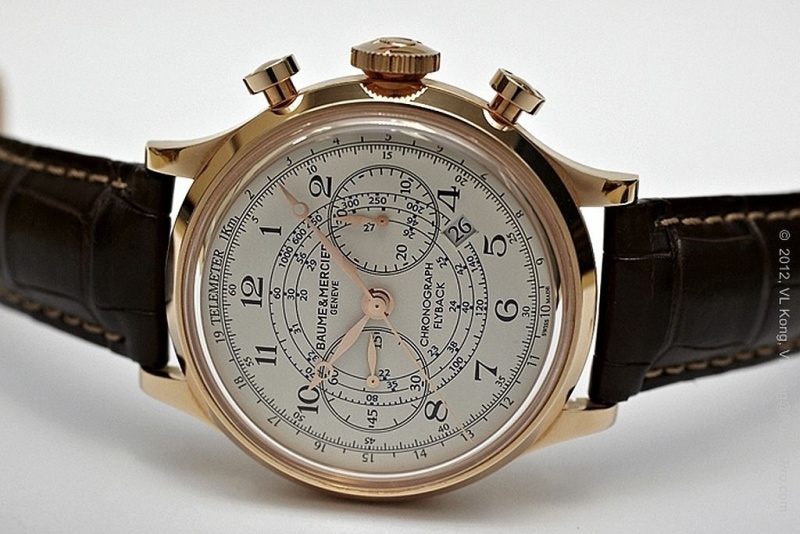 2013 Themes.
Baume & Mercier is the 7th oldest Swiss brand founded in 1830 by brothers Louis-Victor and Célestin Baume with the motto, “Accept only perfection, Only manufacture watches of the highest quality.” Entrepreneur, Paul Mercier, joined in 1918 to lay the foundations for a business philosophy that was open to the world. His business acumen and esthete principles contributed to bringing Swiss watchmaking to a wider audience.

Current CEO – Alain Zimmerman – wants Baume & Mercier watches to be true icons of accessible luxury; with the added advantage of being available at more moderate prices, within the reach of a wider clientele. The focus is on watchmaking history, traditional inspiration and contemporary style. For the client who has decided to acquire a real timepiece, Baume & Mercier want to be the "go-to" brand for timeless style and an assured product: "You can't go wrong with a Baume & Mercier".

For 2013, Baume & Mercier introduced a whole new collection for men – Clifton. The first preview at the end of 2012 was in Shanghai to great acclaim and the whole collection was revealed at SIHH 2013. This collection of men’s watches is inspired by a museum timepiece that dates back to the 1950s. 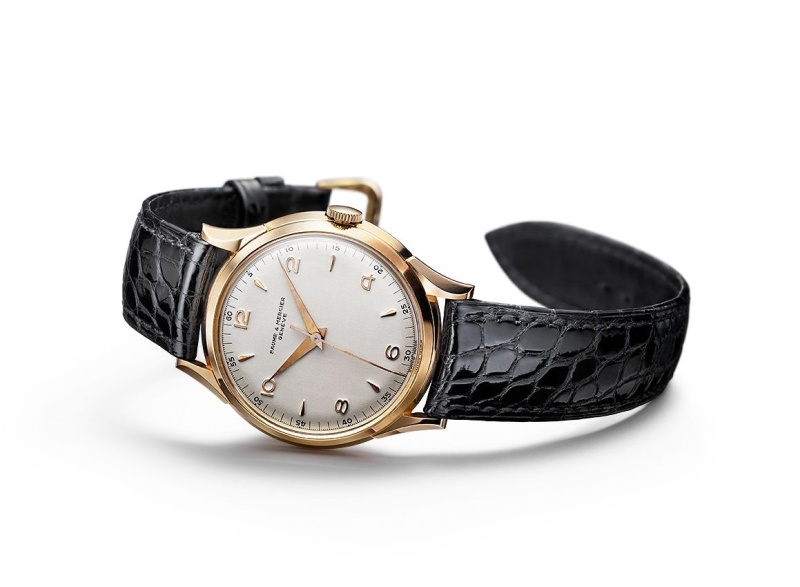 The design signature for each timepiece was pared down to the purest essentials, from the hand-wound mechanical version in 18K red gold (Clifton 1830), to the automatic version also crafted in 18K red gold, with various, different components adorned in polished satin-finish steel. These highly refined watches with clean-design sun satin-finish dials, or featuring a triple calendar display and moon phases, are aimed at those who want the assurance of timeless elegance. "You never make a sartorial mistake choosing a Baume & Mercier." 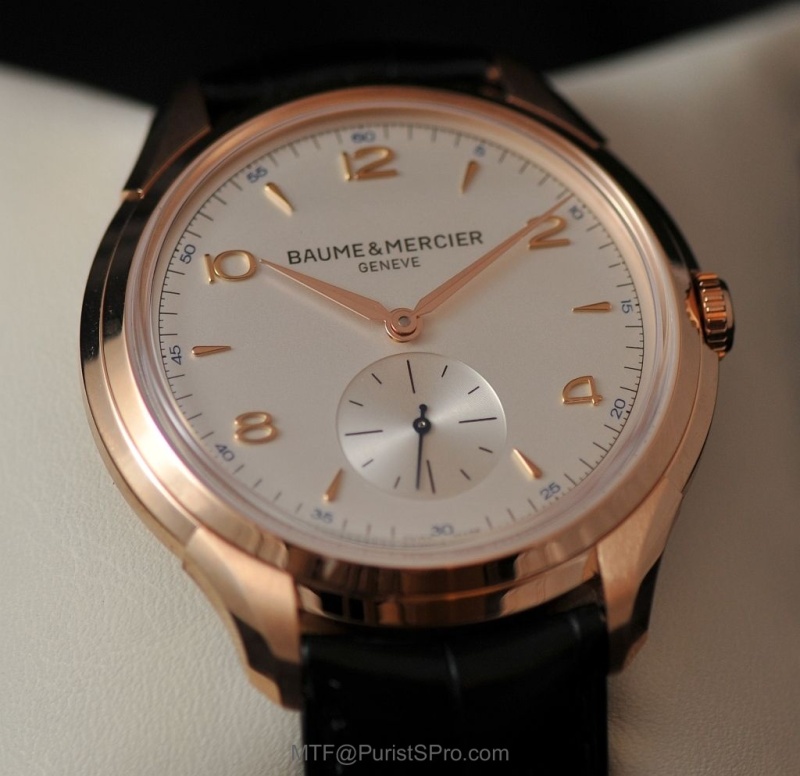 Baume & Mercier reference watch, inspired by a model from the Baume & Mercier Museum is the showpiece of 2013. The contemporary 42 mm diameter case is crafted from solid 18K red gold. The designers are particularly proud of the polished and satin-finished case with double bevel on the profile. 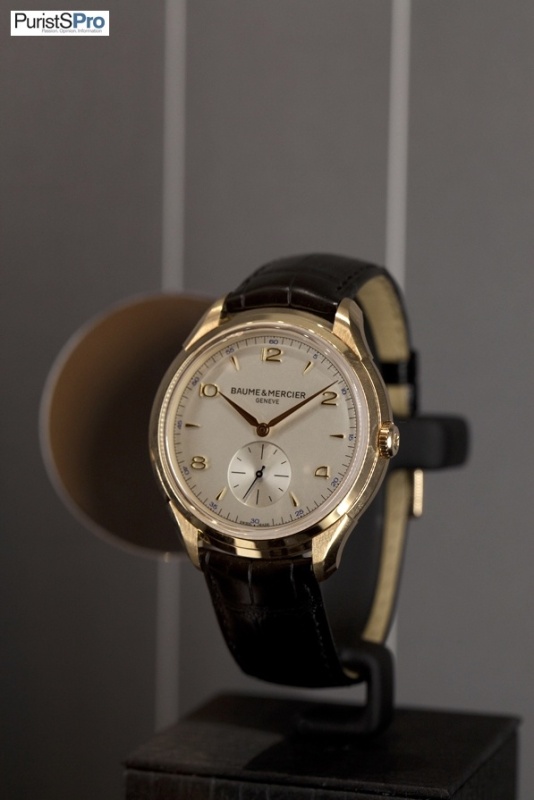 The dial is curved to match the domed sapphire crystal. As a nod to the past, the “chevée” shape is identical to that of vintage acrylic watch glasses. The domed, opaline silver-coloured dial is snailed finished and set with riveted gilt Arabic numerals and indexes. 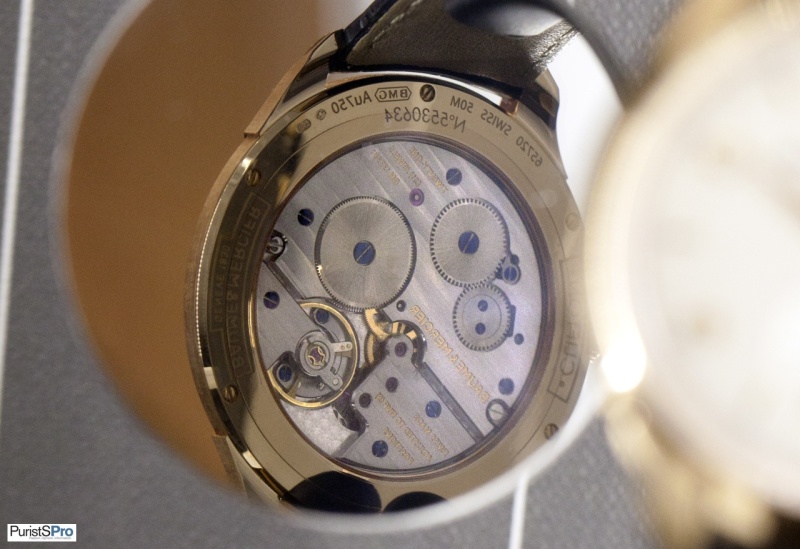 The Clifton 1830 is fitted with a manufacture movement adapted for Baume & Mercier by the La Joux-Perret Manufacture and it is visible through the sapphire crystal case back. 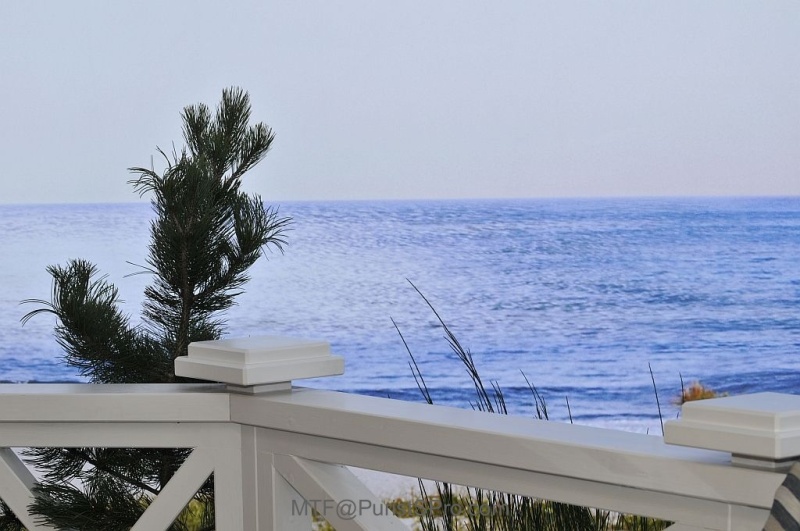 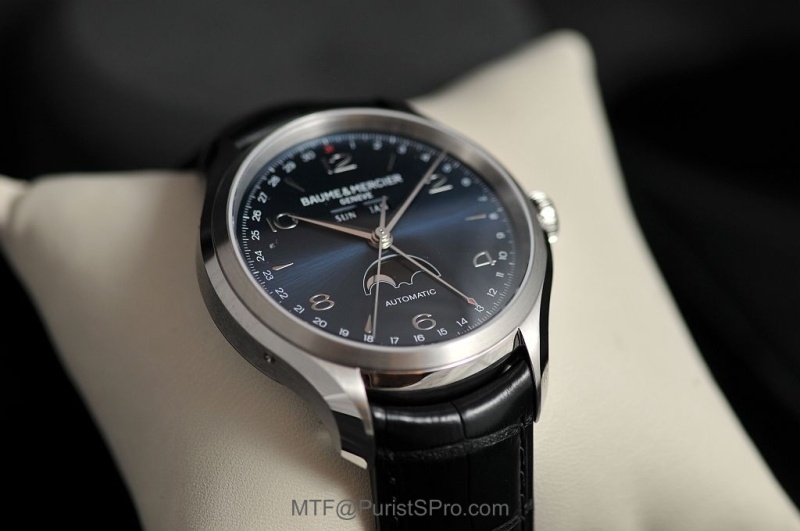 Different play of light changes the sun-burst satin blue appearance of the dial. 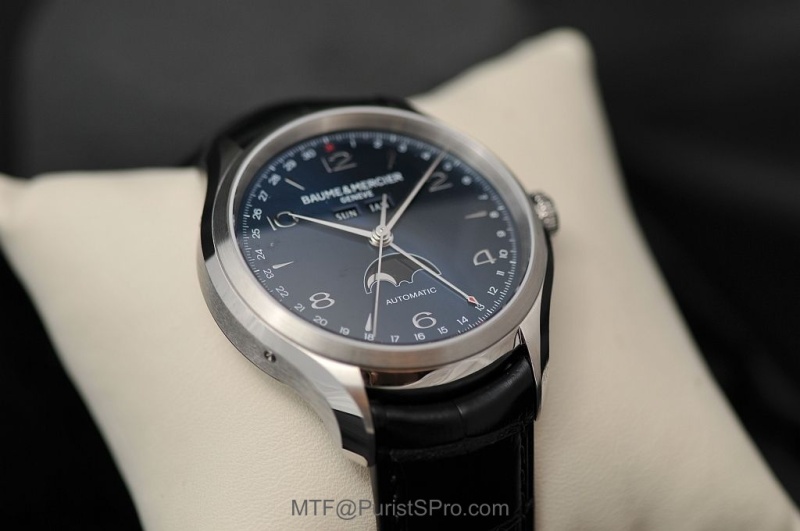 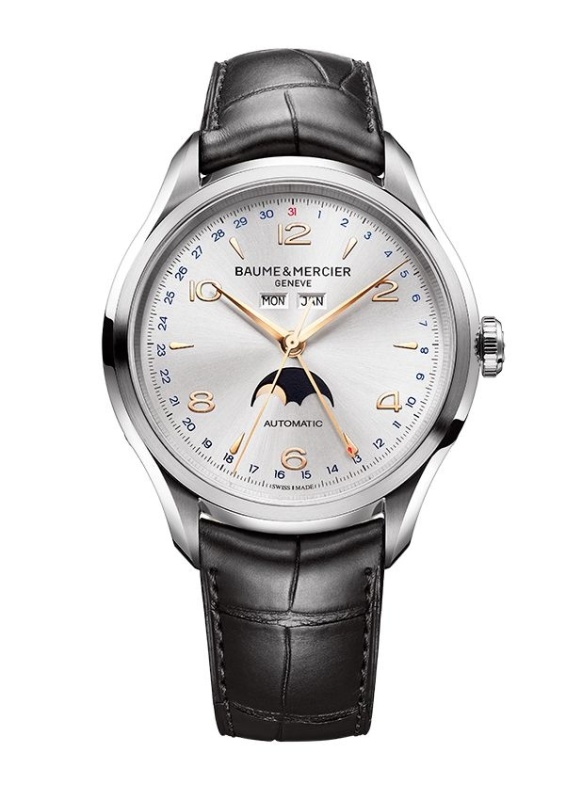 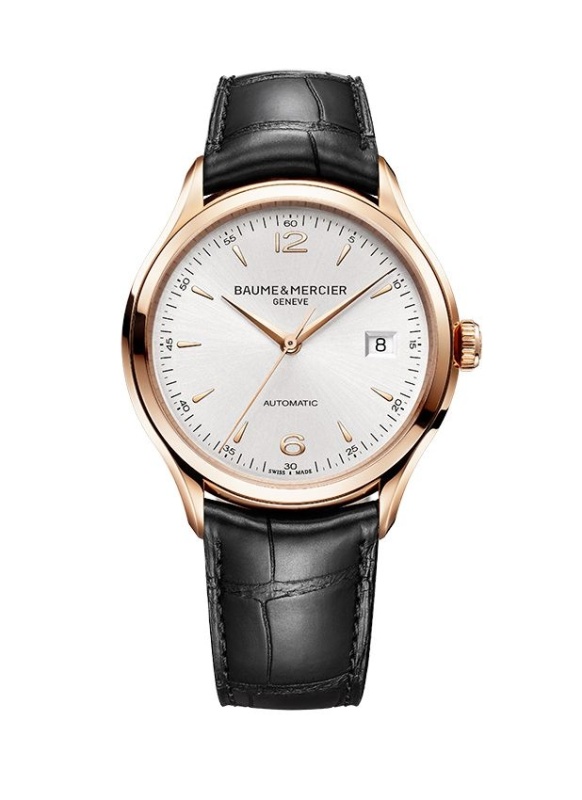 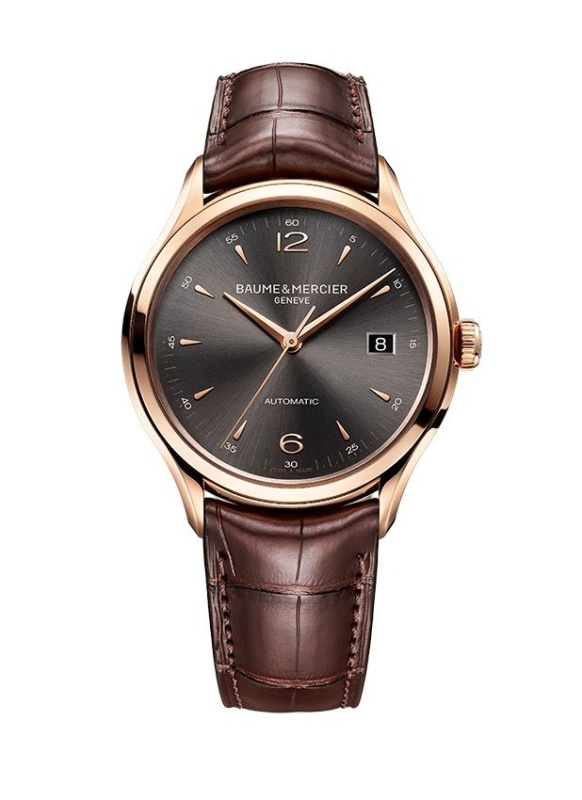 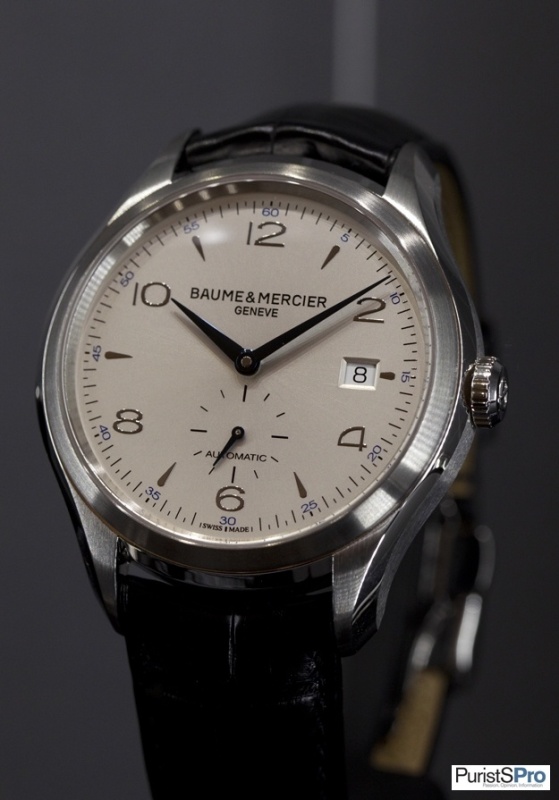 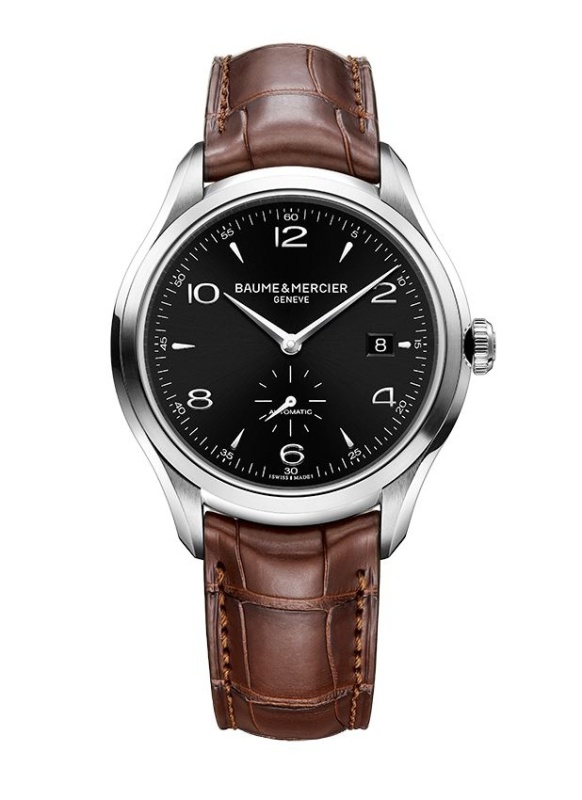 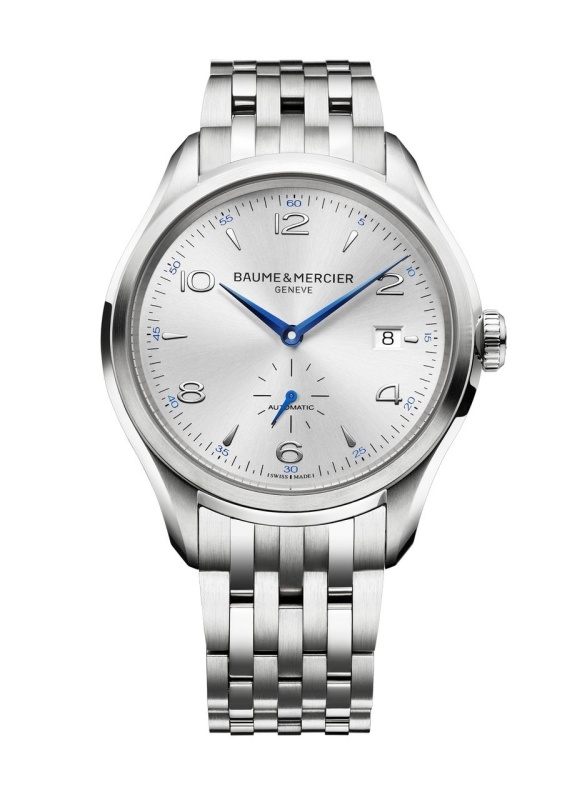 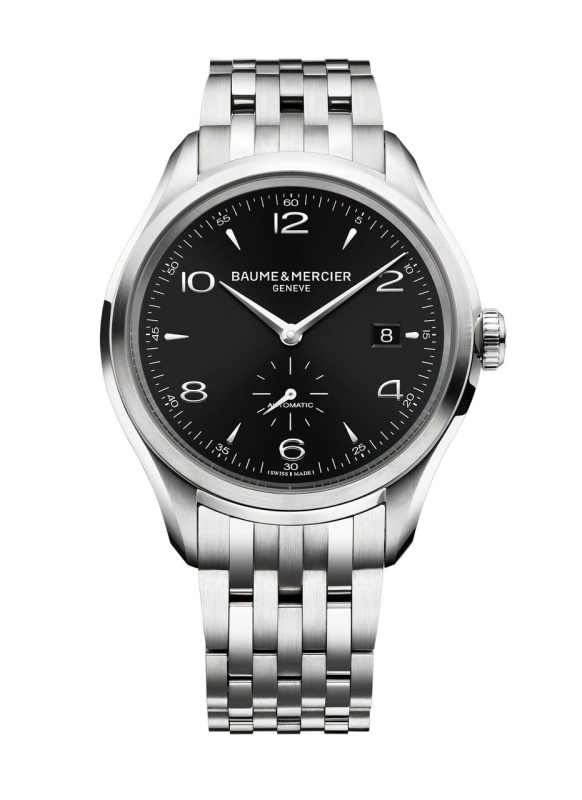 Linea is one of Baume & Mercier's iconic collections of sleek and elegant women's watches. For 2013, they tapped into contemporary trends by approaching the young Canadian actress, Emmanuelle Chriqui. 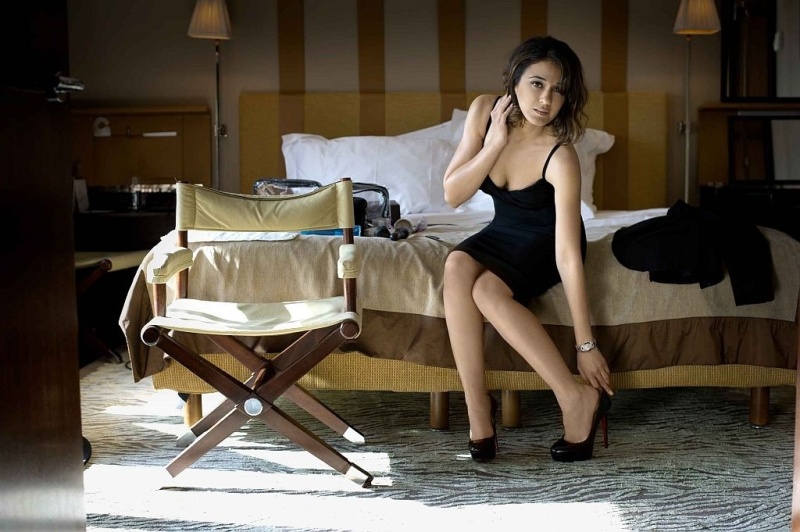 Ms Chriqui is famous for her work on the T.V. series "Entourage" and "The Mentalist". Appreciating "the simple pleasures in life.", she embodies the natural elegance that Baume & Mercier associate with the Linea collection. She helped the design process that came up with an assortment of woven lambskin bracelets in key shades of the Spring/Summer 2013 season. 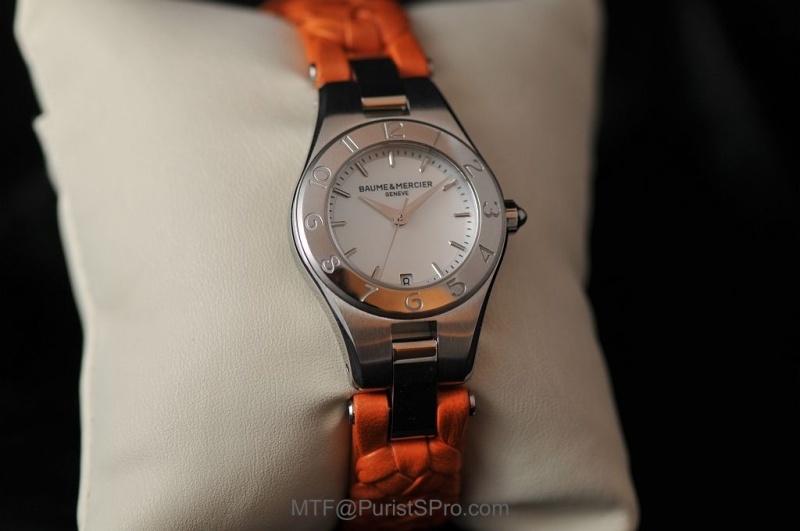 Linea Spring/Summer 2013 Limited Edition is a 27 mm case quartz movement watch with snailed-finish mother-of-pearl dial and riveted indices. The unique selling point is the interchangeable hand-woven lambskin bracelet – white, beige or orange – that are not compatible with the Linea Automatic watches. 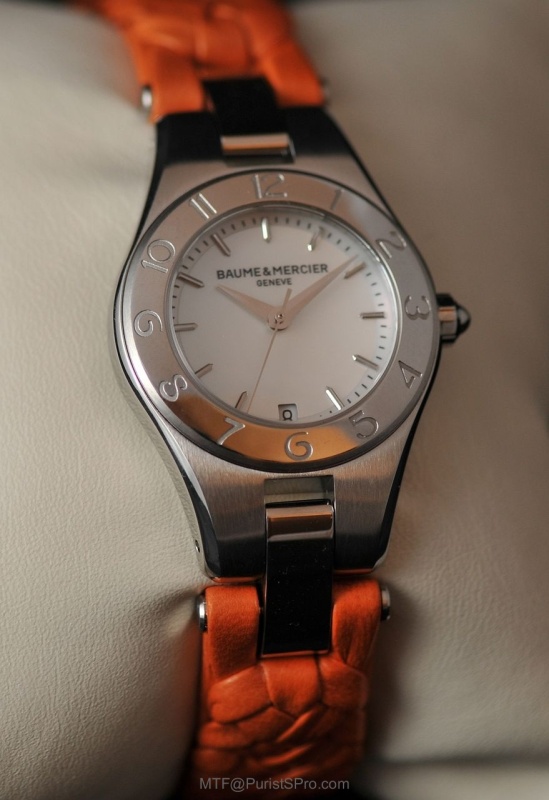 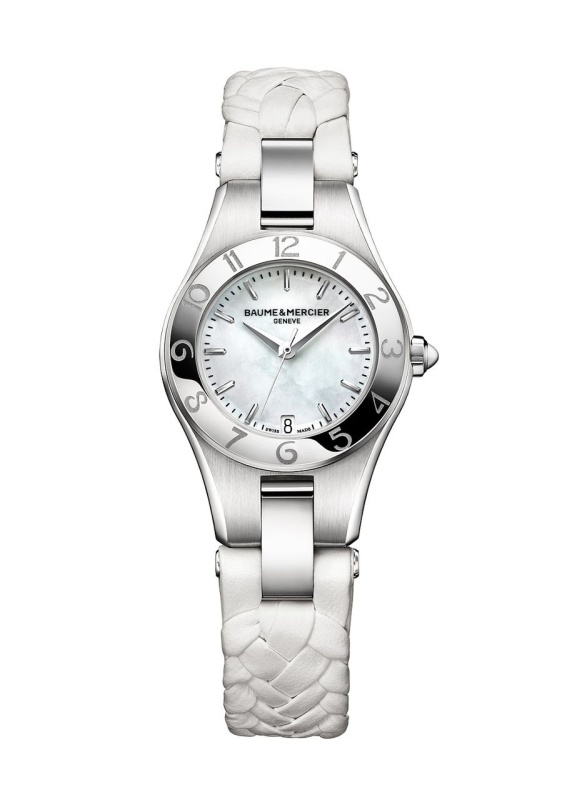 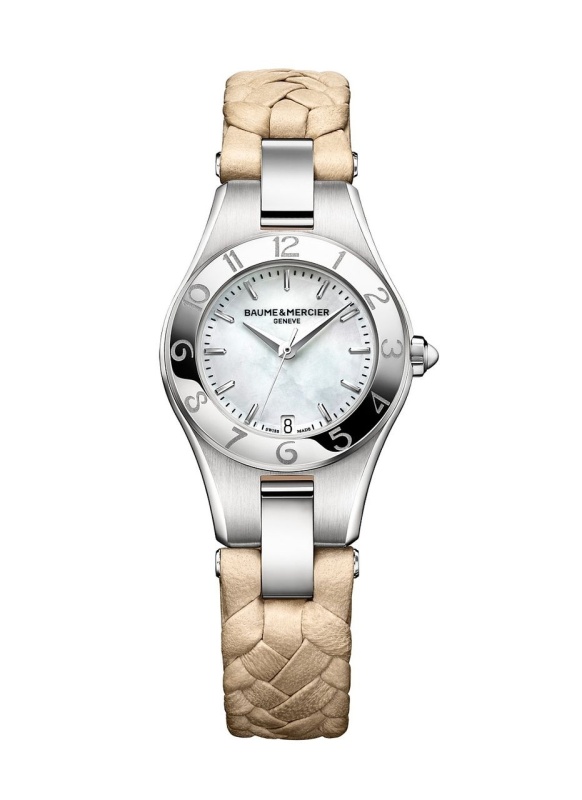 Linea Automatic
Since its launch in 1987, the Linea has been available in steel or two-tone steel-gold with interchangeable bracelets but with quartz movements. The new Linea Automatic contains a Swiss mechanical movement in a 27 mm case. The time display includes a central seconds hand and a small date window at 6 o'clock in the mother-of-pearl dial set with 11 diamonds. 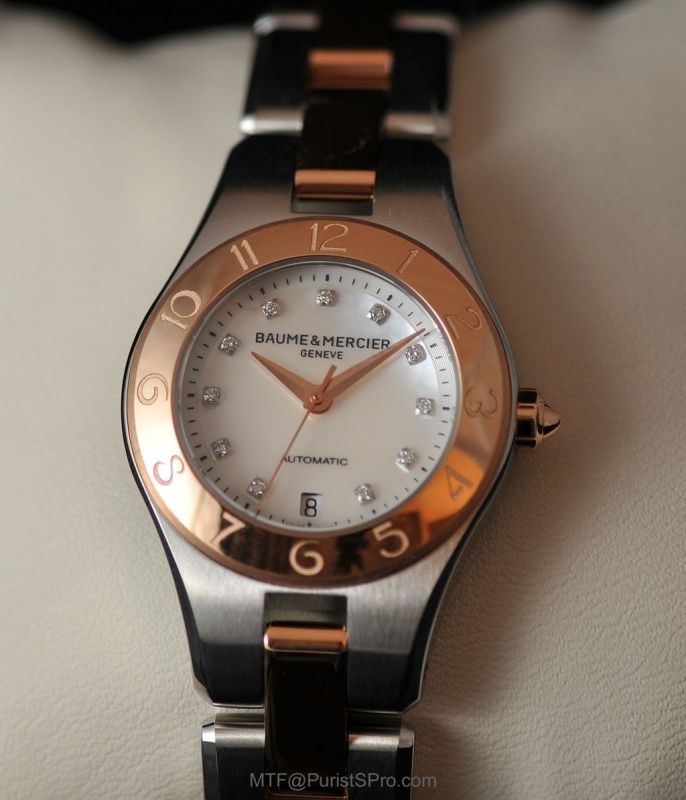