Antoine Martin, Part 2: The Caliber AM 39

Antoine Martin Part 2: The Caliber AM 39

It gets a bit technical now….but I truly believe it is worthwhile to spend some time on the technical features of the Cal. 39.

The concepts of the caliber 39 have been developed by Martin Braun over many years. The main concepts are as follows:

·        build a bridge between the time when the most beautiful mechanical movements were made, around the beginning of 1900 when the modern era began, and contemporary production methods.

·        showcase the most beautiful component of a mechanical watch: the balance.

Some of the above-mentioned points cancel each other out in principle. A large balance needs much more energy, which negatively influences the power reserve. Nonetheless, the movement is able to reach six days of power reserve.  If the balance had only been half as large as it now is, the power reserve could have been doubled. 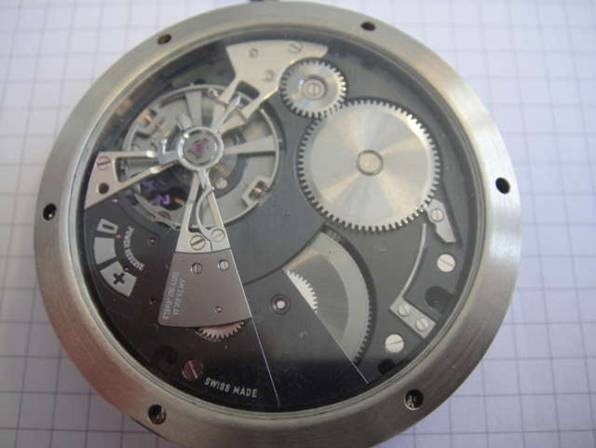 First prototype of the Cal. 39 from 2009. Note the huge balance wheel 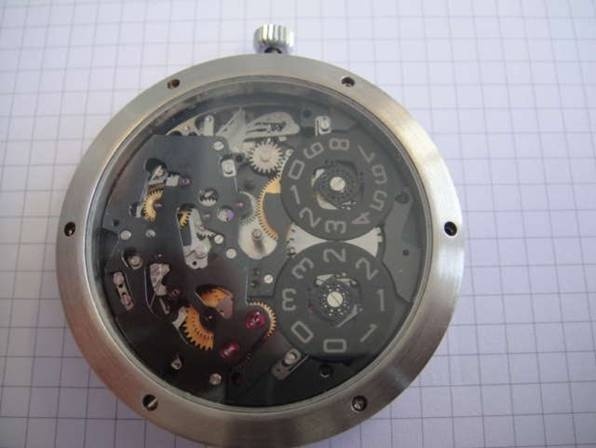 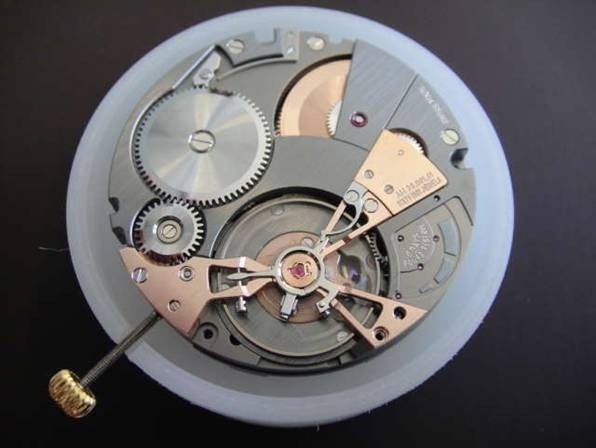 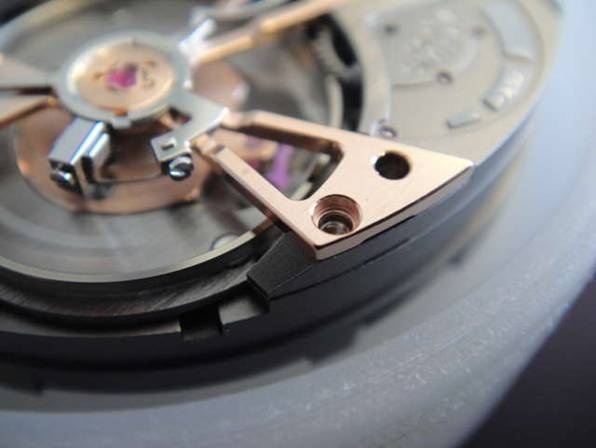 Detail of the gold bridge

Since I am neither a watchmaker nor a mechanical engineer, some of the following descriptions (and the drawings) are from the technical manual on the caliber 39.

·        Lever excenter for the precise adjustment of slide to the banking 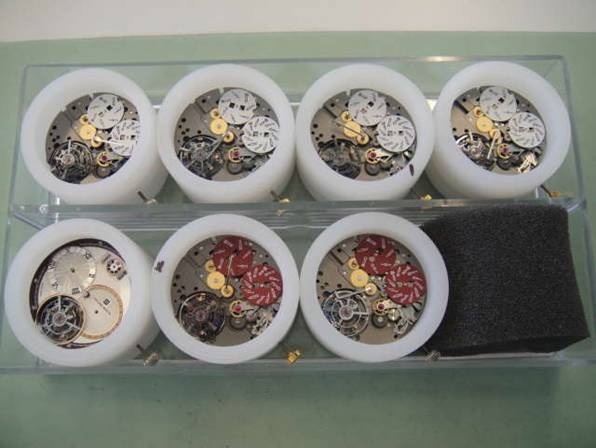 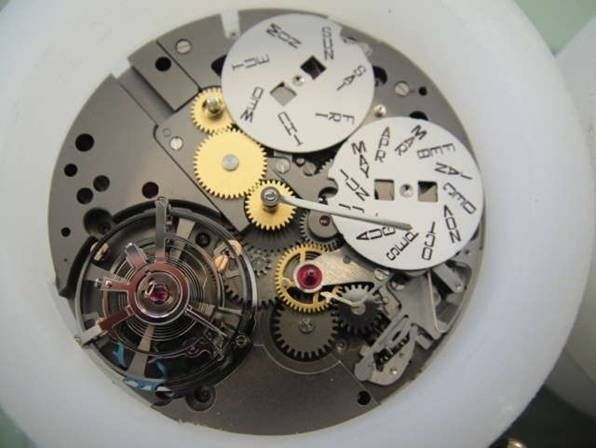 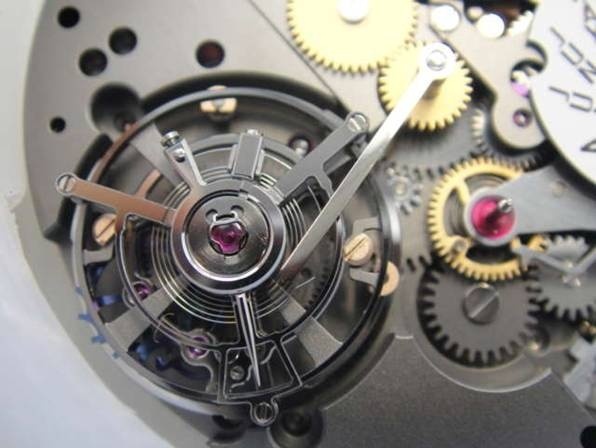 Detail of the tourbillon cage 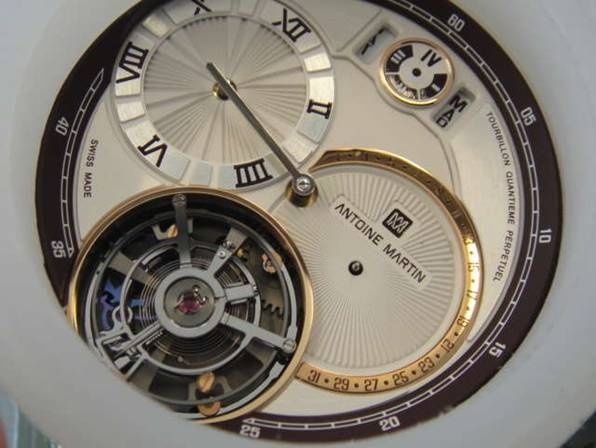 Same movement, but with dial, w/o hands

The escapement features a free sprung balance spring and is regulated by two gold screws. It runs with 2.5 Hertz or 18'000 vph. The most obvious difference to other movements lies however in the extra large balance with diameter of a proud 17.5 mm, making it one of the largest balances ever used with a Swiss lever escapement.  It is made of Grade 5 titanium. So much for the general characteristics. Martin Braun has packed a lot of innovation into his escapement which I am going to describe in some detail.

From my point of view, the two main innovations are a) the improved geometry of the Swiss lever escapement and b) what Antoine Martin calls the Aerodynamic Amplitude Stabilization. However Martin Braun has incorporated a few more interesting elements into his escapement system

1.      A lever excenter precision adjustment, which allows to precisely set the so called slide to the banking (the following drawing may clarify the meaning)

2.      a mechanism which looks like a swan-neck, but actually is used to center the balance wheel and hence reduces the possibility of shifting during a shock

Martin Braun had the idea to improve the Swiss lever escapement for years, but only the arrival of silicium technology has enabled the realization of a new, improved geometry. In short, the geometry of the pallets and the anker wheel has been optimized, which was previously not possible using because of the rubies.

Martin Braun describes this innovation, which they call HPE, as follows:

"The originally calculated angles of the Swiss lever escapement have always represented a compromise of affectivity and oil retaining using the capillary effect of certain angles. Since the silicium escapement functions completely without oil, it no longer needs the related angle calculation.

Simply put, this escapement now makes it easier for the escape wheel to set itself in motion at the beginning of the discharge. Only when motive energy has built up, do we transmit an energy impulse to the balance.

Mathematically, we can expect a higher energy yield of about 7-8 percent. Additionally, the impulse pin made of silicium has an optimized shape, which also brings another 1 percent increase. In practice, we were able to determine an increase in amplitude from 300° to almost 330° in direct parallel comparison to the conventional design of the Swiss lever escapement. "

In a consistent use of the silicum technology in the escapement, not only the pallet lever and the escapement wheel are made of silicium, but as well the impulse pin. 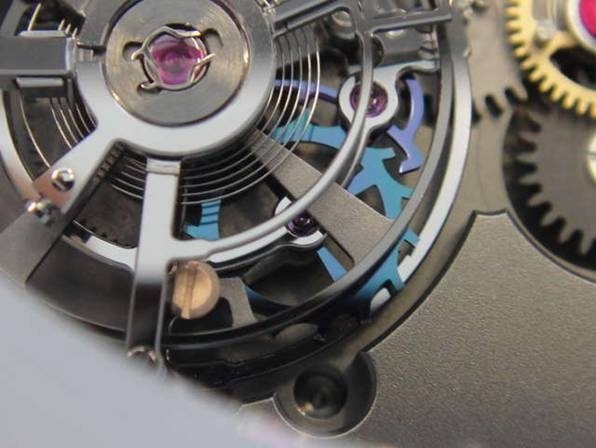 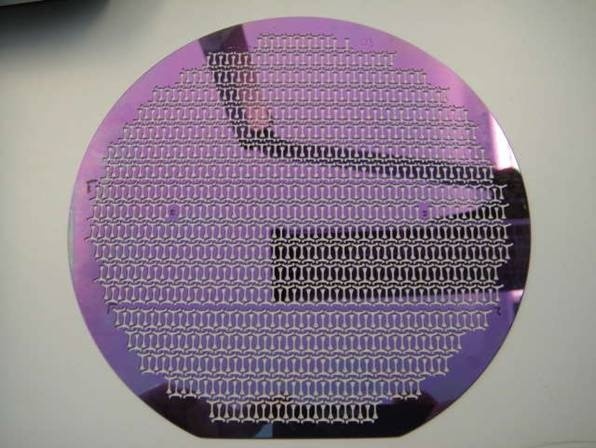 silicium waver for the pallet lever 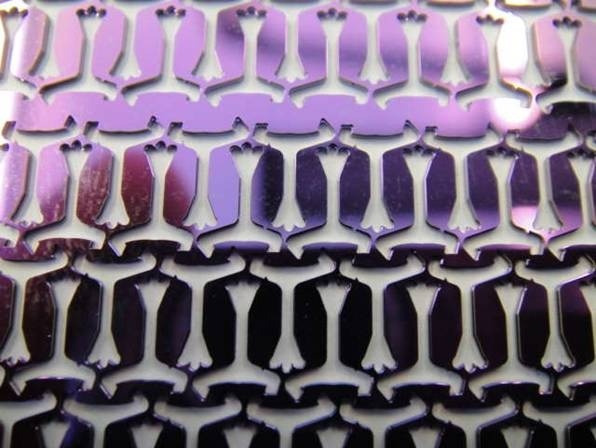 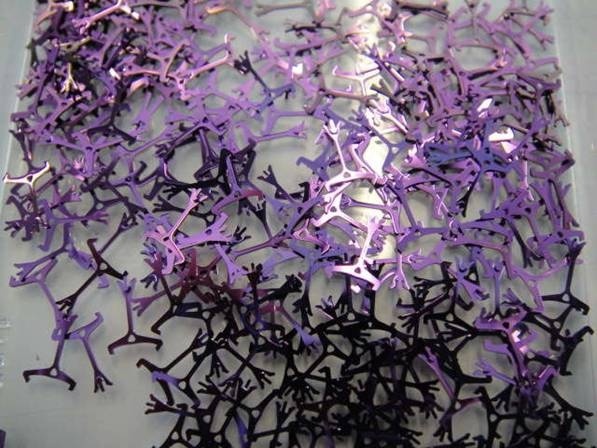 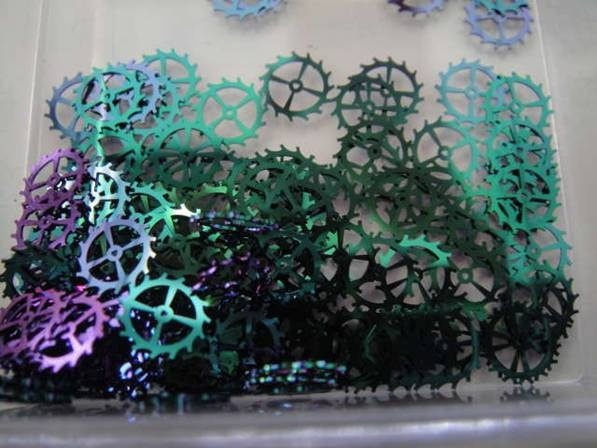 An innovative approach to amplitude stabilization has been incorporated into the movement AM 39.001 which is – to my best knowledge – entirely new. In short, it is a system to increase the air friction of the balance wheel during the time, when the mainsprings are fully wound. The technical description by AM is as follows

"We call our system Aerodynamic Amplitude Stabilization, ADAS for short. The basis of this is formed by a highly complex control cam as well as four air-trapping arms attached to the balance wheel. It works like this: when the movement is fully wound, thus exhibiting great amplitude, a lever controlled by the control cam is moved as close to 0.01 mm toward the balance. The air congestion that is thus created around the arms of the balance wheel brake it somewhat, and amplitude is decreased. The control cam, which is positioned axially in relation to the core, now releases the balance ever more as the mainspring loses its tension. The result is that the balance retains even amplitude for a longer period. The control cam is guided by the power reserve display in order to guarantee that the cam's position always corresponds to the state of the mainspring."

Isn't this an interesting approach to amplitude stabilization? I certainly thought so. The following drawing shows how the system operates.

Testing revealed, the system brings the biggest improvement during the first day, where amplitude is typically far away from its optimum, and continues to show improved results for another three days. From day 4 to 6, the amplitude is about the same as without the system.

The AM 39.001 features an indirect gear train. When the mainspring unwinds, it can happen that the gliding is not always smooth and results in the creation of short energy impulses that can lead to amplitude and rate deviations. Thus, the energy transmission of Caliber AM 39.001 does not take place as in conventional movements, where energy goes from the spring barrel to the center wheel pinion, but rather via a separate gear wheel that removes the energy impulses that can occur and allows more homogenous transfer of energy.

Another modification is to be found in the toothing. AM has chosen not to use a standardized tooth shape as has been in regular use for dozens of years. Instead, they have developed their own tooth shape.  Martin Braun explains the reason as follows:

"An approximated shape such as the NIHS toothing contains a few disadvantages like sensitive distance to the stems, torque fluctuation and missing interchangeable wheel characteristics. Thus, we have created our own tooth shape, so-called cyclovent toothing, which unites the advantages of a cycloid and involute toothing. In cooperation with Azurea SA, first-class gear wheels are now the order of the day in Caliber AM 39.001, and they including sinks (a prerequisite of the Seal of Geneva), pinion leafing, and polished bearing pivots. The effectiveness of these added element was easily established with the precalculated result of the energy yield. This toothing functions just as effectively as cycloid toothing, but transmits much more torque and will be able to be used much more effectively for further future developments.  NIHS toothing has an effectivity of 90 percent, while our cyclovent toothing reaches 95 percent." 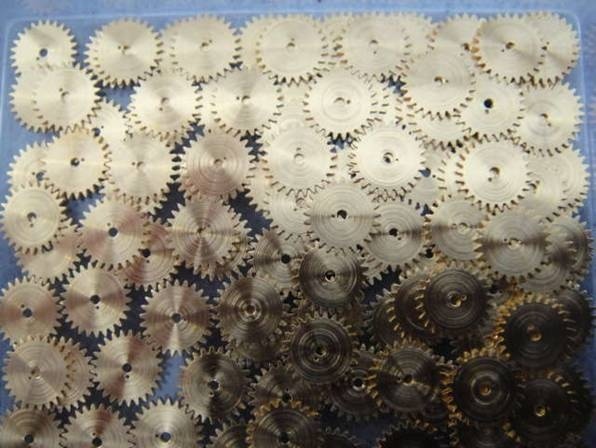 Brass wheels, manufactured especially for the AM 39 calibre 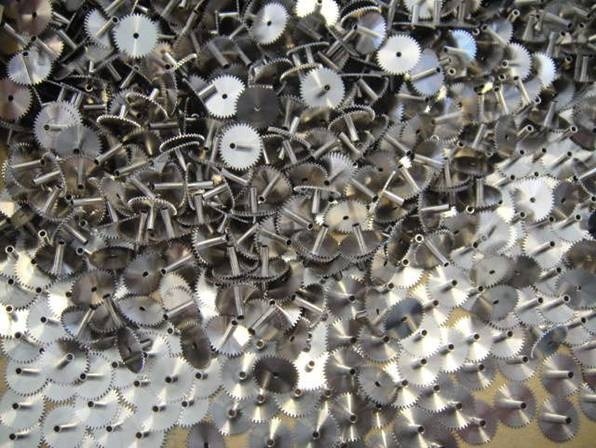 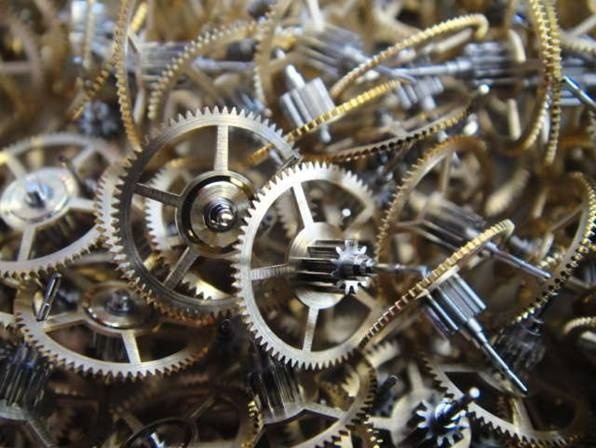 The perpetual calendar within Caliber AM 39.001 is classic in design. All date displays are individually settable and adjustable and the hands may be turned backward past midnight without causing any damage.

A very interesting detail is to be found in the pawls used in the perpetual calendar and large date mechanism. The „ruby pawls" are actually outfitted with silicium triangles which have the same function as jewels – reducing the friction. This leads to a more precise  and lower friction perpetual calendar mechanism, which in turn has less influence on the movement when it advances its displays. 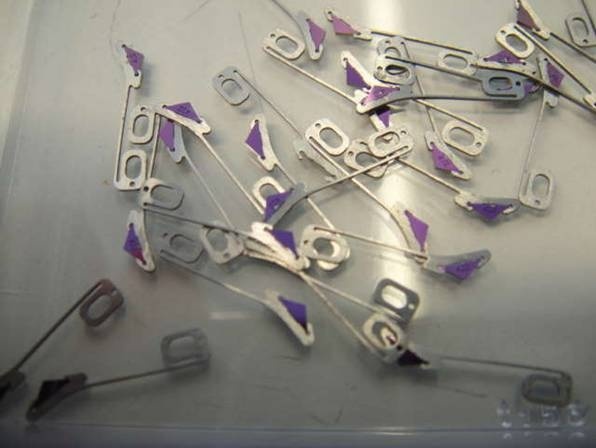 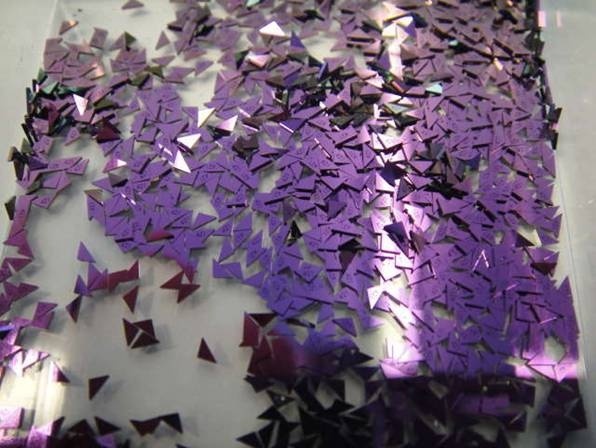 The silicium triangles before setting 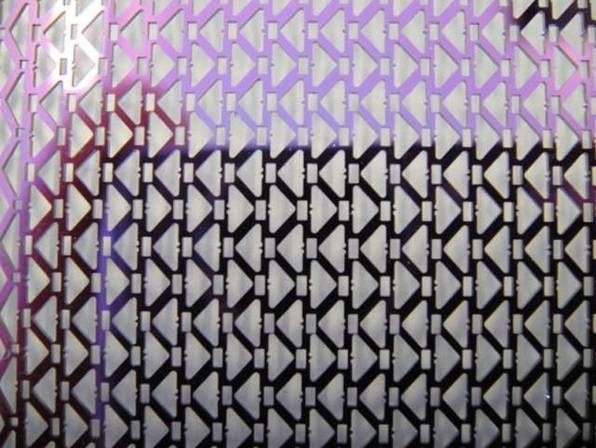 Detail of the respective silicium waver

Antoine Martin, Part 2: The Caliber AM 39

By: nitediver : September 5th, 2012-07:35
Antoine Martin Part 2: The Caliber AM 39 It gets a bit technical now.but I truly believe it is worthwhile to spend some time on the technical features of the Cal. 39. The concepts of the caliber 39 have been developed by Martin Braun over many years. The...
login to reply

By: KIH : September 5th, 2012-12:59
... thanks for the technical explanation. Fascinating to hear what is inside and what is innovative, etc. Great read. Ken
login to reply

By: Marcus Hanke : September 6th, 2012-06:12
I consider Martin Braun's work to be much more consistent than many other new movements that were launched on the market with a big fuss. He makes use of new materials in a very straight manner, profiting from their positive properties whenever possible. ...
login to reply

Thanks for your comments Marcus,...

By: nitediver : September 6th, 2012-10:00
Thanks for your comments Marcus, that was certainly my impression of Martin Braun - very competent but modest as a person. Let me know if you happen to come to Switzerland. Best, Stefan On Thu, Sep 6, 2012 at 3:12 PM,
login to reply

By: elliot55 : September 6th, 2012-07:29
NiteDive - This is a great post. So insightful and awesome detail. I was curious if there was a picture of the finished piece. - Scott
login to reply

Hope you found the pictures...