A mechanical wristwatch has many different functional groups that are employed to fulfill different needs such as setting the time and keeping the movement clean and dry. The first major need is one that is often completely forgotten; it is the supply of motive power.  You wind your watch once a day, let's say, but it runs continuously.  The mission of the main spring is to store the power to run your watch. 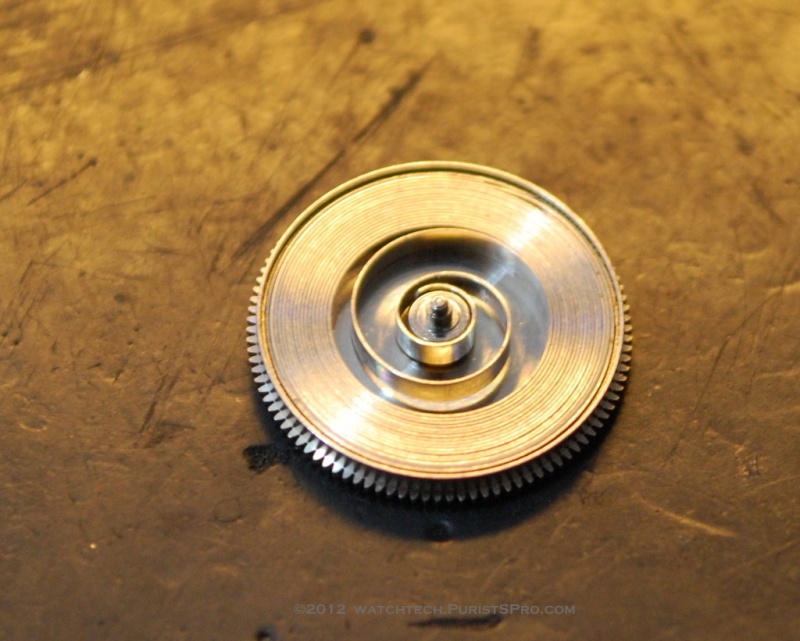 In a mechanical watch the power is stored in a steel spring.  Springs work through the capability of many materials, particularly metals, to reversibly change their form when a force is applied.  Reversibly means that when the force is removed the spring will go back to its initial shape.  Each material has its own particular characteristics concerning how easy it is to deform, known as the elastic module (E), and how much stress it will take before it will no longer return to the original shape, known as the elastic limit (?max). These two characteristics are very important in determining the optimum size and shape for a main spring.

Spring calculation is resumed as finding the best size and form for a barrel spring to be able to store the energy needed (let's say, the maximum energy possible in the space available for a long autonomy of the watch) while taking into account such other things as the number of turns of the barrel between fully wound and fully unwound and the maximum and minimum force produced.

The force of a simple straight spring is given by Hookes Law, named after the 17th century English physicist who first formulated it.  Simply stated Hookes law says that the force of a spring is proportional to the deflection multiplied by a constant factor depending on the material characteristics and the physical form of the spring.

The more you bend a spring the more it pushes back.  This law is a reasonable approximation for many materials as long as the elastic limit is not exceeded.   The spring constant depends on the material and the physical shape of the spring.

Let's try and get an idea of what is happening inside a spring as it is bent.  In the diagram below we can see a portion of a main spring in its relaxed state and when it is bent to a smaller diameter.  The length of the middle fiber of the spring is the same (?0·r0=?1·r1).  When bent the length at the inner and outer surfaces changes.  The middle fiber length remains the same, but as we move more and more to the surface the fibers get stretched (outside) or compressed (inside) more and more with the maximum change in dimension at the surface of the spring.  This change in length of a fiber is called the strain of the fiber.  The spring can be bent up to the elastic limit of the material.  The elastic limit is the strain after which the fiber will not return to its original form.  While we will bend the spring up to the elastic limit in order to store that maximum amount of energy, we will try to remain below the elastic limit of the spring as otherwise the spring will remain bent and not store the energy we need. 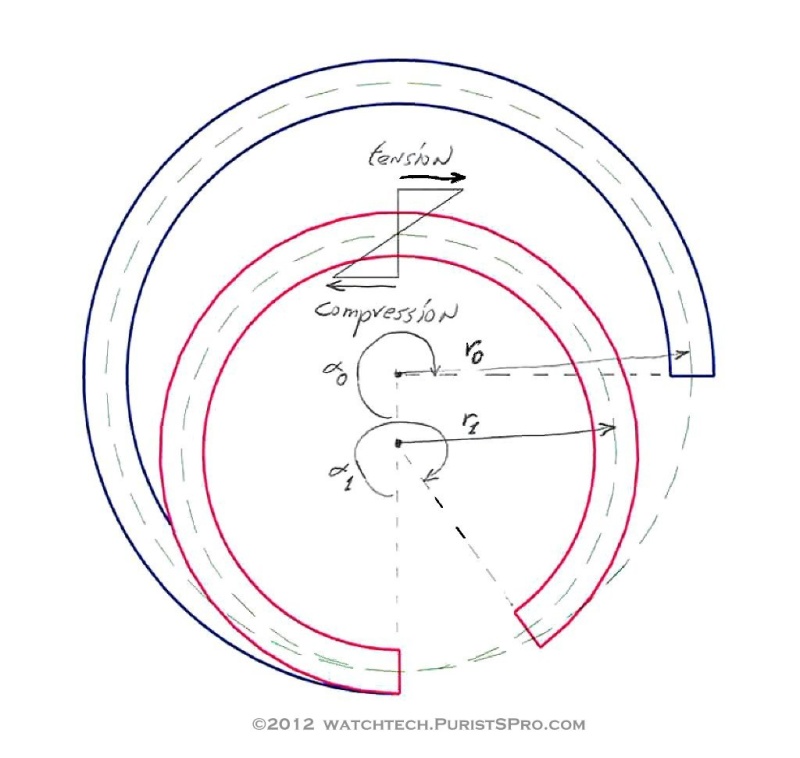 The moment of a barrel spring is given by the following formula:

As you can see the element with the greatest influence is the thickness of the spring as it goes into the calculation cubed.
The energy stored in the barrel spring is given by the following formula:

?max=elastic limit of the material

Here we see that the energy stored is proportional to e·h·L which is nothing other than the volume of the spring.  There is no way around it; to store more energy the volume of the spring will have to be greater, but we also see here the possibilities that new materials can offer.  If we find a material with a higher elastic limit this will greatly increase the stored energy as that goes into the calculation squared.  Thus the high interest in such materials as glassy metals at the moment.  These are metals that are solidified under special conditions to have an amorphous structure which gives them very special properties.  The first use of glassy metals in watchmaking (that I know of), however, is in the applied numbers and indexes on some dials because of their wonderful properties for polishing, not because they make good springs. 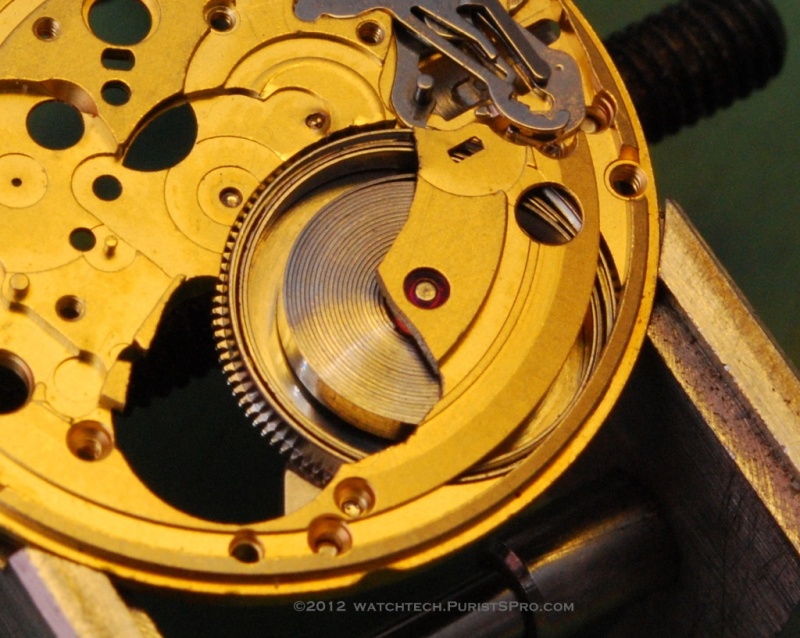 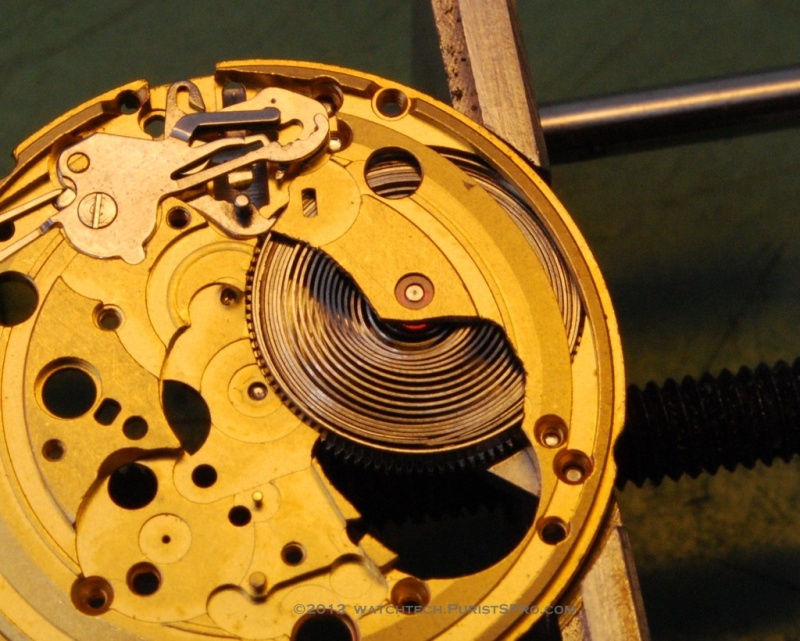 When the spring is completely run down it fills the space at the outer rim of the barrel.  As the outer rim has a greater diameter the spring needs less turns for its entire length, in the picture below we can count 15 turns.  This difference 22-15=7 is the number of turns that the barrel makes when unwinding. 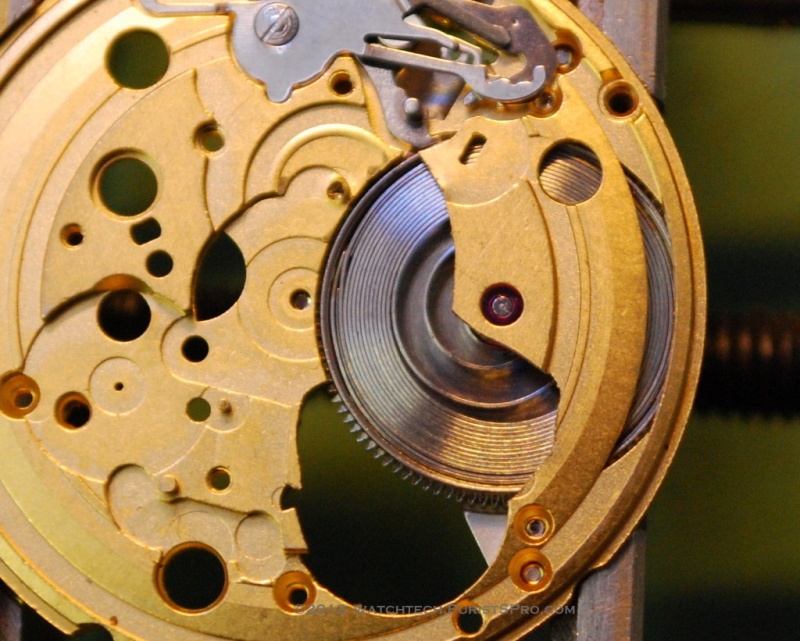 As we have decided to not exceed the elastic limit of the spring material the force increases linearly as the barrel is wound until it reaches its maximum when the spring is tightly wound.
Below is a graph of the torque curve of a barrel spring.  This is the torque curve of a 2824-2 barrel that I measured when starting out my tourbillon project.  At 7.2 turns of the barrel we see the maximum torque.  As this is a spring for an automatic watch it has a bridle that slips when the spring is fully wound and one continues winding.   Main springs are usually identified by their force when fully wound.  The mainspring for an ETA 2824-2 is, for example, a 1300 g·mm (gram · millimeter) spring. 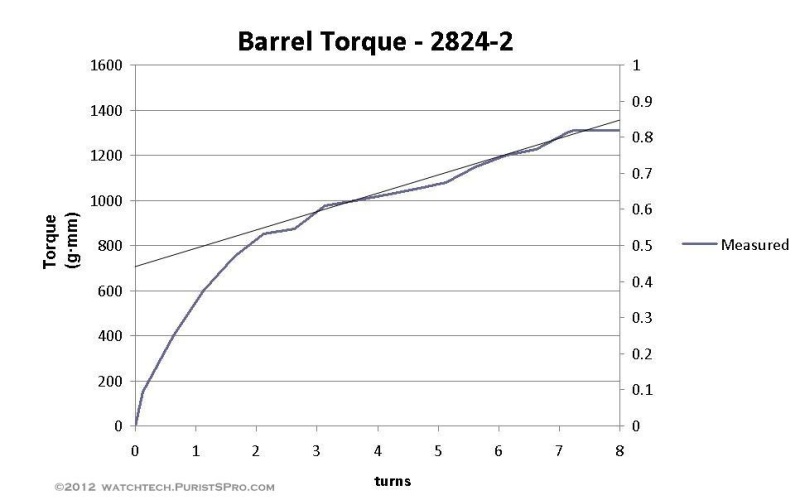 One needs a little more energy to wind a spring up than it can deliver when unwinding.  This is because of the barrel losses.  The loss of the barrel is mostly through friction; the friction of the coils rubbing against each other.  To reduce this modern springs are lightly coated with teflon or similar materials.  In earlier times springs were oiled, but this has the disadvantage that with the aging of the oils the coils can stick together, effectively reducing the useful length of the spring.  If the coils of the spring are not perfectly flat they can also rub on the top and bottom of the barrel.

Graphically the energy stored in the barrel is the area below the curve between the wound and unwound state.  For a barrel like the 2824-2 that makes about 0.3 Joule stored in the volume of the barrel or 1530 joules/liter.
Let's compare that to the energy stored in gasoline.  Gasoline contains about 9'700 watt hours per liter which makes 35Mega joules/liter.  We would only need about 116’666’666 watch springs to store the same energy as one liter of gasoline.

On the other hand the watch will run for about 40 hours on those 0.3 J of energy.  Let's compare that with a car, for example.  Assuming the average consumption of my Elise which is 6.3 liters/100km, the energy of the main spring is enough to run the car for 0.14 mm.   Say that slowly, fourteen hundredths of a millimeter.   A mechanical watch is really quite efficient, isn’t it?

Next installment; why do mainsprings have such a strange form when they are taken out of the barrel? 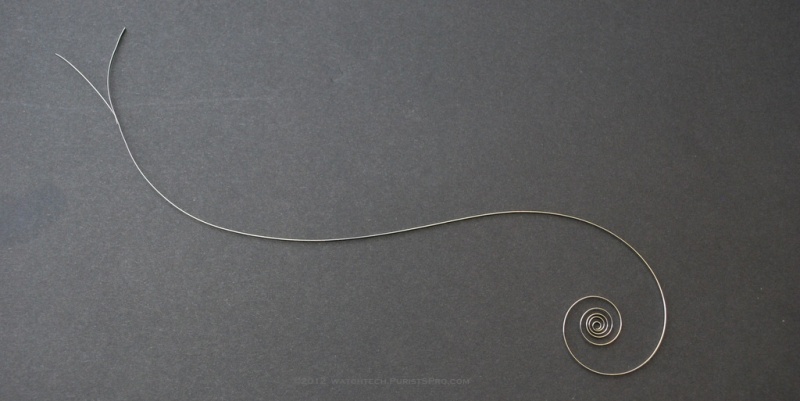 References:
For a more in depth treatment of these topics I am aware of two sources:

These references are both in French.  If you know of others and in other languages, please let me know.

By: DonCorson : September 20th, 2012-11:21
WatchTech 101.1 - Motive Power A mechanical wristwatch has many different functional groups that are employed to fulfill different needs such as setting the time and keeping the movement clean and dry. The first major need is one that is often completely ...
login to reply

By: DonCorson : September 25th, 2012-11:29
I am planning to work my way through all the parts of a watch including a little theory and visits to specialised manufacturers. Looking at all the constituant parts so we can better appreciate the whole. Starting out by learning more than you would like ...
login to reply

By: cazalea : September 25th, 2012-17:41
if so, I would have a bit more skin on one of mine. It was an 8-day spring, but still - amazing amount of power can be stored. Thanks for taking on this enormous challenge. Cazalea
login to reply

By: mkvc : September 25th, 2012-19:06
You have achieved the perfect balance of technical completeness and comprehensibility.
login to reply

By: BDLJ : September 26th, 2012-04:00
Really enjoyed your post. Great work in laying out the fundamentals, really enjoy good technical writing. Looking forward to 101.2...3...4... In the interim, do you have any more force v turn graphs? They're quite rare and rather difficult for the neophyt...
login to reply

Yes, but remember that with Omega...