Zenith's new case material ceramised aluminium makes its entry into its mainstream collection with two new powerfully designed 'chiaroscuro' (bright and dark, as Zenitih's italian-born PR manager told me) versions of the El Primero 36'000 VPH - I call them the Panda-Twins: 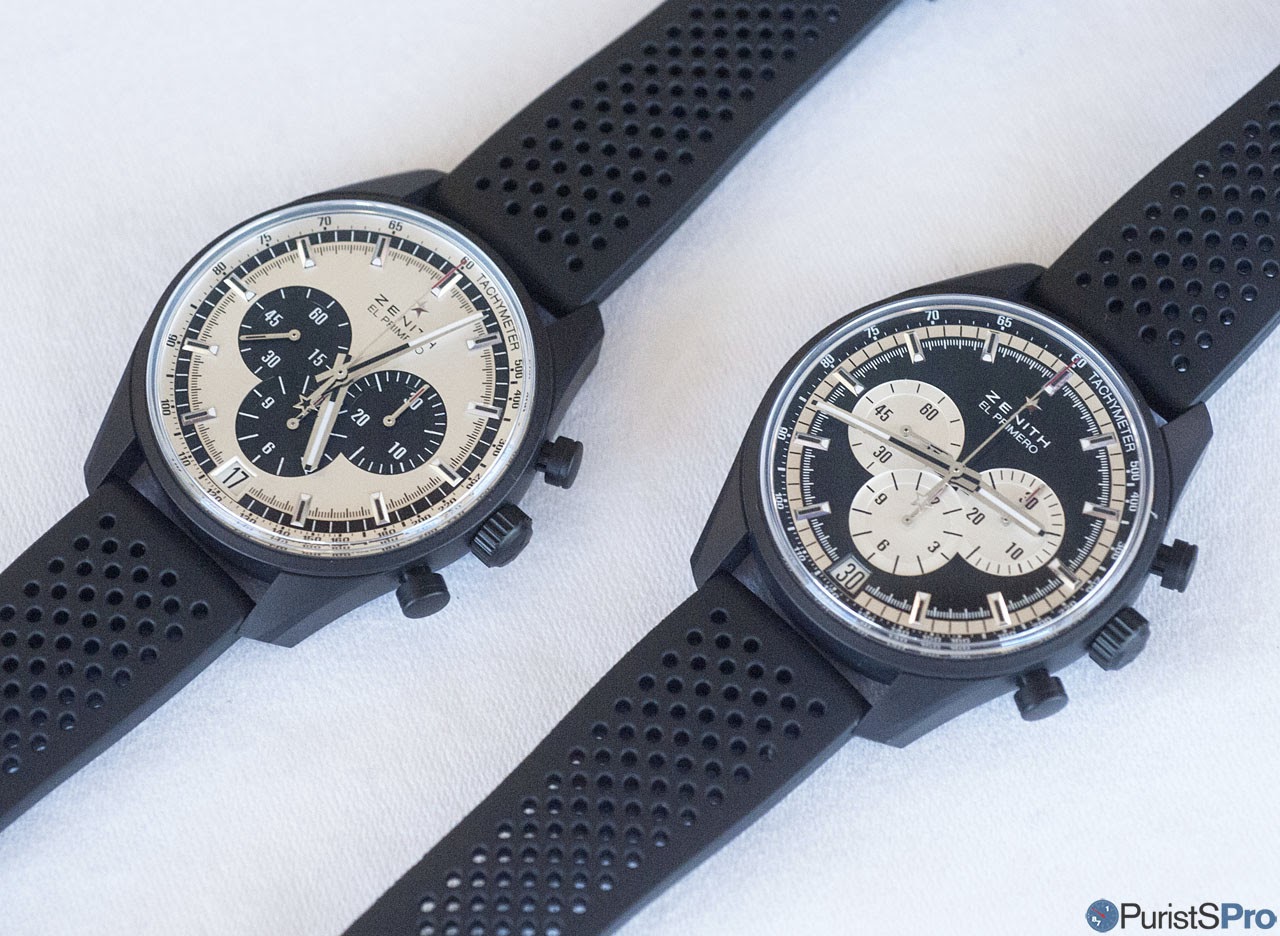 Both watches come with a 42mm case in intense black ceramicised aluminium and a perforated rubbers strap, fastened with a DLC-coated black titanium deployant clasp. The salient feature of these two watches is the intense contrast between the matte black case and the dials, coming in two versions with either silver on black or vice-versa. This dark/light theme has accompanied the El Primero since its presentation in 1969. 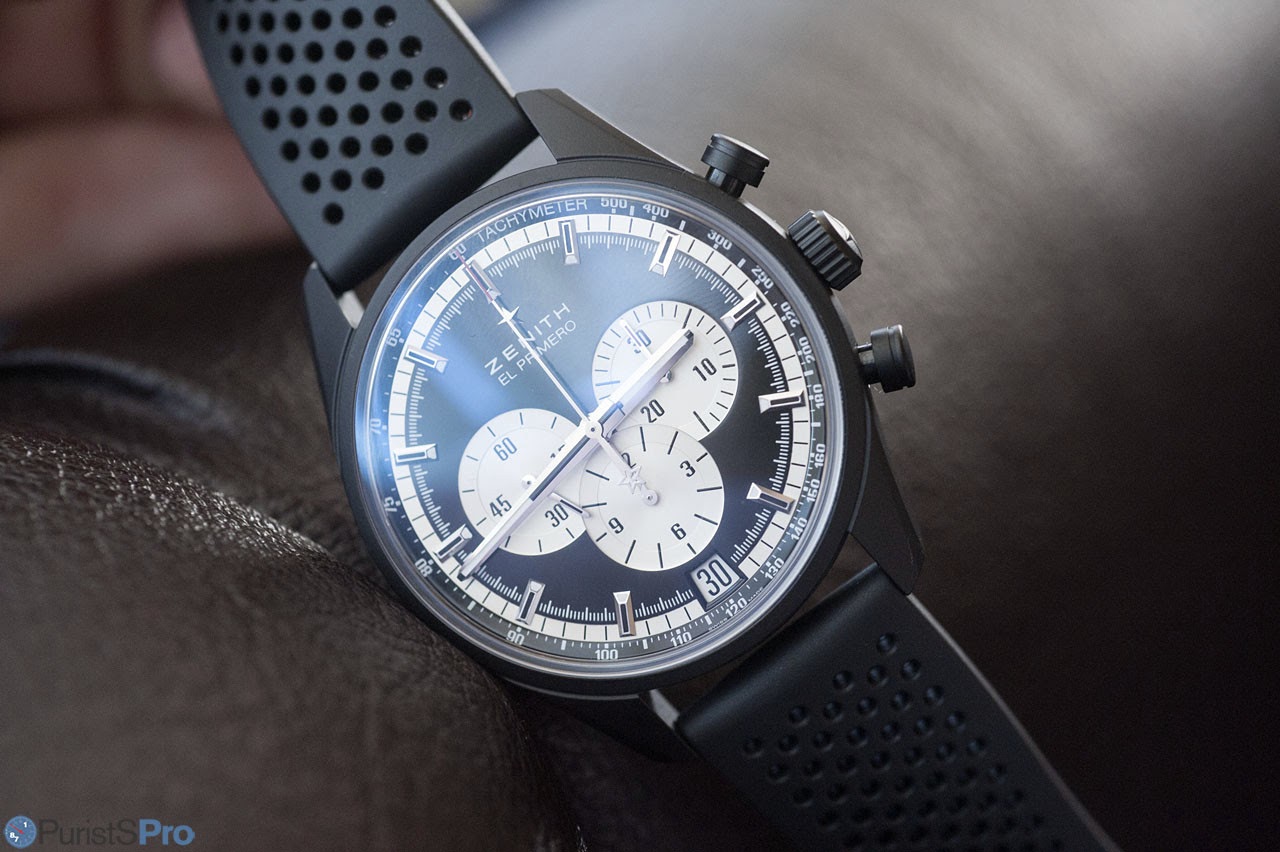 The punkiest of the two, and the most ostentatious as well. Black, black, and another detail in black! 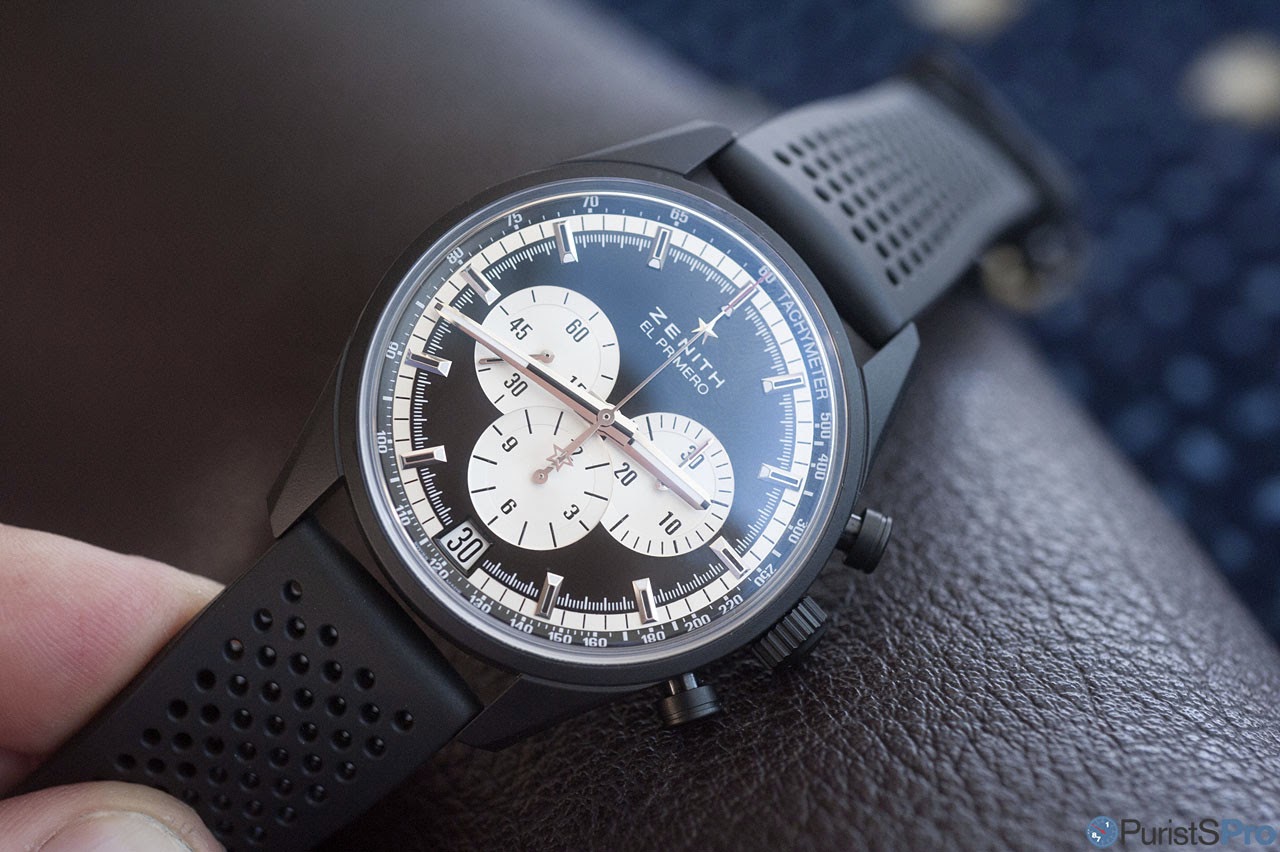 Alsthough the light on Zenith's boat was not entirely bad, quite good compared to Basel actually, I did not quite manage to capture the true nature of the dial design. Even the black dial base is finely sunray-patterned and of ebony colour, and the light accents are brushed silver.

I do not want to go too much into the discussion of the dial, as this might still change *). But one lovely (and quite minuscule) detail I'd like to highlight: the colour accents of the subdial hands: black inlays for the permanent seconds hand, red ones for the chronograph indications - just like the central seconds counter! A nod to functionality, as one would expect from a chronograph specialist. 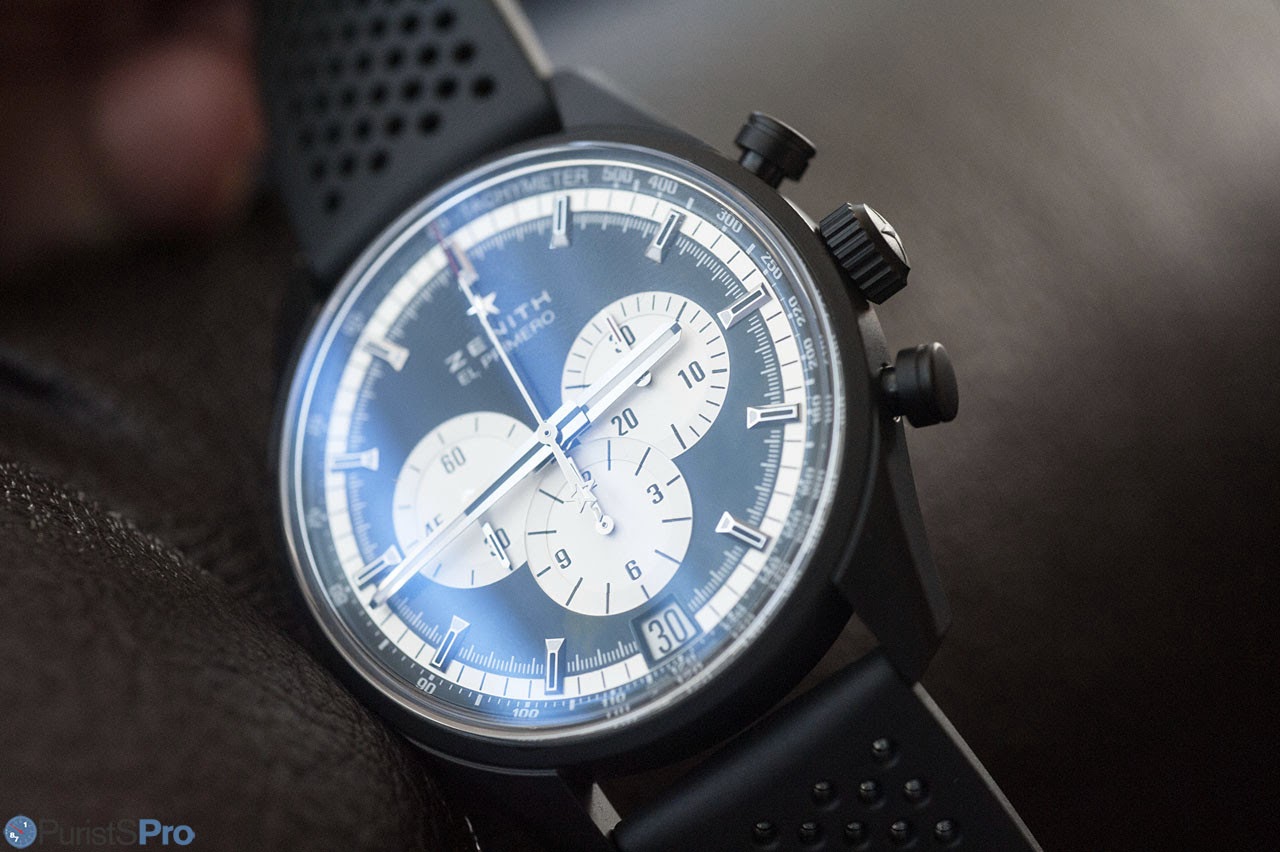 Engine is the venerable El Primero Cal. 400B, which is basically the original version. 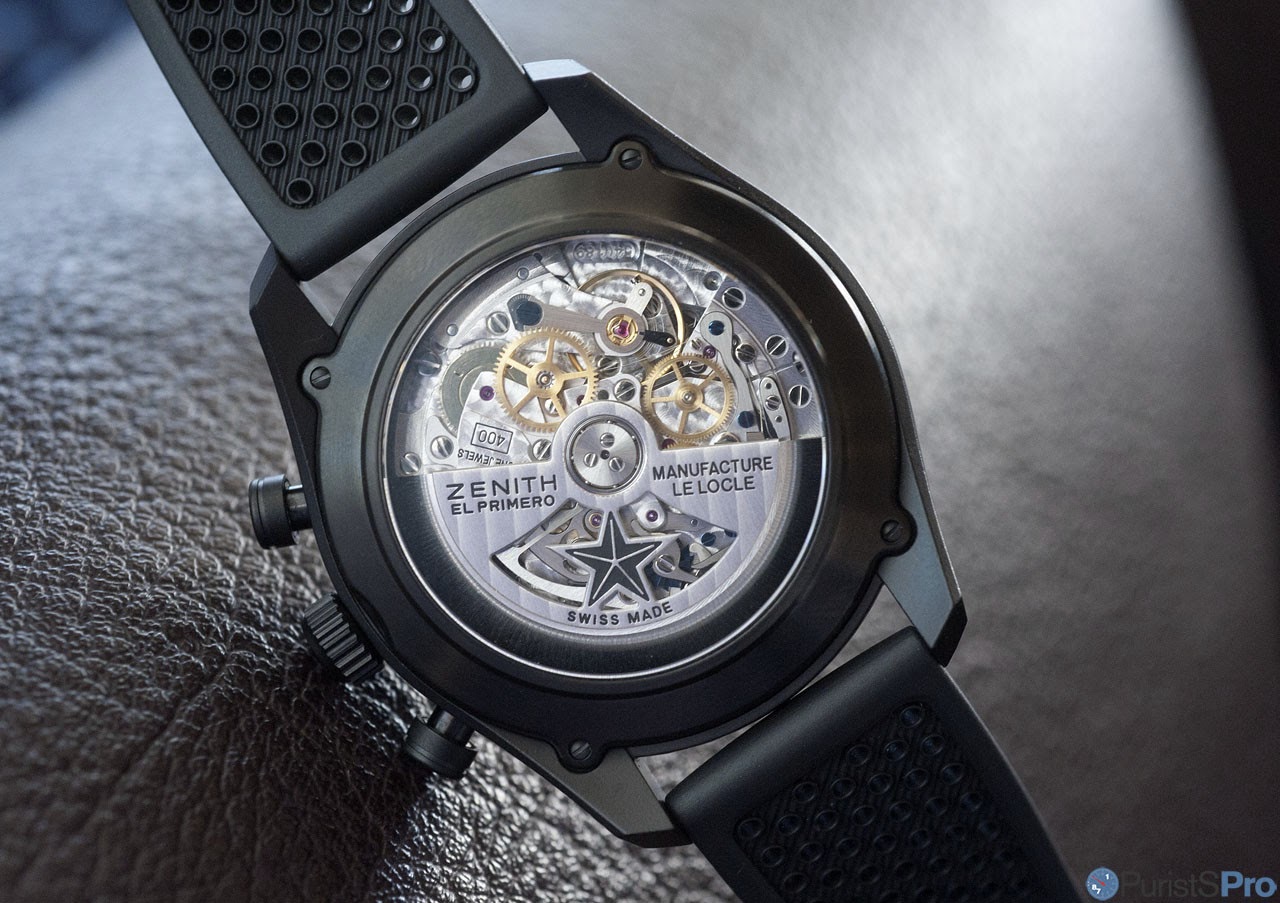 A couple of wrist shots to show its presence. With the given light it looks a bit too simple, just black and white. But certainly, there is more to it! 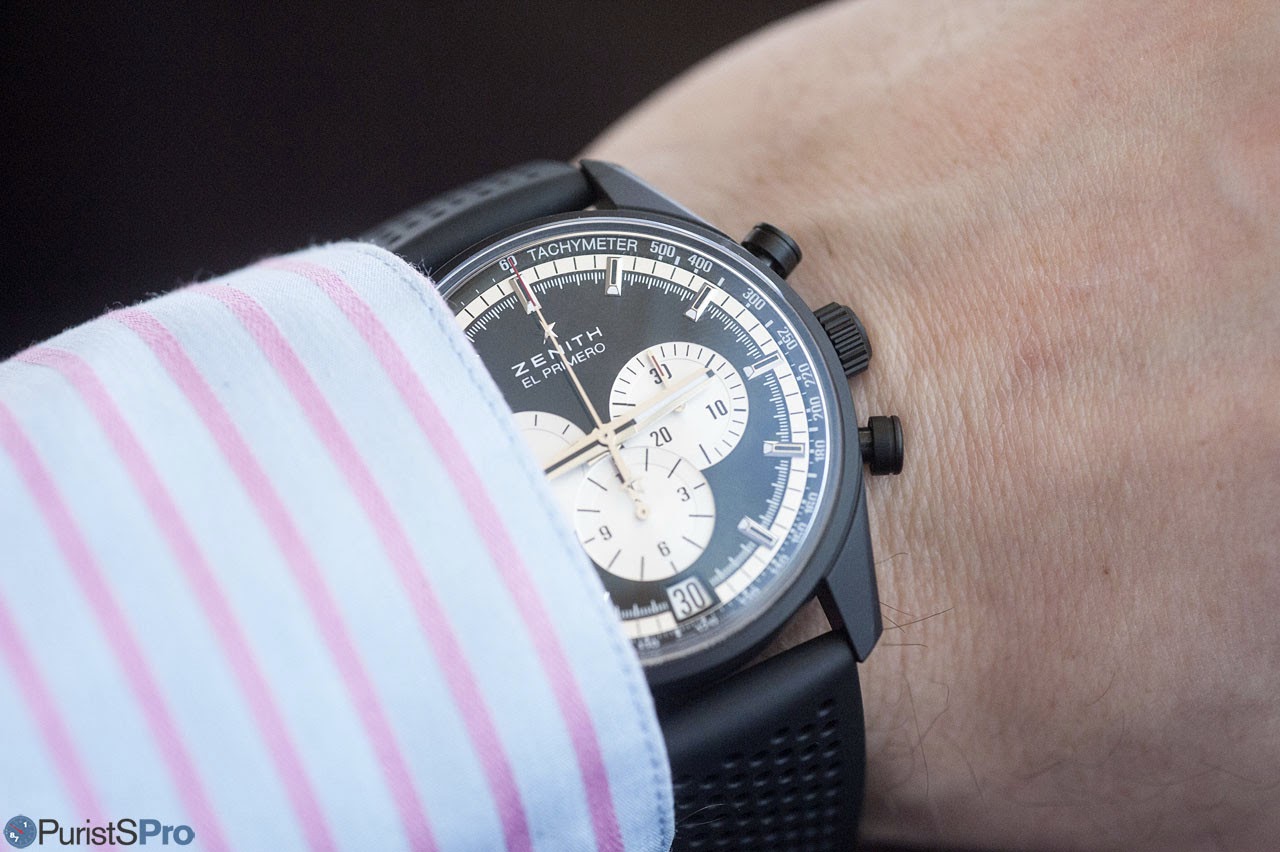 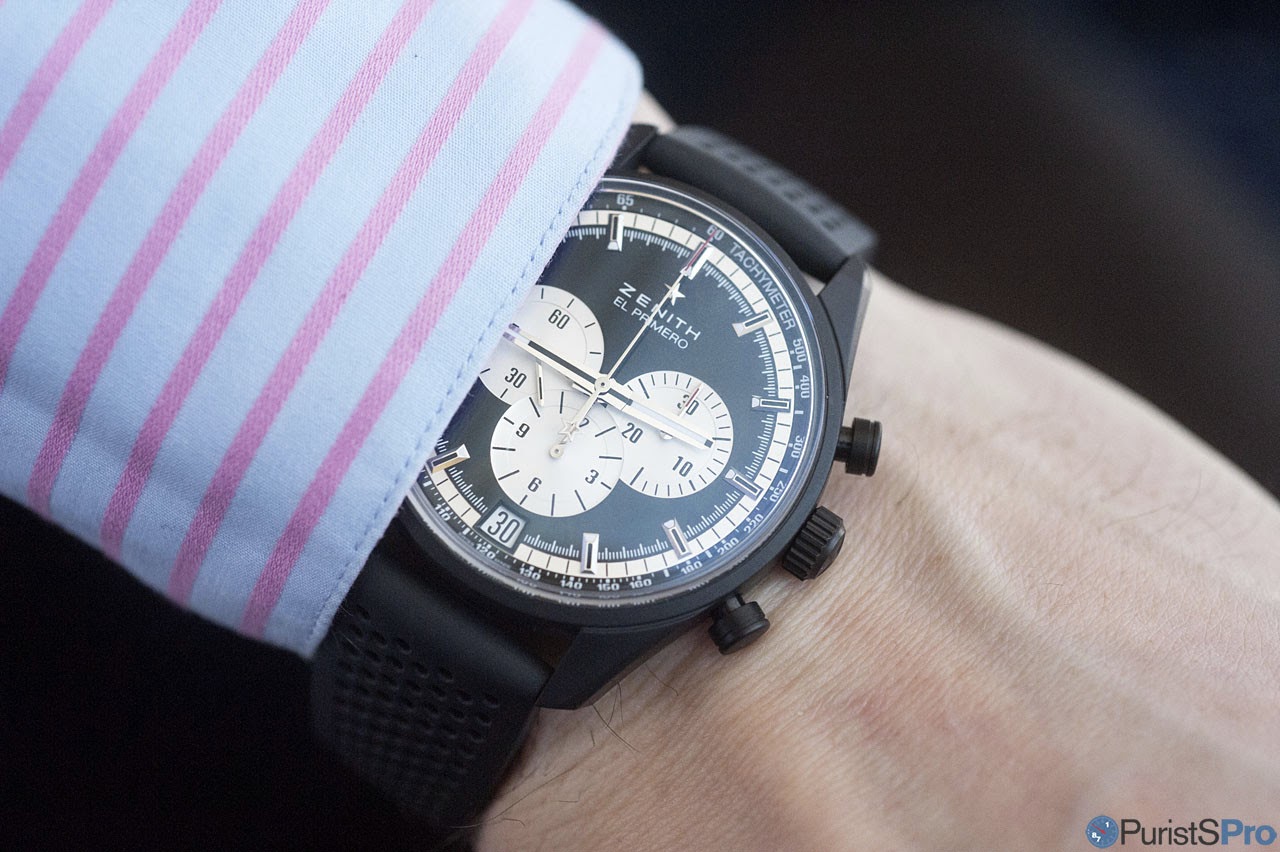 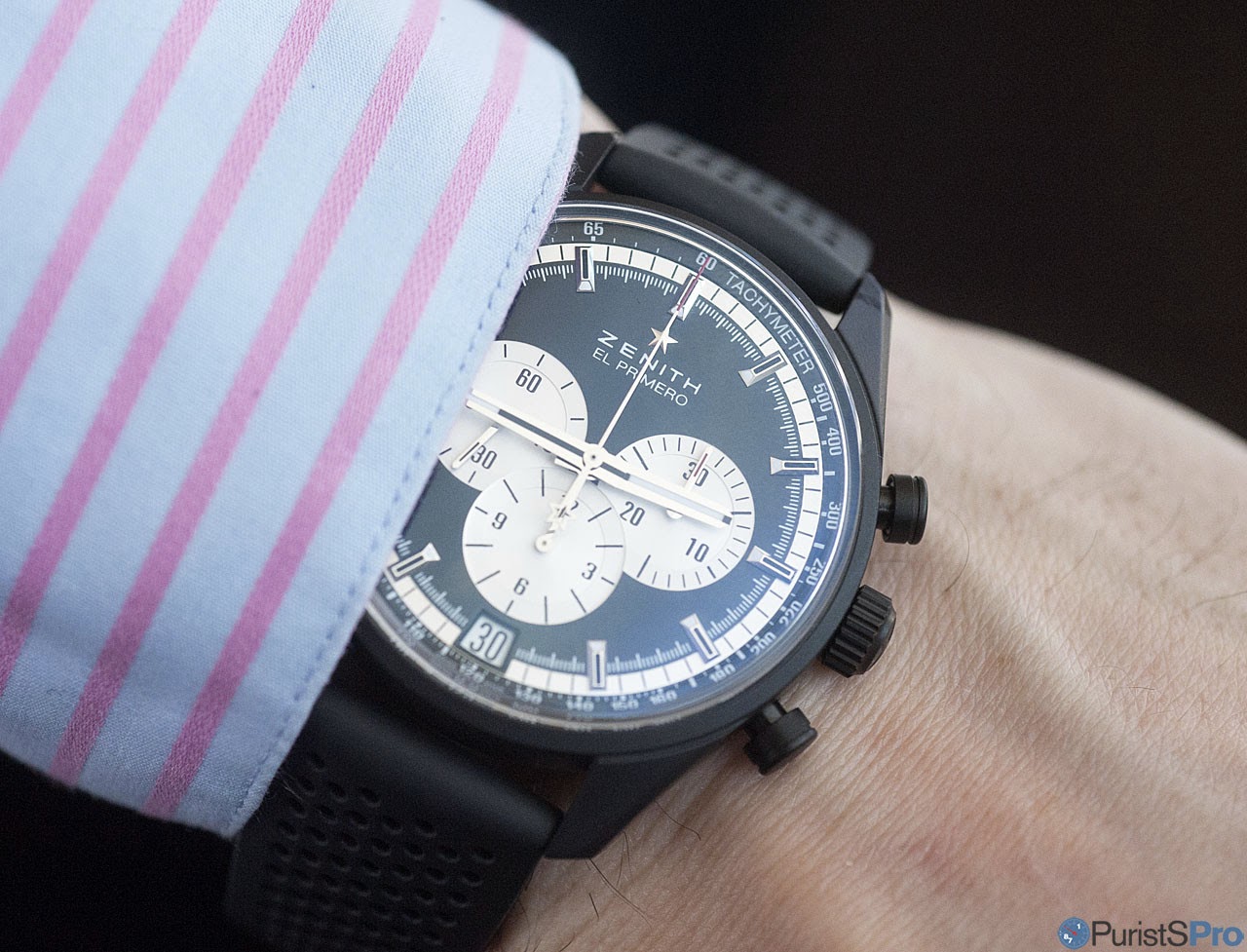 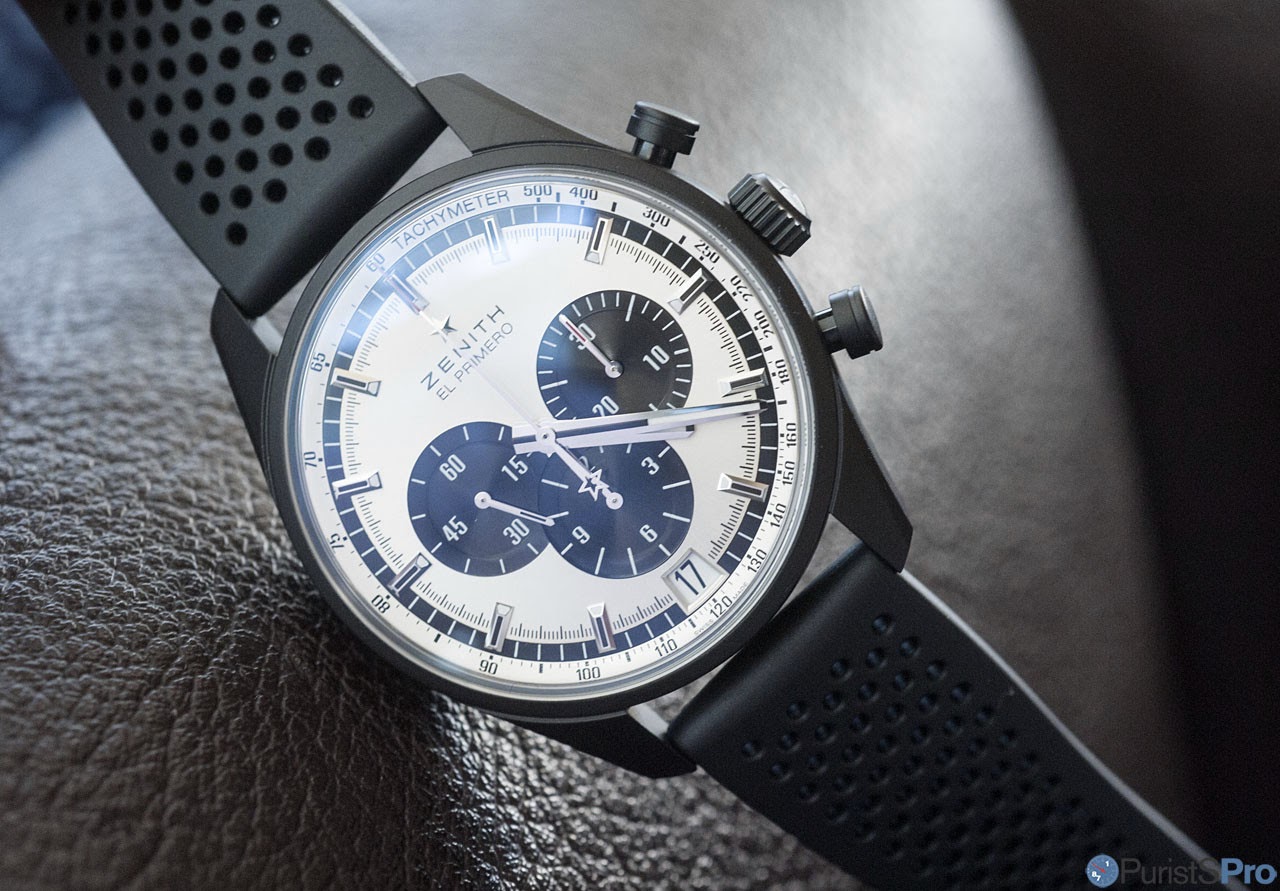 the overall impression on me is that this one is a bit more 'friendly', approchable if you like, than the white on black sister watch. 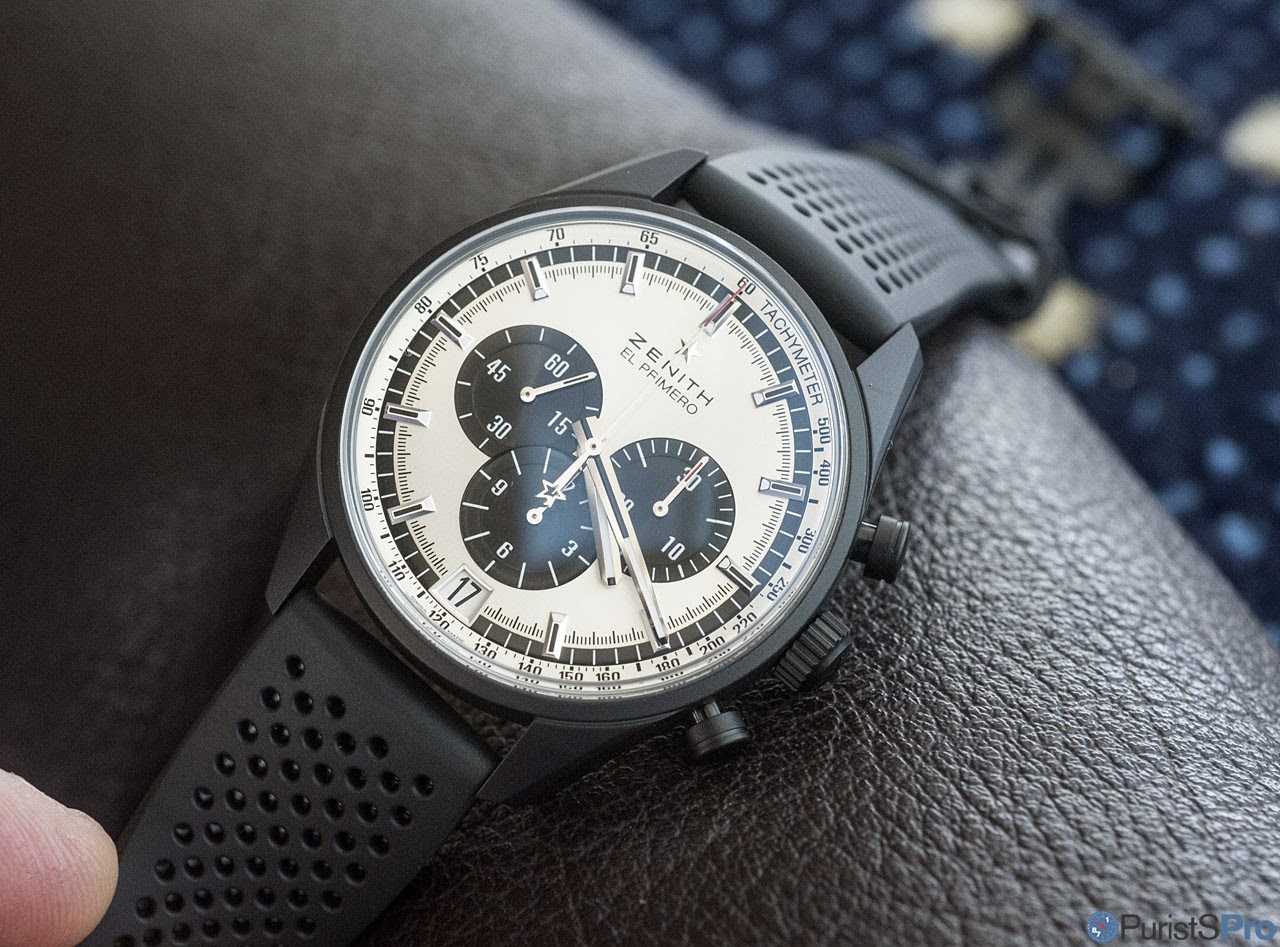 One indication might be this wrist shot: the sunray finishing just stands ou bettert and, being silver, lends a tiny bit more depth to the dial and emphasises its structure. 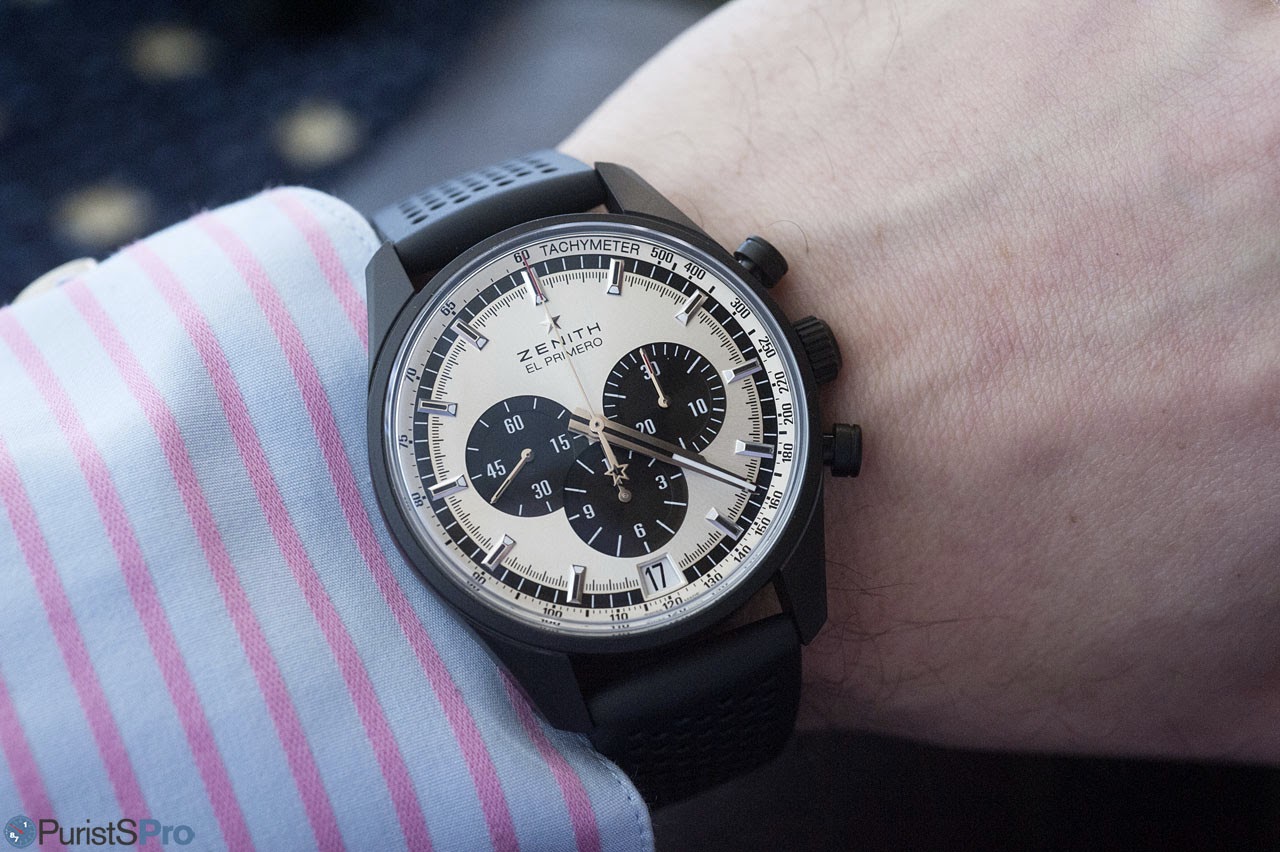 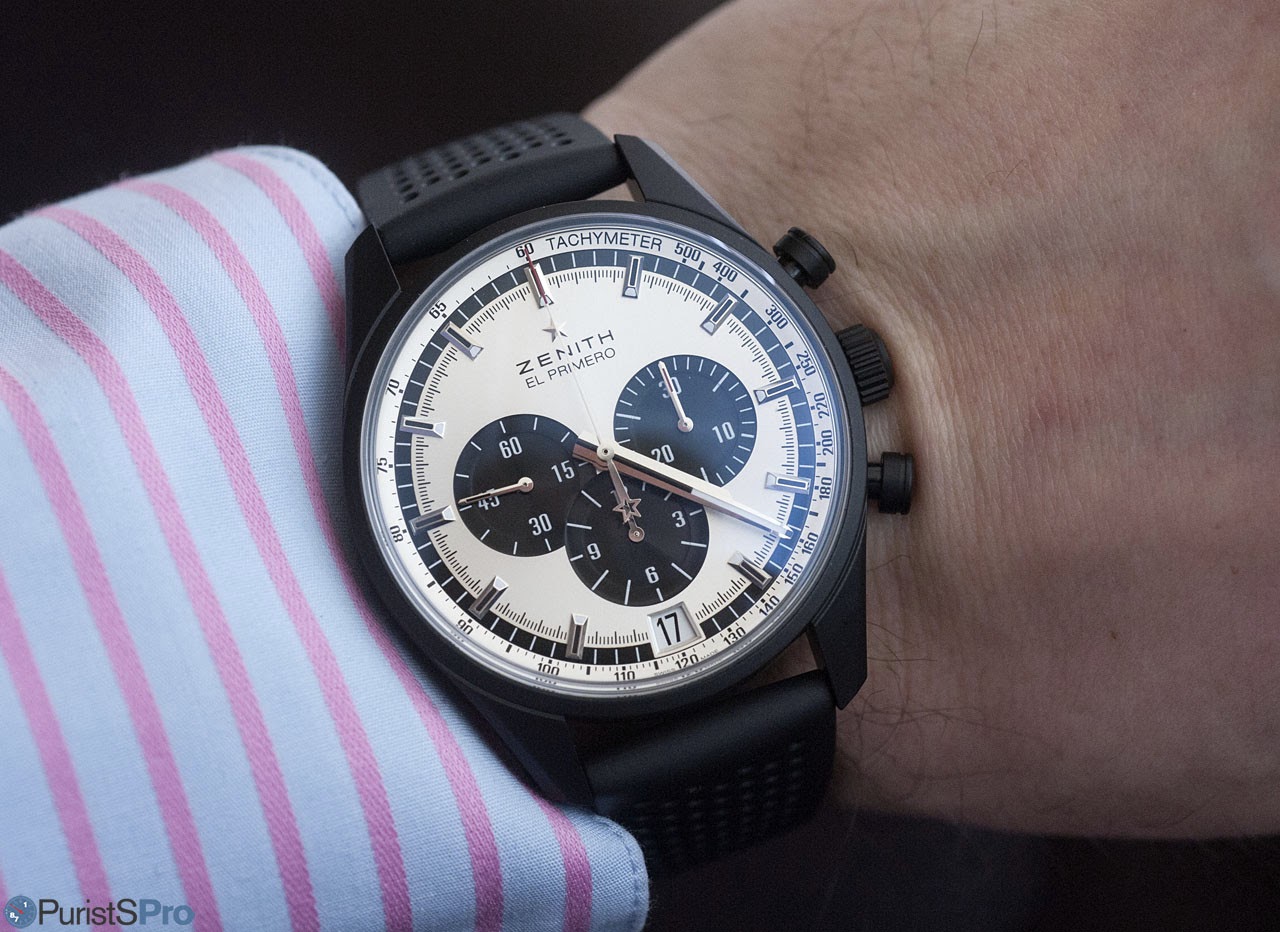 Which one do you prefer?

*) Postscriptum: During my discussions with Jean-Claude Biver in Geneva (and also in personal communications with other Purists

), the new (interim) CEO of Zenith made it clear that the time of overlapping (at least to the extend that functionality is compromised) is over. Thus, the watches I am showing you here might not see the day in Basel, or at least not in this particular design. Thus enjoy it why it lasts ;-)
Mr Biver listens very carefully and is really determined to rise Zenith to a level where it belongs. Great times ahead!

Delighted to read the postscript below

By: ifraher : January 22nd, 2017-03:38
That design has hindered many an otherwise successful watch design. If the could release both of these 'minutes first or take the actual sub dial diameter down slightly like the range rover reference they would solve a major gripe of owners, prospective c...
login to reply

The Range Rover edition is I think a very, very attractive implementation...

By: iadxb : January 22nd, 2017-03:57
But in reality I wouldn't go for either, I like my Zeniths a but more colorful. I would be curious to know more about ceramicized aluminum. From end user perspective, how does it compare to cases coated with DLC or made of standard ceramics?
login to reply

Good question! From what I know, the ceramicisation process lends surfrace strength and resilience...

By: Ornatus-Mundi : January 23rd, 2017-03:39
to the otherwise rather soft aluminium. Excellent question, I shall inquire! Magnus
login to reply

Difficult to choose between the two -- can't wait to see them in the metal!

For me: black on silver, but I would love to see the other under different lightning conditions first! [nt]

By: Ares501 - Mr Green : January 22nd, 2017-04:29
but that's not a news coming from you Looks like interesting times are ahead for us Zenith fans From these two very handsome watches I would go for black on white Cheers D
login to reply

Thanks for the report

By: crown comfort : January 22nd, 2017-05:47
initially, I was a bit concerned that those two new models are an outlook to the future, for me Zenith moving closer to the other LVMH brands, i.e. Tag and Hublot. But good to hear that this is not the case and that Zenith will go back to its DNA. Let's s...
login to reply

CC, I am absolutely sure that Zenith's future lies closer to its roots. We shall not forget...

Mickey Mouse Zeniths are so wrong

By: MTF : January 22nd, 2017-09:40
Magnus, I am glad that overlapping dysfunctional dials will be verboten in future. To be pedantic, these Zenith are more like Mickey Mouse than Panda dials. Panda faces are more like the ones below.... Chopard Superfast Chrono Porsche 919 Jacky Ickx Editi...
login to reply

Chopard did the clever move of seeking a technical solution to the issue of overlapping subdials...

By: Ornatus-Mundi : January 23rd, 2017-03:46
in that they positioned the hours and minutes counter atop the central axis, similar to a quartz chronograph movement. That way, the movement could be realised with a reasonably small diameter yet still avoiding overlapping subdials even in larger watches...
login to reply

White dial for me!

By: massi. : January 22nd, 2017-09:51
What you wrote in the postscriptum is really great news! However, the large diameter of the case makes the counters too close at the center: something that aesthetically disturbing the whole... This great house deserves a bright future, and above all, fai...
login to reply

The postscript is music to my ears

By: logan2z : January 22nd, 2017-11:37
And not Mickey Mouse ears The overlapping subdials have ruined many Zenith watches for me, as has the subdials being too close to the center of the dial. I'm hoping that both issues are rectified by a newly developed chronograph movement that better suits...
login to reply

White dial for me! Looks more unusual and panda like :)

I have a lot of respect for Zenith

i think these are a step in the right direction

By: keks : January 23rd, 2017-04:44
I would like to think the future lies ahead for Z and sincerely hope JCB finds a CEO to take the brand where it belongs to be. It has tremendous amount of potential and no real reasons for not getting there. Exciting times ahead I hope for.
login to reply

'It has tremendous amount of potential and no real reasons for not getting there'... YUP! [nt]

Thanks for your postscriptum....

By: stere : January 24th, 2017-04:53
...this is the message I've been waiting for long. I had a little chat with JCB a couple of days ago about the same topic and he promised to solve the problem. As you see at Zenith Stratos: overlapped subdials but on the Stratos rainbow everything is fine...
login to reply