Aug 29, 2021,11:11 AM
The Patek Philippe boutique in Rome has quickly become one of the most popular locations on Via Condotti since its opening in 2019. Located on the former site of the Hausmann multi-brand boutique, it is of course managed by the retailer's team. The reception on the ground floor gives access to the lift to the seventh heaven... in fact the first floor, which includes the shop windows, the points of sale and the watchmaker's workshop.  2019 was not just any year. It was also the 225th anniversary of Hausmann's presence in the Italian capital. To celebrate this anniversary and the opening of the boutique, Patek Philippe presented a limited series of the Calatrava 5296 available in 50 pieces per material (white gold or rose gold). 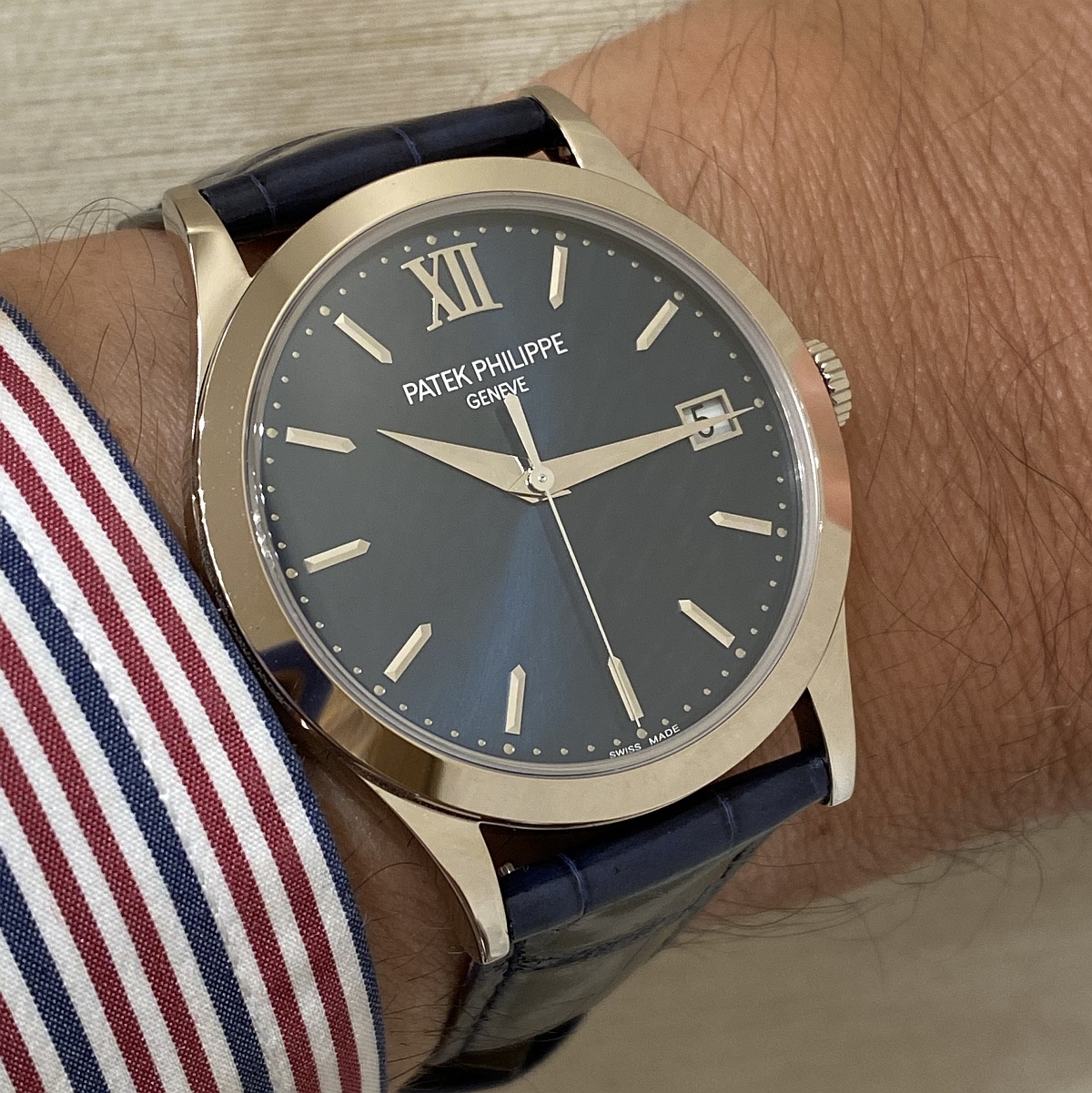 The choice of the Calatrava 5296 as the starting point for this limited series is not surprising. A few years ago, it was one of the basic models in the Calatrava collection and, with its 38mm diameter, offered a simple and elegant context, well in the spirit of the Eternal City. Moreover, this watch had already lent itself to the exercise of the dial transformation since a version that I would qualify as traditional with baton indexes and Dauphine hands cohabited with a version with a sector dial crossed by leaf hands (aiguilles "feuille"). Note that the reference 5296 is no longer in the catalogue, replaced from now on by the reference 5227 with a slightly larger diameter (39mm). 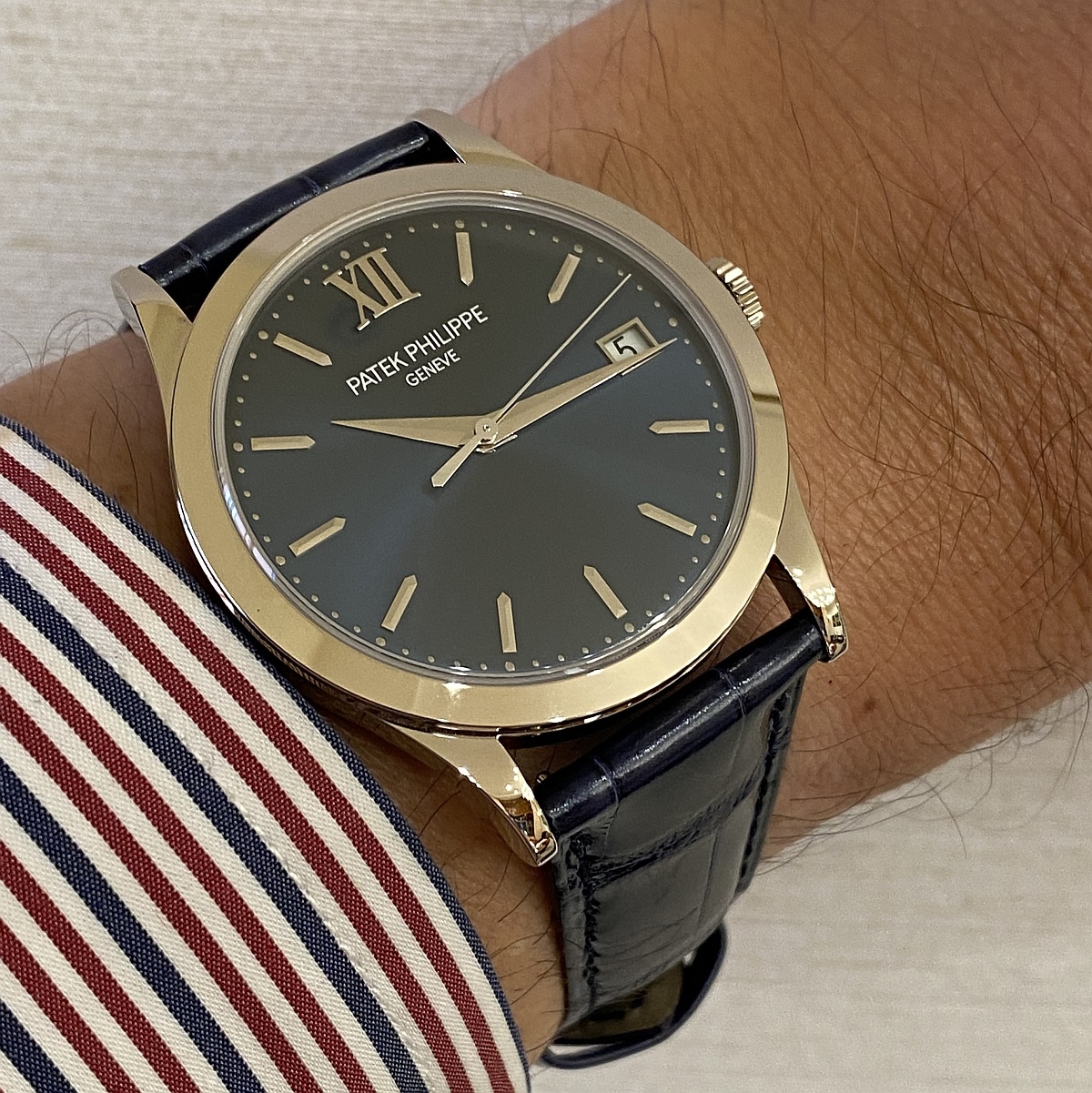 The 5296 Haussman limited series thus takes up this known framework: the case with a diameter of 38mm, a thickness of 8,5mm, the date at 3 o'clock and the well-known automatic movement 324 with central second having a frequency of 4hz for a power reserve of 45 hours.


The specificity of the limited series lies in 5 points:

The two versions have different atmospheres. The white gold version, because of its blue dial, seems to me more versatile. It is elegant but can also be worn in a casual context. The rose gold version is more refined in my opinion and the Roman numerals seem more appropriate in this context. In any case, the rendering of the slate dial is magnificent and goes perfectly with the case. The result is also convincing with the white gold version but less spectacular. Between these two versions, I thus preferred the pink gold version whose warmer side corresponds better to this nod to Rome. 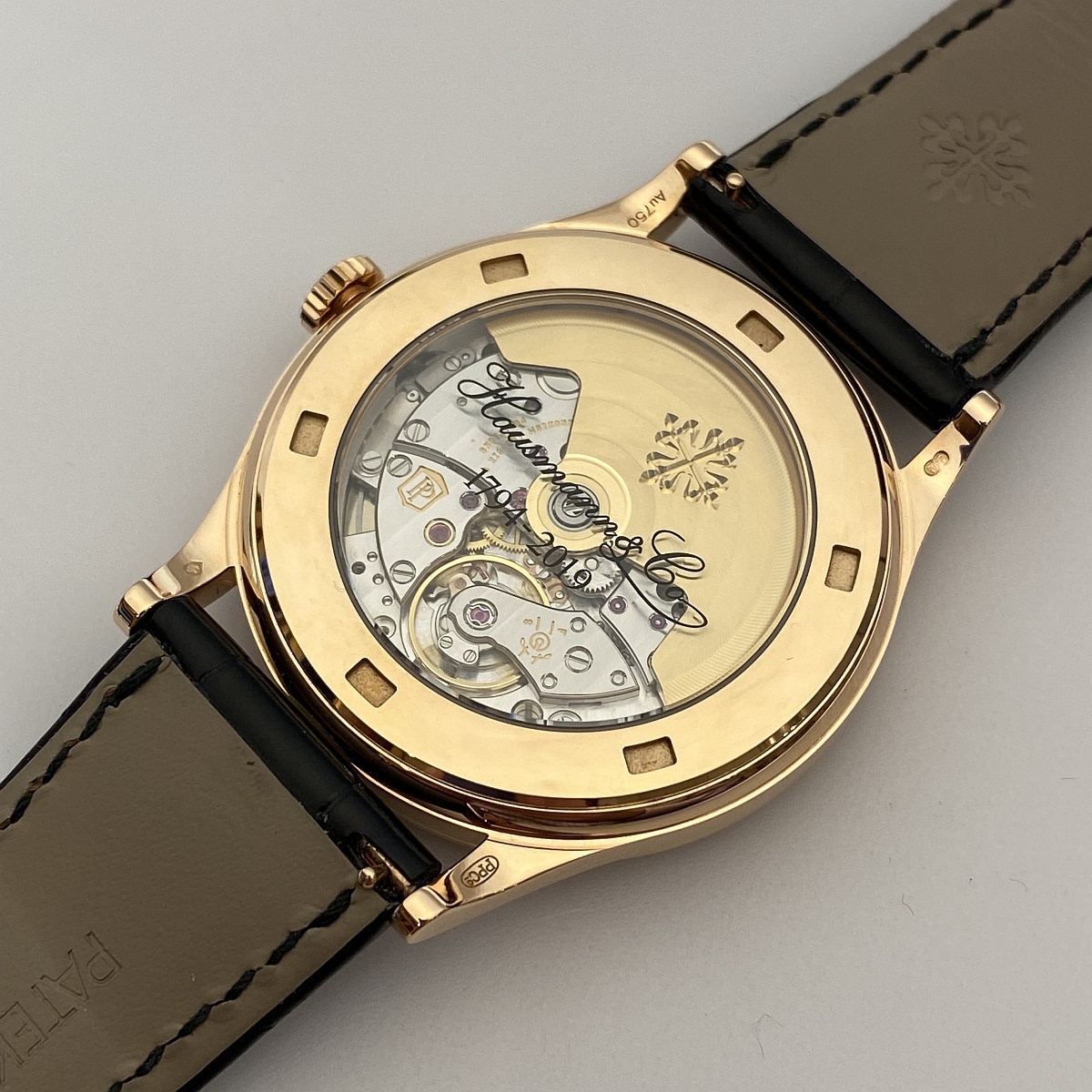 The 5296 Hausmann limited series is in any case a nice evolution of a very famous Patek Philippe model. The result remains very classic and without real surprise effect. It remains nevertheless attractive thanks to the old-fashioned charm that emerges. To tell the truth, I thought more about the Via Veneto and the stars of the golden age of Cinecitta while observing the two versions than about the contemporary fervour of the Via Condotti. The Roman numerals accentuate this sensation and I come to regret that Patek Philippe did not choose the option to remove the date window which would have allowed to go to the end of the concept. Also I would have preferred an officer's back rather than the inscription on the glass.

The rose gold version is my favourite: 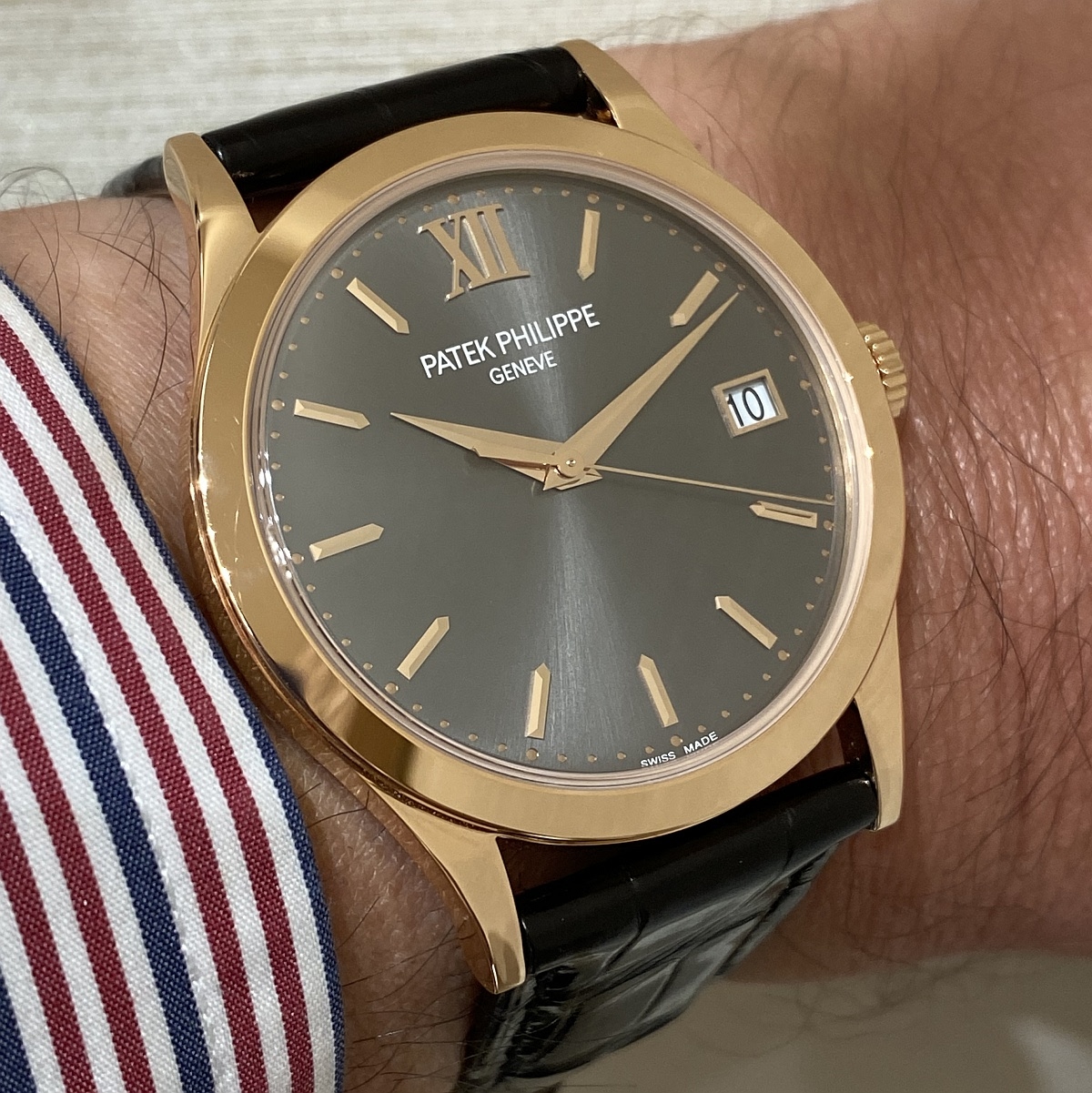 In any case, the 5296 Hausmann gives the possibility to still enjoy this old Calatrava reference and to access a limited series from Patek Philippe which is a great asset. But for those who are interested, then you have to be quick as there are hardly any pieces left available. 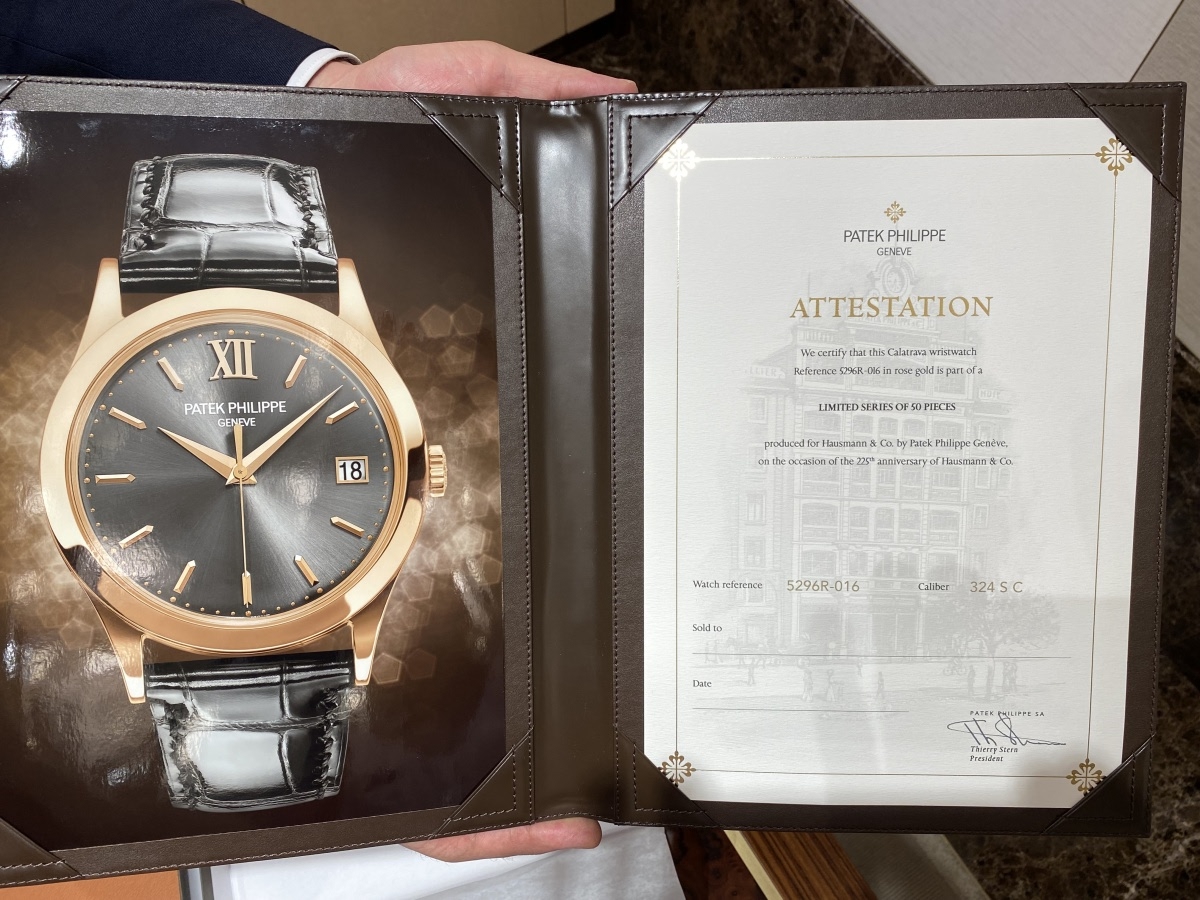 The selling price for each version is set at 36,000 euros including VAT.
Fr.Xavier

By: foversta : August 29th, 2021-11:11
The Patek Philippe boutique in Rome has quickly become one of the most popular locations on Via Condotti since its opening in 2019. Located on the former site of the Hausmann multi-brand boutique, it is of course managed by the retailer's team. The recept...
login to reply

Agreed but acceptable for a commemorative edition

Some Roman numeral had to be on the dial for the Hausmann edition...and XII was a most natural choice ;-)

Yep, that is for sure👍Plus ref. 5296 does come with a date…nothing wrong to remove it for aesthetic purposes, but technically, I think the reference number would have been a new one at that point😉👍

Then, I would maybe hav a different judgement. But as it is, no go for me.

👍Totally fine, we don’t all like the same pieces👍🥂

By: FabR : August 29th, 2021-17:14
In fact, the ones I LOVED the most here were the two pieces unique in enamel (featuring Piazza di Spagna e Castel Sant’Angelo), but alas, no way for me to receive one (they went to the Museum)😉Cheers.
login to reply

+1 ... I prefer the standard issue piece...and writing across a see-through case back is a big negative in my book.

It‘s for sure a fantastic watch but

By: MTR : August 29th, 2021-11:24
I can’t live with the Roman XII and on top the white date window disturbing this beautiful dial. Best Thomas
login to reply

The Roman numeral XII makes perfect sense given where the store is located !

By: GLau : August 29th, 2021-12:35
Whether collectors like this design is another issue. Personally I am quite like the “XII” because it differentiates this reference from the regular production in a “clever” way while paying homage to Rome. Between the blue and grey dials, I need to see t...
login to reply

Thanks for the live pics and the beautiful review FX! The Hausmann boutique deservedly received a number of special editions for their opening two years ago, which VERY interestingly also included these two *unique* enamel pieces...

These two pieces of art are…

They are! Just not meant for me, apparently, but for the Patek Museum..😄😇🙏

You would be the perfect

Don’t think this wasn’t one of the arguments I tried..😂🙏❤️

Oh, isn't it Castel Sant'Angelo! It was the setting for TOSCA, Puccini's wonderful opera.

By: anaroku : August 30th, 2021-01:27
That's what Patek does smartly. It ’s a pride that only the selected venerable dealers are allowed to do.
login to reply

Indeed, Piazza di Spagna and Castel Sant'Angelo are two of the most iconic symbols in the heart of Rome -- being dedicated two unique Rare Handcrafts with such special themes certainly does not happen to all ADs! ;-)

By: FabR : August 30th, 2021-01:58
I believe that not even my friends at Pisa (not the city but the family from Milano! ), the only other (and the first) Boutique in Italy, were bestowed upon some Rare Handcrafts on the occasion of their opening...though I know they were able to negotiate ...
login to reply

Great write up! Thank you for the pics!

Personally, I am not keen on the date window or XII

Thank you for the heads up.

I definitely remember the Hausmann boutique on Via Condotti.

By: patrick_y : August 29th, 2021-18:12
I remember almost buying a 5127G there over a decade ago. Kind of regret not having bought it. This limited edition is done well. While the dial might not be to everyone's tastes, the addition of the deployant buckle was a smart move. Hausmann has had a f...
login to reply