Montblanc SIHH 2014. A view on the Timewalker Chronograph 100 Limited Edition. 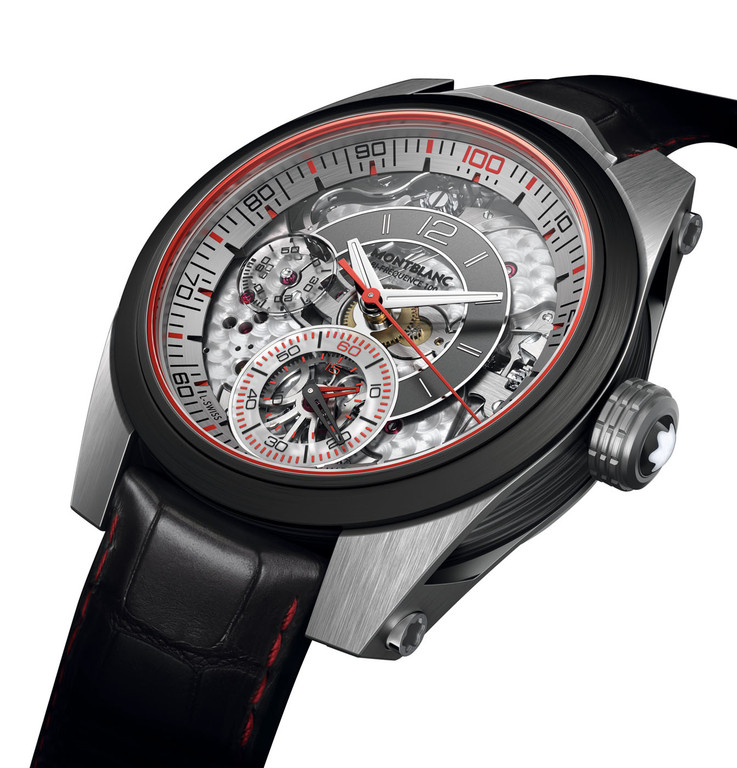 Unexpected, surprising, intriguing, these are the words which immediately come to mind when you look at such a piece.

Extremely modern outside, hyper classic Inside, this is the Watch of paradoxes.

Of course, the Jaeger-Lecoultre fan couldn't help smiling when I saw the " Chrono " 100, at its case is very close looking to the Extrem Lab, because of this blend of materials, and the shape.

But it is way much more than a Parody of the Extrem Lab.

Let's focus on some détails. 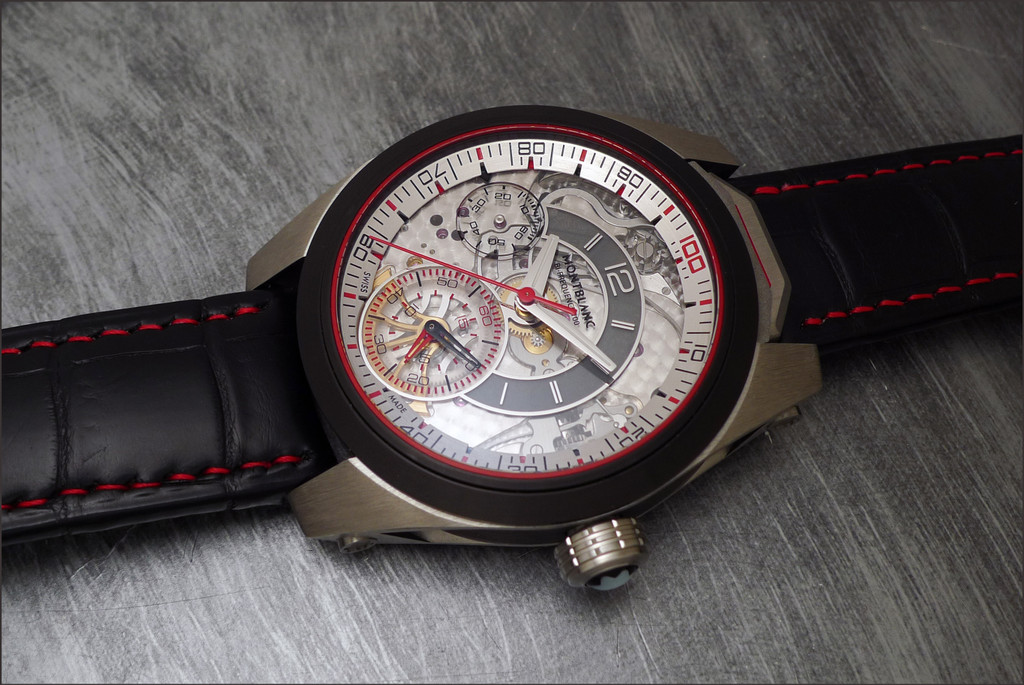 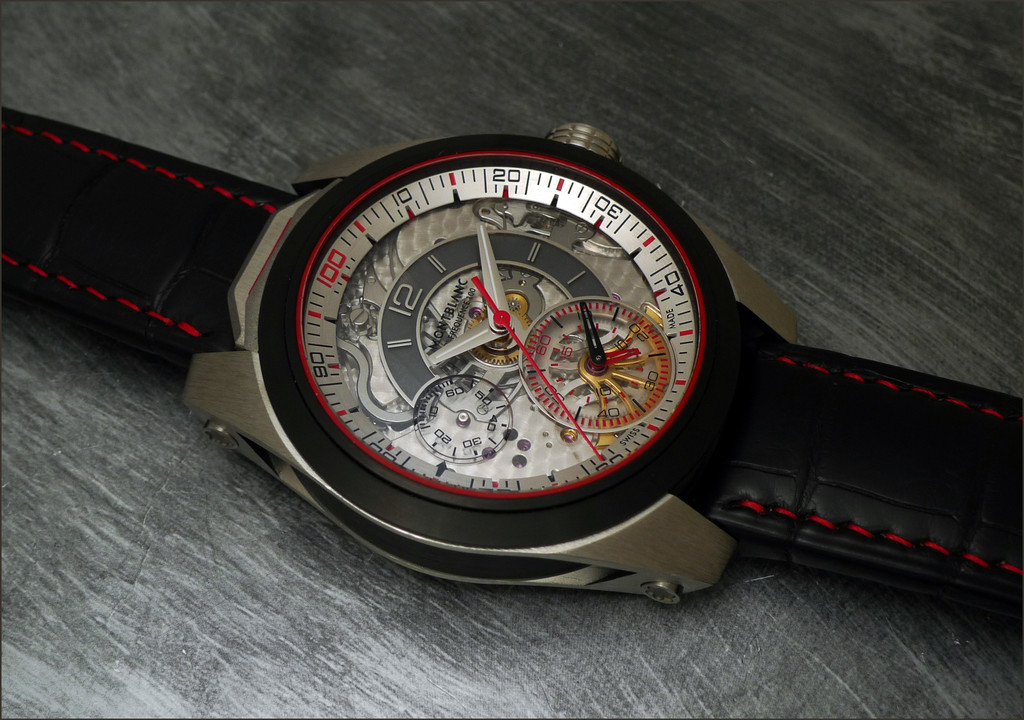 On the wrist, it is light and comfortable, with a big and pleasant presence.

Modern it is, with the use of titanium and carbon for the case, and a black DLC coated bezel.

Modernity, again, with the dial, made of... Transparent sapphire, which is an excellent idea as it allows us to have a look on the dial side of the movement, and it is really Worth it.

Unusual and original, the chronopusher... I had tought time to find it... At 12 o clock. Why? Because I've been said that it was an homage to a Minerva Stpwatch made in 1916, whose chronopusher was located at the very same place. It is generously dimensionned, as it takes almost all the space between the lugs.

The sapphire glass is domed, to add a sensual touch to this modern " horological landscape ".

The sapphire case back shows the superb Minerva Cal 66.25.

2/ The dial: Modern, sporty, chic somehow, with an original configuration: - At 9 o clock, you have the small seconds with a Arrow shaped repere which shows the eaxct second it is.

- At 6 o clock, you have a chrono monocounter, displaying the seconds, and the minutes ( 15 minutes only... Bad or good? ), but I have a soft spot for these monocounter chronographs, I must say...

- The dial of the time is centered, and " eaten " by the small second and chrono counter.

- On the outside part of the dial, a ring showing a zero to 100 graduation, just to remind you that you are in presence of a Chronograph which is able to time hundredths of seconds.

A design I appreciate a lot for its coherence. Why? Simple!

First, this Watch has been thought as a Chronograph, as soon as its conception. How many chronographs are time keepers in which you add two or three subdials, aesthetically?

Here, a particular importance has been given to the Chronograph. I would even say that I see the eaten time ring as a symbol: The chronograph is more important than the time. Which is astute and very à propos when you offer a 100th of seconds Chronograph.

The generous 1 / 100th of a second ring + the long second hand, much longer and demonstrative than the short minute and hour hands, seem to confirm the intentions of the designers. I quite like that, too!

The last point, the dial side movement, which is part of the dial... An homage to the movement. Well done, in my opinion. 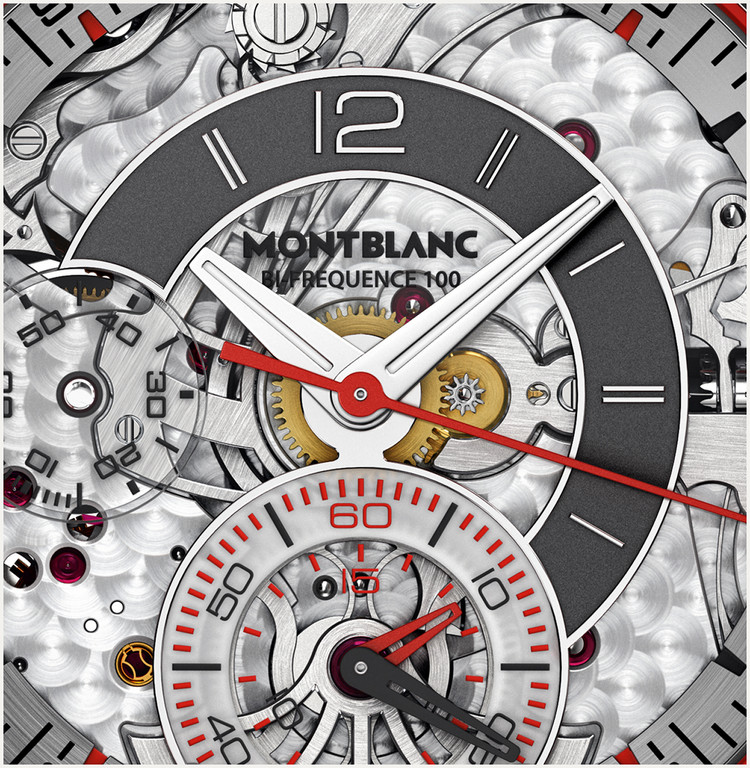 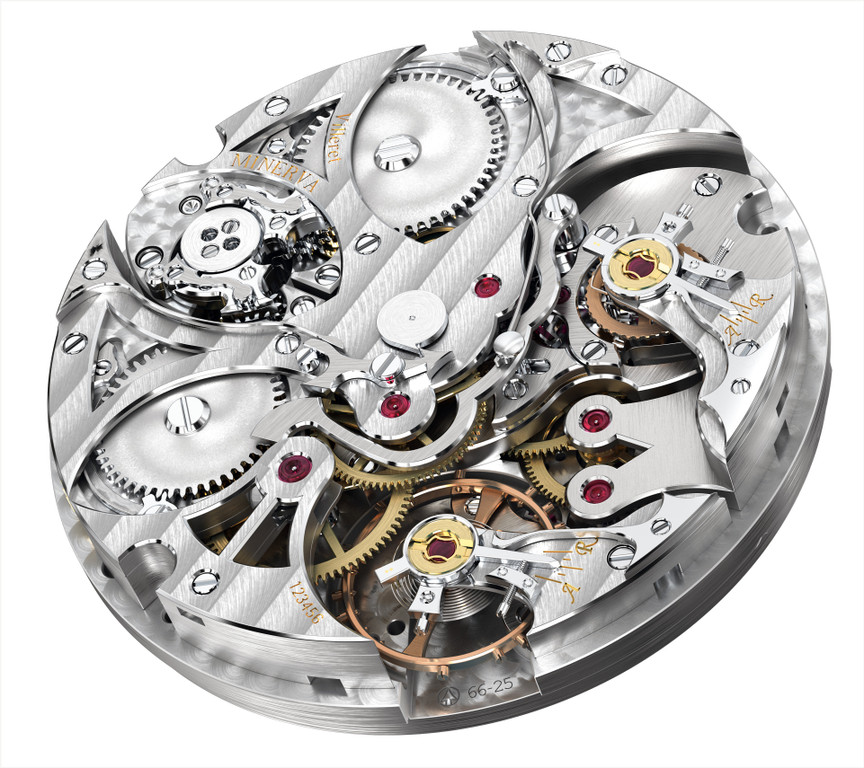 Cotes De Genève, very nice anglages, perlages, the shape of the plates and bridges, all is conform to what we expect from a fine movement. More, this is a sculptural beauty, made in rhodium plated german silver.

The power reserve of the movement is 100 hours, while it is only 45 minutes for the chronograph.

The whole movement is made of 472 parts.

Here it is as you can see it through the sapphire case back: 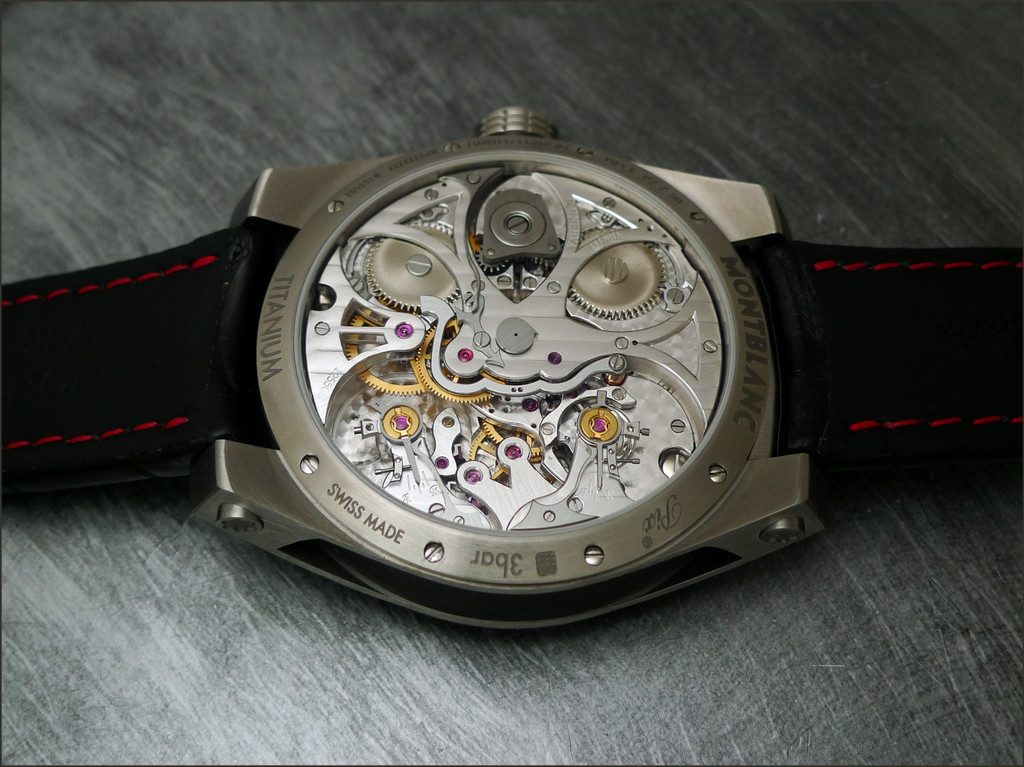 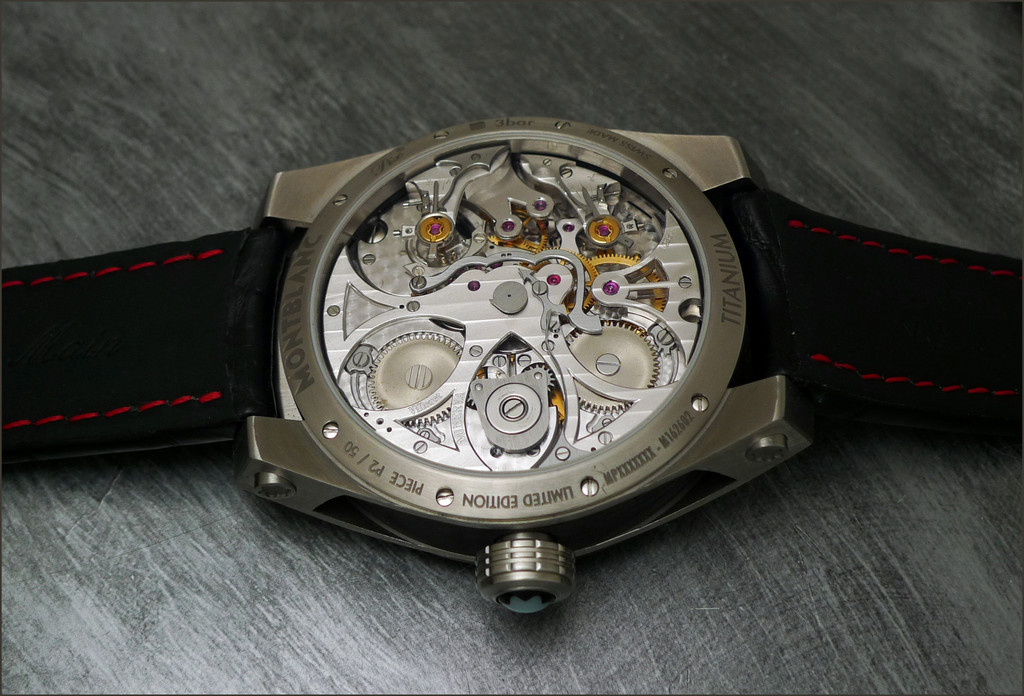 You understood it, I love this Chronograph a lot.

Because it is well thought, with a touch of Madness, a modern evocation of what was a stop Watch, a fresh and Young design housing a superb movement.

I also appreciate the monopusher original location, and the monocounter a lot.

I would have appreciated a more specific case, though, rather than this close inspiration of the Jaeger-Lecoultre Extrem Lab one ( the case and the reference ), but I am positively impressed by Montblanc ability to depict- or interpret?- Minerva classicism in such a modern way.

Two final words, to be complete: This chronograph will be limited to 100 pieces. And the retail is around 50 000 Euros.

Montblanc SIHH 2014. A view on the Timewalker Chronograph 100 Limited Edition.

By: amanico : February 2nd, 2014-00:51
Unexpected, surprising, intriguing, these are the words which immediately come to mind when you look at such a piece. Extremely modern outside, hyper classic Inside, this is the Watch of paradoxes. Of course, the Jaeger-Lecoultre fan couldn't help smiling...
login to reply

By: patrick_y : February 2nd, 2014-02:34
A modern watch for a modern world. Interpreted by an extremely and deeply rooted traditionalist company. And a true 1/100th of a second counting watch since it has 360,000 vph. Unlike some other watch companies that pretend to count to the same level of p...
login to reply

1/ 100th of a second, Montblanc and Minerva clearly know how to make them. Thanks

By: foversta : February 2nd, 2014-02:36
I tend to disagree with your first sentence! :) I remember very well the presentation made by Bartomeu Gomila 2 years ago when the TimeWriter II Bi-frequence was unveiled. And the first question I had was: but rather to start with this 1/1000th chronograp...
login to reply

Thanks for your input and for the video, Fx. Thank you so much for that.

By: foversta : February 2nd, 2014-03:45
The Bi-frequence movement 2 years ago, uncompleted: So we recognize the base of the movement of the Chronograph 100. And the Bi-frenquence and the pocket watch: Fx ...
login to reply

The Wizard of Oz is creating magic...

By: jrwong23 (aka watchthebin) : February 2nd, 2014-03:06
In this Timewalker Chronograph 100. Combining the best ideas and expertise of LeLocle and Villeret assets, the Wizard has indeed created alot of powerful magical pieces this SIHH 2014. Very impressive watch. Not just the finishing but the whole concept an...
login to reply

By: amanico : February 2nd, 2014-03:37
Well said, Robin. I think that this is a winning blend. Best, and thanks for your input. Nicolas
login to reply

Nothing ventured, nothing gained...

By: Tick Talk : February 2nd, 2014-07:34
This little brother to the Bi-frequence 1000, both in terms of price and technical specifications, is a very daring venture for MB, at least in terms of style. Can't decide if it positions closest to Richard Mille or TAG, with even a hint of the Grand Sei...
login to reply

I don't worry about the fact that the 100 pieces will find their owners, indeed.

By: amanico : February 2nd, 2014-10:24
But which pleases me is the fresh air of modernity and Madness. I find it pretty promising, for the future of the brand. Thanks for your input, Tick Talk. Best, Nicolas.
login to reply

By: Jester : February 2nd, 2014-07:40
One question though, the subdial at 6 indicates chronograph second & minute? In that case both the big red hand & the subdial at 9 indicate second for the normal time display?
login to reply

By: amanico : February 2nd, 2014-10:31
Yes, the subdial at 6 is totally dedicated to the Chronograph, while the big red second hand is the one who moves at 1 / 100 of second. There is no redondance, here. Best, Jester. Nicolas
login to reply

I didn't pay much attention on this watch...

By: tudorctin : February 2nd, 2014-09:12
Before reading your thread, Nicholas. Maybe because of the watch name… But it is a sensational watch. 360,000 vibrations per hour you can't find on every corner of the street. And the price is not so bad! I should have expected a black enamel dial for thi...
login to reply

A very honest and interesting offer, yes. And it works!

By: moc : February 2nd, 2014-10:23
to testify Montblanc new direction,blending the regular line with Villeret. Who knows if this strategy will pay back,I think so. This watch offers a lot of horological content,a reasonable price for what it is and a nice alternative to sports watches. Int...
login to reply

As I previoulsy wrote about the Heritage Chrono, History takes time to be written.

By: amanico : February 2nd, 2014-10:27
And a History to write is certainly a very exciting adventure. Will I buy it? No. I have other targets which obsess me ( us? ;) ) Does it please me? A lot! Thanks for your valuable input, my dear friend. Best, Nicolas
login to reply

Oddly, the Limited Editions Make This Riskier for Montblanc

By: bigdave : February 3rd, 2014-09:54
By proposing an edition of 100 here and 90 for the Heritage Chrono, Montblanc effectively suggests to the public that it is time for a clear trickle down from Villeret equal to 190 pieces, the equivalent of nearly 4 years' worth of actual Villeret product...
login to reply

That is an interesting point of view.

By: amanico : February 3rd, 2014-10:00
I always thought that the Limited Production was a more interesting concept than the limited edition. Even if less transparent. I am not sure it will be a trickle down to Villeret, as the Villeret family is dear to every Montblanc lover's heart, as well a...
login to reply

So many details to admire on this watch.

By: MichaelC : February 4th, 2014-18:35
I love the red ring around the crystal. A wonderful frame for a uniquely presented dial and function set. Thanks the the write up Nicolas. I sense temptation for sure!
login to reply

I love the transparency oof the dial, the play of light.

By: amanico : February 4th, 2014-22:25
There are quite a lot of détails to love, indeed. Thanks for your feedback, my friend. Nicolas
login to reply

An interesting offering from Montblanc

My pleasure, Ed. Thanks for looking.

Except the case, two veeery different watches. See the movements.

By: aaronm : February 7th, 2014-10:12
I love the back-side view, it's been clearly "designed" a bit for aesthetics, but only a tiny bit! One question, how difficult is it to operate the chronograph button on wrist? A
login to reply

Not tough to use.

What about the arrow on the dial ?

By: O. Müller : February 9th, 2014-23:37
Hi Nicolas, Thanks a lot for the report ! One question / doubt : on each & every corporate picture, the Minerva arrow can clearly be seen on the dial. On live pictures, including mine, it can't be seen. Is it a question of angle ? I did not pay attent...
login to reply

The repere for the seconds?

By: amanico : February 9th, 2014-23:42
Not only in corporate pictures, but also on mine, it is present. It may be a question of angle, indeed. Best, Nicolas.
login to reply

The two pictures on the grey background in my original post are my pictures. [nt]

You see the arrow, on my real photos? It must be a question of angles on yours.

By: O. Müller : February 10th, 2014-00:05
But I had a long conversation with Alex on that and I've been chased out of the room as the following press conference was about to start...! Quickly I took some pictures. They're all good. But those related to this piece.... :-( Too bad ! Thanks for your...
login to reply