Feb 20, 2020,18:29 PM
. . . to our new forum.  Charlie's been a community member for many years, and a familiar voice on all matters IWC.  Not exclusively, though - he spreads his wings far and wide, with examples from several manufacturers in his collection.  So while he'll be moderating this particular forum, don't be surprised to see Charlie everywhere.

Unlike everyone else in this community with a single exception, I've had the pleasure of knowing Charlie prior to meeting him here.  Not, as you may expect, due to our common interest in watches.  His first cousin is married to my first cousin; we first met in the '90s shortly after their wedding.  The next time I ran into Charlie was at a TimeZone event several years later.  Shortly after that coincidental meeting, Charlie began attending gatherings of the alphabet-soup gang.  (For those unfamiliar, our alphabet-soup gang is group of So Cal watch enthusiasts established in '05 from competing watch communities.  Our friendships transcend politics, so we don't identify with one particular site or another.)

Now, for the story.

Mitch K suggested we visit a then-new (this was back in '07) watch store in Newport Beach.  He organized a gathering that met at a local café on the pier, where we shared a meal before continuing on to the store.  Charlie was present that Saturday, along with maybe ten others.
The store was located in a quiet commercial section of Balboa Island.  We walked in en masse.

None of us could fathom what we saw.  There was literally not a watch in sight.  There were display cases and a few knickknacks from manufacturers, but not a single watch.  We were dumbfounded.
After several minutes went by, a young guy walked in from a back room.

"Can I help you gentlemen?", or words to that effect.
"Umm . . . do you have watches for sale?", said I.  There was a doubt in my mind, judging by the empty display cases.
"Uh . . . yes, but you'll have to speak with the owner."  He went into a back room, then re-emerged a few minutes later.

"My dad will be here shortly, gents - please make yourselves comfortable."
So that's the story, I thought, this is a family operation that's just gotten into business, and haven't stocked the shelves yet.  Mitch must've just heard about this place, and we're here prior to a grand opening.
The owner walks in.  Quite tall, a passing familiarity with Rory Calhoun.  He looked us over with a bemused expression.
"You guys here to see watches?", he said with a Texas twang.
One of us said yes.
"Anything special y'all would like to see?"
I piped up.  "Do you have any Omegas?"
"Sure do!", he boomed.  He went into the back.  When he emerged, he was carrying a clear plastic zippered case.  Inside, a grail Speedmaster - the white gold chronometer Professional with its white gold bracelet.
Limited edition, ca '94, #10 of 500.  My jaw must've been halfway to the floor.  I believe there was one at Omegamania, but this was - and still is - the only one I've ever handled in person.
"Ummm . . . how much are you asking?"
"How does $9000 sound?"  If only I'd said 'yes' right on the spot.  Instead, I mumbled something about having a commitment to another watch (true).  Someone in our group said, "How about Pateks?"
The Texan went into the back and returned with an armload of plastic zippered bags, each yielding a modern Patek.  Annual calendars, perpetual calendars.  Ref 5100 in every variation.  I was stupefied.

Then came requests for Blancpains, Jaegers, and Rolexes.  Out went the Texan, and back he returned with examples from every manufacturer we requested, each in its own plastic zippered bag.
Finally, Charlie spoke up.
"How about Panerai?"

Sure enough, our mysterious Texan had a good number of OP's to show us.  When he left the room momentarily, Charlie said under his breath, "One of the Panerai is fake."   That was my first inkling of Charlie's depth.  Calling out a single fake in a gaggle of genuine items is no mean feat.
Right around that moment, two young girls walked in the front door.  Our tall Texan ushered them in and said words to the effect they should go into the back and wait there until we were finished.  Towards the end of our visit he showed us a few BRM's.   After exchanging pleasantries, we left and gathered in the nearby parking lot.

That we'd just had an odd experience went without saying.  We were shaking our heads, trying to rationalize what we'd just seen and heard.
Finally, Charlie spoke.  "I think the guy's running a whorehouse."
💡
Thunderstruck, we realized he was right.  The watch store was a cover for some illicit activity (or activities).  The owner had customers, but not just for watches.

And that's the moment I began to appreciate Charlie for both his insights and ability to cut to the chase.  I'm sure all of us will benefit from his knowledge and experience, and gain an appreciation for his wit and humor.  Welcome aboard, India Whiskey Charlie! 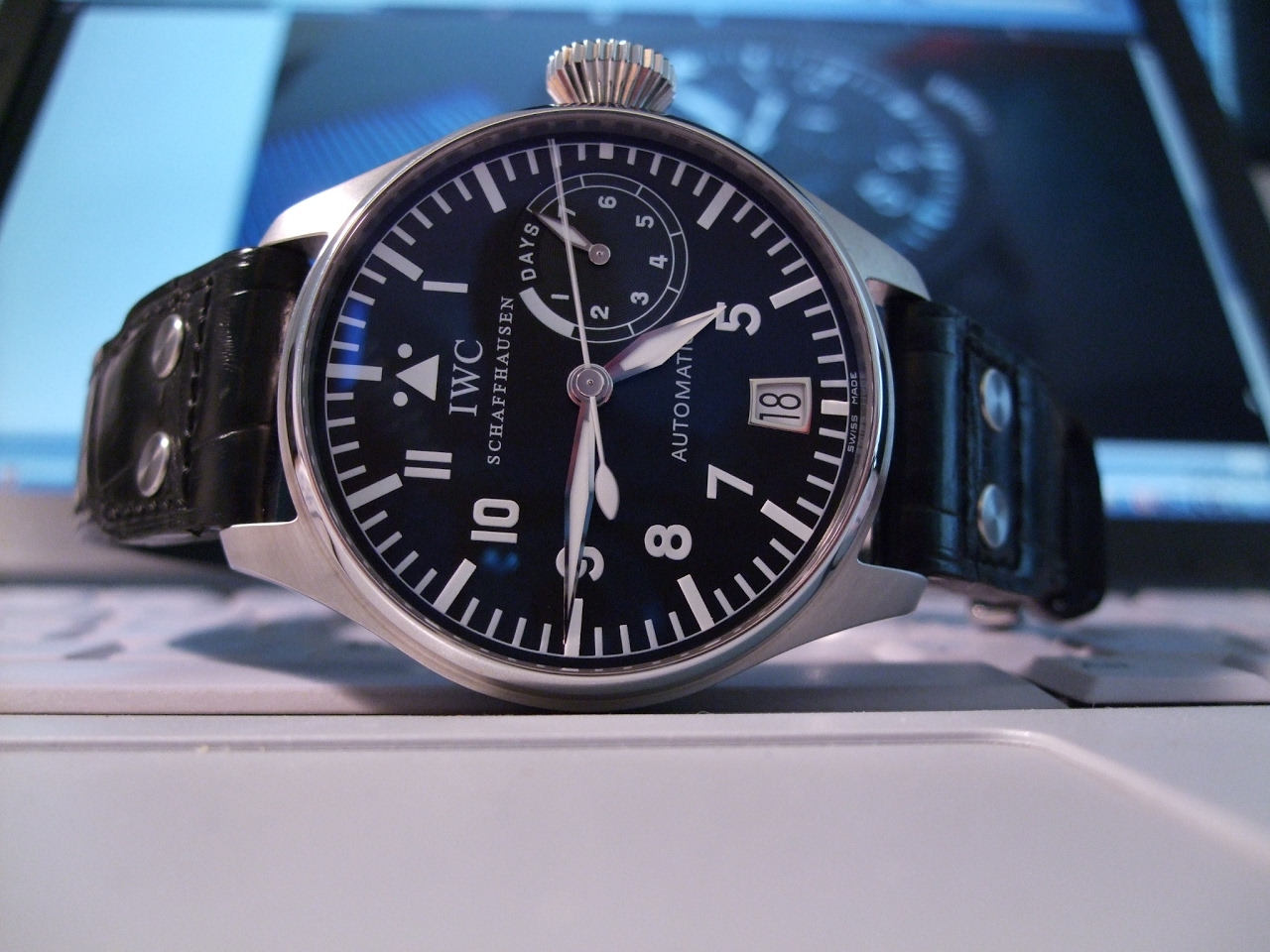 By: Dr No : February 20th, 2020-18:29
. . . to our new forum. Charlie's been a community member for many years, and a familiar voice on all matters IWC. Not exclusively, though - he spreads his wings far and wide, with examples from several manufacturers in his collection. So while he'll be m...
login to reply

By: cazalea : February 20th, 2020-18:49
That’s a pretty intensive introduction, Art! You’ve kickstarted the IWC forum for sure! Welcome Charlie. Here’s my oddest. And my oldest. Mike ...
login to reply

Great introduction and welcome on board. [nt]

I have known this gentleman many years. A most deserving addition to the Team!

By: MichaelC : February 20th, 2020-20:03
BIG congrats to you Viken. I look forward to learning more about this great brand!
login to reply

By: Ted-Lo : February 20th, 2020-21:42
And thank you for the new forum. Too bad I didn't know any of you back in 2011. I used to fly to Newport Beach every week for a client for about a year and a half. Well, I actually flew into LAX since there were no direct flights to Santa Ana from Philly....
login to reply

Haha Art you have got my full attention with that story. Welcome IWC....

Welcome Charlie and I.W.C. sorry i posted on this as i missed this announcement.

By: India Whiskey Charlie : February 21st, 2020-07:00
I made such an impression on you, Art. That is quite a story and thanks much for the introduction to this unique community. And thank you all for the warm welcome as a moderator for the newly established IWC forum (thank you, Bill😉). Some of you know me f...
login to reply

Superb story, Art. But the good news is this new sub forum dedicated to IWC and our dear I.W.C arrival in the Mod Team! Congrats, my friend and good luck in your new functions. [nt]

That’s a story. Congrats Charlie on the new gig! [nt]

A cordial welcome to I.W.C.!

By: MTR : February 22nd, 2020-13:58
It has been a long journey for me to find the right one in perfect and unworn condition. But I think it’s feasible if you are patient enough. Best Thomas
login to reply

Great story, sounds like the beginning of an Tarantino-movie. IWC welcome and all the best as a mod. [nt]

Wow!! That´s a Great introduction dear Art!! ... What a great story! Big Congrats Charlie on your Mod position here!! Always a pleasure to read your posts I´m sure you´ll make a great...

By: Subexplorer : February 22nd, 2020-09:40
... job moderating the new IWC Forum! This most important brand surely deserved its own place! Good Luck! Cheers! Abel One of my IWC says hello and Welcome!! ...
login to reply

You got the México edition my dear friend??? [nt]

No dear Rene. This is an edition for ...

LOL! Leave it to a Richemont company...

By: India Whiskey Charlie : February 25th, 2020-13:19
To introduce a limited edition model and then reintroduce it again in almost the exact same specs but not limited edition: www.iwc.com ...
login to reply

Agree dear Charlie. Regret to say that IWC is not the only brand to do that. Anyway the novelty in this "Latin American" edition of 50 watches is that the complication is ...

Right and that's why I wrote Richemont and not IWC specifically...😉 [nt]

By: renerod : February 26th, 2020-09:19
I’m sorry. My confusion is due to the fact that It was presented at the SIAR, so I might have thought that it was a special edition for México. Thanks for the clarification my friend. Regards. René
login to reply

A top moderator for a top manufacturer. Thank you Art for the introduction. [nt]

By: India Whiskey Charlie : February 22nd, 2020-13:50
She got a bracelet for it and she loves her renewed watch. I'll try to get a photo and post it soon.
login to reply

By: cpbmd : February 22nd, 2020-13:01
Do you know where I might be able to locate a 5002-001 ? It is the first Big Pilot. I would love to acquire one. My AD in Boston says they don’t exist in any number in the secondary market. Are there any IWC ADs that night make a market in preowned Big Pi...
login to reply

By: Dr No : February 22nd, 2020-13:09
. . . you can ask for one: our Collectors Market. Post a W ant T o B uy request; if you receive an offer from an established community member, chances are you'll be able to make a fair transaction. Art
login to reply

Okay. I did not know about that part of the forum.

From the main page:

Many thanks for this great story Art

Congrats! and so happy we have a IWC forum now [nt]

By: Makilla : February 25th, 2020-13:25
Here’s a special way to join the forum BP “Safari” which i rarely wear but looks great every time it’s on Can’t get enough of these watches Laurent ...
login to reply

Very special indeed! So looks like you have one as well ;) [nt]