So, the 3H Bund - a classic for me for its tough and utilitarian appearance - but these models are now destined to be worn not for their intended purpose any longer, and just a nice (all be in only some peoples eyes) dive watch. Oh how I wish for one that can be used properly!!

I was aware that there rumors of a civilian version - non 3H dial, non fixed lugs, uni-directional bezel - but apart from seeing a small low resolution picture once, had been under the impression it didn't exist, and as I'd seen on online market places, I figured the rumor was a good method for forgers to redial Squale watches, in the hope that the thickness of the case wouldn't be noticed.

Then the Blanpain exhibition revielled one! so not such a rumor after all!

Without stating the obvious, the military issued one on the left, has seen a much harder life, as will be seen in all the photos that follow!! I believe thier ages to be similar-ish, although the civilian is absolutely immaculate - the time that the lume will last for after charging is the same as the 3H - pretty much non existant! 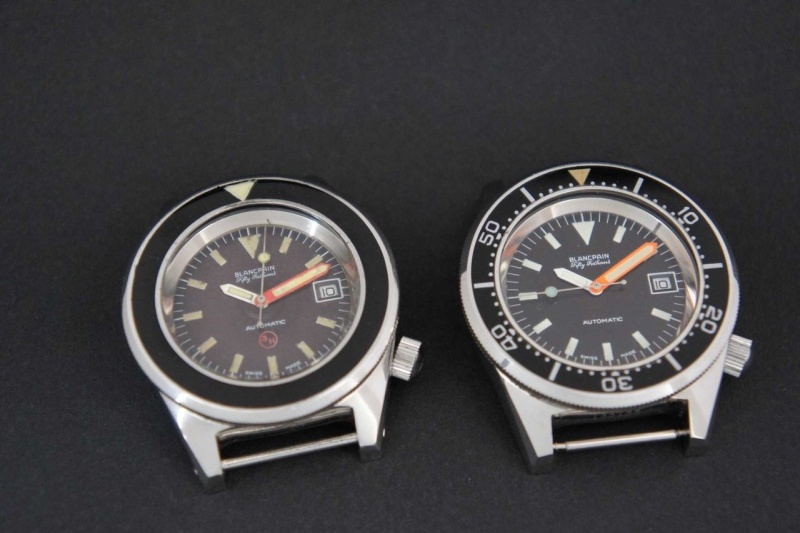 Looking from 6 o'clock, its obvious by the numbers that the military issues where the prime intented customer for this watch, and I suspect the civilian versions came later. The civilian in the exhibition had an number similar to this, in the one hundred thousand region, and all of the 3H's were in 1 thousand range like my one. 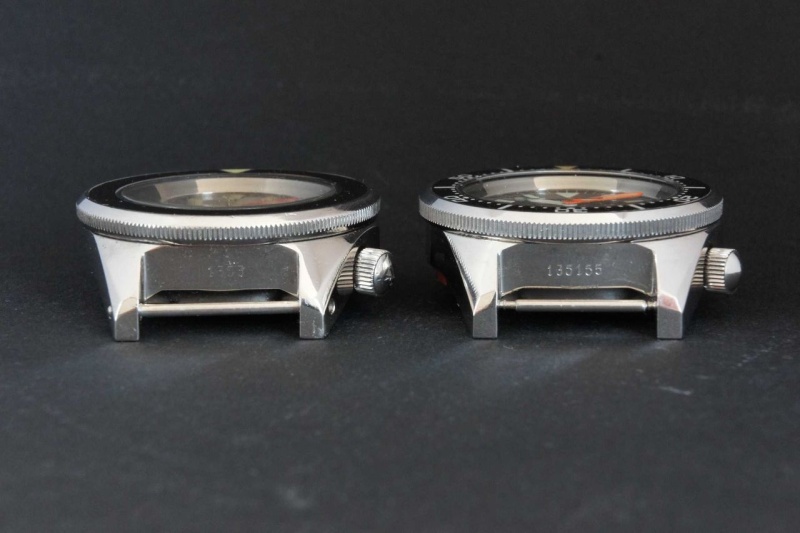 Remeber what I said about the hard life for the military issue - the edges are considerably more worn than the civilian. As Brian had said once he finished his search, he had found the absolute cleanest example he could!! And it is very very clean. You will probably see white spots on some of the shots of the dial. This is fluff / dust, didn't notice until after downloading the photos!! Typical! 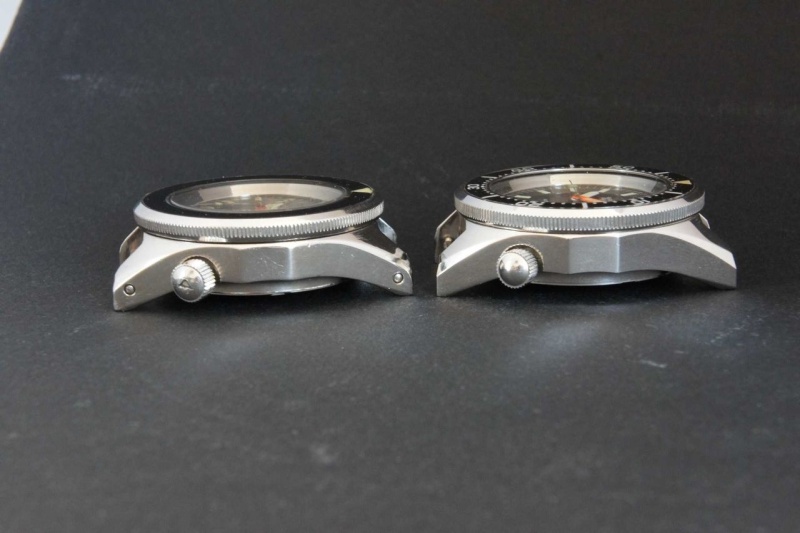 Stacked on top of each other. I love the fixed strap bars of the 3H!! 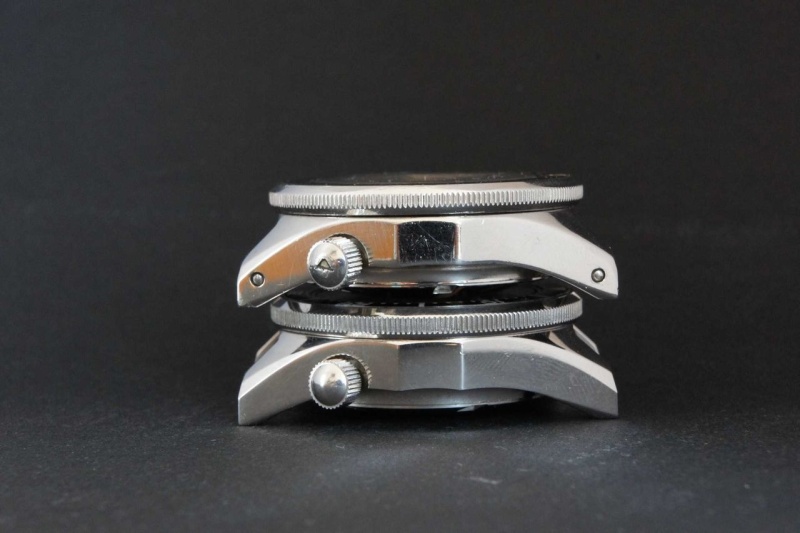 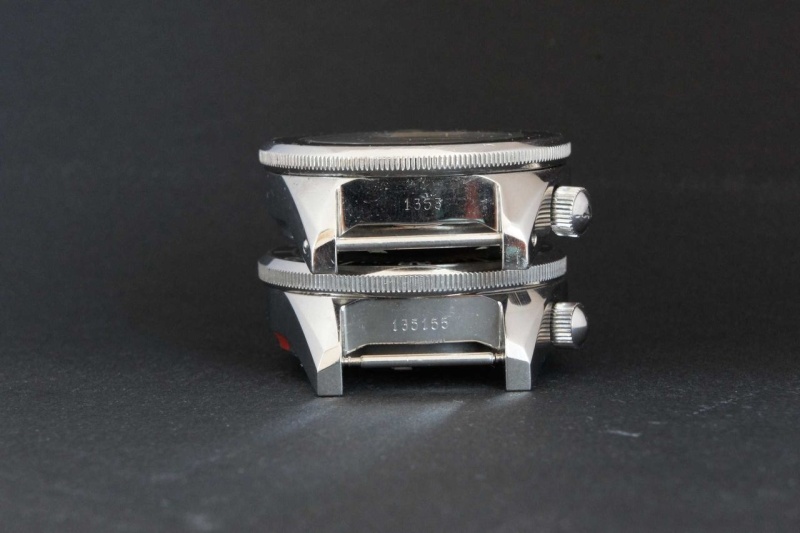 And a view from the 9 o'clock side, just give you all angles!! 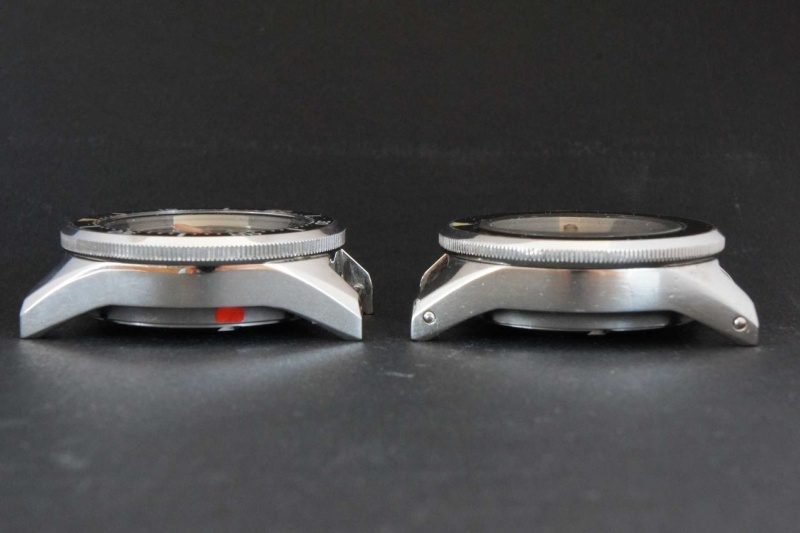 This side by side gives you a good comparrison of the dials and hands. 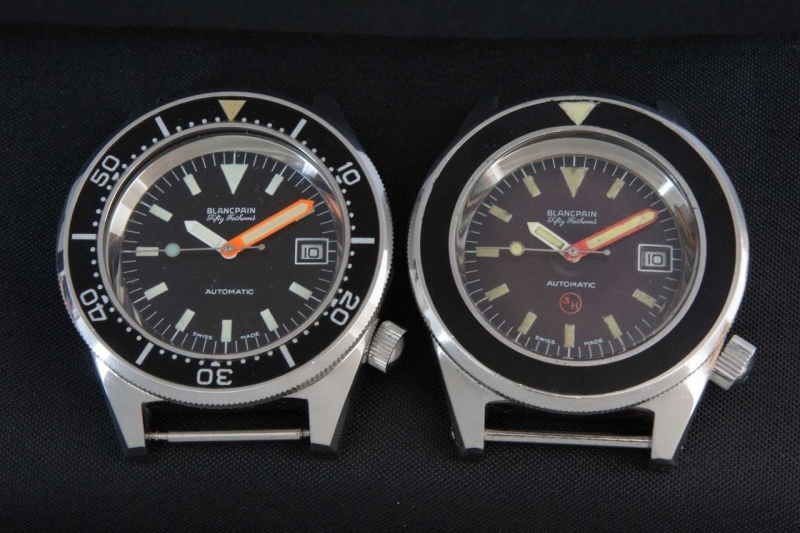 More shots with the dreaded dust!!!and yes, crowns are out, neither watch wound up! How did I get the seconds to light up I hear you ask, well the 3H has a neat trick, with just a slight wiggle to get the second habd going, you can make it go backwards by turning the crown to move the hands anticlockwise!! Probably not a good trick, and an indication that its well worn, but, hey ho!! 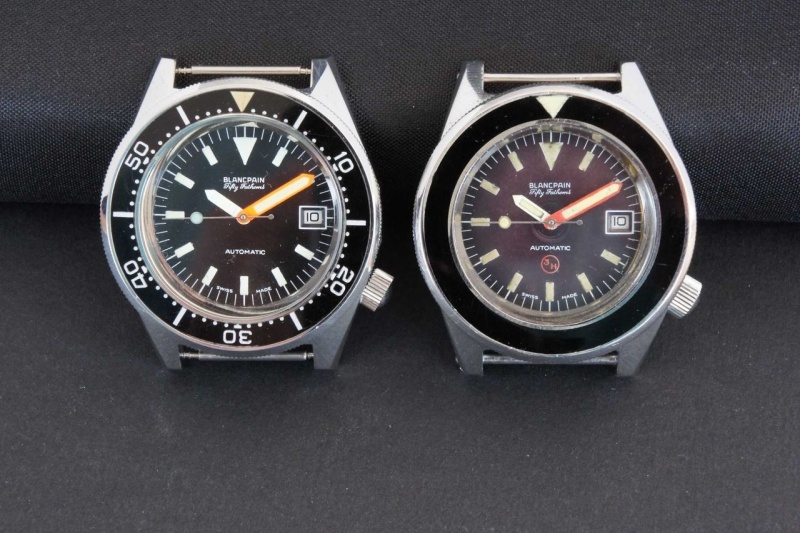 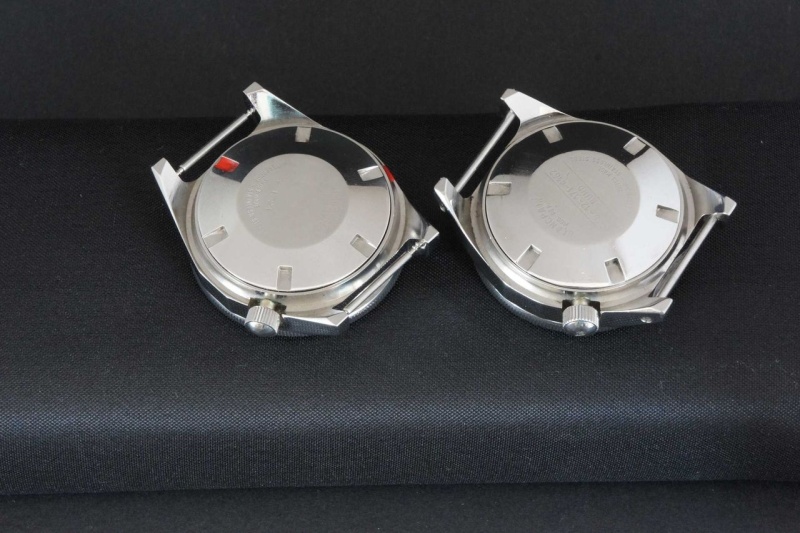 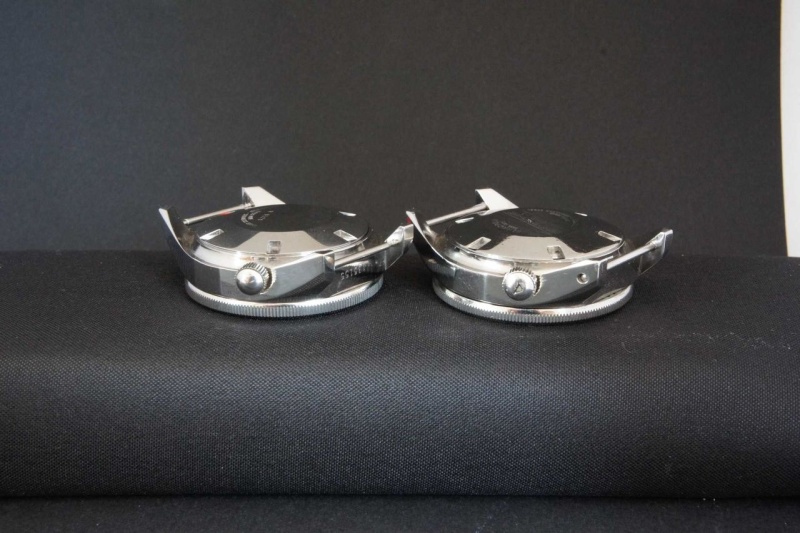 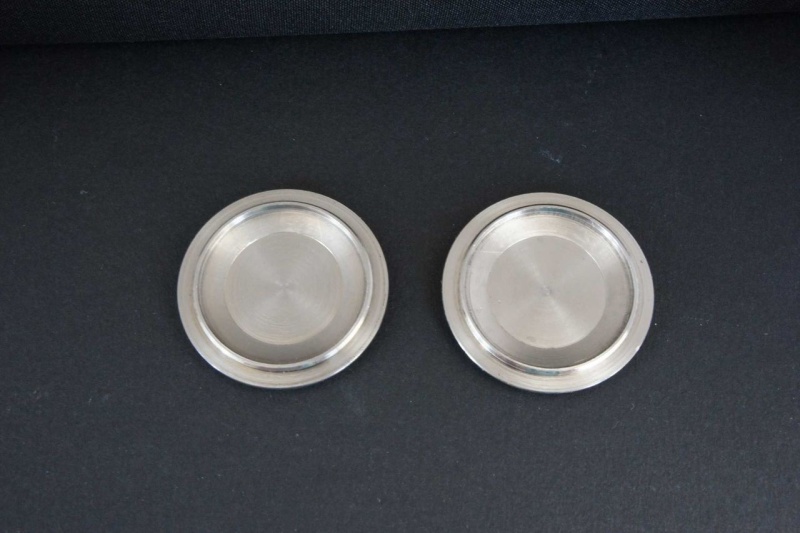 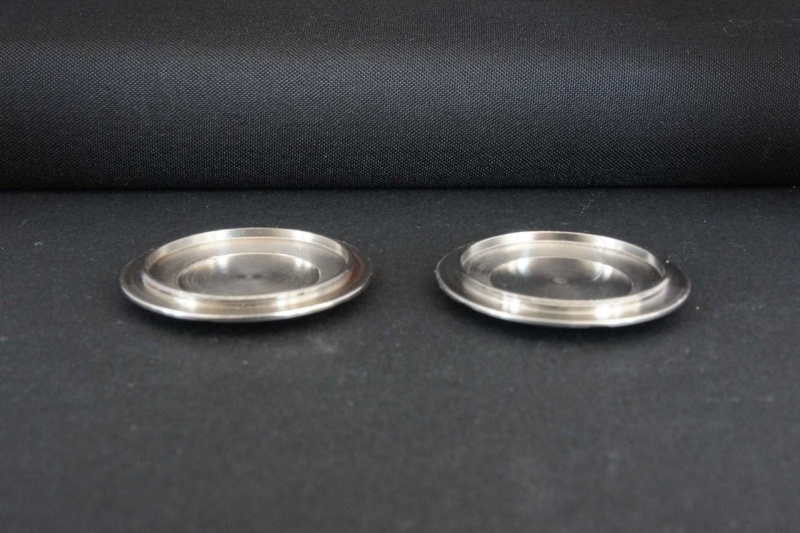 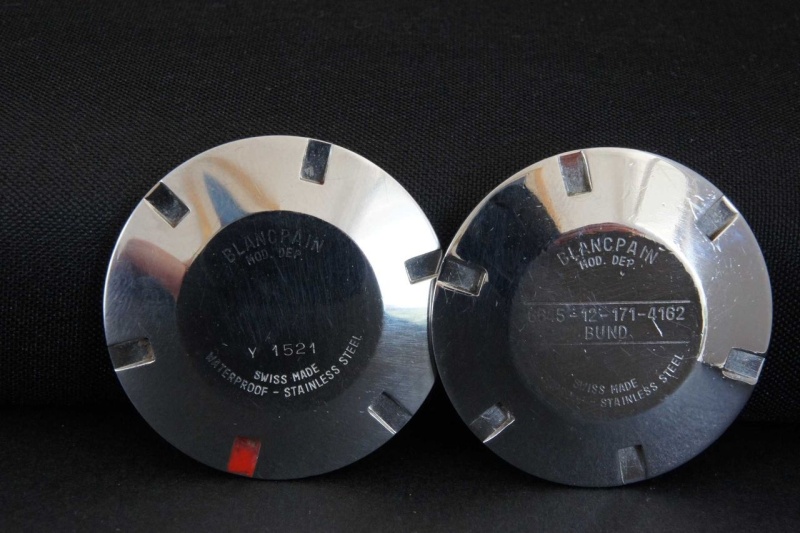 OOoohhhh, nice. Well, admittidly not as nice as an AS, but still.... Military issue on the left, with the reference to its Bundeswher military spec stamped on the oscilliating weight. Oh, and missing a retaining screw for the movement ring! 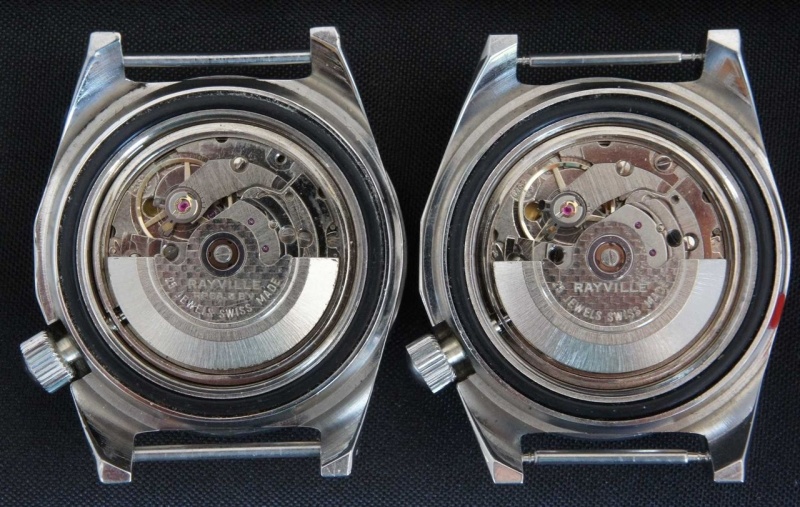 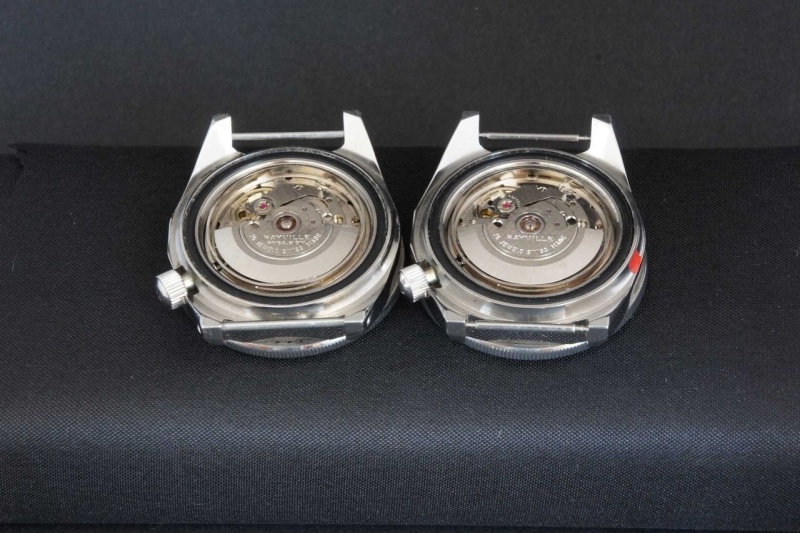 And to finish off, a shot of the straps I'm currently using them on.

The Military issue is gaining time - about 1 1/2 minutes a day, and the civilian is just fine.

Now I've taken some photos of its internals, thats the o-ring greased, back screwed on nice and tight. Next stop, get a wee pressure test and then its ready to use. And use for its intended purpose too!! 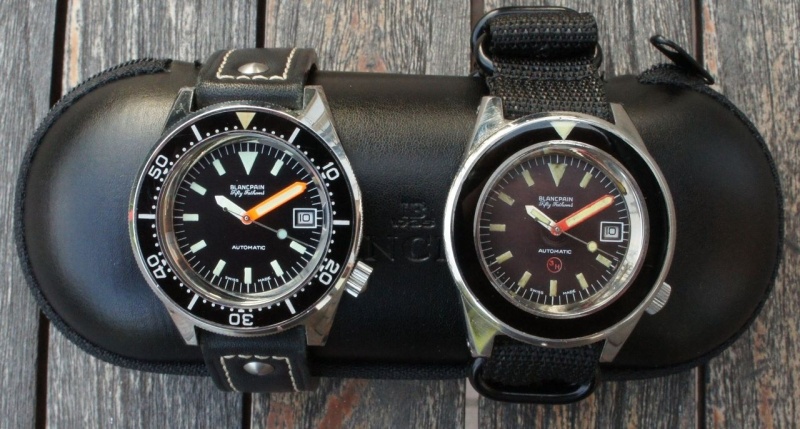 And thats it. These aren't everyones idea of the perfect vintage Fifty Fathoms, but I think they do have a place as a true piece of the Bp FF history.
Hope you enjoyed it.
Cheers Tony

By: DivingT : October 20th, 2011-13:07
So, the 3H Bund - a classic for me for its tough and utilitarian appearance - but these models are now destined to be worn not for their intended purpose any longer, and just a nice (all be in only some peoples eyes) dive watch. Oh how I wish for one that...
login to reply

They do have a place, indeed. At least the Bund.

By: amanico : October 20th, 2011-13:43
I am considering one of these, my friend. In fact UI would like to get a No Rad Bund, and this one, to make the pair. Superb article on a watch which is not often mentionned, when we speak about Vintage FFs. You filled a gap, thank you so much for that. B...
login to reply

By: Briandumais : October 20th, 2011-19:29
Tony Its great to see them side by side. I have always wondered what came first the military or the civilian. I suspect it was the military. They are great big watches and i think the Bund is one of the most undervalue military watch on the market! Glad y...
login to reply

I too think that the Military came first. But it is just a guess.

I think your definetly correct...

They will give it to you, at the Paris Boutique.

By: amanico : October 20th, 2011-23:05
I may have to go there, too, to get an english copy. I'm sure you will enjoy the reading, even if it is more about Stephan Ciejka and his personal journey into this FF world. But the guy is really interesting. He did an awesome job when nobody, or almost,...
login to reply

By: DivingT : October 20th, 2011-22:41
You'll get see this one (in fact the whole family), again on monday. May be seeing the 3H again will tip you over the edge to start the hunt!! best, cheers Tony
login to reply

Time for a family picture, Kyle. ;)

By: DivingT : October 20th, 2011-22:45
..and of course a stunning 3H as well! How well does yours keep time? and do you have the funny second hand thing that I mentioned mine can do? And yes, I agree with Nicolas, lets start getting some family shots!!! We must have a lot between us all! cheer...
login to reply

By: BDLJ : October 24th, 2011-16:43
...I missed this post, Tony. Congratulations. Can't wait to see it in the water. Having made a couple of oldies dive proof (well, I now have a rule - those old things on single tank dives only - limits the depth/time and I don't really need it as a back-u...
login to reply

Good point - can anyone confirm....

By: DivingT : October 26th, 2011-03:33
Good point Ben, thanks. Can anyone confirm that the these crowns on this ETA movement is released by pushing in on the small pin where the crown enters the movement? and is it best with this movement to release the crown and stem with the crown in (windin...
login to reply

By: BDLJ : October 26th, 2011-04:52
I've usually done it from setting position...but please can someone less clutzy than me chime in. I've never thought about it that much, if the stem doesn't take properly, I just sigh a lot, pace around and resign myself to hands/dial removal.... As for t...
login to reply

Here's the photo of the 'pin'

By: BDLJ : October 26th, 2011-15:47
...one. I much prefer pins to a screw (that didn't sound right ). Unscrew the crown. move to setting position, then while pulling slightly on the crown slowly depress the 'pin'. No need to push it right in or anything like that. You'll feel the resistance...
login to reply

By: Ubik : October 25th, 2011-06:53
Very nice to see a comparison of them side by side. I have a distant memory of you doing the same next to a Squale. Are the Sqaule cases identical to the Blancpains?
login to reply

By: DivingT : October 26th, 2011-04:20
Thanks Ubik, And I do have some photos of this civilian beside a squale, and you'll see that the squale case is ALOT thinner. So although the principle of the cases are simmilar (same original Case manufactor - C. Von Buren), the specification / size is d...
login to reply

By: Ubik : October 26th, 2011-10:54
So the Blancpain case is unique? Are there any markings to identify the case maker?
login to reply

By: DivingT : October 26th, 2011-14:18
Hi there Ubik, Here's a series of pictures of a Squale compared with the civilian bund type. The Fifty Fathom is top (except for the last shot !) Sorry guys, another post full of photos, but I believe they are better than me trying to explain..... And her...
login to reply

By: BDLJ : October 26th, 2011-15:37
..comparison photos, Tony. One thing I did notice was that the 3H appears to have a very slightly different bezel to the civilian. If you take a side-on view, the knurling is narrower. A trait shared with the Squale you've shown.
login to reply

By: Ubik : October 27th, 2011-09:38
thanks for posting. I had always assumed that the cases were identical. In fact they seem unique to Blancpain, while the other companies cases are the same - or at least seem so from online pictures.
login to reply

Thanks Matt, glad you enjoyed!...