Not really what I call a fine watch, but certainly a cool watch, with a big presence and a lot of character.

This 30 CH is one of the last ( I think there was another one, after this Diving Chrono ) in house chronograph, before the Valjoux slippery slope, and the beginning of a less glorious chapter of Longines History.

Its case is big for the period, with a diameter of 40 mm.

The dial has a stunning " red cross hair ", and an oversized minute subdial.

The red bezel is another interesting detail, on this Chronograph, without forgetting that it houses of f the finest chrono movement. 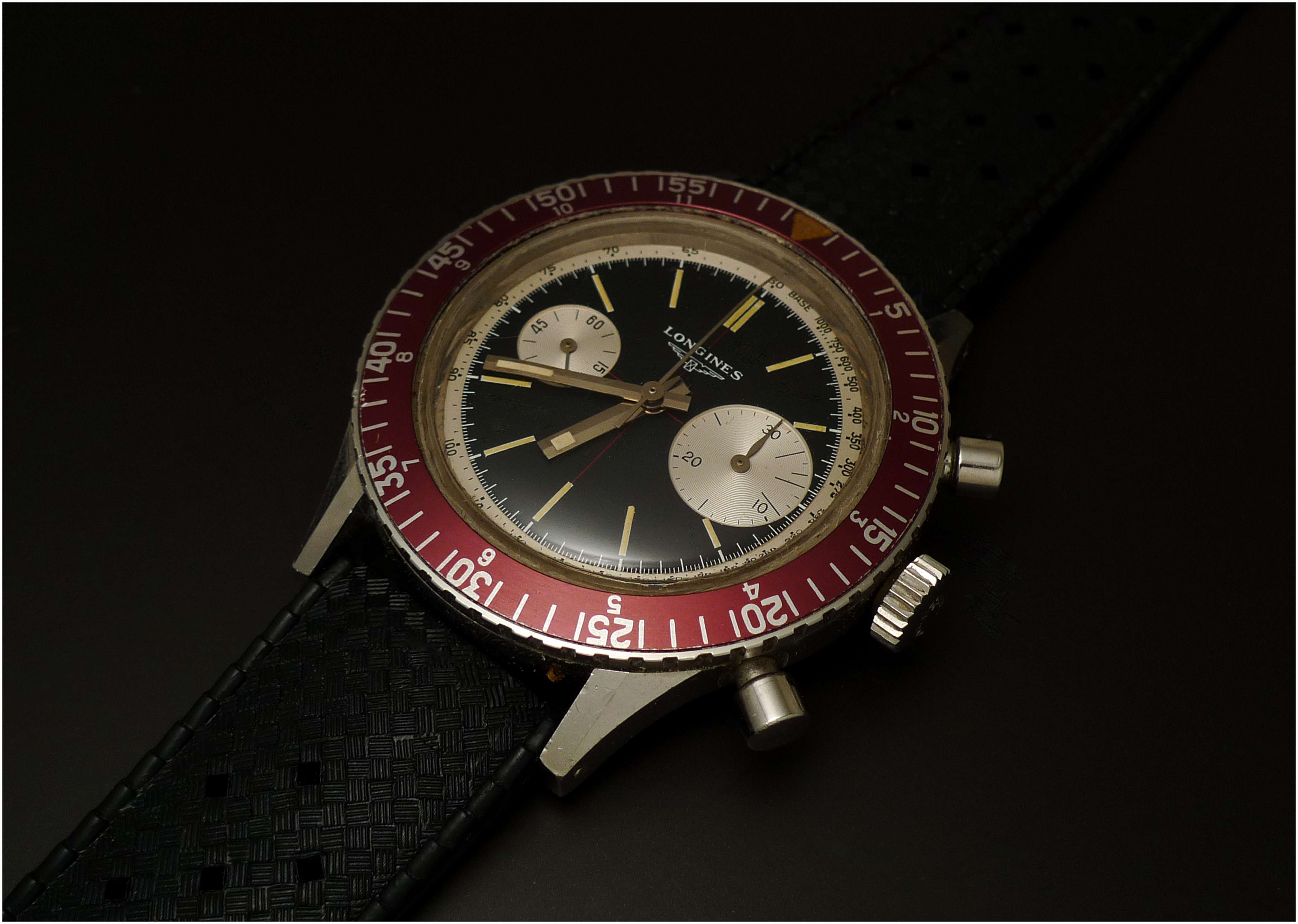 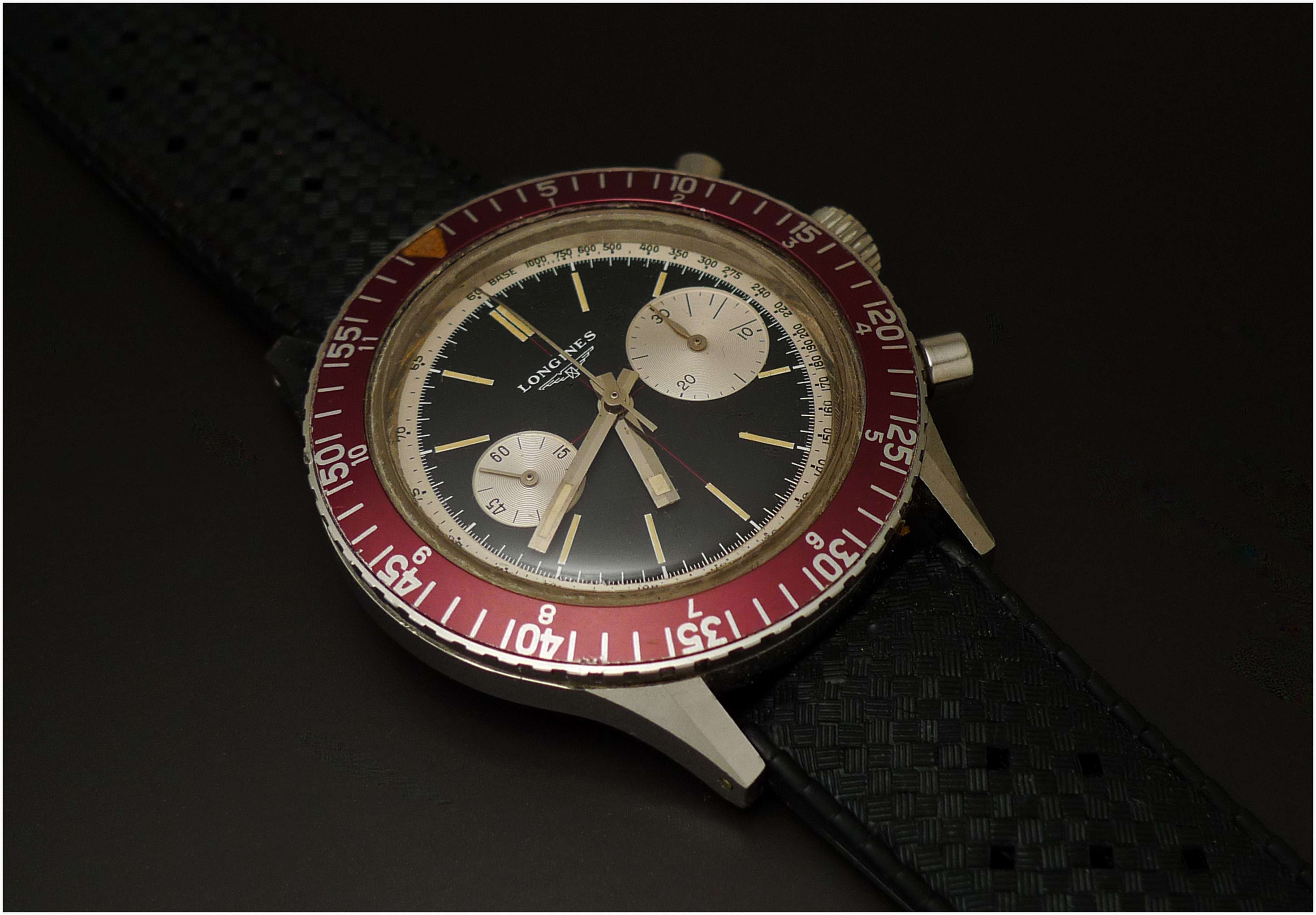 It doesn't have the class and the distinction of a 13 ZN or other 30 CHs, but I think it has its interest in a collection of fine chronographs.

The good news is that it is not too difficult to find and still affordable for such a quality watch...

Still, I am hunting it, without being able to put my hands on it!

By: amanico : March 28th, 2013-06:59
Not really what I call a fine watch, but certainly a cool watch, with a big presence and a lot of character. This 30 CH is one of the last ( I think there was another one, after this Diving Chrono ) in house chronograph, before the Valjoux slippery slope,...
login to reply

By: nilomis : March 28th, 2013-10:00
Of the Longines chronograph movement. I know that everyone here loves the 13ZN but I prefer the 30CH because of a single "modernity" that is the shock protection. This one that you show here is a little funky (the red bezel) but it carries the symmetry an...
login to reply

By: amanico : March 28th, 2013-11:51
And the breathtaking detail or information is the incredible variety of 13 ZNs and 30 CHs. I don't think it is possible to build a collection on this theme, which is way too wide. This one, the Diver, I mean, is breaking the code of classicism which is ex...
login to reply

Thank you so much for these very valuable informations, Suitbert.

By: ztirual : March 29th, 2013-12:28
Hi Suitbert, Many thanks for this precision. Does it look like something like this claw-like device? Credit P. Boutros for the second picture Do you know whether this form for primitive protection appeared on other models/ watch brands or was it proprieta...
login to reply

By: SuitbertW : March 29th, 2013-12:54
Hi, Yes, that's it. You'll find it implemented in many Longines calibers oft that period. As said, trademark is 'ShockResist', don't know which supplirr made it, but will check that. Btw, it's far from beeing primitive, :-) -it's just an early, I'd guess ...
login to reply

By: nilomis : March 29th, 2013-13:59
I never paid too much attention to this very important detail. Thank you very much, Nilo
login to reply

Absolutely. But it seems that the Wittnauer cousin has a less interesting movement. ;)

Thanks a lot for the great pics.

I totally understand your opinion. There were much nicer Chronos, but not cooler. ;)

By: G99 : March 28th, 2013-14:02
i wonder if they will ever recover the status they had in the 50's and 60's? will they ever make another in house calibre or will they stick with ETA, Valjoux and Valgrange? if Omega can do it and rise again from the doldrums of ETA to making excellent in...
login to reply

I fear Longines will never get this glorious past, as long as they belong to the Swatch

By: amanico : March 28th, 2013-14:39
Group. There are other brands which reperesent the horological side of this Group. This is not fair, in my opinion, as Longines had such a prestigious past! Best, my FQ friend. Nicolas
login to reply

Yes, I need one like this, to get an original version of the 30 CH, AND

Well, I think there was another one, in a more conventional case, big case.

By: amanico : March 29th, 2013-11:56
Eitan has a photo, if I remember well... Agreed on your points, my friend. Some bands released Diving Chronographs, in the same era. I immediately think about the JLC Shark, for example; But this Lo,gies is really something! Best, And Thank you! Nicolas
login to reply

By: ztirual : March 29th, 2013-03:06
Fab Matts! with reference to my previous message just above yours, this is yet another case of one picture saying it better than 1000 words. Many thanks for sharing this. Z'
login to reply

thanks for sharing... this one looks appealing to me :-)

Please, don't tell me we have the same target! It would be some bad news for me, as